PAISAJE INVISIBLE: The fight for justice after the revolution. 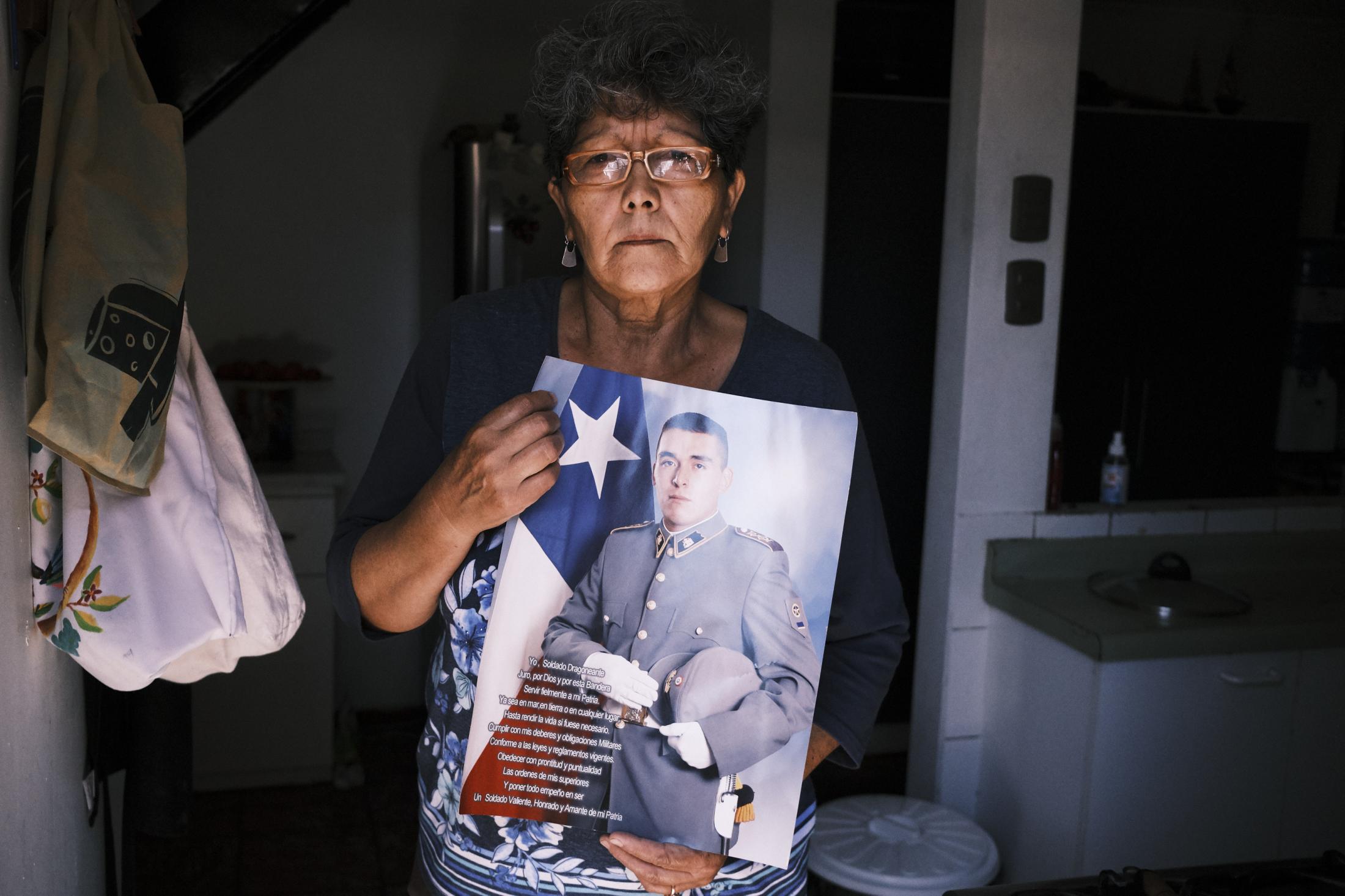 Santiago, Chile, 2020. Alicia González, holds her favorite picture of her son Danilo wearing his military uniform. She explains in an interview: “Danilo was not a delinquent. He was going to work and made a mistake. He should be alive but instead was murdered by the government's hitmen who pretend that wearing a uniform gives them some power. I want justice.” During the night of March 4, 2020, Danilo crashed his car into a police patrol car at a tollbooth station. An ensuing argument ended with Danilo being shot and killed by the police. Later videos from witnesses show how after the crash, cops put handcuffs on Danilo, and while he was on the ground begging for his life, one fired his gun at him. 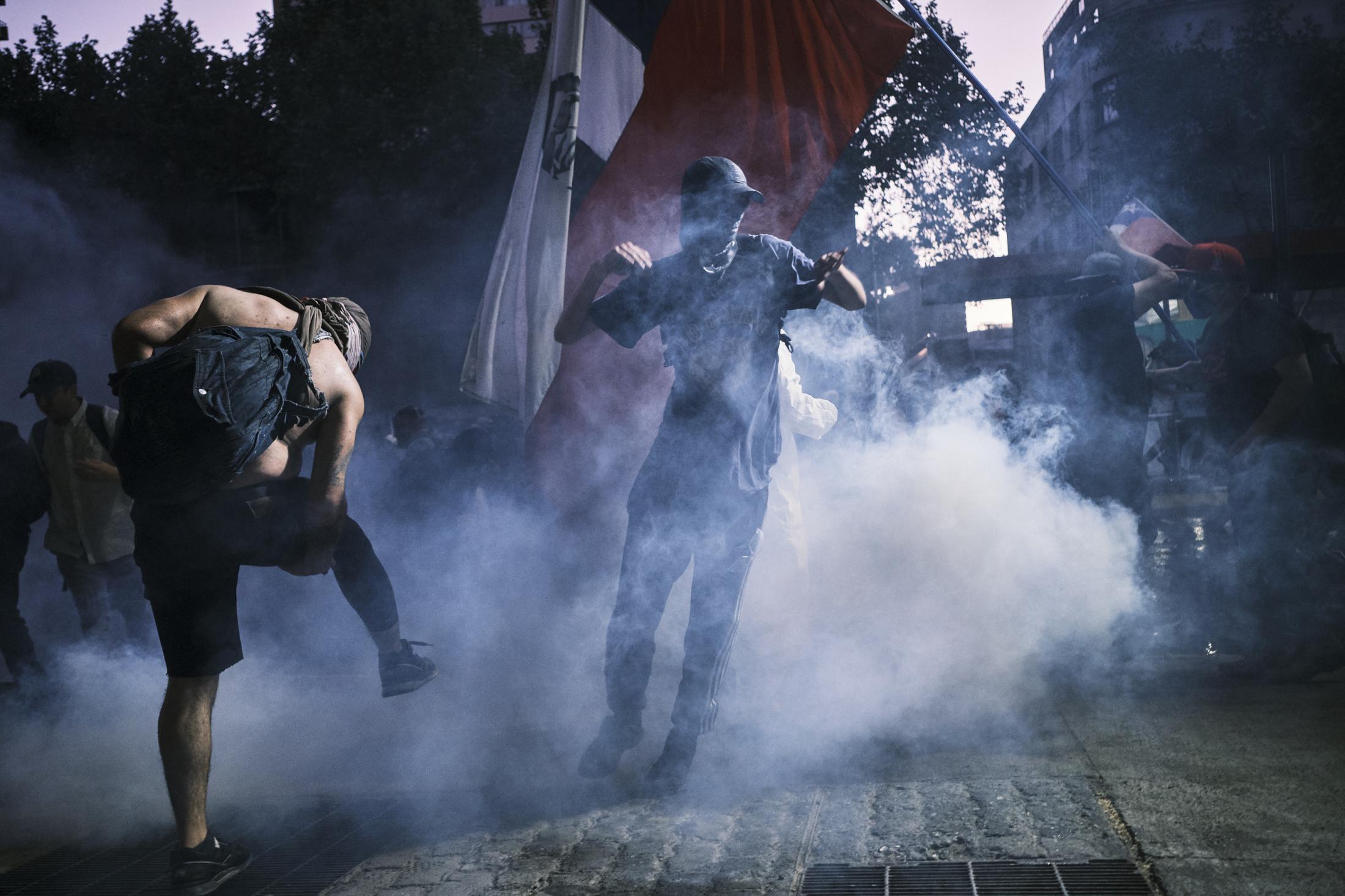 Santiago, Chile, 2020. A group of protesters is hit in the body with tear gas projectiles. Since 2019, there have been 1,334 official complaints of wounds from gunshots, teargas, and rubber bullets by police forces. 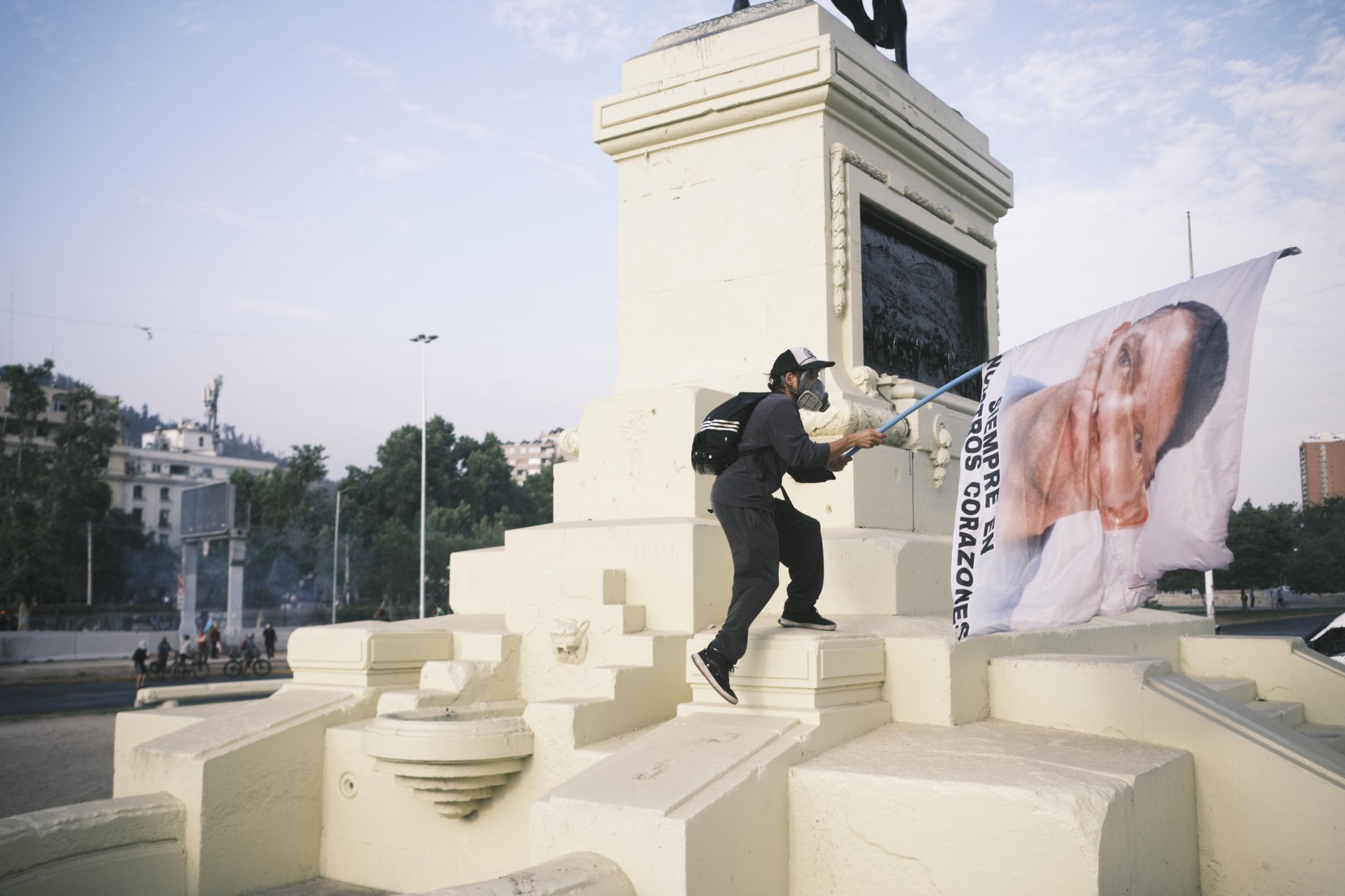 Santiago, Chile, 2020. Marco Valdebenito, the brother of the dead protester Cristian Valdebenito, was seen as the first protester to climb the monument at Plaza Dignidad during another day of manifestations after the referendum. Marco and Cristian both grew up during the dictatorship as activists and protesters.

Cristian was hit in the back of his head by a tear gas grenade and died hours later in a public hospital. There has still been no investigation, despite the available technical information of which police squadron was in that place that day. This monument is cleaned and repainted during the curfew every night after a protest occurs. 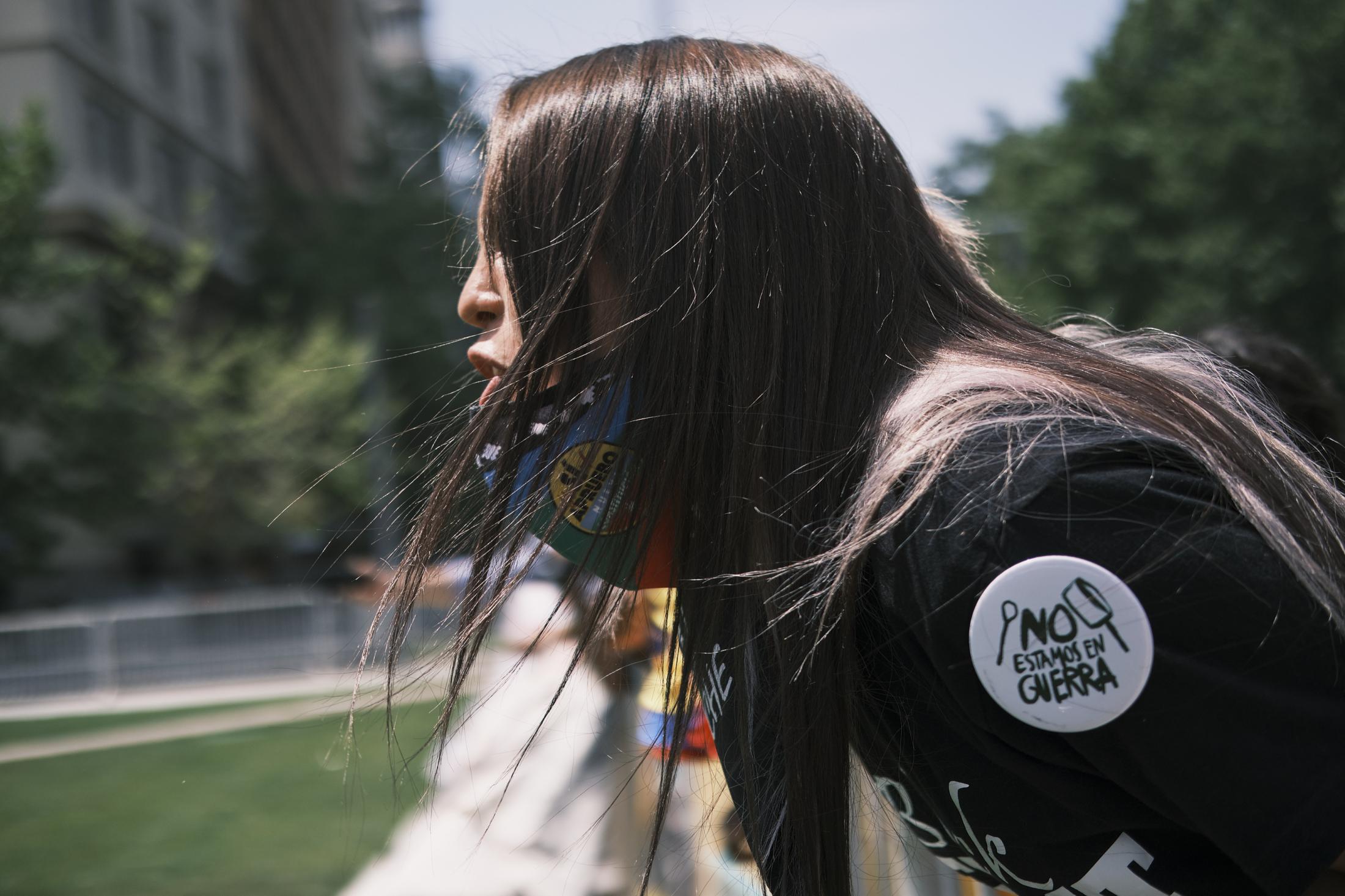 Santiago, Chile. 2020. Francesca Escudero, Romario's partner and mother of his daughter, traveled to Santiago to protest outside of 'La Moneda,' the Presidential palace, in an attempt to demand justice on their case. The army officer who shot Romario is still on preventive detention, but the defense got to postpone his trial more than three times since the investigation started. 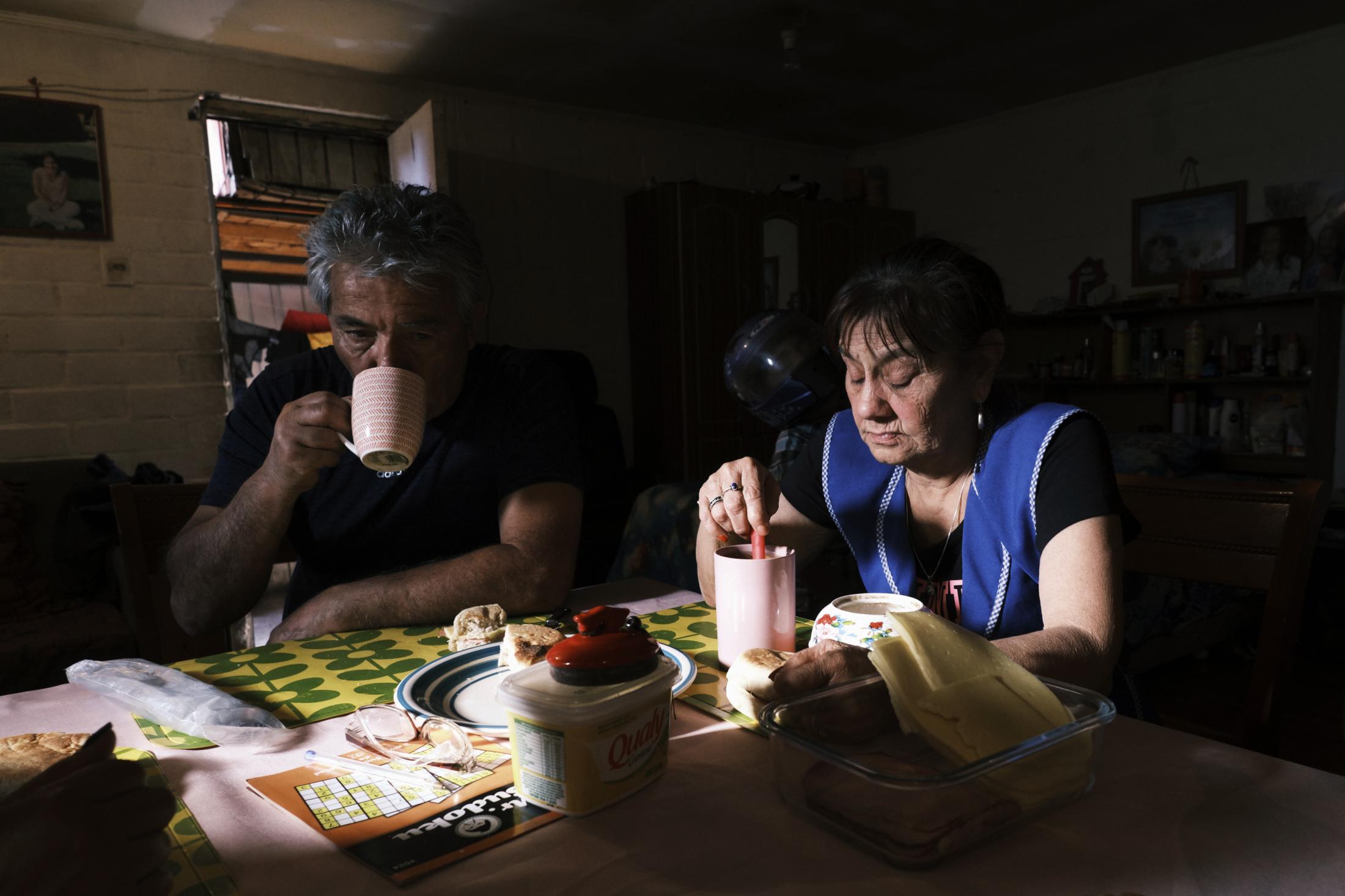 San Bernardo, Santiago, Chile, 2020. Paula Lorca’s parents, Ramón and Maria, drink coffee with the family. Just before she died, Paula had dinner at this table with her parents. 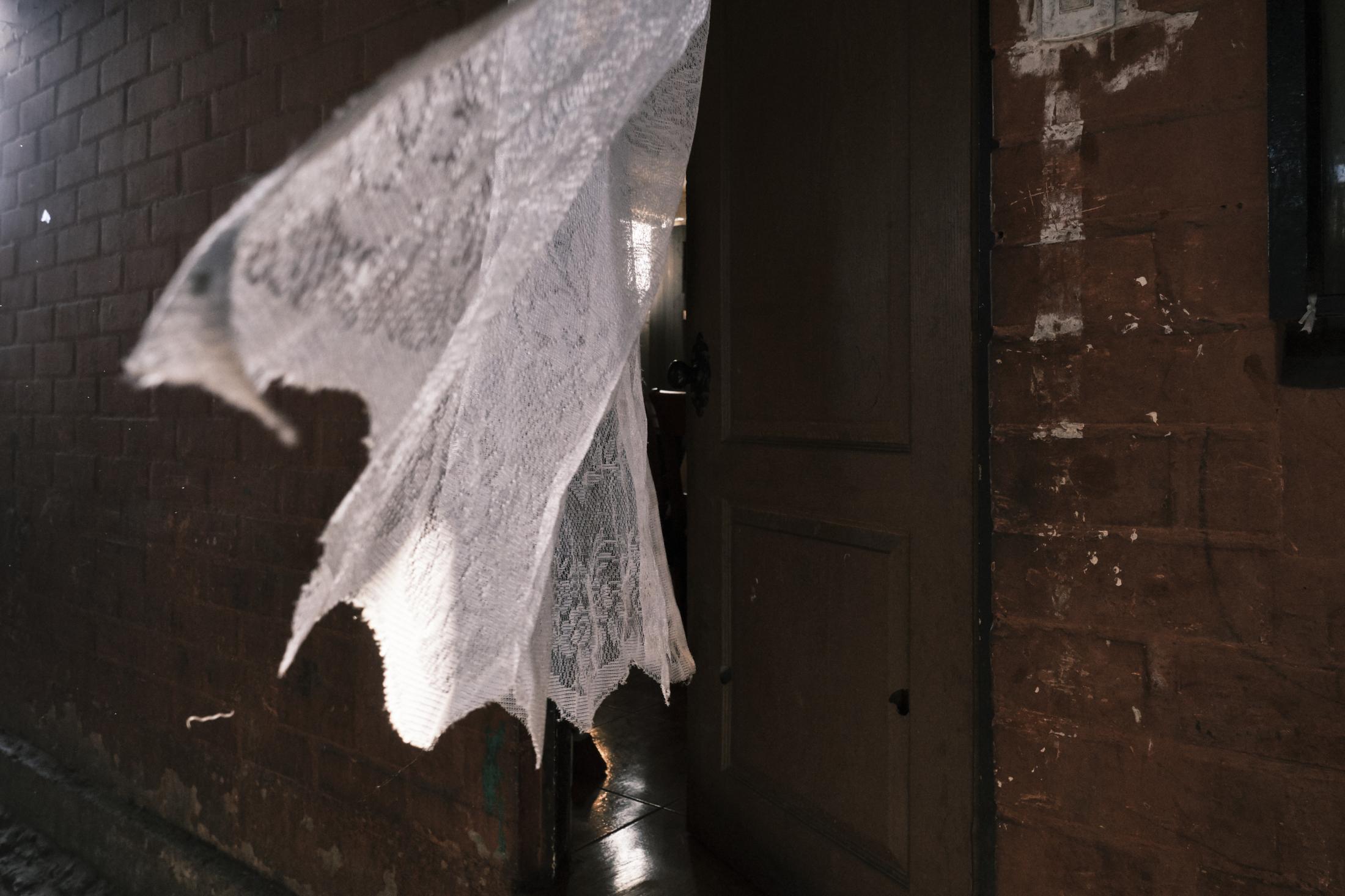 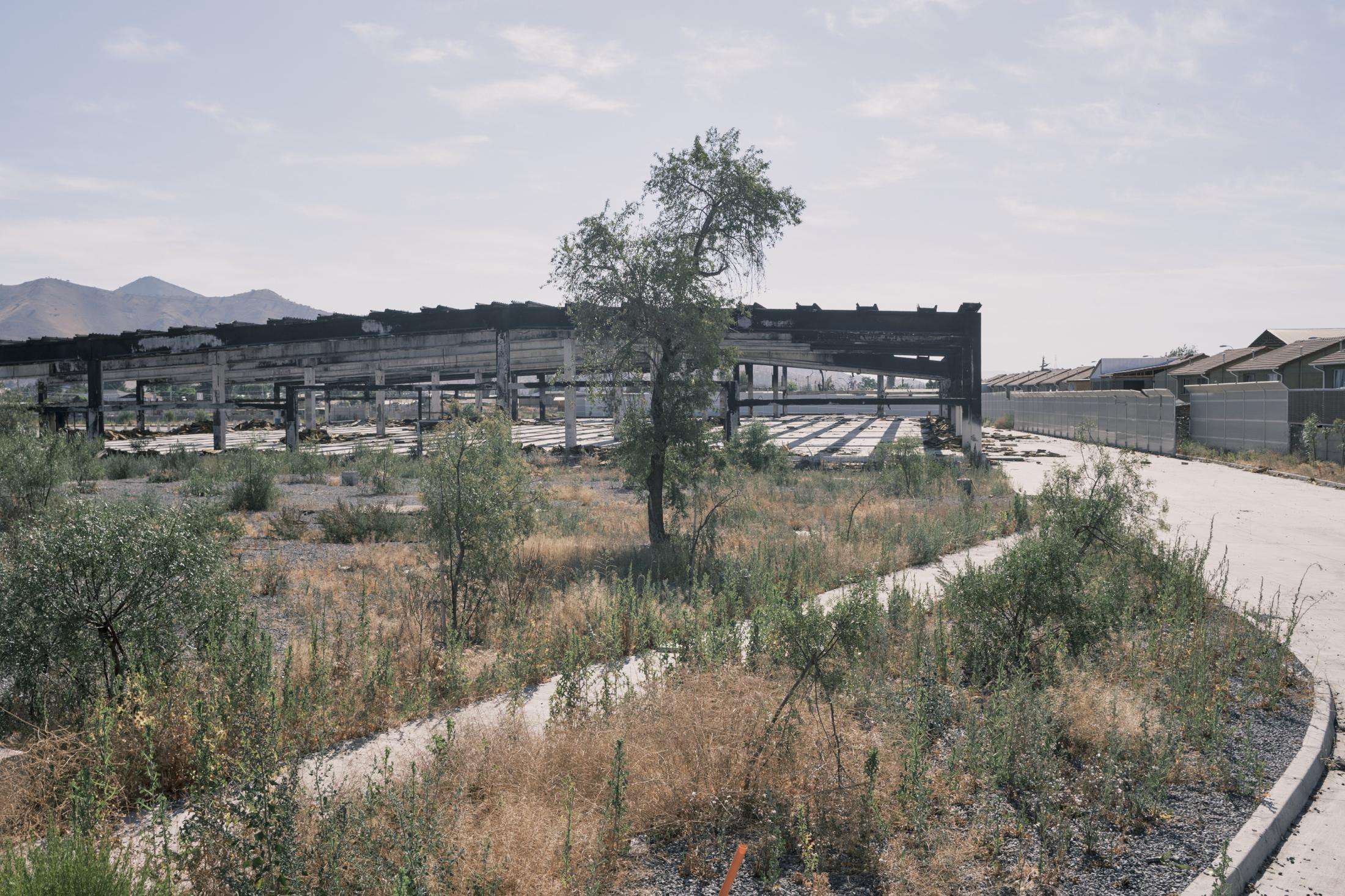 San Bernardo, Santiago, Chile, 2020. The site of the death of Paula Lorca, who was found inside a looted supermarket on the night of October 19, 2019. 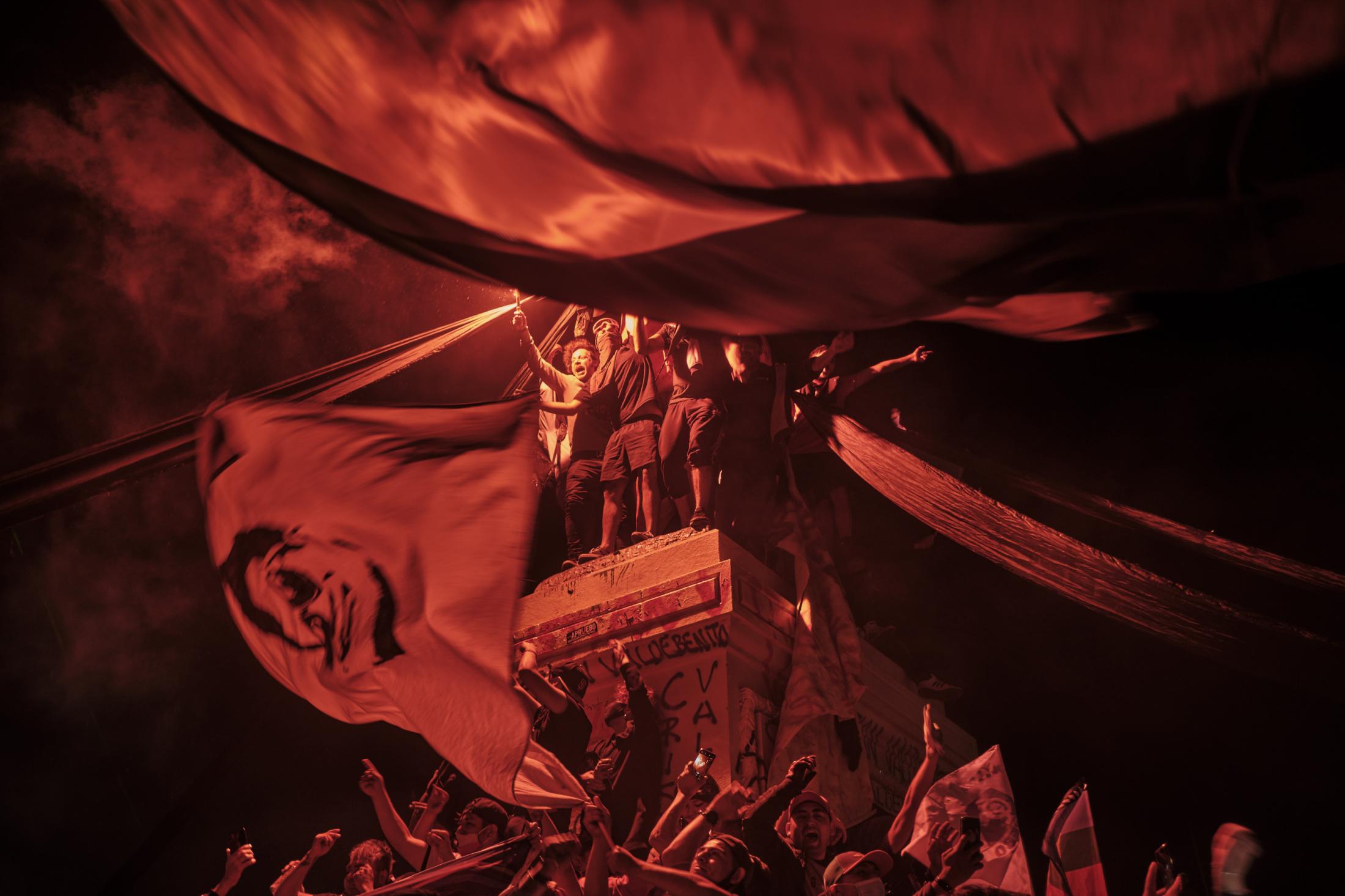 Santiago, Chile, 2020. Protesters gathered at the top of the General Manuel Baquedano monument to celebrate the referendum’s victory to write a new constitution for Chile. 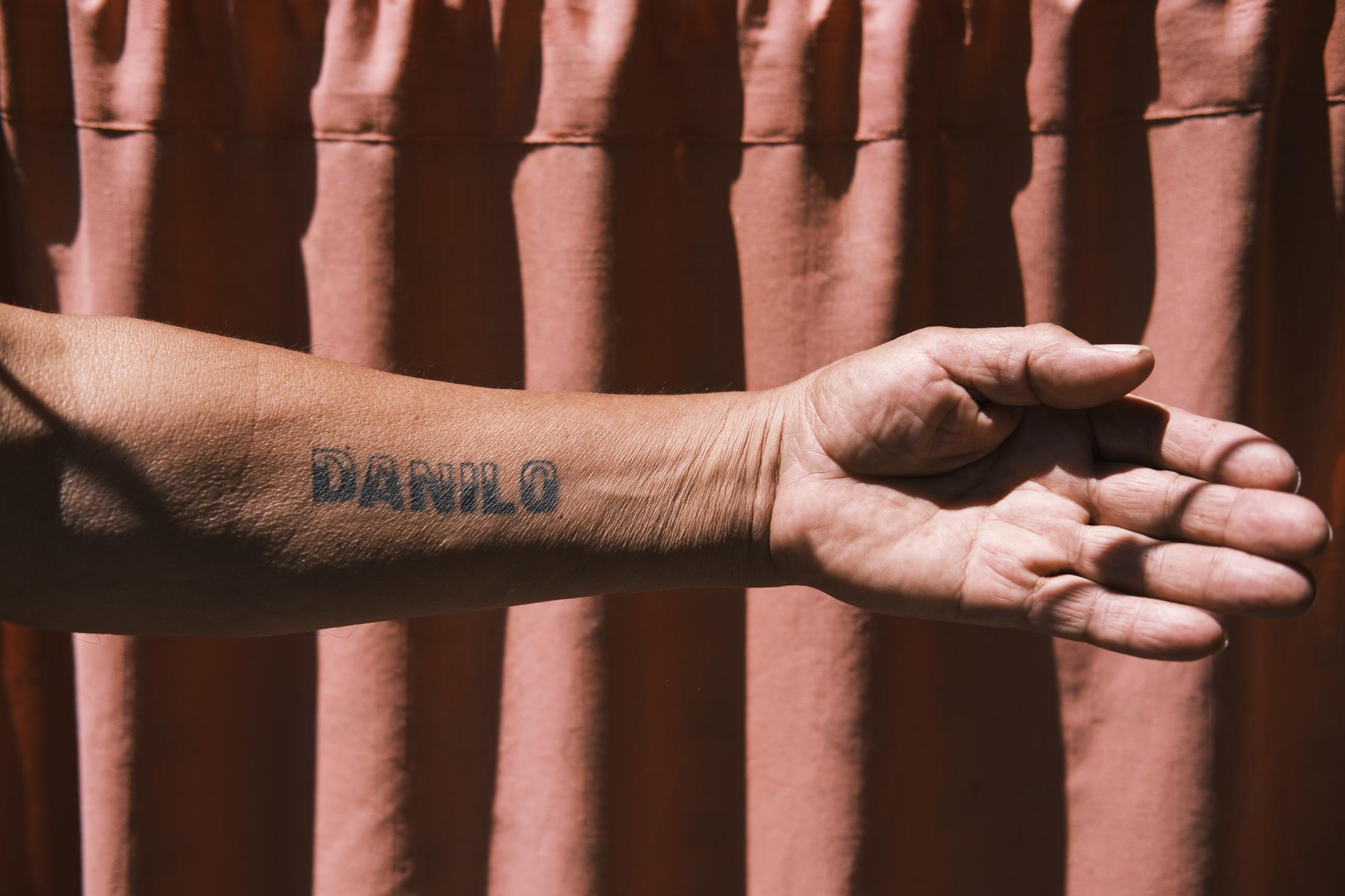 La Granja, Santiago, Chile, 2020. Juan Cárdenas’s tattoo in honor of his son Danilo. “I was always against marking your own body,” Juan says. “But I wanted to remember Danilo every day, so I got a tattoo just like him, for him.” 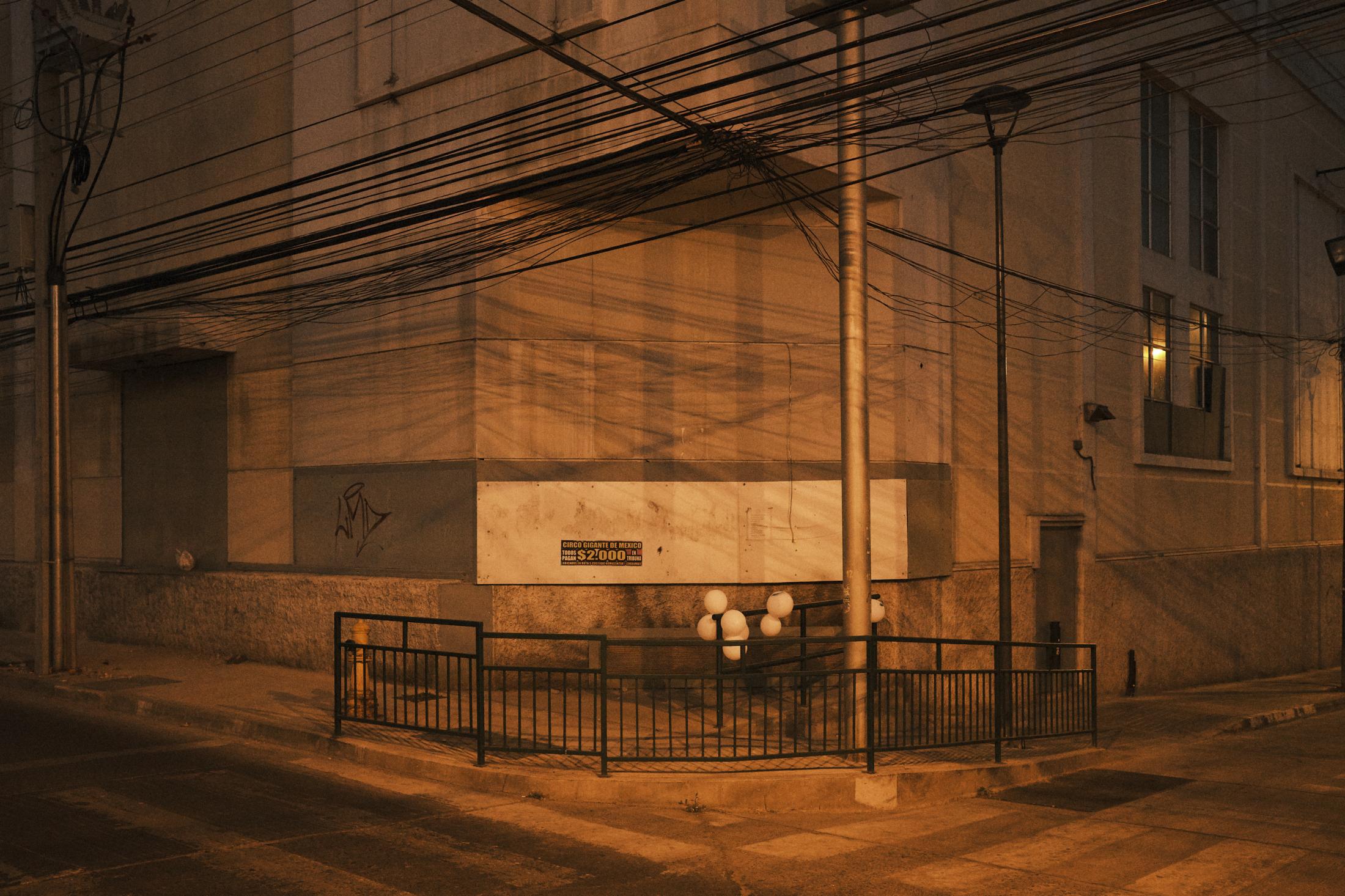 Coquimbo, Chile, 2020. Street corner where Kevin Gómez was killed by military forces. Kevin was shot in the back with his hands in the air. The investigation is still ongoing after a year. 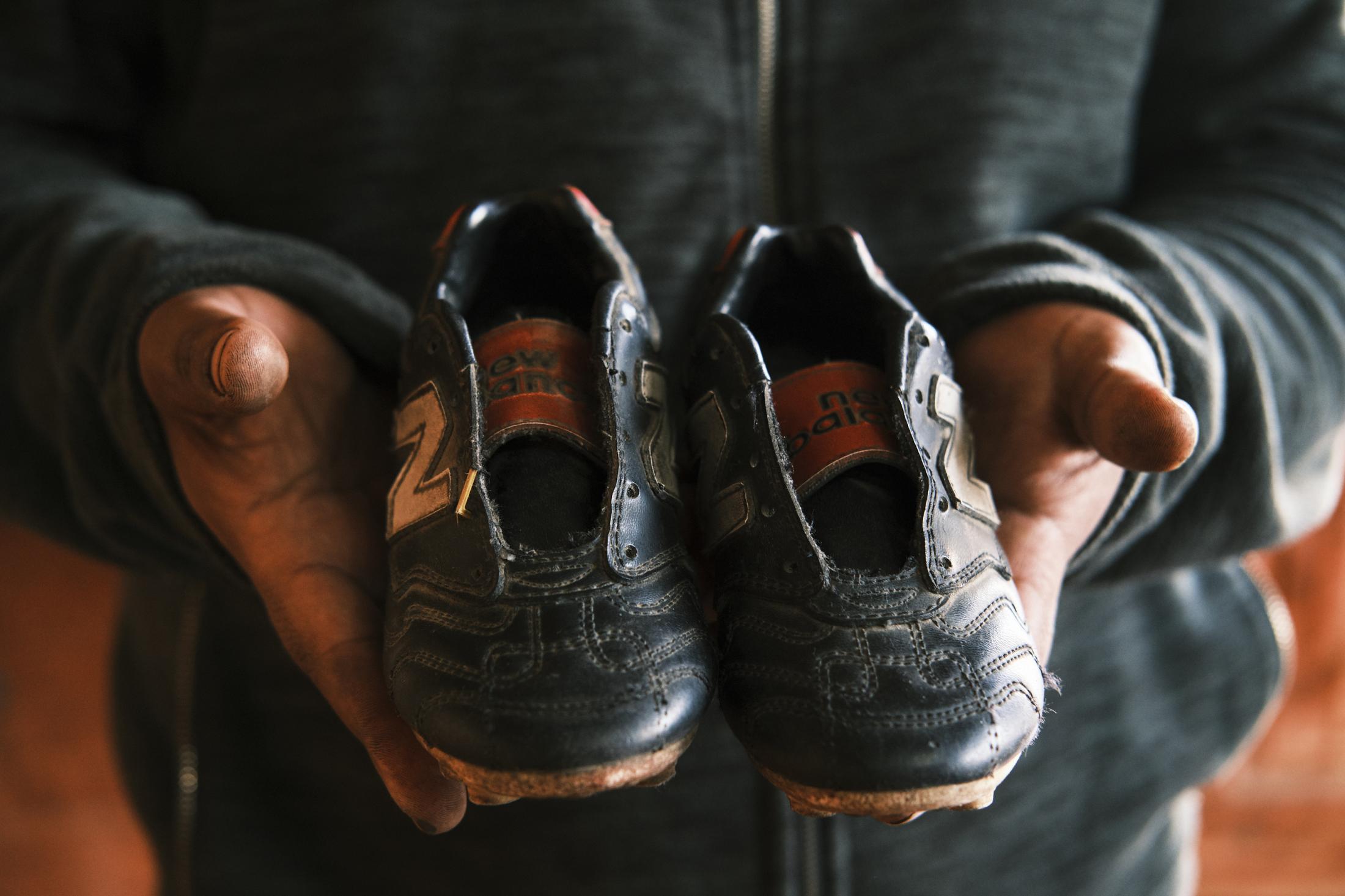 Coquimbo, Chile, 2020. Victor Briceño, the stepbrother of a teenager killed during a riot, holds a pair of old soccer shoes that were used by his brother when he was a kid. He explains in an interview, “I bought these shoes for him when he was five, I always kept them at home. Kevin came to live with us when he was a baby and was a brother to me. I raised him. When the army murdered him, I put the shoes in the coffin, but I decided to keep them with us forever at the last minute.”

Kevin Gómez, a 24-year-old student, was shot and killed by a member of the military forces deployed during a state of emergency on the first week of riots and lootings in the region of Coquimbo, in the north of Chile. Kevin was shot in the back with his hands in the air when the military assumed he was looting a strip mall with other protesters. The investigation is still ongoing after a year. 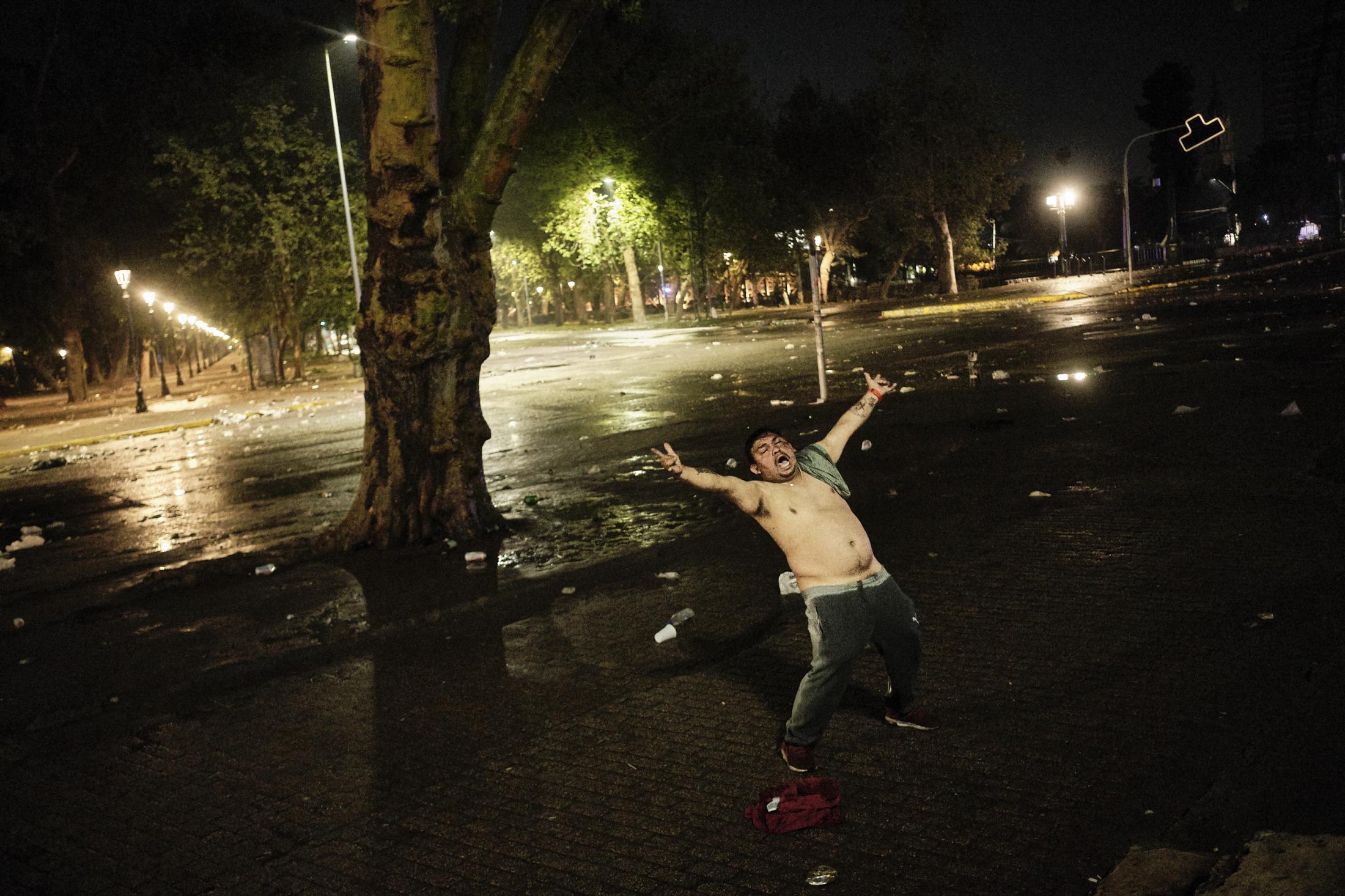