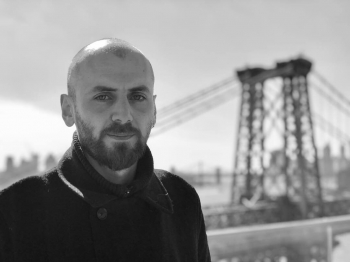 Alaa "Sheikh" Hassan is a Syrian/American artist and documentarian. He left Syria in 2013 to New York and has recently settled in Berlin. Alaa started his photography work in 2006 and later developed an interest in... read on
Location: Berlin
Focus: Photographer, Filmmaker
Skills: Film Scanning, Adobe Premier, Black & White Printing
alaa1.visura.co
About

Coverage Regions: Europe Middle East USA & Canada
Languages Spoken: English, Arabic
Years of experience: More than 10
Alaa "Sheikh" Hassan is a Syrian/American artist and documentarian. He left Syria in 2013 to New York and has recently settled in Berlin.
Alaa started his photography work in 2006 and later developed an interest in filmmaking and audio-visual art. Alaa’s work is concerned with the issues of political prosecution, immigration and memory. His photography book "Cardboard Castle" (2017) looks at the political advertisement and the urban development of Damascus. It was published with support from the British Council and the Prince Claus Fund. Alaa has participated in multiple exhibitions, including “Existing Elsewhere” in Berlin 2020, “Photoville” in New York, 2017, and “JourneÌes de la Photographie” in Damascus, 2010 and 2011. Alaa co-produced the award-winning feature documentary "The War Show" (2016), which was directed by Andreas Dalsgaard and Obaidah Zytoon. The film premiered at the Venice Film Festival, was shown globally and was awarded with multiple honors. His most recent documentary was co-produced with director Megan Mylan and titled: “Simple as Water” (2019).                        Alaa is currently working on an oral history project that documents middle eastern underground culture(s) besides his continued work on political detention and forced disappearance in Syria.

Existing Elsewhere 2020-present
Ongoing photography project that explores the relationship between individuals and cities.
The first exhibition of this project was in Berlin at the coculture space

Simple as water 2021 (film)
Principe Production, Damascus, Frankfurt, Turkey & US 2017-2019
Producer
This film was directed by Academy award winner Megan Mylan. The production of the film took place in Syria, Germany, Turkey, Greece and the USA.

The War Show 2016
Fridthjof Films- Syria, Denmark 2016
Producer, co-writer, co-edior
"The War Show” was a Danish Syrian production. The film premiered at the Venice Film Festival and won the Venice Days award along many other awards and recognition, the film was broadcasted in five continents and received critical acclaim. Including the Bodel awards in Denmark and the European film award.