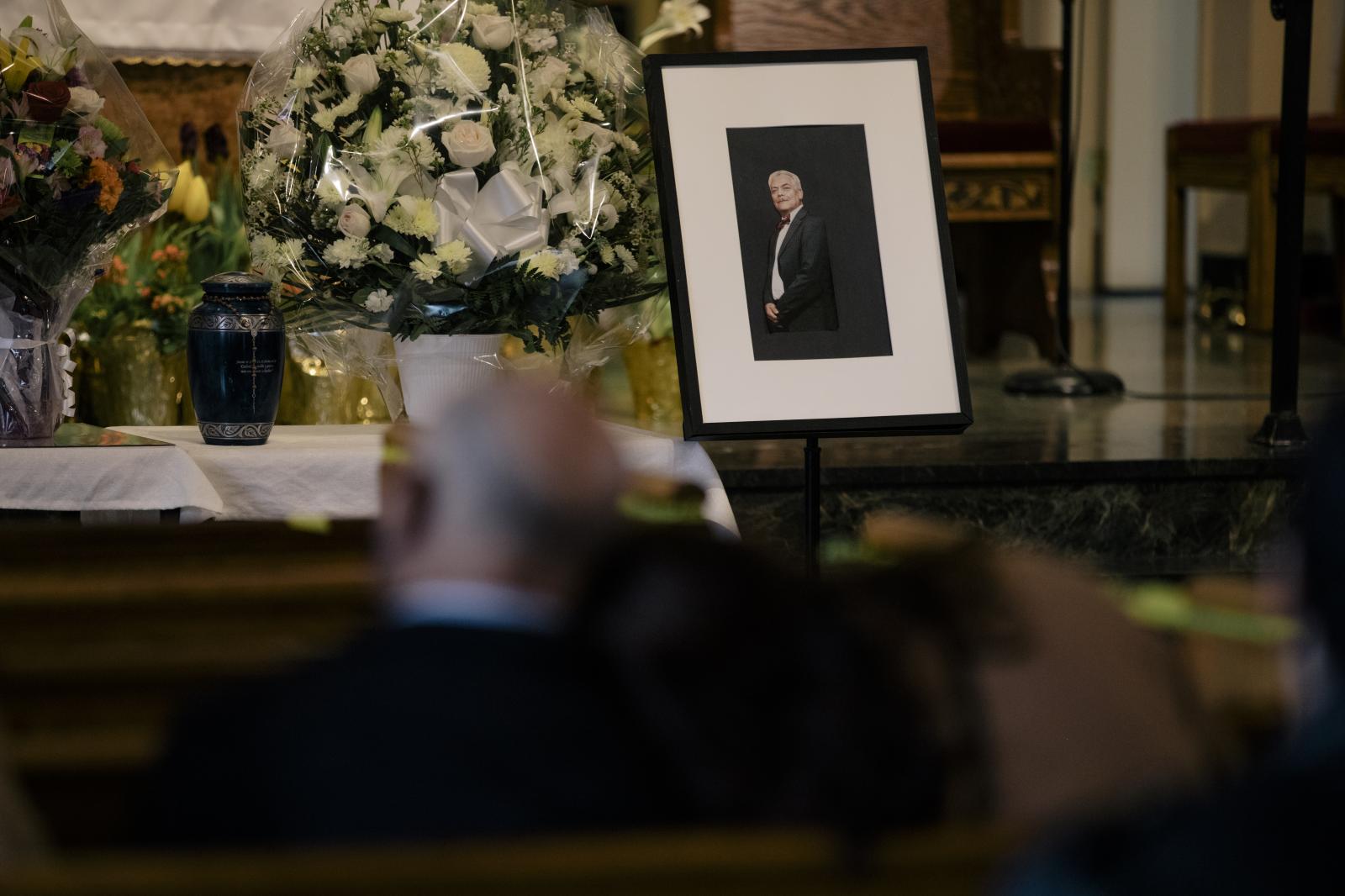 1 of 2 © 2023 Written By Adriana Teresa Letorney For The Visura Media Blog / Photos By José Alvarado Jr.
As the coronavirus pandemic begins to subside in New York state, members of the Salas family spend the morning honoring their late Father Don Javier Salas, who passed last April after contracting COVID-19, at Our Lady of the Angelus Church in Rego Park, Queens. After a debilitating and complex year due to the ongoing coronavirus pandemic, residents of New York City seek to return to a form of normalcy as the virus’s presence begins to fade. José A. Alvarado Jr. for Visura 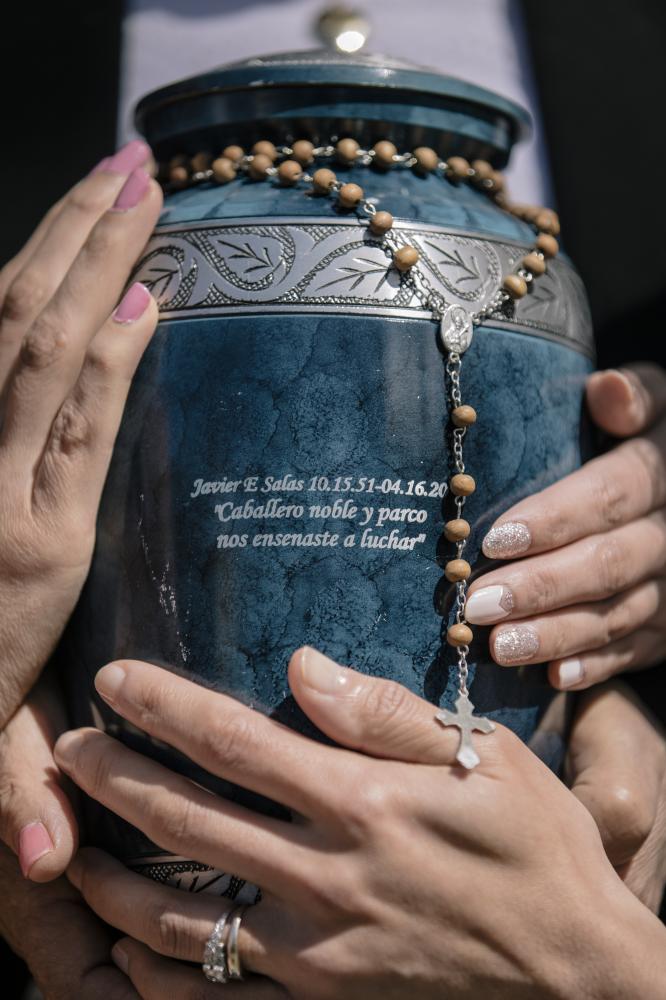 Public Story
Remembering an Immigrant Father Lost to Covid Statistics
Copyright Written by Adriana Teresa Letorney for The Visura Media Blog / Photos by José Alvarado Jr. 2023
Updated May 2021
Topics Black Lives Matter, Spotlight
One morning in early April of last year, Don Javier Salas woke up with no appetite. Soledad, his wife of over 40 years, served him a fruit. “Eat this papaya,” she said. “My breathing is short,” he replied. “I don’t feel well.” Terrified, Soledad ran outside in search of a pharmacy, but everything was closed. New York was in a state of lockdown due to the ravaging spread of the coronavirus.
“Tu papá está mal. No se siente bien,”  Salas warned her children. When his temperature reached a high of 100.5 degrees, they called for an ambulance.
Normally, whenever Don Javier left the house to work or run an errand, he would say,  “Ya me voy flaquita!,” using his affectionate nickname for his wife. That day, he left without saying goodbye. 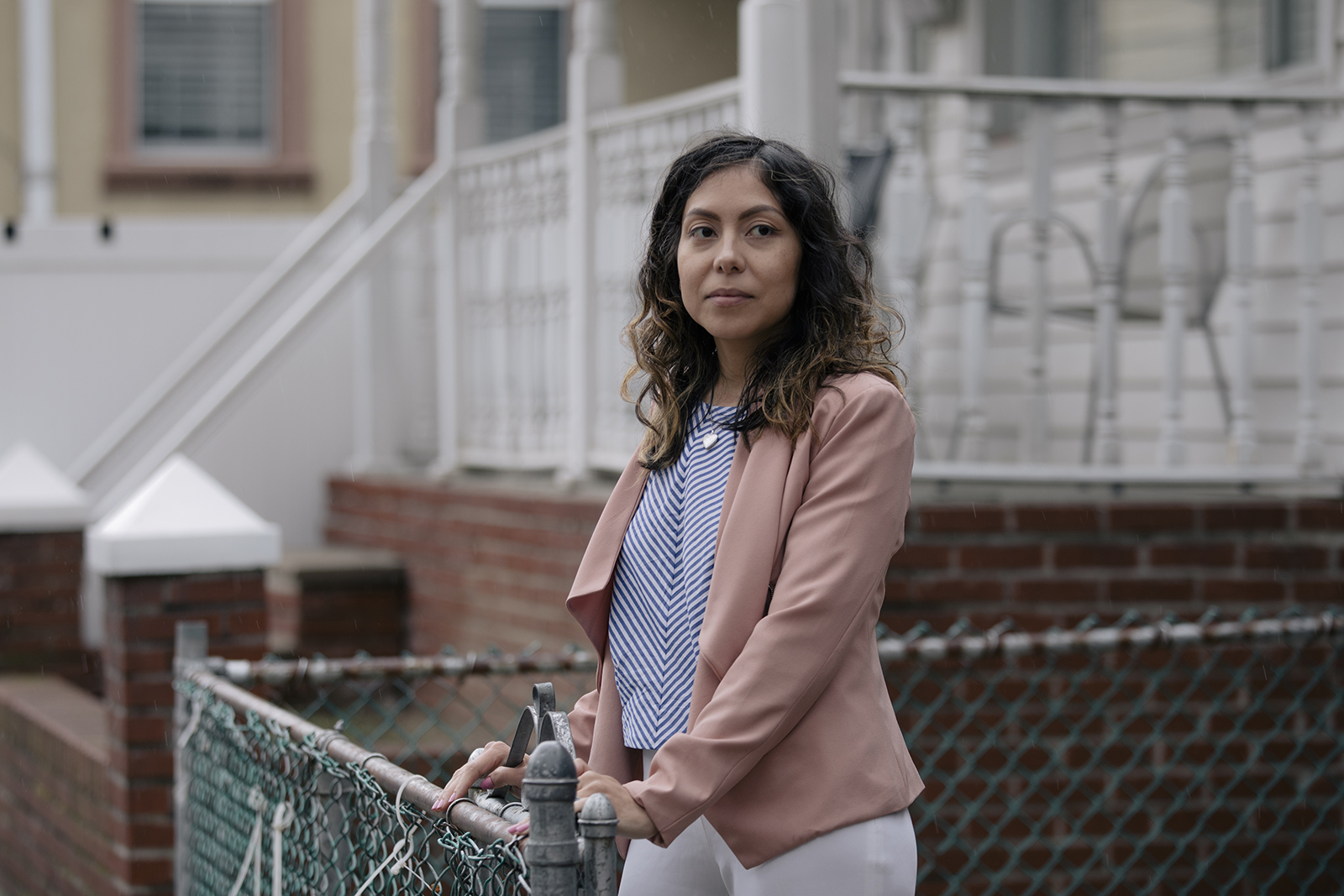 New York City, New York — April 16, 2021: Monserrat Salas, daughter of Don Javier Salas, at her parent's Woodhaven home after the memorial service honoring their father. José A. Alvarado Jr. for Visura
Monserrat, the second youngest of the couple’s children, arrived as the EMT pushed Don Javier on a stretcher into an ambulance. She begged the EMT to let her see him. Monserrat grabbed her father’s foot and said: “I love you. We are going to see you soon. You are fine. You are going to get out of this.”
He nodded. The EMT closed the back door of the ambulance, got in the front drivers seat, turned on its siren, and drove away. 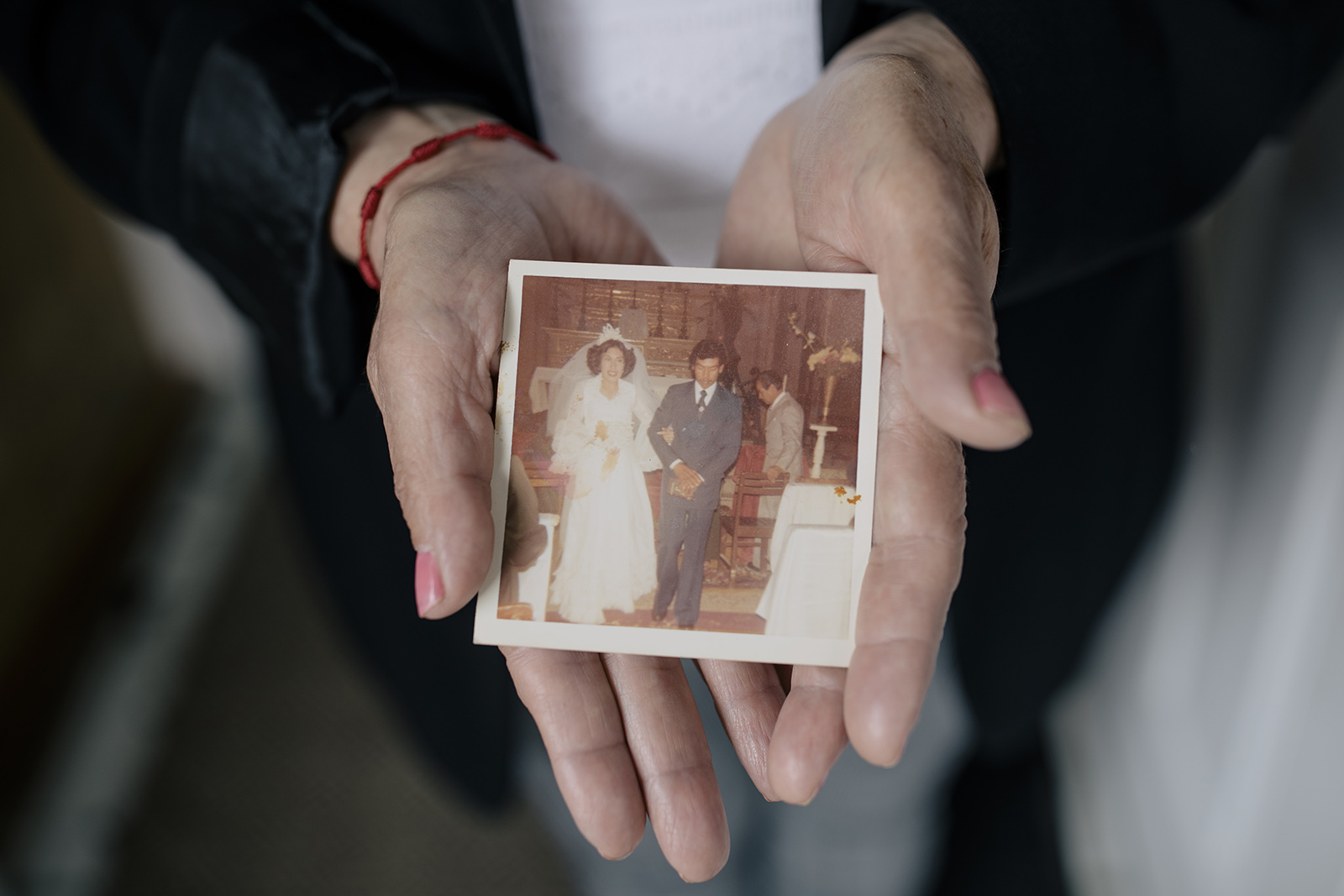 Soledad Salas, Don Javier Salas's wife of the last 40 years, holds a photograph from their wedding on November 25, 1979, at La Iglesia Sagrado Corazón de Jesús in Fresnillo, Zacatecas, during a gathering at their Woodhaven home. José A. Alvarado Jr. for Visura

In 1986, Don Javier brought his family across the Mexican border in search of a better life.  When he went to the hospital, his daughter Lupe Peterman, who was four when they crossed, wondered what life might be like without him. “We are what we are,” she said later, “because of him.”
Born in 1951 in Mexico, Don Javier was raised as a farmer. He and his wife Soledad lived and worked at a ranch owned by his family in Fresnillo, Zacatecas. Back then, life in the countryside was simple and fulfilling, according to Soledad. However, when they began having children in 1979, they realized there was limited opportunity for them. Six years later, they made the decision to leave Mexico in search of personal and economic security in the United States.
After carefully planning the journey, one night they took a bus from Zacatecas to Tijuana. They walked toward an unsupervised tall metallic gate, where they found a sizable hole that divided Tijuana and the United States. One by one, Don Javier, his pregnant wife Soledad, and three kids—Lupe 4, Edgar 6, and Noe, a one-year-old held tightly by his father, hurriedly pushed themselves through the hole, crossing into the border of their neighboring nation, instantaneously finding themselves on American soil. A taxi driver was waiting for the family of five on the other side of the border.  Immigration patrol passed right in front of the Salas family but did not stop. The taxi driver dropped the family at a one-bedroom house that was filled with other immigrants, all sleeping on the floor. Although Lupe was four years old, she still remembers it: “We were like sardines inside that room.”

They stayed one night in the house. Worried about protecting their children, Don Javier and his wife did not sleep. The following day, the family flew to Los Angeles with the help of Don Javier’s sister.  One week later, they took another flight to New York, where his sister awaited their arrival. They eventually settled in Queens, and have lived there for over 34 years. 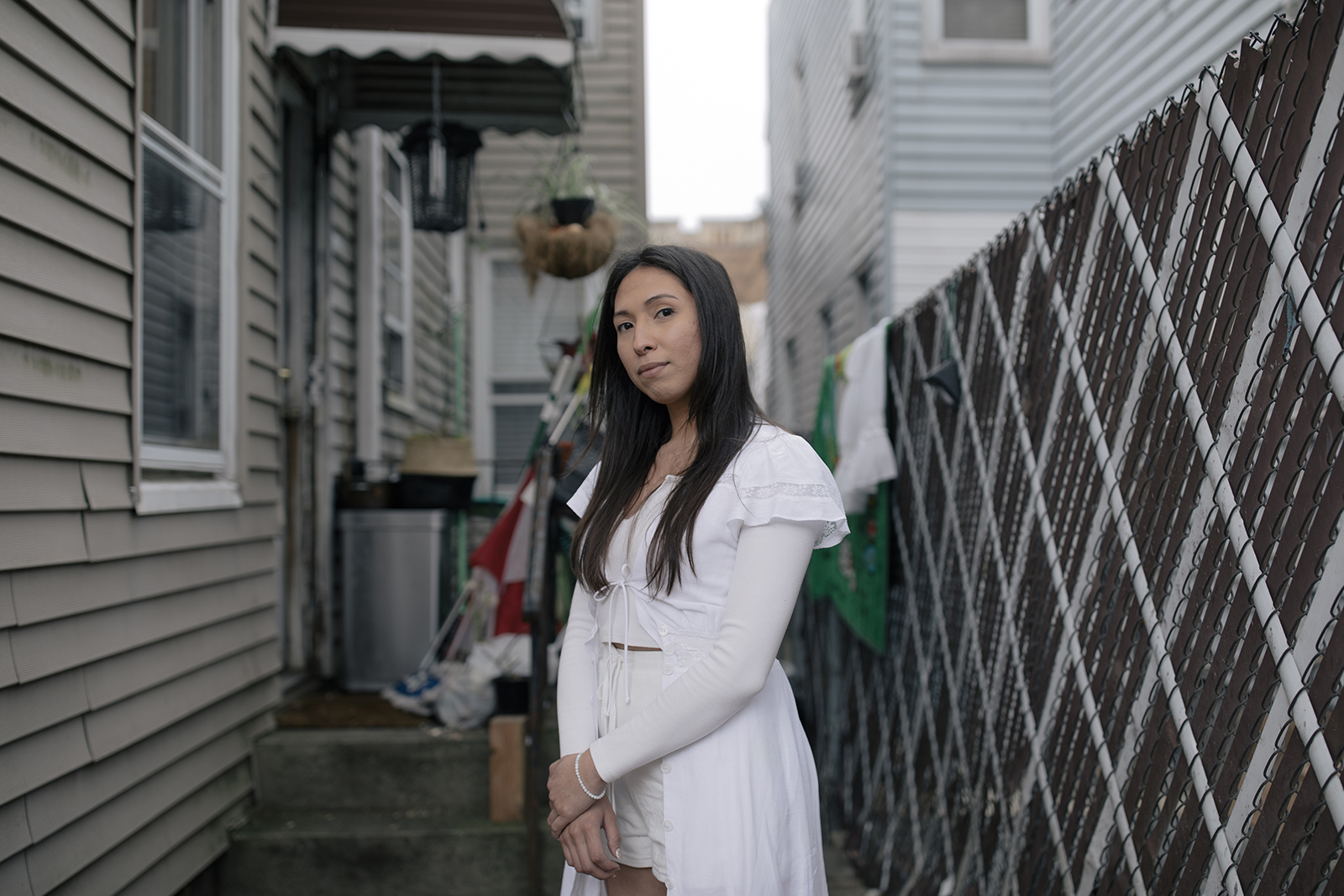 Virgínia Salas, daughter of the late Don Javier Salas, at her parent's Woodhaven home after the family’s memorial service honoring their father. José A. Alvarado Jr. for Visura

“My father, Javier Salas, was a man of great purpose,'' said his youngest daughter Vicki, now 30. “He was everything I ever wanted to be. He was honest, hard-working, brave, creative, and had such a passion for living life to the fullest. He was my hero.”
Don Javier spent the last 11 years of his days working in a laundry room, washing towels at a gym in Manhattan. According to his wife, the laundry room had no ventilation or windows, only a door. It was filled with industrial machines with filters he cleaned continuously for dust and lint. Throughout the years, he developed respiratory problems and other health issues. Still, he continued to work.
In March 2020, at the height of the coronavirus pandemic, Don Javier was hospitalized for an enlarged heart and prostate at the Forest Hills Jewish Hospital in Queens, New York. During his stay, he wore a mask to protect himself as the pandemic breached into every industry in the U.S., until a nurse took it away from him. She told him that she didn’t think it was necessary.
Eventually, after a two-week-long hospital visit and semi-full recovery, Don Javier returned home and went back to work. However, in early April, he fell sick again and his family decided to call 911. The ambulance took him away. This time, Don Javier was hospitalized and diagnosed with Covid-19. 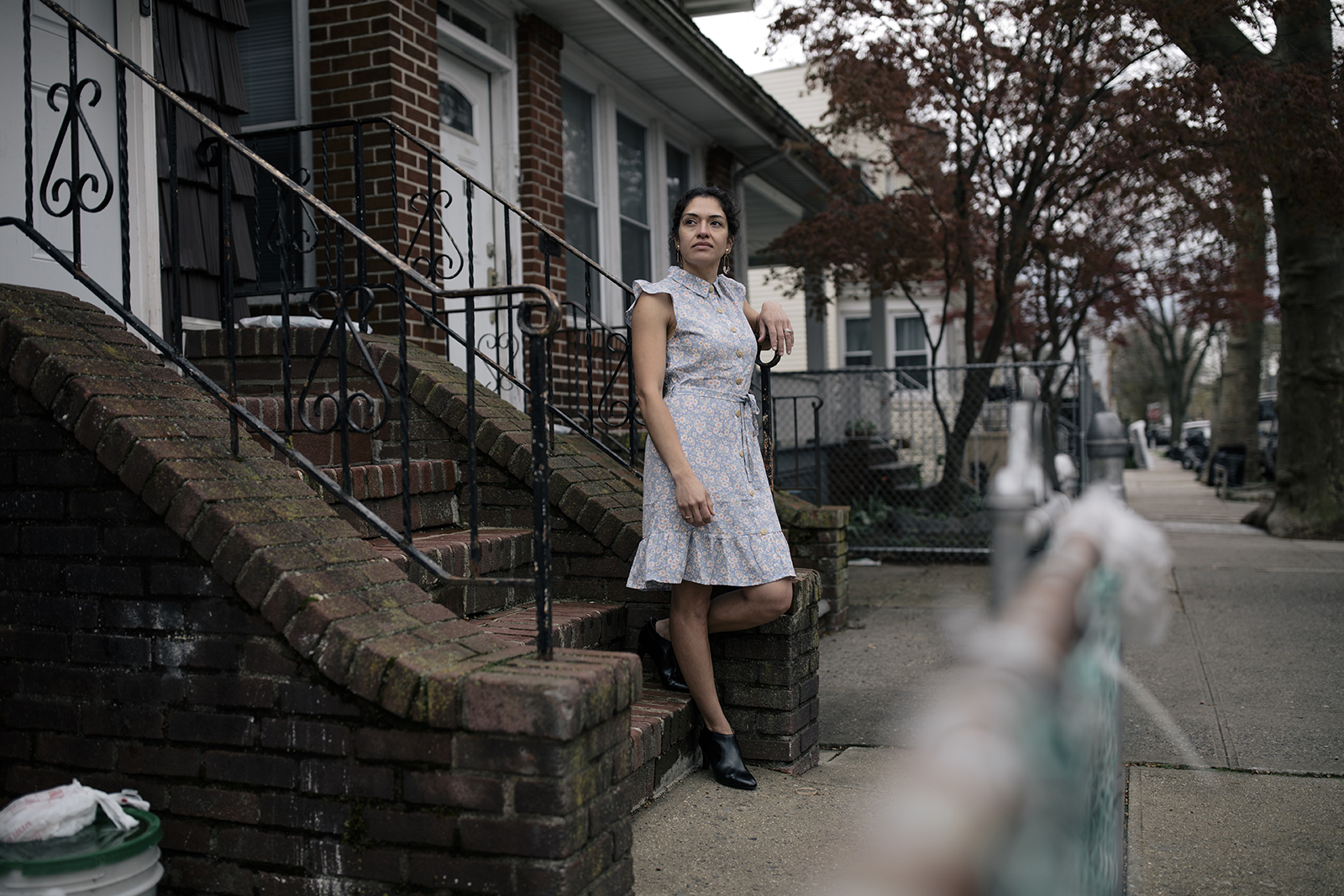 Guadalupe Salas, daughter of the late Don Javier Salas, at her parent's Woodhaven home on the day of the memorial service honoring her father. José A. Alvarado Jr. for Visura
To this day, it is unclear to the Salas family where he contracted the virus, although they speculate it was either at his workplace or the hospital. “We don't know if we will ever know,” said Lupe. “And if we do ever find out, it won't make a difference. It won't bring my dad back.”
At the time, many hospitals were at full capacity. The family’s option was the Jamaica Hospital Medical Center in Queens.  The EMT drove him there.
Later, Soledad was uncertain whether they made the right decision when they called for an ambulance.“I still wonder if things would have been different if he would have stayed home,” she said. 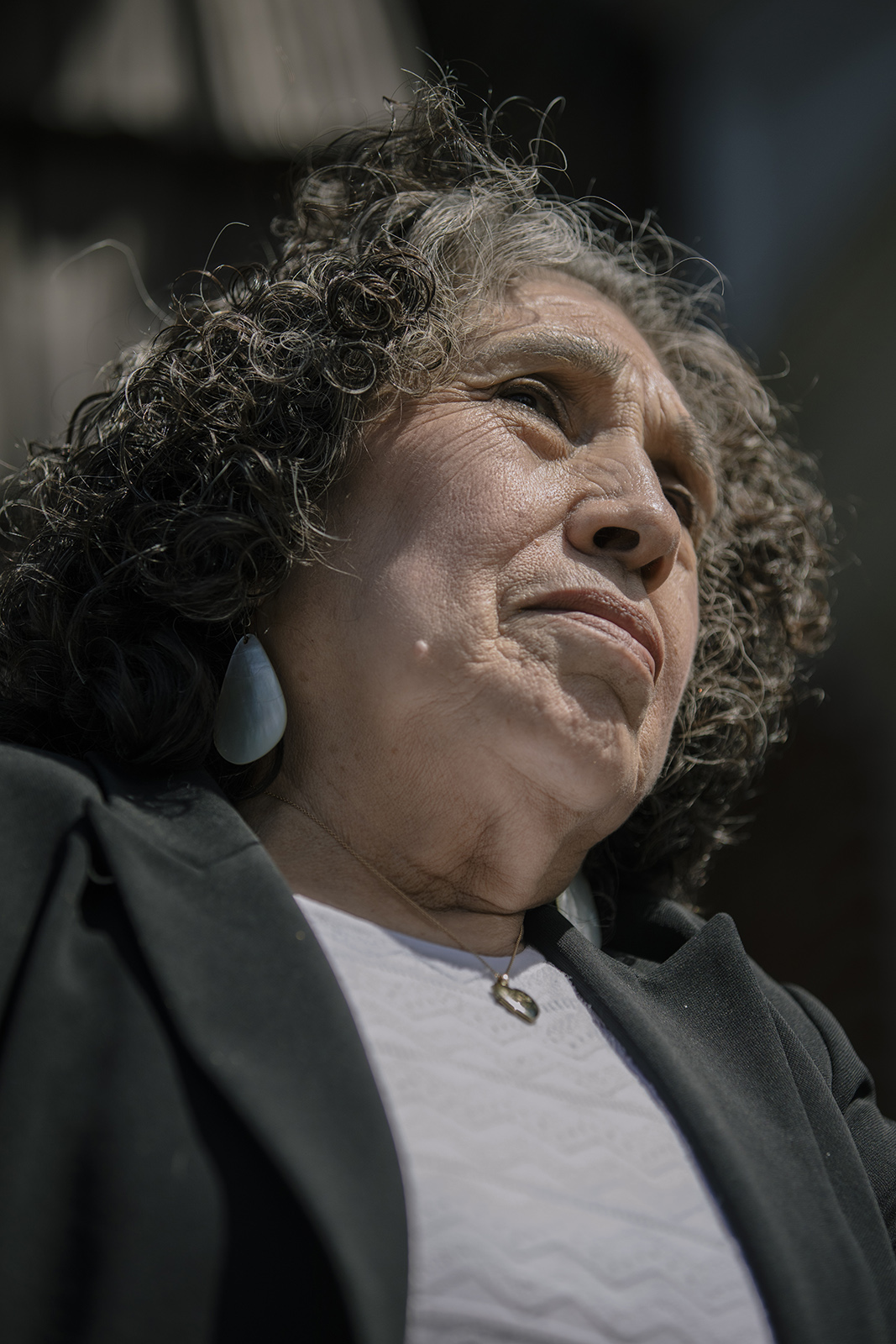 Soledad Salas, Don Javier Salas’s wife of over 40 years, at her
Woodhaven home after a memorial service honoring her husband
who died due to complications from COVID-19.
José A. Alvarado Jr. for Visura
During his hospital stay, Don Javier spoke with his wife and children daily.
“I love you so much, ” he said. “We love you, too,” they replied.
Ten days after he was admitted, Don Javier called home. Soledad answered, “ How are you?” to which he replied, gasping, “Good.” He quickly hung up. Afterward, she received a text from him that said “I am unable to talk anymore.”
That was the last time they heard his voice.
The doctor informed the Salas family that Don Javier was still conscious but needed to be placed on a ventilator. A nurse held the phone close to his ear so the family could speak to him. He was only able to listen.
“We love you.” “You are the best husband and father in the world.”
After he was intubated, he went into cardiac arrest. The medical staff was able to revive him once. But only a few minutes later, he was dead.
“I couldn’t be with him,” Soledad said, “I couldn’t even say goodbye.” 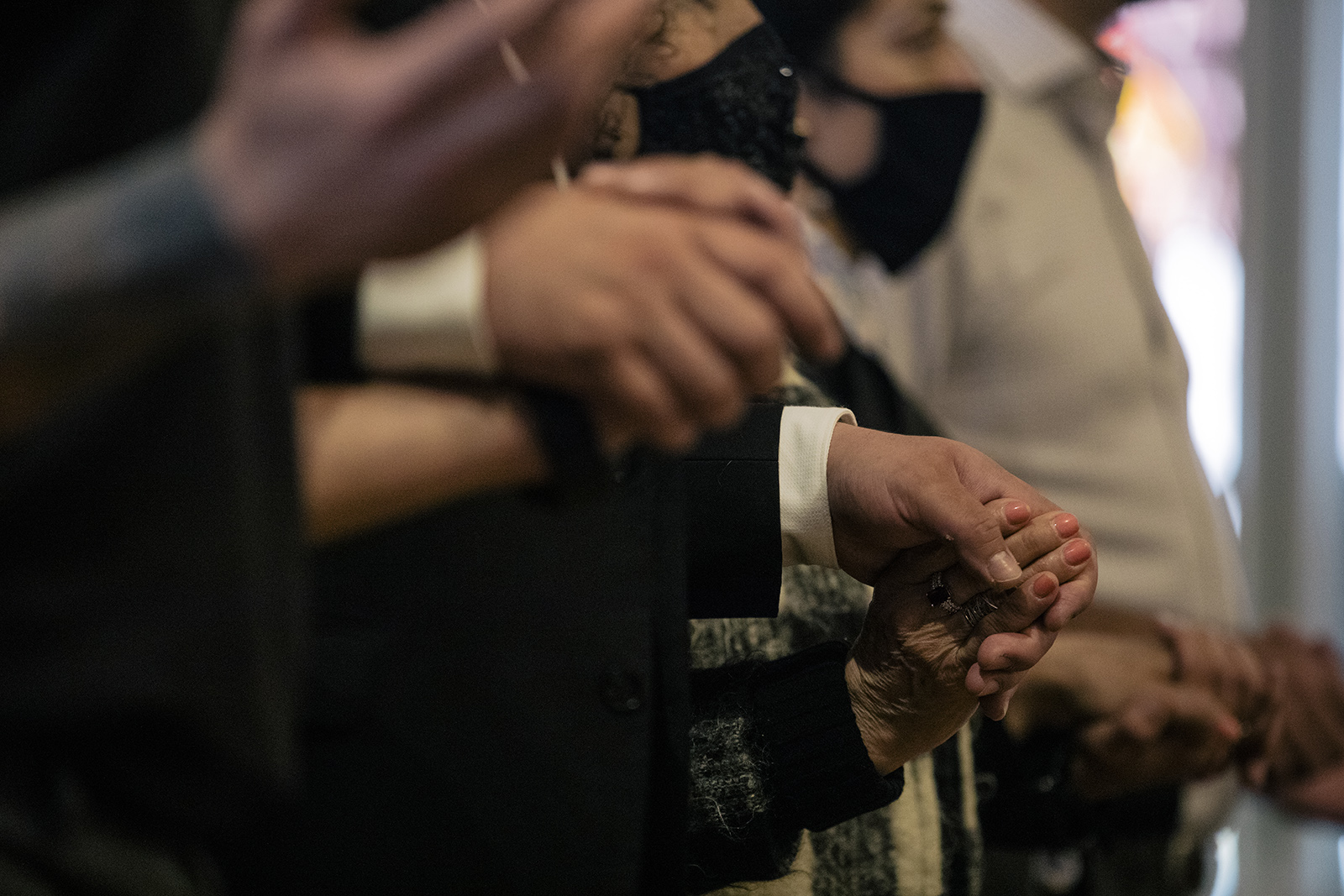 As the memorial mass for Don Javier Salas begins, members of the Salas family hold hands as Father Thomas Pettei leads the service at Our Lady of the Angelus Church in Rego Park, Queens. José A. Alvarado Jr. for Visura

Javier Eduwijes Salas, known to those who loved him as Don Javier, died without his family in the Jamaica Hospital Center in Queens in mid-April as the coronavirus pandemic raged.
With New York funeral homes overwhelmed, the family searched until they found a place in Connecticut that agreed to host a funeral. Around 18 family members attended, and each household sat separately. Although they would have chosen cremation whether there was a pandemic or not, they were told they had no other option to prevent further disease spread.
Social Security paid the Salas family $255 for funeral expenses that in reality amounted to $5000. “That is a mockery,” Soledad said. “What are we supposed to do with that? It is so painful.”
Vicki believes that her father, like countless other victims, did not deserve for his life to end alone.  “To only be comforted by your loved one's voices echoed through a cell phone surrounded by strangers, unable to say any last goodbyes,” she said. “Then not have the right to be buried in an honorable way according to their respective culture.” 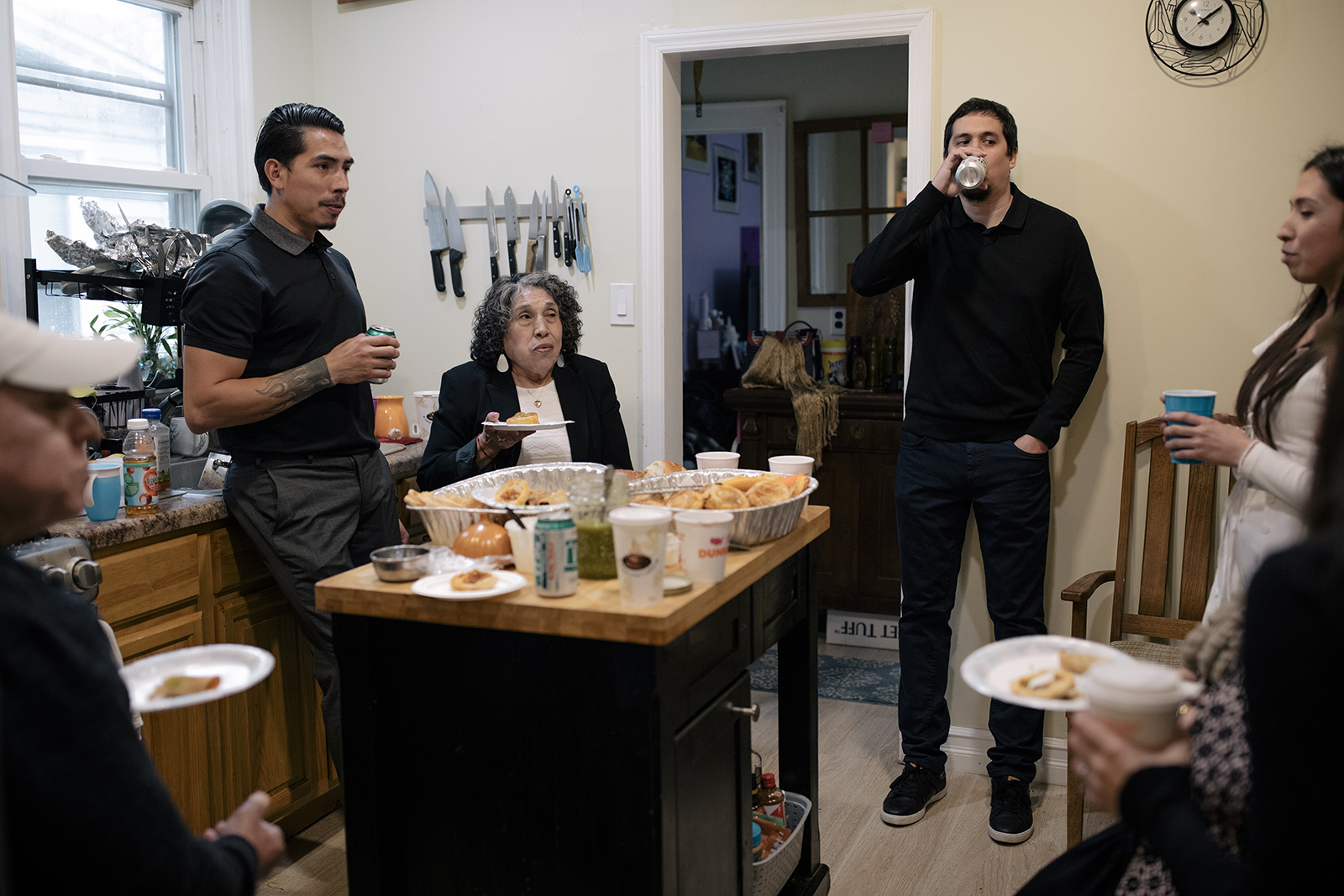 Family members of the late Don Javier Salas, Guillermo “Willy” Salas, left, Noe Salas, center-left, Soledad Salas, center, and Virgínia Salas, right, gather in the family’s Woodhaven home after a memorial service at Our Lady of the Angelus Church. José A. Alvarado Jr. for Visura
Don Javier’s ashes remain at home, where the Salas family awaits a better time to return them to Mexico to honor his wishes of spreading his ashes on his home soil.
More than 500,000 individuals have lost their lives to the coronavirus in the United States to date. The Latino community has been especially hard hit.  One out of every 5 deaths in the United States among Hispanics during 2020, according to The Washington Post was due to Covid.
Names, each with a life and history of its own, became lost to long lists of the deceased. Lists became statistics. Don Javier’s death transcends any local or federal tally mark. His life was full of personal achievements and hardships, and a family that is still mourning his loss and wondering what life will be like without him. 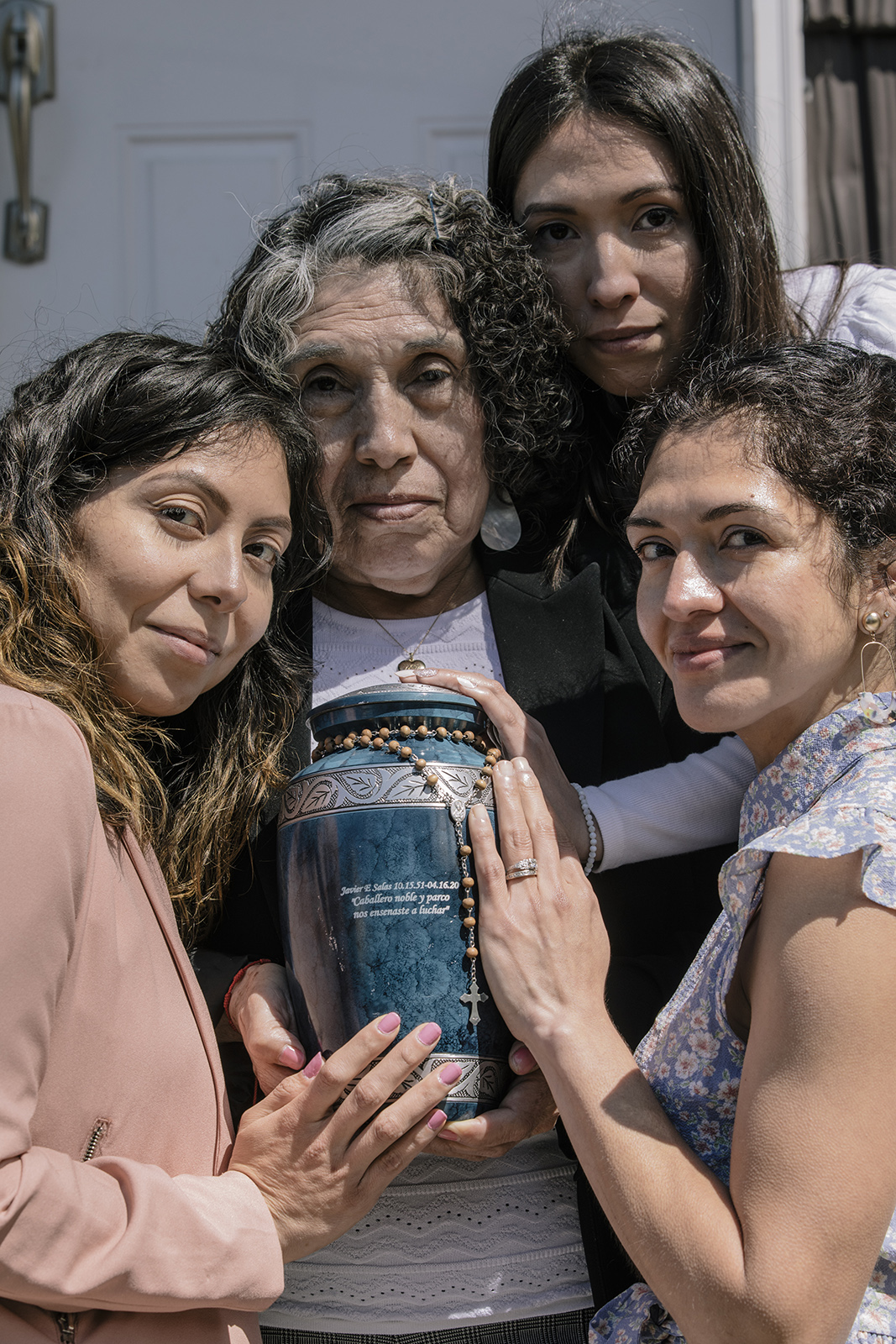