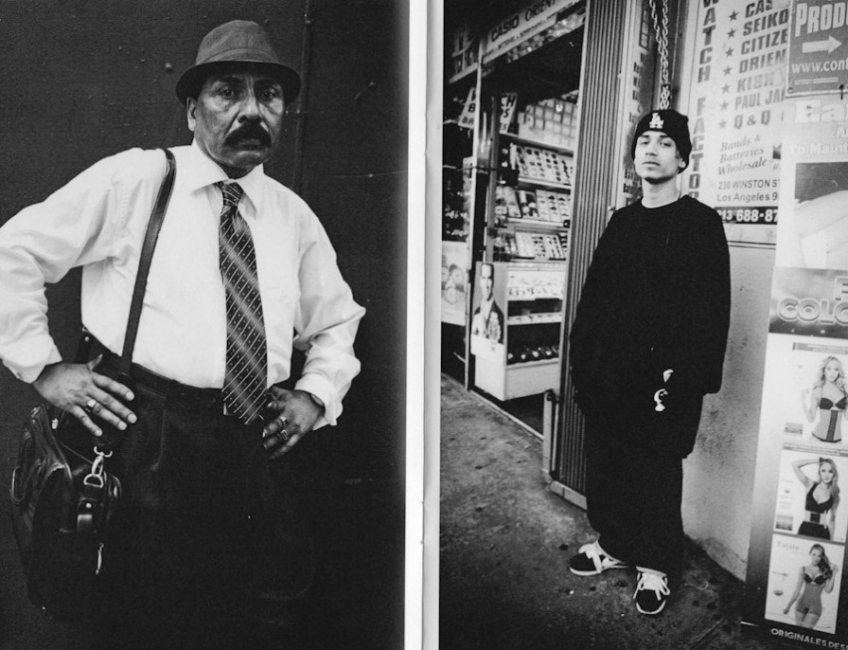 Photographer Sean Maung walks the streets of his native Los Angeles, camera in hand, eye on the scene, capturing a captivating collection of personalities that populate the city’s streets. Since 2010 he has been putting out a series of zines that are equal parts gritty and lush, with titles including Put That on Something, Fascinations, and Peep Show. Maung reveals, “I have always thought of zines like mixtapes. I have complete control of what I produce and show, and that’s empowering.” Maung has just released G-Body, his tenth zine. He speaks with Crave about his work.

When did you begin taking photos, and what inspired you to become a photographer?

Sean Maung: I started taking photos in 2005. I have always been inspired by people and places. I have spent a lot of time working for community based organizations and that has connected to me many different walks of life. Photography is another way to connect with people from all types of backgrounds.

Are all the photos in G-Body taken in Los Angeles? If so I’d love to get your thoughts on the city. What is your LA?

The majority of the photos are from LA. There are like five photos from other places, but the rest are LA. As for LA, and what the city is to me: I grew up in an area that some identify as mid city and others say is the Westside. The city to me is about the cross pollination of race/ethnicity/sub-cultures/class that has created and inspired how I take photos and make art. So when I shoot in LA, it’s a product of my upbringing and experiences, and a product of being aware of the overall pulse of the city and the cultural dynamics of the city.

By Sara Rosen — When punk hit San Francisco in the late 70s, it spawned a vibrant underground movement that embraced the..
Feb 20, 2017

By Sara Rosen — There are those times when I do not have words, when the emotion is to visceral to translate into ideas...
Feb 13, 2017

By Sara Rosen — On February 1, Donald Trump kicked off Black History Month with a breakfast meeting where he quixotically..
Feb 7, 2017

By Sara Rosen — Crave fave Awol Erizku has made headlines worldwide as the artist who photographed Beyoncé’s pregnancy..
Feb 7, 2017

By Sara Rosen — The Gordon Parks Foundation has named photographer Devin Allen as one of two inaugural recipients of a new..
Feb 7, 2017

By Sara Rosen — Some photographs are so emblematic that all you need to do is say the word and you can see the image..
Jan 30, 2017

By Sara Rosen — It was written. And then it was lost. But prophecies must reveal themselves. This is the story of..
Jan 26, 2017

By Sara Rosen — “I picked up a camera because it was my choice of weapon against what I hated most about the universe:..
Jan 25, 2017

By Sara Rosen — As we enter a brave new world filled with threats unfolding against the citizens of this nation by the very..
Jan 20, 2017

By Sara Rosen — Ming Smith is the quiet storm, her photographs evoking the soul of Billie Holiday’s music in photographic..
Jan 18, 2017

By Sara Rosen — When the future is bleak, denial only delays the inevitable—and can often make our fall from grace that..
Jan 13, 2017

By Sara Rosen — Israeli photographer Yoav Horesh remembers a formative moment many years ago while walking with his father..
Jan 12, 2017

By Sara Rosen — Although the photographer usually stands behind the camera, they are present in every shot they make, from..
Jan 6, 2017

By Sara Rosen — The beauty of liberation is that it is a deeply personal affair, requiring none but ourselves to realize...
Jan 3, 2017

By Sara Rosen — For a photography aficionado, there is nothing quite so thrilling as looking at contact sheets. It is like..
Jan 2, 2017