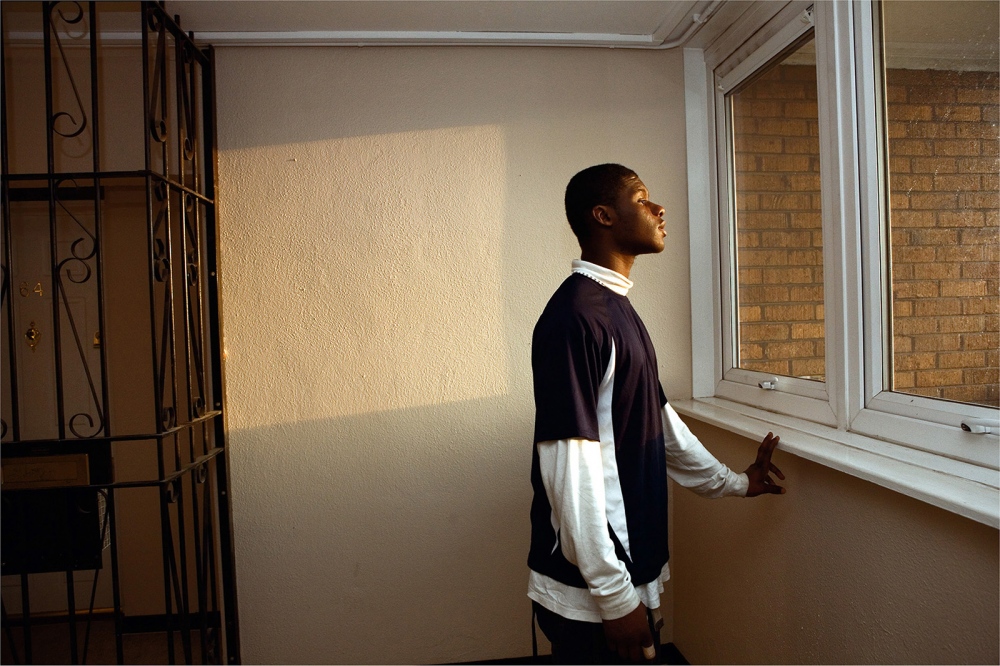 1 of 22 © 2021 Nicola Dracoulis
Junior looking out over Hoxton at sunset, 2008
Junior has one of those big smile personalities where it seems like life is always fun. At 18, he was surviving a lot of issues with his family, his mum wasn’t really around and from the age of 11 he’d been looking after his younger siblings. He always had big ideas and was intent on seeking a better life. 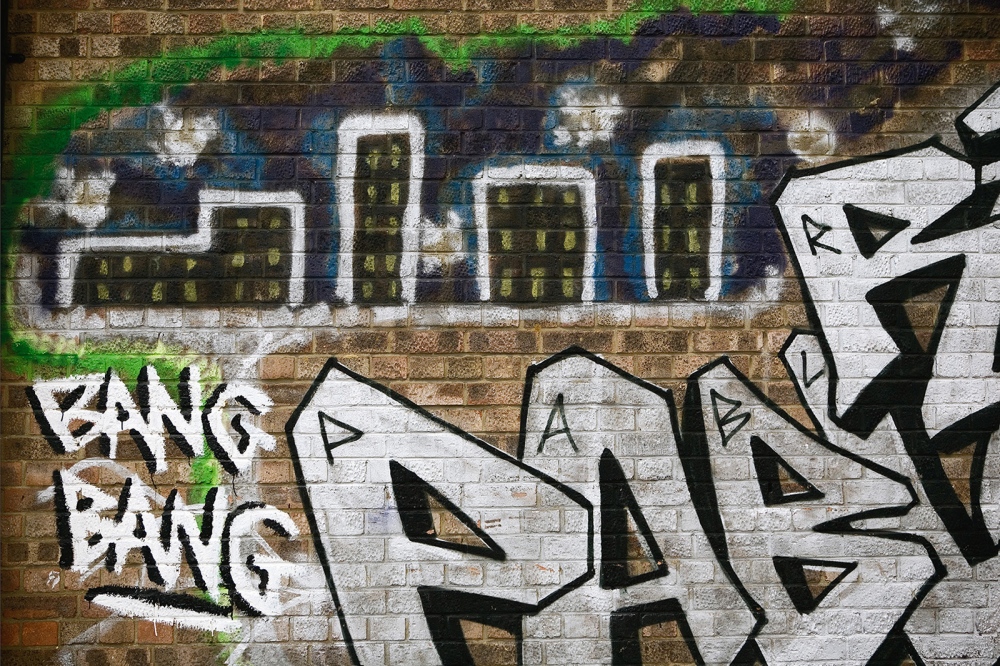 This wall of graffiti was dedicated to 16 year-old Robert Levy who died in 2004 from stab wounds after trying to help another kid from being stabbed in the middle of a large clash of teenagers in Central Hackney. Most of the young people in this project were not directly involved in gangs, but everyone grew up affected by the violence that was going on around them. Their movements were restricted due to the ‘post-code’ gang wars, they all knew someone who had died from gang violence and it seemed there were only negative reports in the media about young people in Hackney. 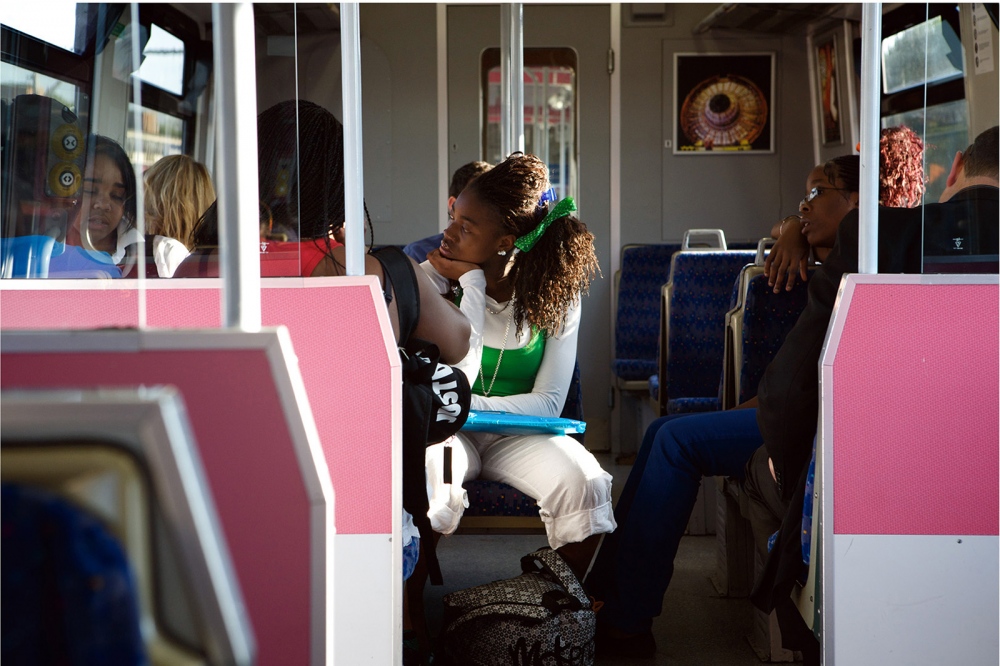 Girls on the train, Hackney Central, 2008 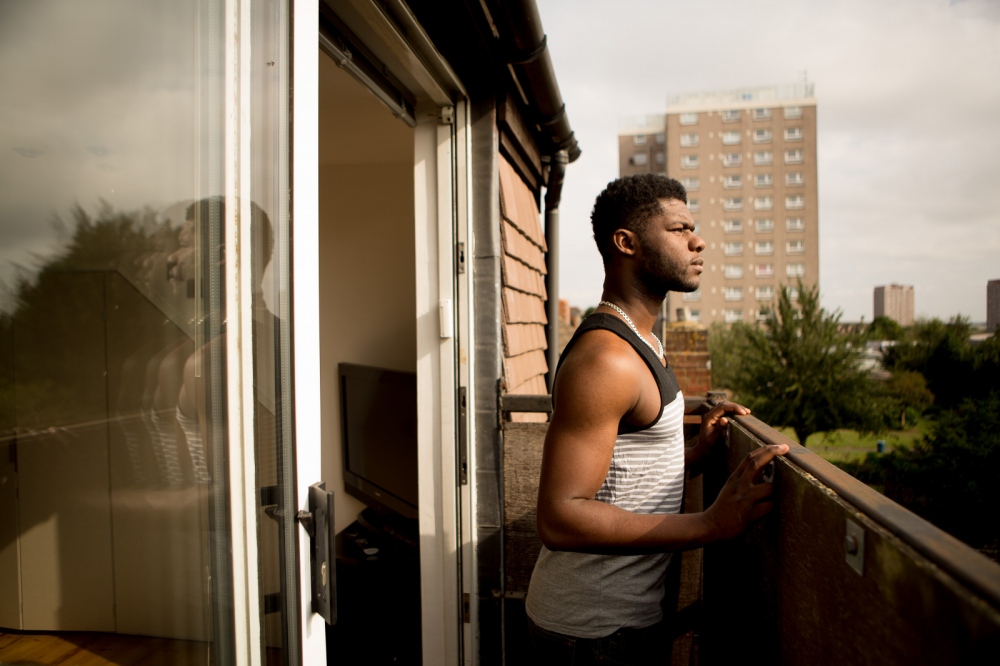 4 of 22 © 2021 Nicola Dracoulis
Junior looking out from the balcony of his house, Erith, 2015
Junior, always looking to secure his future, bought a house with his girlfriend Munjeet when they were both 23 years old, they lived on tins of tuna for 3 months to get the deposit together. Growing up in a council estate, he had never imagined being able to own his own property. Although his house is almost an hour on the train from Hackney, Junior is happy to be surrounded by more trees than concrete. He says his heart will always be in Hackney, he’s even on the board of the Shoreditch Trust overseeing community projects in the area, but that because of the gentrification, Hackney is not for people like him anymore. 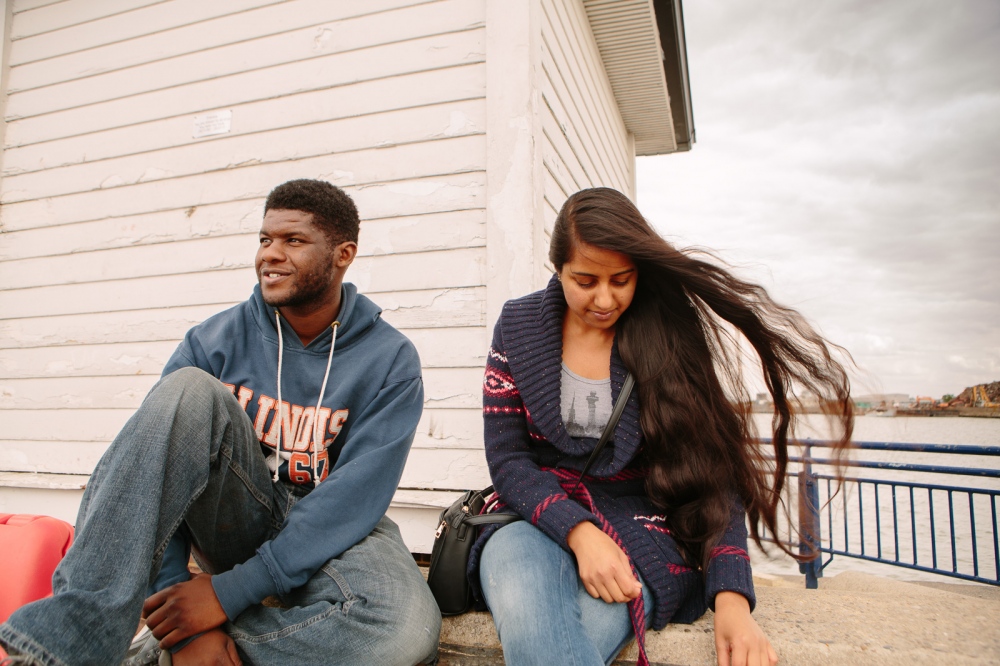 5 of 22 © 2021 Nicola Dracoulis
Junior and Munjeet, on the Thames near their house, Erith, 2015
Junior and Munjeet met at University, 3 years later they bought a house together. Unfortunately, both their families could not accept this cross-cultural relationship. They have suffered a sort of exile, Munjeet’s parents who are Punjabi, refused to speak to her for 2 years. Luckily, Junior’s family have come to embrace and love Munjeet, but Munjeet’s parents still cannot accept the thought of a black Nigerian son-in-law from Hackney. Munjeet now visits them once a month in an attempt to rebuild bridges. 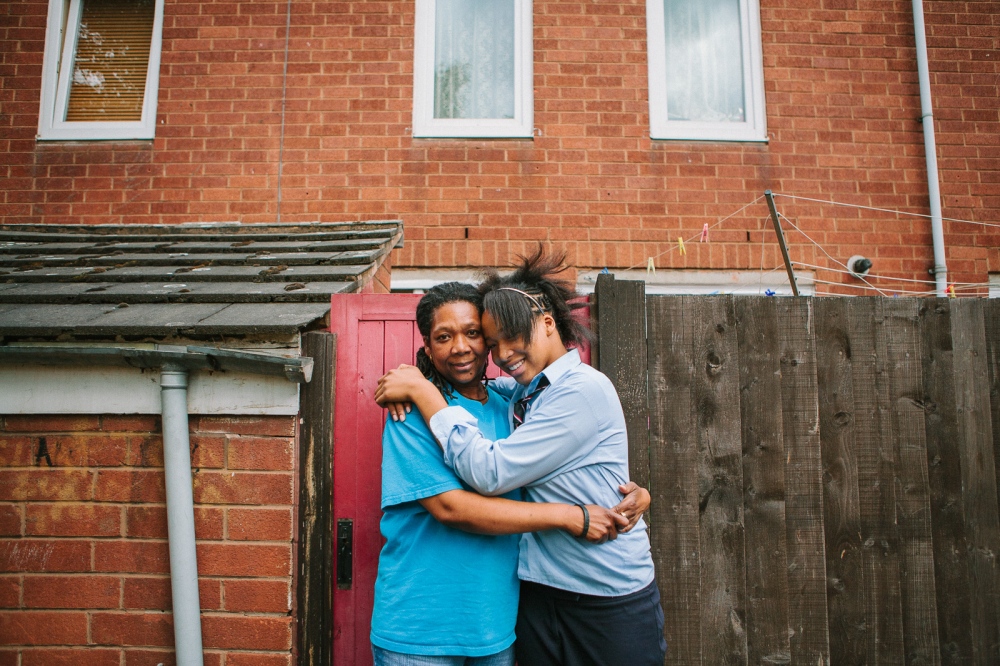 Amy and her mum, Louisa outside their house, Clapton, 2008

Originally from the Caribbean island of Monserrat, Amy’s mum Louisa has single-handedly raised 5 children in Clapton. Louisa has made sure her children have a connection to where they came from, Amy says this has helped build up her sense of self. “Mum has always tried to show me that this (Hackney) isn’t the be all and end all” 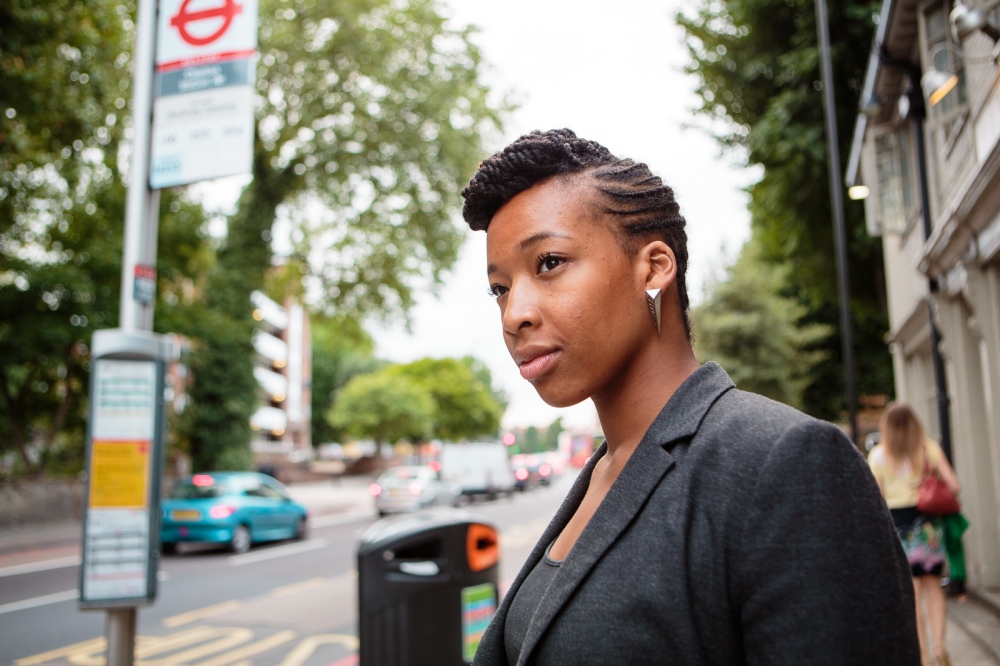 Amy at the bus-stop, Lower Clapton Road, 2015
I photographed Amy at this same bus stop in 2008 when she was on her way to school. A studious teenager, who went on to study geography at University, she found that her real love was in youth work. She now works in a young offenders prison as a support worker counseling young men on how they could better their life when they’re released. “Being black is a stuggle… and being in Hackney you need to inspire yourself to work more” 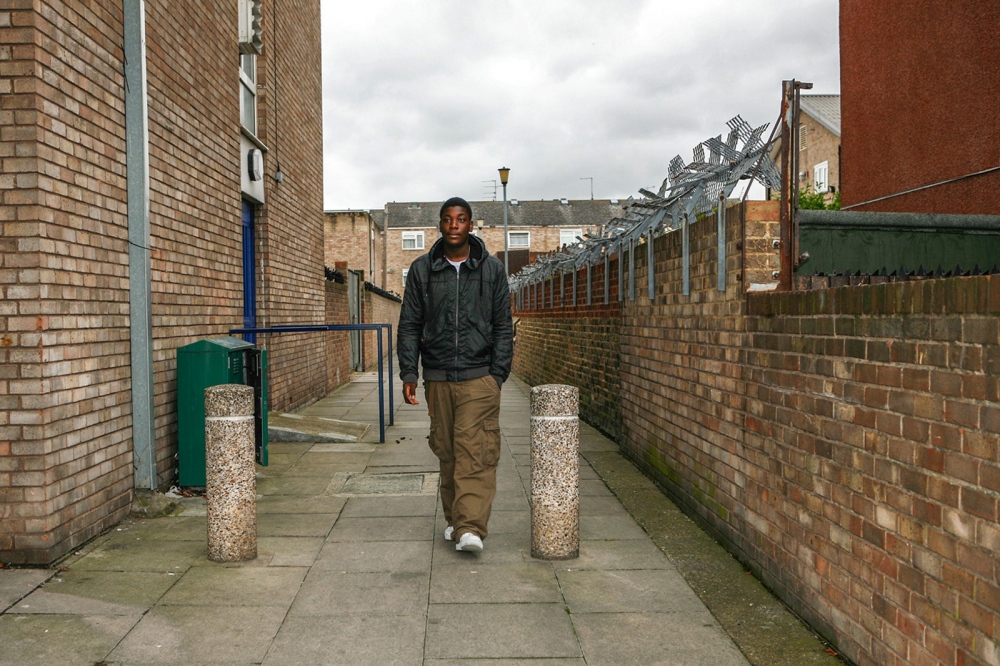 Amos walking to the youth centre, Clapton, 2008
An excellent musician and big hearted teen, not long after this photo was taken Amos was kicked out of school, over a silly incident with a firecracker…this caused him to be socially excluded and lead him down a risky path where he got involved in gang-related activity. Thankfully this was temporary, and he knows he’s lucky to have avoided anything bad happening to him. “It was hard for us young black boys, a lot of us lost didn’t really believe that we could do more” 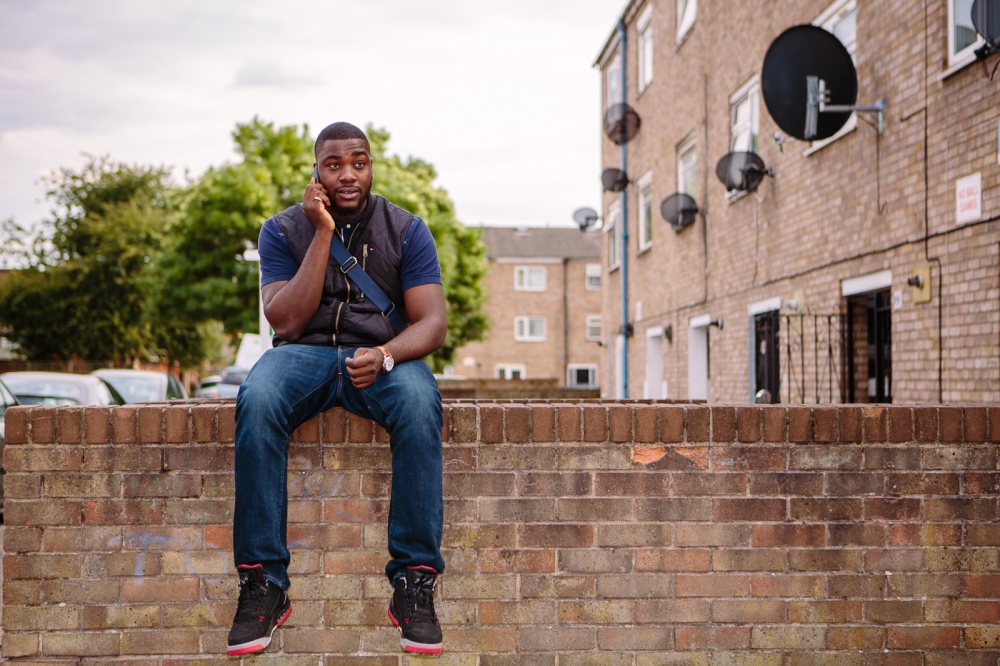 9 of 22 © 2021 Nicola Dracoulis
Amos on the phone, Clapton 2015
Looking at the old photos, we realized it was exactly seven years to the day that I photographed Amos last time, he told me how in 2008 he’d been on the verge of a turning point for worse back then, and this time he’s at a turning point for the better. He has a positive outlook and is working to secure his dreams. Working two jobs one as a musician for church events where he’s “more spiritual thing than religious” and another as a bouncer in clubs he is in the process of setting up his own security firm. 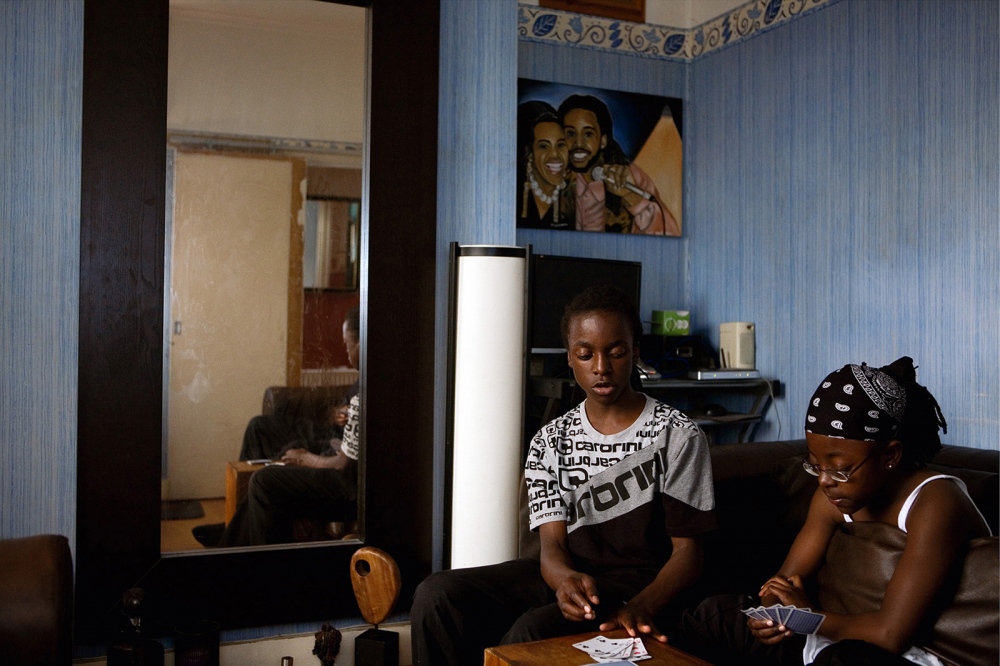 Joel and his sister playing cards in their front room, London Fields, 2008

From a family of 8 brothers and one sister, living on the edge of London Fields, Joel was geographically in the middle of one of the worst and most well-known turf wars in London – the London Fields Boy vs The Holly Street Boys. Although Joel was never in a gang, the violence affected his life daily. Here he was inside playing cards with his sister because they didn’t feel safe to play outside, he had to take long routes around the suburb to cross it due to the risks of being seen in the neighbouring streets near Holly Street. 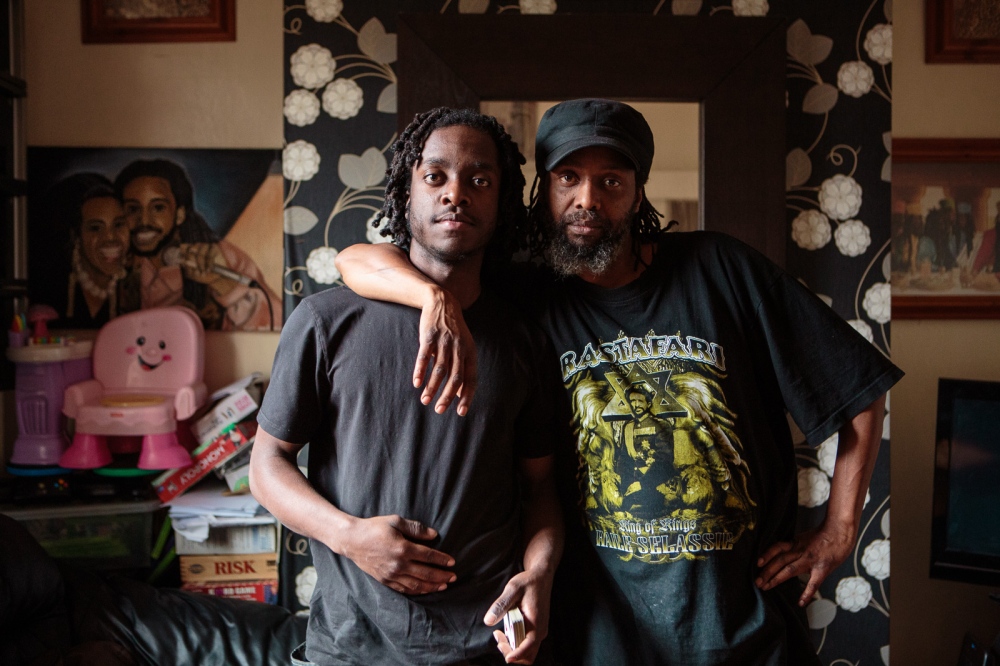 11 of 22 © 2021 Nicola Dracoulis
Joel and his Dad, Iyan in their front room, London Fields, 2015
At 20 years old, Joel is now an apprentice electrician with a view to getting into the property game of refurbishing houses and selling them for profit. Rastafarians, there family is peace loving and dedicated to their community. They live in a three storey Victorian terrace in a spot that became the first and most gentrified area of Hackney despite ongoing gang violence. Shootings in London Fields only became an issue once the middle class white people moved in. 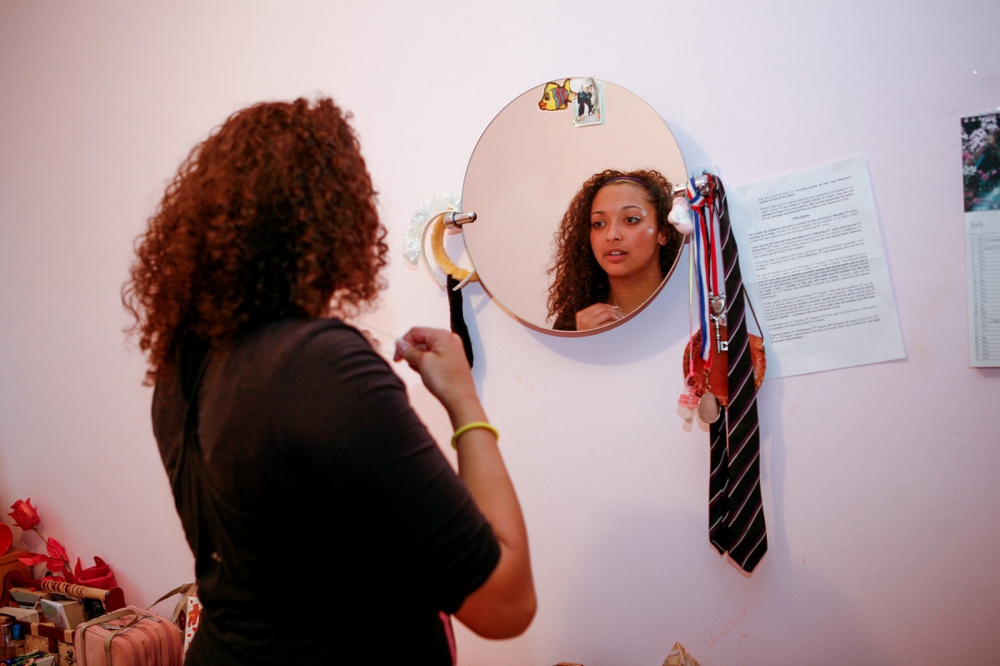 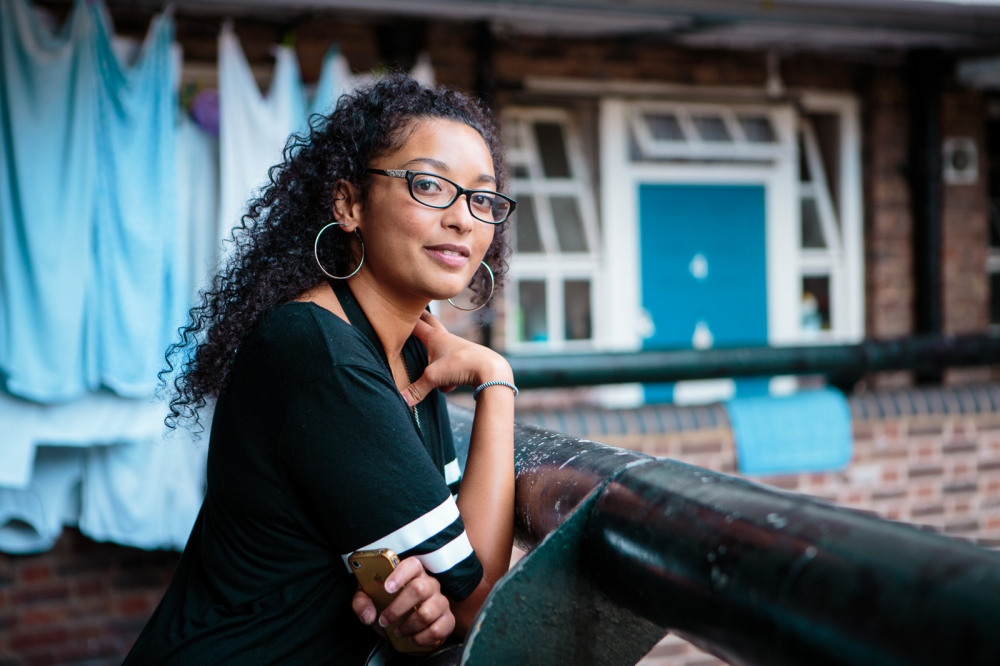 13 of 22 © 2021 Nicola Dracoulis
Raquel outside her flat, Hackney Downs, 2015
Now 24 years old, Raquel is at a bit of a cross roads in terms of her future, she works in event management but as a warm chatty person feels she’d be better off in a career related to helping people. She loves her neighbourhood and is happy that Hackney has become cleaner and quieter in recent years but is upset that it is at the expense of long time local residents being priced out of their own homes and business, and that the rich cultural mix of people is being threatened. “That’s what I love about Hackney the different types of people, it’s literally everyone from everywhere” 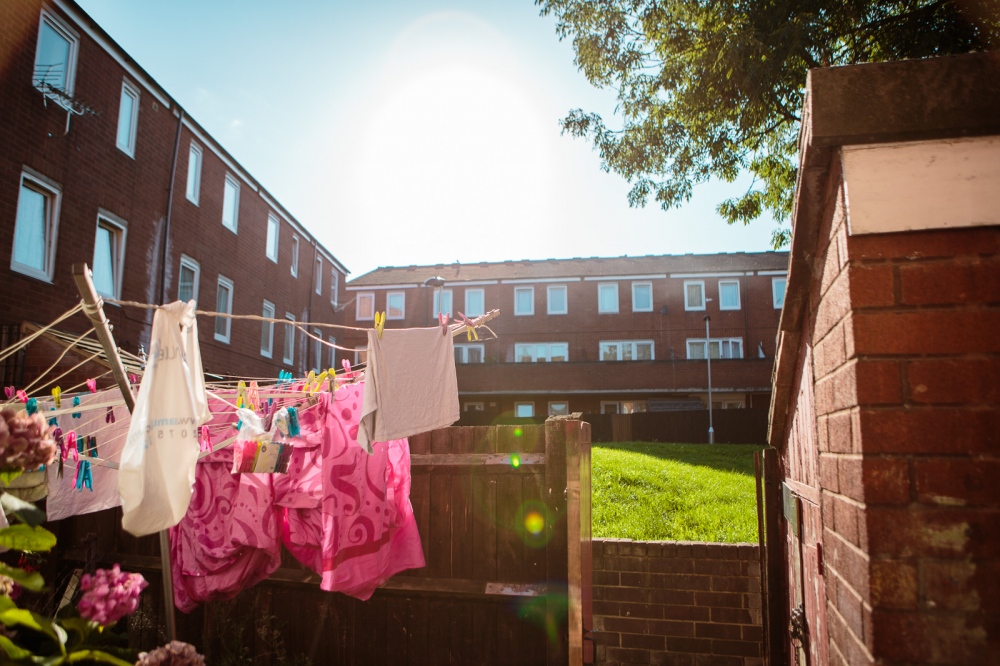 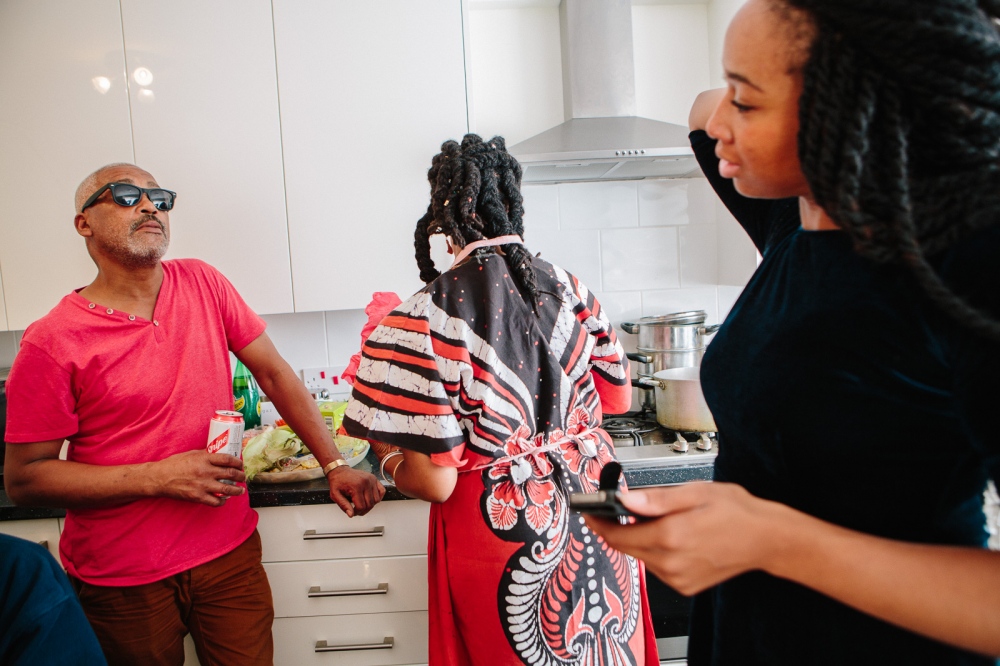 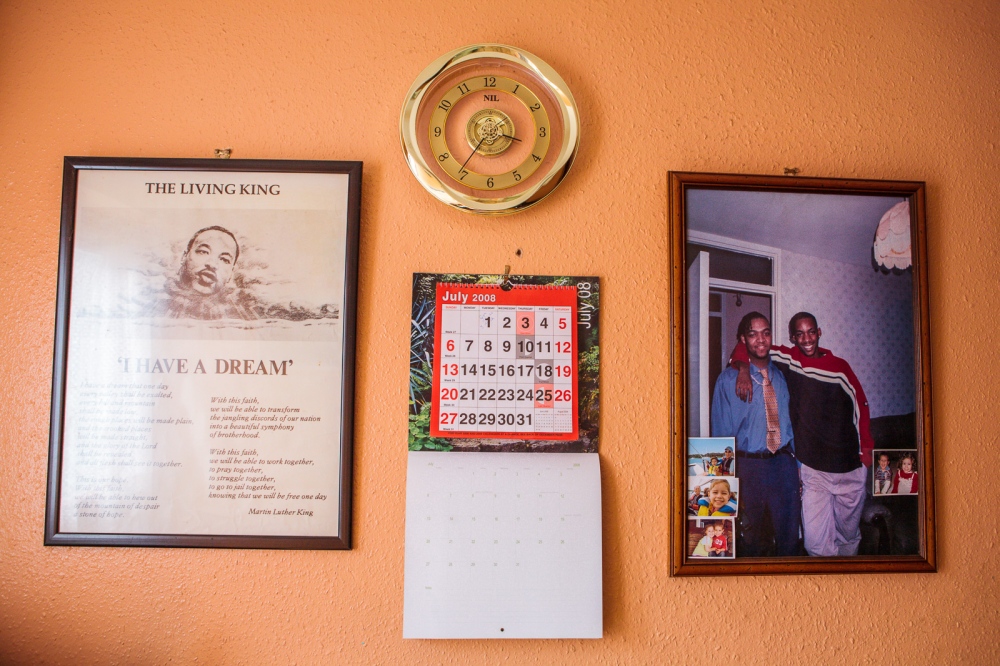 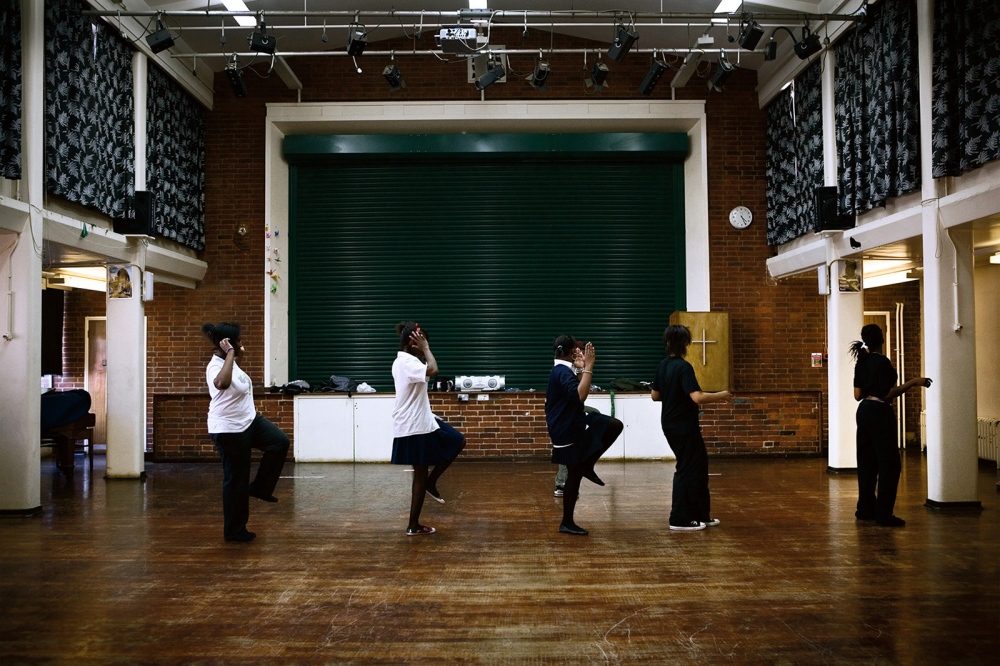 Amy and the girls in dance class after school, 2008 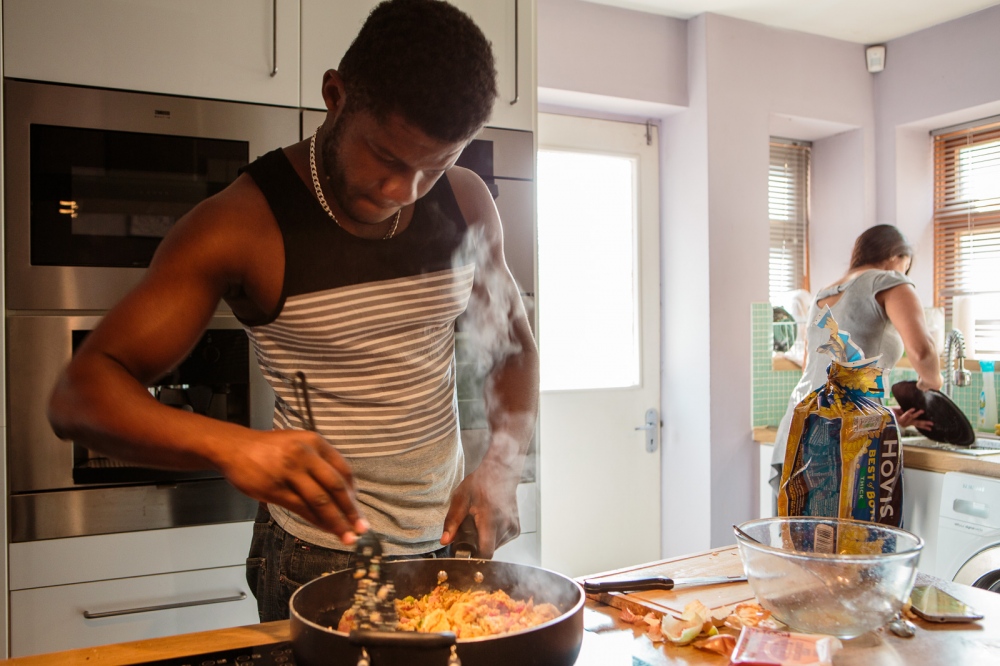 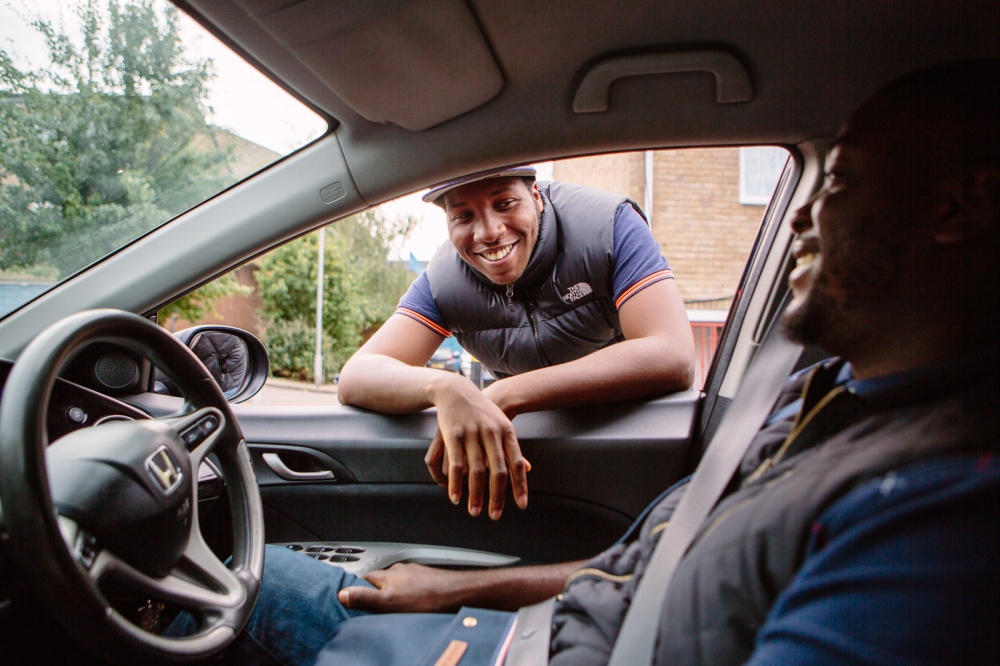 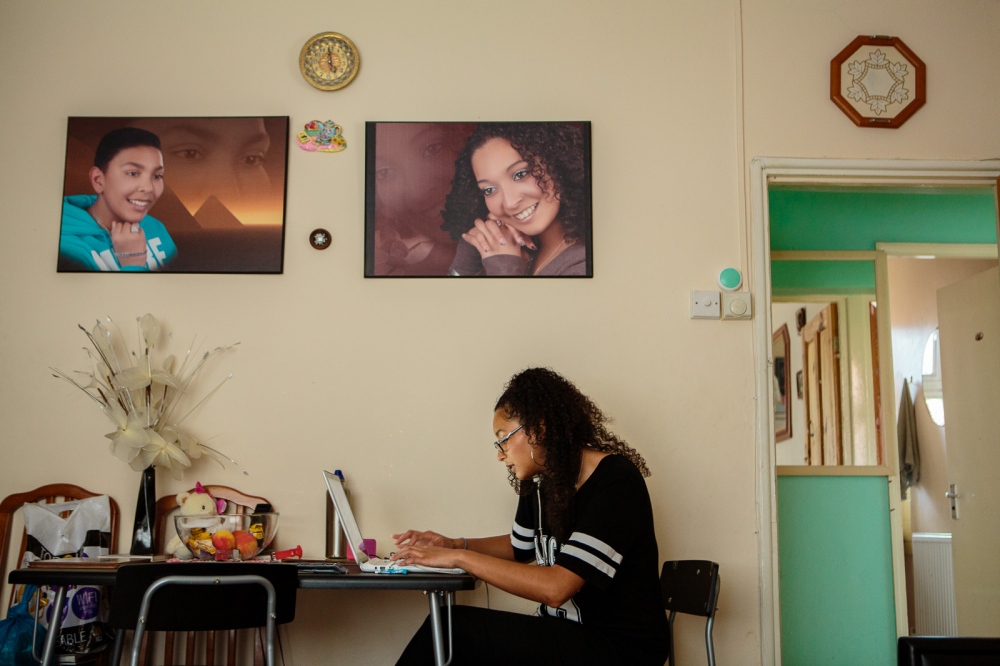 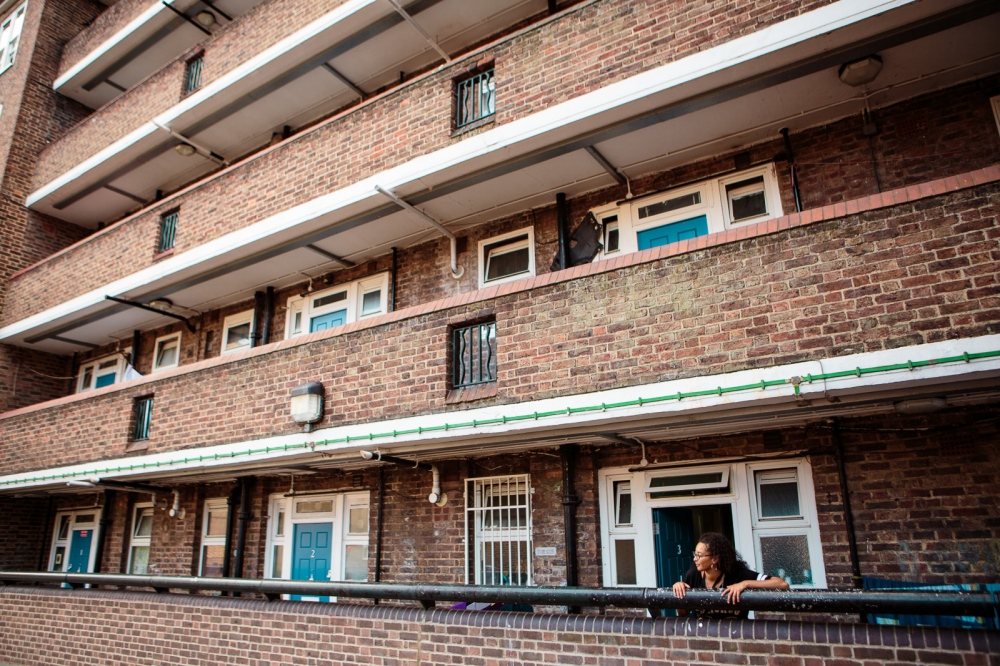 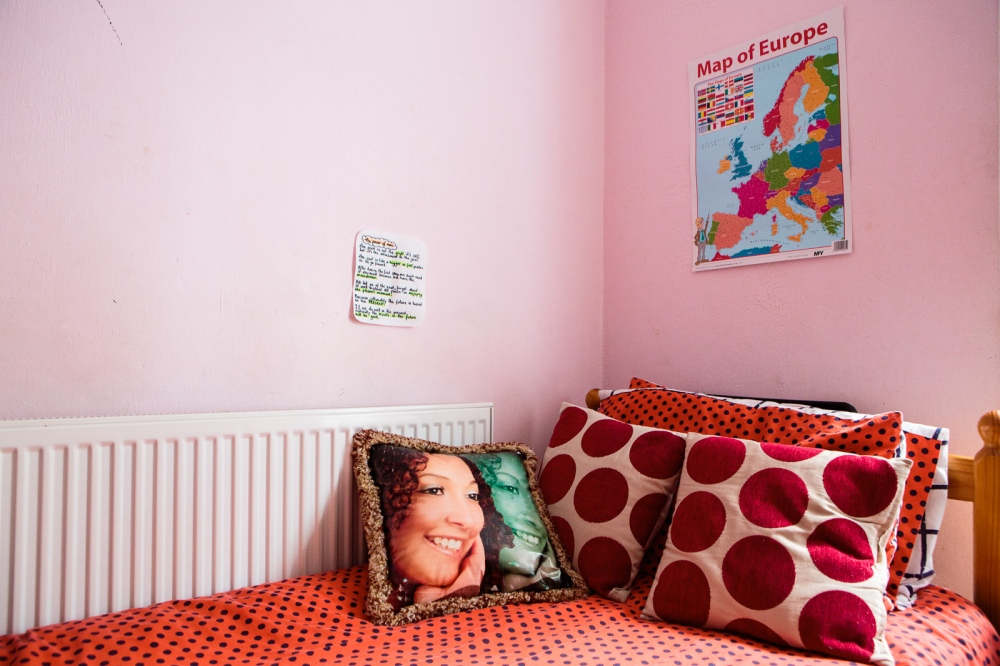 Living in the Middle of Hackney presents the lives of 5 young people in one of London’s most marginalized suburbs. I lived in Hackney for 8 years, during this time I was commissioned to photograph a group of teenagers involved in out of school activities that had been set up for young people ‘at risk of exclusion’. This risk existed for a combination of issues, most young people were from poor families, the area was under serviced for young people, and with nothing better to do, many young people, mostly boys, were getting drawn into gang culture. Violence perpetrated by gang culture was affecting all their families’ lives. People like me, white and middle class, could live without having much idea of what was going on except for the sensational Hackney Gazette headlines reporting the latest in local violence.

In the UK Peace index 2003 – 2012, Hackney was rated 3rd least peaceful suburb in London. It also stated that 70% of Hackney households experience deprivation in education, health, employment, housing, and health.

I spent a summer in 2008 with 7 teenagers, in 2015 I returned to see where they are at now in their 20’s and with Hackney in the midst of rapid gentrification. I was able to catch up with 5 of them.

My work attempts confront negative stereotypes surrounding underprivileged youth. The seemingly fixed co-ordinates of race, class and gender are all subject to pressure. Eschewing sensationalism for detail, I want to make visible the everyday heroics of normal people and recover true stories of real lives. By juxtaposing images of past and present, the project encourages audiences to question assumptions about how the future unfolds for ourselves and others. As some goals move forward, others are re-evaluated.

This project is very personal to me as I lived in Hackney for 8 years, it is my second home, I really care about what is happening within that community and especially in light of the massive changes due to gentrification, redevelopment and changes in social services that have occurred in the last 7 years. The summer in 2008 that I spent with the people in these projects, was a special and pivotal period for all of us.

This project is being exhibited at the Head On Photo Festival in Sydney, Australia, 29th April - 21st May 2016