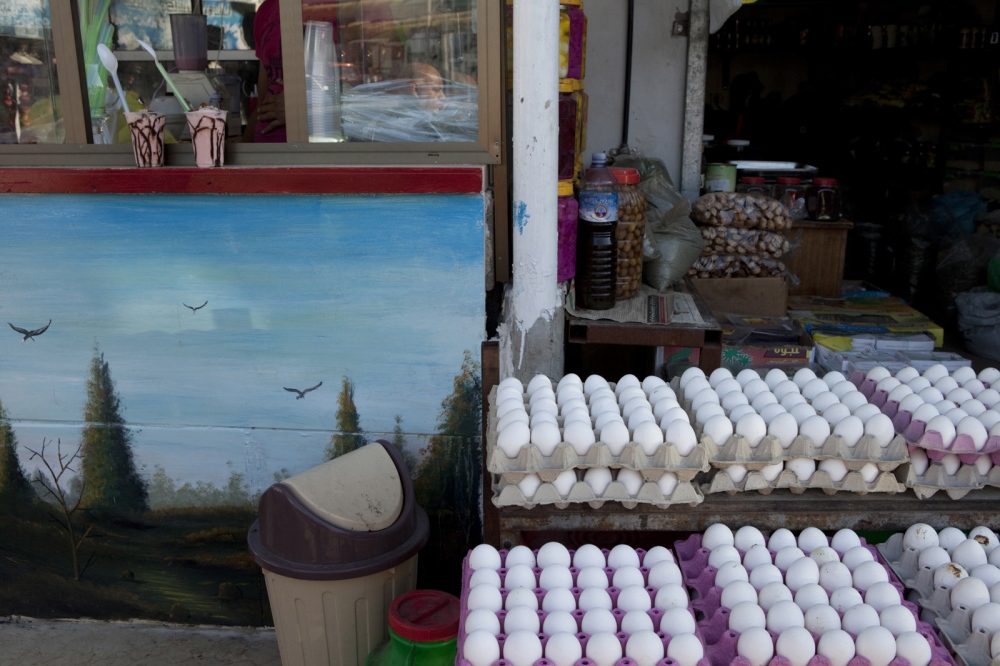 The Palestinian village of Barta'a is bisected by the Green Line, but sits 5 km on the Israeli side of the Barrier. The milkshake kiosk on the left is Palestinian, and its owners have green ID's, which prevent them from moving into Israel proper. They can however move inside the village, allowing them to buy eggs from the Israeli Arab store on the right. 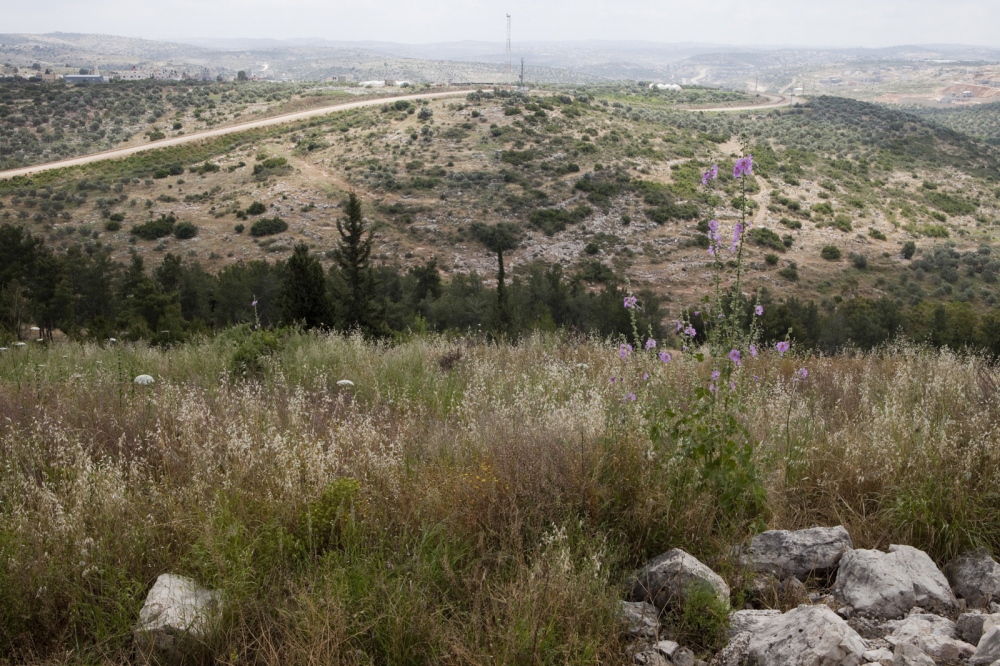 The view looking east across the West Bank from Hezi observation point - a popular barbecue spot for Israelis at the weekend. The Green Line runs along the valley bottom right to left, as the separation barrier (the track & fence running across the hill opposite) snakes out into the West Bank in the distance. 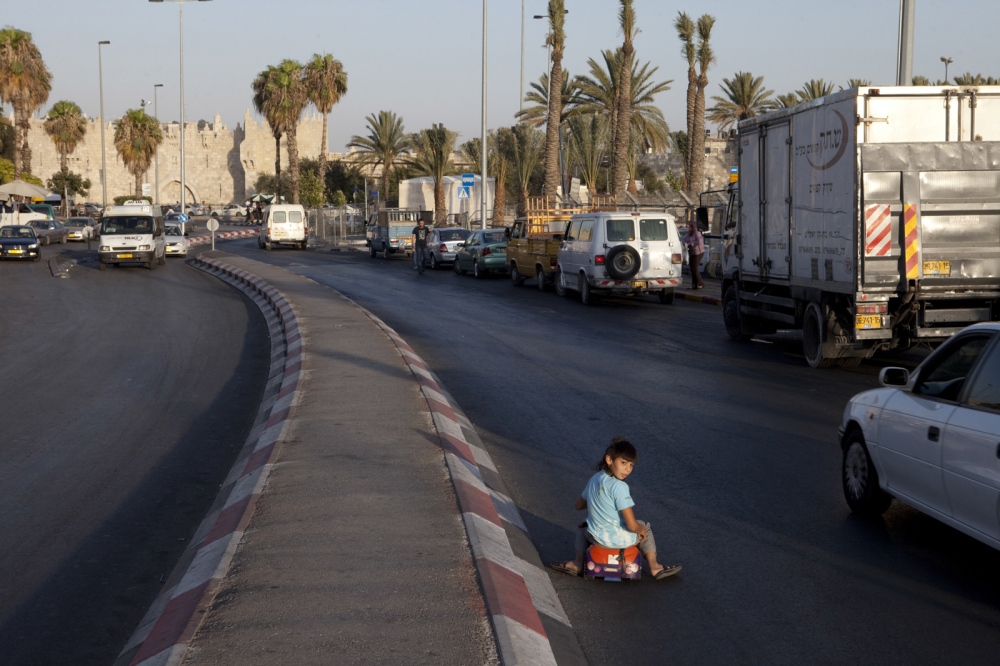 The Damascus Gate of Jerusalem's Old City marks the beginning of Palestinian East Jerusalem. The Child in the road sits on the old Jordanian front line, to his right, 100 metres of no-man's land, before Jewish West Jerusalem. 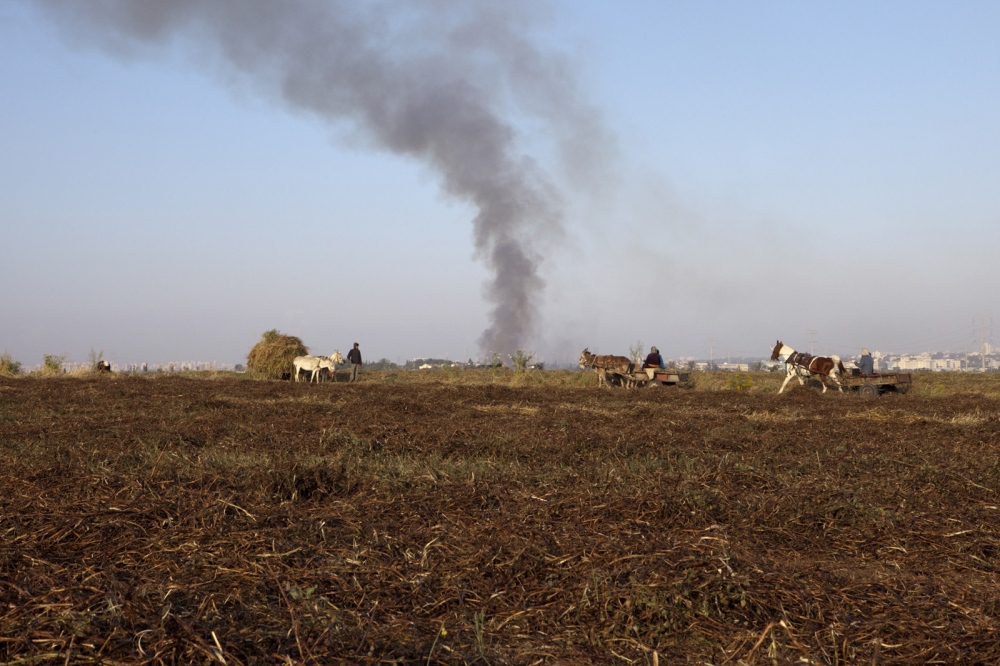 A fire burns beyond a field, as Palestinian farmers cross the invisible line, that pases in the middle of the field, to gather grass for their donkeys. Viewed from the Green Line looking back into Israel. 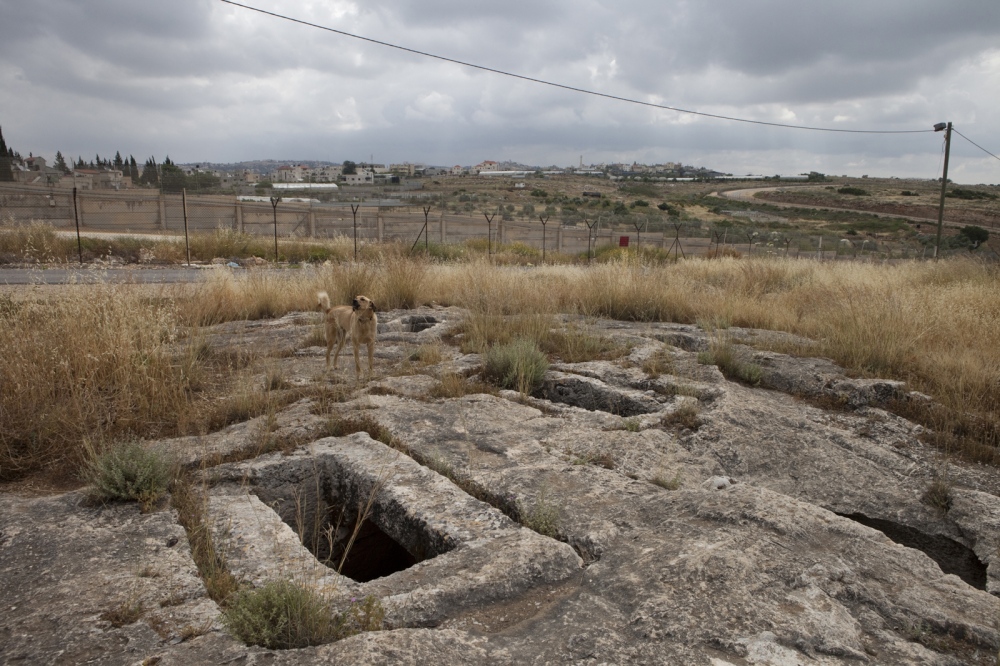 A dog barks over ancient graves, in the Israeli village of Mattan. The village's perimiter fence is also the Separation Barrier and at this point runs along the Green Line 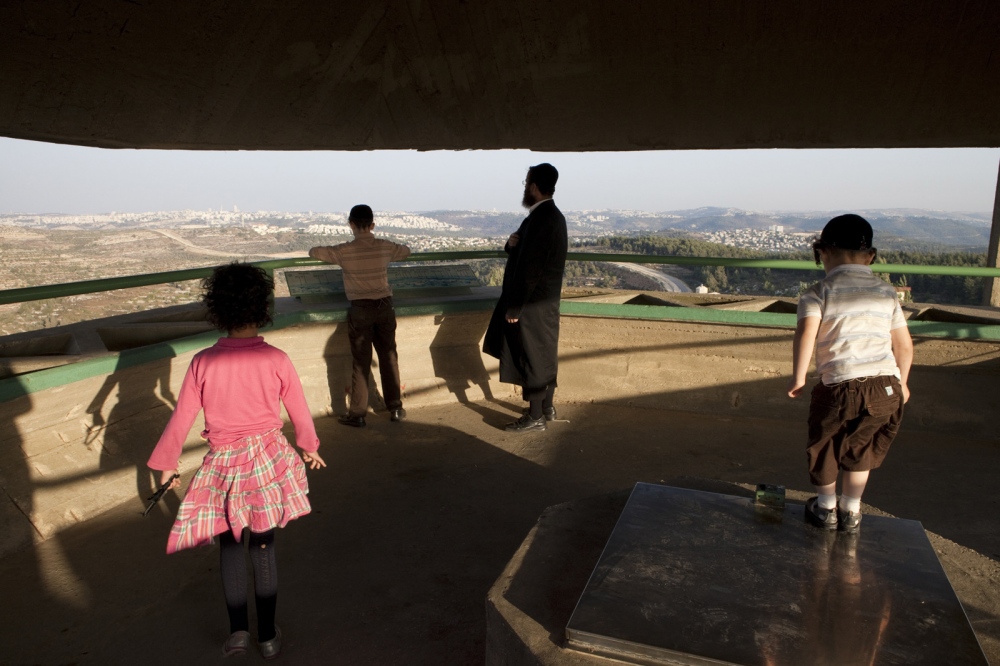 An orthodox family on a day trip look out from a tower in the Israeli settlement of Har Adar towards Jerusalem. Situated just over the Green Line which runs along the tree line (and for a while the barrier) in the background, Har Adar is one of many settlements designed to expand Israel's 'Jerusalem Corridor'. 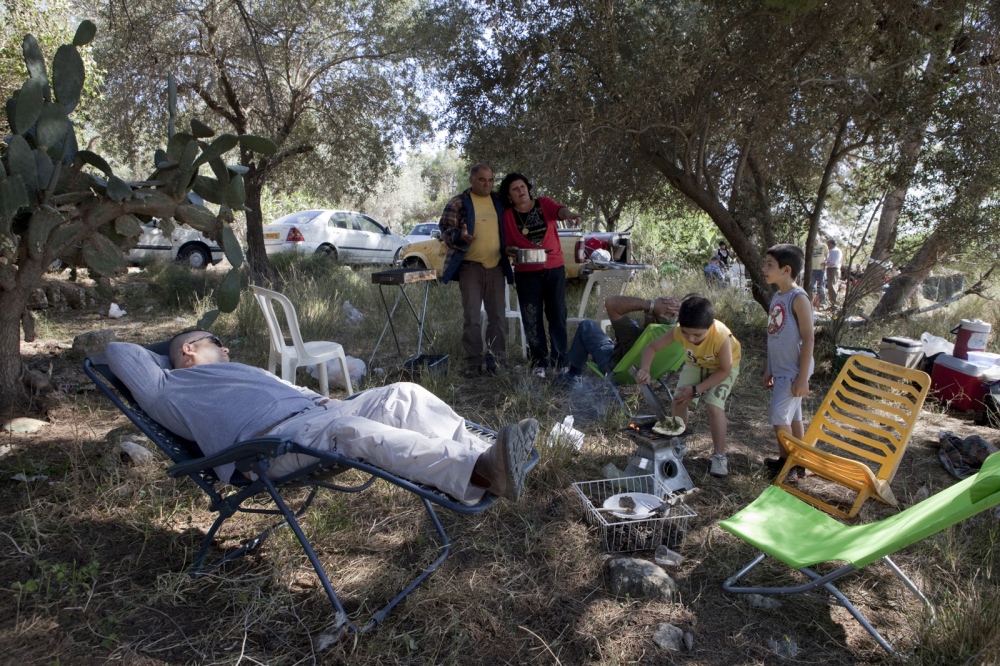 The typical Israeli celebration of Independence Day - a barbecue in the country. The national park of Ben-Shemen sits on the Green Line, the Israeli side starting from the edge of the treeline to the right of the image. Many Israeli forests in this area were planted on demolished Palestinian villages, and most visitors are completely unaware of the place's history or significance. 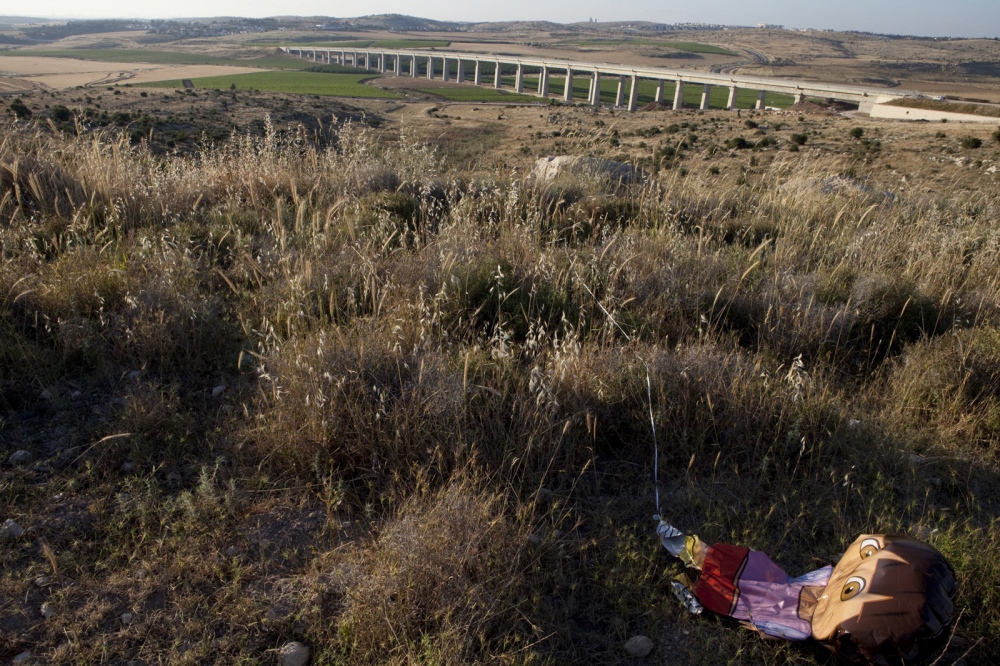 Israel's new high speed rail line running from Tel Aviv to Jerusalem is under construction. The Green Line runs from left to right along the valley bottom, crossed at 90 degrees by the bridge. 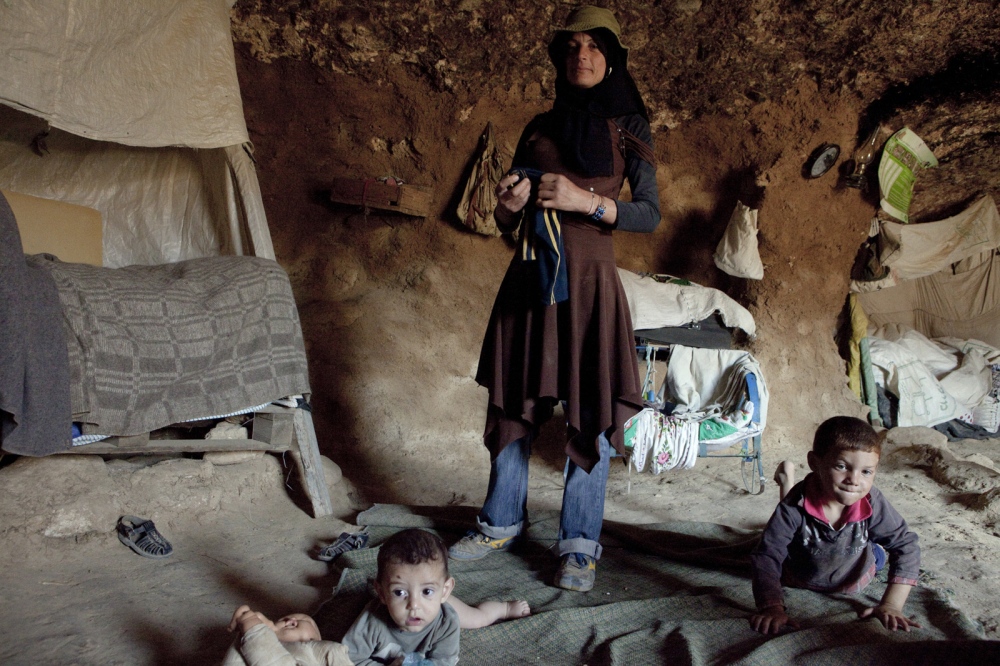 Ensaf Abu Aram's home is a cave in the tiny village of Markez; at the edge of the Hebron Hills and Negev desert. She has 5 children, and her husband scratches a living farming the desert. The family used to have another cave home, located 10 metres away, that sits on the Israeli side of the Green Line. Despite the fact there is no barrier here, they were forced to abandon it. This area of the West Bank 'Area C' is under Israeli control. 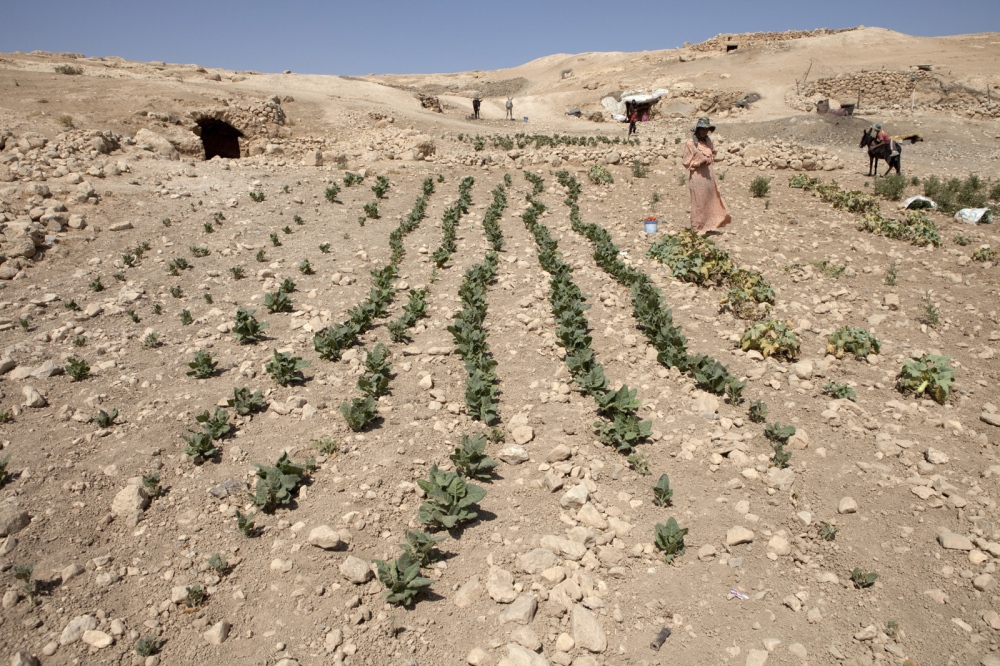 South Hebron hills. Palestinan farmers tend rows of tomato plants which mark the Green Line. The cave on the left was a family home, but has been abandoned as it sits inside Israel. Instead, they live in the cave on the right, where they say they receive less harassment from Israeli soldiers. 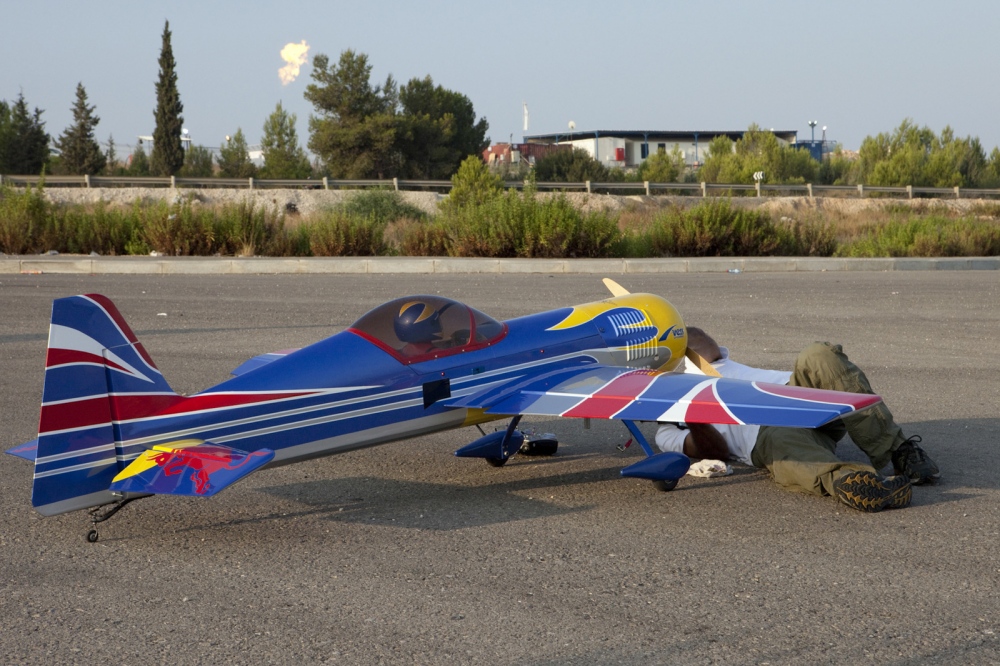 Model airplane enthusiasts use an abandoned road to a settlement as a runway. In the background is the flare from Israel's 'Meged 5' Gas and oil plant. The Green Line runs from left to right through the picture. 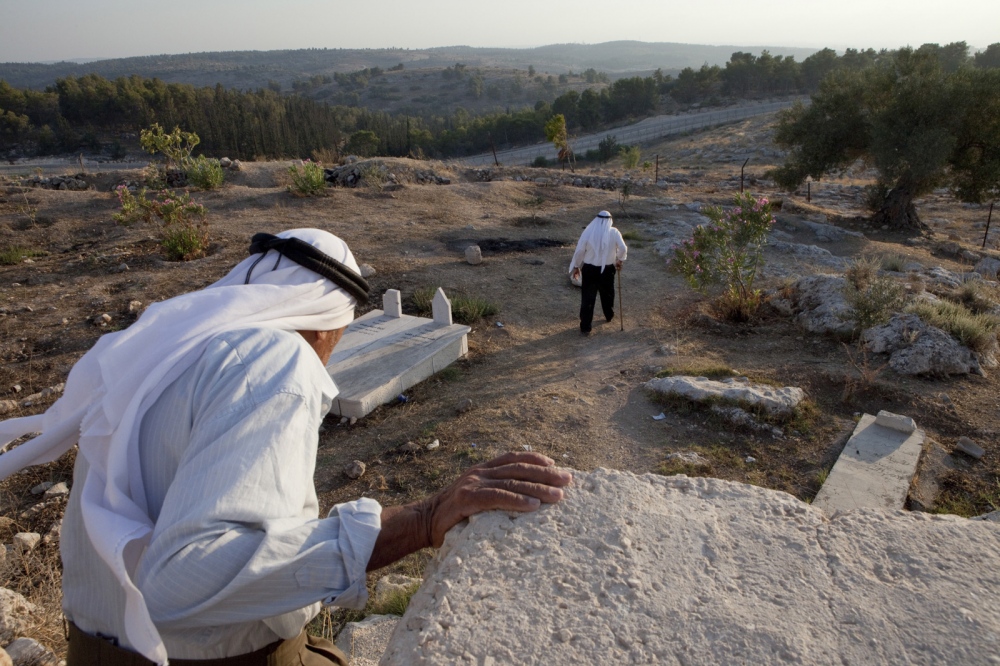 After a long but successful fight, the village of Budrus is one of five places where the Green Line was left on the Palestinian side of the barrier. However villagers like Ahmed Musa and Muhammed Hanoun are forbidden from coming within 100 metres of the barrier. The Green Line passes from Left to Right near the big tree at the right side of the frame. 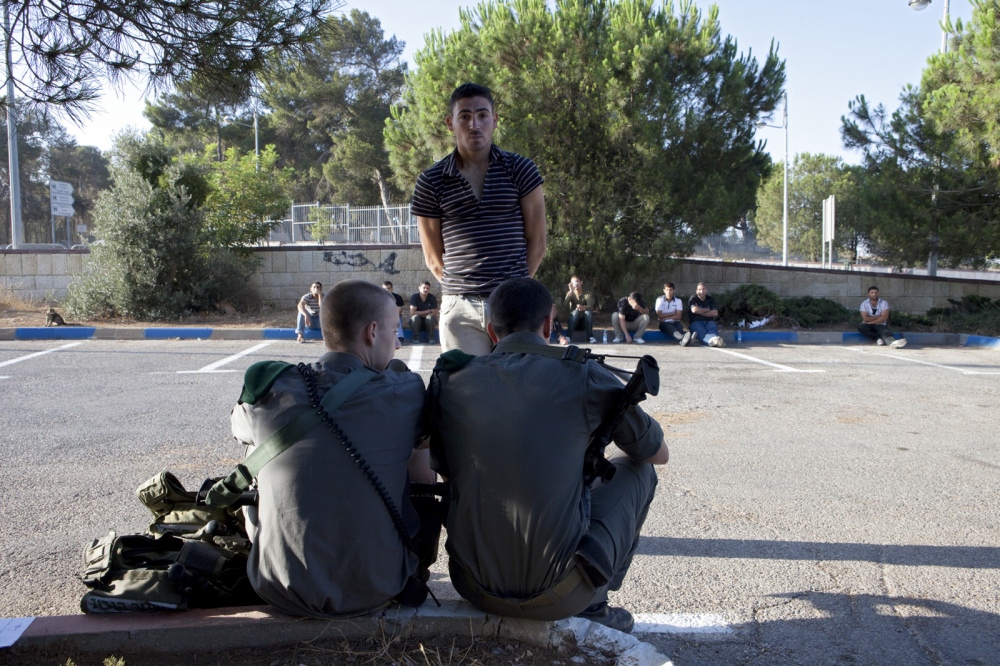 The enclave of the Hebrew University sits on the top of Mount Scopus in East Jerusalem. Israeli paramilitary 'Border Police' round up West Bank Palestinians who have crossed into Jerusalem illegally, looking for a days work. Those caught for the first time will be returned to the checkpoints, those caught more than once face between 3 and 6 months in jail. 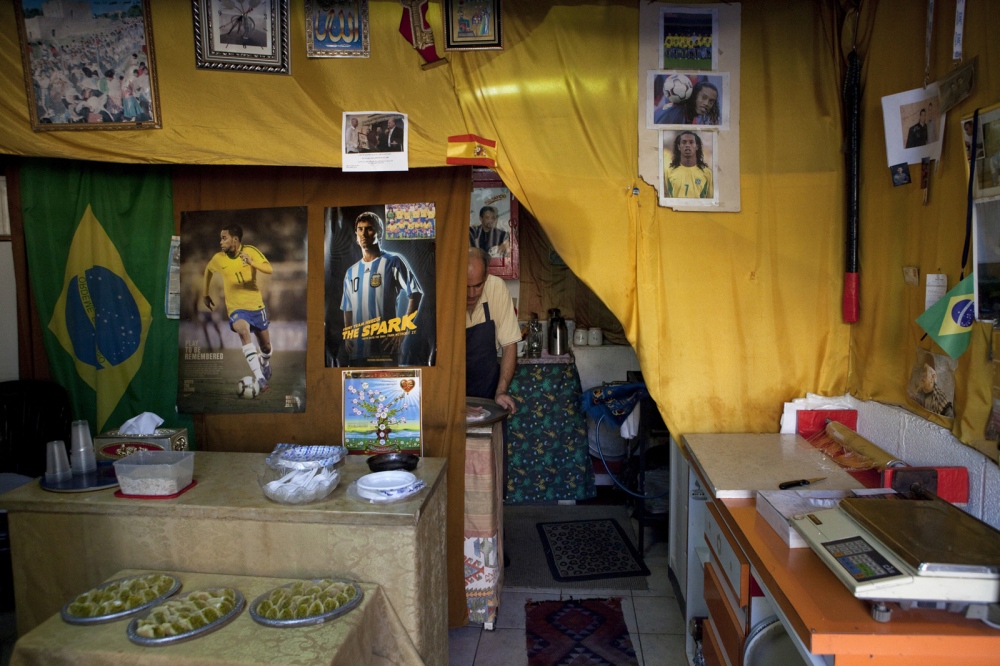 Alian Karim makes sweets during Ramadan in his shop in Beit Safafa, a wealthy Arab suburb of Biet South Jerusalem. The Green Line passes along the road in front of his shop's door, from where the photograph is taken. 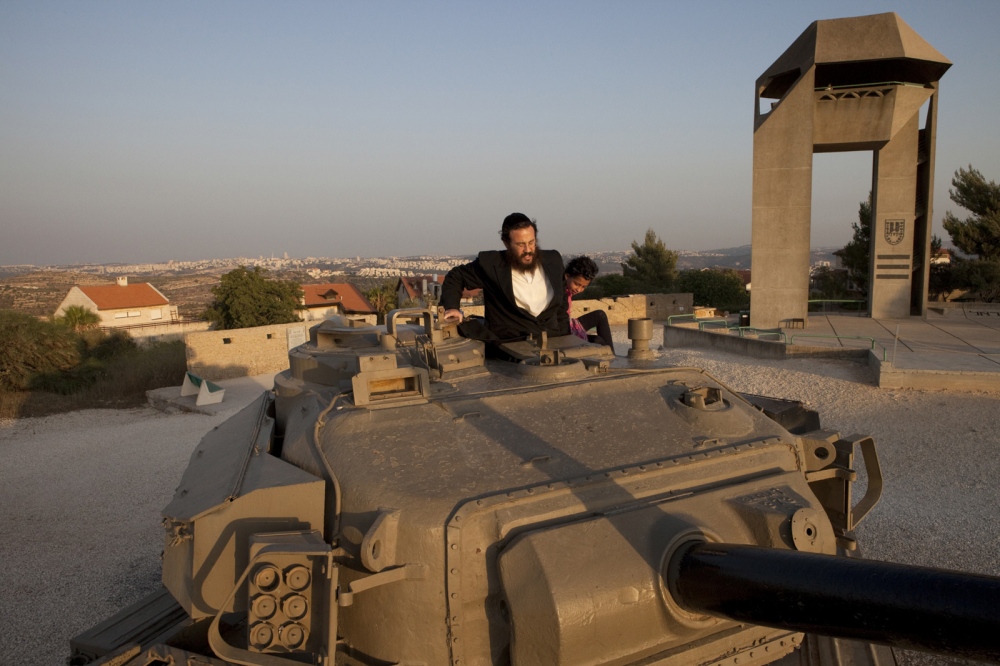 An orthodox man climbs into a tank, at a monument in the middle of the Israeli settlement of Har Adar ('the Radar' - an old British radar post). The Green Line runs between Har Adar and the Israeli villages on the Horizon. 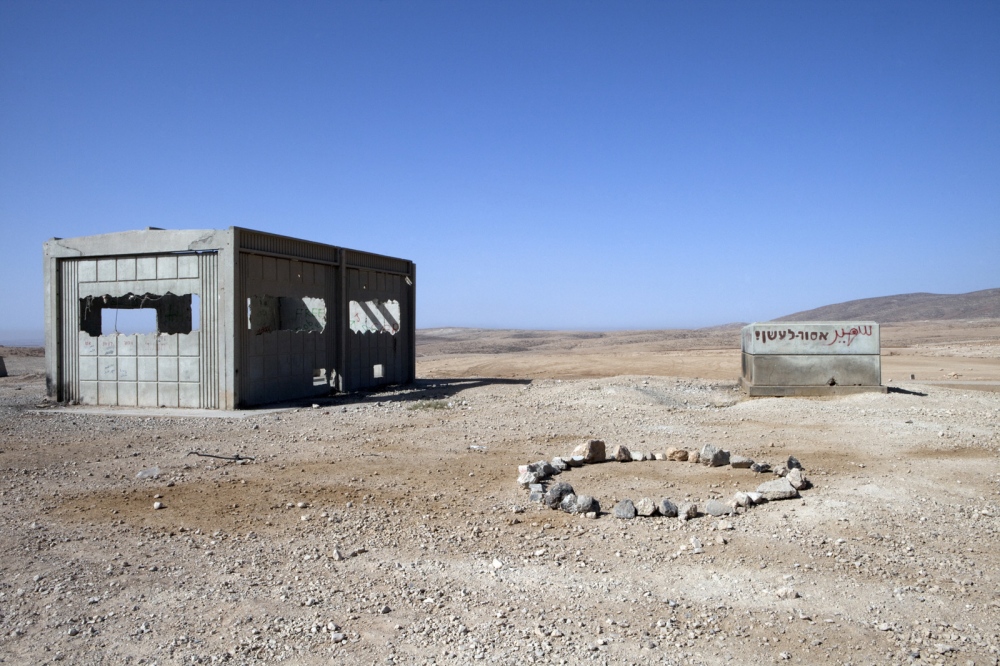 An abandoned IDF base sitting on the Green Line; which runs to the south Hebron Hills in the distance 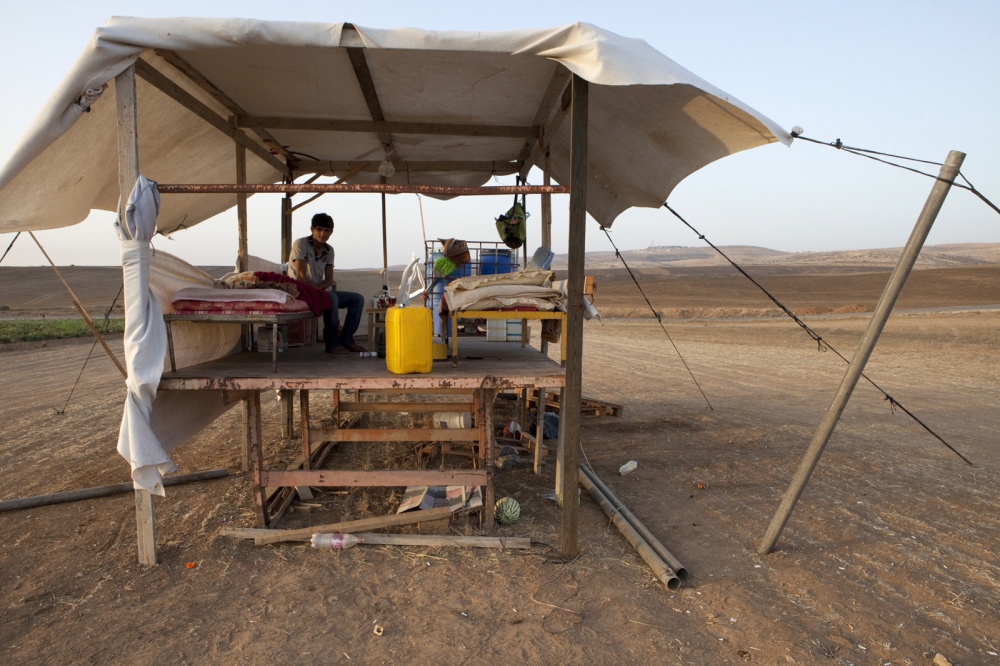 Mohammed, a Bedouin, guards a lucrative Israeli watermelon field, 400 metres from an unfinished section of the separation barrier. The Green Line runs along the bottom of the hills in the background. Local police say Palestinians cross illegally into Israel around this area. 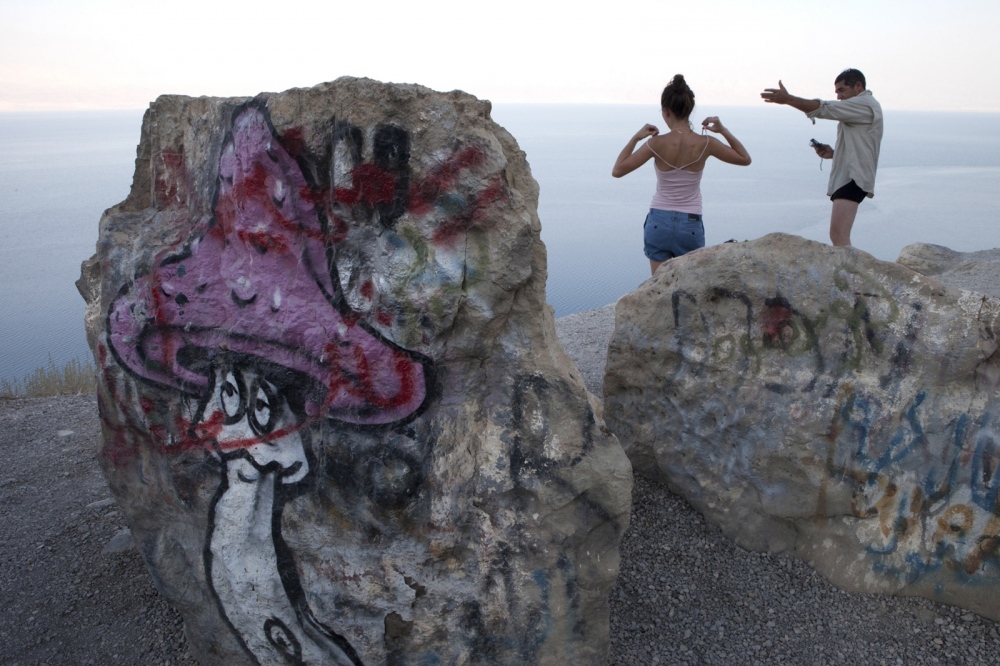 Israeli Tourists pose for photos at a viewing point on route 90 on the coast of the Dead Sea. The far shore is Jordan. 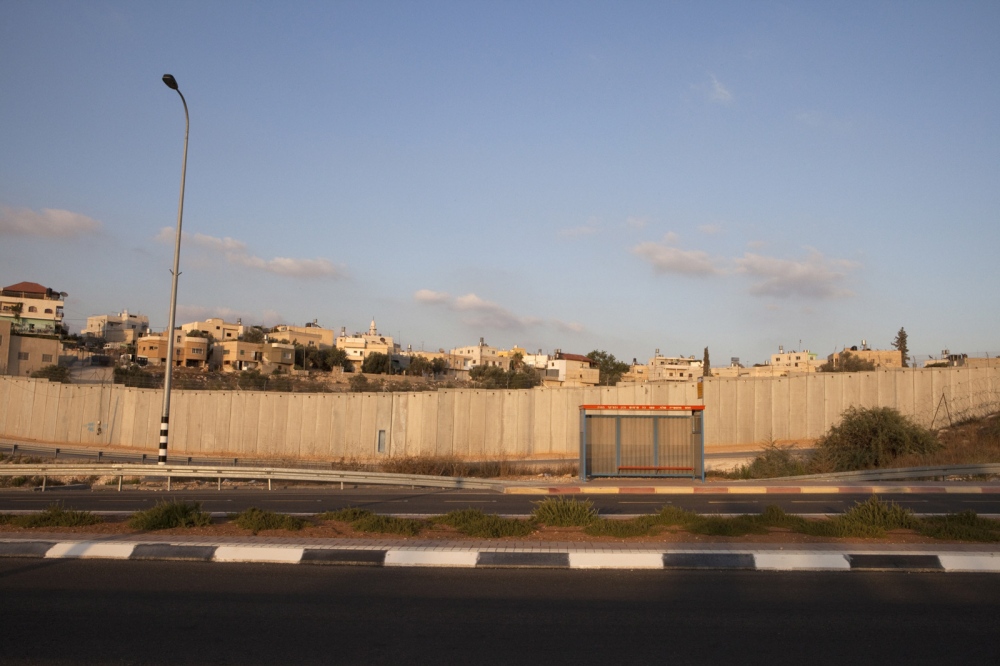 An Israeli Bus stop on route 358. The Palestinian village of Beit Atwa is located behind the barrier and the Green Line 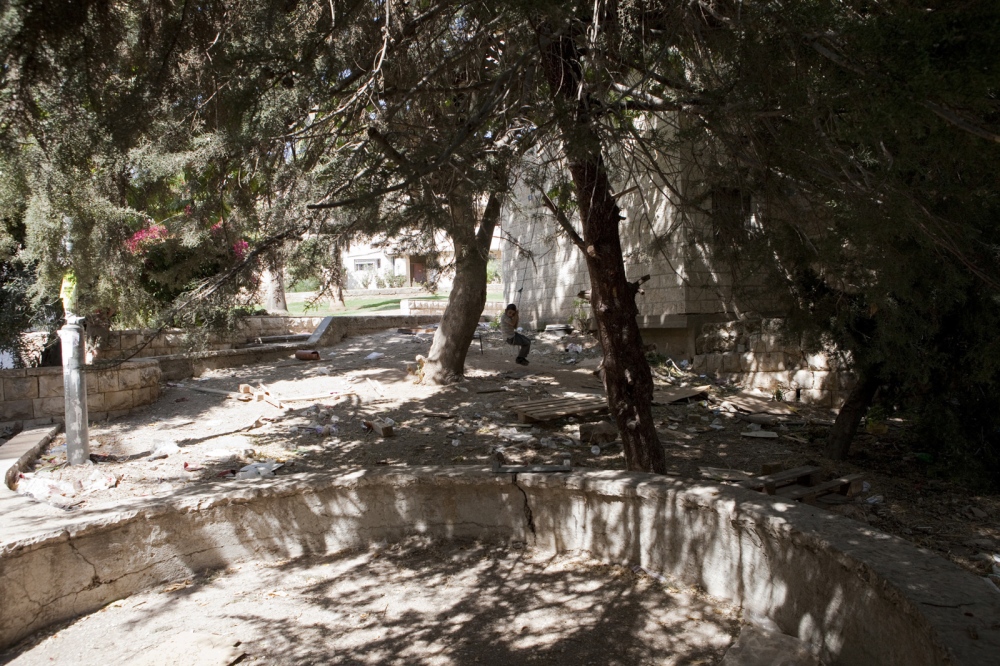 An orthodox boy plays on a swing in the slum neighborhood of Ma'alot Dafna, Jerusalem. Built after 1967, the Green Line runs through the middle of the estate. 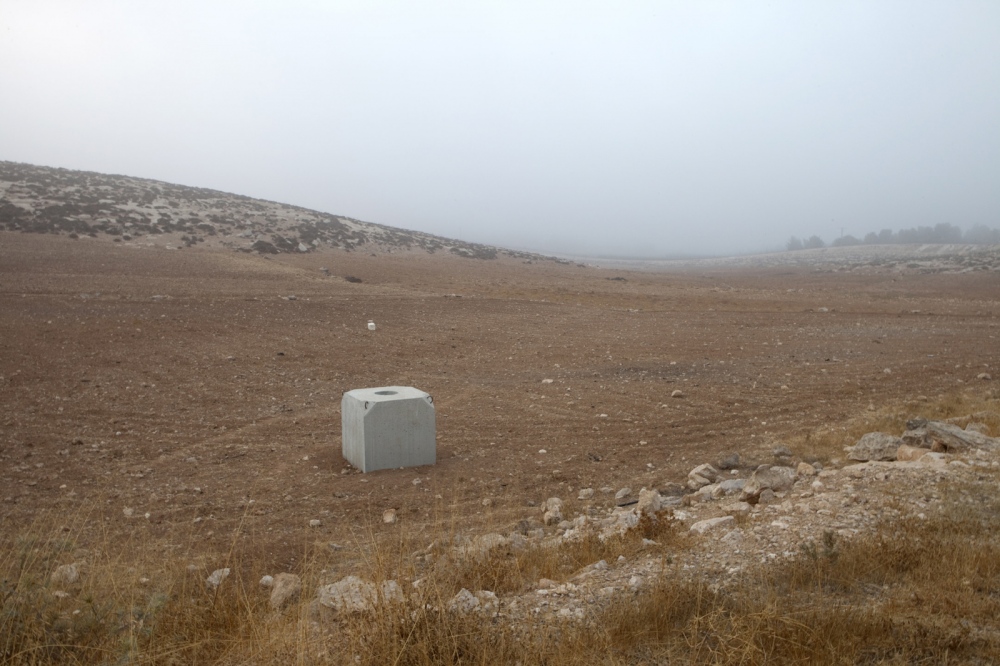 Looking south over a Palestinian field in the south Hebron Hills. The trees mark the Israeli side of the Green Line and barrier.

An ongoing photography project documenting the 313 km long Green Line – the ‘invisible border’ between Israel and Palestine. This projectis a first – despite the fact it has been in the headlines for the last 40 years, no one has photographed along its entire length. The Line has been intentionally erased from Israeli maps since 67′, has become invisible on the ground, and is thought of as something of an anachronism by Israelis though remains central to the international community. The work reveals surprising, surreal and sometimes mundane nature of the border: from Jerusalem’s city streets to cave dwellers in the Negev desert, crossing motorways, fields, villages and barbecue spots.

In 1949 the Israeli General Moshe Dayan and Jordanian Colonel Ahmed Sudki El Jundi signed a British Mandate-era map marked with a green pencil line, delineating the Israeli and Jordanian armistice positions, which became the de-facto border, from the northern Jordan valley to the Judean desert.

After the 1967 war when Israel overran the West Bank and began its occupation, Israeli Deputy Prime Minister Yigal Alon issued an order to erase the Green Line from all maps. Since then the Line has become an anachronism, and now runs criss-crossed by the barrier across motorways, through fields, villages, and Jerusalem’s streets.

The Green Line has been intentionally lost in the landscape, and the construction of the barrier has further blurred the location of the border for Israel’s citizens. Few Israelis who cross the Green Line in their daily life know of its precise location. Absurd and mundane activities take place every day on the Green Line: people barbecue, go jogging, and shop without any knowledge of the significance of where they are.

Nevertheless, the Green Line remains the legal reference for the international community, has been the foundation of all peace negotiations for 20 years, and marks the limits of Israeli civil and military law (meaning neighbouring Palestinian shopkeepers, holding green Palestinian or Blue Israeli ID’s, fall under different legal systems).

Today, over its 313 km length there is barely any material evidence of its existence, the Green Line exists more in the mind rather than physical reality.

My aim is to create a body of work that will be the first of its kind. From remote landscapes to infrastructure: houses, roads, bus stops, children’s playgrounds, military posts and parking lots; portraits of Israelis and Palestinians who live and work on the Green Line – farmers, settlers and suburbanites, shopkeepers and soldiers. In each image the Green Line appears: either in the view, or the viewers’ position.

As an Israeli, this project is important to me - the images invite the audience to search the Green Line, and become familiar with the exact nature of one of the world’s most important, complex issues - the details of which are, paradoxically, unknown.

Each photograph is supplemented with geo-tagging information – a precise recording of its exact longitude, latitude and compass bearing, allowing each image to be re-connected to both contemporary, and the original Green Line maps.

By Lihee Avidan — Linda (8) and Hassan (5) live in a dilapidated council flat in South London with their mum, Kelley (23). Britain has the highest teenage pregnancy..
Apr 8, 2016