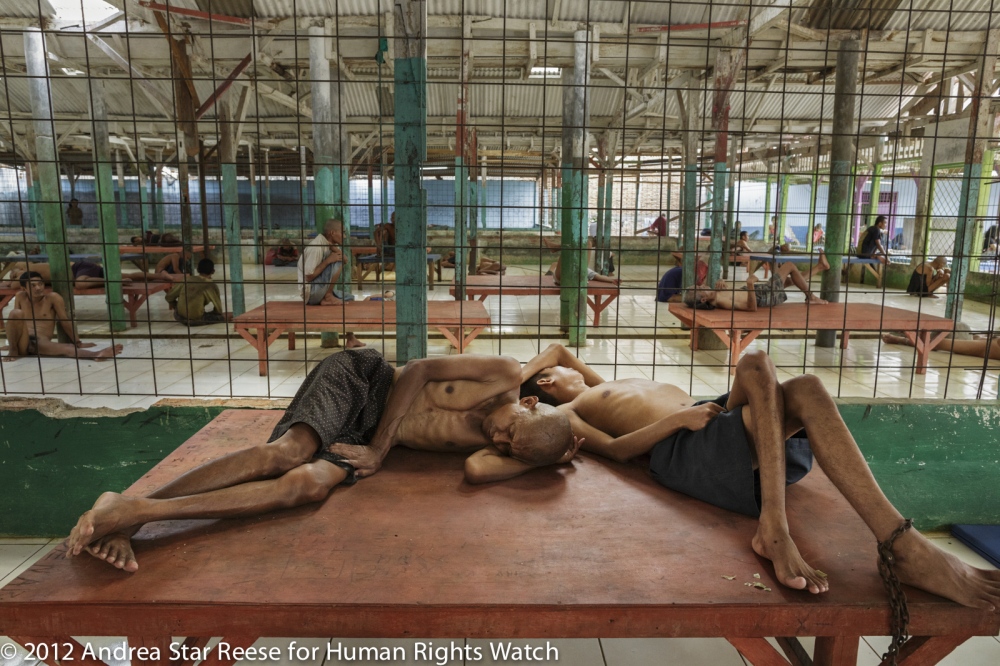 1 of 18 © 2021 Andrea Star Reese
In 2012 there was no actual housing at Galuh Rehabilitation Center in Bekasi. Many of the residents were confined in a large cage enclosed pavilion without sanitation facilities, men and woman living separated by a wire wall. Some of them had been there for as long as nine years. 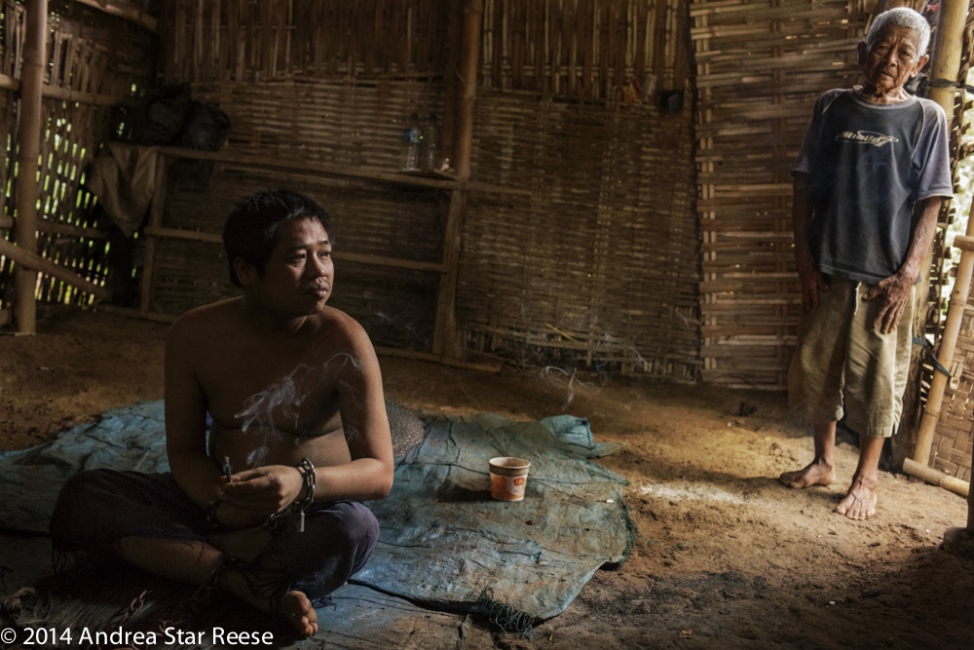 2 of 18 © 2021 Andrea Star Reese
A father watches his son who lives in "pasung" in a shed beside the family home in East Java, Indonesia. He does not know how to help him. Pasung is the Indonesian term for shackling. It can also refer to being kept in chains, stocks or locked in a room, cell, or pen. Banned in 1977, it is a widespread traditional response to psychosocial disabilities throughout Indonesia. 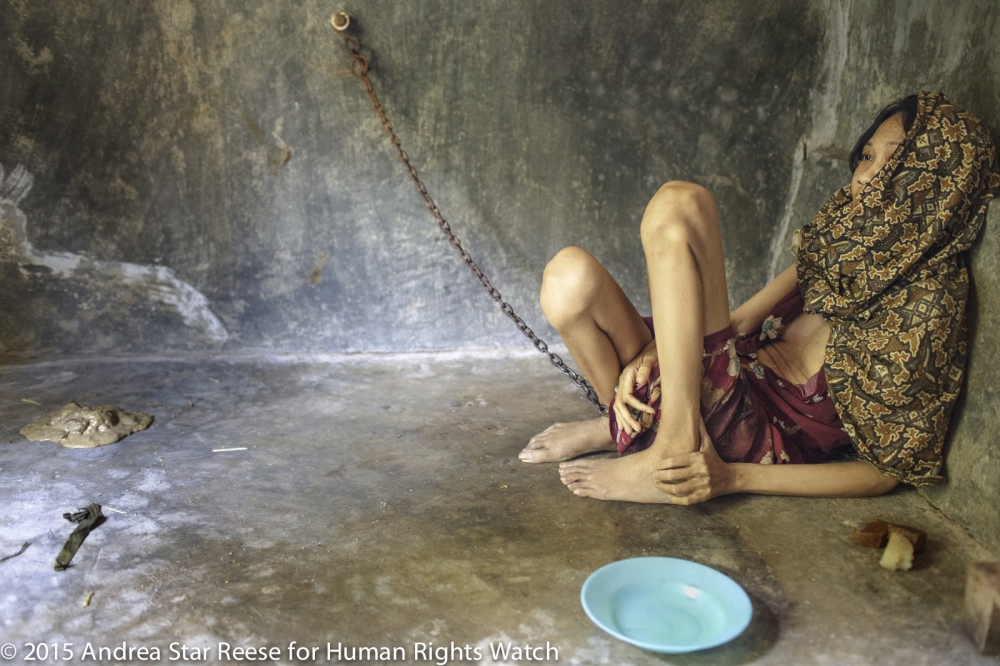 3 of 18 © 2021 Andrea Star Reese
A woman lives shut in a room built behind her family home in Ponorogo, East Java. She is forced to eat, sleep, and defecate in this room. Other then one month spent at a hospital she has been in pasung since 2003. 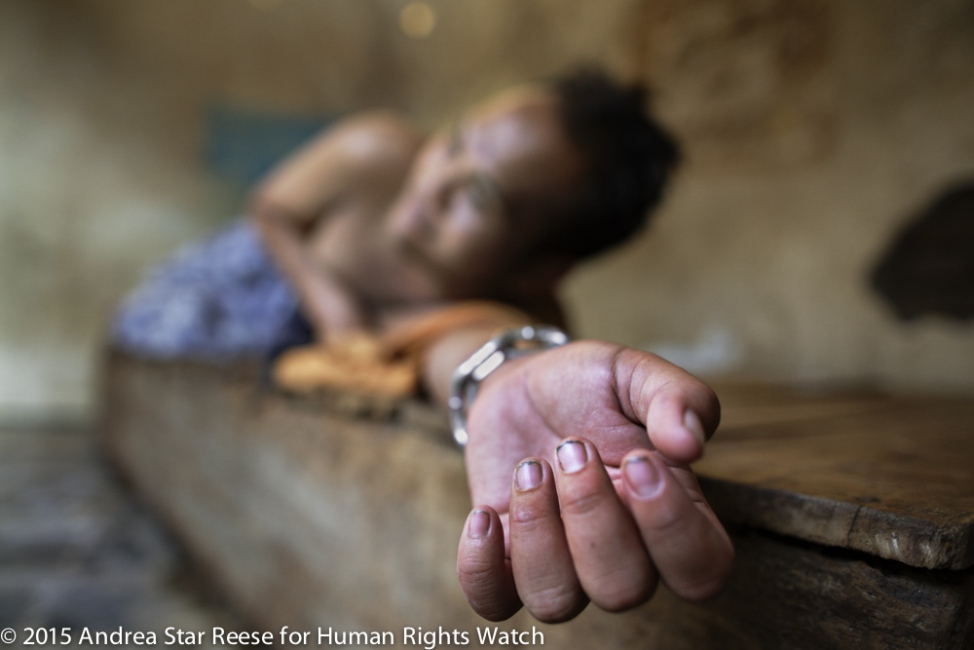 4 of 18 © 2021 Andrea Star Reese
This man's chain is so short that it is affecting the circulation in his hand, and he is unable to move around. 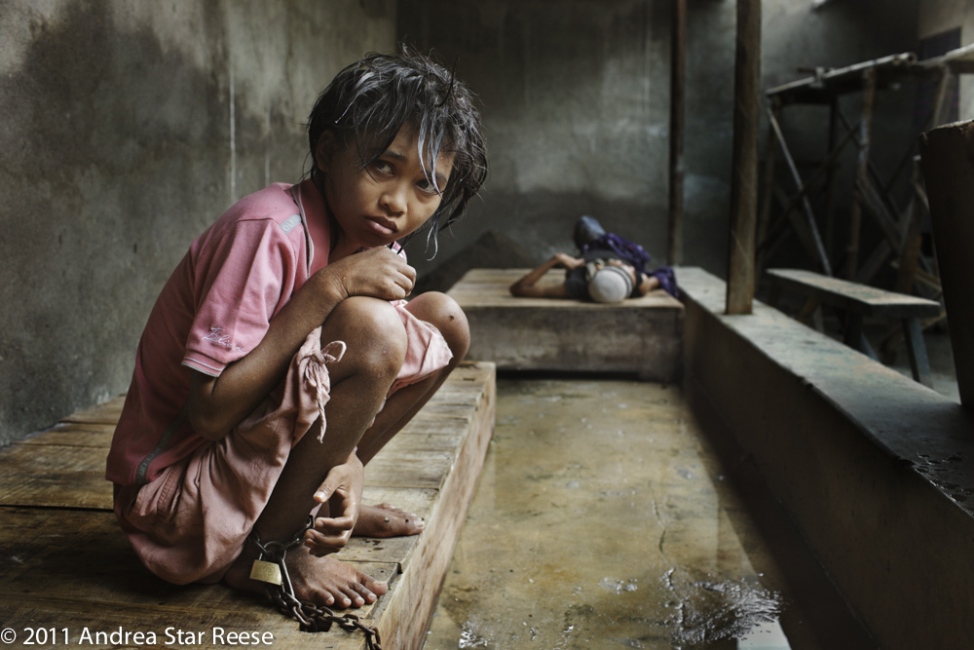 5 of 18 © 2021 Andrea Star Reese
Before she died, Evi lived chained at Bina Lestari healing center in Brebes, Central Java for over two years. Her family paid for the platform bed and the Islamic based healing she received at the center. Evi's favorite color was pink. 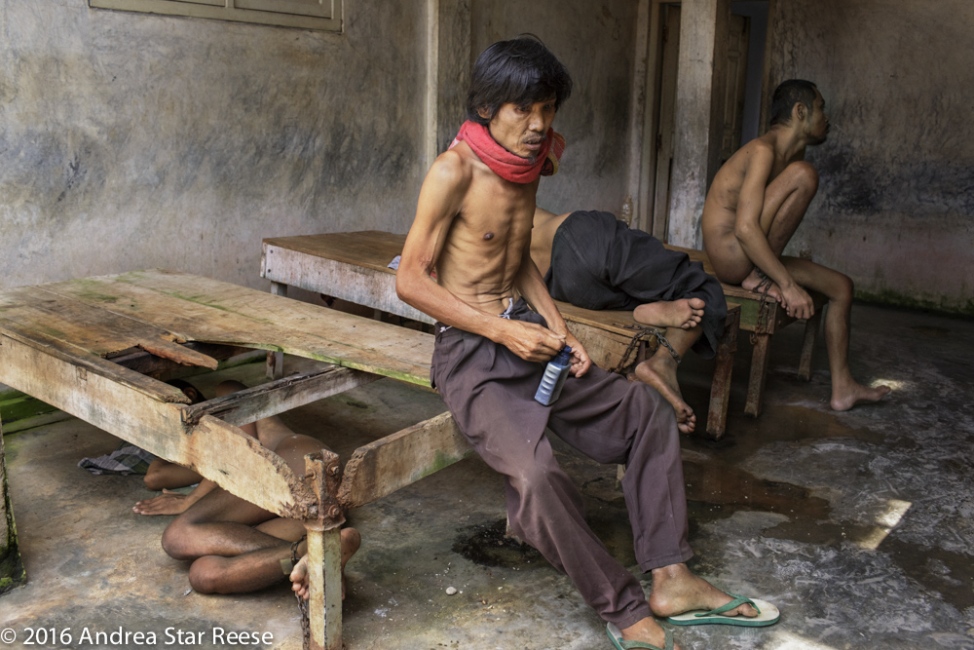 6 of 18 © 2021 Andrea Star Reese
Residents of Syamsul Ma'arif family shelter in Brebes, Central Java are chained to platform beds that are falling apart. The shelter situated behind the Ma 'arif residence is plagued by rats. 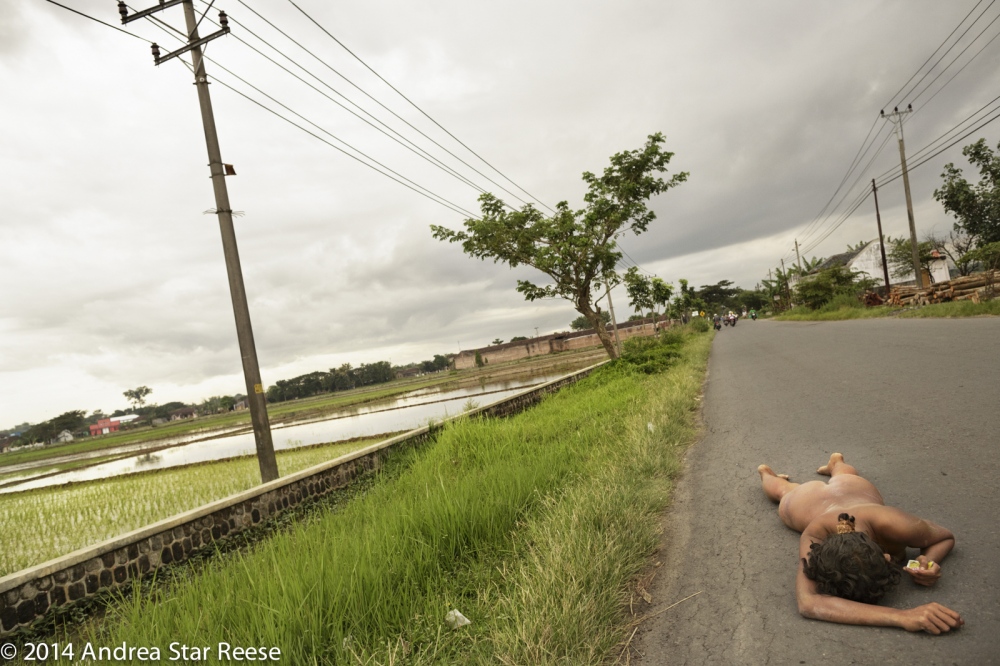 7 of 18 © 2021 Andrea Star Reese
A woman lies on a road distraught and confused near Klaten, Central Java. Just before this moment a man living nearby threw a rock at her to discourage her from staying in the area. The woman does not know where she is or how to find her home. Homeless men and women with psychosocial disabilities are common in Indonesia, and are at high risk for assault, malnutrition and rape. 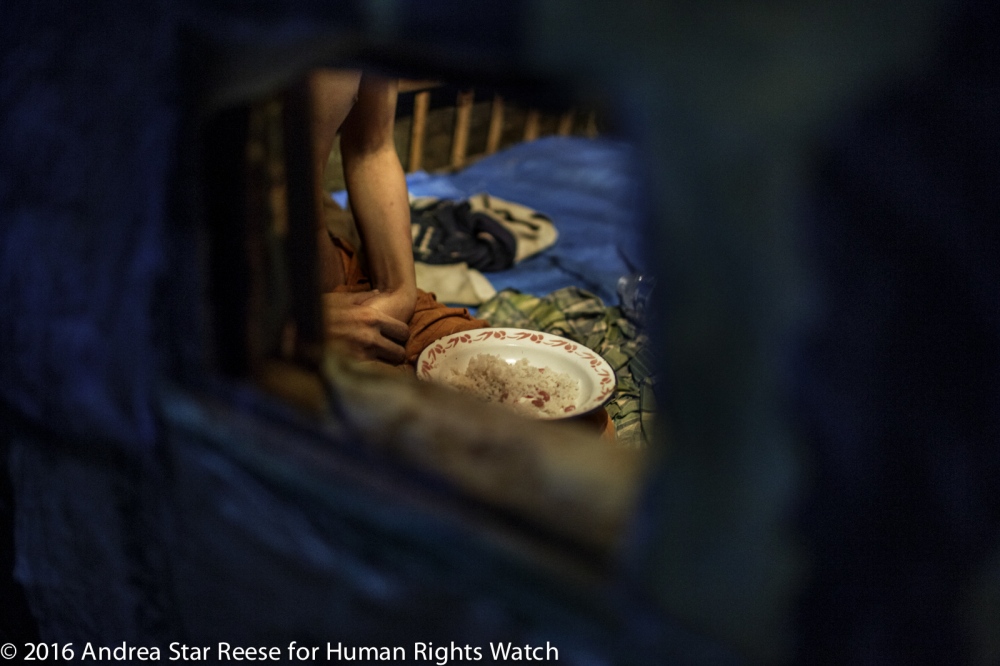 8 of 18 © 2021 Andrea Star Reese
Ekram, a man with a psychosocial disability, eats his dinner in a shed outside the family home where he has been locked up. His family gives him food and water through a small hole in the shed. 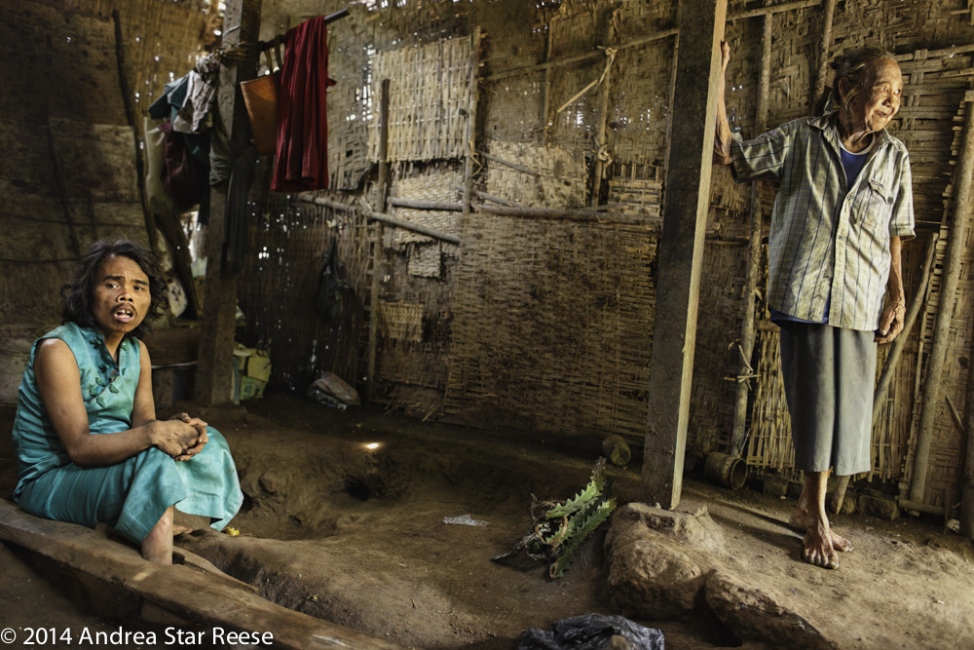 9 of 18 © 2021 Andrea Star Reese
Saimun, 40 years old cannot speak. He has been living with his leg restrained by a wooden stock for six years. He has a brother who is mentally impaired as well. His mother must care for them alone. They are dependant ofn the good will of neighbors for their food and necessities. 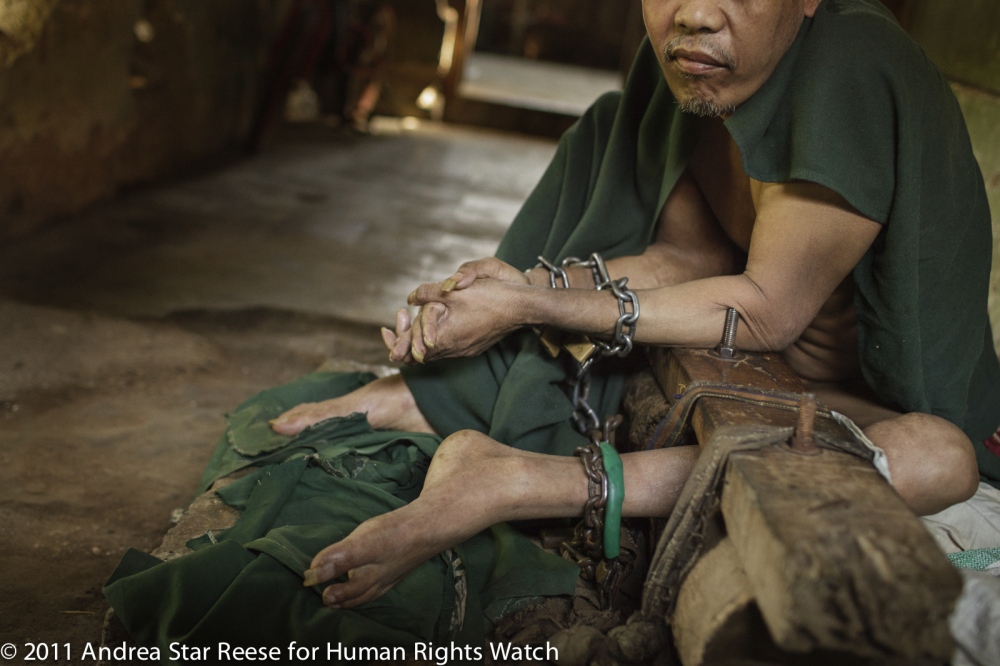 10 of 18 © 2021 Andrea Star Reese
Saepudin lived shackled in stocks, (a traditional form of pasung), for nine years in a back room in his family’s home in Cianjur in West Java. When he was released, his legs had atrophied from disuse. 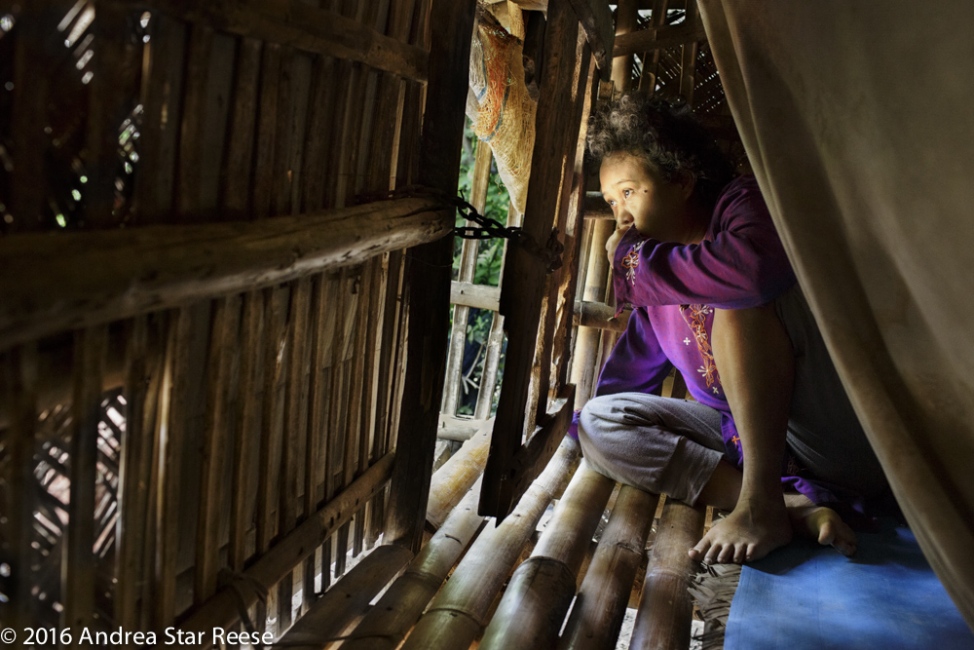 11 of 18 © 2021 Andrea Star Reese
In 2016 Carika was back in pasung after five years of liberty. Carika (name changed) was locked in a goat shed for several years before receiving treatment at a hospital in 2011. A successful recovery allowed her to sell rice and tempeh (soy bean cakes) at a roadside stall and to make friends amongst her community. When her father was unable to refill her medications, subsidized by National Haelth Insurance, Carika worsened. The nearby clinic did not have the medication and the hospital was far away. Furthermore local doctors were having difficulity obtaining insuance reimbursement and were charging additional fees. When Carika's condition deteriorated she attacked family members and disapeared lost for days. Her father locked her in the goat shed again saying it was temporary. Carika knew she could be better if she had the medications she needed. Without them she was unable to manage her moods and was troubled by confusion and hallucinations. 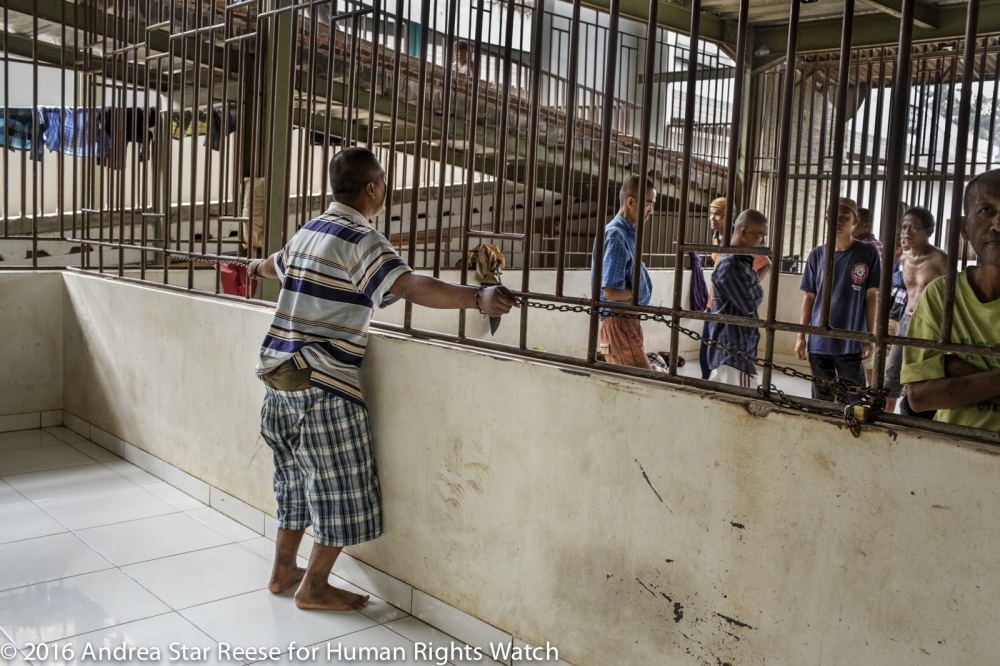 12 of 18 © 2021 Andrea Star Reese
A man is restrained by chains in the mens section of Galuh Rehabilitation center. By January, 2016 , the shelter had largely completed the construction of a single building residence paid for by private funding. The staff has received training under a model program and some of the men and women are receiving medications from a visiting psychiatrist. Many of the residents are brought to the center by local police. No one is turned away if they cannot pay. 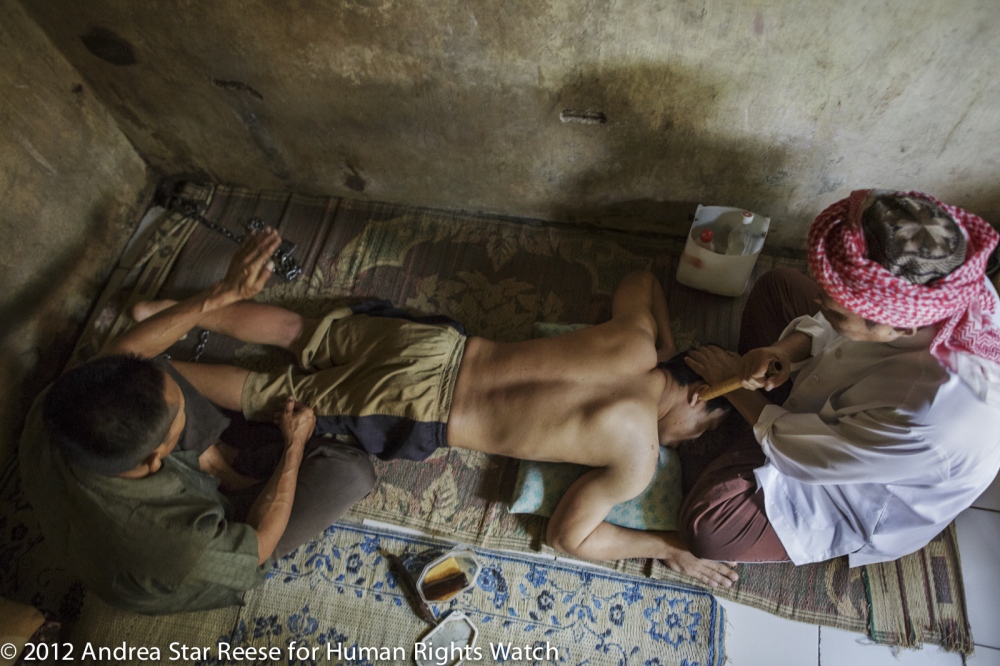 13 of 18 © 2021 Andrea Star Reese
Haji Hamden, an Islamic faith healer, chants as his assistant Abdul slaps the leg of a shelter resident at Pengobatan Alternatif Nurul Azha, a traditional healing center, in Cianjur, West Java. Abdul uses a hard impliment to massage patients, causing extensive brusing as part of the daily routine. The criteria for discharge is arbitrary " When the (body) heat becomes cold, they are ready to leave. When I take them outside to the market or to play football and the person feels cold, it means they are cured." says Haji Hamden. 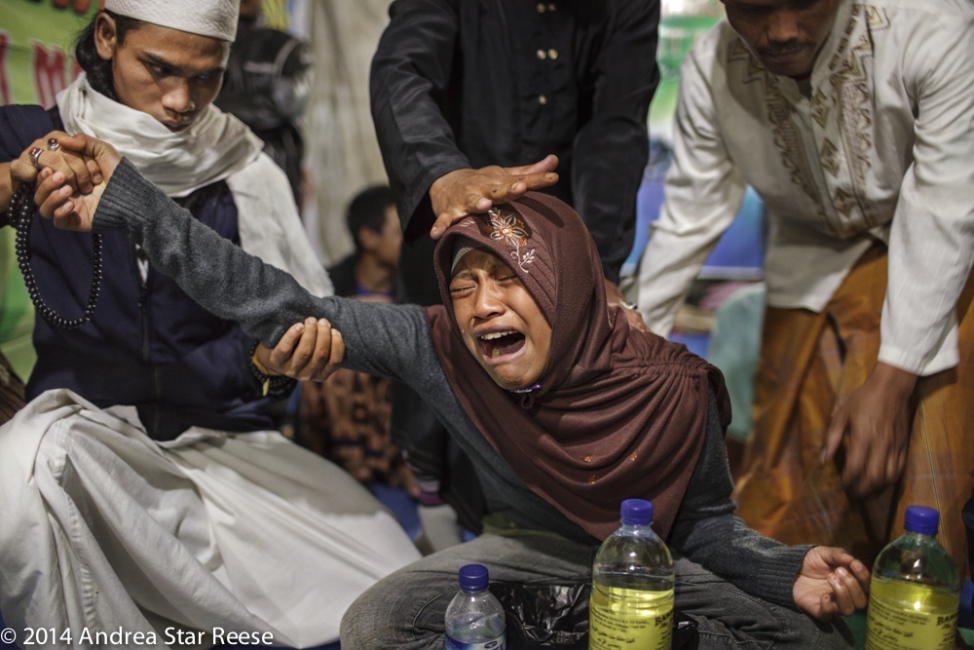 14 of 18 © 2021 Andrea Star Reese
Muhammad Ikromudin, 25 was trained to have special powers. He assists the men and women attending a mass healing that will last throughout the day and night. Participants pray, drink herbal drinks, vomit, and eventually enter a hypnotic trance. Afterwards, cleansed of their sins they are showered with fragrant herbal water._ 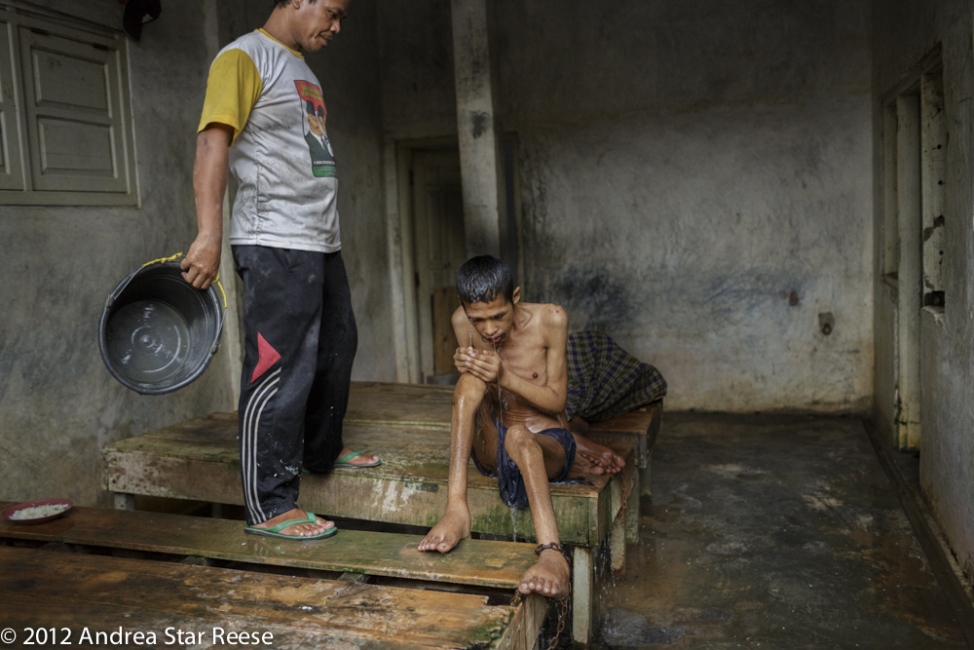 15 of 18 © 2021 Andrea Star Reese
Mustafa, the sole assistant at Syamsul Ma' arif family shelter "gives Akrom a shower". After living at the center for a year his ankles and feet were swelling and his rib cage was visible. One year later in 2013 Akrom died after receiving a shower. 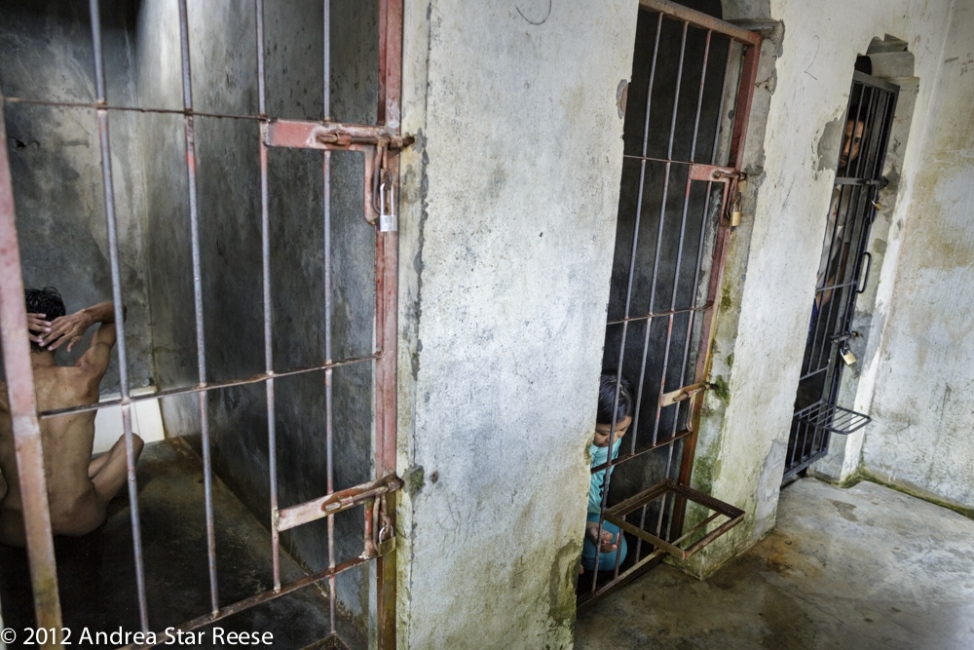 16 of 18 © 2021 Andrea Star Reese
Agus, Liana, and Jarmoko live in individual cages at Pengobatan Alternatif Jasono, in Cinicap, Central Java. Jasono, who learned his healing method from a Pesantren (boarding school) in Jakarta sprays a specially prepared water on the men and women and gives them an herbal drink. 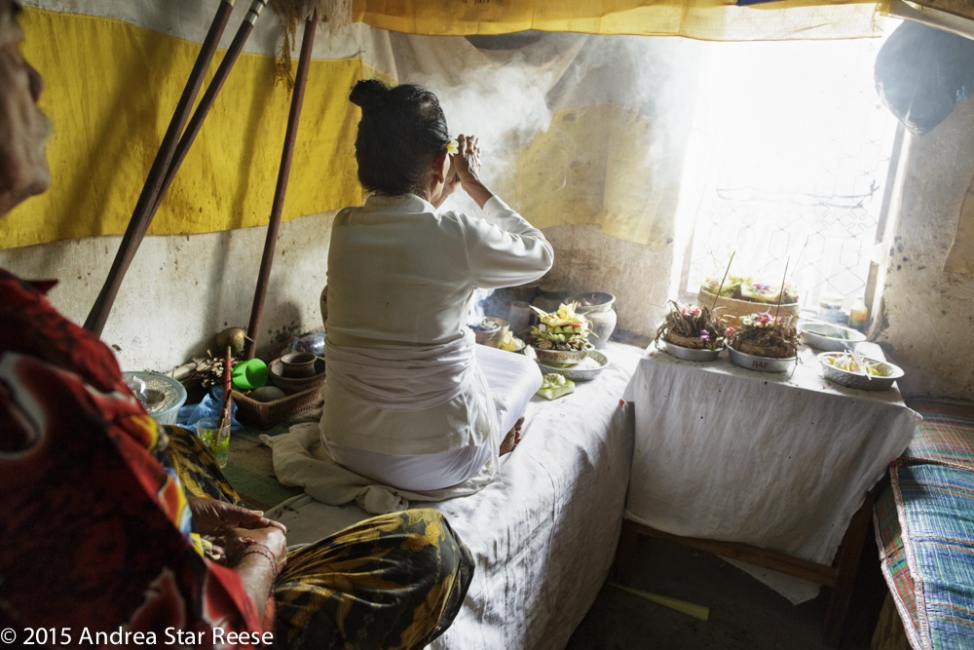 17 of 18 © 2021 Andrea Star Reese
Jero Sedaan Nengah Geri is an 80 years old healer living in a remote area of Bali. Some visitors have traveled for several hours to seek help for a depressed family member. After years consulting a doctor and the island's more common Balians without success, the family is hoping that Nengah Geri can help.. A Sedaan is a higher level of healer. 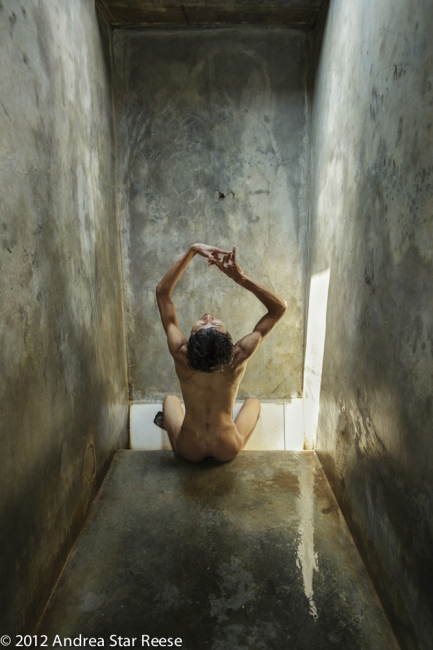 18 of 18 © 2021 Andrea Star Reese
Agus sings in his cage, his hands moving in an intricate dance at Pengobatan Alternatif Jasono. His feet are in a gutter filled with water that he uses when he is thirsty.
Public Story
Disorder
Credits: andrea star reese
Updated: 06/16/16
Archived as:  @AndreaStarReese, Mental Illness, photojournalism

Disorder is documentary photo reportage about abuse against people with psychosocial disabilities in Indonesia:

Pasung is the Indonesian term for chains, stocks, or shackles, but can also refer to being locked in a room, pen or cage.

Banned in 1977, it is the widespread traditional response to mental disorders throughout Indonesia and an act of desperation. Caregivers resort to pasung when they cannot afford care, fear medications and addiction, want to avoid the stigma attached to a diagnosis of mental illness or most commonly, feel it is necessary to protect family, community, and the disturbed individual. Indonesia is estimated to have over 19 million people with psychosocial disabilities.

Even with the passage of the 2014 Mental Health Law, effective regional programs continue to be rare and underfunded. Common obstacles for Indonesians include access to care, cost of seeking treatment, and the lack of widespread dissemination of basic information.

Indonesia has about 48 mental health institutions and roughly 700 psychiatrists. More then half of the psychiatric hospitals are in four of the country’s 34 provinces, while eight provinces have no psychiatric hospitals at all. Of Indonesia’s psychiatrists, half are based in Java, and half of them practice in Jakarta. Needed prescriptions can be unavailable for months due to shortages. Patient compliance and lack of family support can also lead to treatment failure. A new development that is being talked about by families, is the suspicion that a multi-billion dollar deficit risk is affecting Government Health Insurance. Doctors have begun to charge patients additional costs that families are unable to pay. Without needed medications, people who have survived pasung are worsen, are locked away and chained. To further complicate efforts for reform the Ministry of Health oversees mental hospitals while shelters for the mentally ill are the responsibility of the Ministry of Social Affairs

And furthermore, Shamans and traditional healers continue to remain the popular choice of mental health care throughout the country. For Indonesian’s, it is better and cheaper to attribute confusing or abnormal behavior to spiritual weakness, spells or possession. There is no stigma attached to being under a spell or possessed.

In 2013 Human Rights Watch contacted me after seeing my photographs which led to an investigation . On March 21, 2016 Human Rights Watch released their Report: LIVING IN HELL. In mid April, “Indonesia’s Minister of Health, Nila Moeloek, committed to providing mental health medications in all 9,500 community health centers (puskesmas) across the country. Achieving this could turn the tide against shackling” wrote Kriti Sharma, an HRW investigator. However, despite the subsequent International response to 2016 HRW Report, actions by Indonesia’s Ministry of Health, and the relentless efforts of Indonesia’s Mental Health professionals and activists, “little has changed” according to Andreas Harsono, Indonesia’s researcher for Human Rights Watch September 9, 2016. Most recently, “The health ministry has taken steps to train staff on mental health and is providing mental health medication in 2,000 puskesmas (community healthcare clinics). They hope to reach all 9,500 by 2019.” Kriti Sharma, Human Rights Watch Investigator.

Inadequate access to the medications and treatments commonly available throughout much of the world has devastating consequences. Many people don’t even know they can get better.

Walking through the door is easy. It is leaving that is hard. This reportage of men and women who are invisible to mainstream society is in response to what has been discovered concerning the complex realities that challenge the men and women in these photographs.