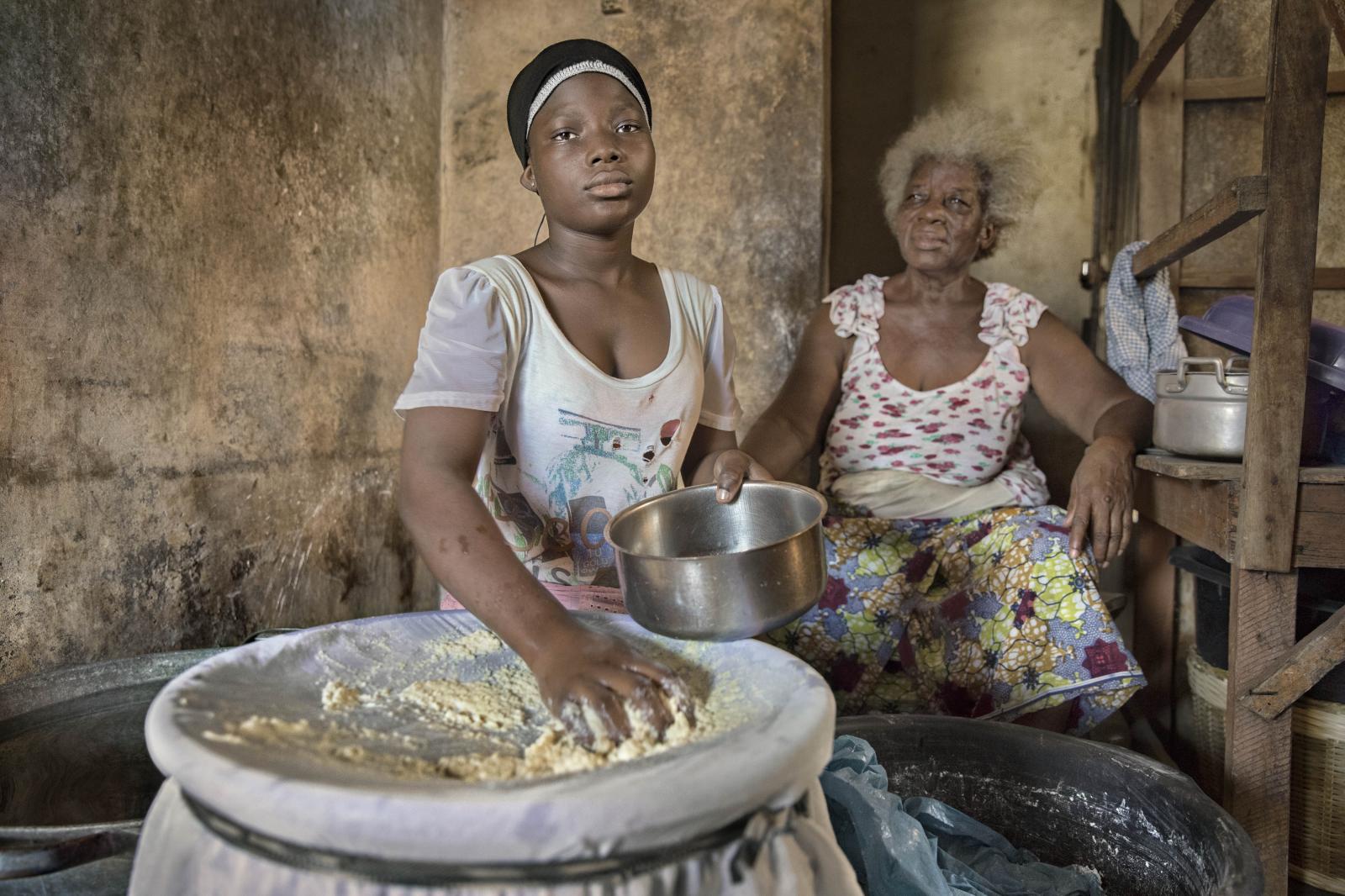 1 of 20 © 2021 Ana Palacios
BLESSING is a girl slave with her “owner” on the background at her work place. She works the whole day for food and a place to sleep at her “owner” place and she is neglected the right to go to school. 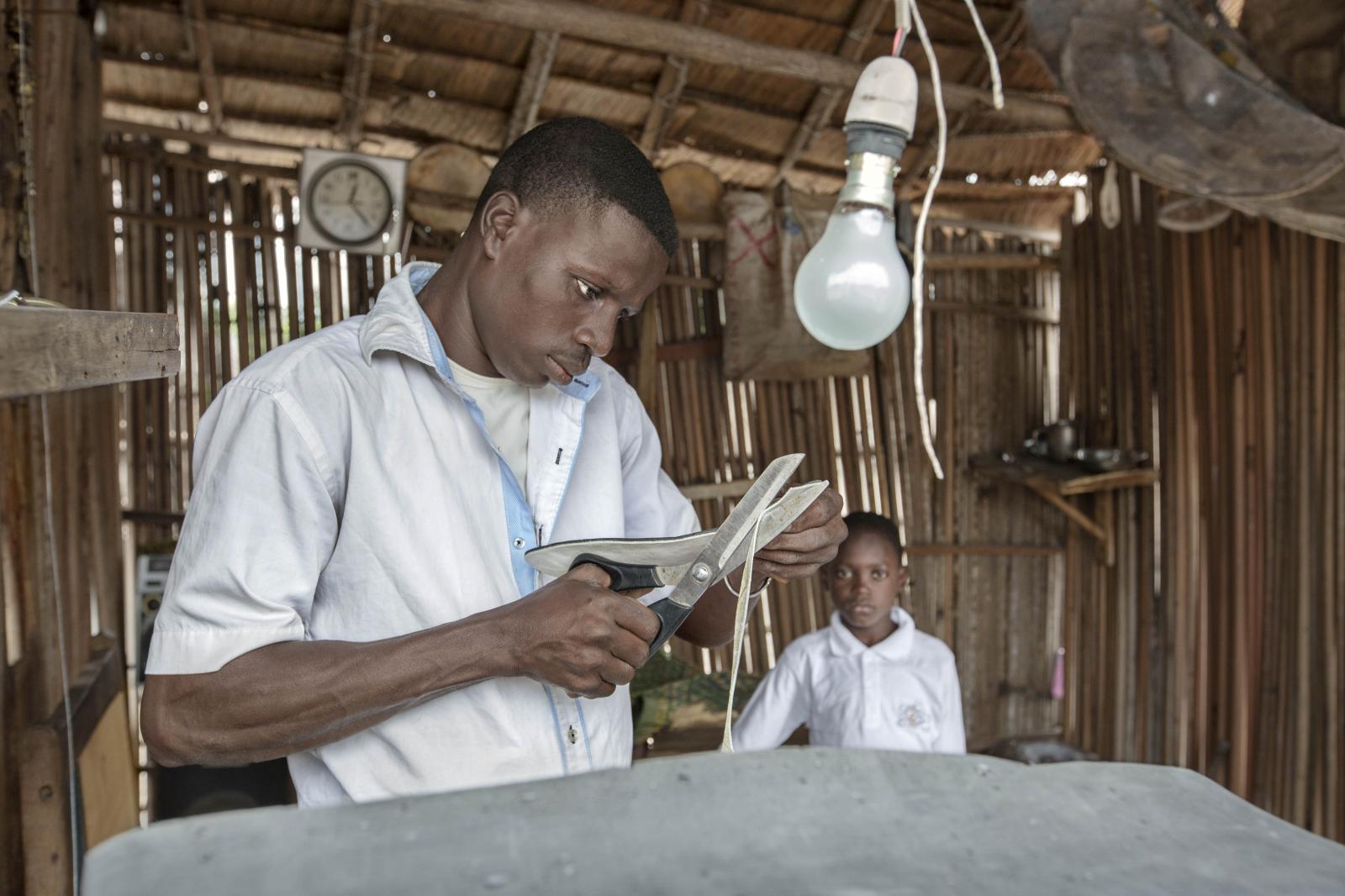 2 of 20 © 2021 Ana Palacios
S. worked for almost a year for this shoe maker. He then became a street kid till an NGO found him and took care of him. He will soon be reintegrated with his grandmother, as her mum has 2 new chindren with a different man than his father and cannot take him because of extreme poverty. 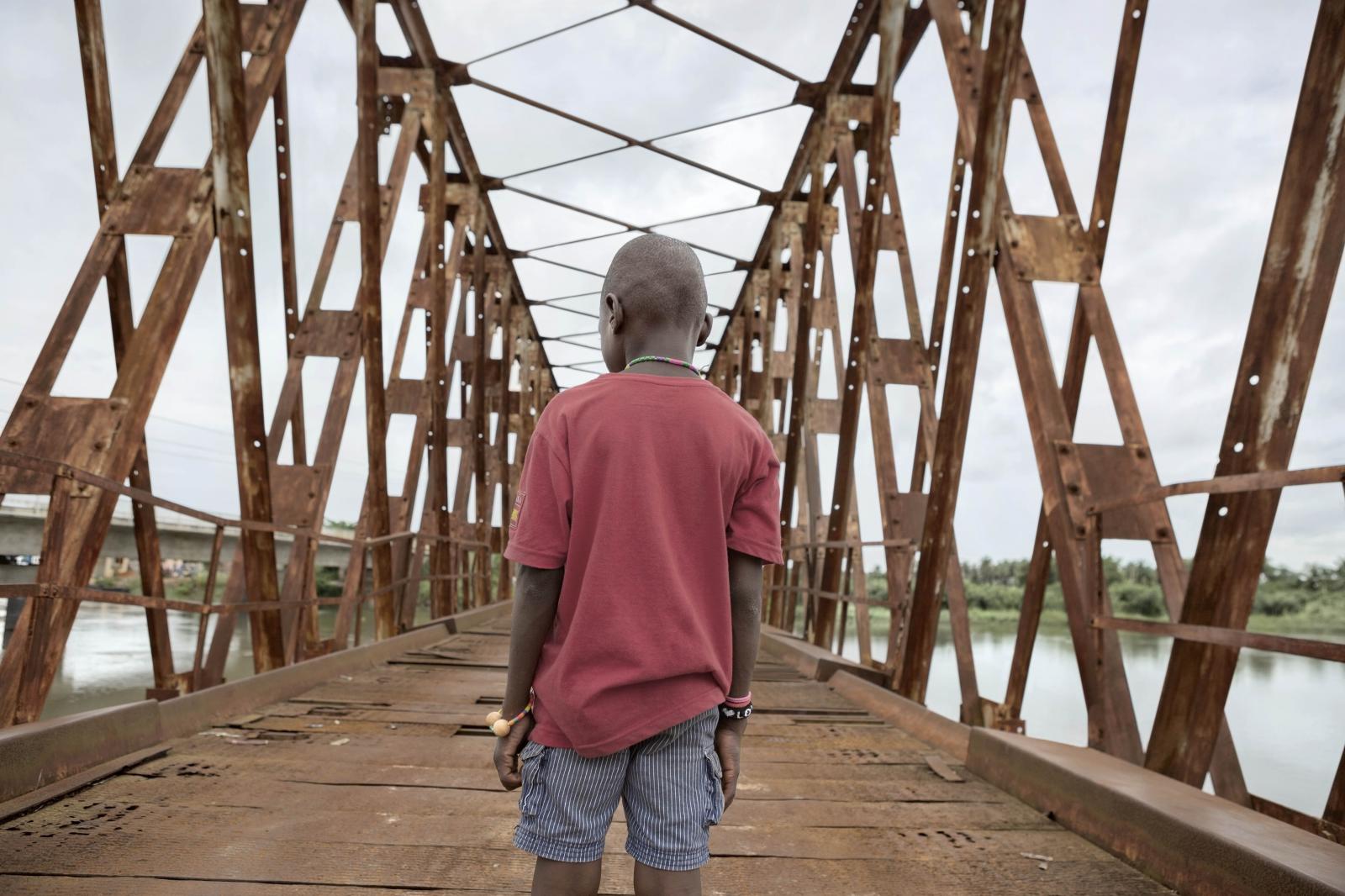 3 of 20 © 2021 Ana Palacios
Usually trafficked children become street kids after they are abandoned or have scaped and wonder for months even years, till police find them and put them in shelters. S. is in a bridge near Grand Popo in Benin. He is now in the proccess of being rehabilitated and reintegrated with a family member after he is totally psicologically and phisically recovered. 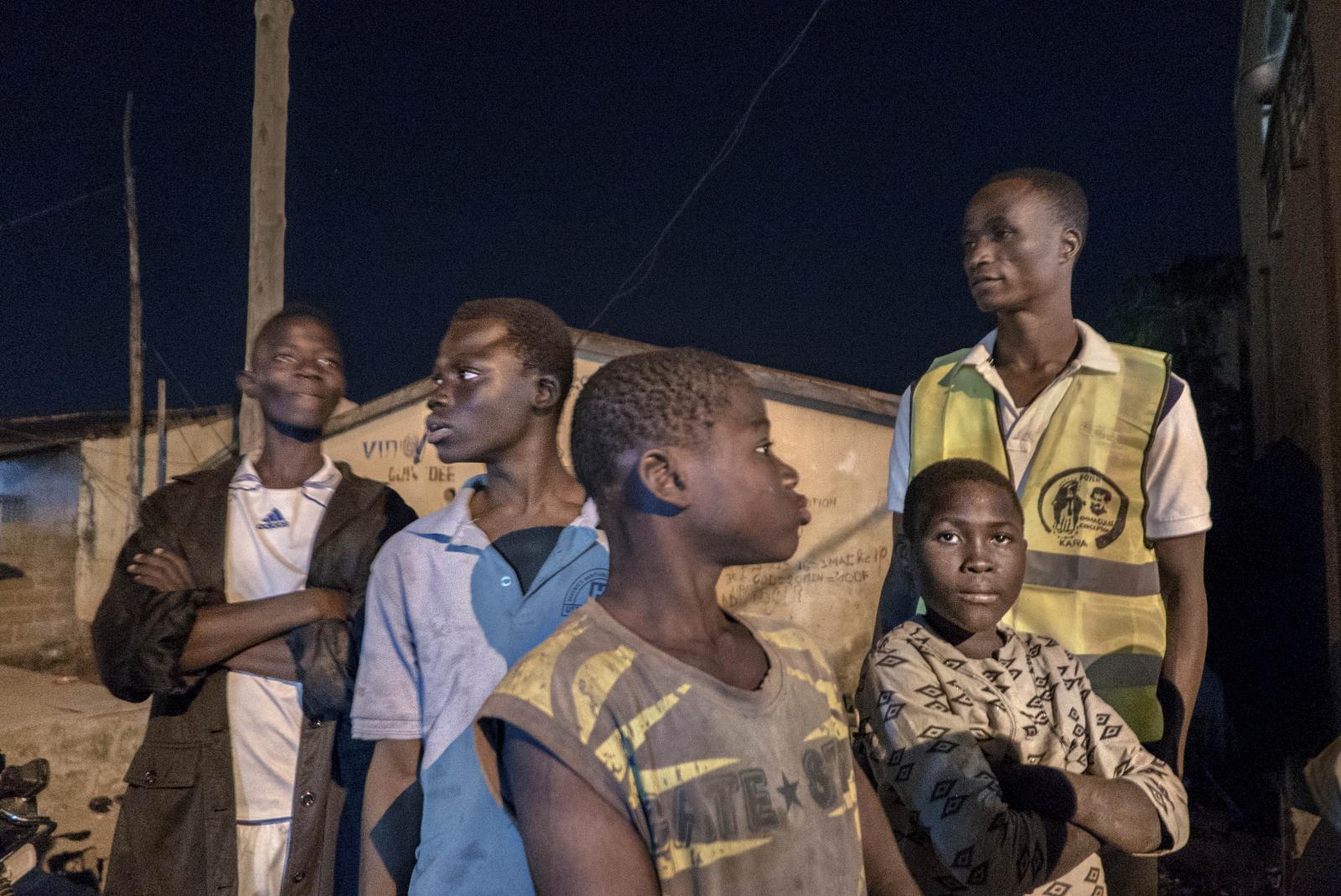 4 of 20 © 2021 Ana Palacios
The social workers of the Salesian Missioners go out at night in Kara searching for street kids, trying to spot them and convince them to leave the streets and go to the shelter to have a better life. 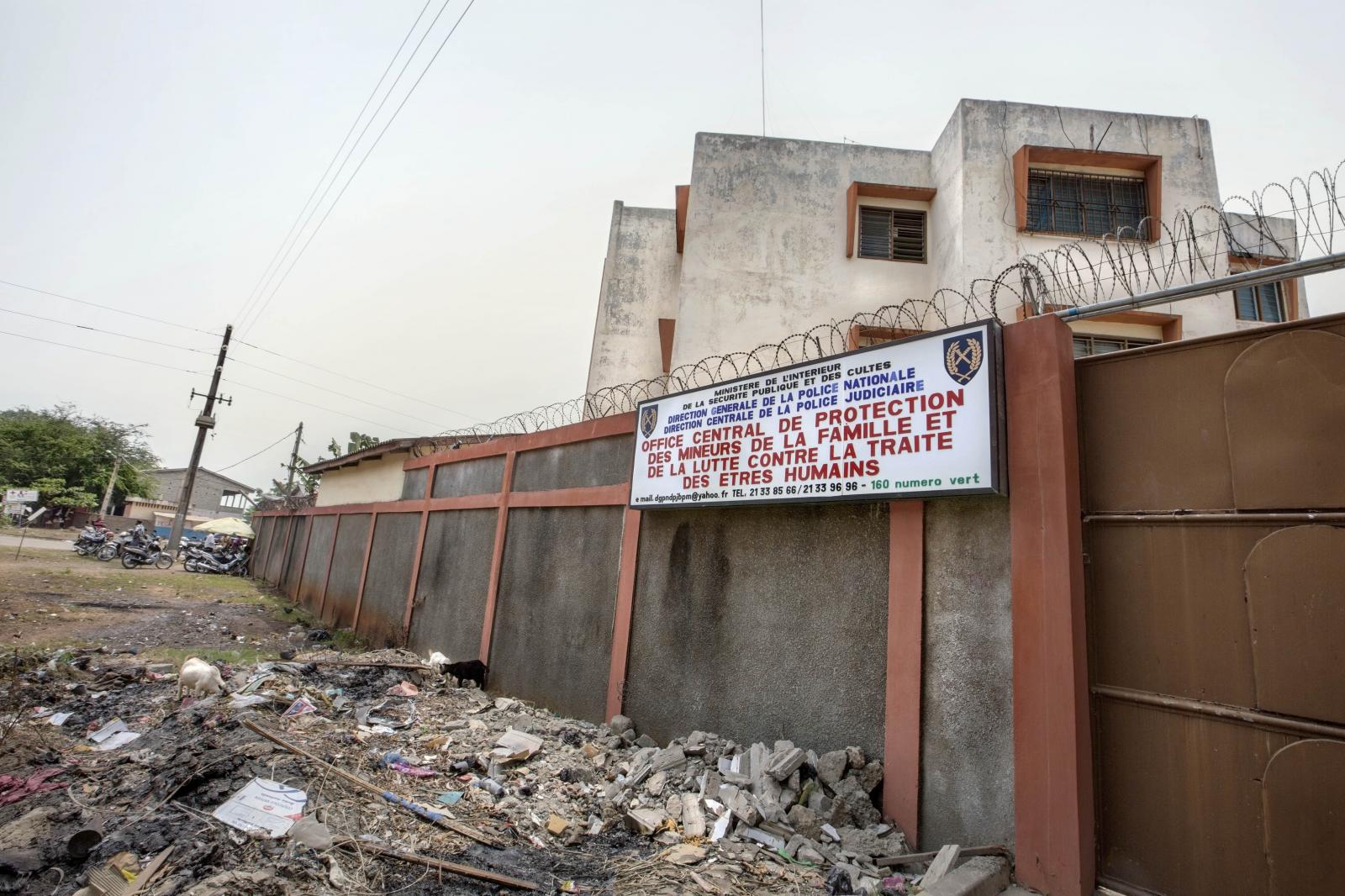 5 of 20 © 2021 Ana Palacios
The problem of human trafficking is so strong in West Africa countries that some of them, like Benin, have specific police and gobbernment headquarters for these particular matters. 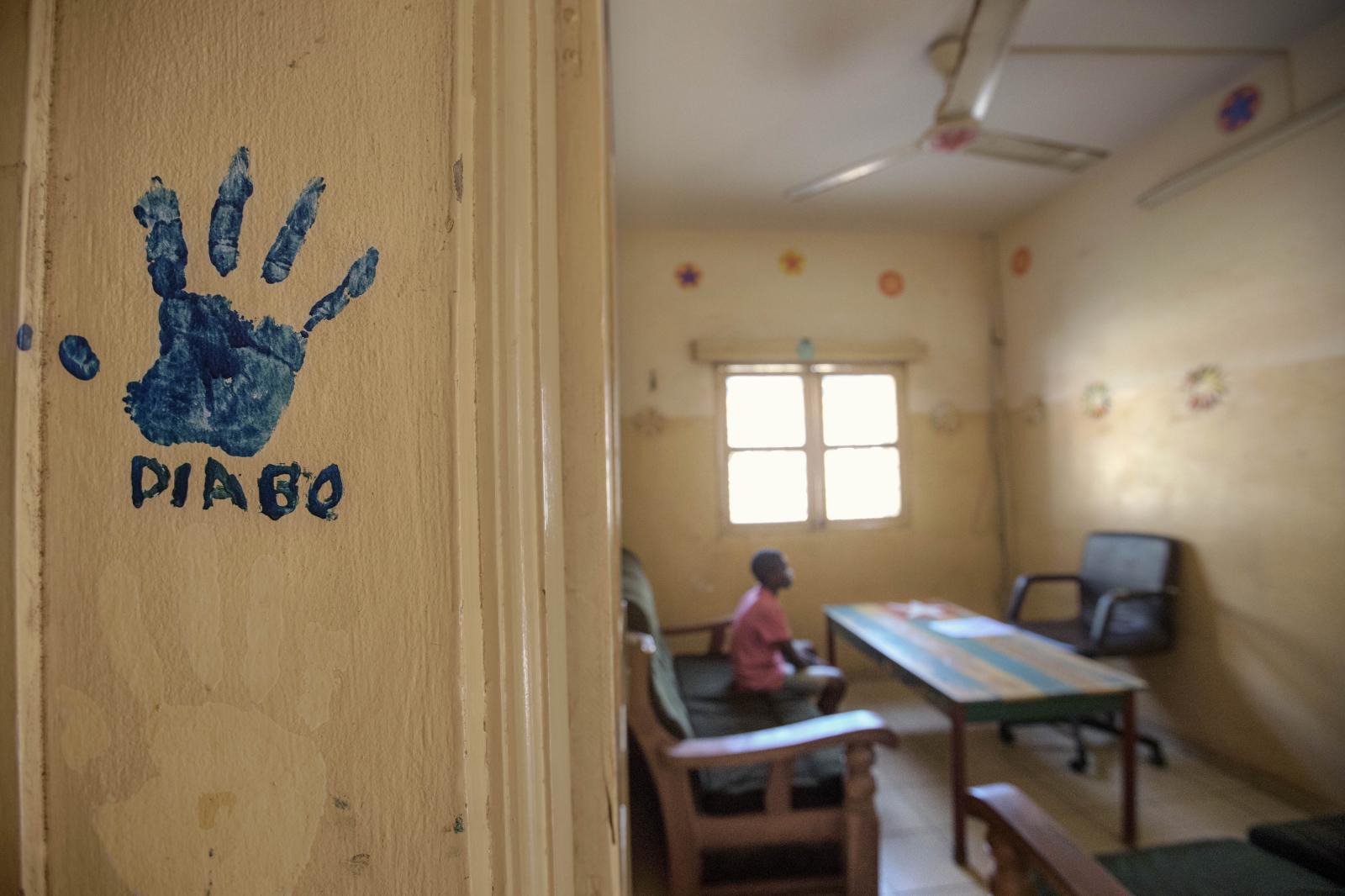 6 of 20 © 2021 Ana Palacios
This is a "hearing room" at the transit center in Lomé. Here kids who are rescued from the streets meet with social workers and psycologists to literally listen to their stories about why they are on the streets. 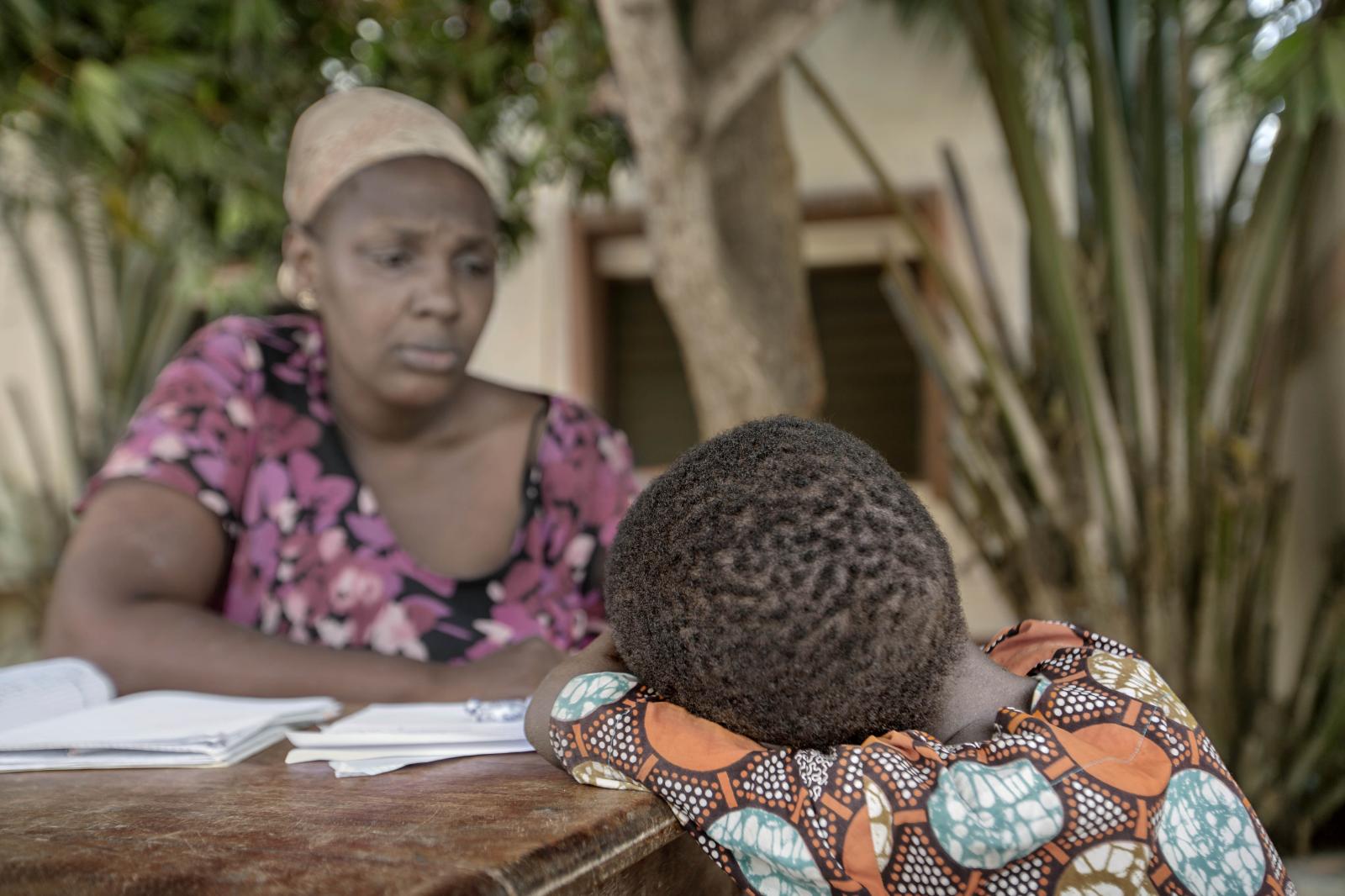 7 of 20 © 2021 Ana Palacios
In this transit center in Cotonou, NGO social workers are allowed to also talk and listen to the children rescued from the streets to identify their problem and their origin to decide if they are elegible to their NGO shelter. Shelters are sometimes specialized in different vulnerable issues like forced marriage girls, victims of human trafficking, victims of abandonment or victims of violence. 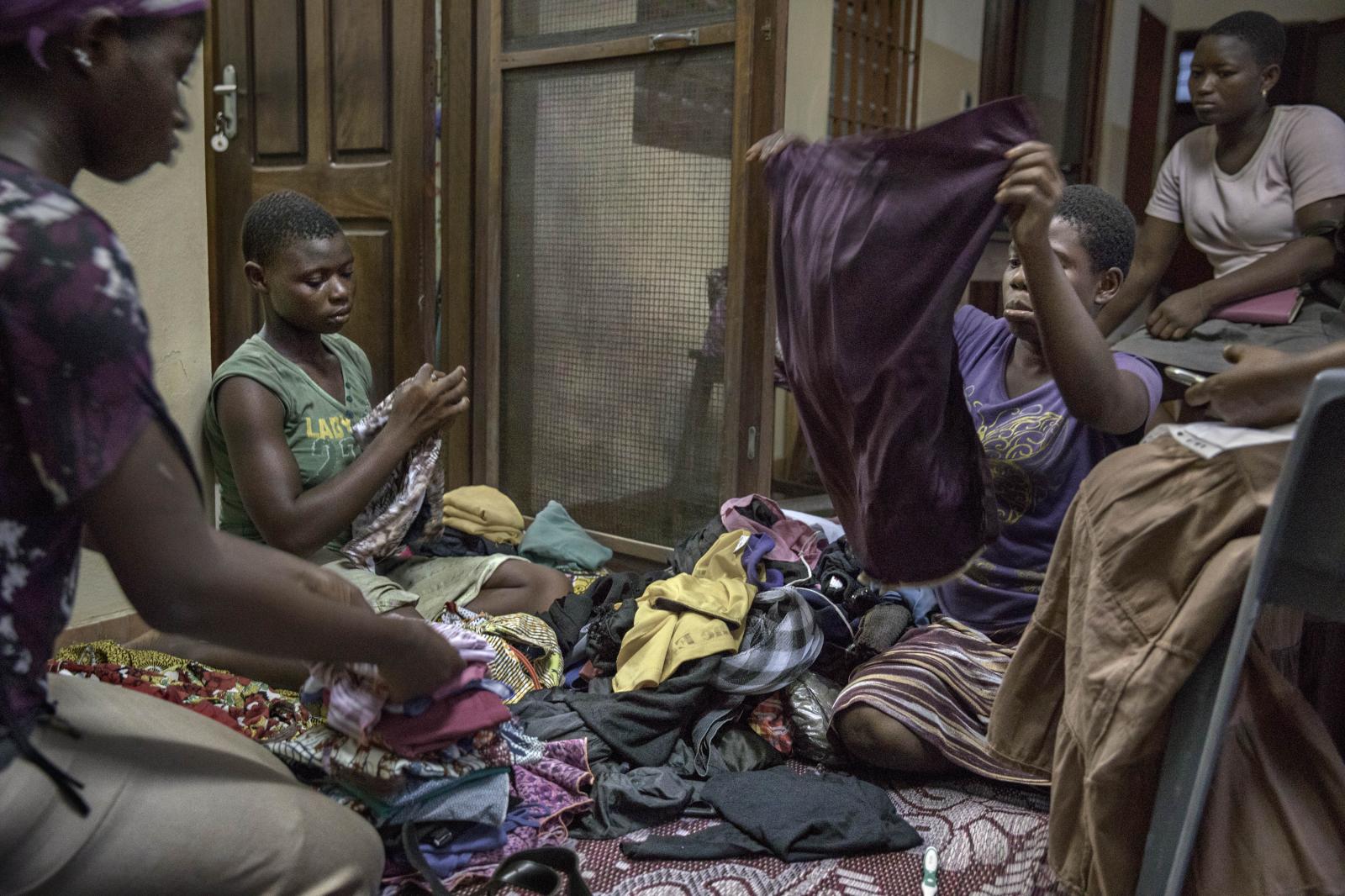 8 of 20 © 2021 Ana Palacios
These girls, V. and C., have just arrived to Kekeli Center. A shelter for girls who have suffered sexual abuse. The police just brought them at night. They were wondering in the streets after scaping from their householders who had them working as domestic. They run away because the man was raping them constantly and, when they both said this to his wife, she beated both of them. 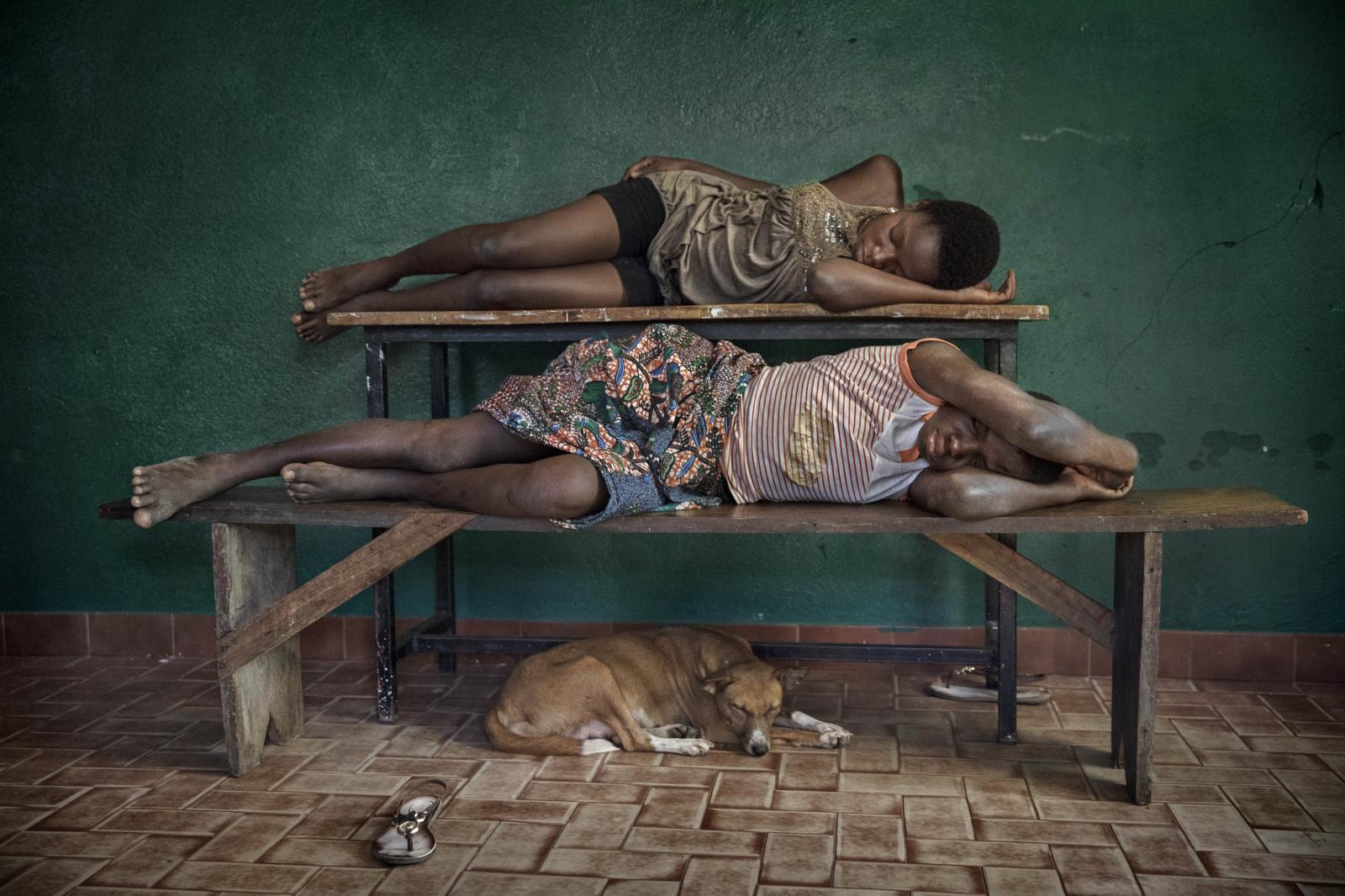 9 of 20 © 2021 Ana Palacios
Le Ciel and L’amour (made-up names they have chosen) can rest at last. Before they came to Jean Paul II, a recovery centre for girl victims of trafficking of people and forced marriages in Kara (Togo), they had to sleep rough, in danger of assault, robbery and sexual abuse. Child protection is one of the basic objectives of these rehabilitation centres. 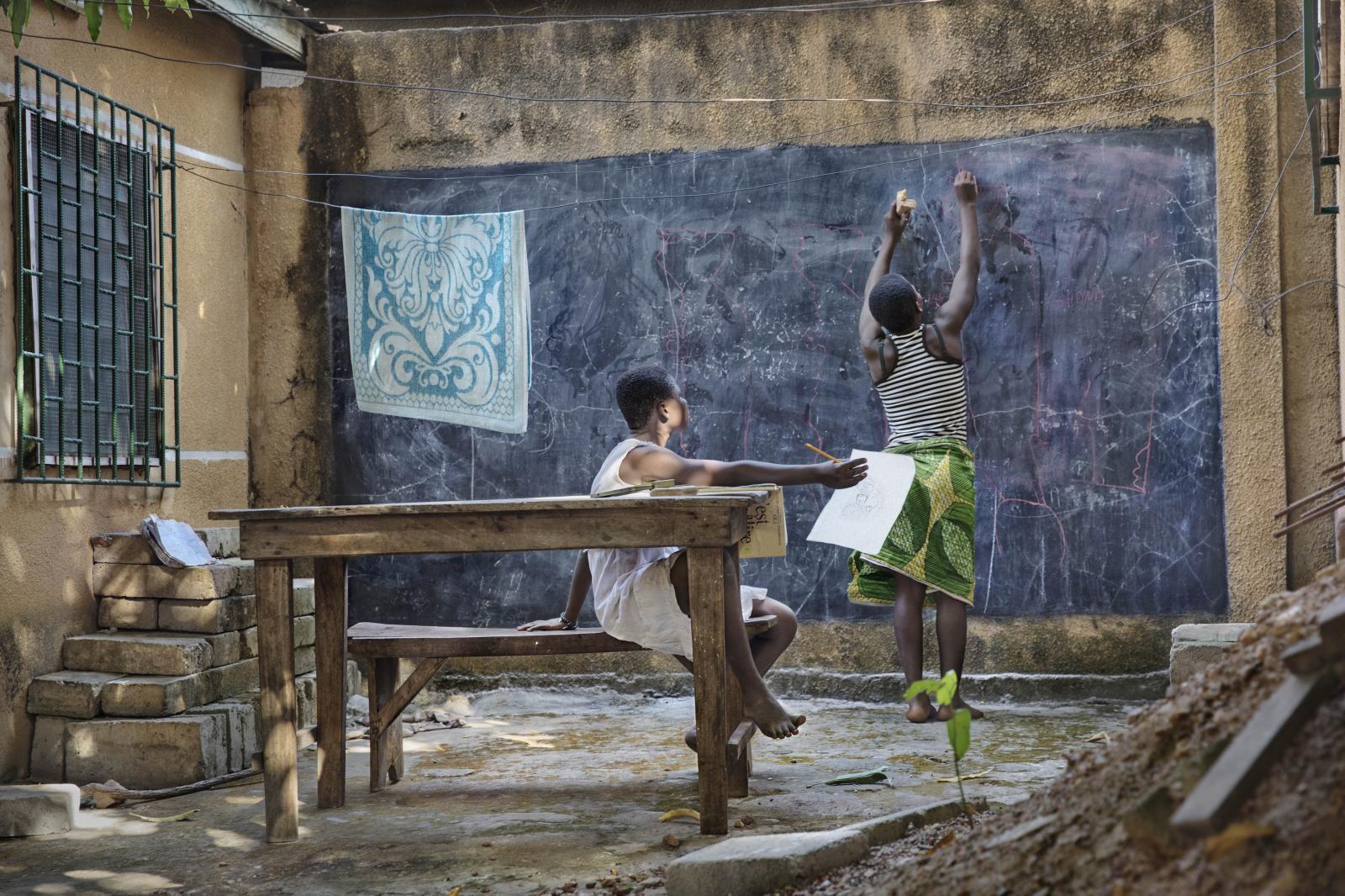 10 of 20 © 2021 Ana Palacios
Girls who stay for long at Jean Paul ll Foyer in Kara, a shelter for victims of traffic and forced marriages, are put into nearby schools while the social workers find their families or a solution for their future. This is the space they use to study after school inside the shelter. 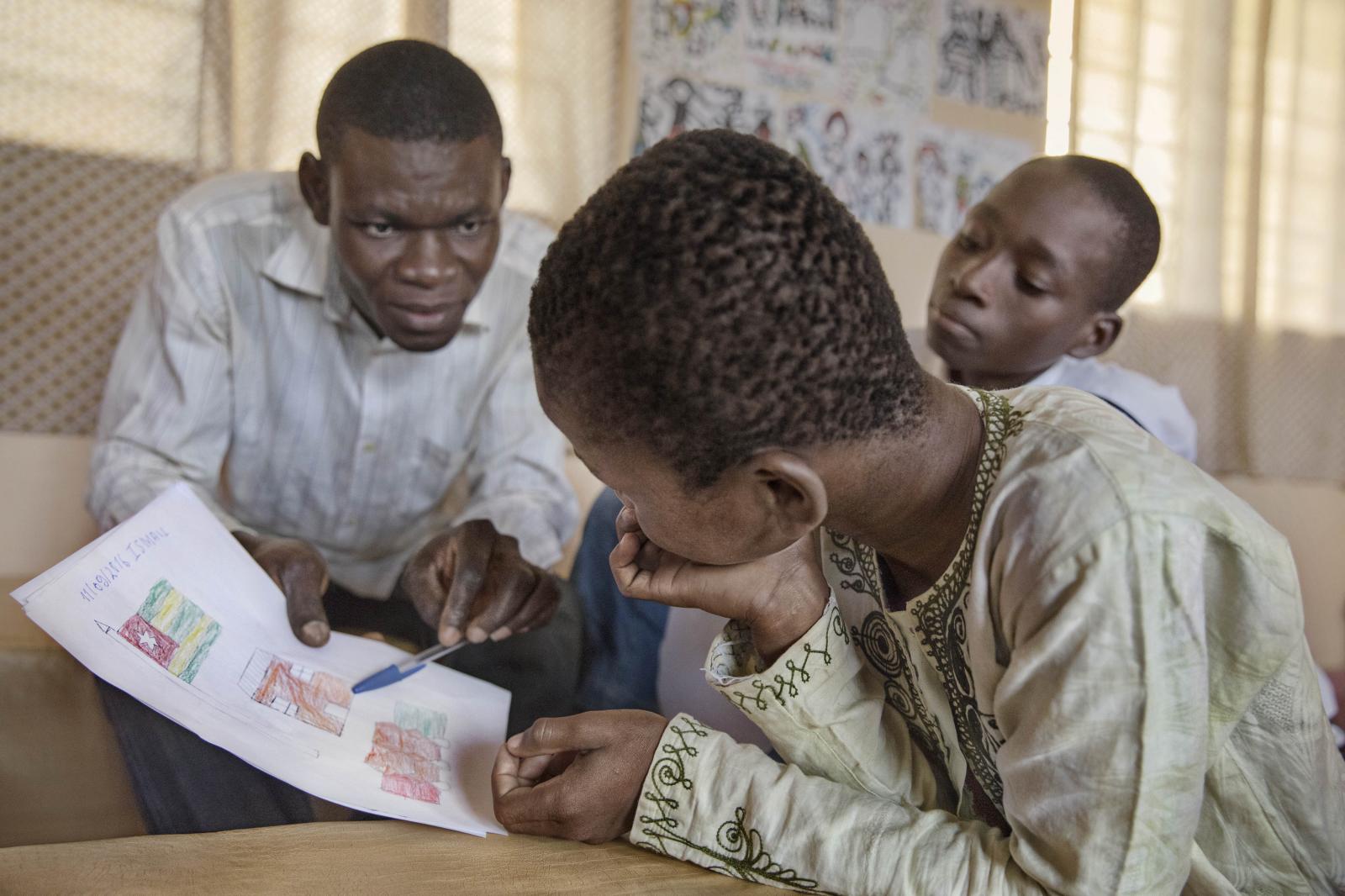 11 of 20 © 2021 Ana Palacios
F. and I. draw their fears under the supervision of Samuel, the psycologist of Inmaculee Foyer in Kara, a shelter for boys victim of human trafficking and abandonment. 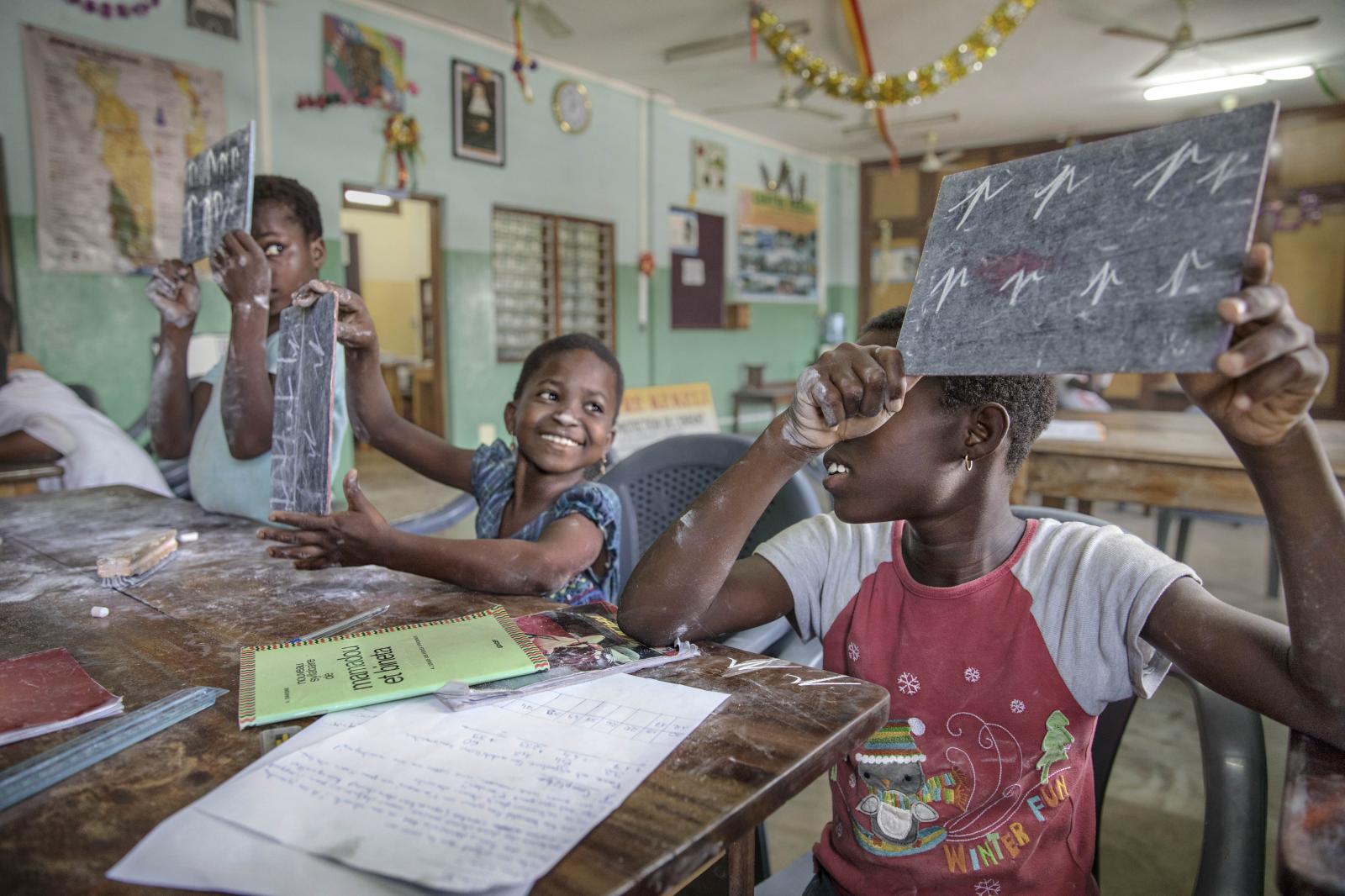 12 of 20 © 2021 Ana Palacios
M., A. and J. are slave girls. Their "owners" have a small shop at the Hanoukoupe market. They work all day but they use their lunch time to go Kekeli Center, to learn how to read and write. 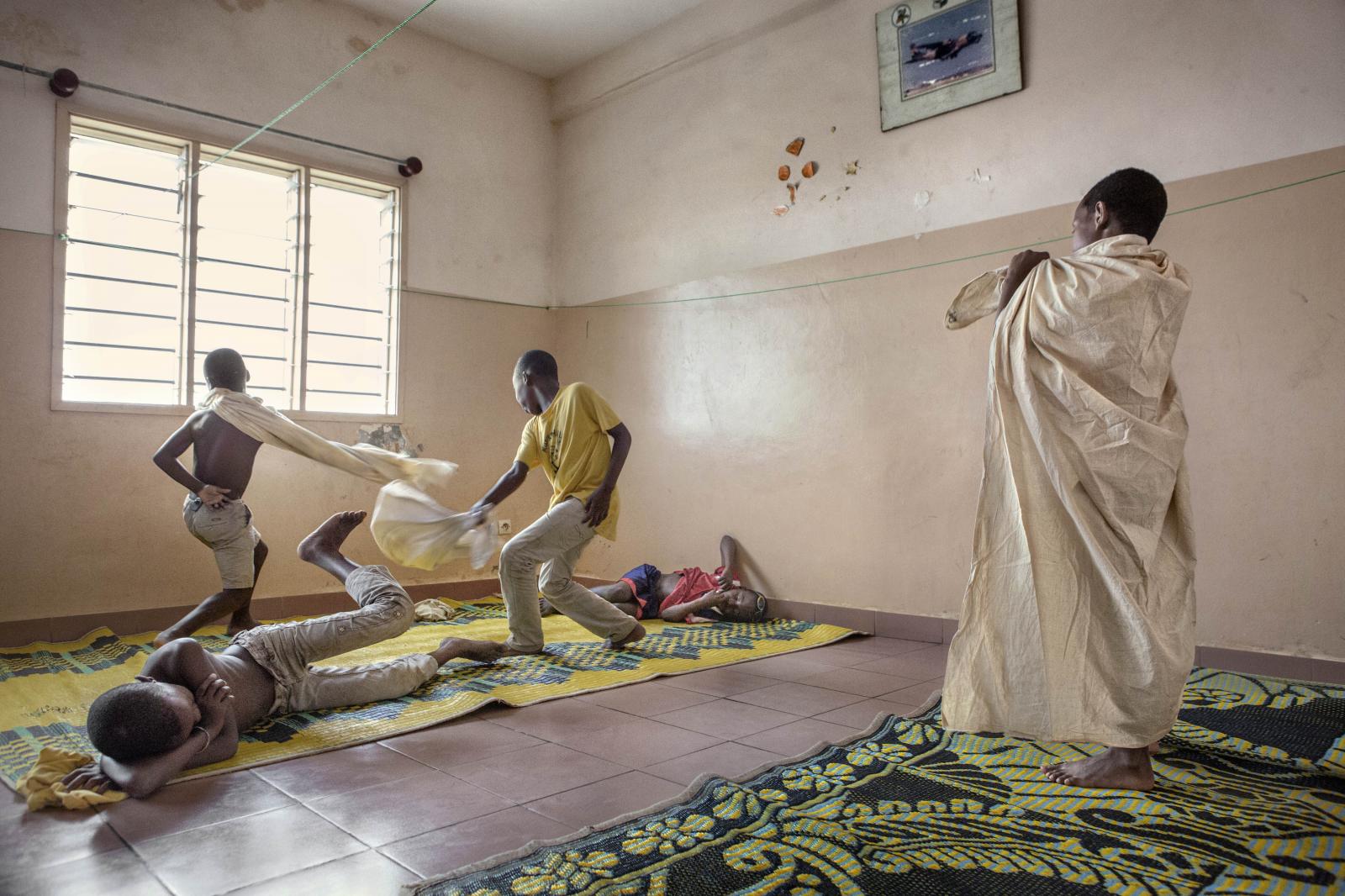 13 of 20 © 2021 Ana Palacios
At Centre de la joie des enfants in Cotonou, a shelter for children with various problems, they take an hour nap after lunch, to rest and recover. Although kids usually take this time to play, specially play super heroes games. 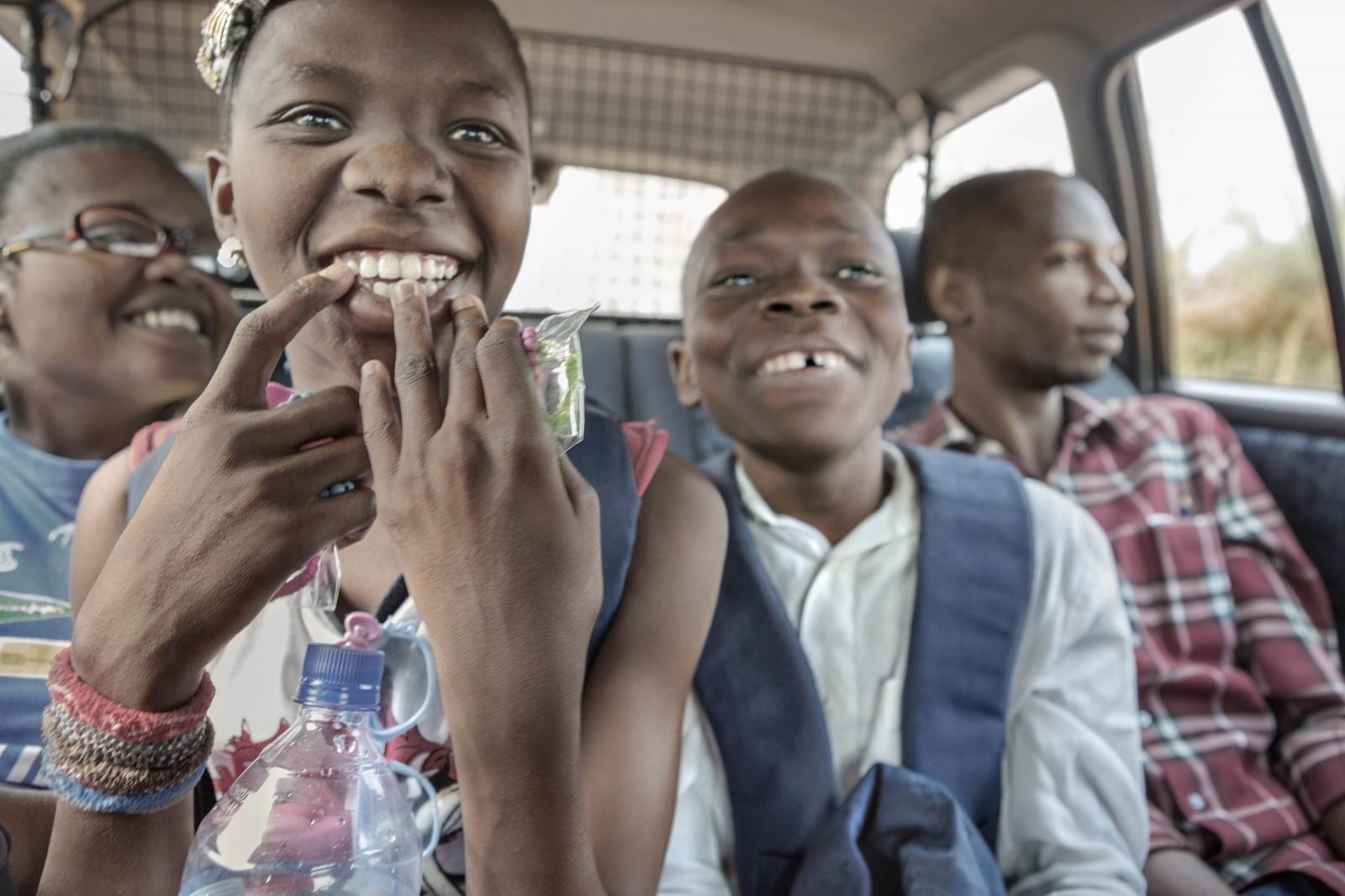 14 of 20 © 2021 Ana Palacios
This is the moment M. and H. see their home village for the first time after having been rescued and rehabilitated from human trafficking in a shelter. She had been working for a year and a half in Nigeria as a domestic and he was working in a shop and escaped after being beaten hard with a metal bar on the head. 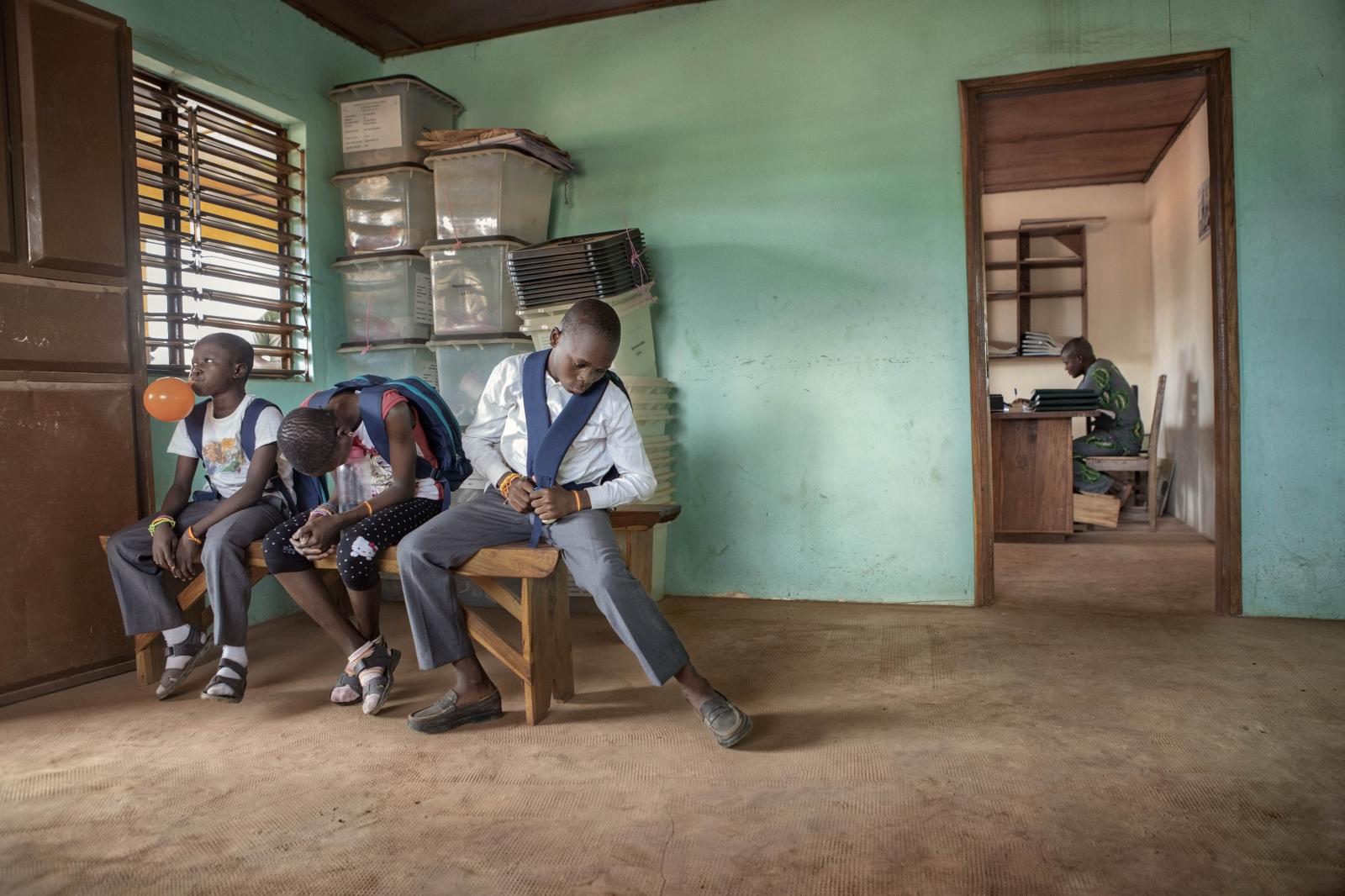 15 of 20 © 2021 Ana Palacios
M. H. and A. are in the Sedje Denou village chieff office, about to be reintegrated with their families in a few hours. They have been a few months at the Centre de la Joie des Enfants, recovering psycologically and phisically, as the three of them had been trafficked, working in Nigeria for years. 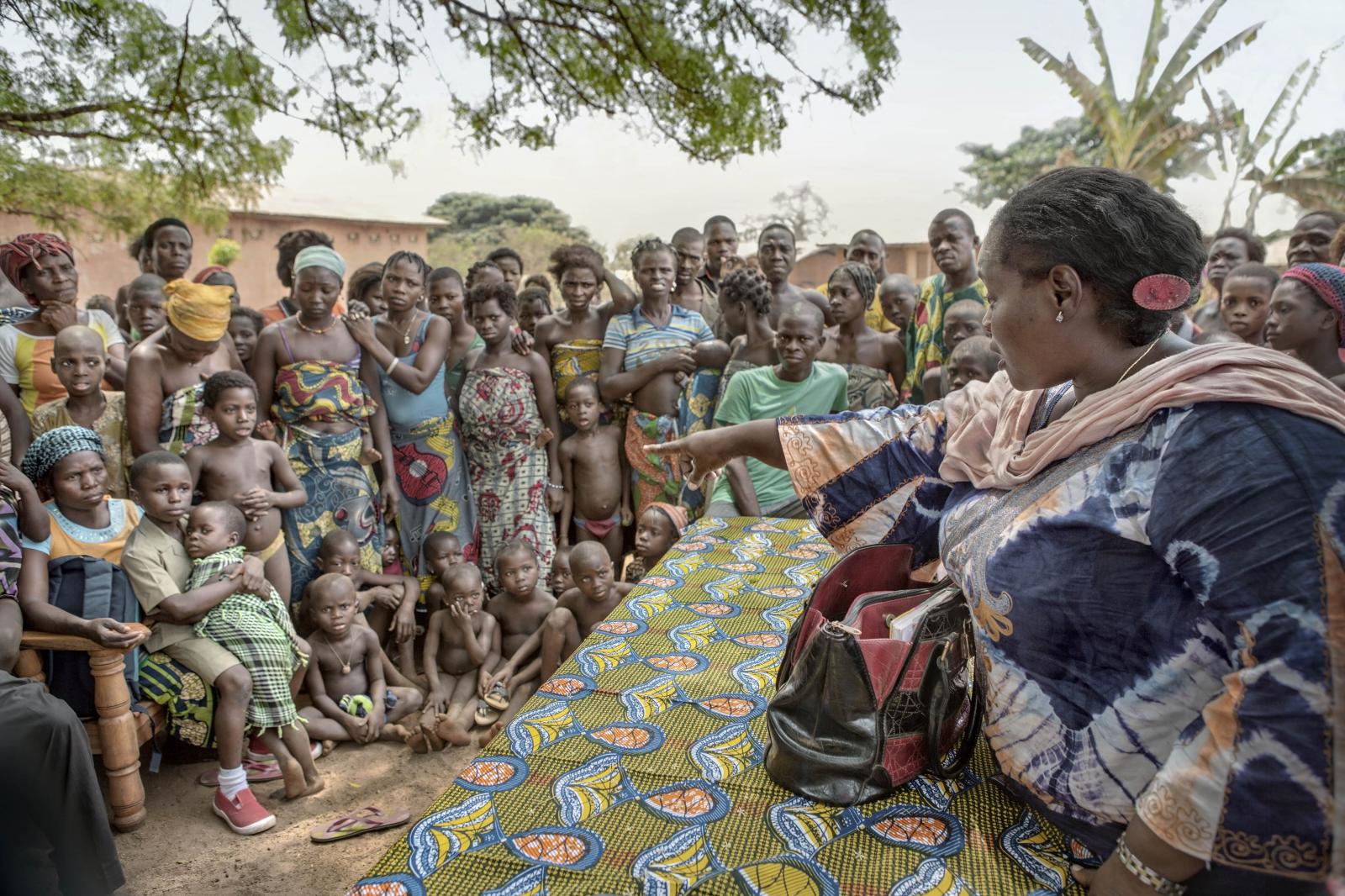 16 of 20 © 2021 Ana Palacios
I. is in the very moment of reintegrating with his family. The village chieff is now lecturing the whole village about the crime of human trafficking and sensitizing them to not selling their children to traffickers even if they are offered a better life for the child. I. is 12, and worked in a fabric shop in Nigeria for almost 2 years. 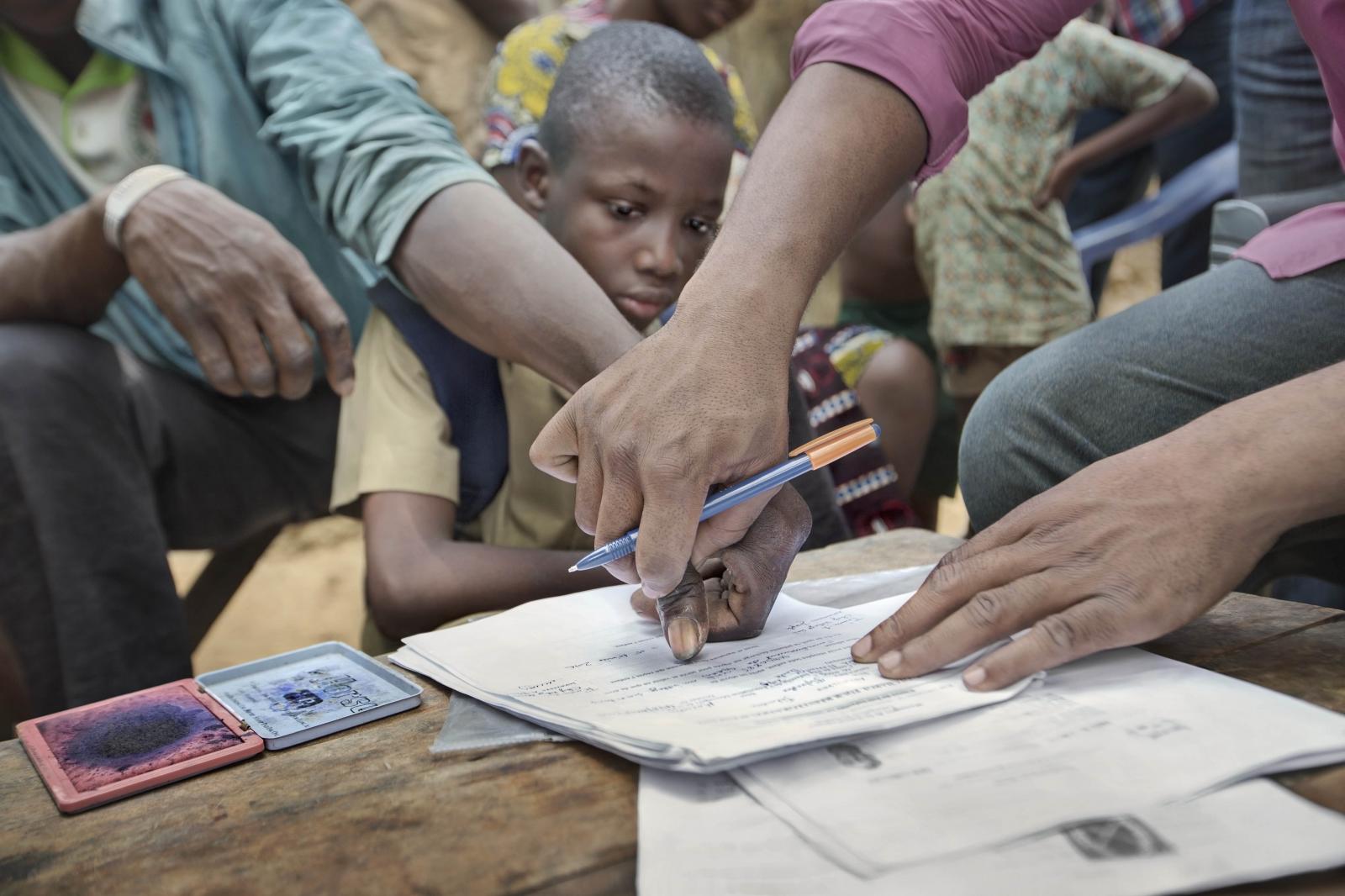 17 of 20 © 2021 Ana Palacios
S.`s father is now signing the agreement of the reintegration of his son back to the family, being withessed by the villagers, the village chieff and the NGO social worker. This way the whole village is aware of the situation and will control the father does not sell S. again. 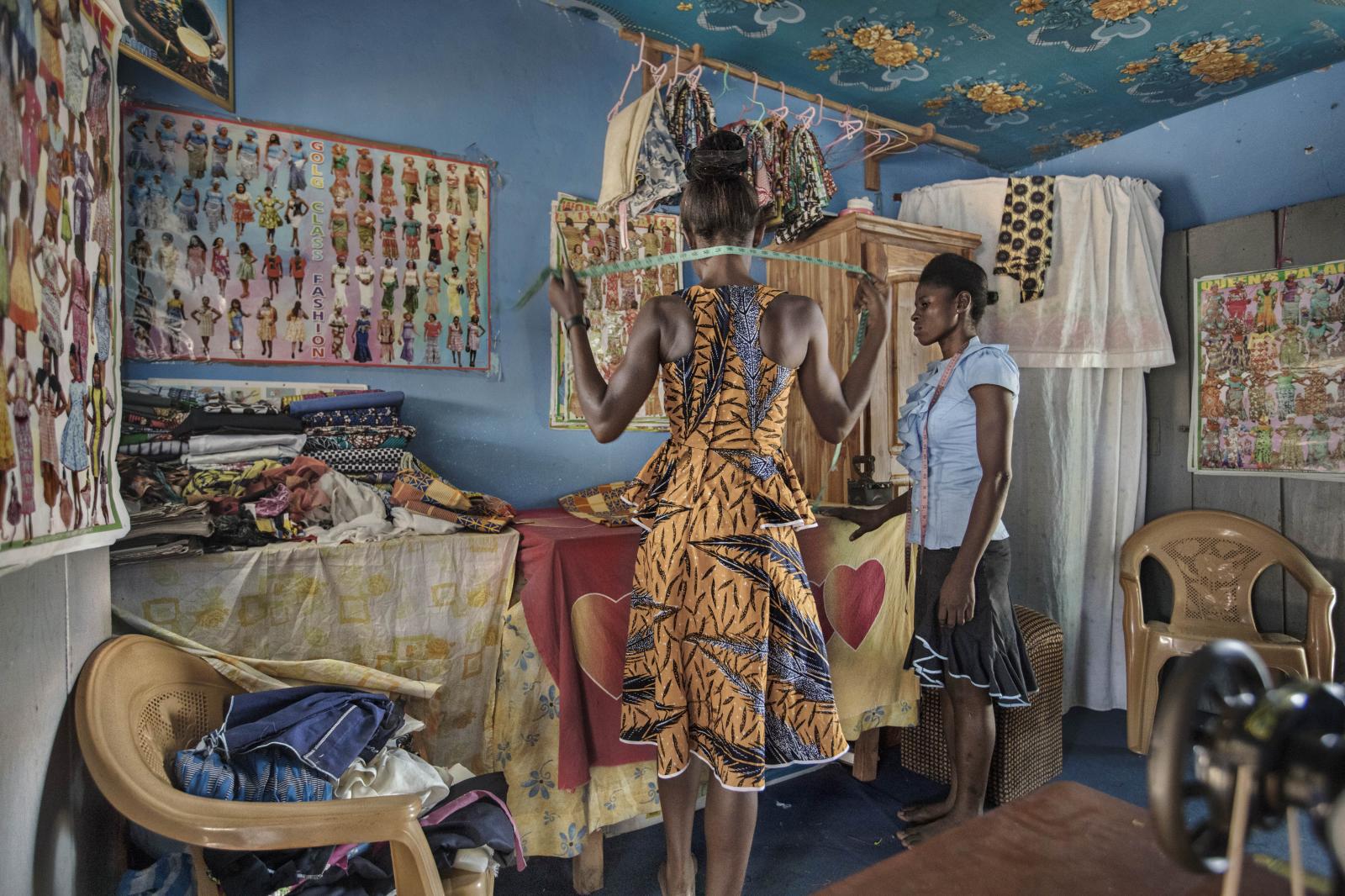 18 of 20 © 2021 Ana Palacios
X. victim of human trafficking, is an apprentice at a little tailoring workshop in Lomé. if trafficked children cannot be reintegrated with their families, gobernment and NGOs proceed to proffesional schooling, so children can learn an activity to be able to access the work market eventually. 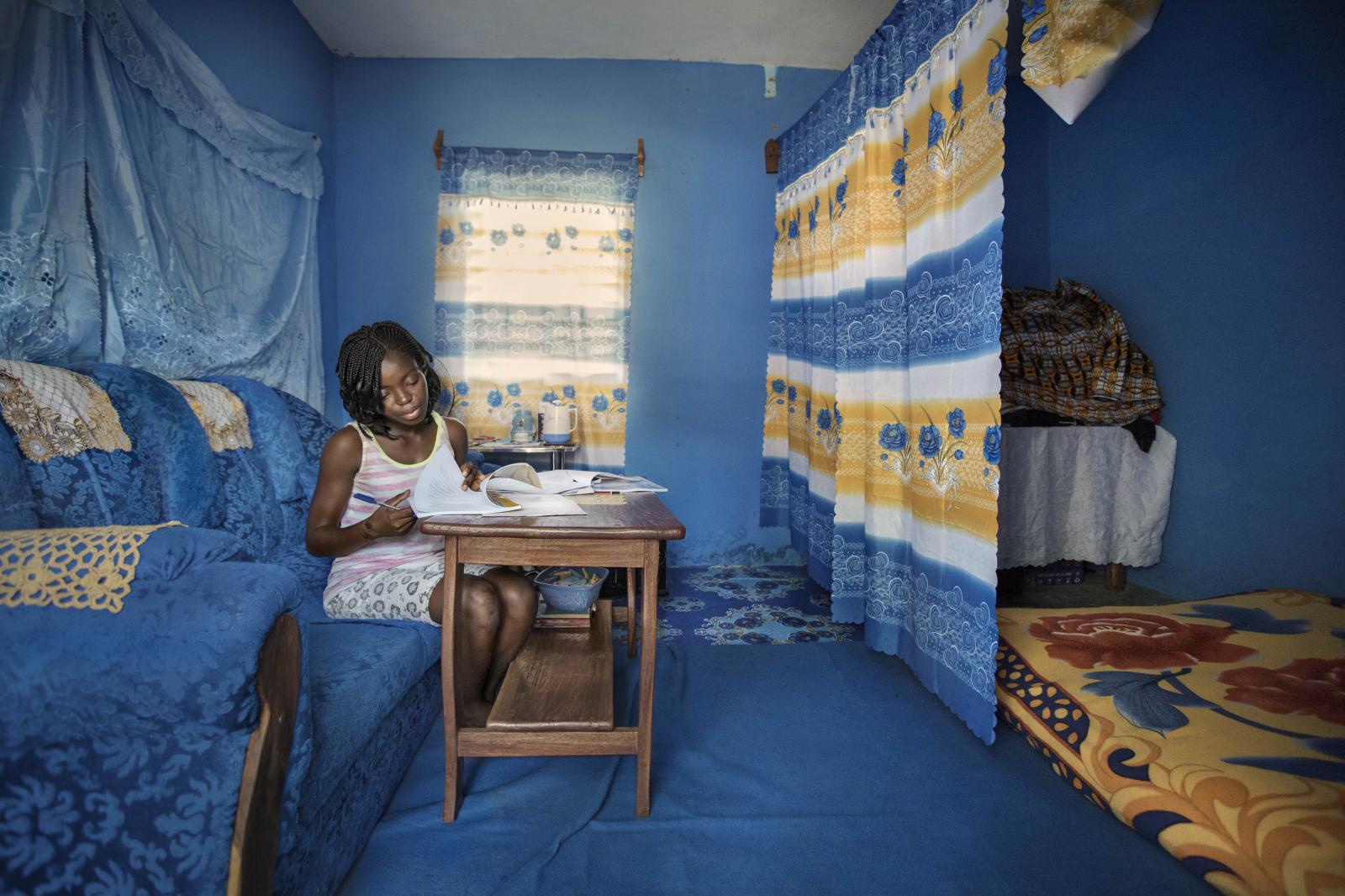 19 of 20 © 2021 Ana Palacios
E. is from Ghana and she was sold by his father to a faily in Togo for domestic works. Salesians Missioners aborted that ilegal activity and cater her in their Jean Paul ll Foyer. After a few years there and no option to be reintegrated with her family, she is now at second year English Literature B.A. at the University of Kara. While she was studying at school, she worked on her free time and made some money selling chemical products such as pesticides. She got some money to hire her own place (fully seen in this picture) near the university. Her dream is to be a translator for the American president. 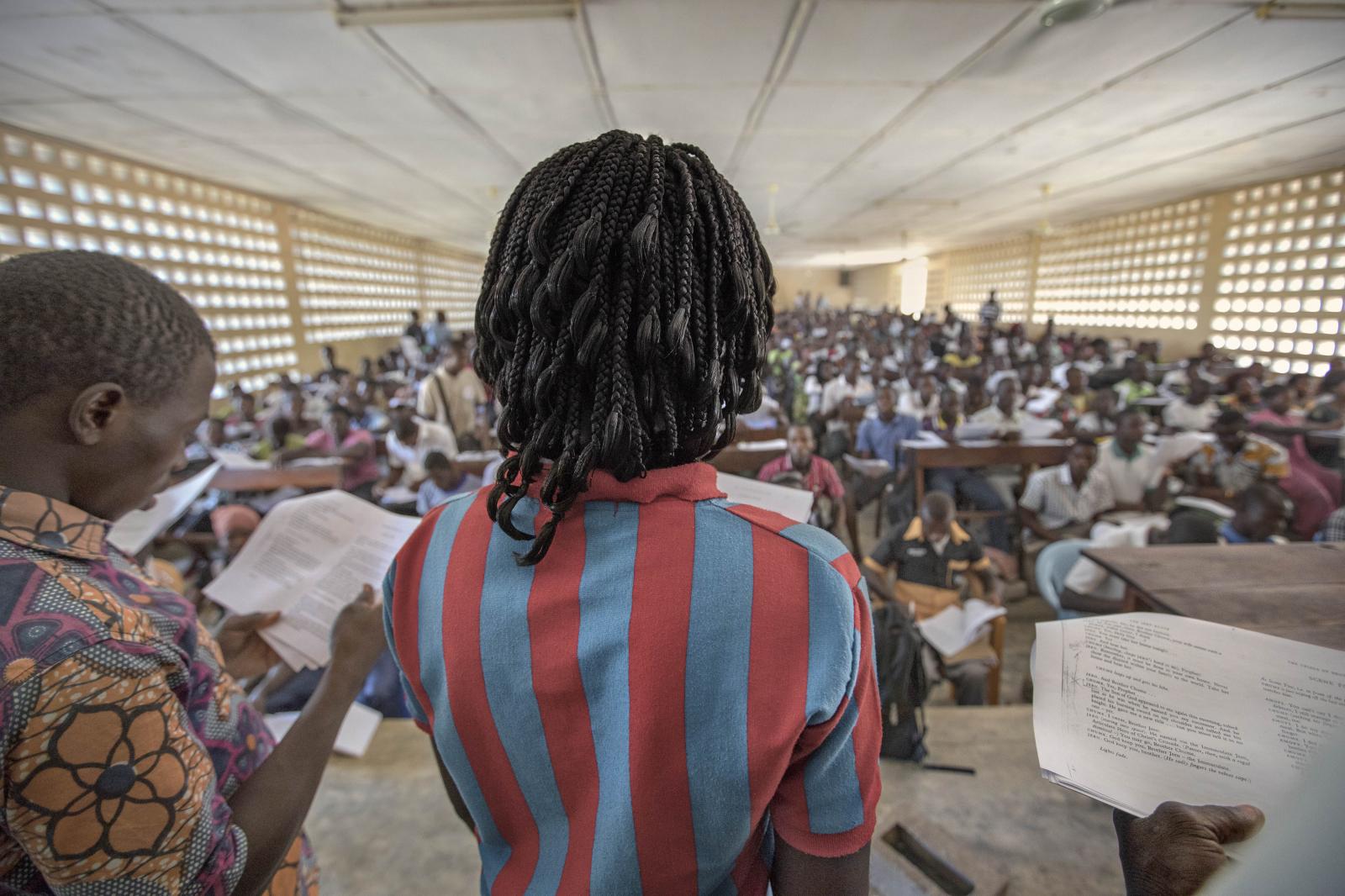 20 of 20 © 2021 Ana Palacios
E. is now in class playing a part on the play The trials of Brother Jero by Wole Soyinka. E. is from Ghana and she was sold by his father to a faily in Togo for domestic works. Salesians Missioners aborted that ilegal activity and cater her in their Jean Paul ll Foyer. After a few years there and no option to be reintegrated with her family, she is now at second year English Literature B.A. at the University of Kara.
Public Story
The rescue of a slave child
Copyright ana palacios 2021
Date of Work 07/01/15 - 02/28/18
Updated 02/04/20
Location Togo, Gabon and Benin
Archived as Children, Discrimination, Documentary, Domestic Violence, Education, Family, Freedom, Health/Healing, Homelessness, Hope, Human Rights, Hunger, Illegal Trafficking, Isolation, Lifestyle, Loss, NGO, Orphans, Photography, Poverty, Sorrow, Youth
What happens after a child in slavery escapes? How are their broken childhoods rebuilt? Is there a way out?

This documentary project documents the experience of thousands of children who are bought and sold as slaves in West Africa, the region with the world's highest rate of child labour. Her work shows that there is a way out for these victims of modern slavery, a “back door” which some of them manage to find, open and step through to live their lives in freedom.

Various NGOs work in the area, caring for them in centers intended to repair these broken childhoods and reintegrate them in society following five steps: slavery, identification, rehabilitation, family reintegration and job oportunities.
www.thebackdoorproject.net

By Ana Palacios / Tanzania — Tanzania is a country of forty million people belonging to more than a hundred different tribes and speaking..
Jan 31, 2020

By Ana Palacios / Uganda — Art is the expression of the soul. When day-to-day existence is a fight for survival, time and space for..
Jan 31, 2020

The skin of Africa

By Ana Palacios / Benin — “Benin under your skin” documents the daily life of the doctors and patients in hospitals,..
Jan 31, 2020