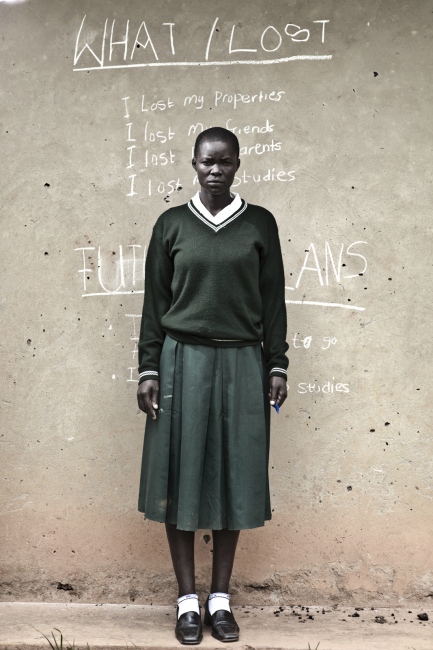 Alice Lotabu. Kidnapped in 1998, released six years later, in 2004. "i was 17 years old when I was abducted, I remember we walked for more than 24 hours to get to Sudan. Shortly after that I was fighting in the front against UPDF soldiers. All I did was to run all over while people died around me". 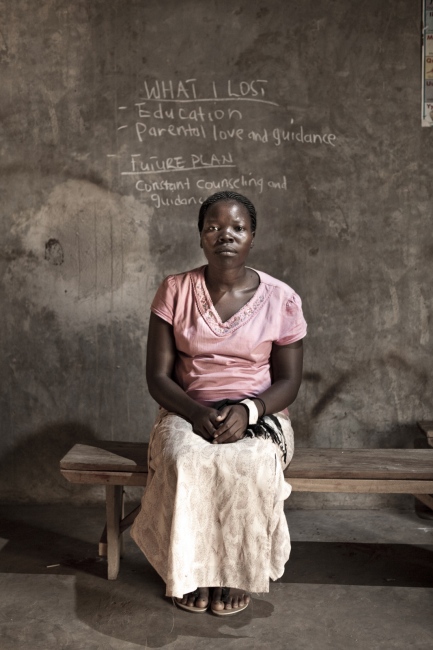 Lucy Aold. Kidnapped in 1996. Released four years lter, in1999. Lucy ws one of the few survivors of the Atiak massacre in 1995, when in barely 24 horus a gripo or LRA soldiers took and massacred almost the whole town of Atiak, in the north of the country. "The only lives spared were those of children too young to be kidnapped and pregnant women, who were allowed to stay so that they would look after the children who could be kidnapped in the future. When they finished, we were obliged to clap. Only one year after they came back and took me" 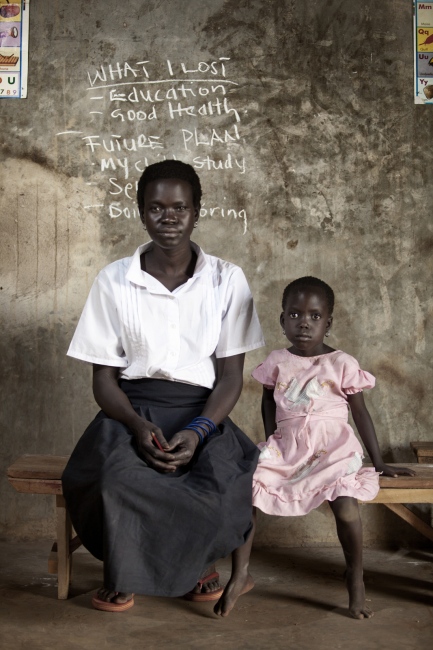 Alice Lakot. Atiak. Kidnapped in 1992. My father passed away because of HIV and my mother was murdered by the rebels. The worst thing was walking for entire days carrying food between the frontier of South Sudan and Uganda. I was forced to marry a soldier. We had two sons but both died."She managed to escape in 2003 during a fight among the LRA and the Ugandan Army. After returning home she married a man. After having a daughter she noticed he was positive and her husband left them. Now Alice and her daughter are HIV positive, but receiving treatment. 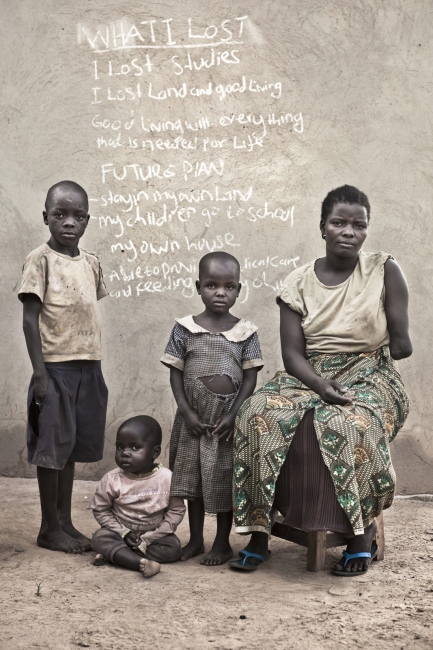 Margaret Aneno. Kidnapped in 1996. Released seven years after, in 1003. She was abducted together with twenty other children in her school. After the first period, Margaret was raped and bore her first child. She lost her left arm in a UPDF operation as a consequence of bullet wounds, bu she wasn´t rescued by the Uganda army until 2003. Her other two children are from different fathers who did´nt take responsability for them. 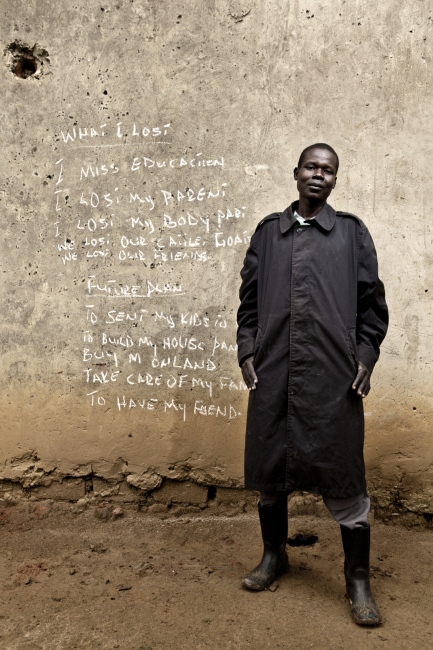 Daniel Opiyo. Abducted in 1995. Released in 2006. "One of my worst memories? When the UPDF attacked us in Southern Sudan. Many people died and many of us were injuried. I remember they have to heal our wounds using honey and water, because there was not anything else. When I ran away I renounced to my uniform, but when I came back to Uganda, I realized that I´ve been fighting almost my whole life meanwhile everyone was going on with their life.Thinking about that made me feel very, ver confused and lost..." 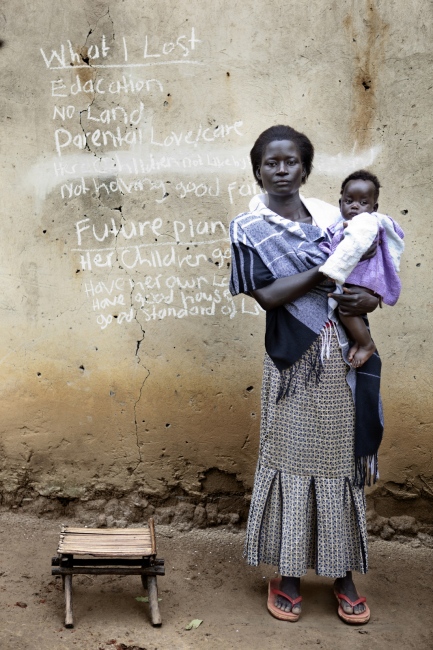 Vicky Abuyo. Kidnapped in 1996, released eight years later, in 2004. "In the LRA they beat me constantly becaus I couldn´t understand Acholy (Vicky belongs to the Madir ethnic group), and when I came back my brother disowned me for bearing a child to the rebels... What choice did I have in both cases? Was it my fault?" 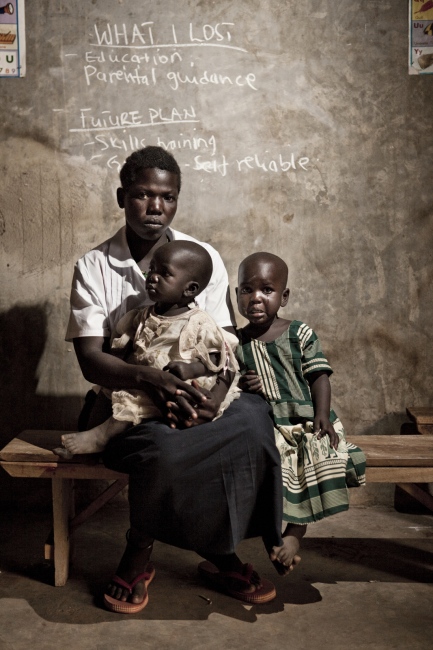 Florence Lakot. Kidnapped in 1998. Released eight years later, in 2006. For Florence and her two children the worse thing is the stigma and the isolation that comes with it. "I would like to go back to school and give my children a better life than the one I had, but I don´t have any money". 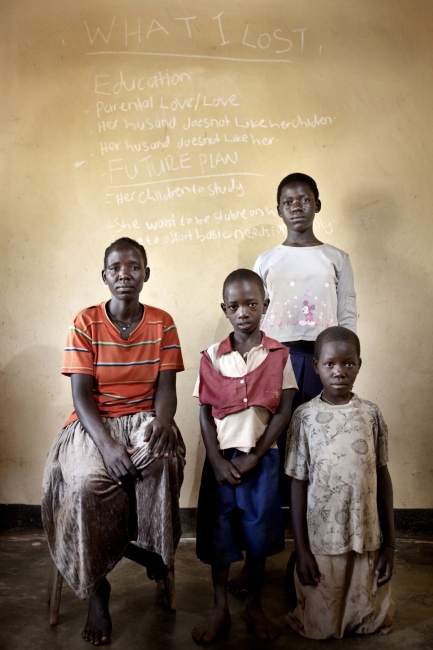 Betty Anyalo. Abducted from 1994 to 2004. "I had my first son when I was 15 years old. I got pregnant from a rebel. In 2004 I was already mother of three chldren. When I finally went back I had terrible times... My husband is also a former child soldier, but now he´s working for the UPDF (Ugandan People Defence Forces). He does´nt care about us and my incomes as a taylor doesn´t afford me to take them to school. I know I´m stigmatized as well as my sons, but we can´t do anything about it. Just hold on..." 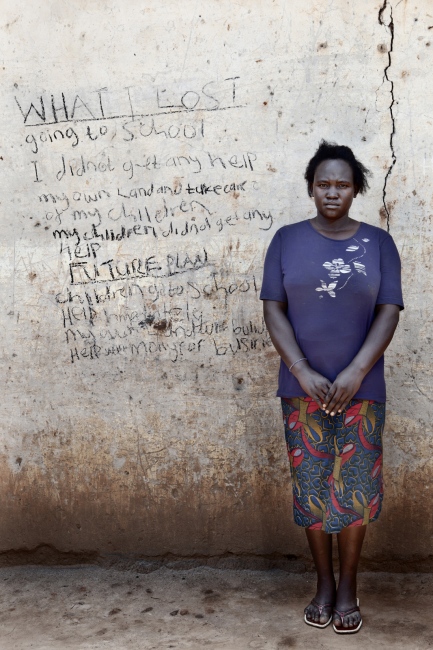 Grace Auma. Abducted in 1995. Released 6 years later, in 2001."After I got abducted I was given to a soldier. The beat me up all the time... Everyone was allowed to have sex with me, but the most terrible thing was fighting all the time with ugandan army... Of course I feel stgmatized, but I cannot afford anything else. I just don´t have money to move." 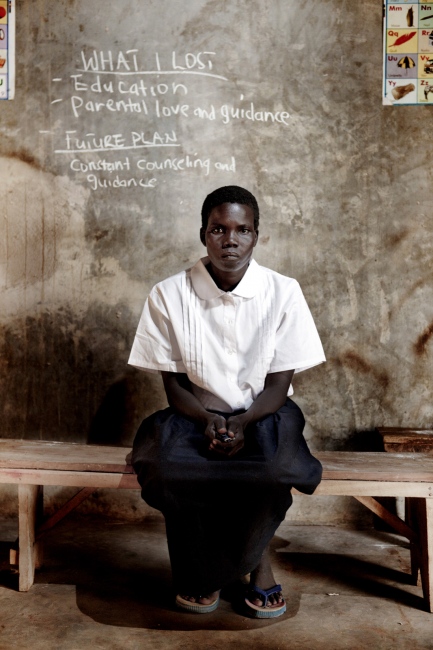 Nighty Akoko Abuducted in 1991. Released in 2004. "When I was 16 years old I was forced to cub to death a group of civilians who tried to escape from LRA. I try to forget and build a home for me and my sons, but many of my neighbours do not understand that and they don´t accept me as part of the community". 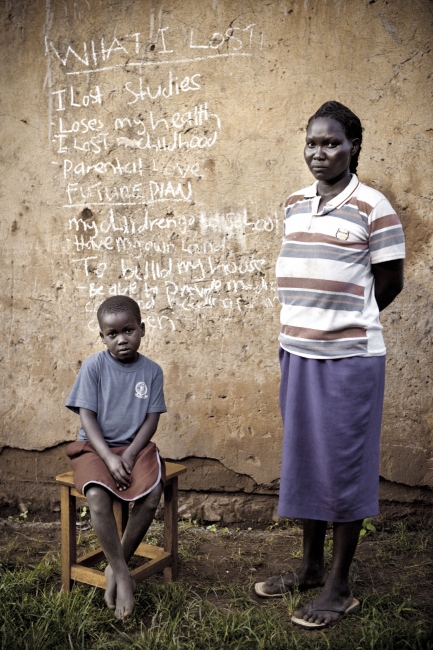 Florence Akello. Kidnapped in 1996. Released nine years later, in 2005. "I remember beatings and rapes that took place almost everyday in an indiscriminate way" . Upon her retirn she faced rejection, a neighbor even got to raping her elder daughter. "We had a really hard time but after moving to another town we got over it little by little". She remarried in 2009 and had two more children. 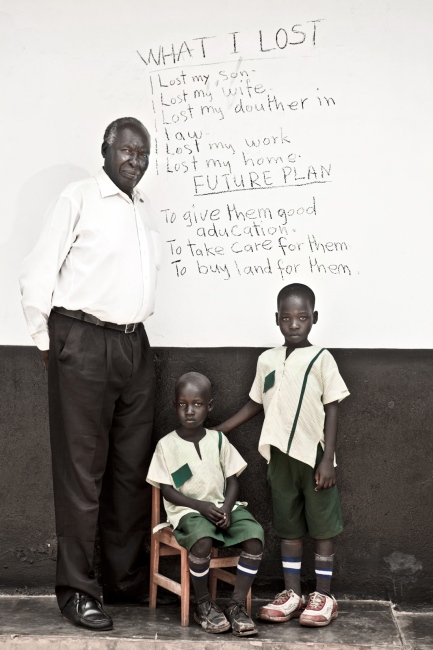 John used to work as a cop during but after Idi Amin took power he ran away as he was prosecuted for being part of the Acholi people. One of his sons was captured and murdered by the LRA and his daughter in law died few months afer. John took responsability of his two grandsons Emi Oding and Ivan Okello. 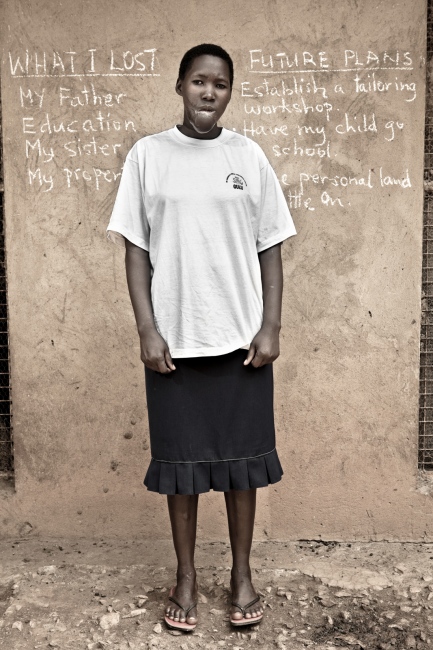 Nacy Abwot. Abducted from 1997 to 2003. "We ambush UPDF near Mount Imatong. It was a slaughter. In Palabek we did the same, but they finally hit me in Koch. When they shot, I just had time to realize I didn´t had energy to run anymore, si I tried to hide myself deep in the bush, and then I collapsed in a dead faint. When I woke up I was surrounded by dead bodies. I felt no pain untill I walked towards a near stream and saw how water fell down my chest when I realized I had lost my lowe jaw" 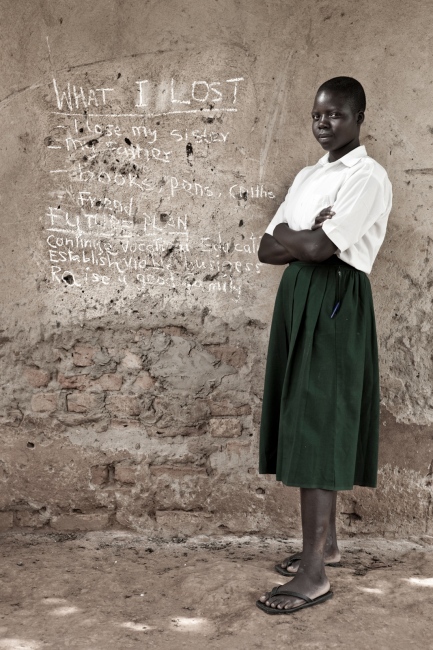 Nacy Aromorach. Kidnapped in 2003. She escaped two weeks later."The night they came I was hidden in my school. As I was the younger one, they forced me to guide them to my family and friend´s hideouts. One of them tried to escape. Then, they forced us to cub him to death and slaughter him. They put his remains in a bag and then they left it in the middel of the path." 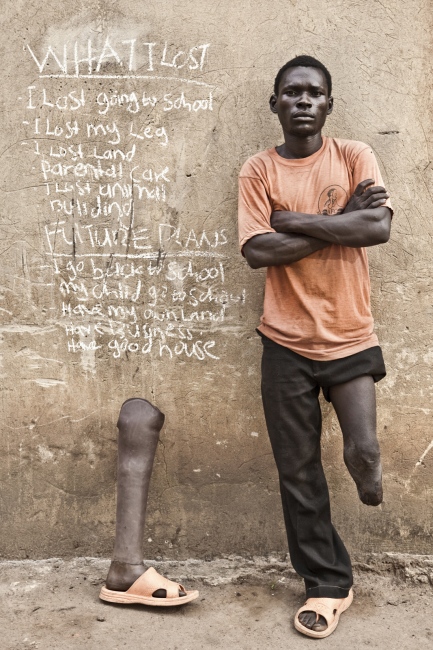 John Otto Baptist. Kidnapped in 1998. Release nine years ater, in 2007. "I was 12 years old whe I was abducted. I got to comand over 200 people. Sudan´s army provided us with weapons, uniforms, food... Everything. But after the Ion Fist operation of the Ugandan government, we were isolated. "We attacked villages and devastated small towns to get food. I lost my leg in one of those skirmishes. Once youré part of the system it is not easy to escape. You accept thas is your life, to kkep killing and being a soldier. I still have nightmares of those days" 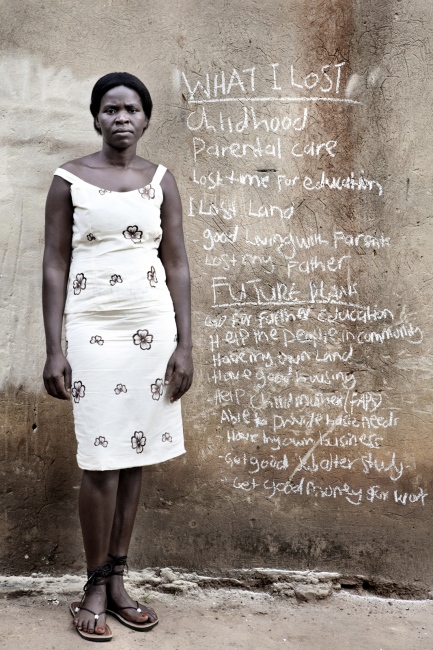 Grace Arach. Kidnapped in 1996, released five years later, in 2001 "After beig abducted, an official requested me for his house. He treated me fine, but soon Otti Logoni (one of the boodest men in LRA) threatened me with his gun and forced me to go with him.. I was only ten years old. "Grace managed to escape the LRA after walking for days to reach the border with Uganda. She enrolled in school, and after doing two years in one she finished her studies. Currently, Grace holds a degree in Social Work and collaborates with the NGO World Vision to reintegrate former child soldiers like herself. 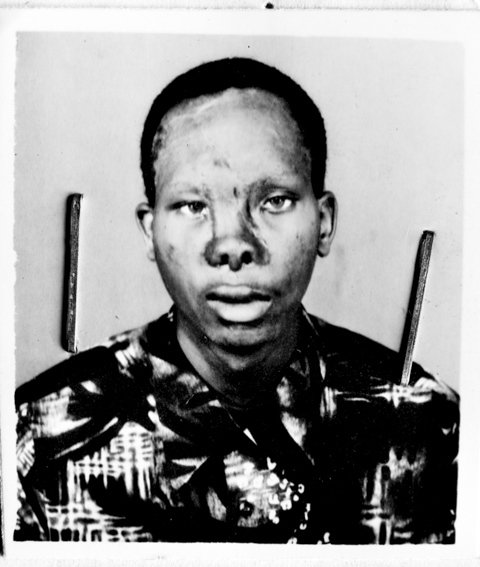 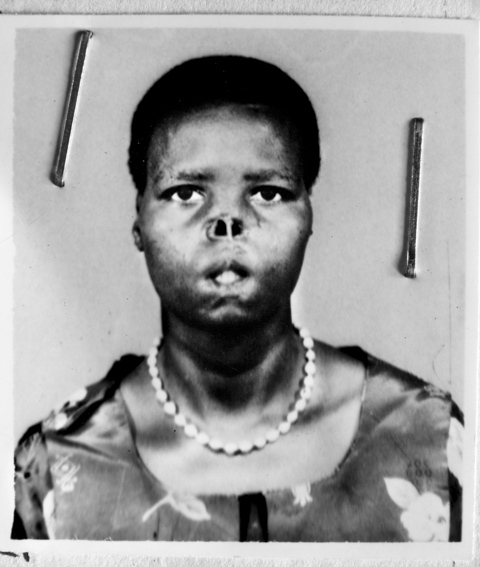 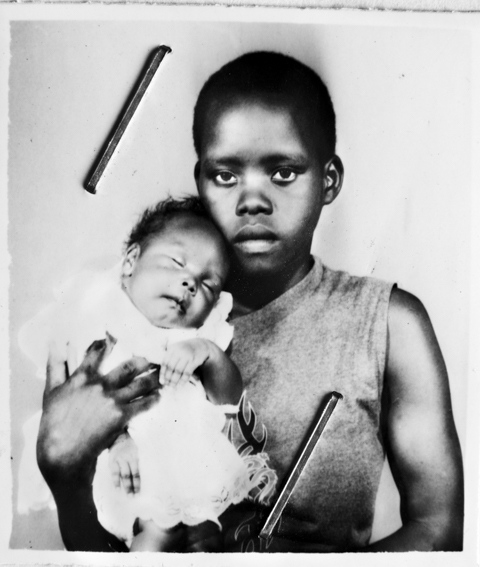 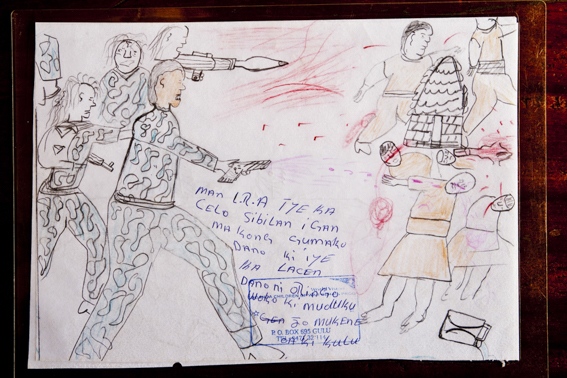 20 of 21 © 2021 Alvaro Laiz
The war in northern Uganda began in 1986 and has been marked by the LRA's well-documented brutality against civilians, including the seizure of children to be used as fighters and sex slaves, and the widespread use of mutilation, cutting off the lips, ears, noses and limbs of victims. The violence has led to nearly two million people being displaced from their homes and being forced to live in refugee camps. Human rights groups have also reported war crimes by the government army, the Ugandan People's Defence Forces.

Behind that conflict lies identity, territorial and economic reasons between. This inequality was born generations ago, from the random borders stablished after british decolonization that forced to live all together farmers with nomads, christian with islamic. The LRA leader, Joseph Kony wants to overthrow Museveni from ugandan government and establishing a teocratical ten commandment-based state in Northern Uganda.

Once J. Kony was included among the most wanted war criminals list Sudan Government stop supporting LRA and allowed UPDF (Ugandan People Defence Force) to enter Sudan in order to chase down Kony. Today the horror has gone from Uganda, but it hasn´t vanish. It just moved away. The abductions, killings and slaughterings committed by the LRA have a new scenario in DR Congo.
Public Story
FUTURE PLANS
Copyright alvaro laiz 2021
Updated 03/03/18
Location Gulu
Archived as child soldier,

By Alvaro Laiz — IT WAS THE TIME WHEN THE UDEGEI PEOPLE, SEEING A DEER, BELIEVED THEY SAW A DEER-MAN. SEEING A TIGER, THEY..
Apr 25, 2016

By Alvaro Laiz / dersÃº — The Russian Old Believers originated in the 17th century when some believers didn’t accept the reforms..
Jan 17, 2016

By Alvaro Laiz / UGANDA — In Uganda, by the beginning of the nineties, corpses kept piling up in the morgues and nobody knew what was..
Mar 5, 2015