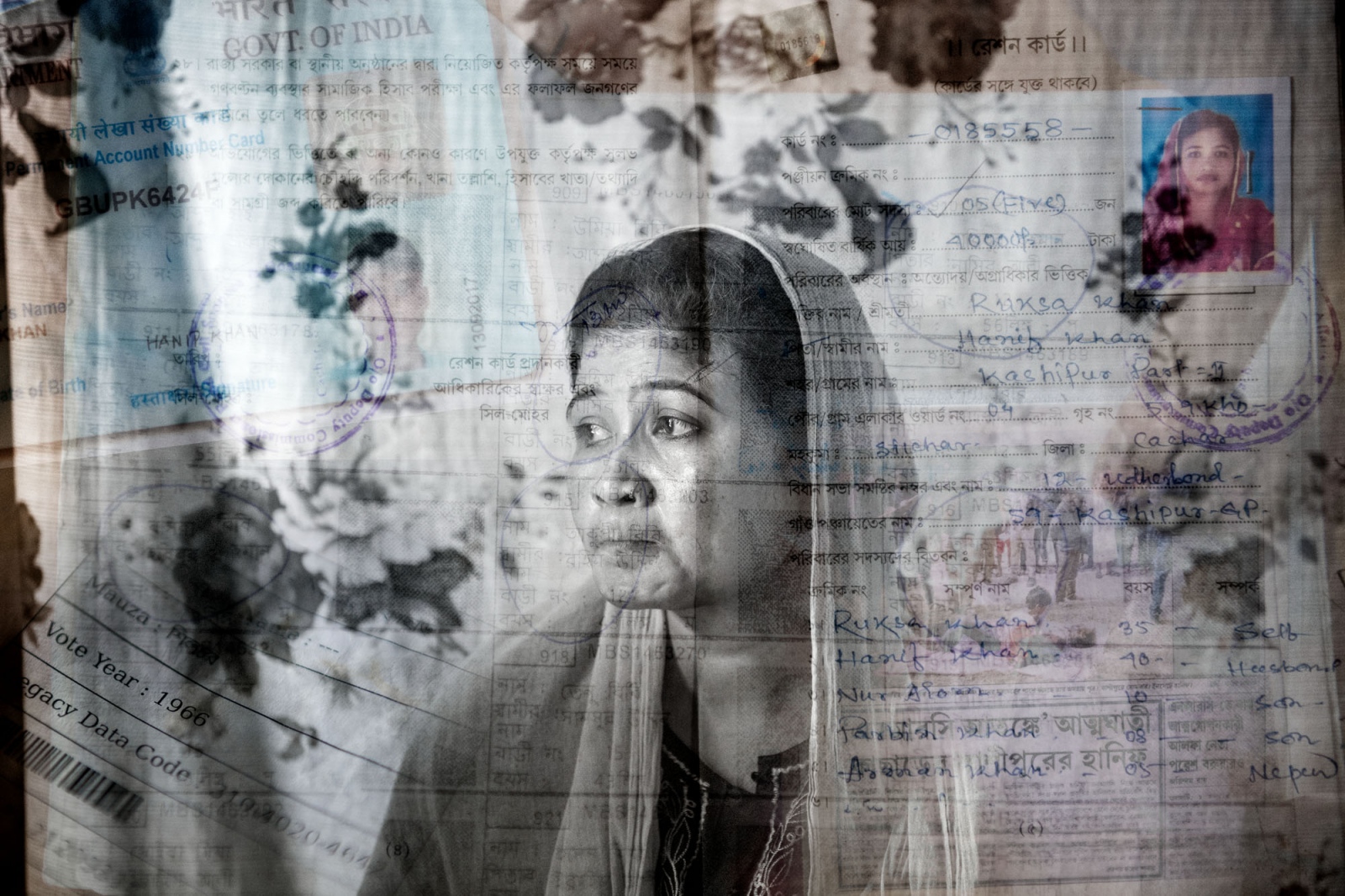 Ruksha Khan, 29 years, is not on the NRC final draft list. When her husband found out that he was not on the list he panicked and took his own life. Ruksha Khan is now left alone to care for their three children. She has documents showing her parents voted in 1966, a ration card, id card and tax listings proving her citizenship, but they are not accepted by the NRC authorities. 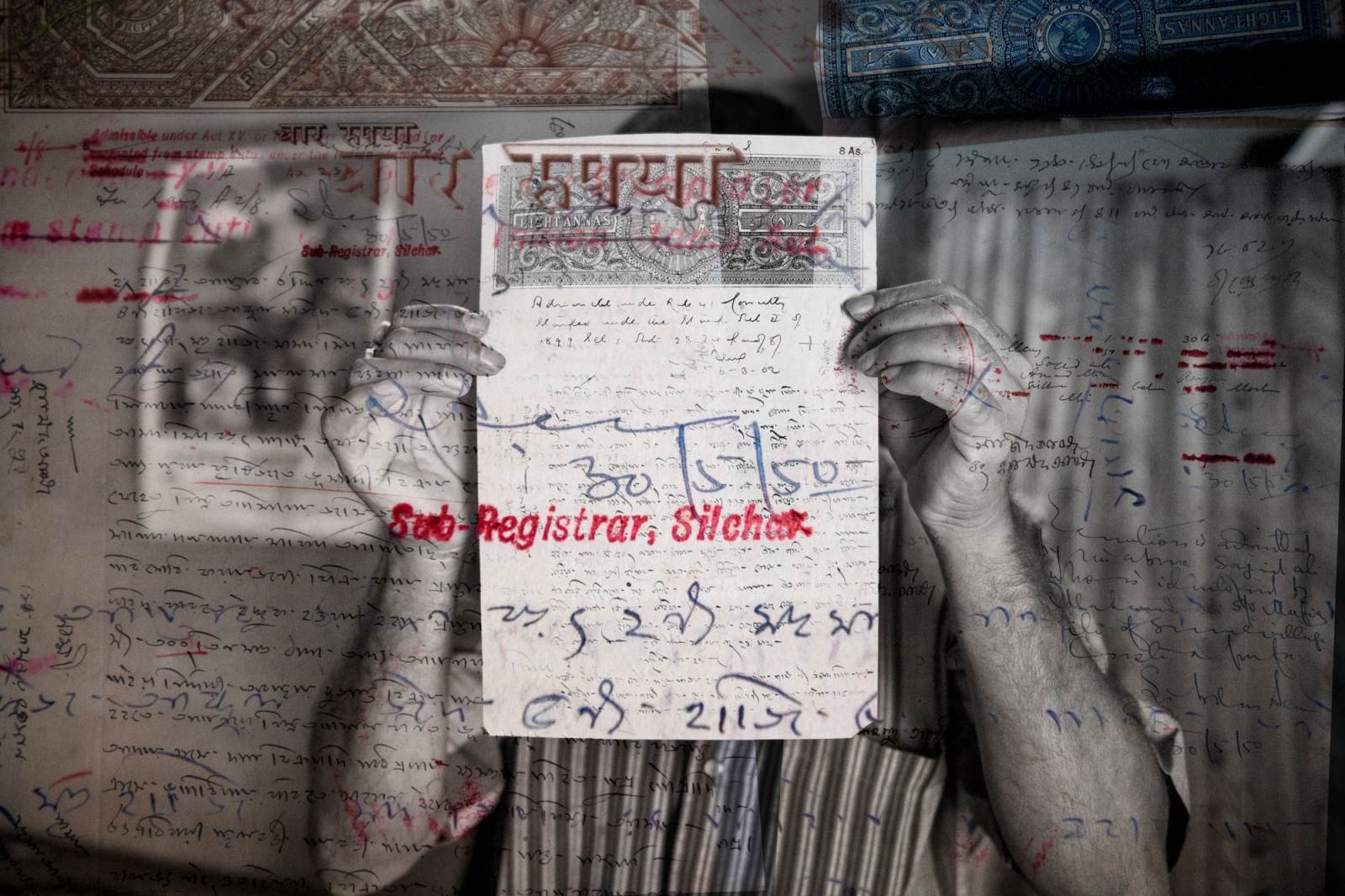 A man, 52 years old, not listed in the NRC list. He is working a government job and has documents proving his family was owning land in the region as far back as 1903, but still he is not on the NRC Final Draft. He thinks it is a technical mistake and will get fixed. 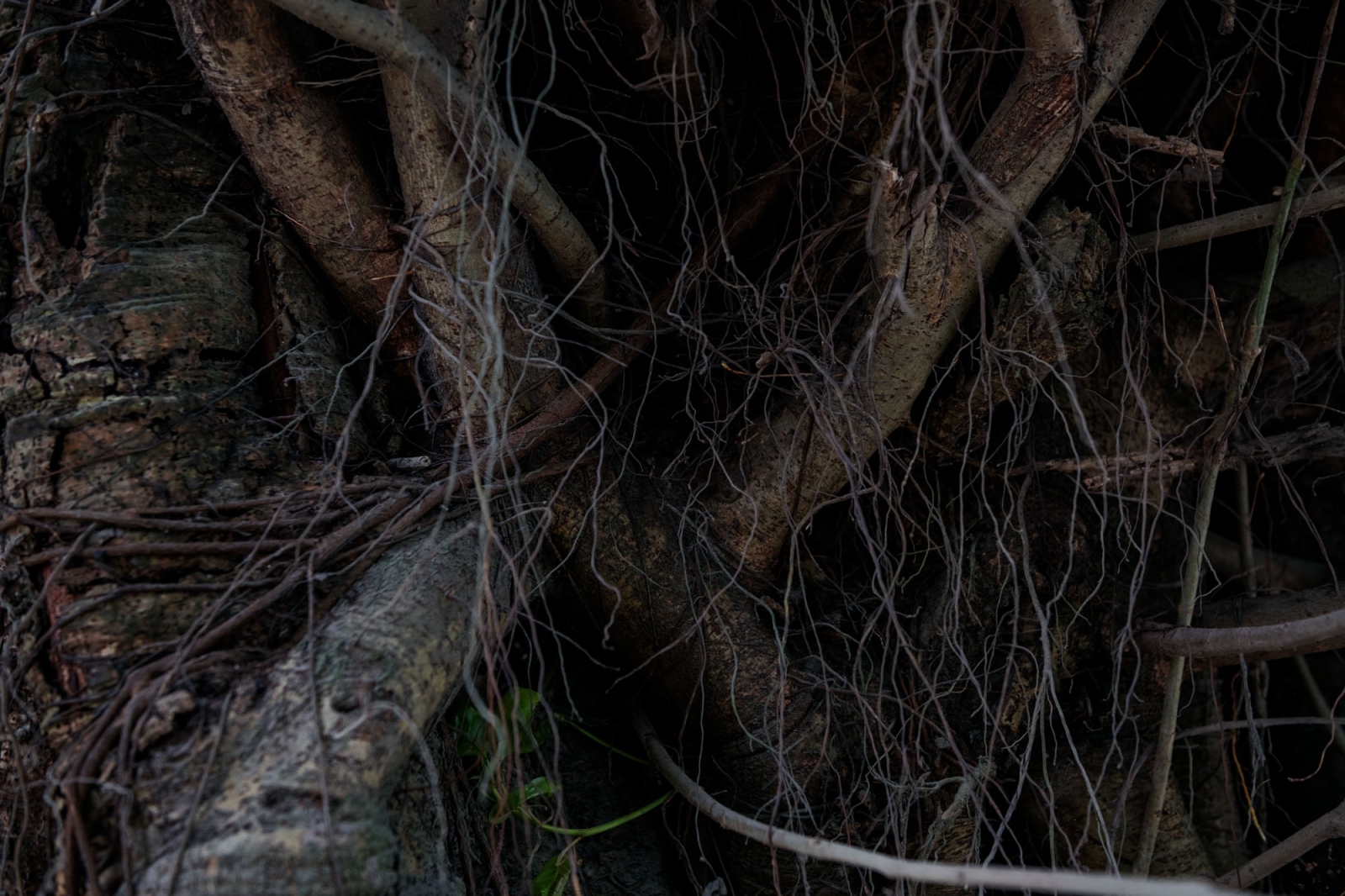 Tangled roots on a tree outside Silchar, Assam, India. 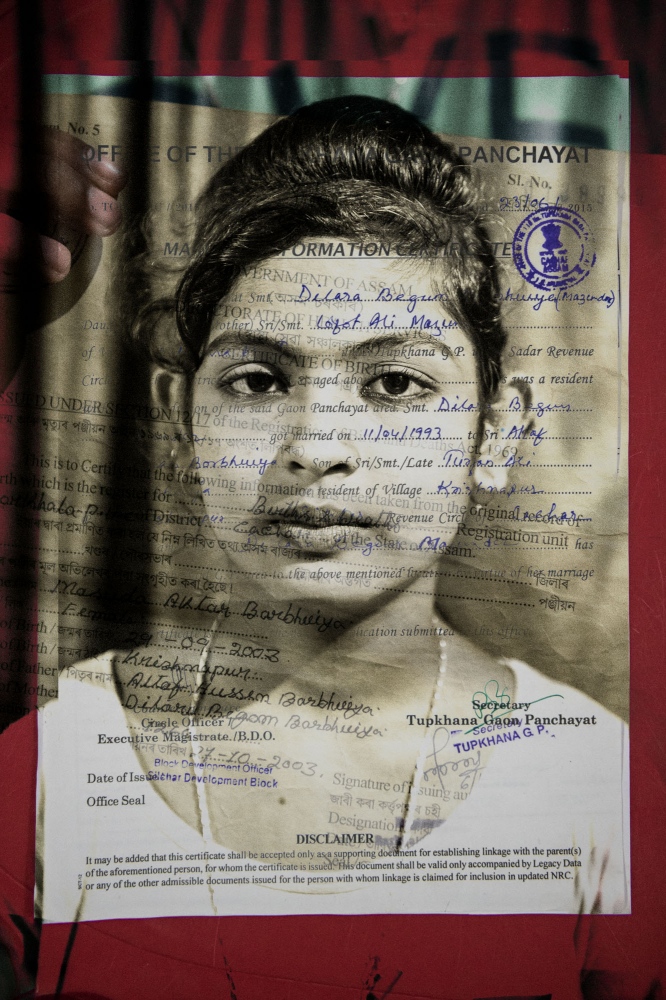 Nasuda Aktra Barbhuiya, 14 years old. She and her mother are not in the NRC list, but the rest of the family is. They have provided her birth certificate as proof, but it is not accepted. Her mother's name has been left out due to a misspelling of her name on her marriage certificate. It is common that only one or two members of a family are excluded from the list, often for no obvious reason, or simple errors such as a misspelling. 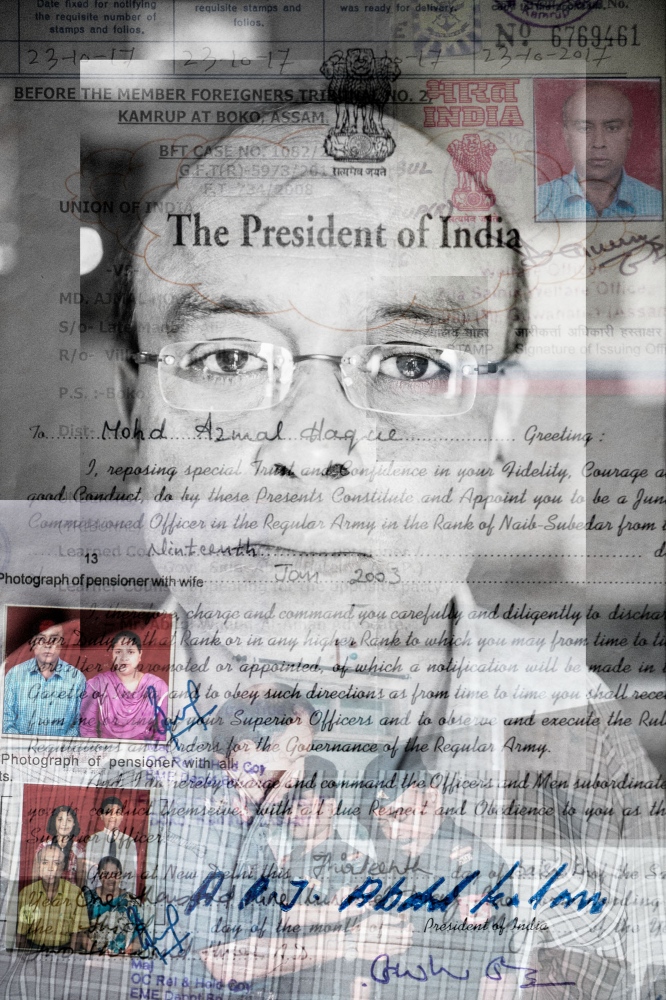 Azmal Haque, an ex junior commission officer for the Indian Army. He served in the army for 30 years before retiring, and has been given a presidential award for his service. He also gets his pension from the government. He is now excluded from the NRC and thus considered to be a foreigner.

Panorama of Barak river outside of Silchar, Assam. 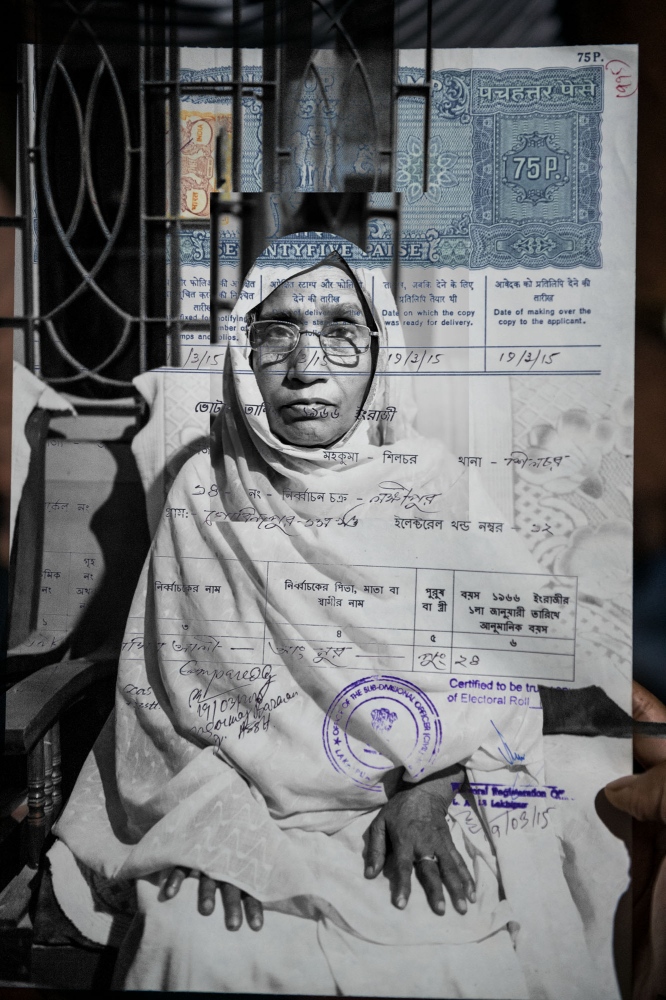 Fanigun Nessa, 67, has document proving both her father and herself voted in 1966, but still she is considered a foreigner and is not on the NRC list. 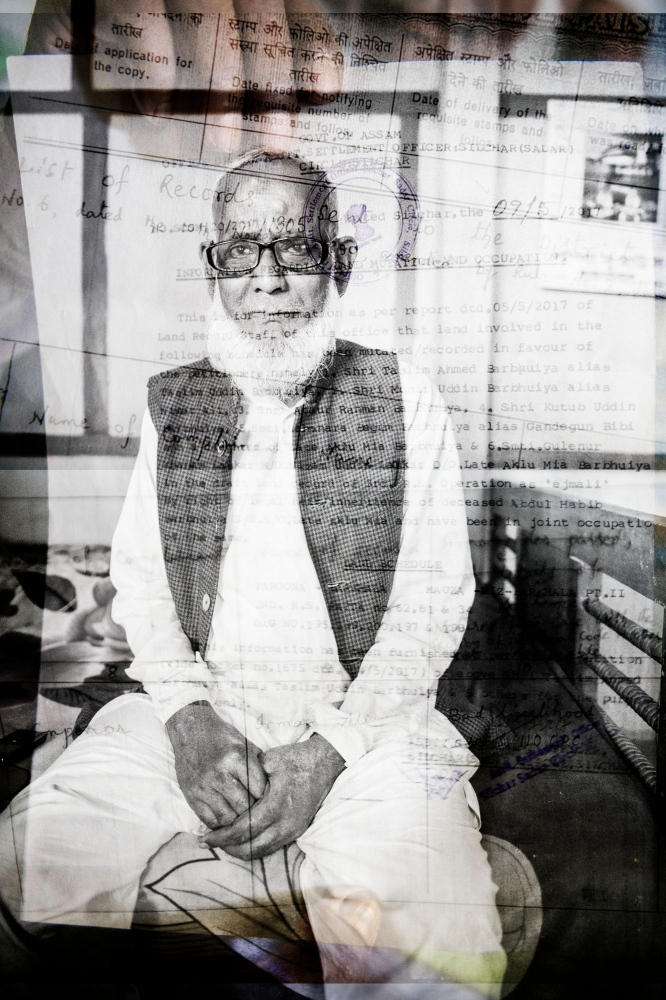 Tasnim Ahmed Barbhuija, 75 years old. His grandfather was a "freedom fighter" in the non-cooperation movement in 1921, and Tasnim has the documents to prove it. His own name also appears on a voter list from 1966. But he and both his siblings are still not listed in the NRC, thereby branded as foreigners. 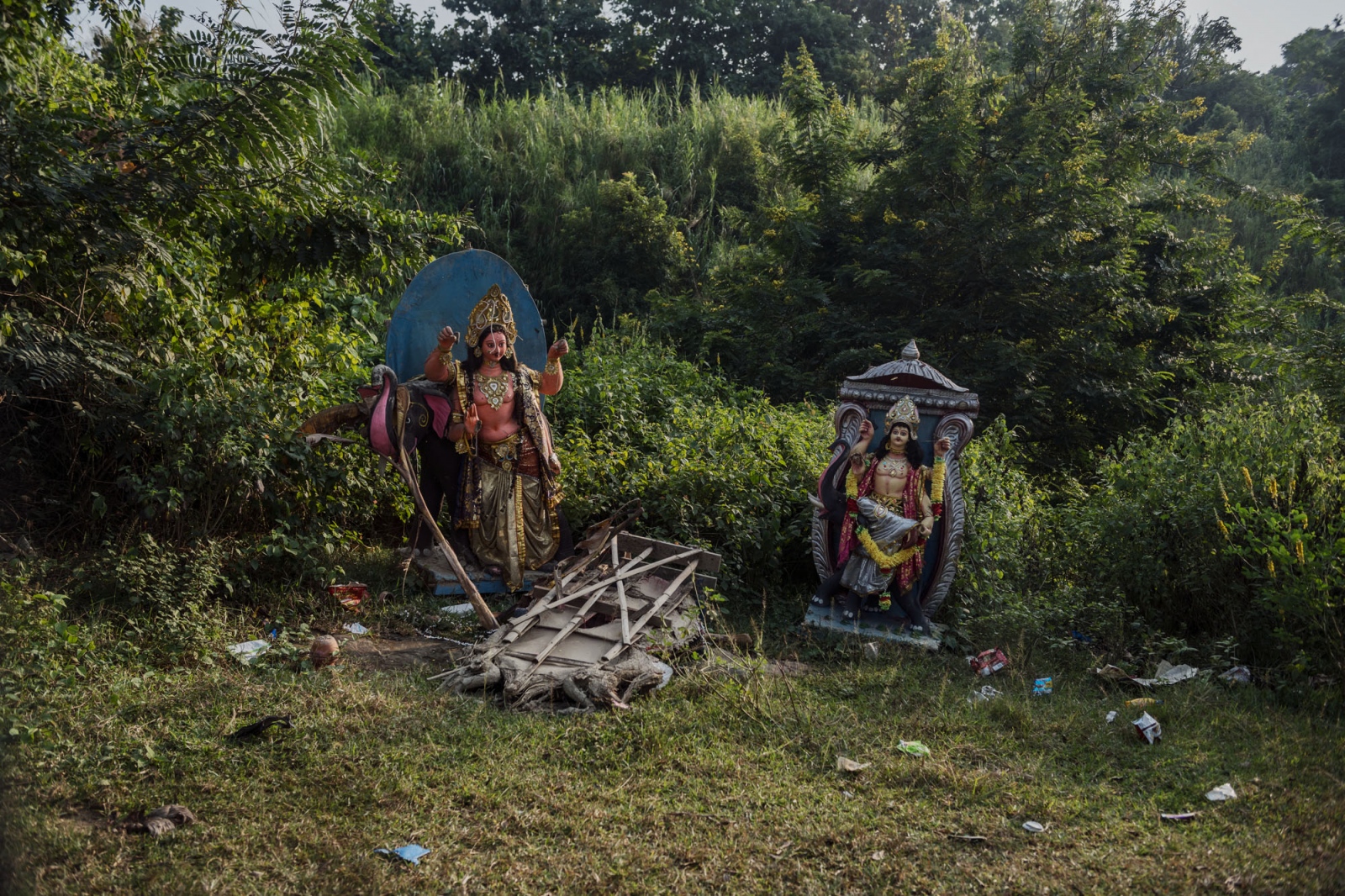 Hindu statues along a a road leading out of Guwahati, Assam, India. 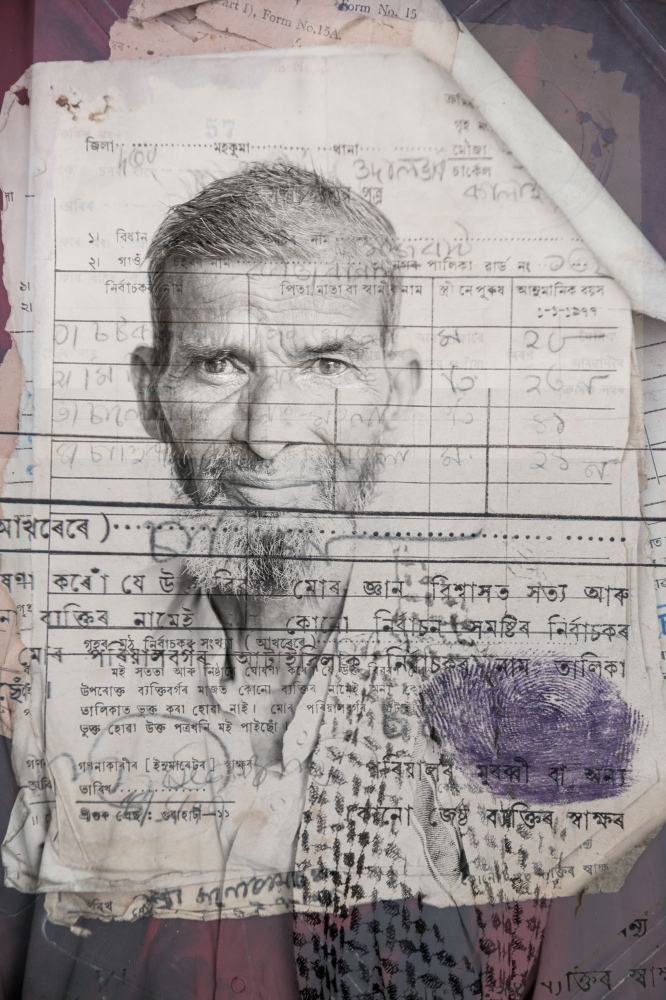 Zutku Seikh, 68 years old. His grandfather's name was in the 1951 NRC, and he himself voted in 1985 and has payed tax on his land and income since the 1960s. His name is not in the NRC and he is declared a d-voter, which means no one in his family of eight is in the list either, per association with him. "My head rings, I think of this all day, it is driving me mad. I worry about what will happen to us and our children", he says. 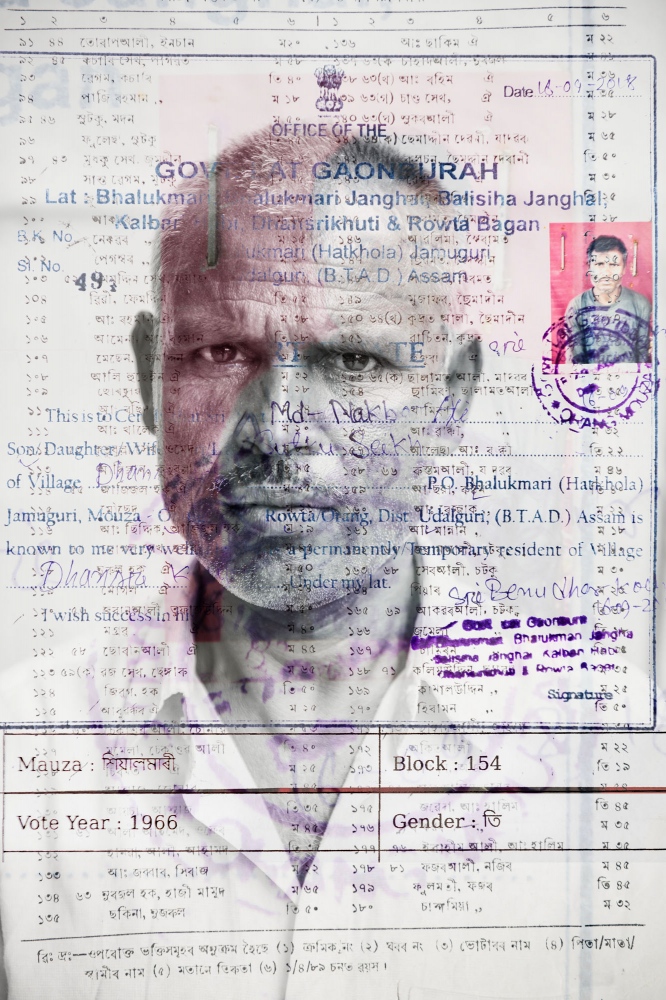 Nekbur Ali, 48 years old, was declared as a d-voter (doubtful voter) by the Election Commission without explanation. He has his parent's voter list from 1966 as well as a letter from the village head who confirms his identity. 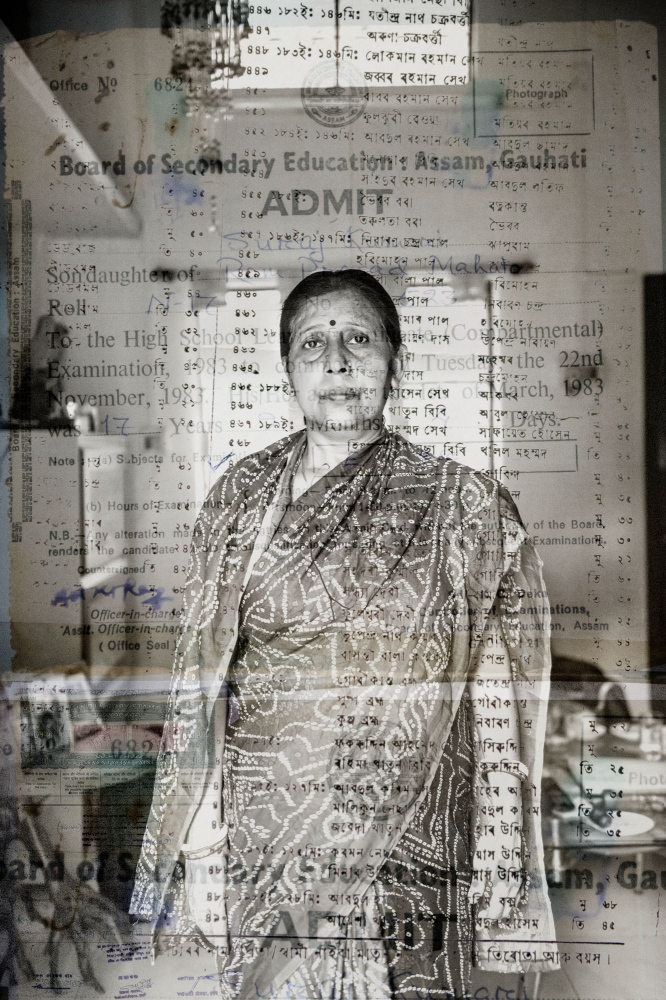 Suraj Kumi's family is from Bihar originally but has been living in Northeast India for around 100 years, first settling here as tea plantation workers. She has prodvided all sorts of documents proving her citizenship, but the NRC have confused the names of her and her husbands parents, and now she is excluded from the NRC list. She hails from a so called "tea tribe", a minority of tea laborers often lacking documentation of land ownership and voters rights. "I am born and grown with this water, air and earth, this is a violation of our dignity", she says. 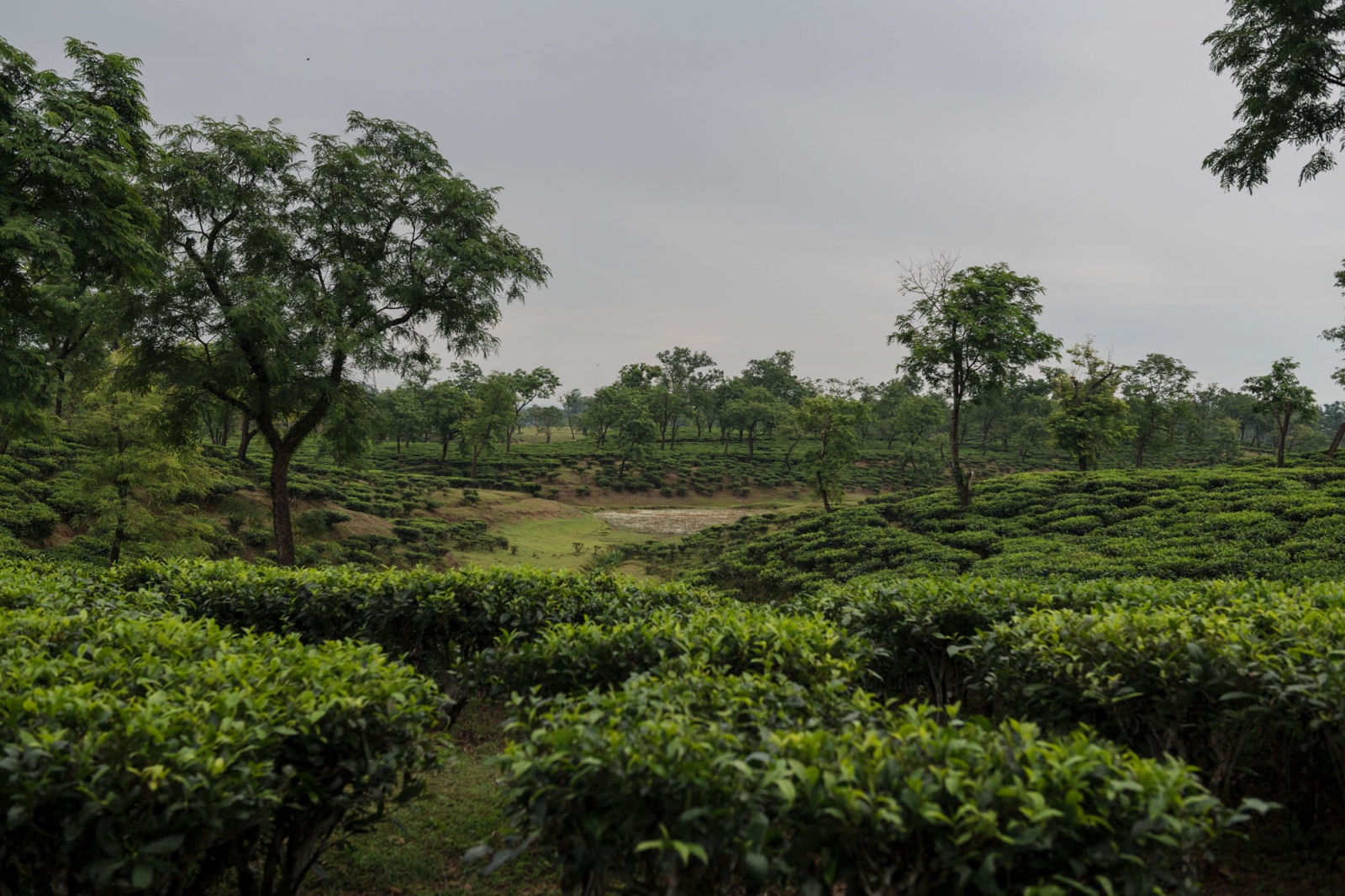 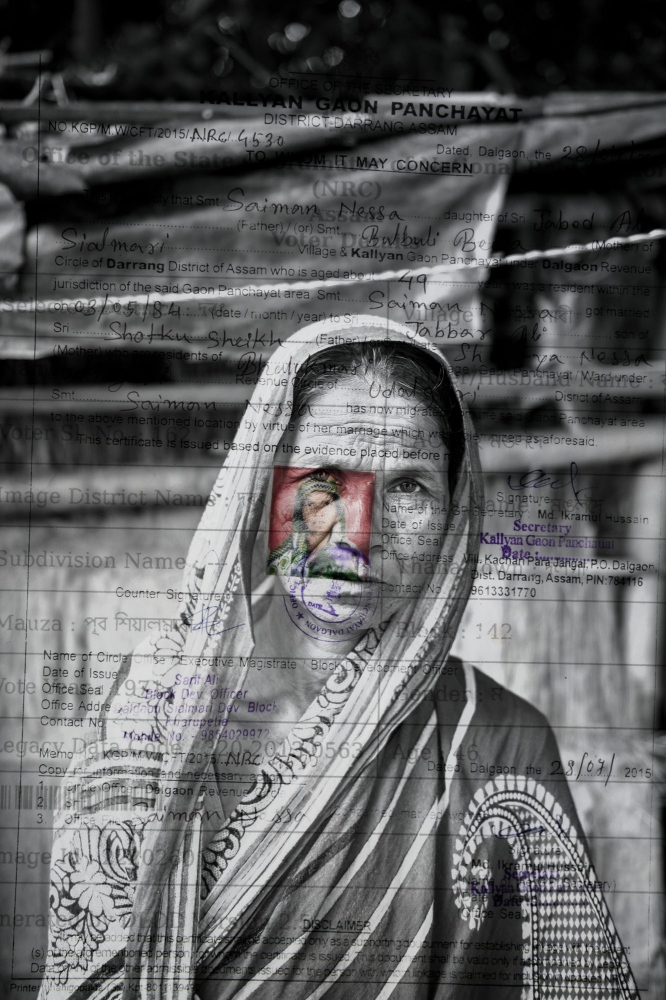 Saimun Nessa, 52 years old. Her husband was put in a detention camp because of his d-voter status. She is also a d-voter. He died in the detention camp on October 4, 2018, after 11 months in detention. The police said the reason of his death was an asthma attack, but Saimun Nessa says he never had asthma or any respiratory problems. "He was the only earner, I have a terrible life now. We had to sell everything, cows, goats and chickens to afford to fight the case in court. We have two sons and six grand children", she says. 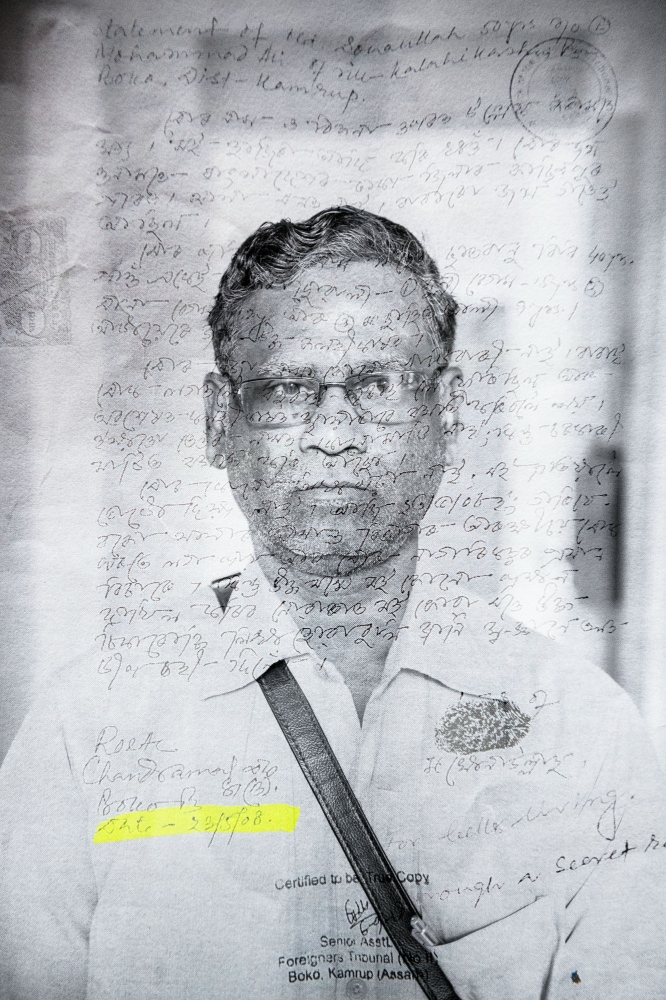 MD. Sanaullah, honorary captain, served in the Indian Army from 1987 to 2017, before retiring. When the NRC list came out he found that he had an ongoing case in the Foreigners Tribunal. He was unaware of the case, which accused him of being an illegal immigrant. The Tribunal had received a falsified confession from someone claiming to be MD Sanaullah, but signed and dated at a time when he was stationed in Manipur with the Army. The document states that he came to India "looking for a better life" and entered the country "through secret roads". His father was a freedom fighter and has land documents from 1943. 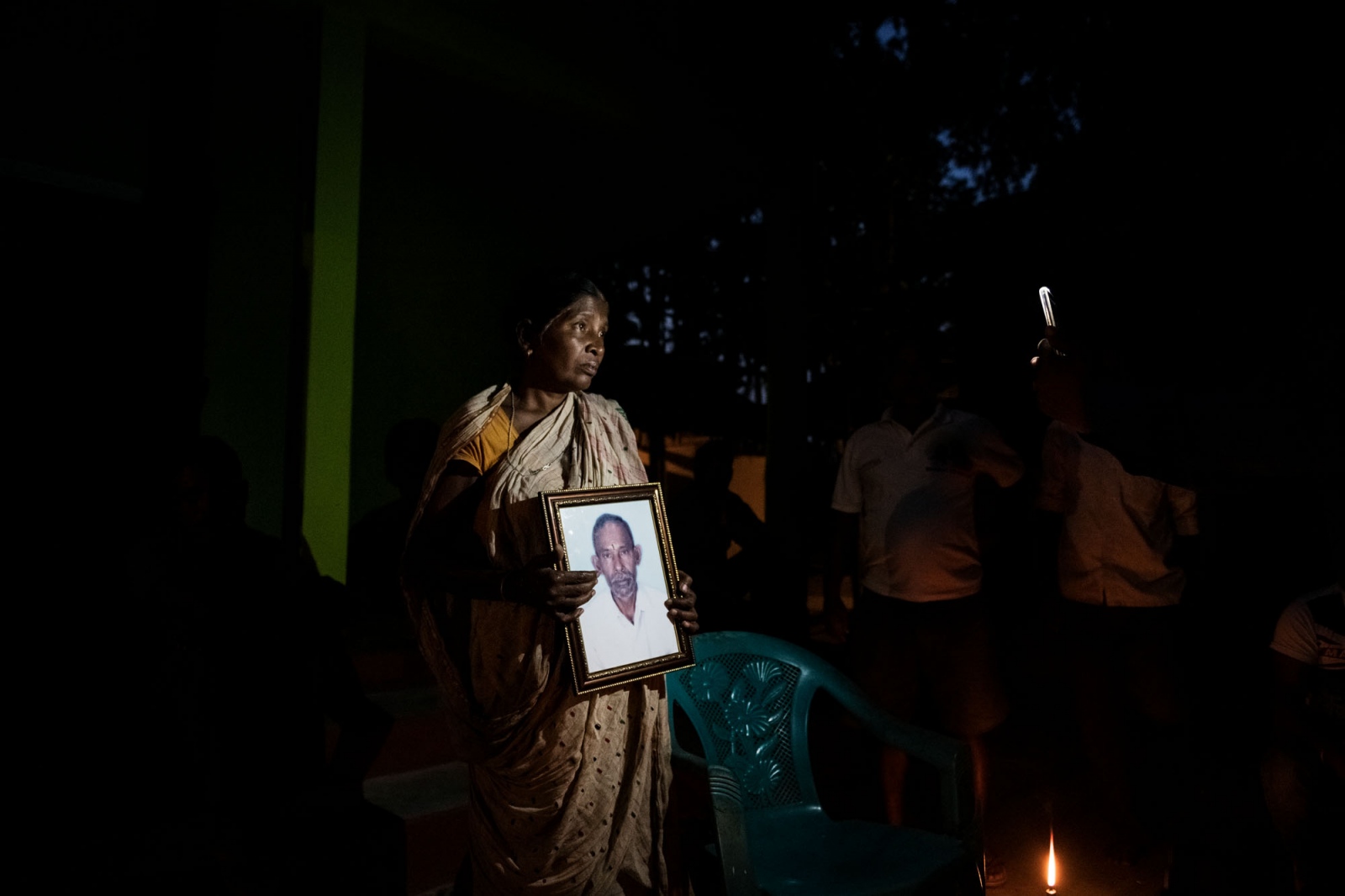 Joy Muni Das, widow of d-voter. Her husband hanged him self from a tree after he learned that their daughter was also declared a d-voter. Both him and Joy had fought their cases in court and won but was still not listed in the NRC final draft. 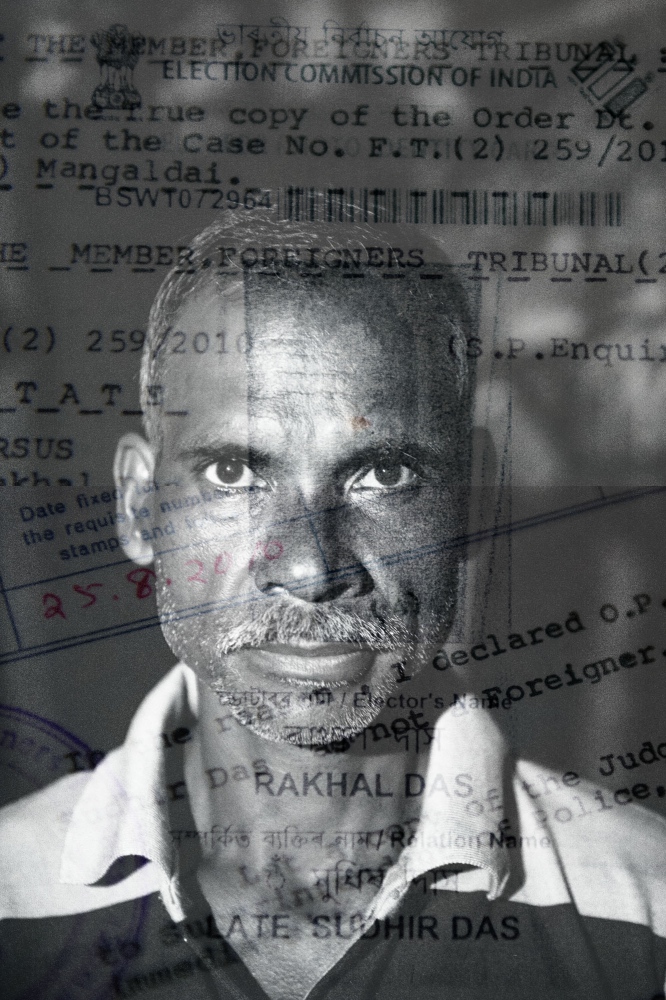 Rakhal Das, was labeled as a d-voter. He fought the case and won in the Foreigners Tribunal and was declared to be "not a foreigner". And yet, in 2018, his name was excluded in the NRC final draft list. His two sons are also not in the NRC because of their relation to a d-voter. 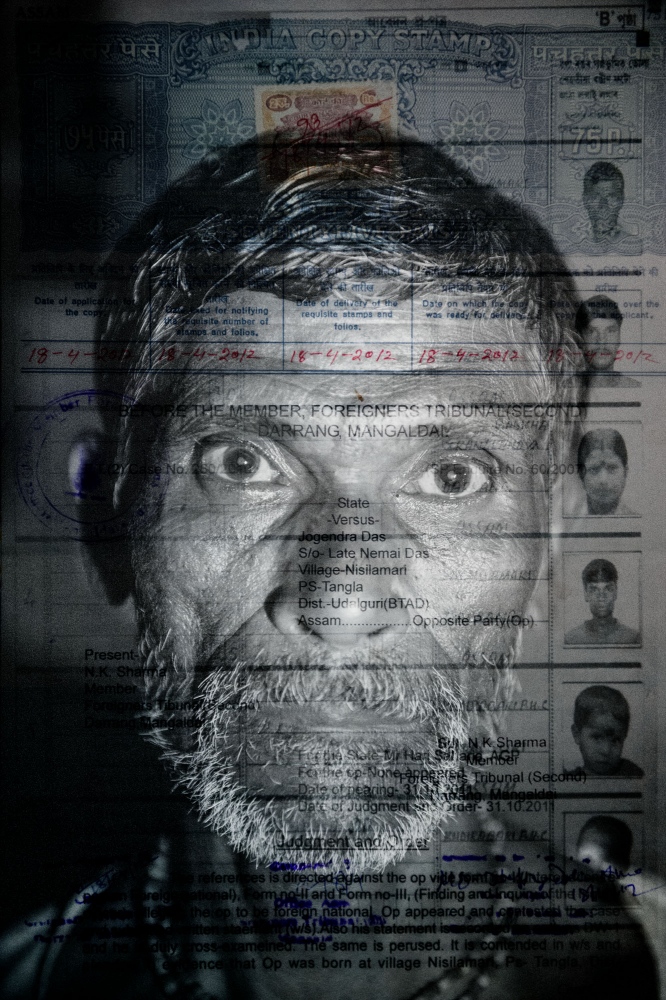 Jogendrea Das was labeled as a d-voter and now he and because of this he and his family are excluded from the NRC. He has documents proving he is Indian. 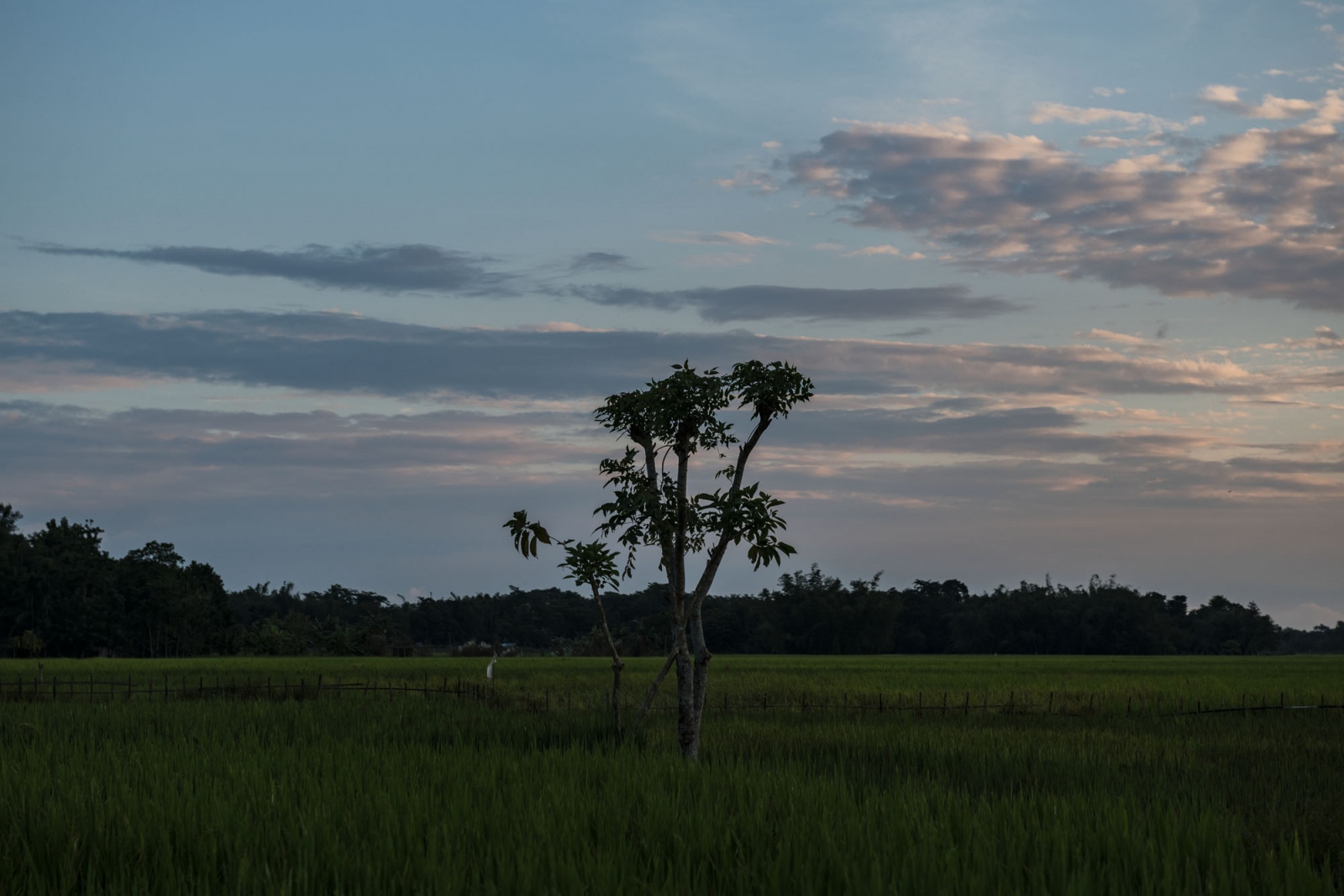 100,000s of Indians are being stripped of their citizenship. In the northeastern state of Assam, religious and linguistic discrimination is producing a new stateless minority in Asia.

The photo series for this story combines portraits with images of documents used to prove the person's identity. All the images for one portrait have been taken at the same time and location and then combined using a mixture of techniques such as blending modes and opacity in photoshop.

Copper With A Cost

The Gravediggers of Raqqa

By Vilhelm Stokstad — Death is everywhere in Raqqa . Sometimes it lurks beneath the mountains of bomb-blasted rubble and pancaked buildings. Other times it peeks out..
Dec 5, 2018

By Vilhelm Stokstad — Children of Mosul - Life after ISIS in a city of ruins.  Almost a year after the liberation of Mosul, the old city is still in ruins, dead..
Dec 5, 2018

By Vilhelm Stokstad — Kachin Youth Locked in Protracted Conflict For the young generations in Myanmar's conflict-ridden north, war controls everything. Ongoing since..
Jul 12, 2018

By Vilhelm Stokstad — Transdniestr is a predominantly Russian populated narrow strip of land on the east bank of the Dniestr River. It declared its independence from..
Jul 10, 2018

By Vilhelm Stokstad — Myanmar is the second largest producer of opium in the world, after Afghanistan, and it is the main source of Methamphetamine. Farmers and workers..
Apr 10, 2018

By Vilhelm Stokstad — In what is often called the worlds most secularized country the church is declining, with around 70 000 active dissidents each year. But a few is..
Feb 9, 2018

Out of the Shadows

By Vilhelm Stokstad — Over the last couple of months, the Burmese military has intensified its attacks on rebel groups in north and northeastern Burma. According to..
Jul 20, 2017