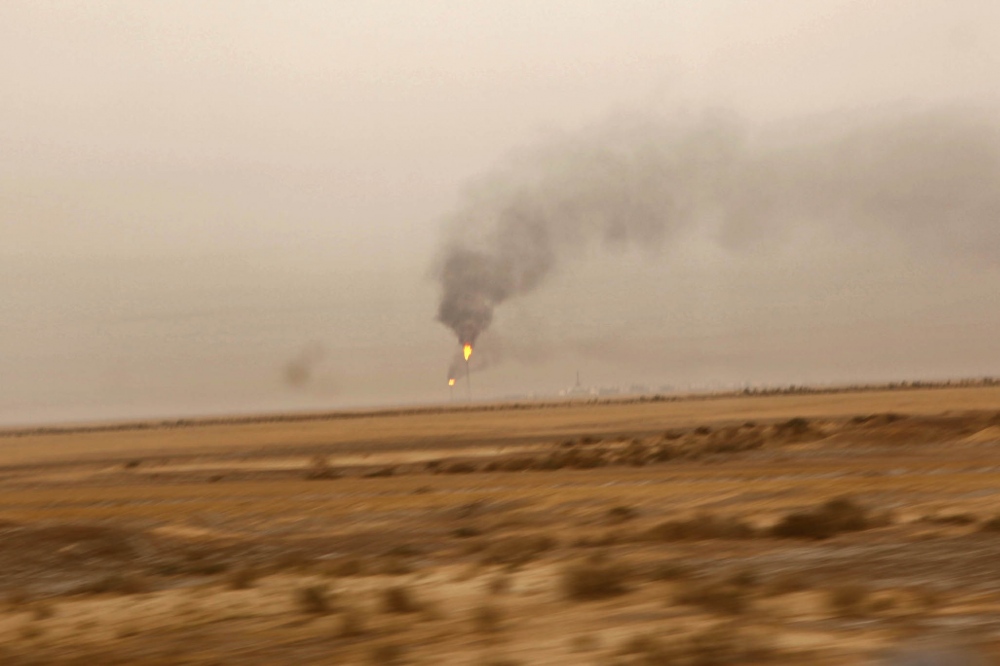 1 of 12 © 2022 Sarah Jabbari
extraction of oil in the Khuzestan province.Â 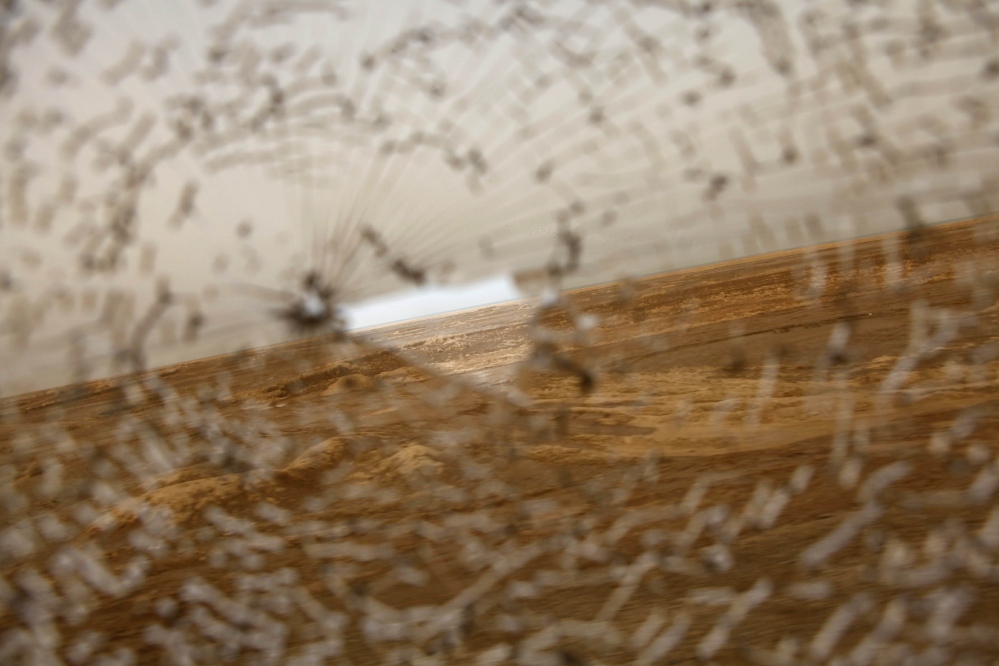 2 of 12 © 2022 Sarah Jabbari
the window of the train, after 30 years from war's end, still Khuzestan province is carrying the destructions while the oil sources of Iran are located there. leban, Syria, Iraq, and Palestine receive millions of dollars annually for their constructive programs. 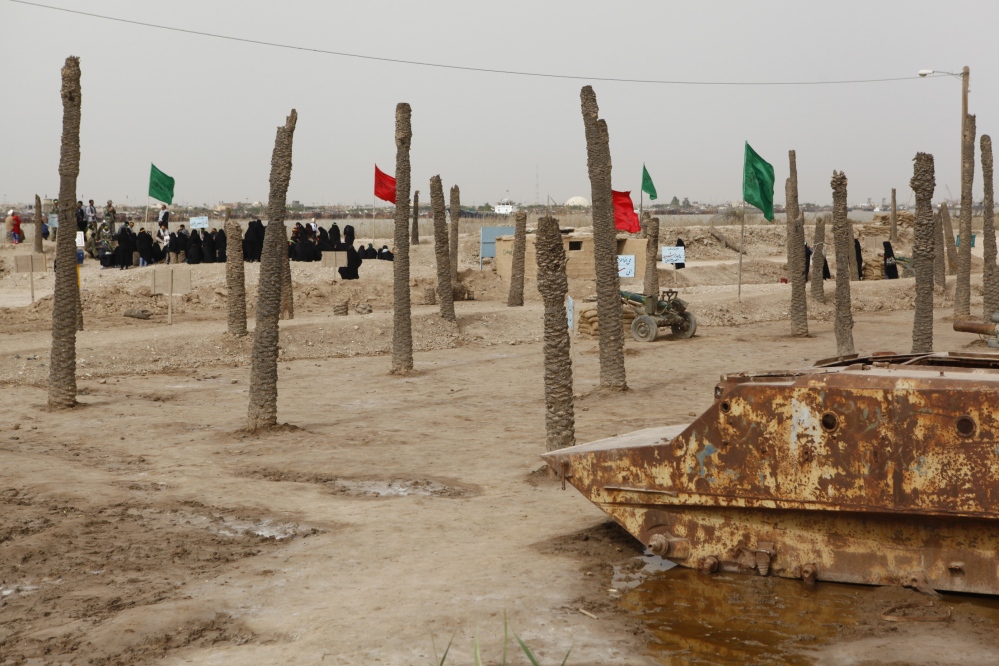 3 of 12 © 2022 Sarah Jabbari
the burnt palm trees remained from Iraq attacks to Iran. 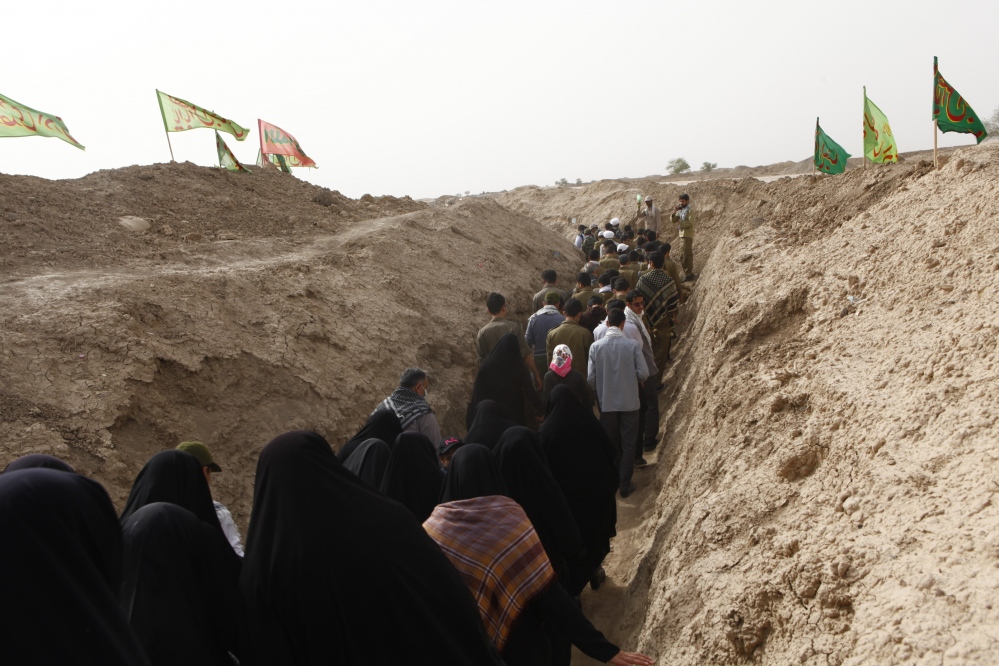 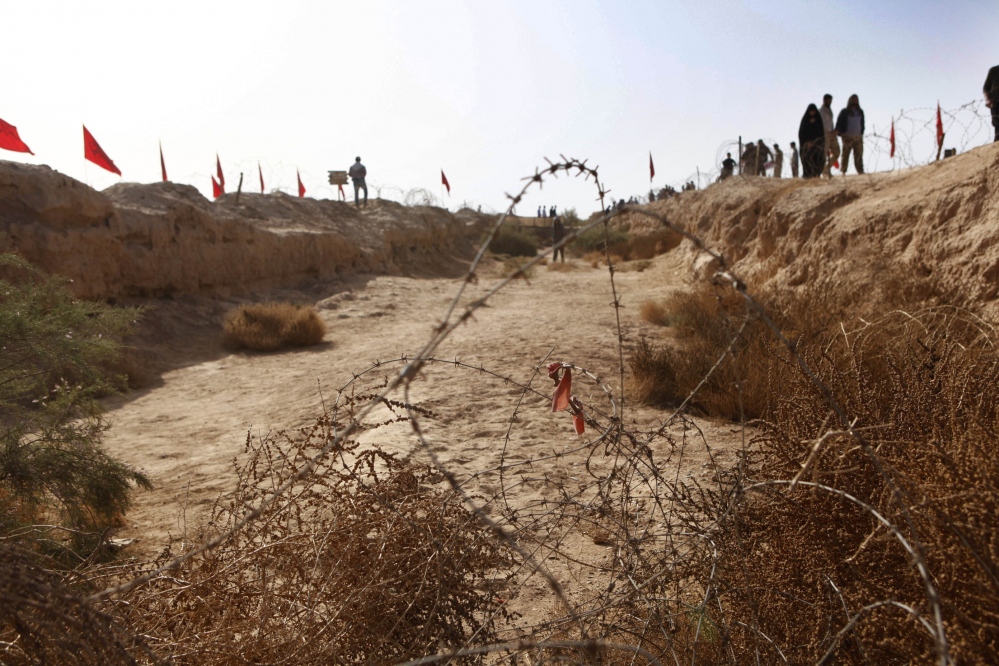 5 of 12 © 2022 Sarah Jabbari
hundreds of Iranian soldiers got stuck in this hole and after days of resistants got killed by Iraqi soldiers. 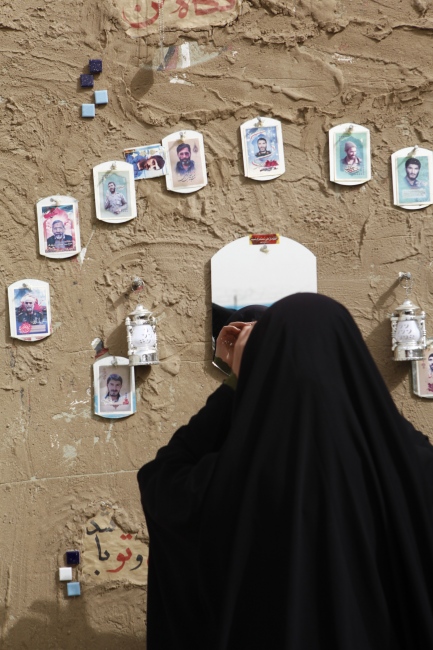 6 of 12 © 2022 Sarah Jabbari
a young Islamist girl fixes her scarf on the mirror in one of the camps serving to visitors for accommodation. the portraits of martyrs of Iran/ Iraq war have been hanged on the wall. 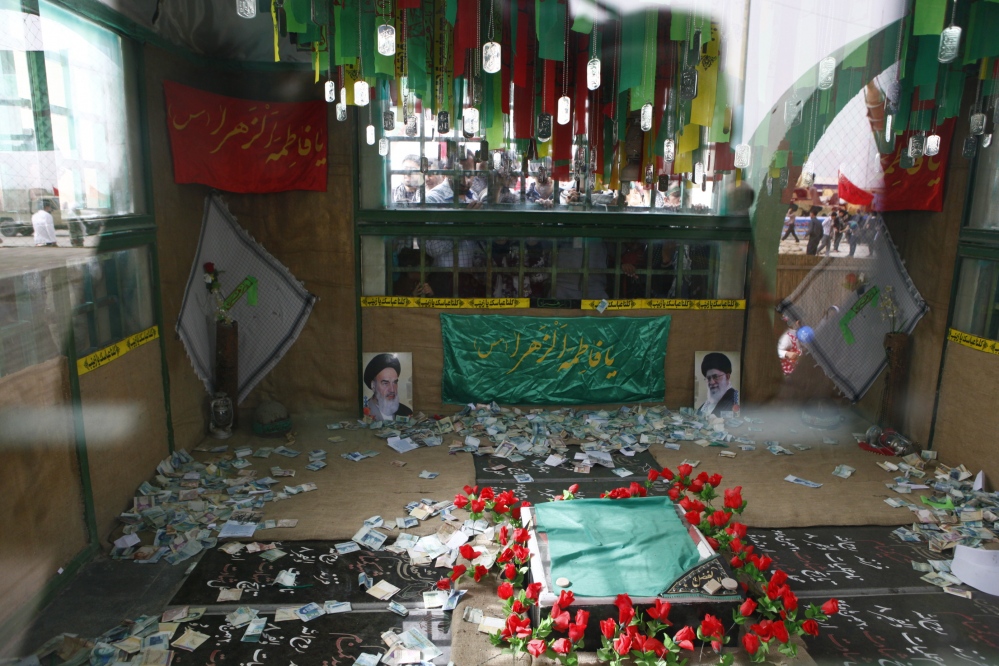 7 of 12 © 2022 Sarah Jabbari
the tomb of divers of the Iranian army who were drowned by Iraqi soldiers while they were alive with closed hands. 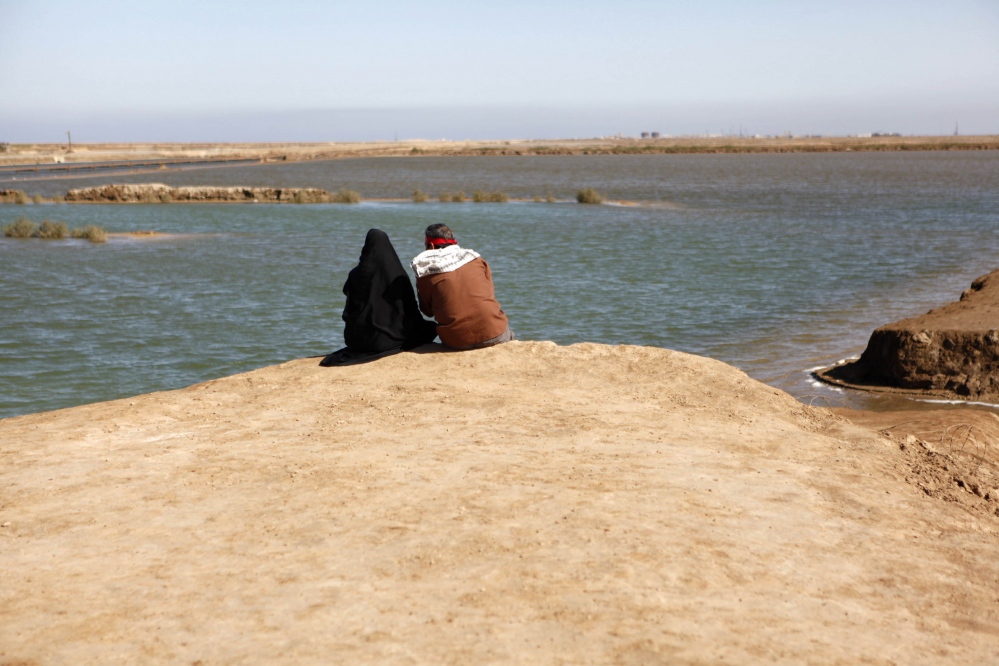 8 of 12 © 2022 Sarah Jabbari
a young Islamist couple visiting the areas once Iranian soldiers were fighting and getting killed. 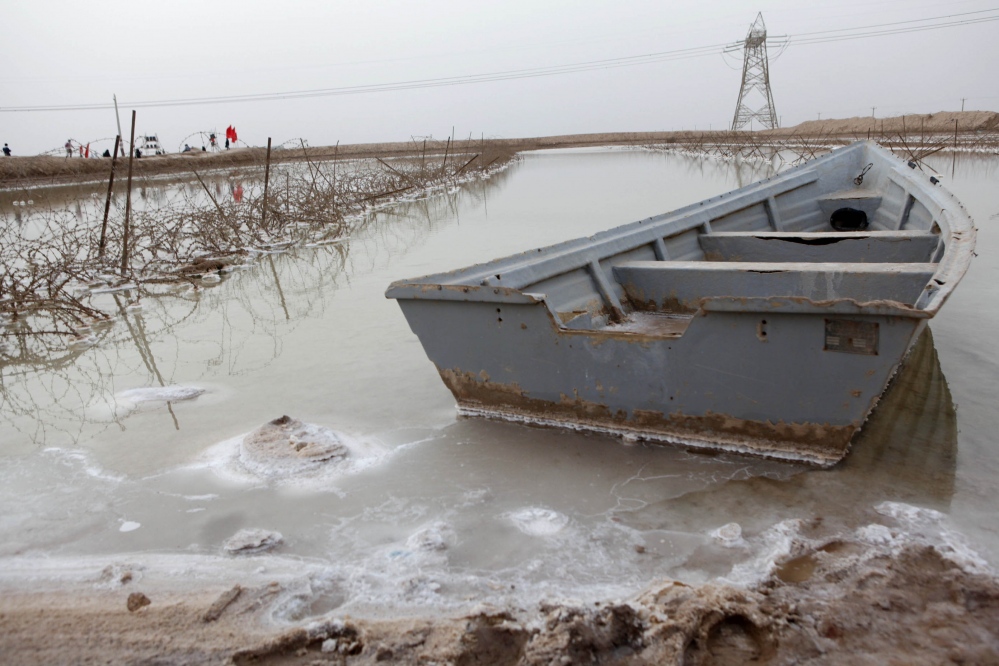 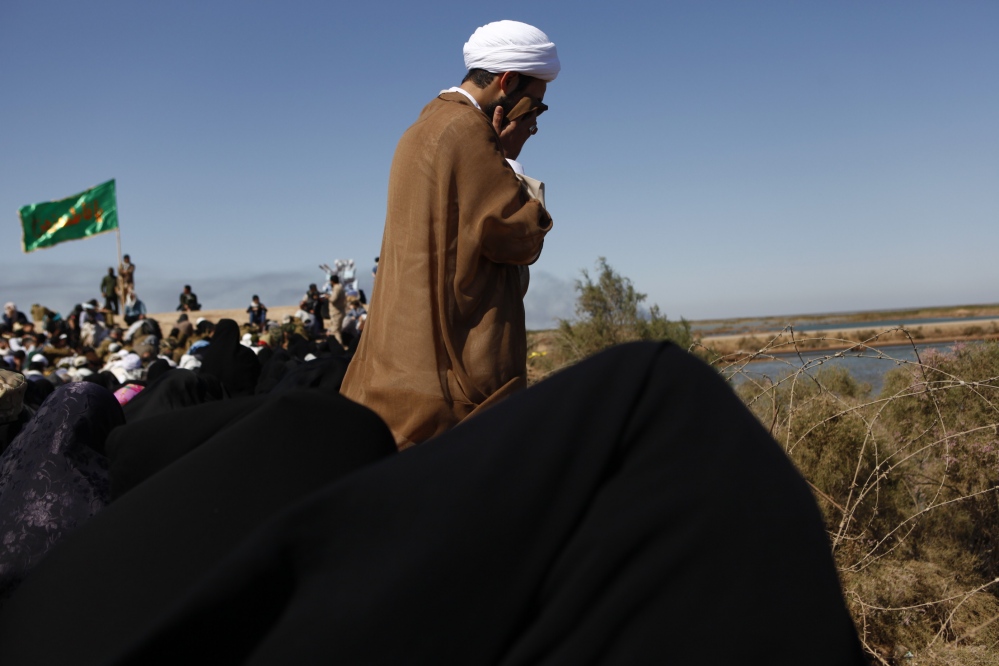 10 of 12 © 2022 Sarah Jabbari
a religious Islamist ( Mulla) cries for martyrs of Iran in the gathering of visitors. 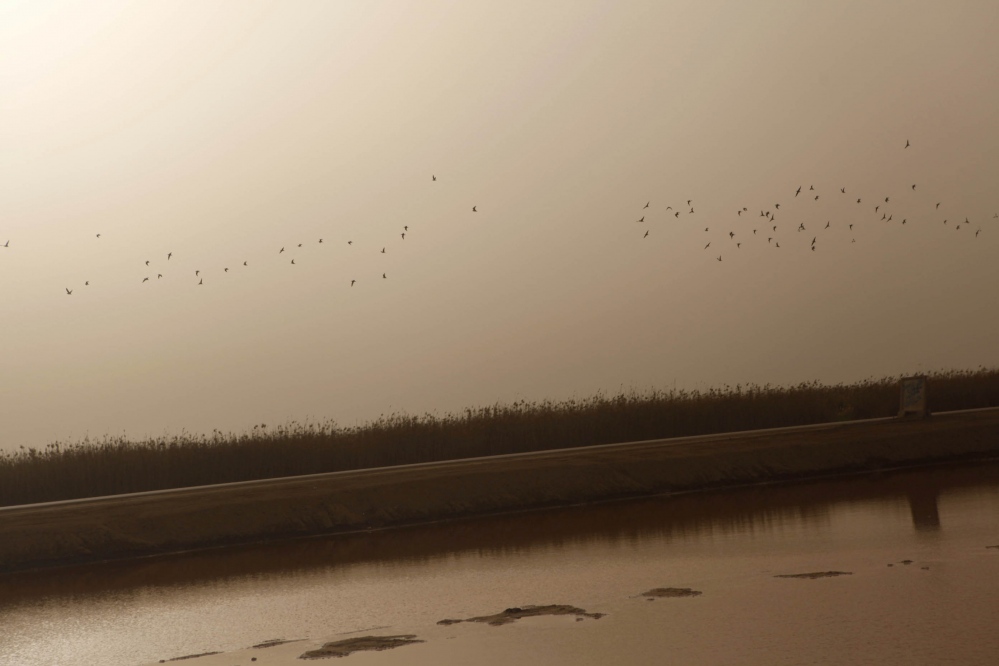 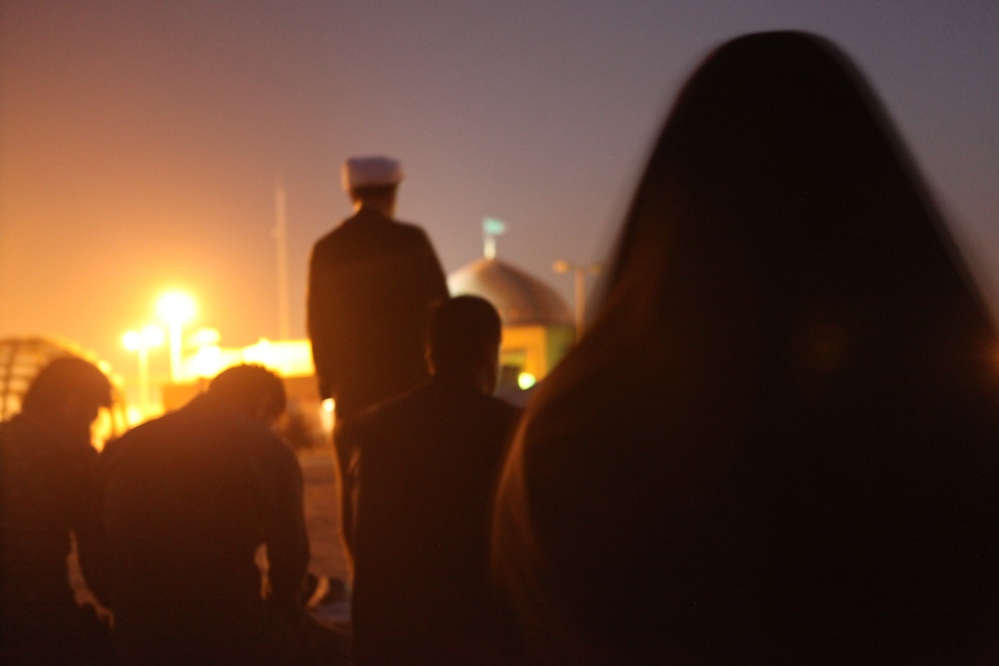 Khuzestan, is one of the provinces of Iran, maintaining Aryan civilization heritage begins with Elam period- 3000 BC, containing mark lands of Elam, Achaemenid, Parthian, and Sassanid and after Islamic period. The name Khuzestan is mentioned first time in Achaemenid inscriptions in about 500 BC.

In 1981 Iraq- which itself was part of Iran in Sassanid Empire before 7TH A.D- lunched military attack to Iran, Khuzestan in order to capture all over Iran. The Leader of Islamic Revolution of 1979 Ayatollah Khomeini, repeatedly insisted on export of Islamic revolution of Iran to other countries and that gave an excuse to Saddam Hussein to attack Iran.

Although Iraq hoped to take advantage of Iran's revolutionary chaos and attacked without formal warning, it made only limited progress into Iran and was quickly repelled; Iran regained virtually all lost territory by June 1982. For the next six years, Iran was on the offensive

The war of Iran and Iraq is the second longest war of 20th century after Vietnam War, In Iran, the war is known as the Imposed War and the Holy Defense. State media in Iraq dubbed the war Saddam's Qadisiyyah , in reference to the seventh-century Battle of al-Qādisiyyah, in which Arab warriors overcame the Sassanid Empire during the Muslim conquest of Persia.

The Persian Gulf War or Iran-Iraq war lasted for 8 years. 27 countries kept their support of Saddam to attack iran and only by sacrifice of Iranian men and women Iran could save its territorial integrity. About 200,000 Iranian lost their lives during the imposed war.

Every year a group of religious and political caravans visits zones in south and southwestern in Iran to commemorate Iranian efforts and lives lost in the Iran"“Iraq War. The caravans called Rahian-e Noor or Passengers of light consist almost of Iranian religious and revolutionary Muslims who are honored of martyrs as without their sacrifice Iran wouldn't be able to stand during 8 years of war.