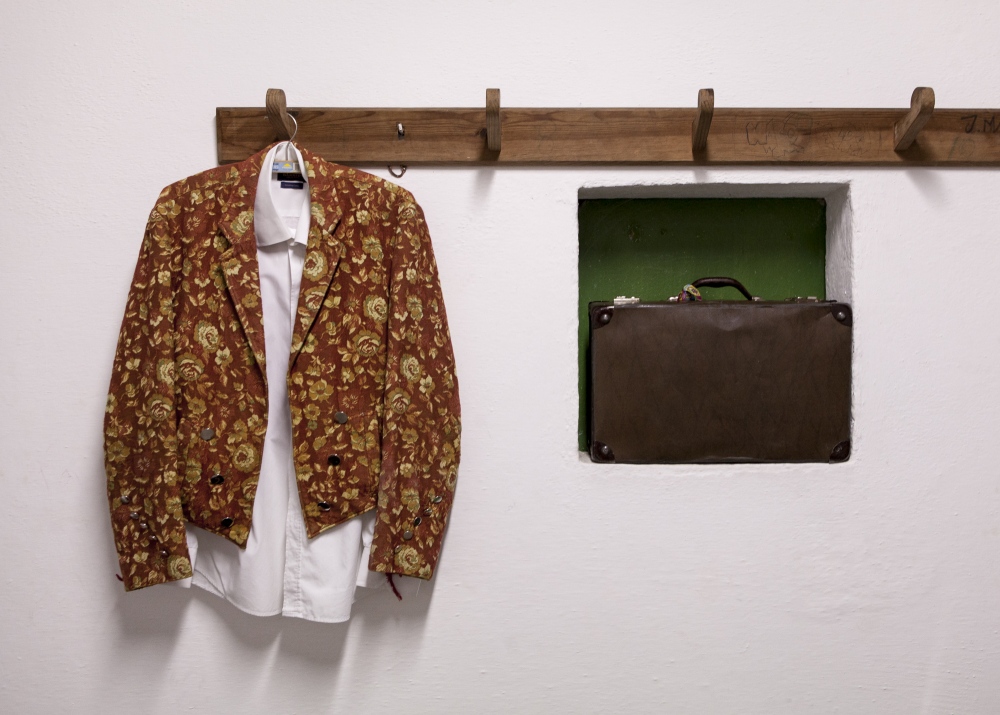 The 'jaqueta' or  forcado's jacket in the dressing room before the bullfight. The jacket distinguishes each group from a another because of the different fabrics and patterns. It is also extremely important for the forcados since it passes from generation to generation. 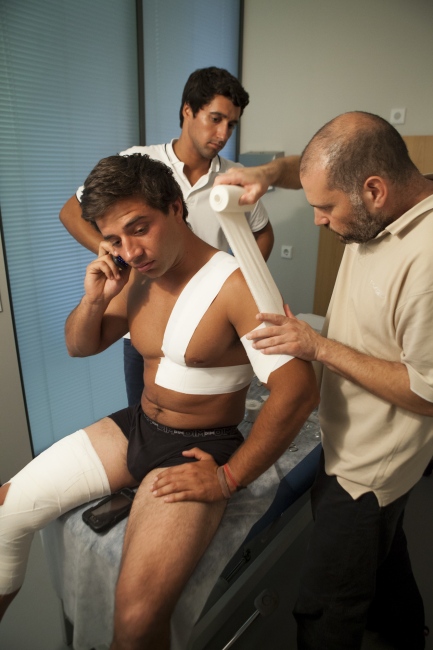 António Alfacinha, the leader of the Forcados of Évora, is assisted by a doctor before each race. Forcados tend to suffer heavily injuries and after a long career their joints must be reinforced. 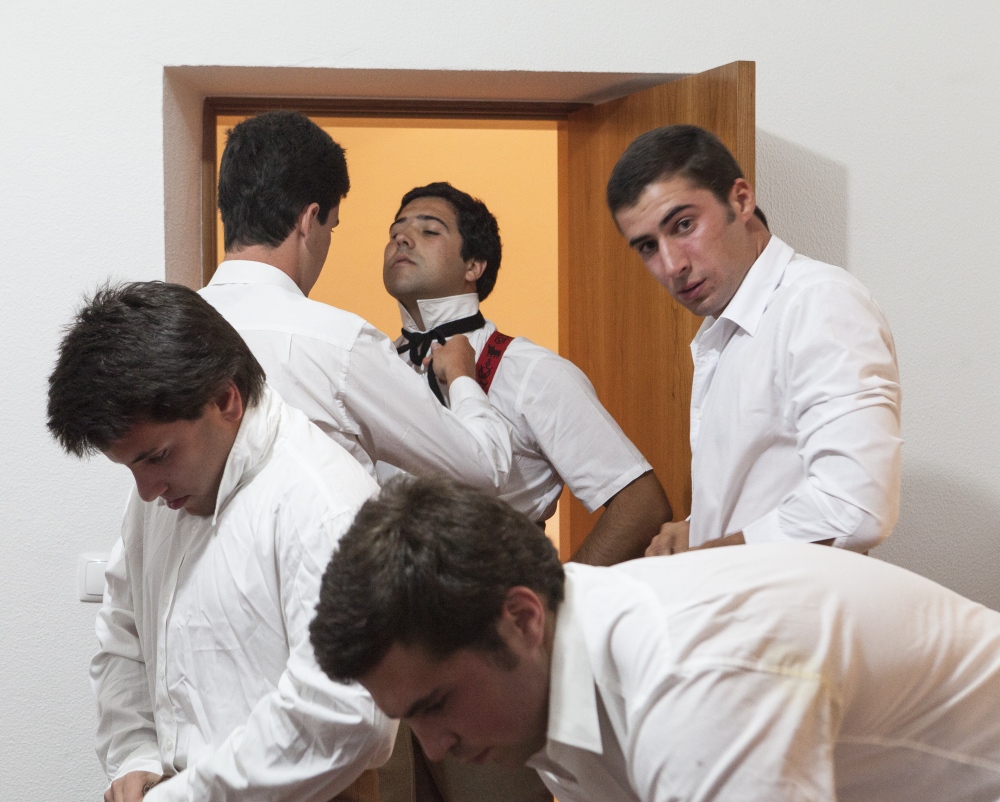 Members of the group of Forcados of Évora dress themselves in the house of an ex-forcado before the bullfight. When the arenas don’t have dressing rooms, groups use the house of friends or old members to keep the costs down. 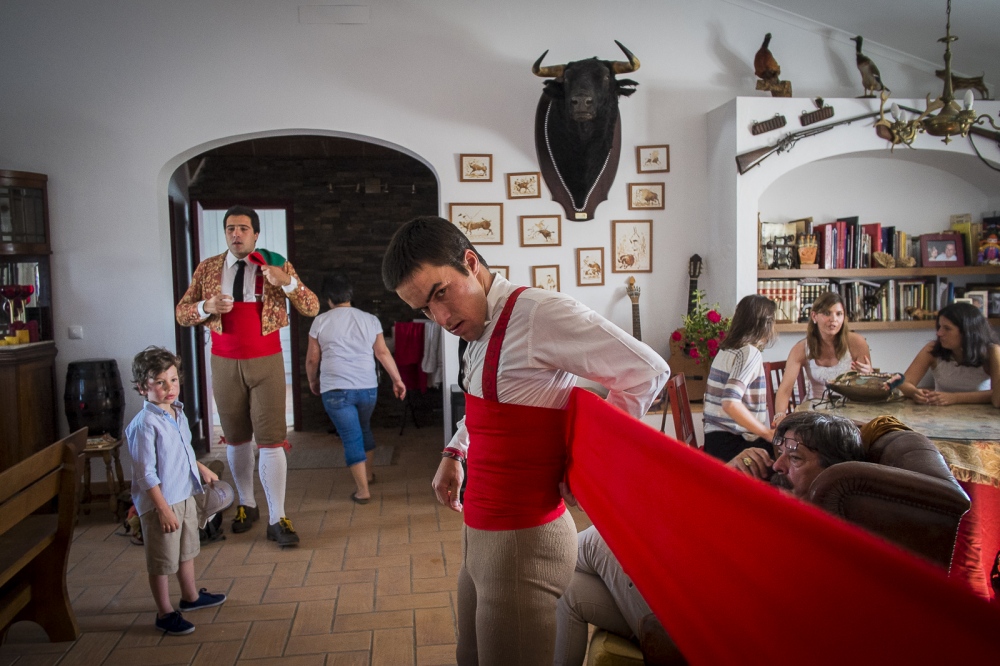 João Madeira, member of the Grupo Forcados Amadores de Évora (GFAE) puts a 5 meters red waistband protection in the house of an old member of the group before the bullfight. The waistband helps to protect their internal organs from the attack of the bull. 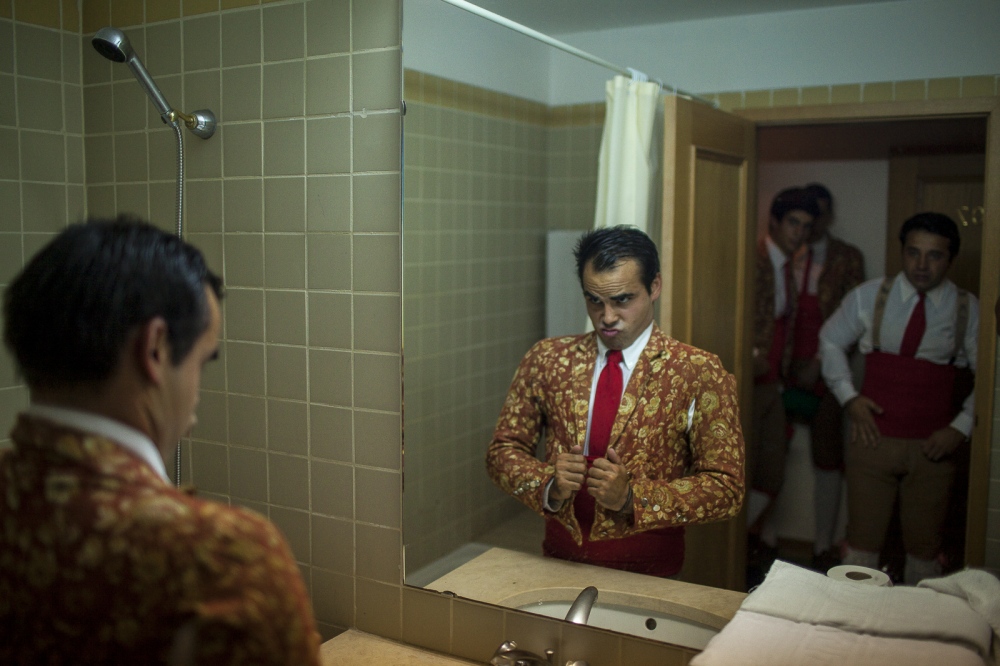 Ricardo Matxira gets ready for the bullfight in the hotel room. 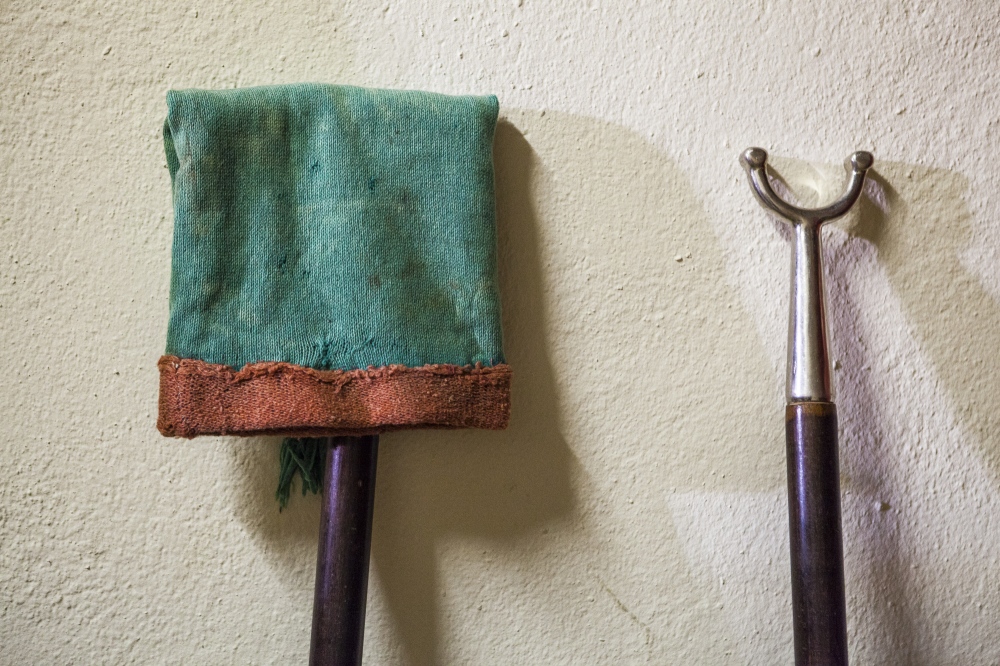 The two symbols: The hat and the forcado stick. 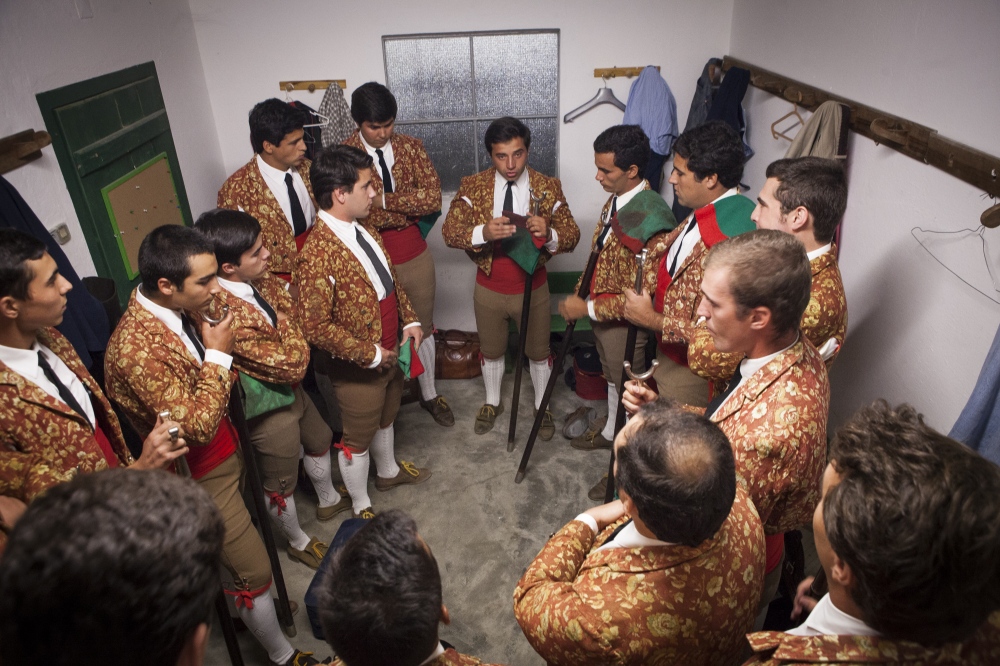 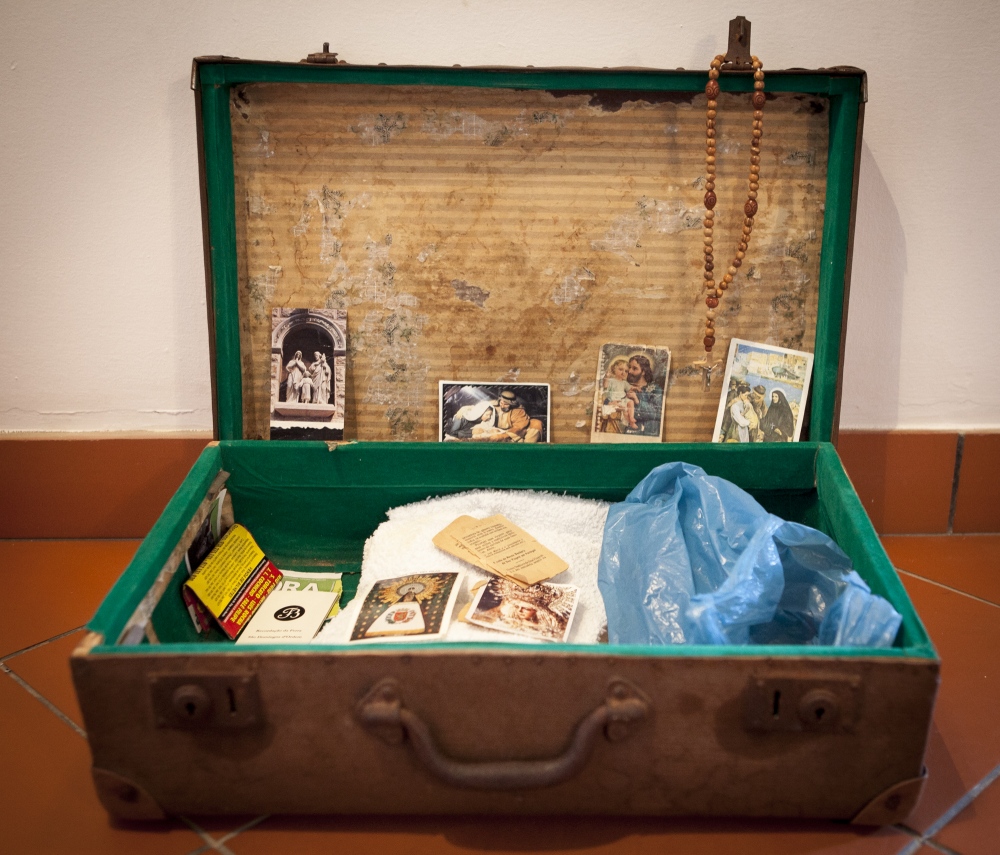 A suitcase belonging to one of the forcados. Forcados are extremely  religious. 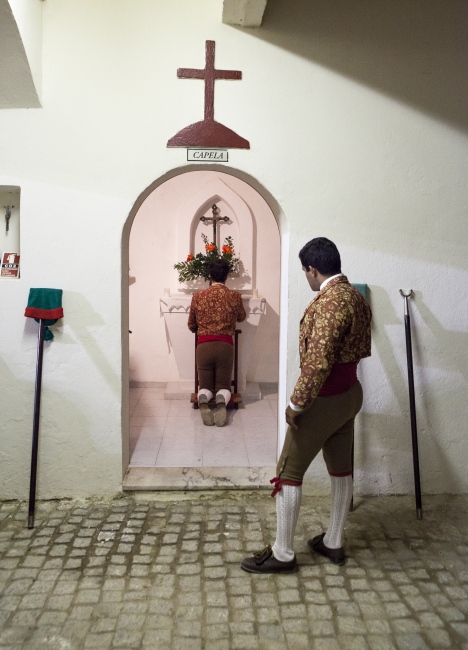 Guga Oliveira, one of the members of the group of Forcados of Évora, looks to another member of the group while he prays before the bullfight. Forcados are extremely  religious. 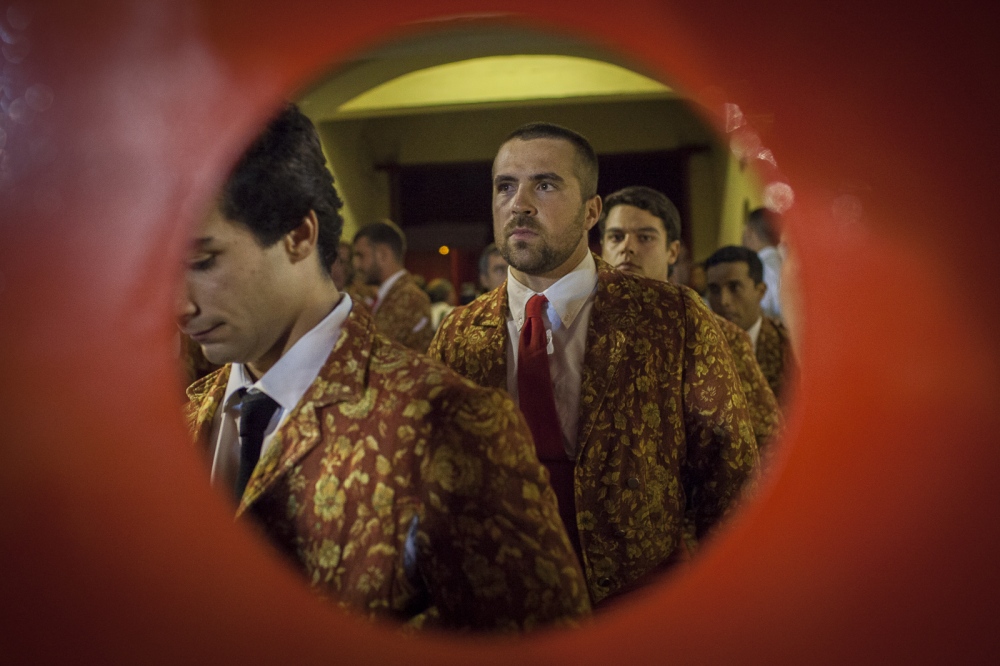 Members of Grupo Forcados Amadores de Évora entering on the Alcochete Arena before the bullfight. 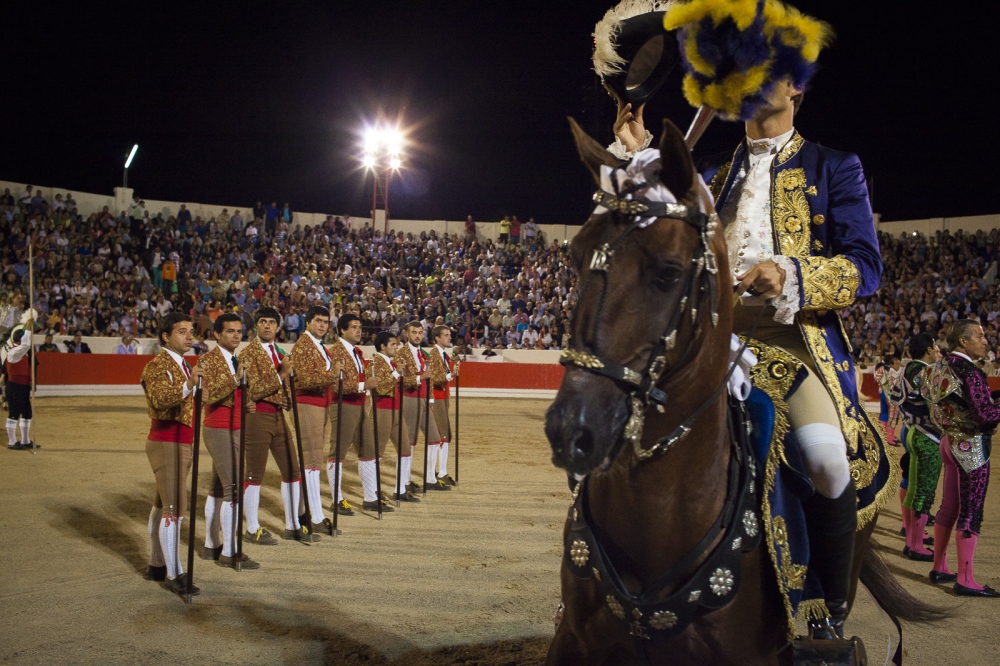 One of the horseman salutes the crowd during 'Cortesias', the ceremony that introduces the performers of the bullfight. There is a difference between the horseman and the forcados. While horseman are professionals and make €6,000 per bullfight, forcados are amateurs and make as much as €600 per bullfight for the all group which can have sometimes 40 members. 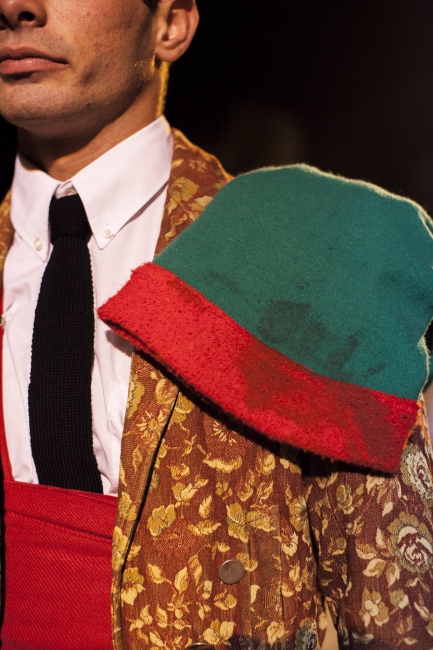 Detail of the forcado's jacket and hat. The hat is never washed, the bloodstains testify the forcados experience. 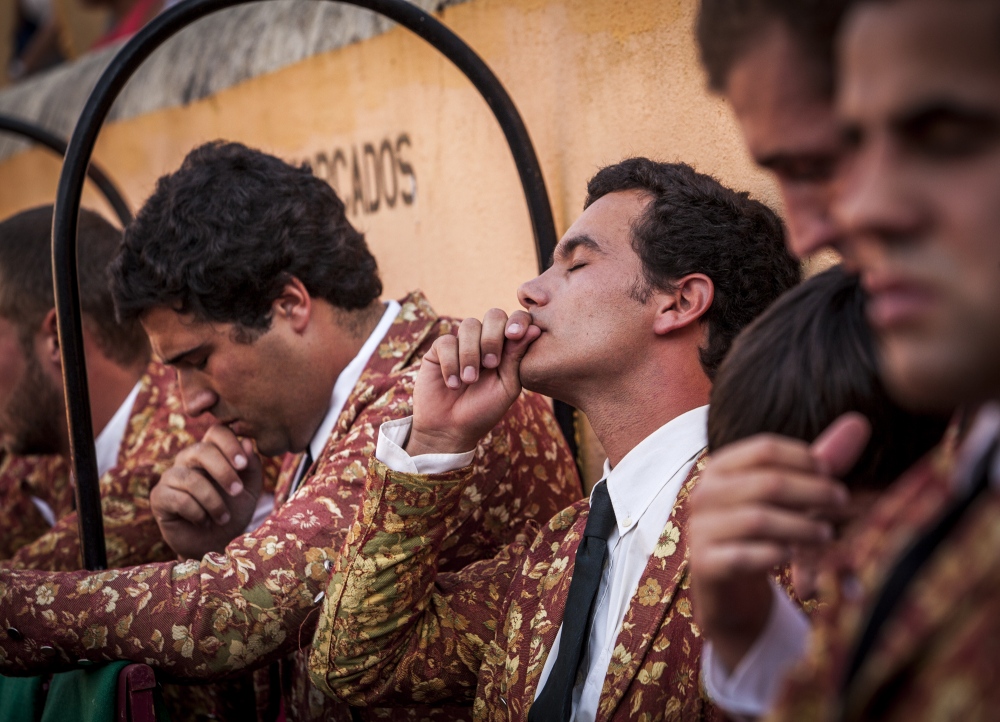 Forcados of the group of Évora perform a small blessing before their group enters the arena. Forcados are extremely religious. 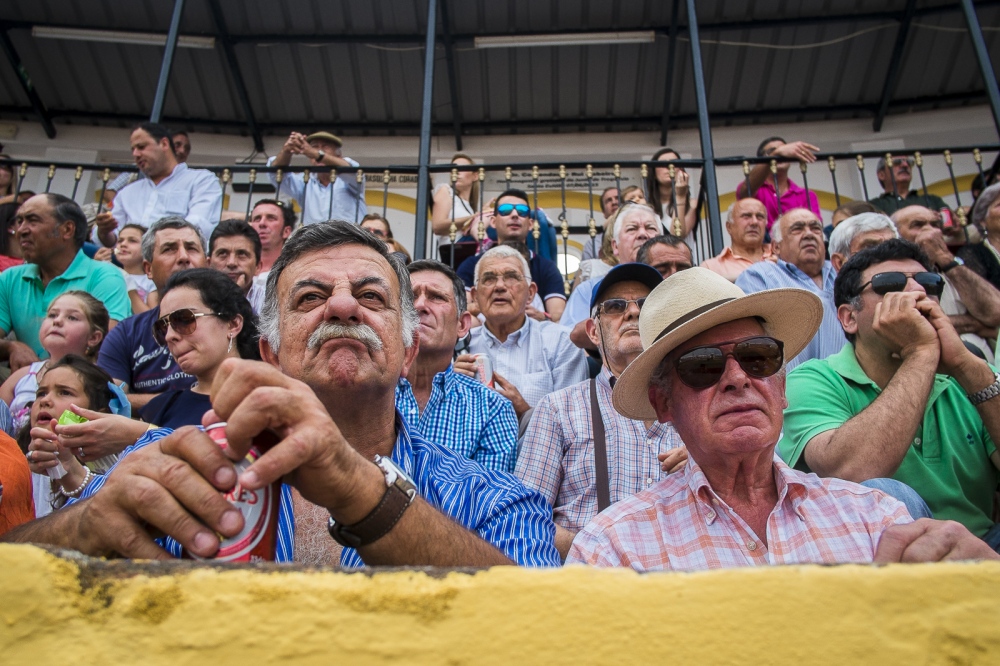 Crowd during the bullfight in Santa Eulália. 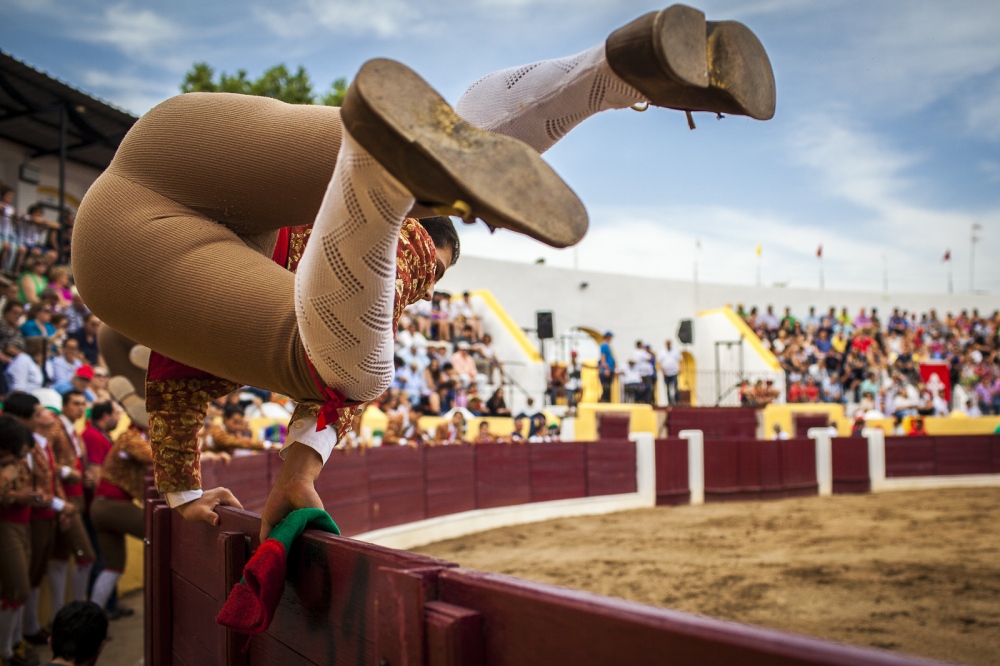 Forcado jumps the trenches to enter in the arena. They try to make it as  artistic as possible, since its one of the most important rituals before the 'pega' or head catch of the bull. Unlike in Spain, where the bull is stabbed to death if the matador manages to win the contest, the forcados wrestle the animal with their bare hands as a display of determination and bravura. 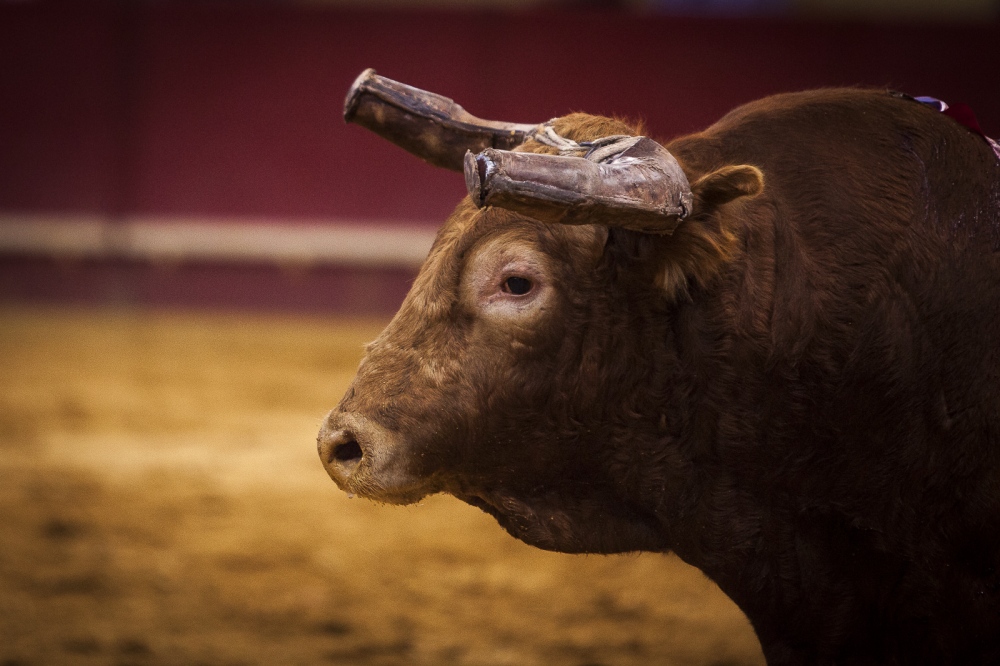 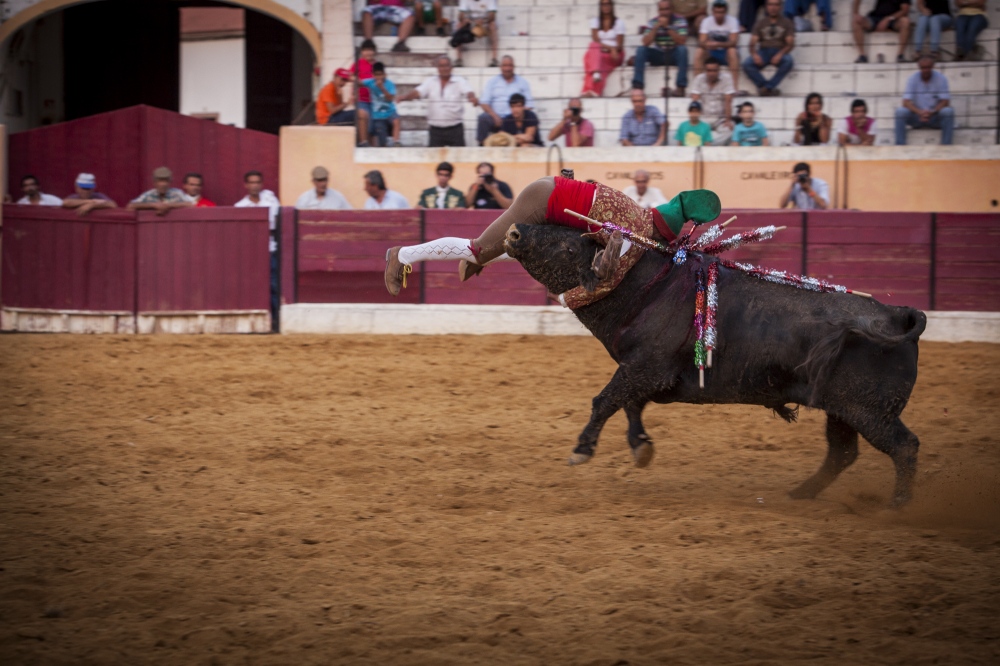 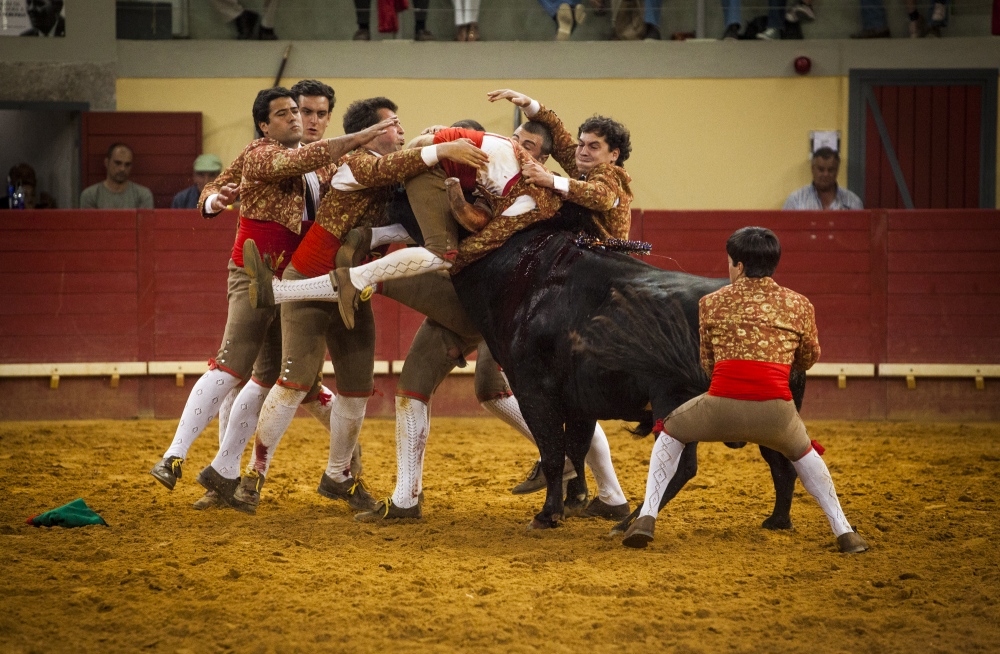 Forcado leads the bull after the face catch and is helped by the rest of the group. The forcado must be kept in the head of the bull until he stops, otherwise he has to performe another face catch. The reunion is the second part during the Forcados performance. 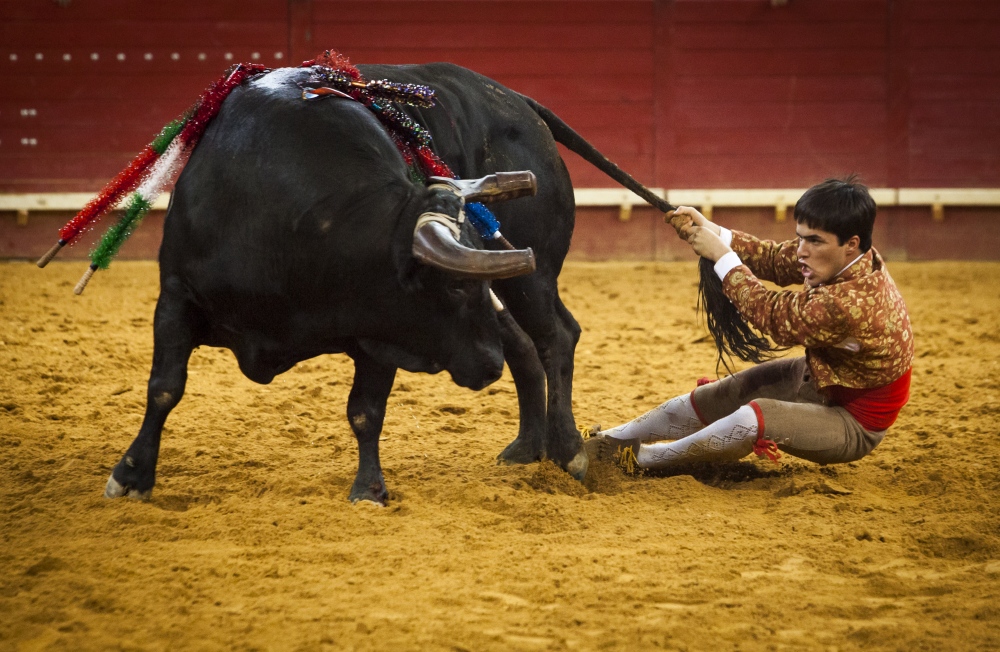 João Madeira, a member of the Forcados group of Évora, acts as the 'rabujador' pulling the tail and riding in circles with the bull. This is the third and final part of the forcados performance. 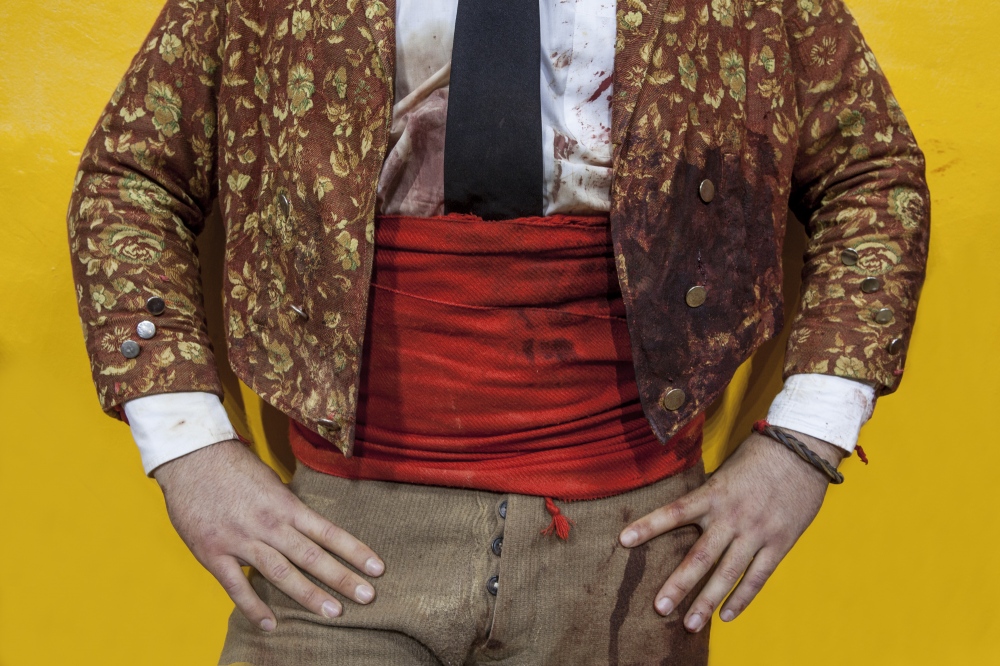 Forcado's jacket stained with blood after the face catch. The jacket distinguishes each group from a another because of the different fabrics and patterns. It is also extremely important for the forcados since it passes from generation to generation. 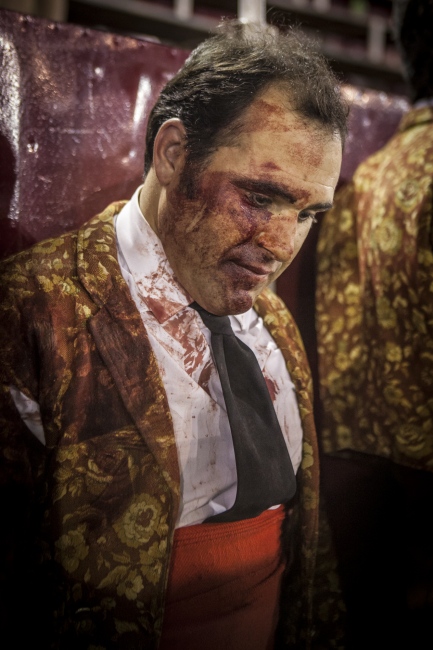 José Gomes, member of the forcados of Évora, is sad after an unsucessful performance. 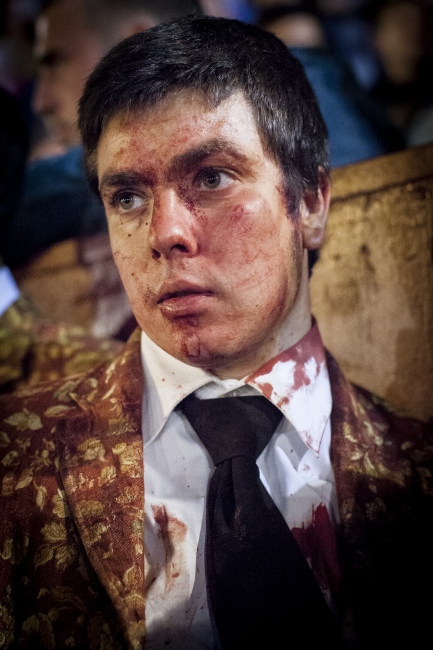 José Martins, member of the Forcados of Évora, is lost in thoughts after a difficult catch of the bull. He was only able to catch the bull after three attempts. 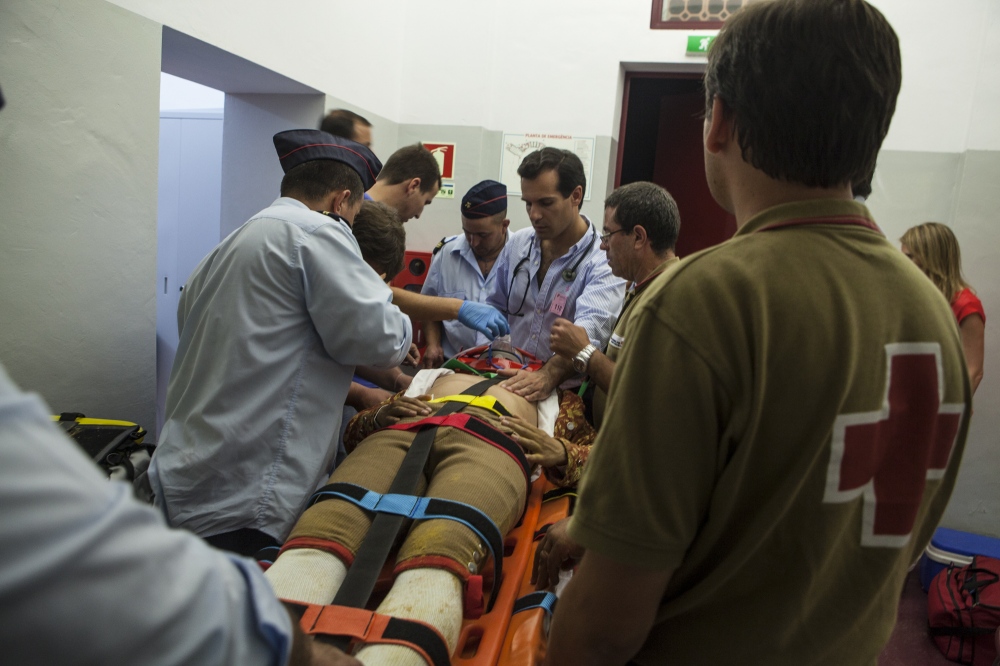 Doctors try to reanimate  a forcado after the bull thrown him to the air. Forcados get frequent injuries during their career, from broken limbs to more serious injuries like lifelong disabilities or even death. 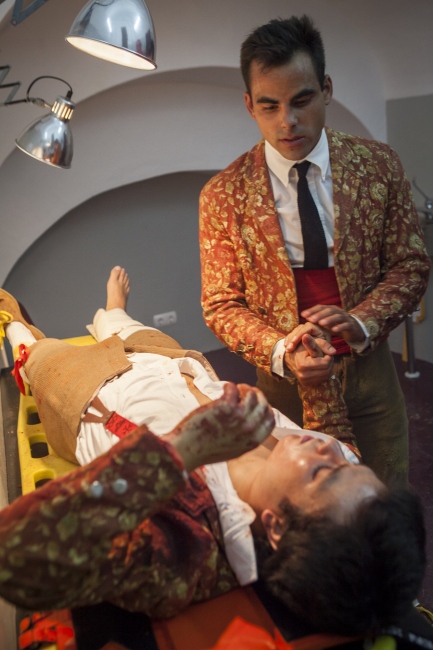 Ricardo Matxira, member of the Forcados of Évora, supports a member of the group after the broke his knee during the bullfight. Forcados get frequent injuries during their career, from broken limbs to more serious injuries like lifelong disabilities or even death. 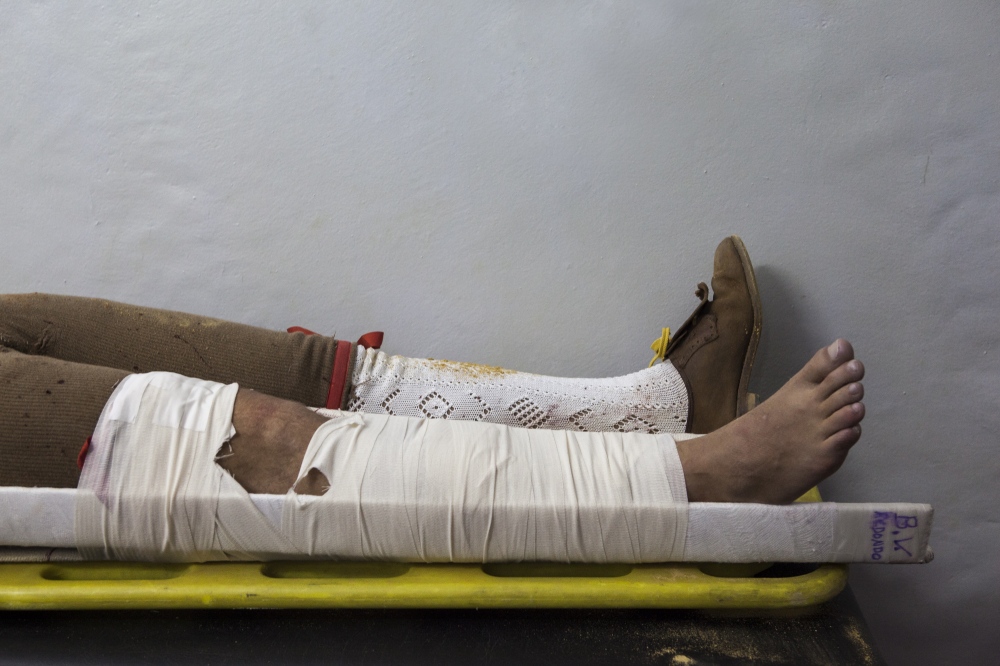 José Martins, a member of the group of Forcados of Évora, broke his leg after an attempt to wrestle the bull. Forcados get frequent injuries during their career, from broken limbs to more serious injuries like lifelong disabilities or even death. 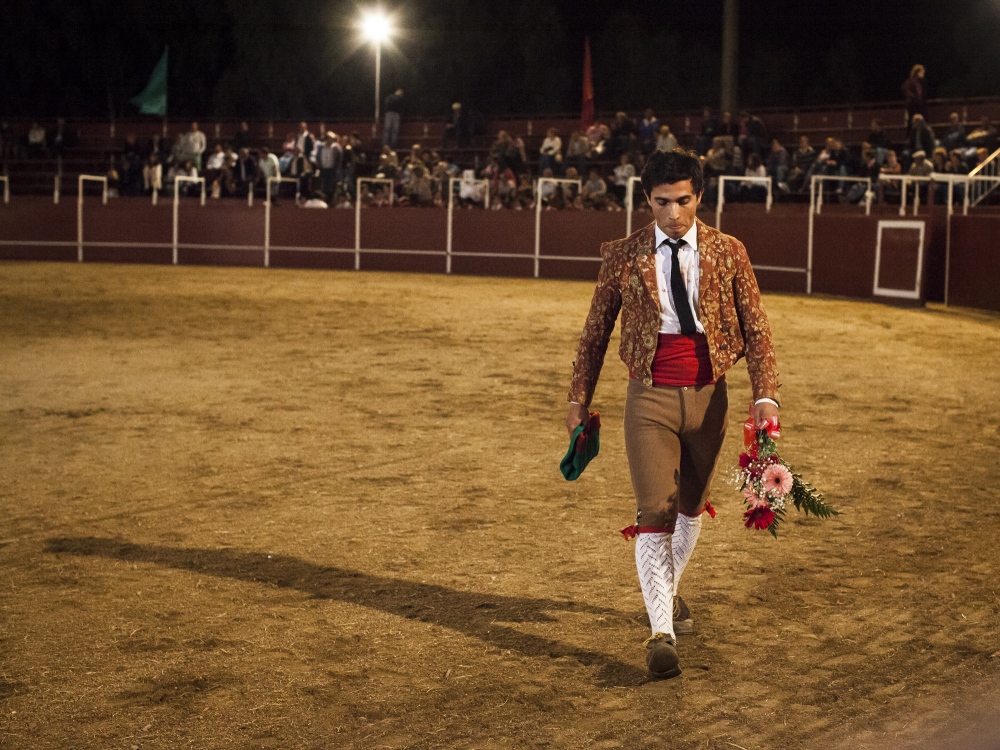 Dinis Caeiro, a member of the Forcados of Évora, leaves the arena after a successful face catch. When the pega is done at the first attempt and with style, the forcado goes around the arena to receive applauses and flowers from the public. 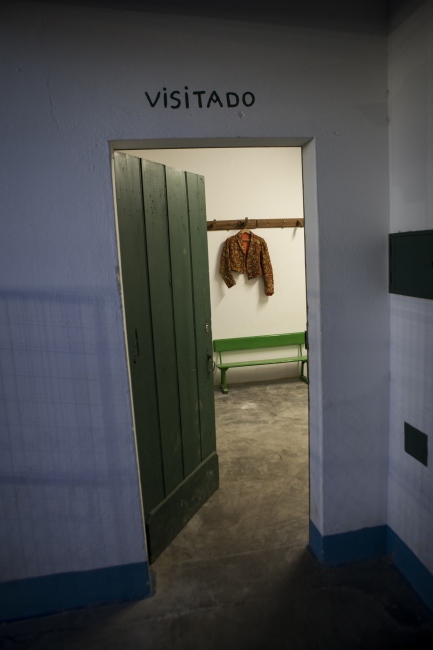 A forgotten jacket hanging in the dressing room after a bullfight.

Portuguese forcados lie somewhere between the bull riders of the Americas and the bloodier bullfighters of Spain. Unlike in Spain, where the bull is stabbed to death if the matador manages to win the contest, the forcados wrestle the animal (whose horns are capped) with their bare hands as a display of determination and bravura. The Spanish recently moved to permanently legalize deadly bullfighting (after the region of Catalonia outlawed it), but Portuguese royal law banned the killing of bulls in the arena in 1836. And while few can say the bull enjoys himself overmuch in the Portuguese arena, he does live to see another day.

Usually, a group of eight forcados challenge the bull in concert. The front man provokes the bull into a charge so that he can perform a pega de cara (a “face catch”). He secures the bull by its neck or horns and must maintain himself on the bull’s head until the other members of the group can hold the animal and enable the man to extricate himself. The team’s rabujador then holds on to the tail to finish off the performance.

The forcados are amateurs. Each team earns as little as €600 per contest, which allows them to pay for the group’s insurance and perhaps a celebratory dinner after the match. But still they do it year in and year out, because they are young men with much to prove, and a tradition to uphold.

By Eduardo Leal — India’s Kumbh Mela is considered the largest gathering of humanity on Earth. Just on the last Kumbh, that finished on Prayagraj last March, it..
May 28, 2019

By Eduardo Leal — About 15 years ago seeing women on a ring fighting Muay Thai in Thailand was almost unheard off, unless it was in a ceremonial fight in the local..
May 15, 2019

By Eduardo Leal — Every year more than 448 million tons of plastic are produced worldwide, of these between 5.3 million to 14 million tons enter the oceans, meaning..
Apr 30, 2019

By Eduardo Leal — As recently as 10 years ago, Bolivia’s indigenous Aymara and Quechua women were socially ostracized and systematically marginalized. Known as..
Jan 16, 2018

By Eduardo Leal — Every year on 24 August, faith and tradition join thousands of people at the feast of St. Bartolomeu do Mar, for an unusual ritual that mixes the..
Dec 1, 2017

By Eduardo Leal — At the end of June 2011, I arrived in Caracas, the capital of the Bolivarian Republic of Venezuela with the objective to cover the celebrations of..
Oct 7, 2017

By Eduardo Leal — Countries like the United States and the UK are trying to integrate elections seamlessly into daily life—you can vote by mail as if you were..
Nov 30, 2016

By Eduardo Leal — Even if football was born in England, Brazil is considered the spiritual home of the game. During a month, from the 12th June 2014, the world will..
Nov 30, 2016

By Eduardo Leal — Travis Dupree comes from Eastman, a small town in central Georgia. He played basketball at Voorhees College in South Carolina but after graduation..
Nov 30, 2016

By Eduardo Leal — The soybean will in a few years become one of the most important food commodities on earth. No other fruit is produced with comparable..
Nov 30, 2016

By Eduardo Leal — Surrounded by sand and lagoons in Lençois do Maranhão National Park, an area that stretches 155 thousand hectares on the State of Maranhão in..
Nov 30, 2016

By Eduardo Leal — Every Sunday afternoon on the city of El Alto, once merely suburb of the city of La Paz situated at 4,150 meter high, hundreds of Bolivians and..
Nov 16, 2016

By Eduardo Leal — The world consumes 1 million every minute, it was considered by Guinness World Book of Records as “the most ubiquitous consumer item in the..
Nov 16, 2016

By Eduardo Leal — Colombia’s armed conflict, which started in the 1960’s, might be close to an end. After almost four years of negotiations between the Colombian..
Jul 14, 2016

By Eduardo Leal — Linked to the celebration of the harvest and the arrival of the rains in the La Paz region, the Alasitas Festival is the feast of the dreams for..
May 16, 2016