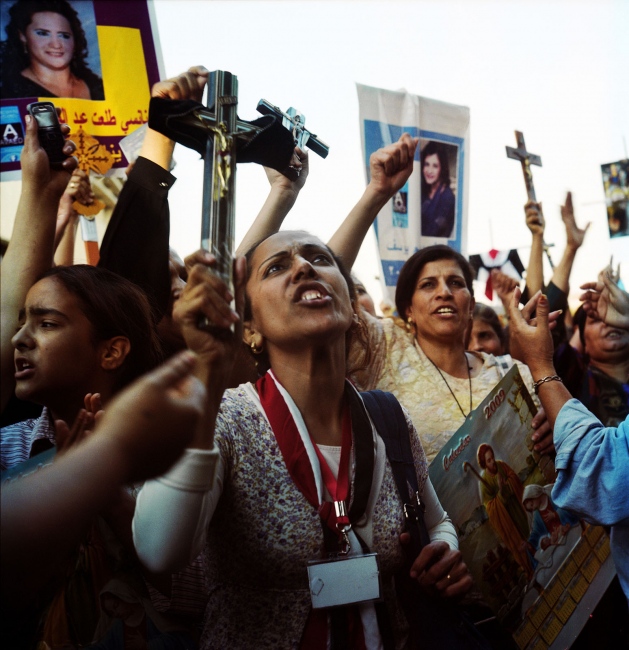 1 of 26 © 2020 Rena Effendi
Copts protesting in front of the Maspero TV building in downtown Cairo following the May 7 - 8, 2011 sectarian violence and burning of St. Mina church in Imbaba neighborhood of Cairo, which left 12 dead and 232 injured in Cairo. 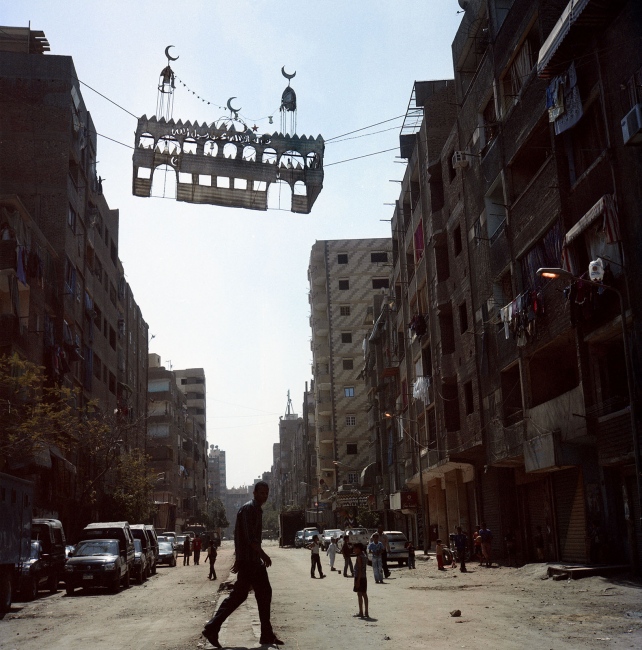 2 of 26 © 2020 Rena Effendi
Imbaba's Luxor street cordoned off by the army with limited access for local residents in the aftermath of sectarian violence that took place on May 7 - 8, 2011 in Cairo. 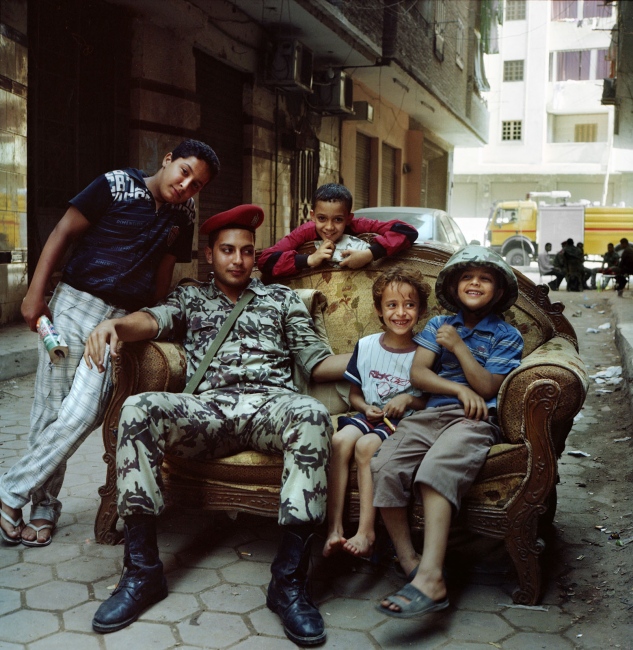 3 of 26 © 2020 Rena Effendi
An army soldier guarding a side alley of Luxor street in Imbaba, where the sectarian violence and burning of St. Mina church took place on May 7 - 8, 2011 in Cairo. 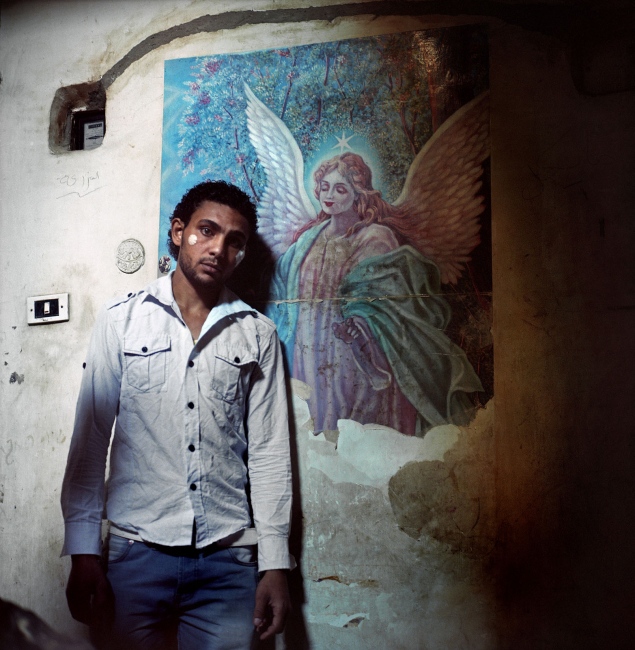 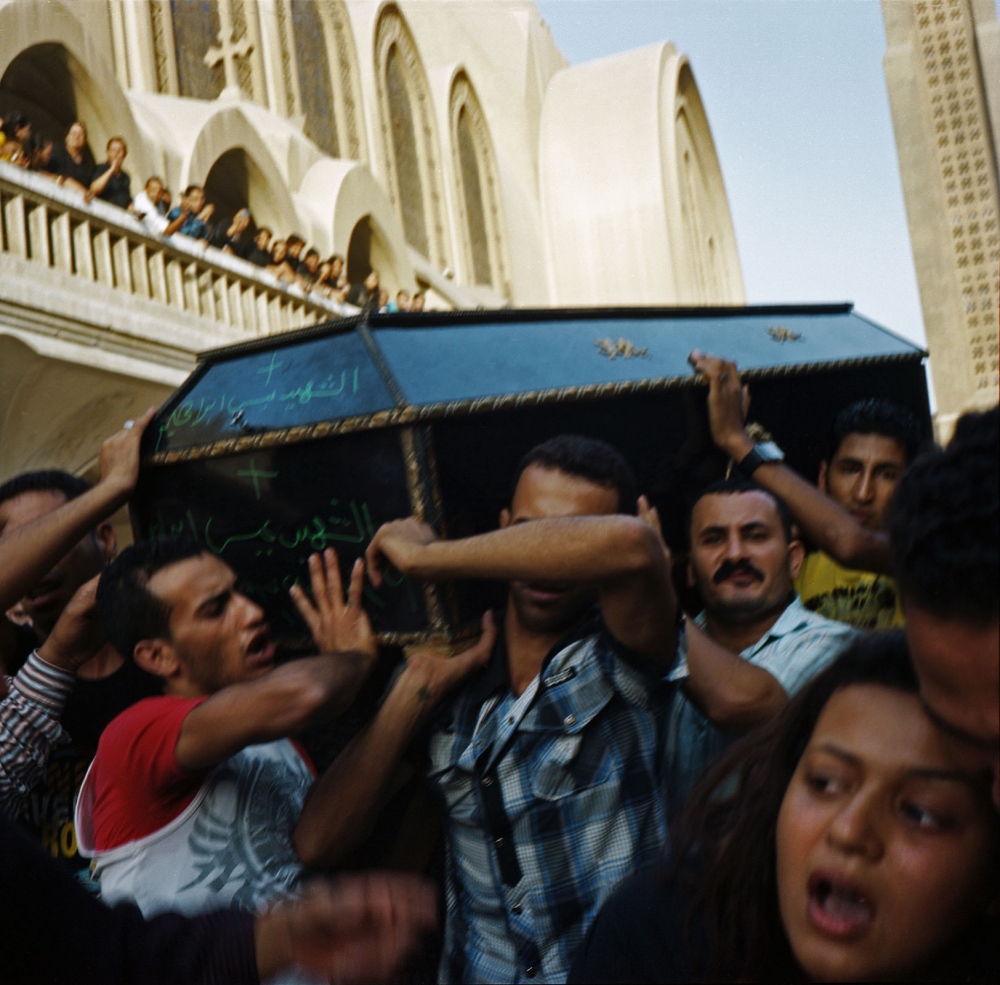 5 of 26 © 2020 Rena Effendi
Relatives of victims carrying coffins out of the Abasseya Cathedral to be buried following the violence that took place in front of Maspero TV building on October 9 - 10, 2011 resulting in 28 mostly Coptic deaths and 212 injured. The clashes occurred between Copts demonstrating peacefully against an attack on a church in Upper Egypt and the Egyptian Army and security forces. The Coptic demonstration was violently dispersed by tanks and armored vehicles, as well as random shooting in the crowd the night of October 9 - 10, 2011. 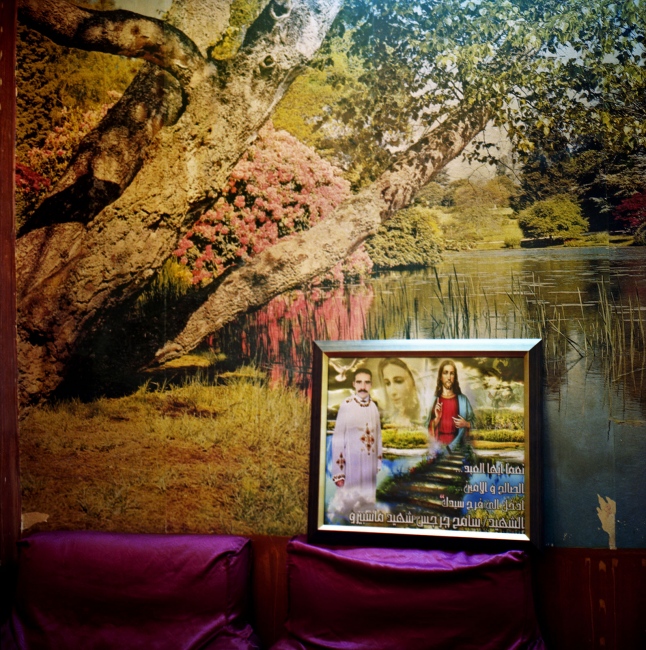 6 of 26 © 2020 Rena Effendi
Portrait of Samah Girgiz, 30 y.o. wall painter from Sohag, upper Egypt, who was killed in front of Maspero TV station on October 9, 2011 during violent clashes with the army and security forces. "But we will continue our fight. We can’t just disappear - there are 12 million of us!" – Samah’s brother Rami Girgiz says. 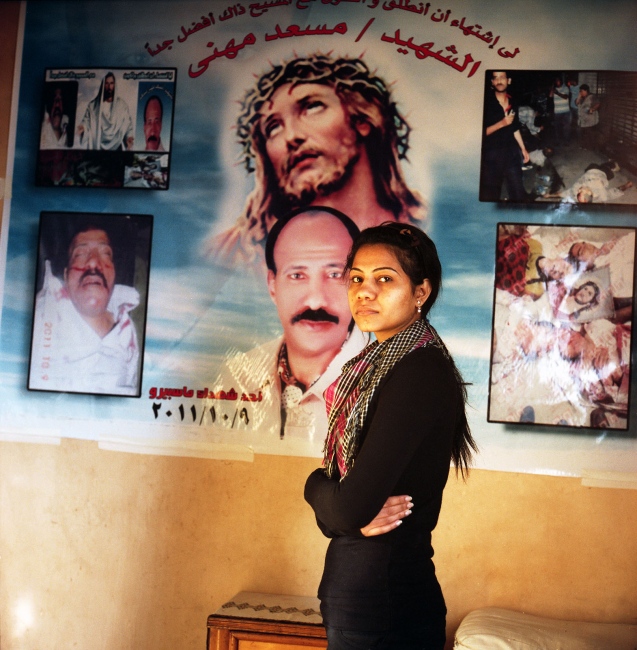 7 of 26 © 2020 Rena Effendi
Mariam Musaad, daughter of Musaad Mohani in front of the collage on the wall showing her father's body as it was brought to the Coptic Hospital morgue on October 9, 2011 following the clashes of civilians with the army in front of the Maspero TV building. The photographs and posters showing her father as a martyr have become a permanent memorial installation in Mariam's home in Shobra district of Cairo. 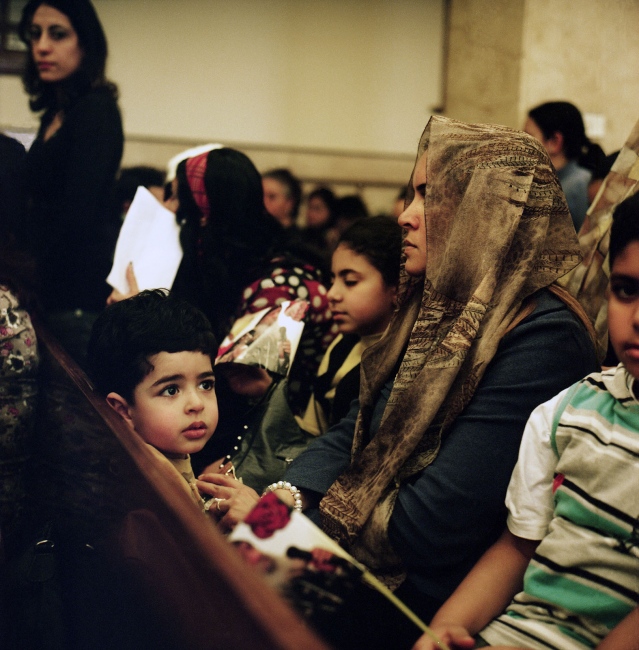 8 of 26 © 2020 Rena Effendi
People attending mass at the Coptic Orthodox Church of Saint Mark and Pope Peter in Sidi Bishr, Alexandria which was the target of the January 1, 2011 bombing that took lives of 23 Copts and injured 97 in Alexandria. 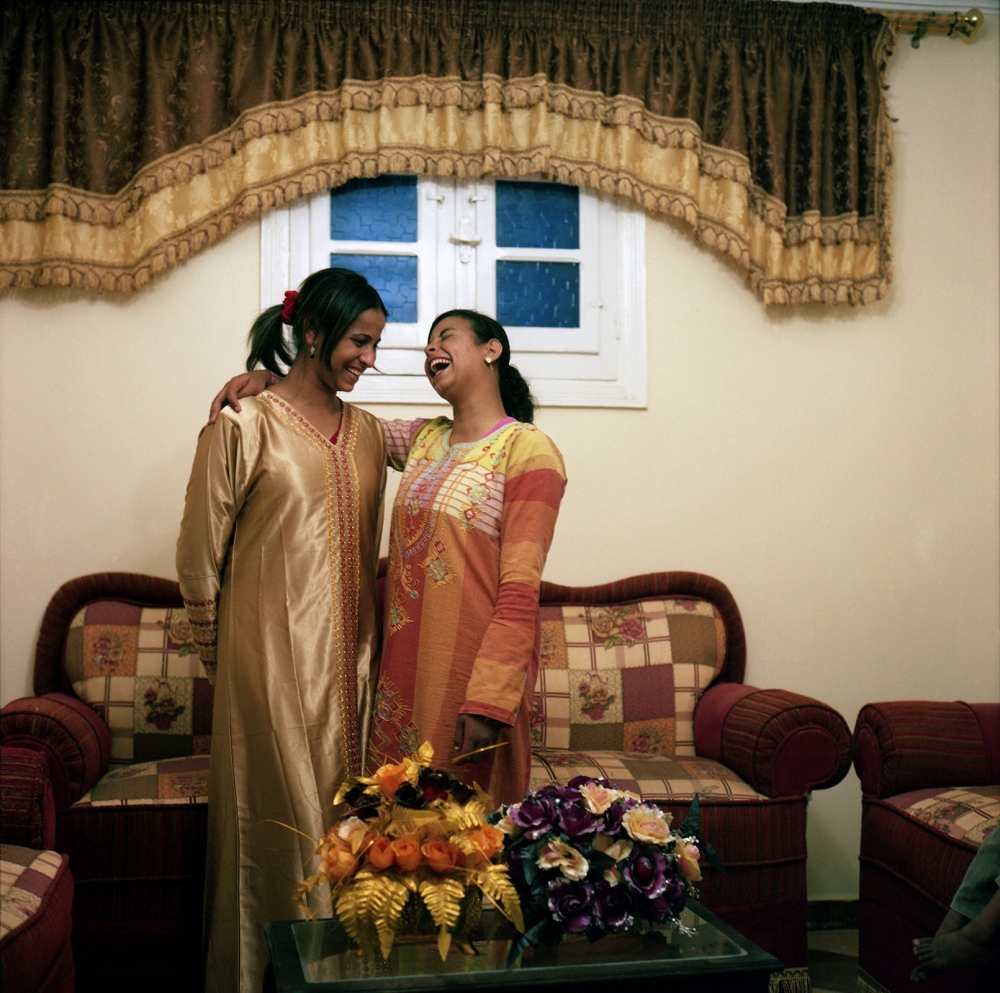 9 of 26 © 2020 Rena Effendi
Sisters Marina and Mary, at Marina's newly wed home on Geziret-Ed-Dahab island home to many coptic families. "Some women give birth on the island, there is a midwife that goes around homes. I was almost born here, my mother thought she'd give birth to me on the boat!" Marina said. 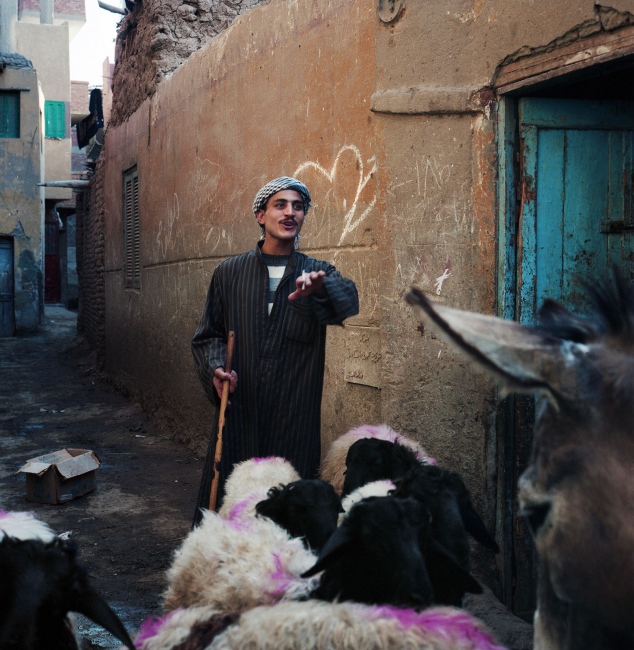 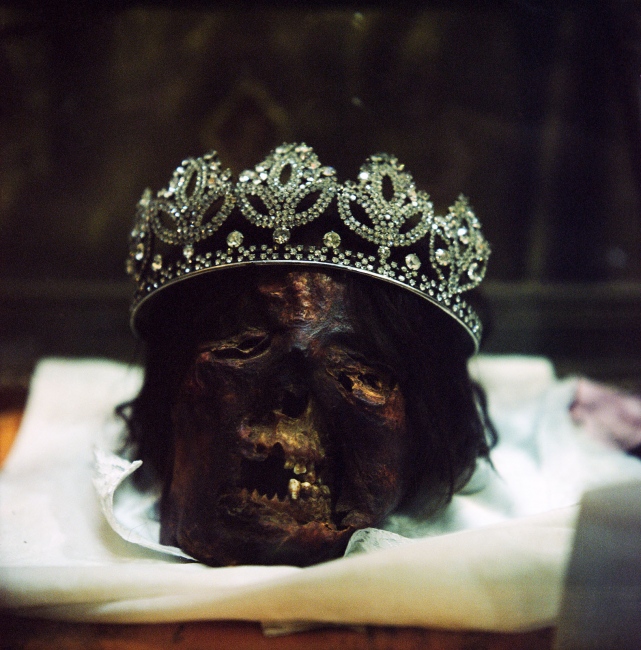 11 of 26 © 2020 Rena Effendi
Skull of a Coptic woman, one of the Great Martyrs of Akhmeem. The Monastery of Martyrs in Akhmeem has become a pilgrimage site for many Copts as they believe visiting the relics of the saints can miraculously cure ailments. These relics of coptic martyrs date back to the period of Diocletian and his colleague Maximian, 284 A.D. "The saints are bleeding to this day and the women's hair is still growing, we even have to trim it. When the pope took one of the heads in his hands, the head glowed. They are blessed!" - claims the monastery keeper in Sohag, Egypt. 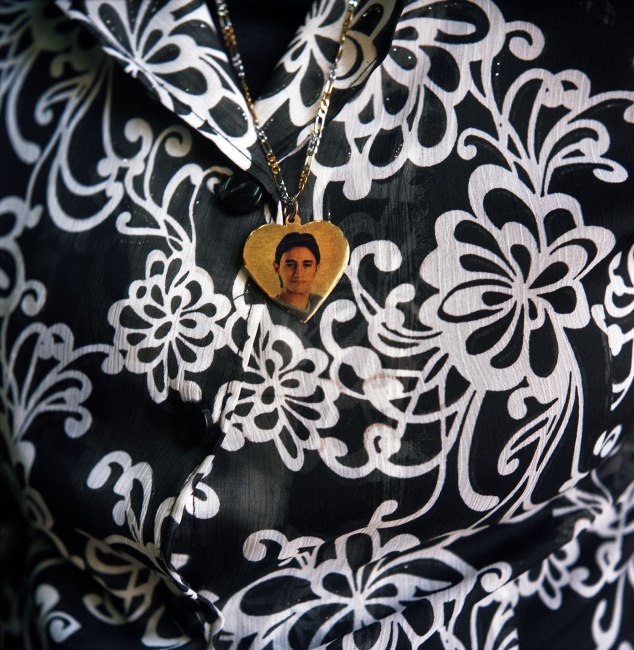 12 of 26 © 2020 Rena Effendi
Pendant with a photograph of Abenoub Kamal Mashid on his mother's Zizi Noskhi's chest. Abenoub Kamal Mashid, a 19 year old law student was shot dead on El Mahattam street outside the Nag Hammadi cathedral in Nag Hammadi city on the Coptic Christmas eve of January 7, 2010. Gunfire from a passing car took the lives of eight young coptic men aged between 15 and 23. Abenoub was meeting his friends outside the church when he got shot. Three men were arrested and charged with murder, one of the shooters received capital punishment, the other two were later released. Abenoub's father says: "Crimes against Copts continue and remain largely unpunished. They want to push us out, but it's our land too, we will not leave no matter what". 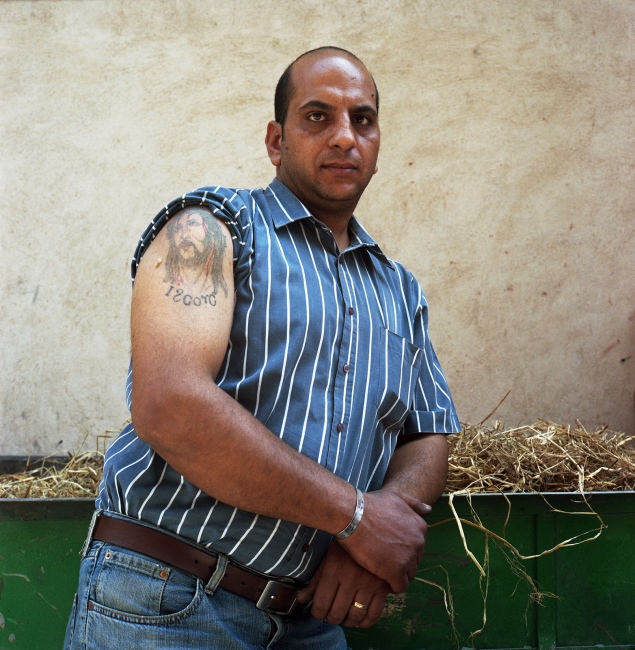 13 of 26 © 2020 Rena Effendi
Magdi, a tattoo artist outside the Mar Girgis Church in Coptic Cairo. Copts continue the ancient tradition of tattooing dating back to Pharaonic era. A very common tattoo design is a small cross on the back of a wrist. The tattoos of crosses mark members of the Coptic community on both children and adults. Other people choose a more expanded version of a Christian tattoo: images of Jesus, the Virgin Mary or Saint George are some of the popular designs. 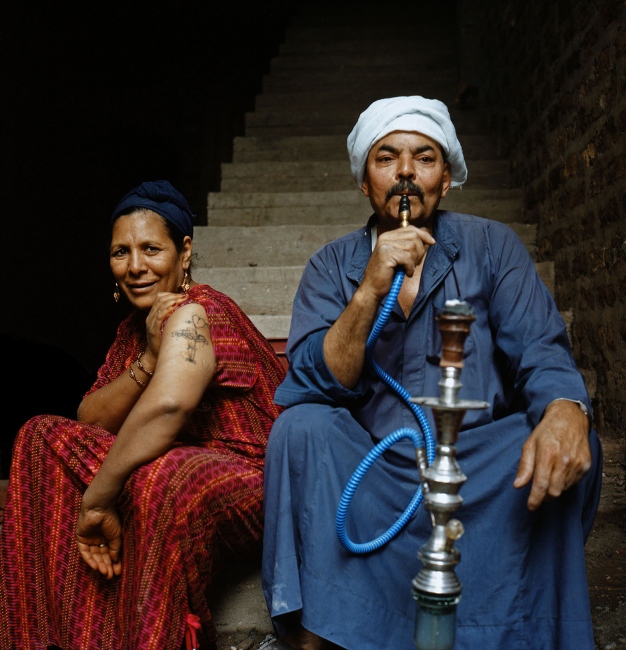 14 of 26 © 2020 Rena Effendi
A couple relaxes on the porch of their home. The woman shows off her tattoo of a crucified Jesus and a heart pierced with an arrow in El-Kosheh village of Sohag. While tattoo making is predominantly a taboo for Muslims in Egypt, Copts continue the ancient tradition of tattoo making dating back to the pharaonic times. 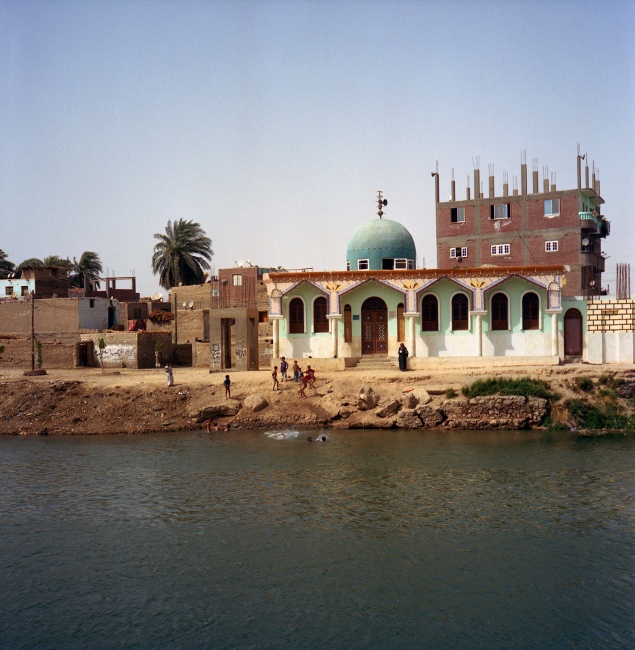 15 of 26 © 2020 Rena Effendi
On the way to Sohag in the upper Nile delta home to large concentrations of coptic christians in Egypt. 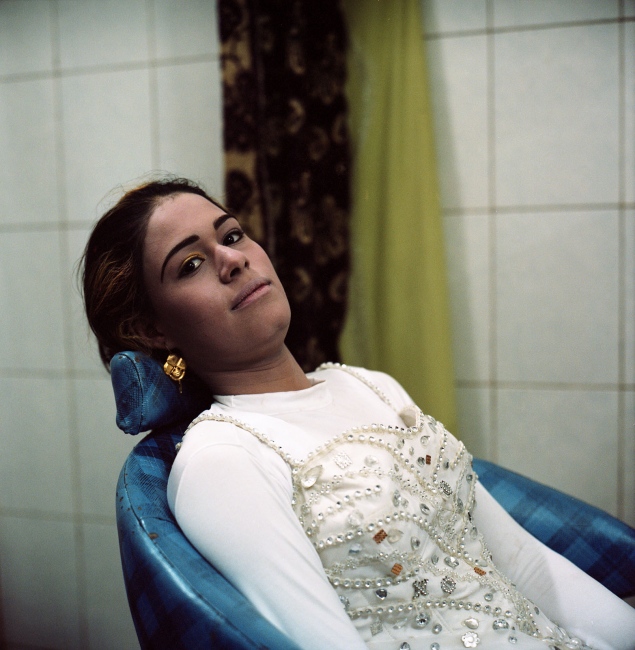 16 of 26 © 2020 Rena Effendi
A bride getting ready for her photoshoot at a Coptic-owned wedding photo salon in Sohag. 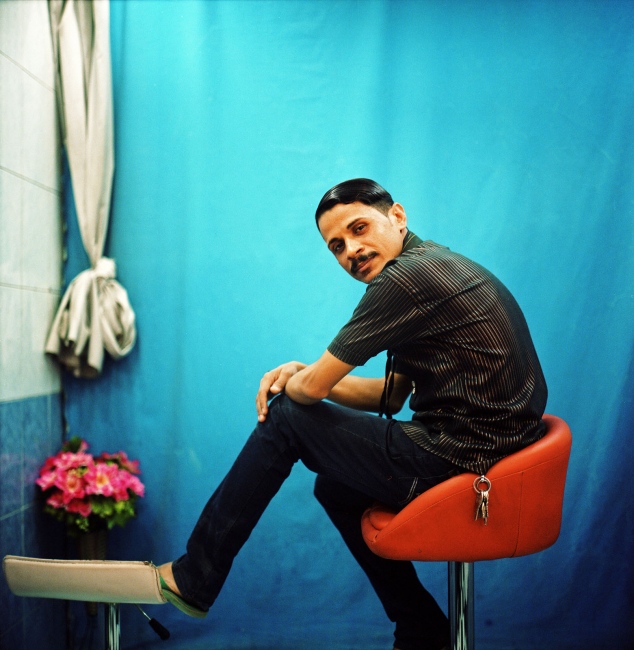 17 of 26 © 2020 Rena Effendi
Coptic wedding photographer in his studio in Sohag. 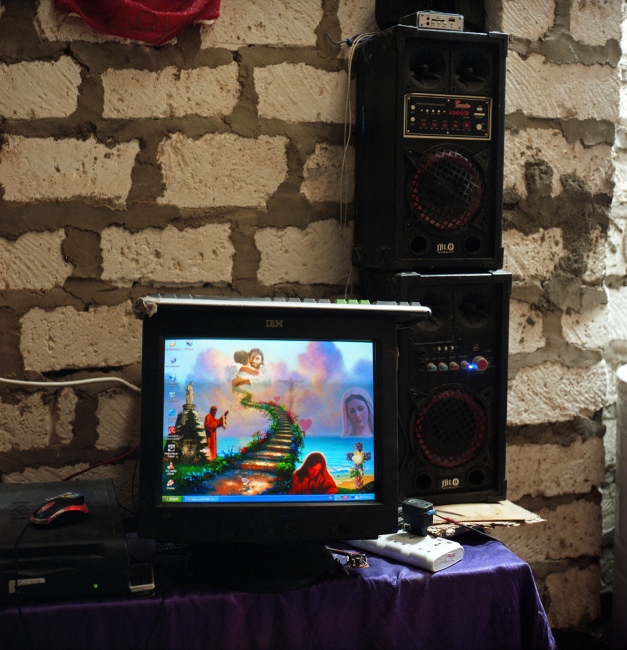 18 of 26 © 2020 Rena Effendi
Coptic home in El-Kosheh, a small Egyptian town where one of the bloodiest episodes of sectarian violence took place on January 2, 2000. According to the eyewitnesses, following a dispute between a Coptic trader and a Muslim customer relationships soured between the two communities in the town of about 35,000 people with 70% Coptic majority. As a result, Muslim mobs burned 260 Coptic shops and homes and killed 21 Coptic residents. Some perpetrators of the violence were arrested, but later released. The only person convicted in this case was a Muslim man who allegedly shot another Muslim. He was sentenced to 13 years in prison. 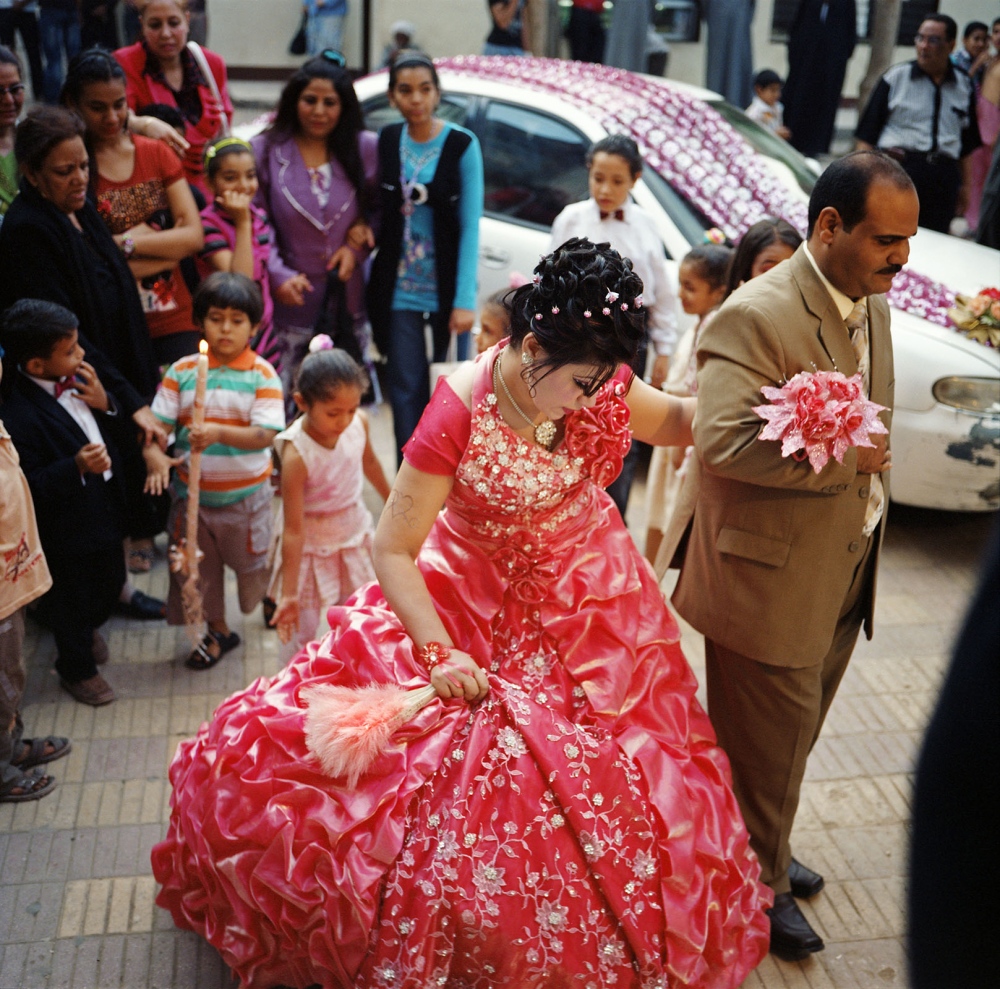 19 of 26 © 2020 Rena Effendi
A coptic engagement party in Rahmaniya-Kebly village of Nag Hammadi in Qena. In January 2012, a Muslim mob attacked and burned Coptic homes and shops in Rahmaniya-Kebly village in the presence of security forces that, according to the local reports, did nothing to prevent the attacks. The dispute originated from a property rights issue between a Coptic owner and a Salafi resident of the village, but later progressed into political disputes. Half of the village population is Copts. They refused to vote for the Salafi promoted candidates in the local council elections, which sparked clashes with the conservative Salafi groups in Qena, Egypt. 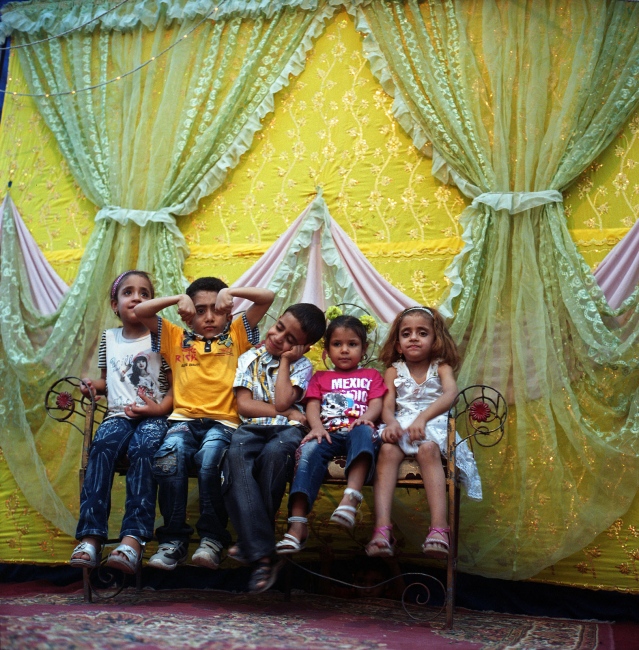 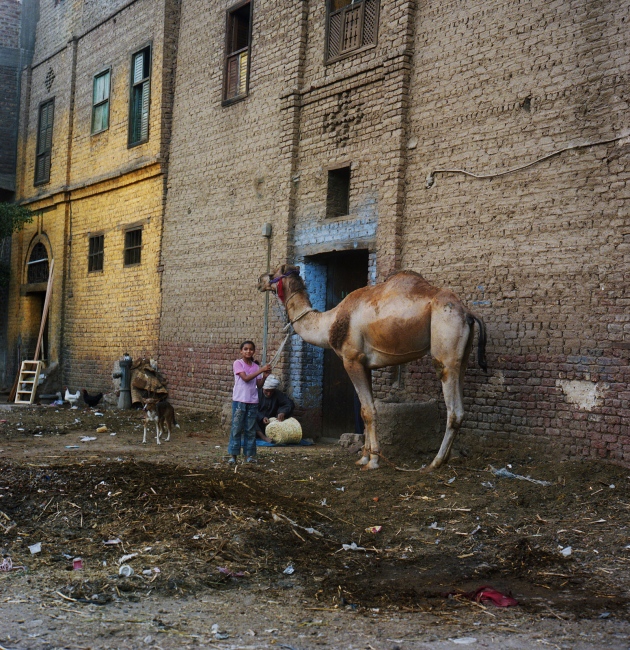 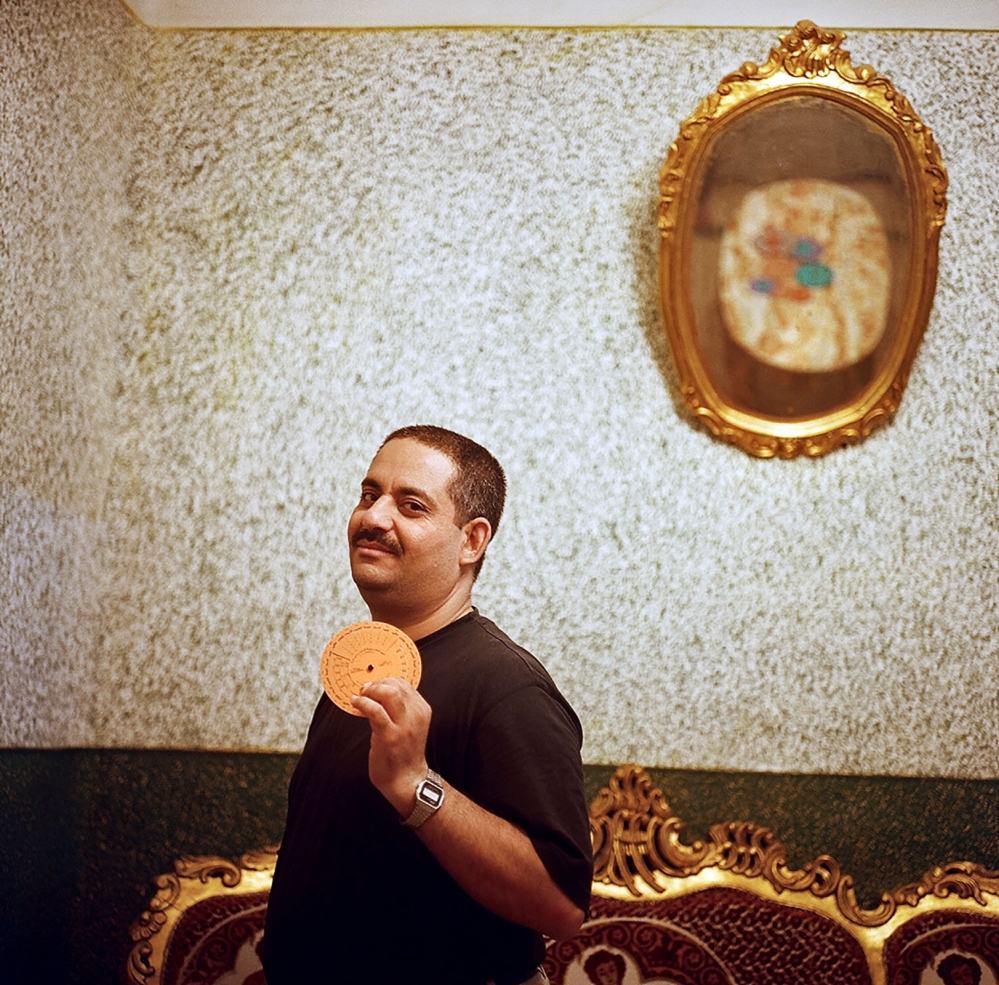 Ramses ‘Bassous’ Fared is a coptic computer engineer in Nag Hamadi, who designed a lunar calendar to calculate the dates of Easter and other coptic christian holidays and festivals. 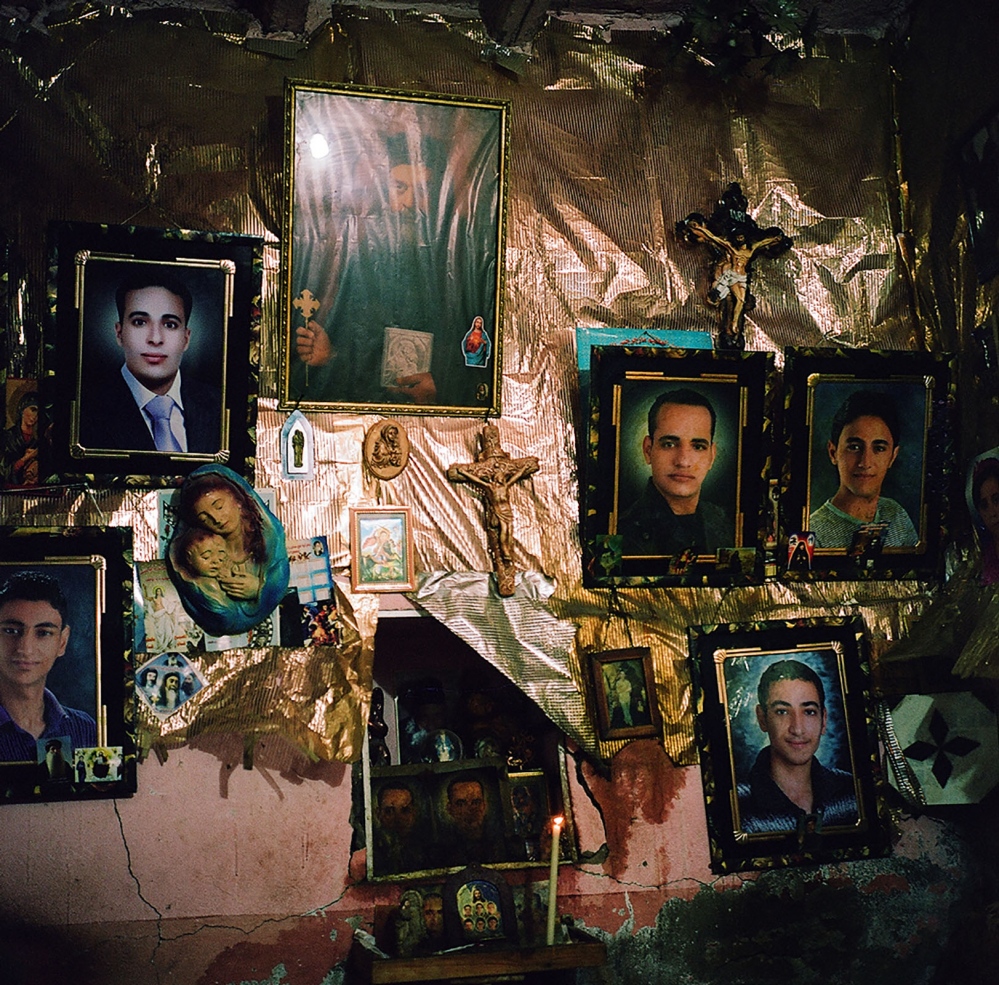 Photographs of terror victims on display at the home of Fumeya Shohdi, mother of Mena Helmi, a 19 year old highschool student who was shot dead outside the Nag Hammadi cathedral on January 7, 2010. His older brother Milad Helmi 25. y.o. computer salesman says: “Our relationships with Muslims were much better in the past. Now because of social media it has become much easier and faster to spread messages of hatred. Now anyone can open a page and preach hatred and radical ideas.” 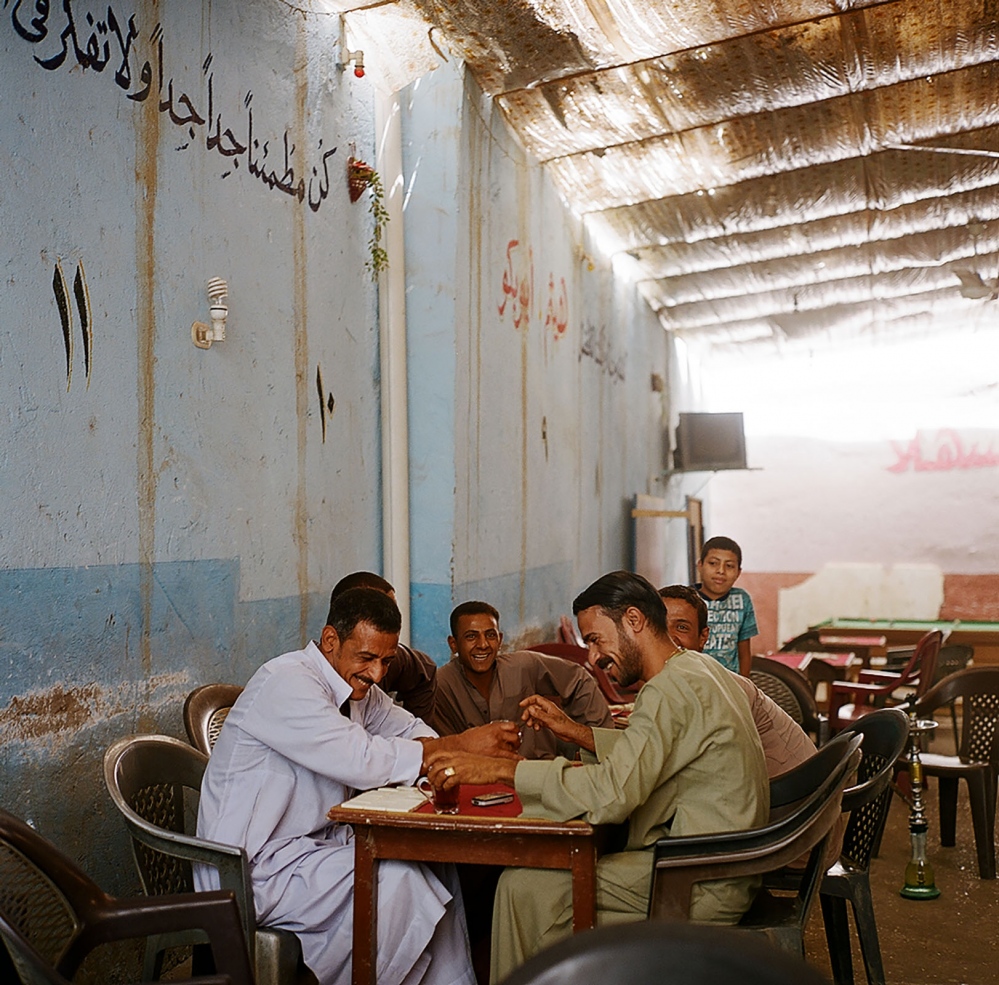 24 of 26 © 2020 Rena Effendi
Men drink tea in a cafe in El-Kosheh, a small predominantly Christian town in Sohag, where one of the bloodiest episodes of sectarian violence took place on January 2, 2000. 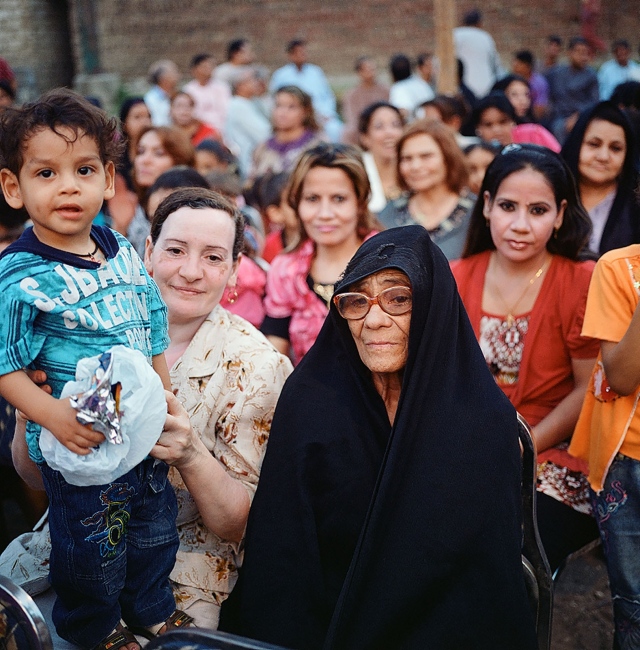 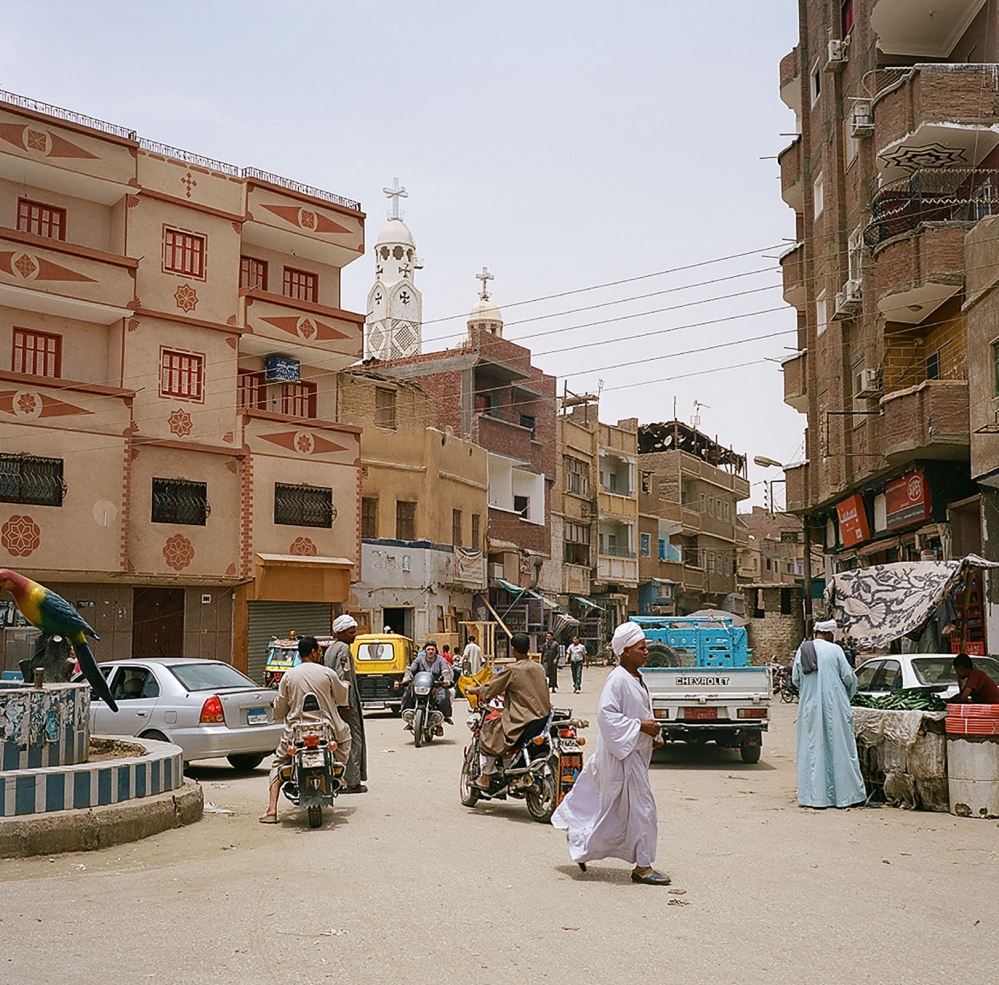 Street scene of El-Kosheh, a small town of majority coptic christian population where one of the bloodiest episodes of sectarian violence took place on January 2, 2000 in Sohag, Egypt

Coptic Christians in Egypt number more than 10,000,000, making them the largest (religious) minority group in the country, one that has become more a target for extremists in the past years than ever before. Since the toppling of Hosni Mubarek, acts of aggression and violence, in addition to the usual discrimination and governmental neglect, have instilled fear in the Coptic community at their future prospects of a peaceful existence in Egypt. At the same time, many of the Christians insist that the country, and their rights to live, work and thrive in it are worth fighting, and even dying for. "We are here, and we are not leaving!", so many of the Copts say in response to the spike in religious-based violence against them.

Focusing on the headlines though obscures the fact that there are pockets of tolerance and integration, and that the Christian community is diverse and evolving - activists, priests, farmers, garbage collectors; however, this is still and fundamentally a story of people who feel they are being pushed closer to the edge, people who do not want to or feel like they should budge.

By Rena Effendi — When a conflict broke out between Georgia and Russia in August 2008 over the Russian backed self-proclaimed..
May 5, 2018

By Rena Effendi — Liquid Land is co-authored with my father Rustam Effendi, a dissident scientist and entomologist who..
May 4, 2018

By Rena Effendi — I first came to Khinaliq to document life in Azerbaijan’s highest inhabited village in 2003...
May 4, 2018

By Rena Effendi — This story portrays Mahatma Gandhi and his enduring legacy in modern-day India trailing across the..
Apr 21, 2018

By Rena Effendi — For centuries, the small villages in Transylvania have preserved their hay meadows, raised cattle and..
Apr 21, 2018

By Rena Effendi — In 2015, just a year after winning the election, Egypt’s president Abdel Fatah Al-Sisi announced his plan..
Apr 20, 2018

By Rena Effendi — Ravaged by a never-ending war between various militias, rebels groups, and criminal combatants, the..
Apr 17, 2018

By Rena Effendi — This project documents a wide spectrum of wedding culture and traditions in Bangladesh. From luxurious..
Apr 17, 2018

By Rena Effendi — Text extract from the National Geographic Traveler, by: Bruce Shoenfeld Baku has always been at the..
Apr 17, 2018