The following work chronicles how Spain’s largest constitutional crisis since its transition to democracy manifests itself in Catalonia’s public spaces.  As an autonomous region of Spain with its own cultural heritage and language, Catalonia’s national aspirations came to a head with the Spanish state on October 1st 2017 when the autonomous government of Catalonia held an independence referendum deemed unconstitutional by the Spanish state. The Catalan voters were met with police brutality and their leader’s political dissent answered with a judicial crackdown.

With Catalan civic and political leaders facing trial in Spain for charges of Rebellion and Sedition, the Catalan struggle for independence has continued its protest in the street as a way of vindicating its right to self-determination.  The failed bid for independence has led to a divided Catalan society in which a parliamentary majority pursues the course set by the previously ousted autonomous government against the wishes of almost half of the Catalan population.

The result has been an almost two year identity crisis that has spanned beyond the Spanish court system and into the European Commission. These photographs explore how this crisis manifests itself through acts of civil disobedience, the use of nationalist symbolism, and ultimately a deep longing for a sense of identity.
Photographs with the caption (AP Photo/ Daniel Cole) were shot on assignment for the Associated Press. 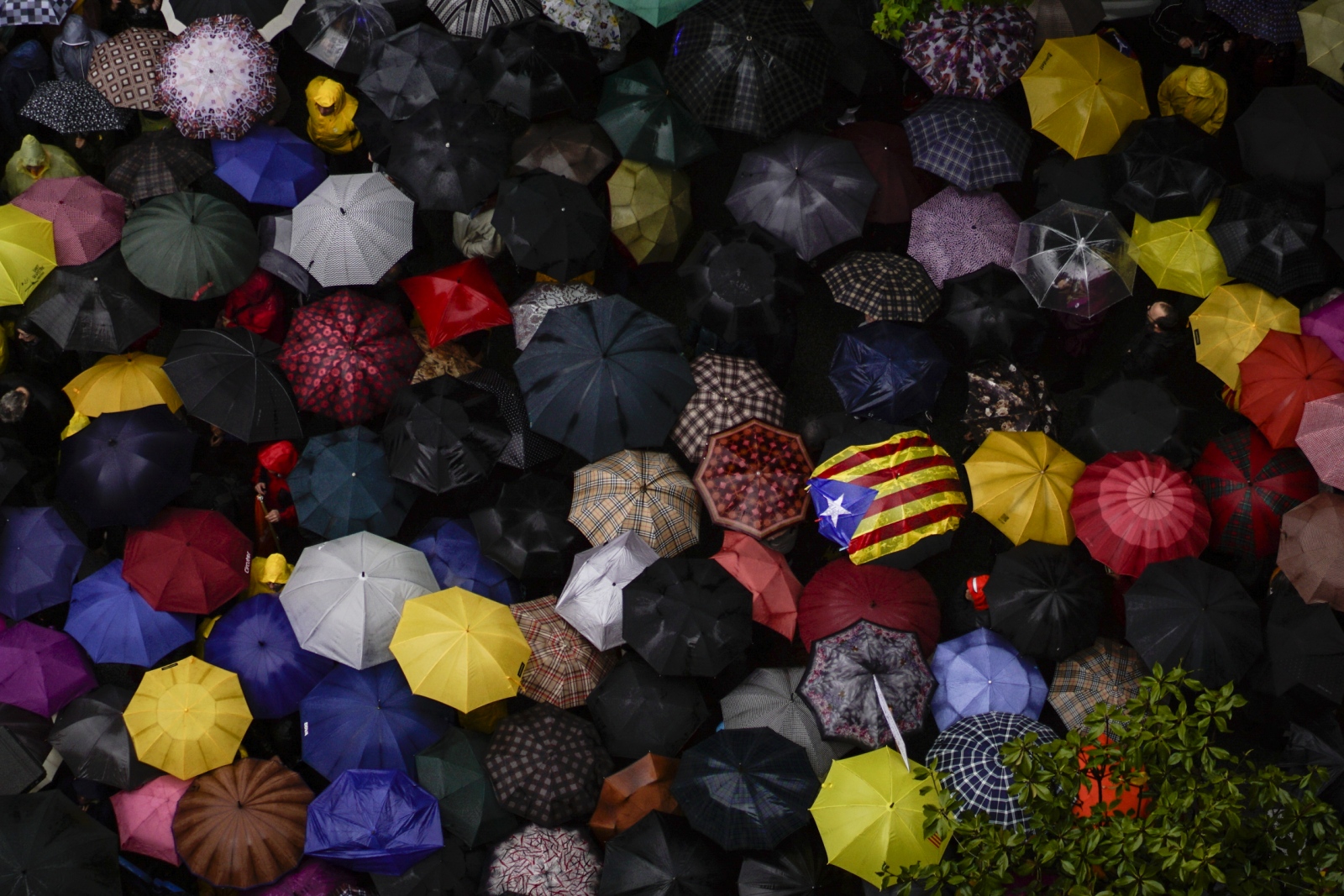 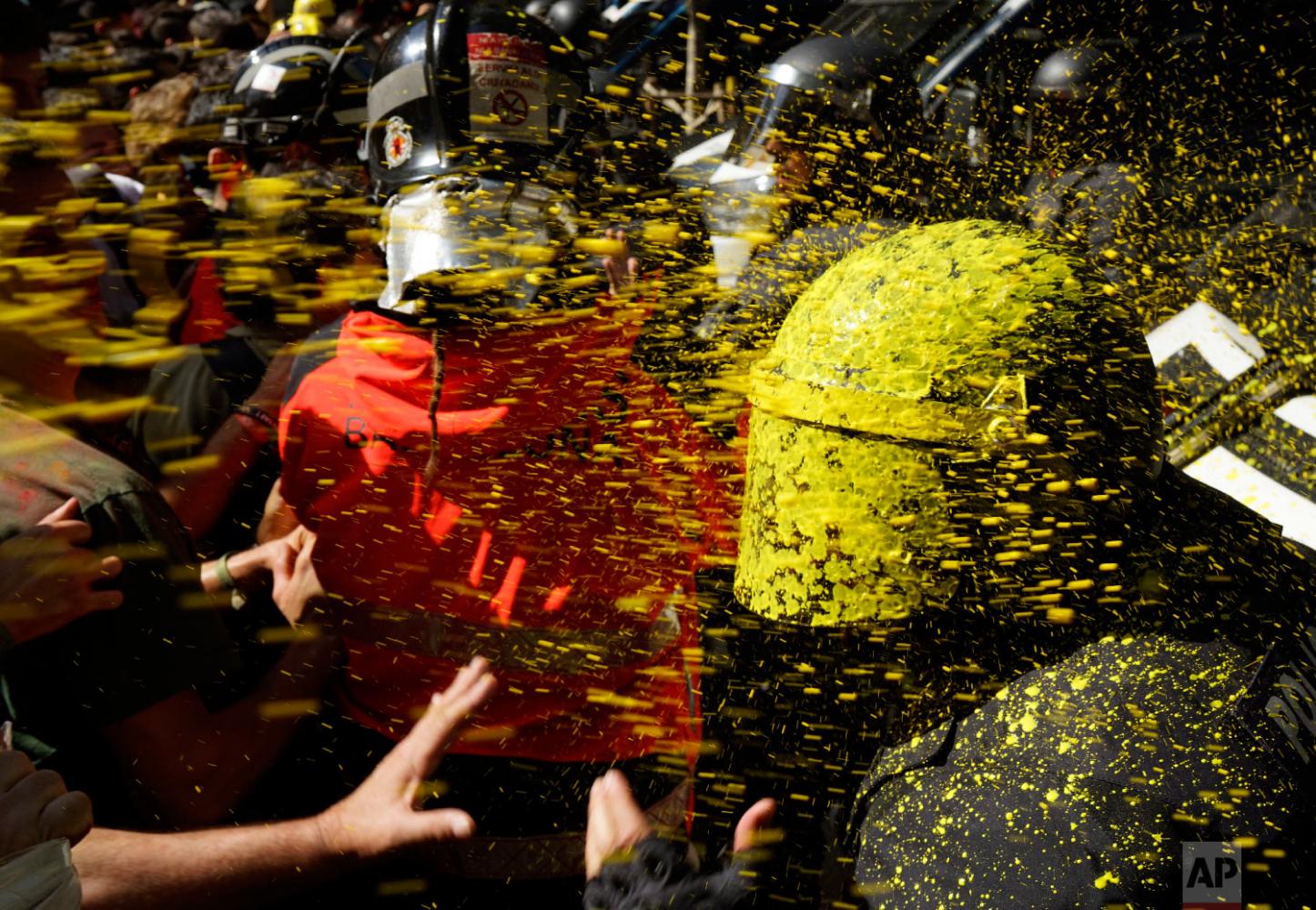 Pro independence demonstrators throw paint at Catalan police officers during clashes in Barcelona, Spain, on Saturday, Sept. 29, 2018. Catalan separatists clashed with police on Saturday in downtown Barcelona as tensions increase before the anniversary of the Spanish region's illegal referendum on secession that ended in violent raids by security forces. 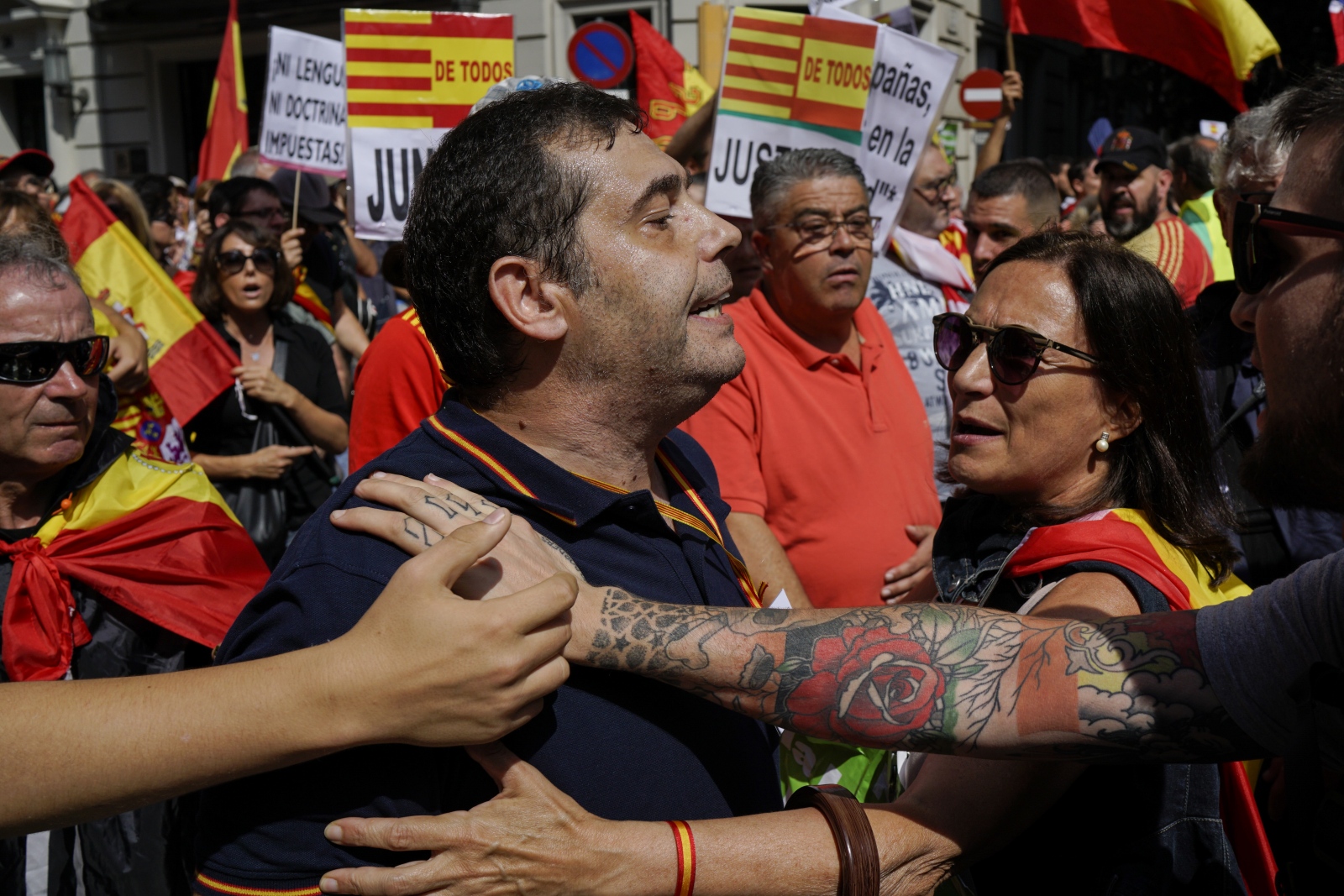 (AP Photo/Daniel Cole)
A demonstrator supporting Spanish unity shouts slogans towards Catalonian separatists during a demonstration in Barcelona, Spain, Sunday, Sept. 16, 2018. Police in Barcelona had to intervene on Sunday to keep apart a group of Catalan separatists and a march of those who support Spanish unity. Police formed a barrier to keep the opposing groups from reaching one another when the separatists rallied in a downtown square where the march in favor of the increased teaching of Spanish in local schools had planned to finish. 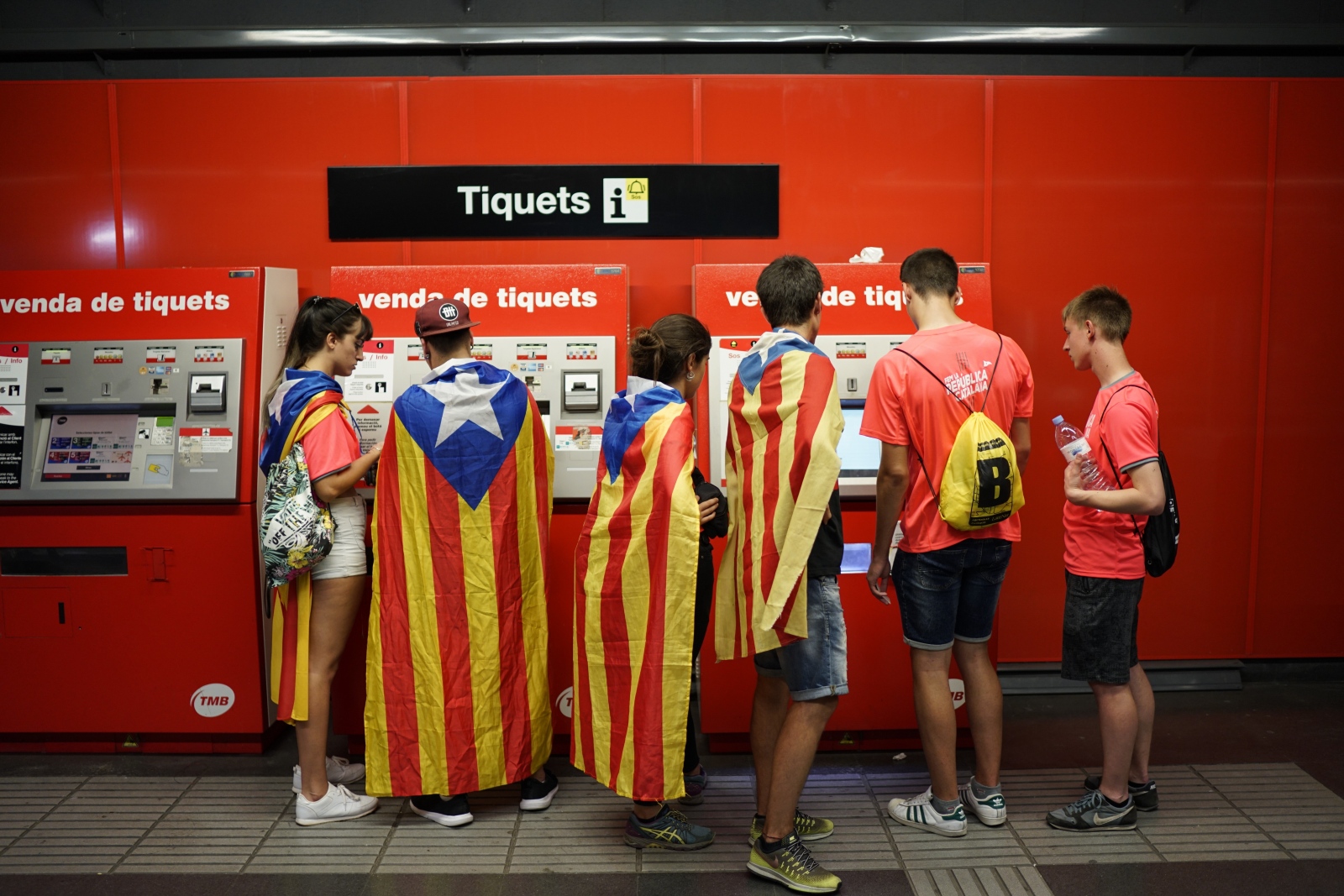 Youth carrying Catalan pro-independence flags on their shoulders get tickets for the subway on their way to a demonstration marking the Catalan National Day in Barcelona, Spain, Tuesday, Sept. 11, 2018. Catalan authorities have made a call to flood the streets of Barcelona later on Tuesday. Sept. 11, called "Diada," marks the fall of the Catalan capital to Spanish forces in 1714. 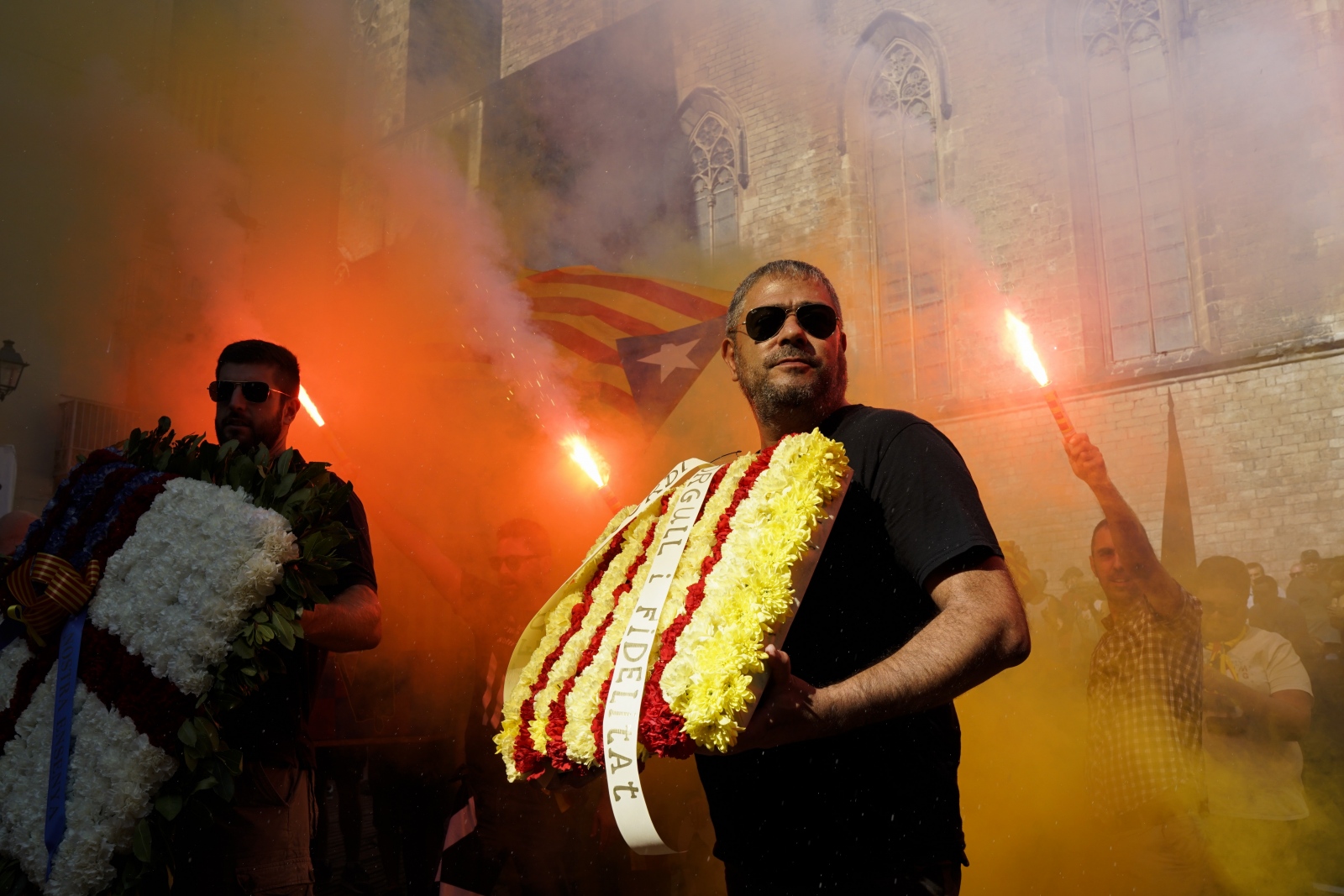 Demonstrators, some of them holding flares, march carrying "esteladas" or independence flags during the Catalan National Day in Barcelona, Spain, Tuesday, Sept. 11, 2018. Catalan separatist authorities have made a call to flood the streets of Barcelona later on Tuesday in a march calling for independence from Spain. The traditional march on the Sept. 11 "Diada," which remembers the fall of the Catalan capital to Spanish forces in 1714, is expected to attract this year hundreds of thousands of secession sympathizers. 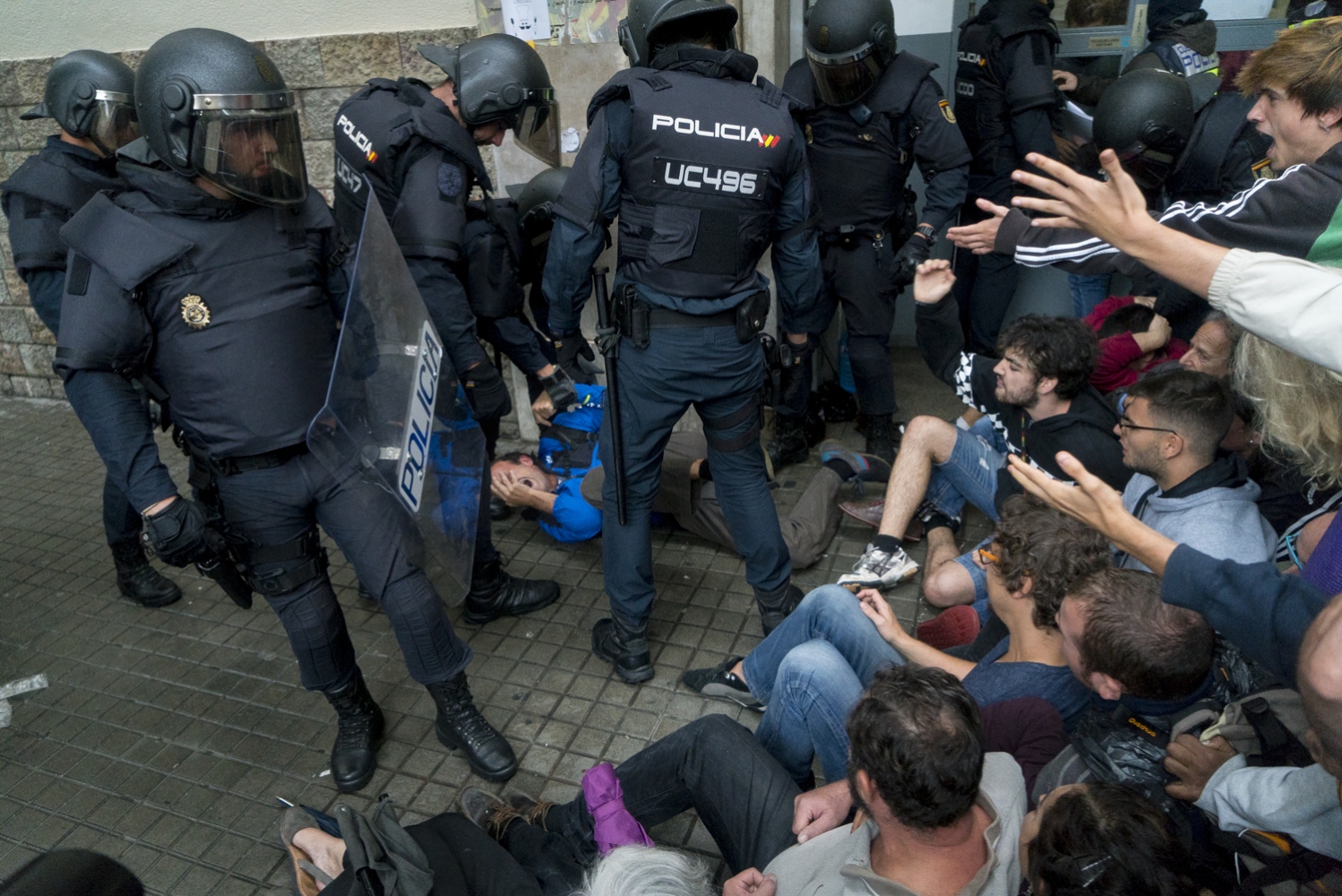 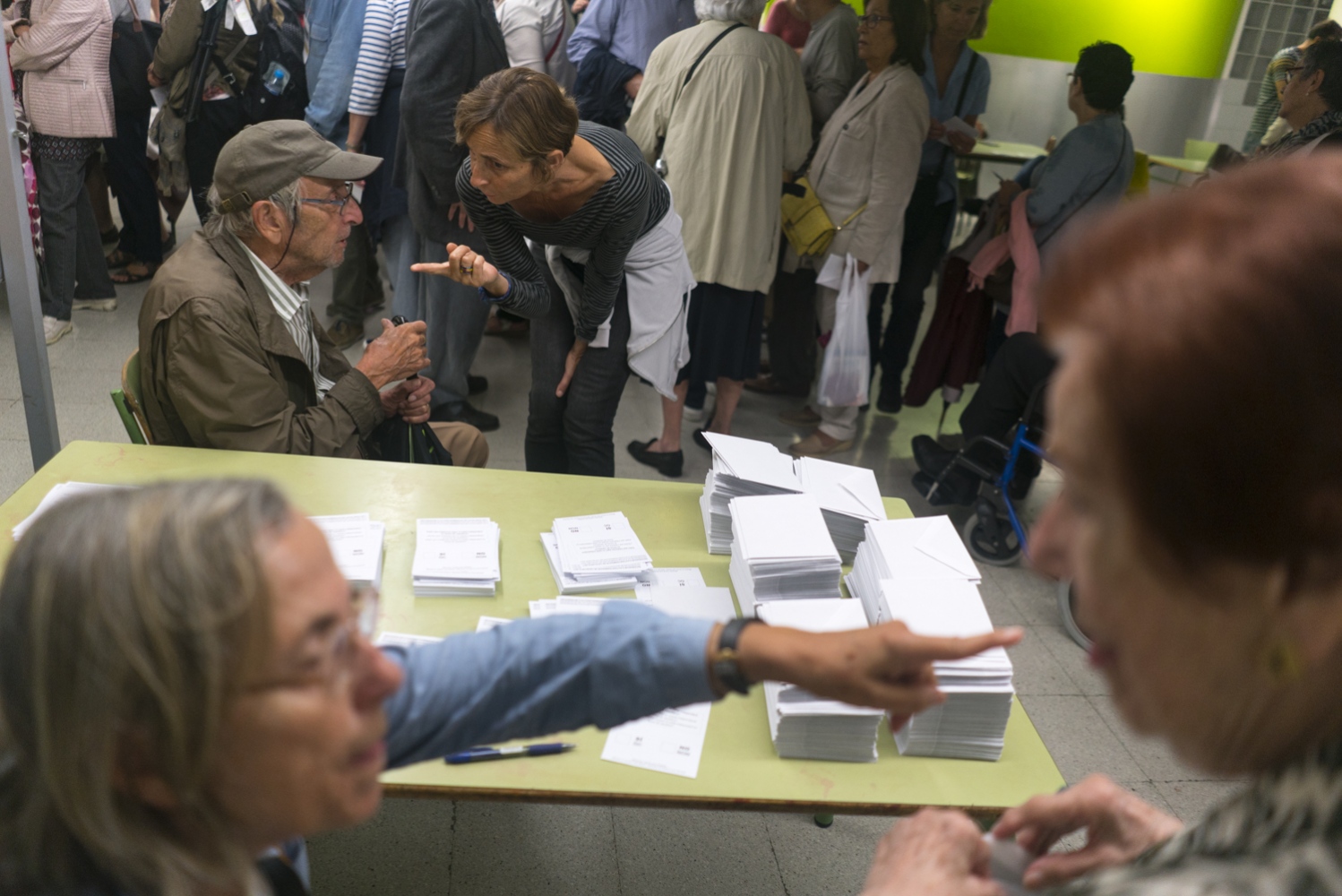 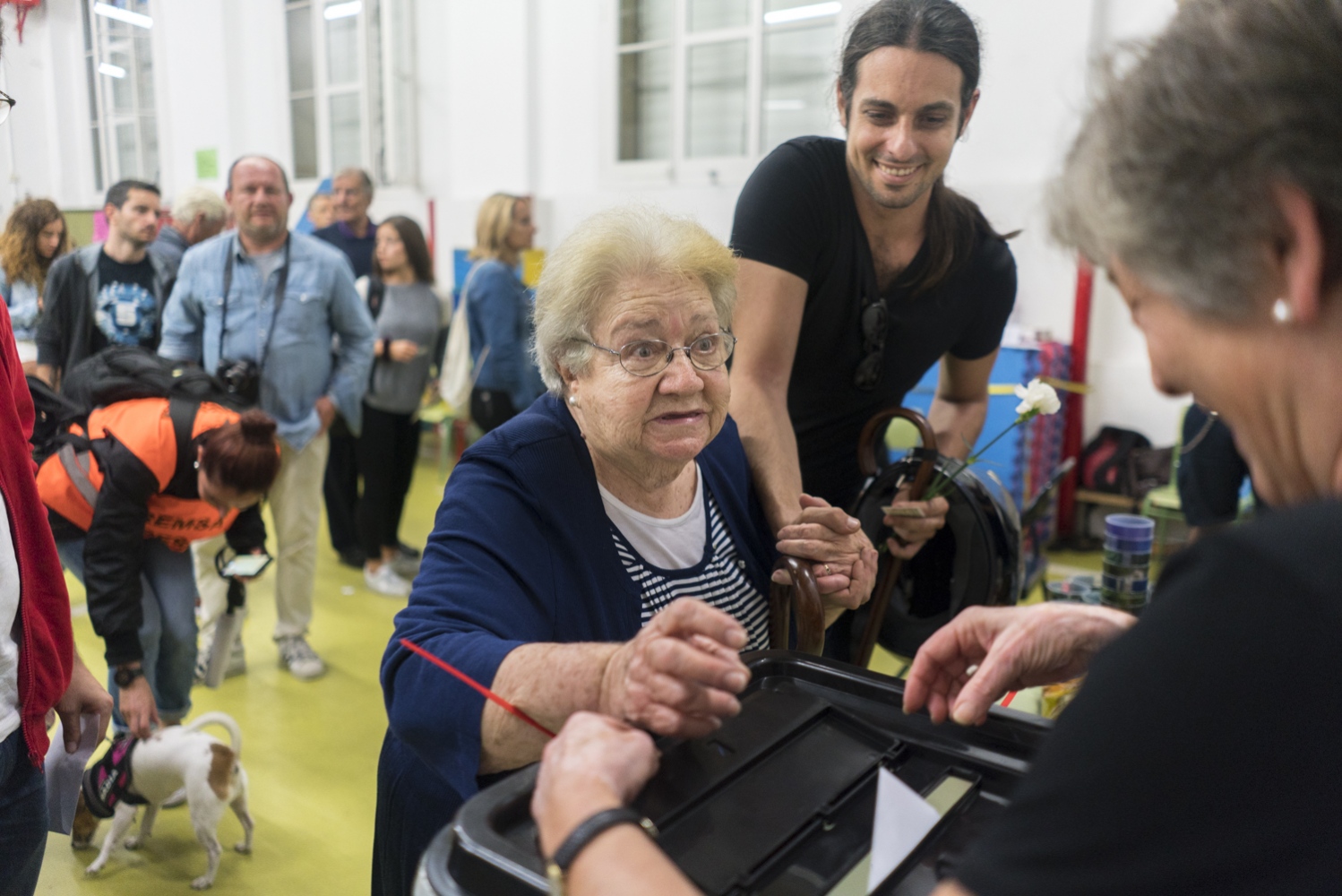 9 of 28 © 2020 Daniel Cole-ParéS
Having just met outside the voting center, Victor helped walk Magda through the crowd and to the voting tables. “I saw her outside struggling, and because I myself don’t have a grandmother to help, I said, today Magda will be my grandmother” Oct. 1, 2017. 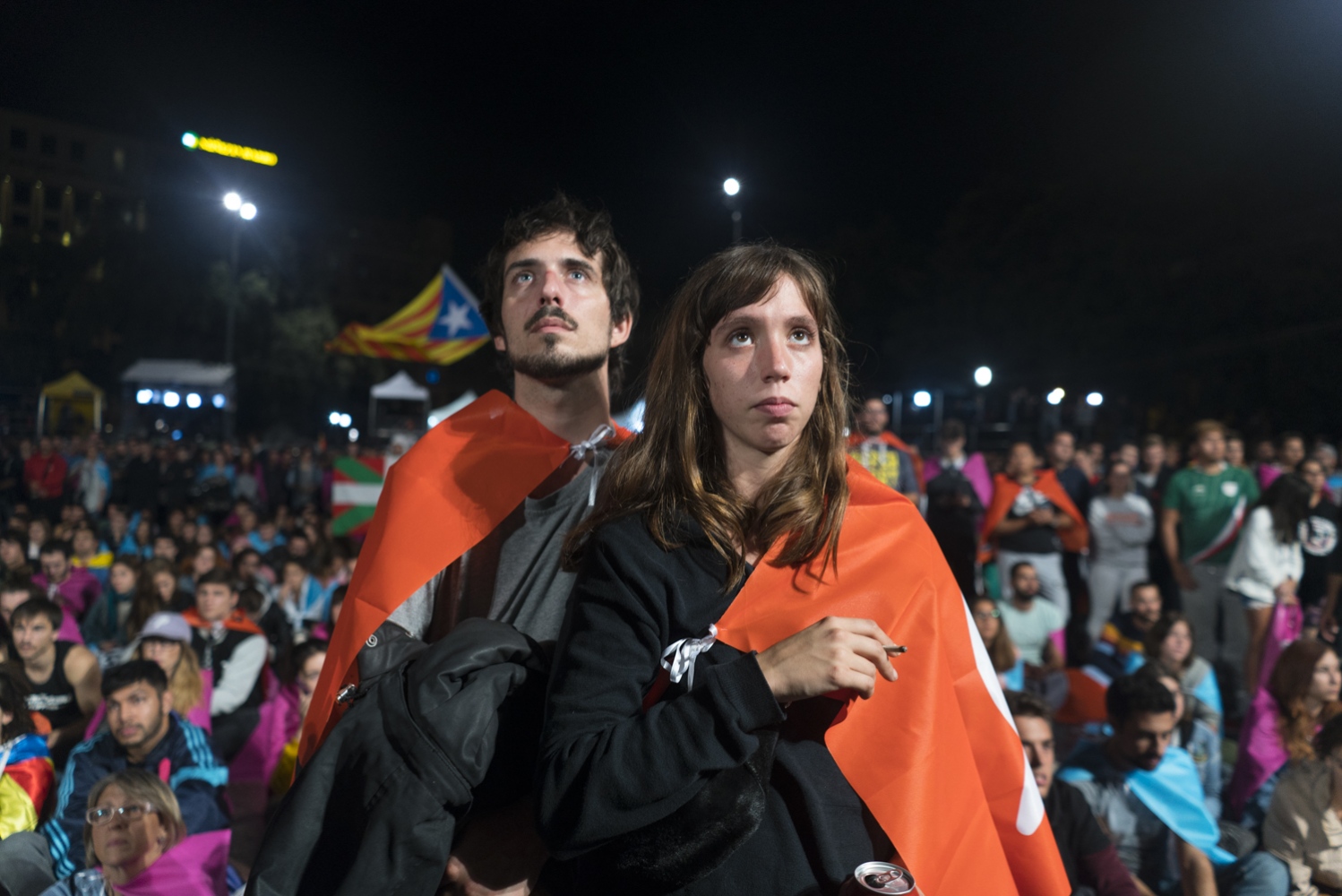 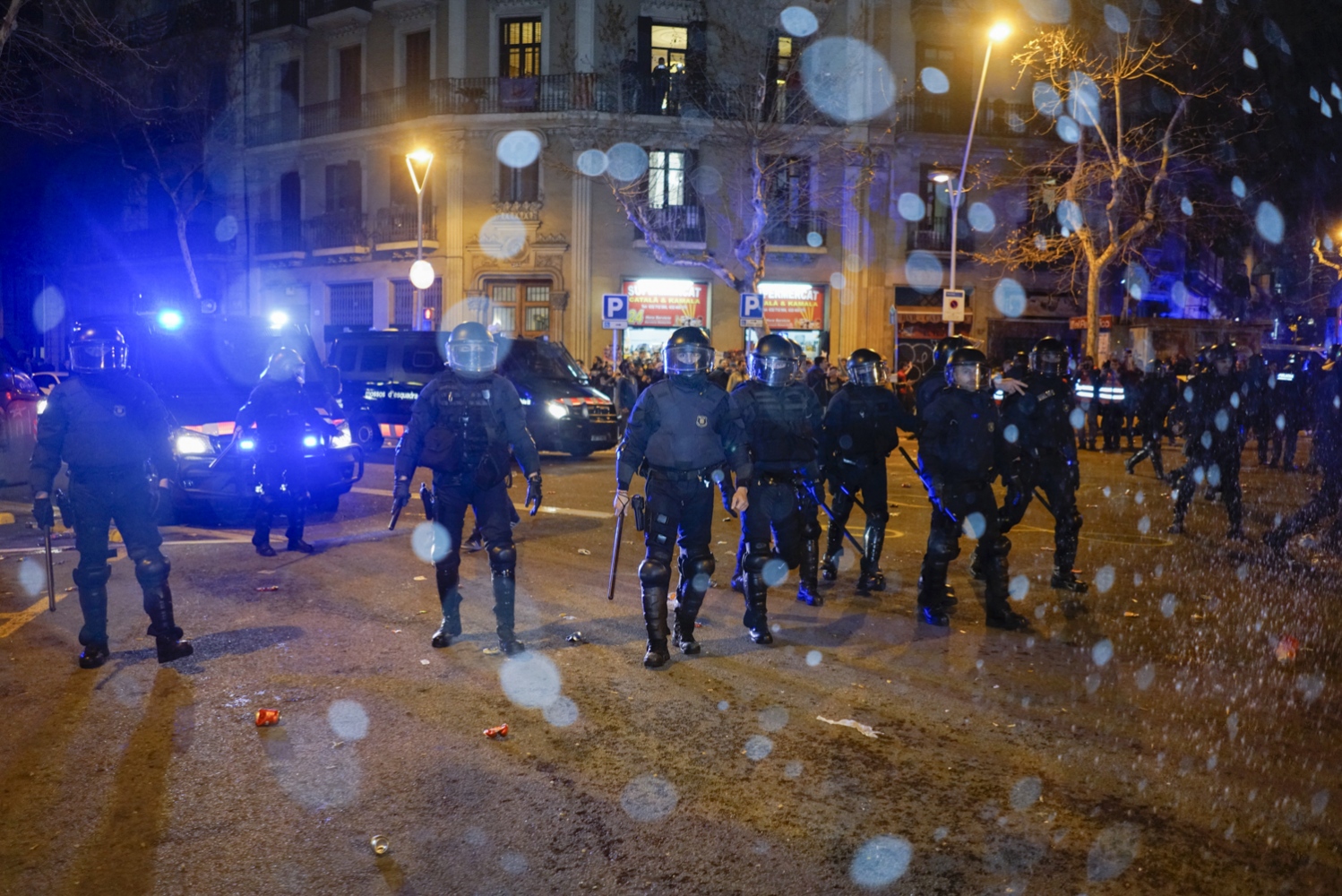 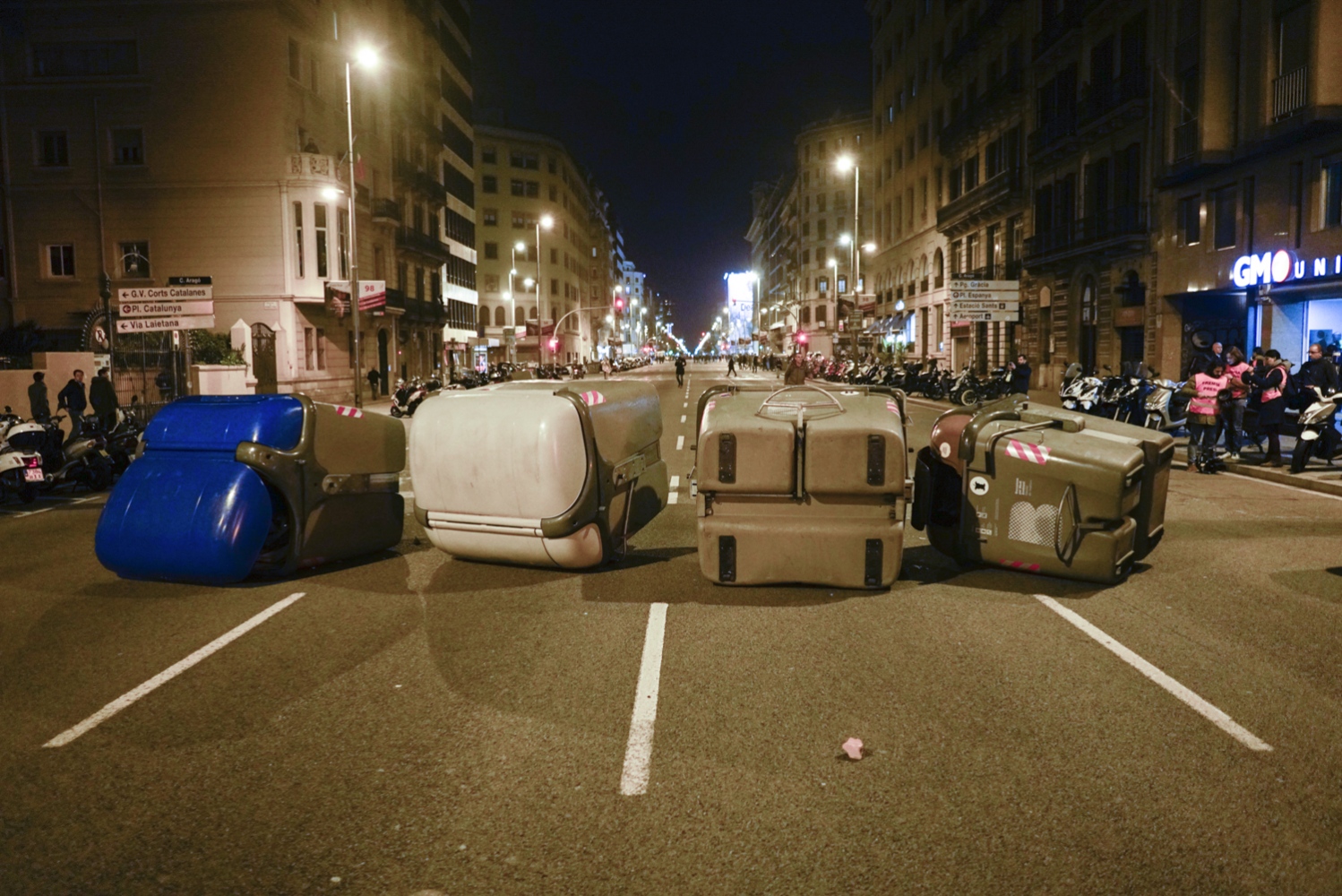 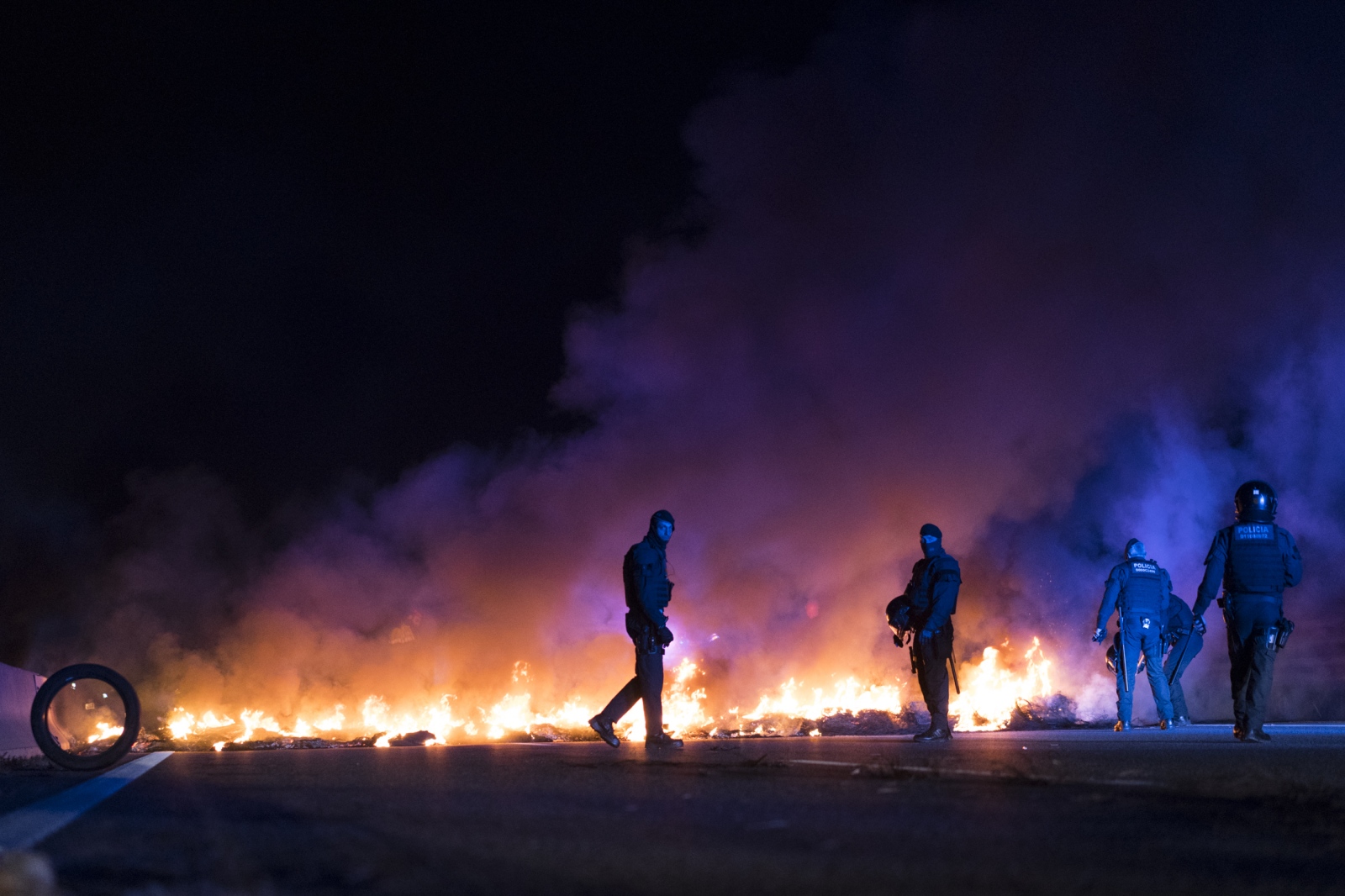 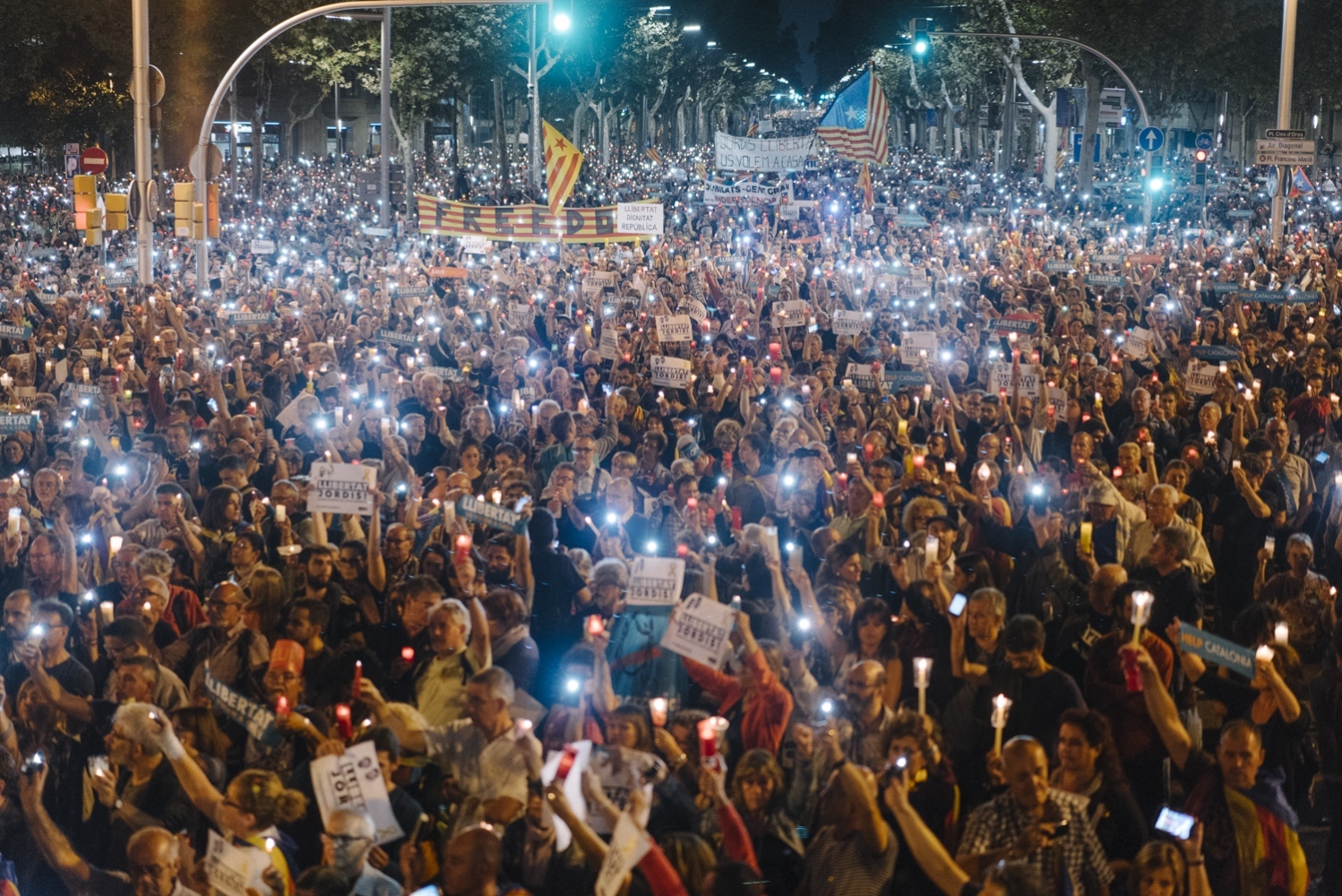 14 of 28 © 2020 Daniel Cole-ParéS
A crowd of over 200,000 people in Barcelona raise candles and phones during a five minute silence for Jordi&Jordi, the leaders of the largest civil societies in Catalonia who were imprisoned by a Spanish judge, Oct. 17, 2017. The leaders face charges of possible sedition for organizing protests on September 20th when the Spanish Guardia Civil arrested Catalan officials in various government offices in an attempt to foil the October 1st referendum. 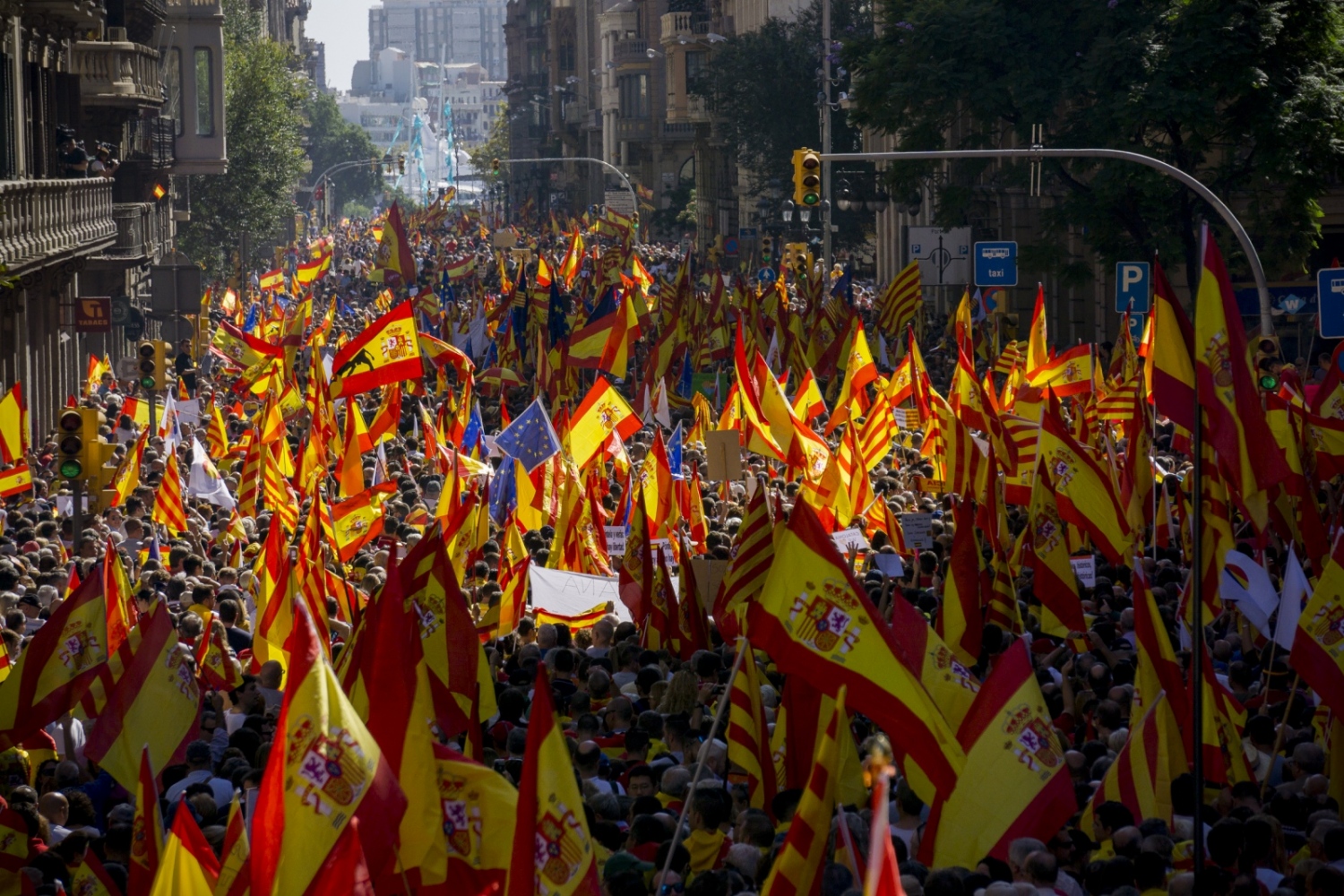 15 of 28 © 2020 Daniel Cole-ParéS
Hundreds of thousands of protesters fill Barcelona's Via Laietana, Oct. 8, 2017. Organized by the Societat Civil Catalana, the march drew 350,000 atendees according to the Guardia Urbana and just under 1 million according to the organizers. 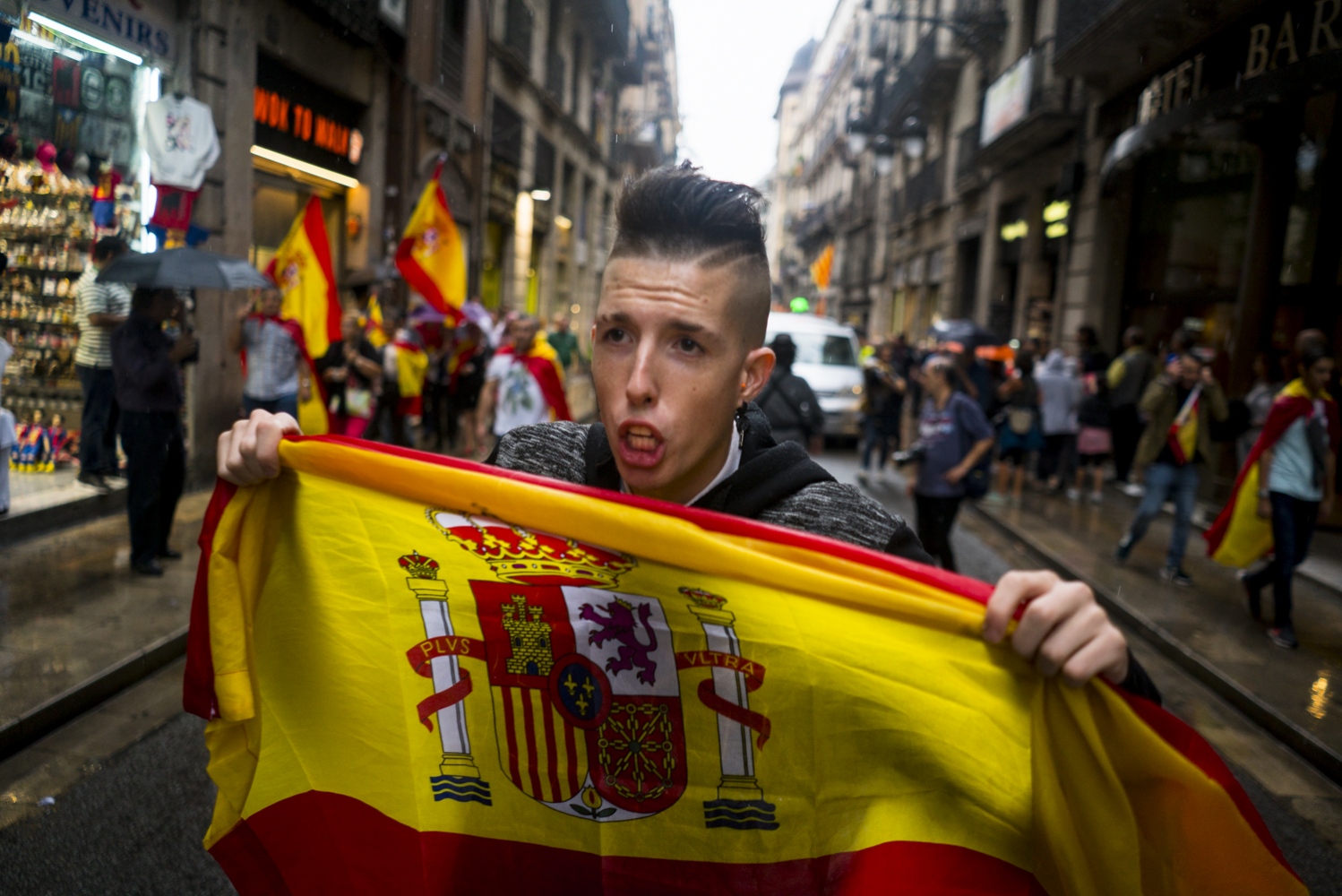 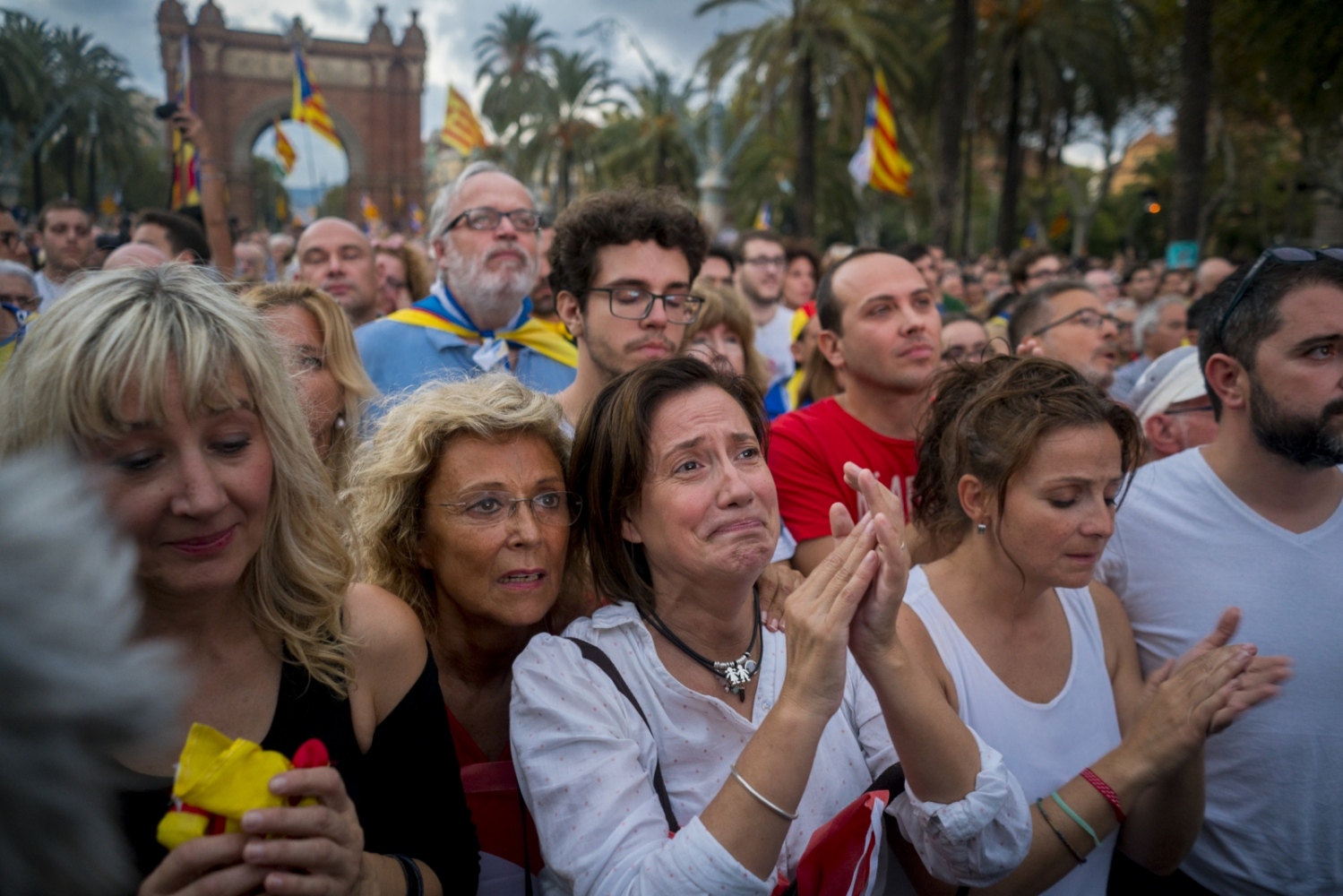 17 of 28 © 2020 Daniel Cole-ParéS
Muntsa Casas watches Catalan president Puigdemont's speech on a mega-screen in Barcelona on Oct. 10, 2017. After declaring independence the president suspended the declaration to pause for dialogue with Spain. 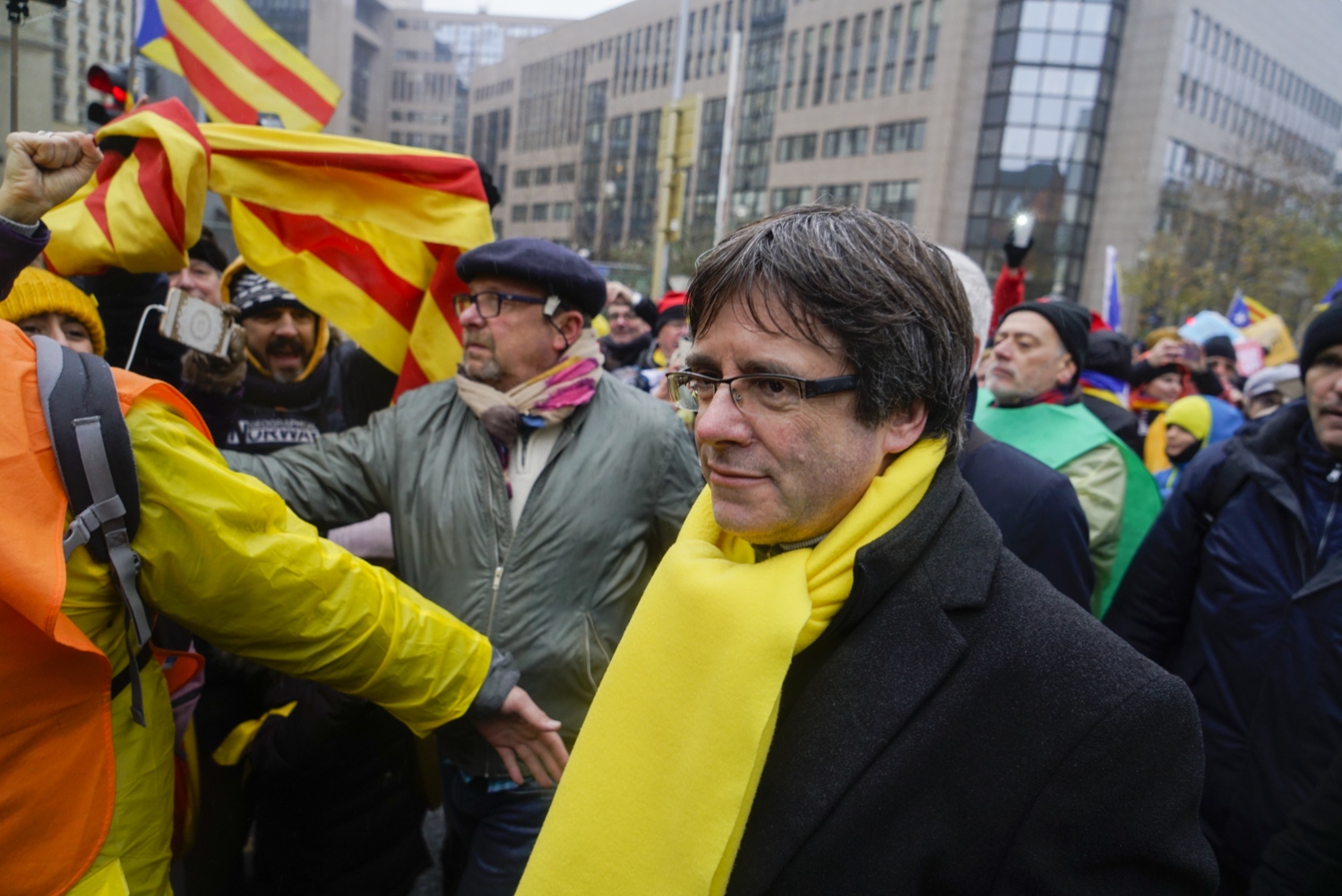 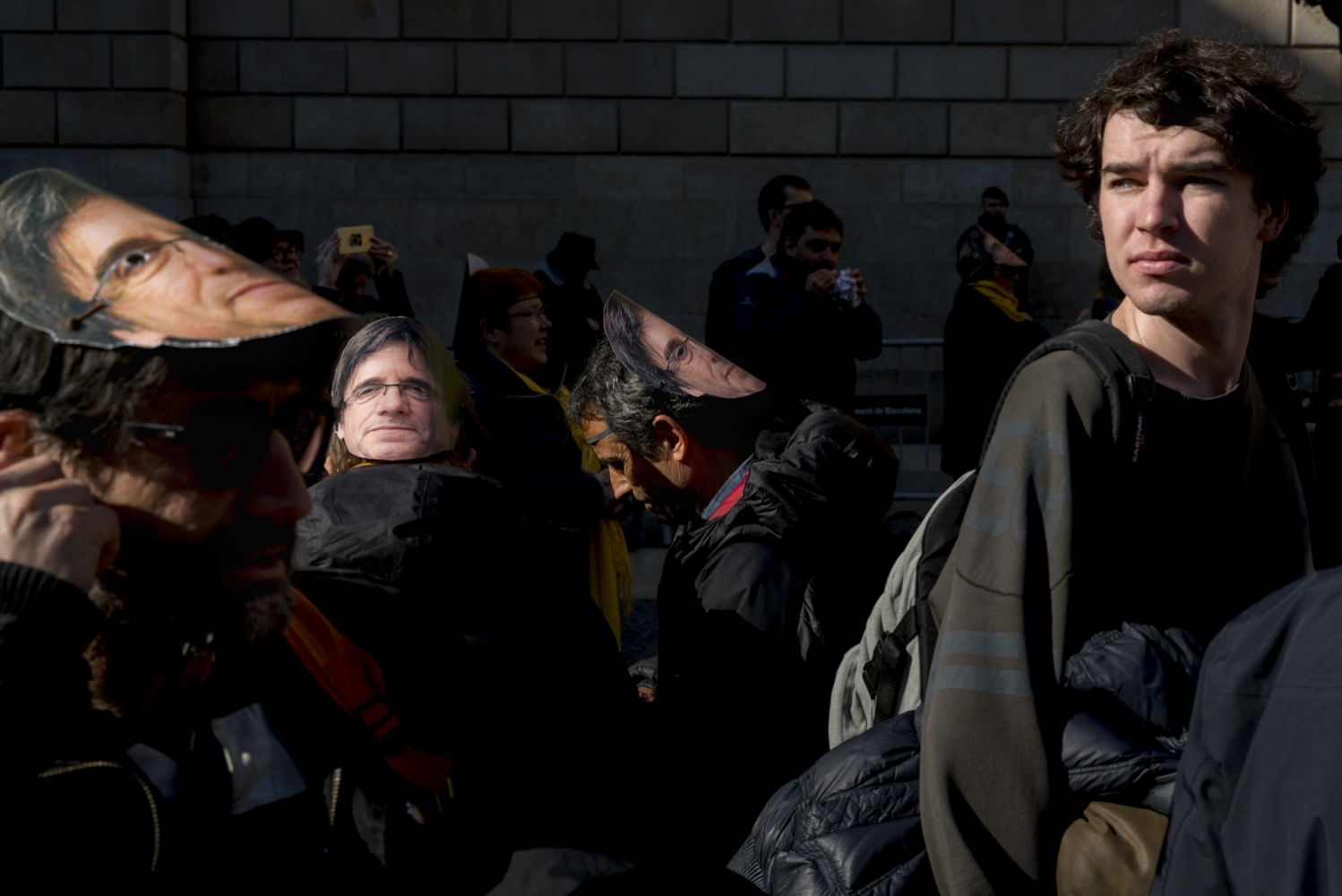 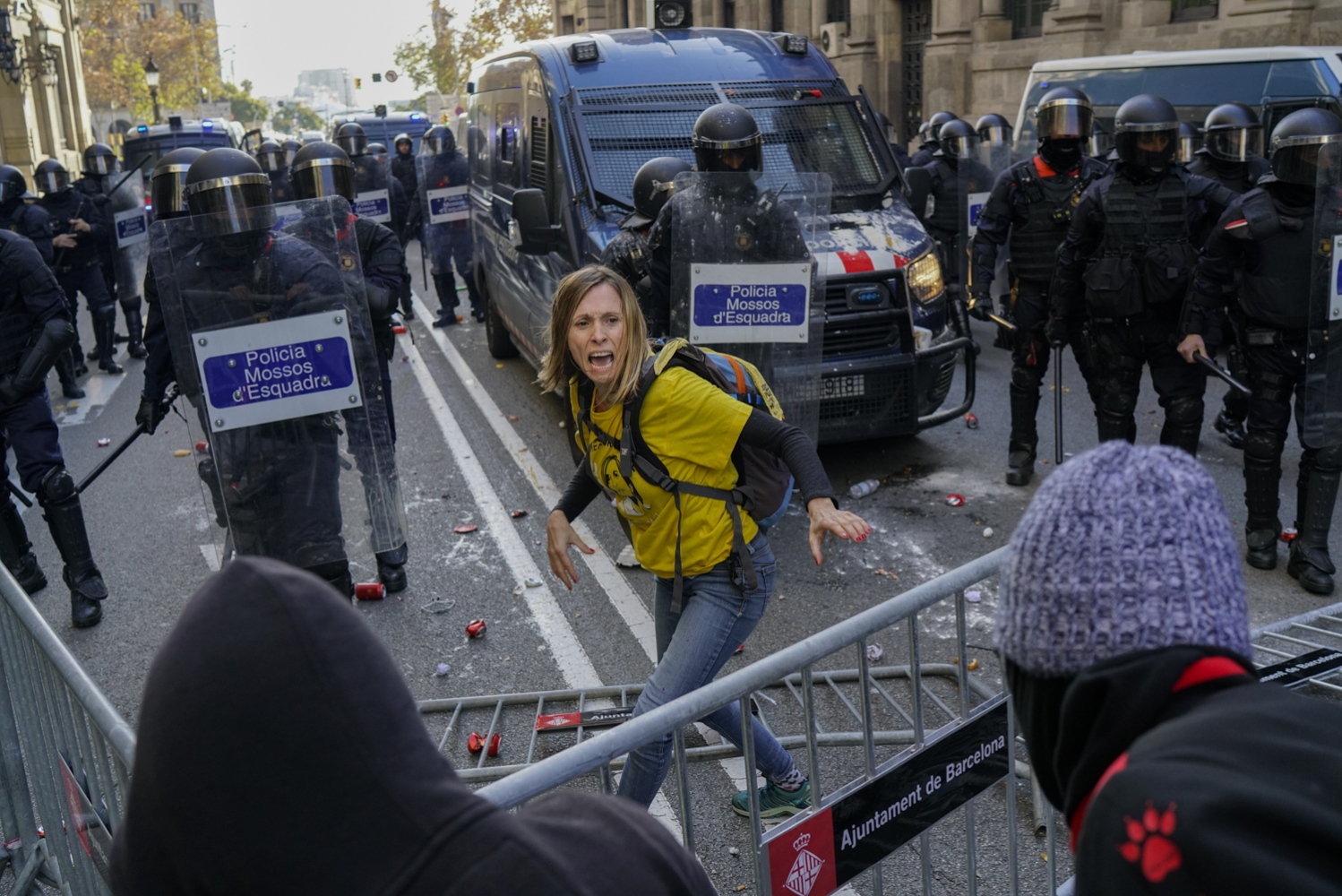 20 of 28 © 2020 Daniel Cole-ParéS
A peaceful protester tries to stop fellow protesters from breaching a police barrier and disrupting the Spanish Cabinet from holding a meeting in Barcelona, Dec. 21, 2018. 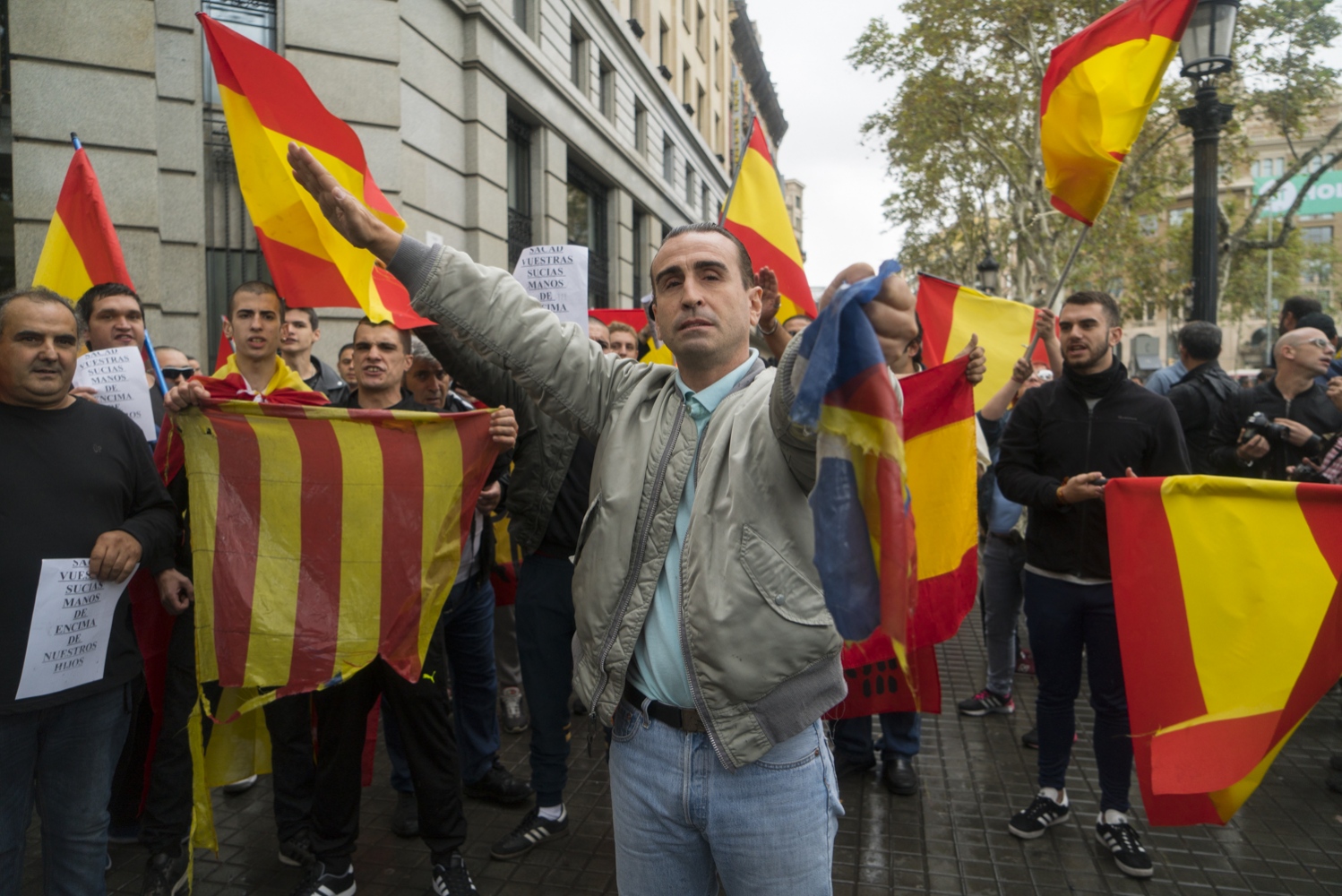 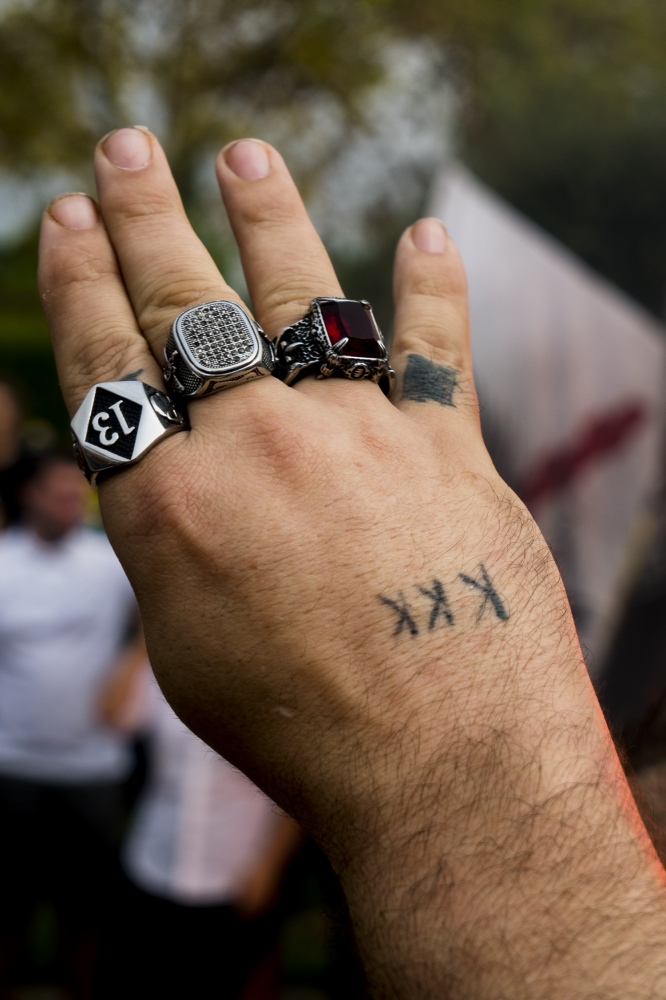 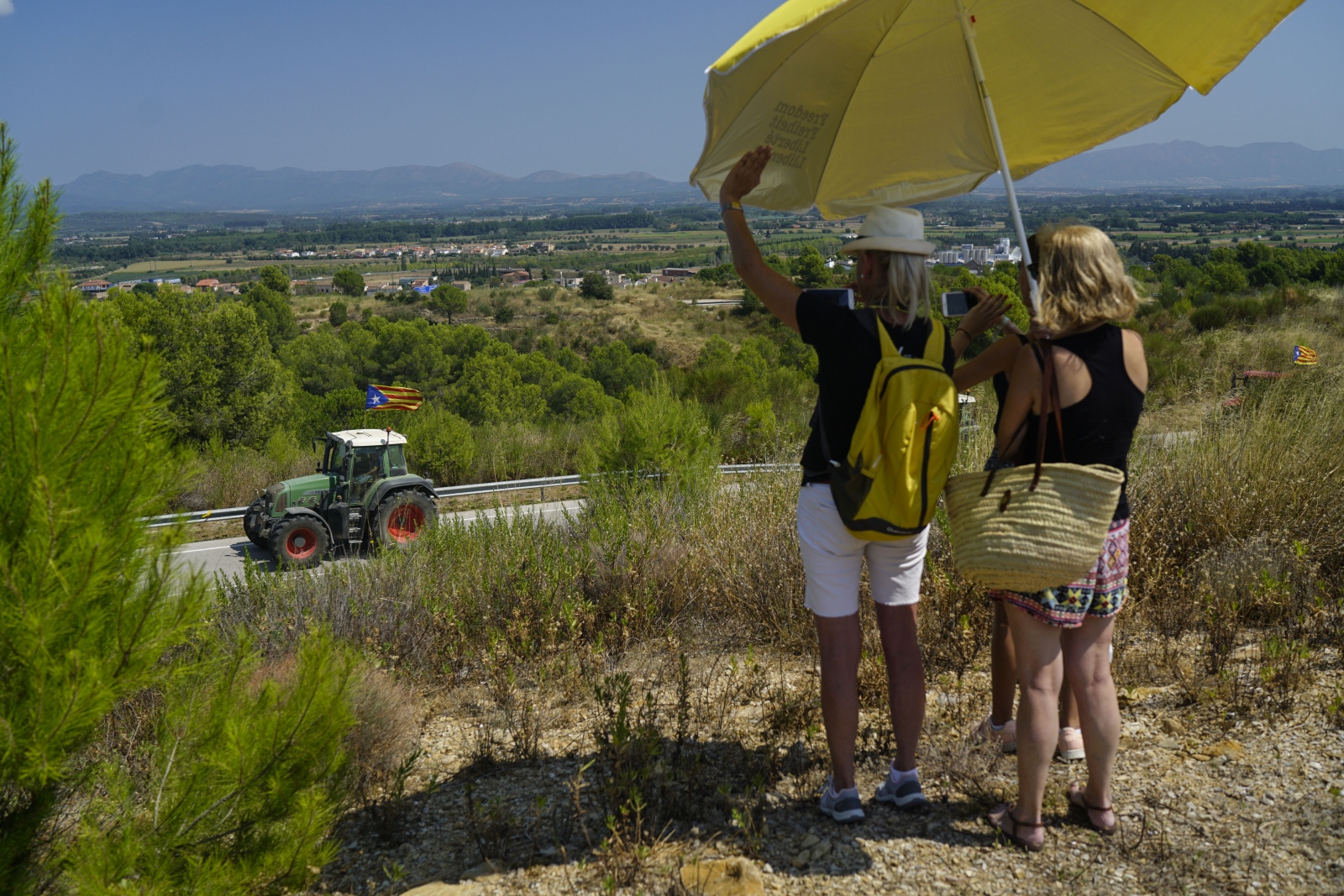 23 of 28 © 2020 Daniel Cole-ParéS
A tractor caravan organized by the Catalan Farmers Union arrives at the Puix de les Basses prison where ex-minister Dolors Bassa is held on charges of Rebellion against the Spanish state for her role in organizing the Catalan independence referendum, Aug. 22, 2018. 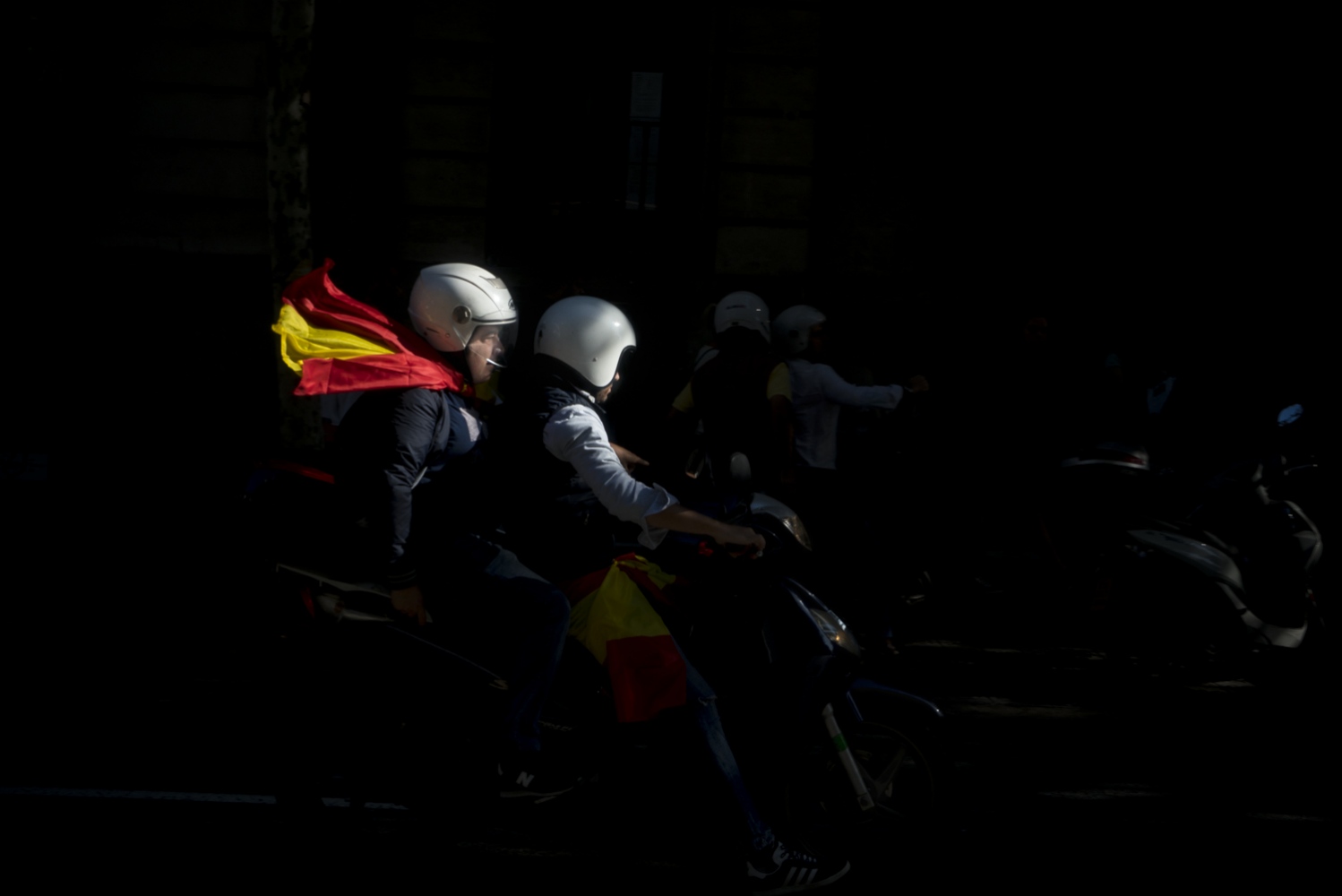 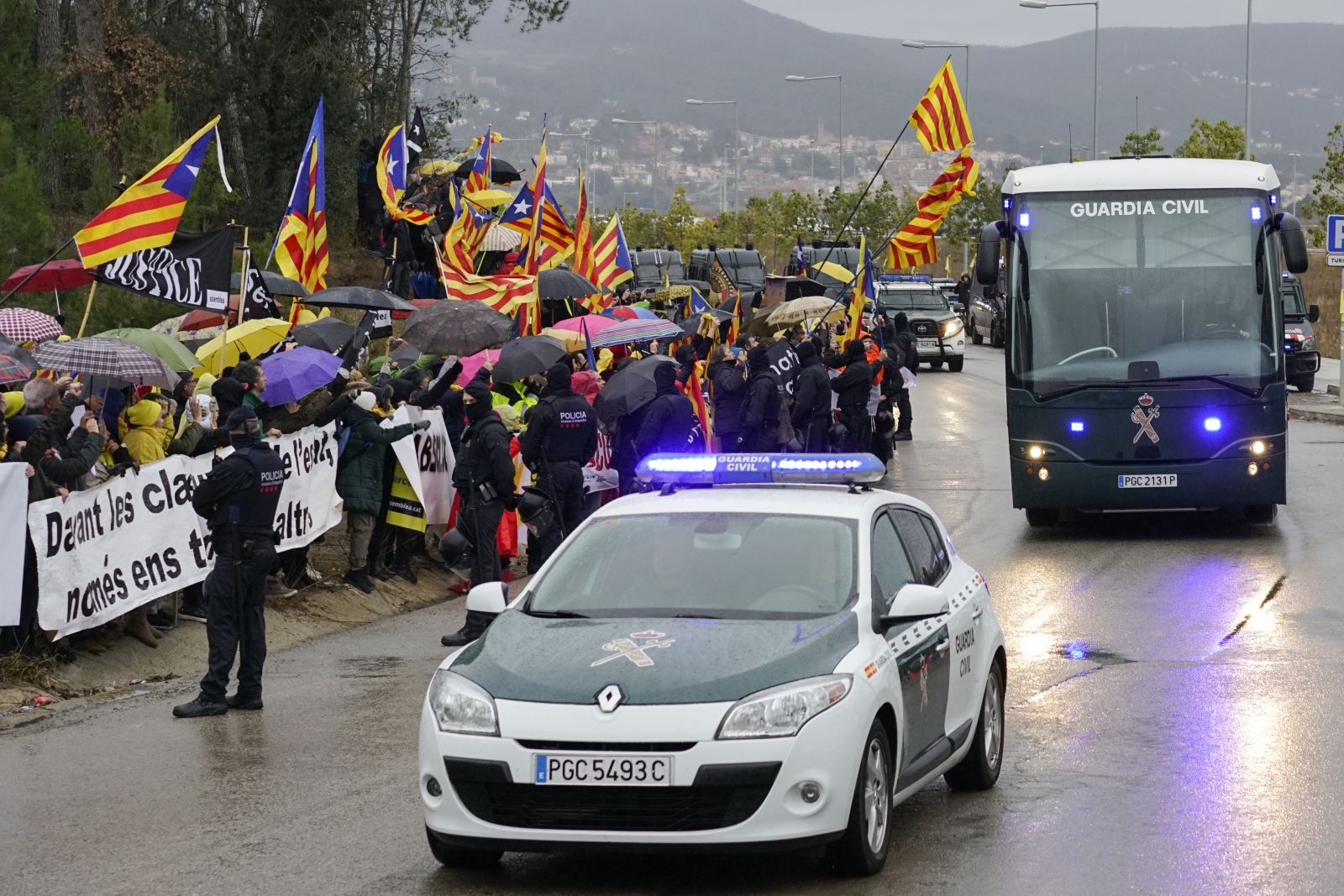 25 of 28 © 2020 Daniel Cole-ParéS
(AP Photo/Daniel Cole)
Demonstrators wave esteladas or independence flags as a bus of the Spain's Civil Guard carrying the nine Catalonian politicians and activists, leaves the Brians II prison, in Barcelona, Spain, Friday, Feb.1, 2019. Spanish authorities transferred nine politicians and activists on Friday from prisons in Catalonia to the country's capital, Madrid, ahead of a high-stakes trial for their part in an attempt to secede from Spain. 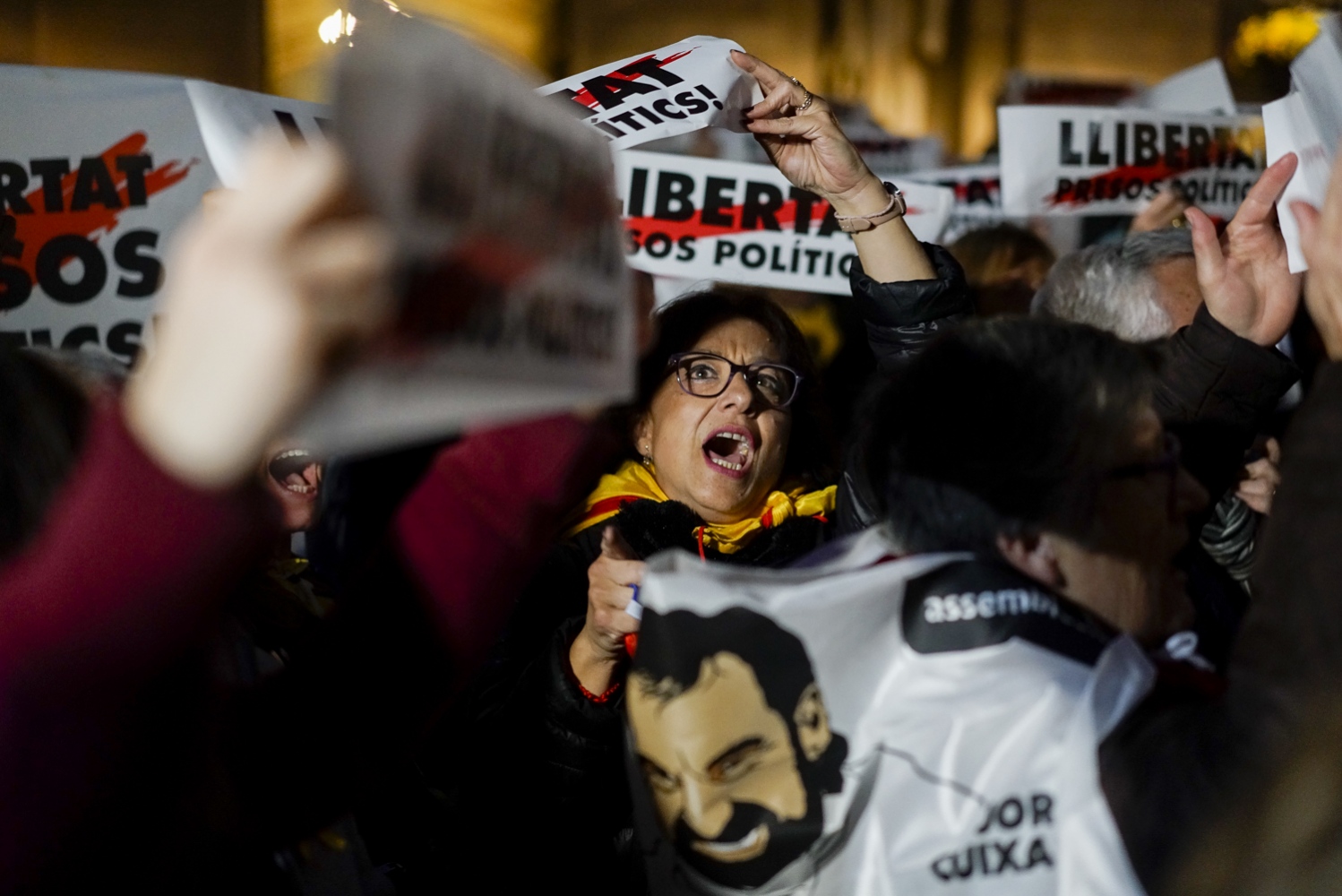 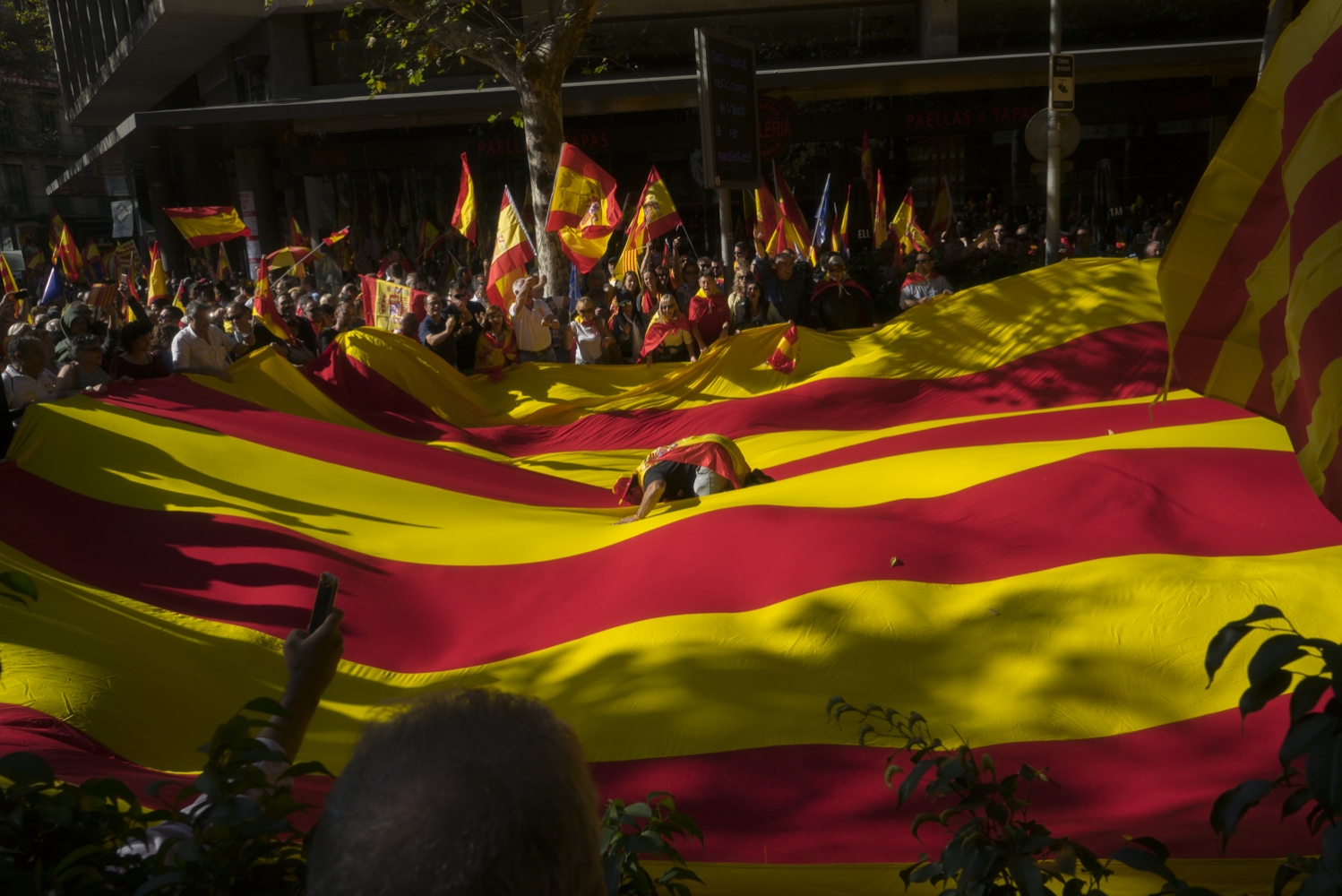 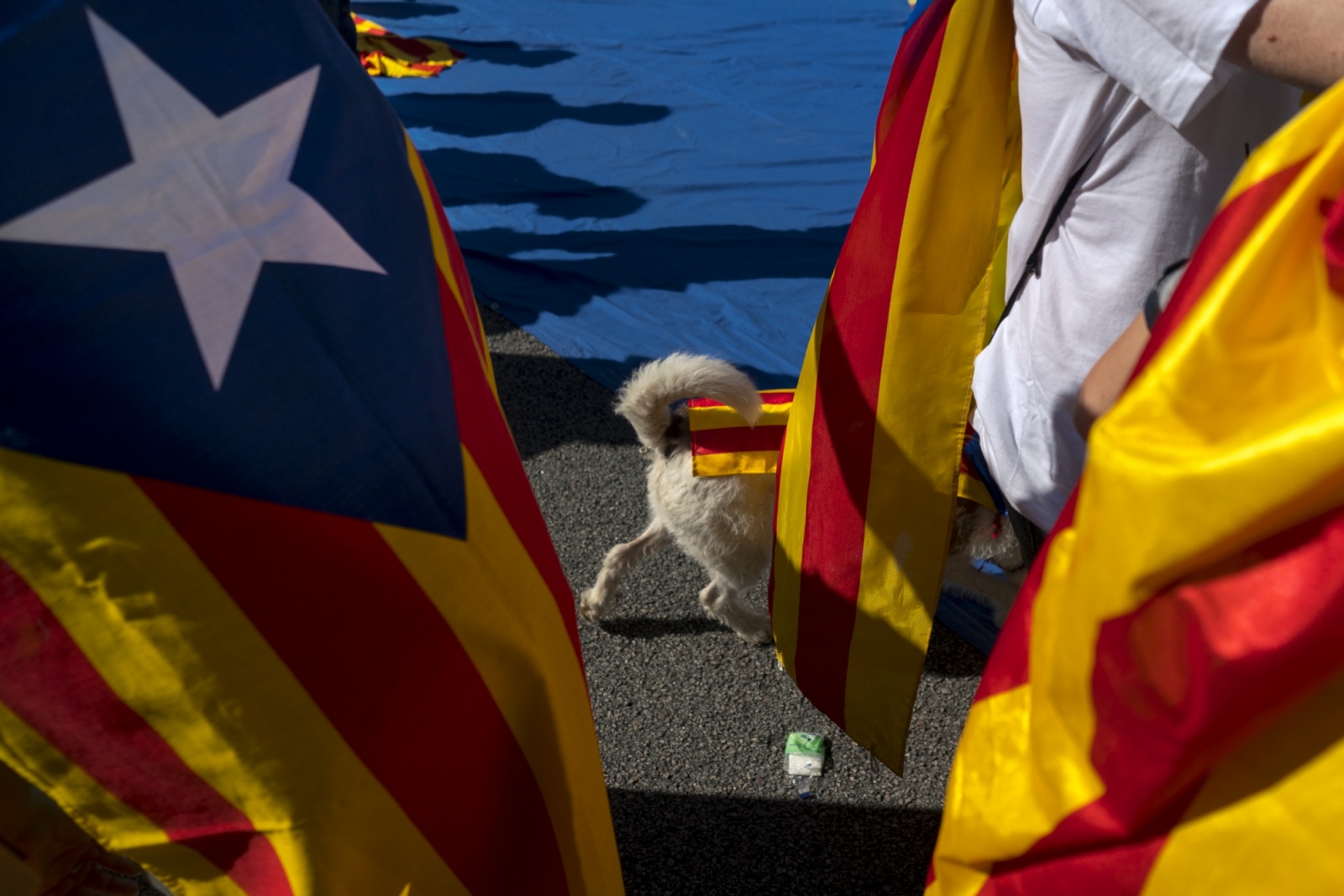