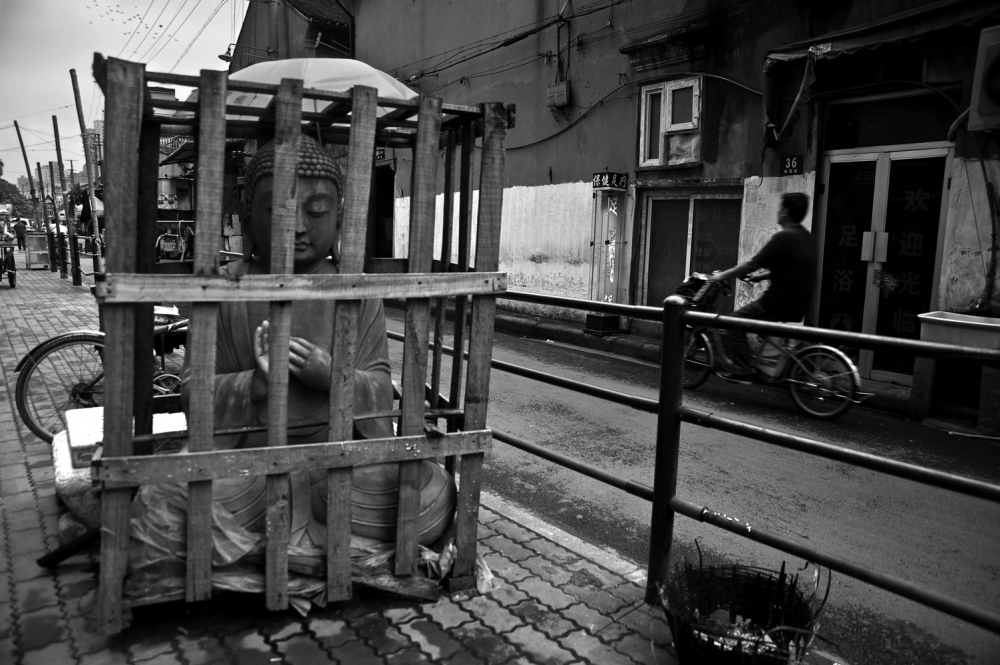 1 of 9 © 2022 Adrián Domínguez
The cult and religion are everyday practices in Chinese lifestyle, rituals begin from the morning and extend meals, gambling or business. 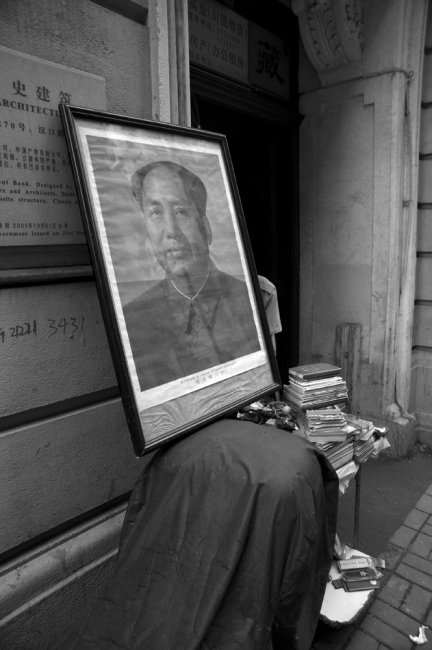 2 of 9 © 2022 Adrián Domínguez
Although socialist ideology leave China decades ago still present allusions to the leader Mao Zedong. Despite its imminent extinction, the culture of the old city is relatively unchanged. 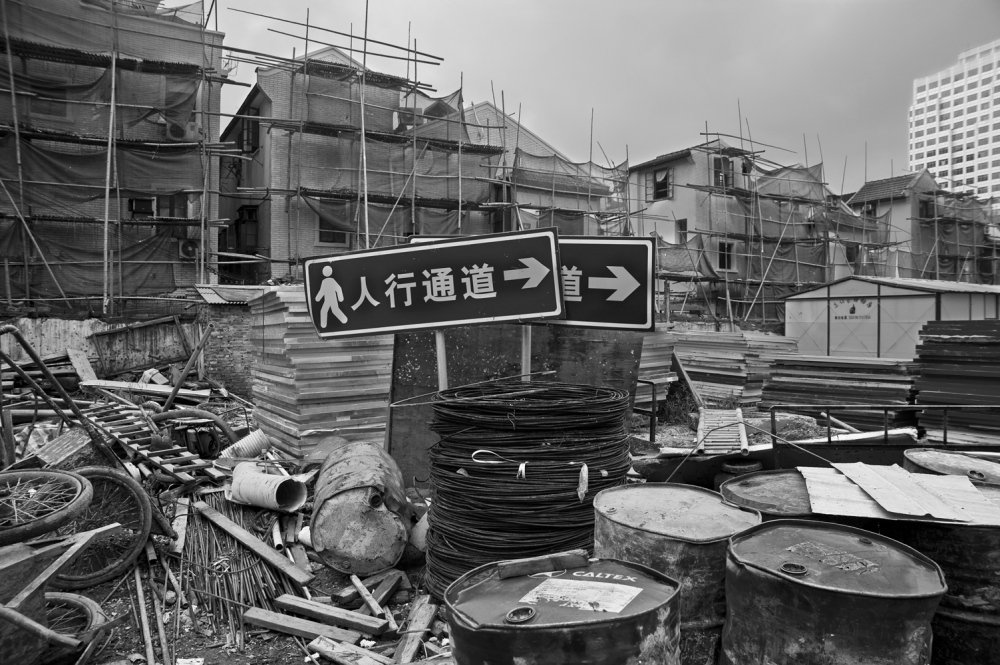 3 of 9 © 2022 Adrián Domínguez
For two decades Shanghai undergoes great changes, capital of reference in modern architecture and businesses worldwide. The Old City is being engulfed by the mass of skyscrapers, the Chinese government will keep some spaces just as historic represntation. 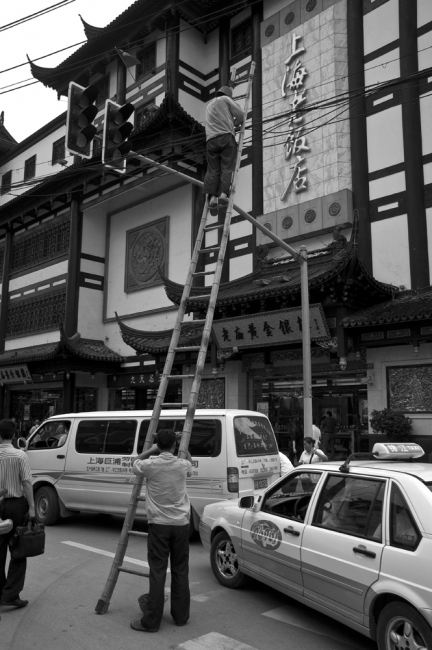 4 of 9 © 2022 Adrián Domínguez
In the capital of the modern world materials like bamboo are still used. 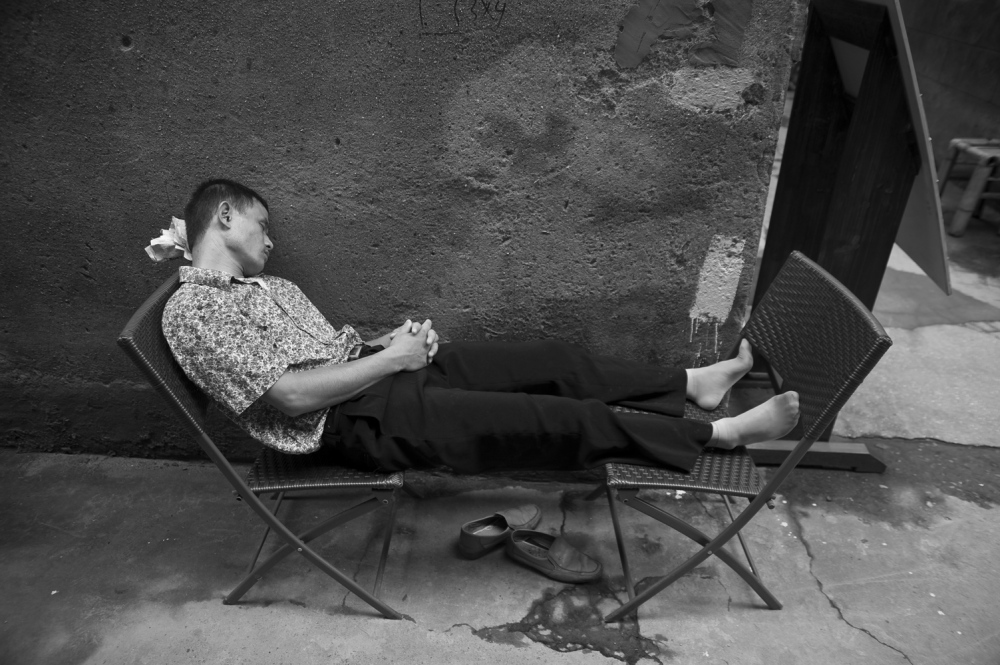 5 of 9 © 2022 Adrián Domínguez
In Old City, workers do long labours so they often make breaks throughout the day to eat or sleep. 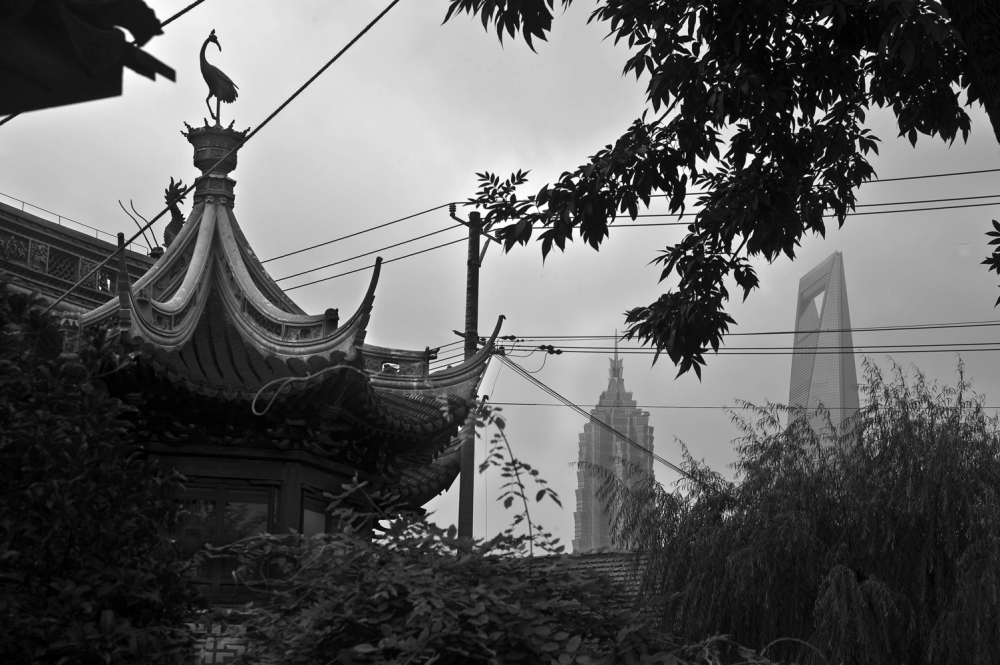 6 of 9 © 2022 Adrián Domínguez
One of the few exponents of Taoist culture remains timidly against the business development of Pudong.Â God's CityTemple, behind Mao Tower and World Financial Center. 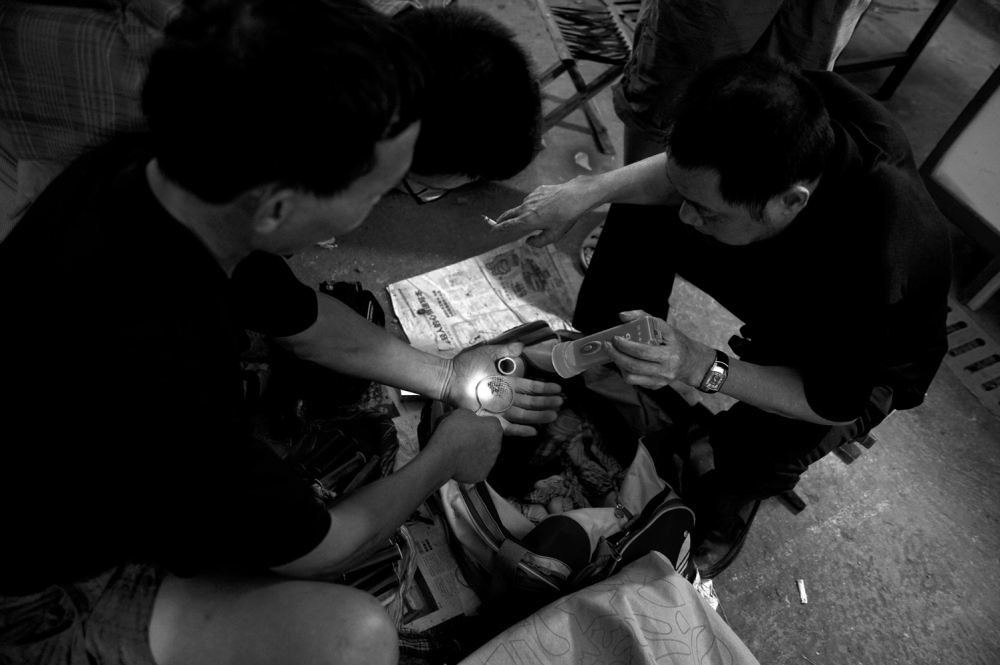 7 of 9 © 2022 Adrián Domínguez
Among the peculiarities in traditional culture are the fresh food markets with alive animals and exotic pets, with an exclusive Pets Market. 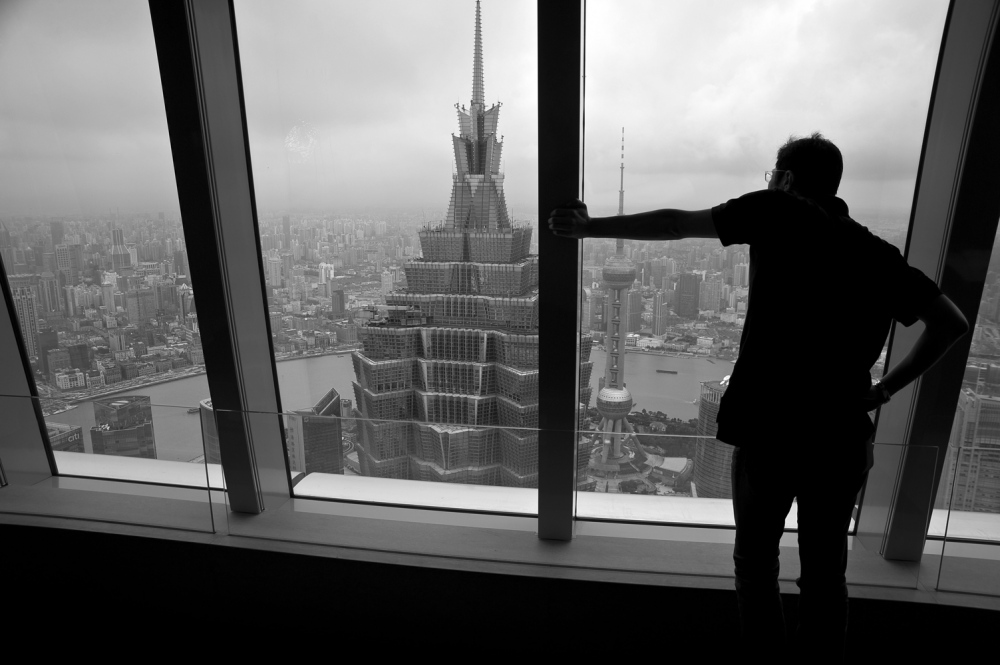 Shanghai is today one of the reference capitals on architecture and business around the world.Â View from Shanghai World Financial Center. 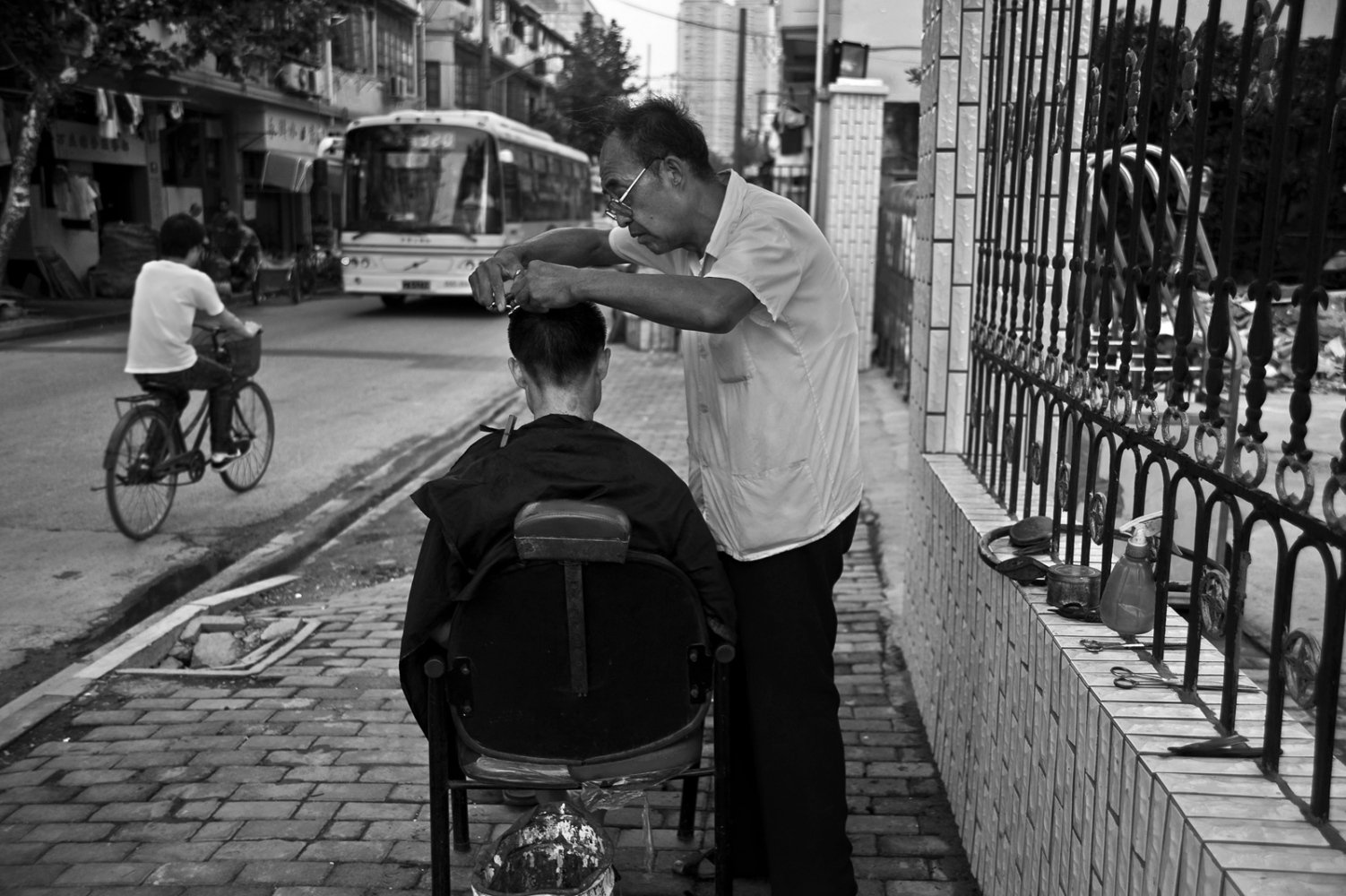 A small village (BCE) located along the Delta of Yangtze River, engaged in fishing and salt, is today the most populous city in China and the world's largest commercial port freight volume. So, since centuries main meeting point with the West.

<< Better City, Better Life >> proclaims the municipal slogan for the flourishing empire of luxury in the new Market Dynasty. There are enough historical traces in other cities so Shanghai could undergo to the banner of 'something new', no matter tear it down and build it again, as it happened with the 'opium's concessions', European colonization and the so-called exotic East Paris. China is today the first luxury consumer in the world (Fortune Character Institute). Since then, the global business elite stands resplendent in Pudong, the new district of Shanghai built in just 20 years.

Little remains of Ming Dynasty designs (1368-1644), described by some historians as <<one of the greatest eras of disciplined government and social stability in human history>>, or the Shikumen architecture, traditional of Shanghai that (after concessions of the First Opium War) combines western and traditional architecture of the low Yangze, based on their social customs. These buildings represented over half of the homes in the city at its peak (XIX) with buildings of two or three floors with a small front yard, houses support each other, being flanked by narrow alleys or longtang. A lifestyle extinct and relatively unchanged where the routine passes in the street, from the daily grooming, food, leisure or sport, in the streets hangs laundry, resting and playing. The austere little house spaces for night shelter and a kitchenette, life is given outside; at parks, at the streets and lontangs, exotic pets and striped pijamas make navigating between cultures, that will be engulfed soon in the heart of the megapolis of the future. Since the liberation of socialist economic Shanghai takeoff has been meteoric, and now is one of the capitals reference in architecture and business around the world, which does not harmonize too much with the ruins of the past. The old Shanghai disappears.

By Adrián Domínguez / Spain — Today, the interpretation of rural and urban spaces depends on arbitrary delimitations based on size and..
Jan 21, 2016

By Adrián Domínguez / Iberian Peninsula — The struggle to rescue European bison ( Bison bonasus ) from extinction began about 80 years ago, after..
Dec 14, 2017

By Adrián Domínguez / Galicia, Spain — ONCE UPON A TIME TWO SISTERS OFFERED TO A CLERGYMAN TWO MARES -BESTAS- IF DEFENDING THEM OF PEST CONTAGION..
Jul 7, 2016

By Adrián Domínguez / Almería, Spain — More than fifty years after Palomares (Almeria, Spain) nuclear disaster there are still many doubts about..
Apr 8, 2016

By Adrián Domínguez / Sichuan, China — Many people alive today carry genes from human species other than Homo sapiens (the result of ancient..
Jun 18, 2016

By Adrián Domínguez / Celtiberian Mountain Range, Iberian Peninsula — The European Union considers uninhabited a territory when it has less than eight inhabitants per square..
Jul 6, 2016