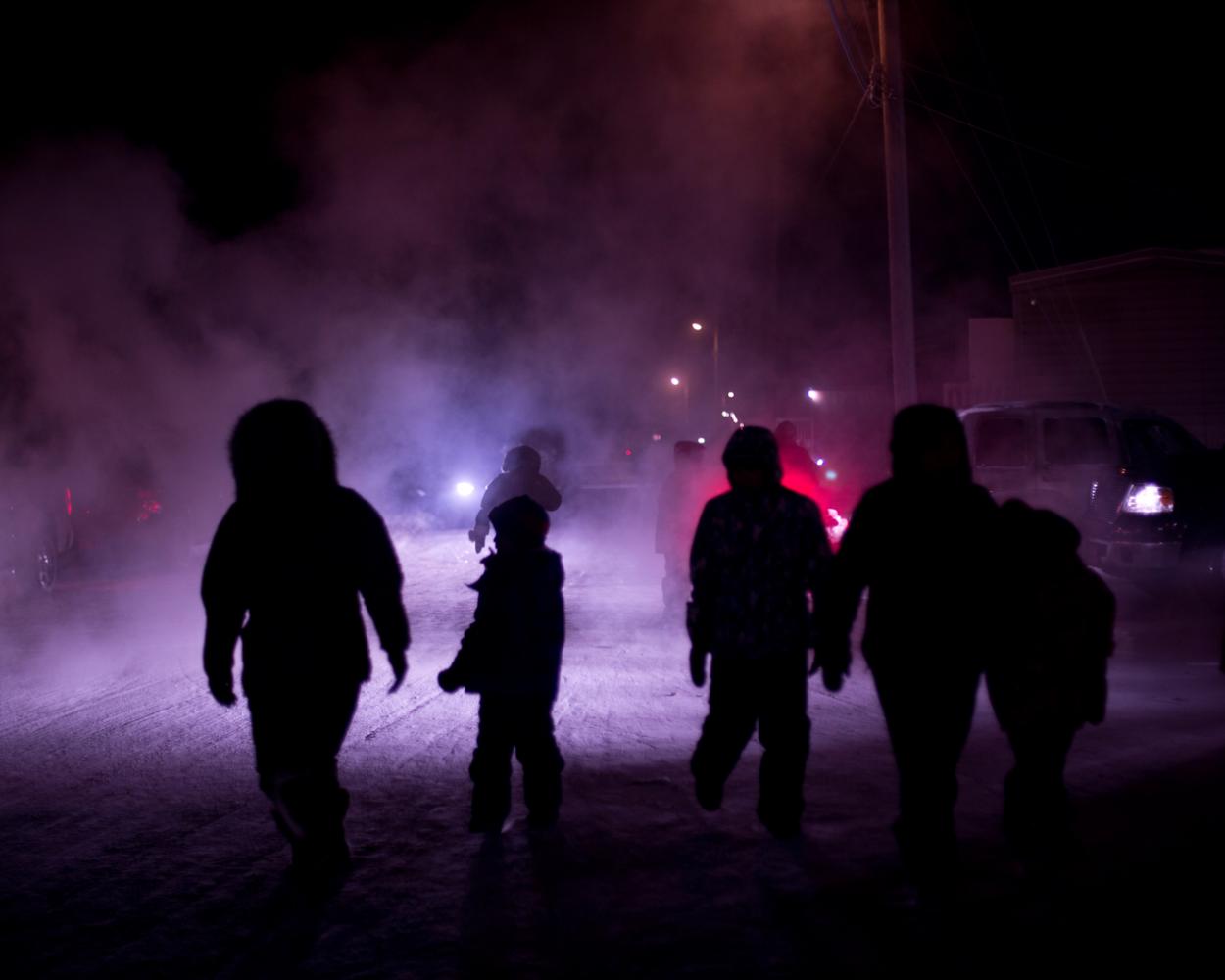 1 of 16 © 2022 Acacia Johnson
On New Year's Eve, residents of Arctic Bay exit the community hall to watch the fireworks over the sea ice. 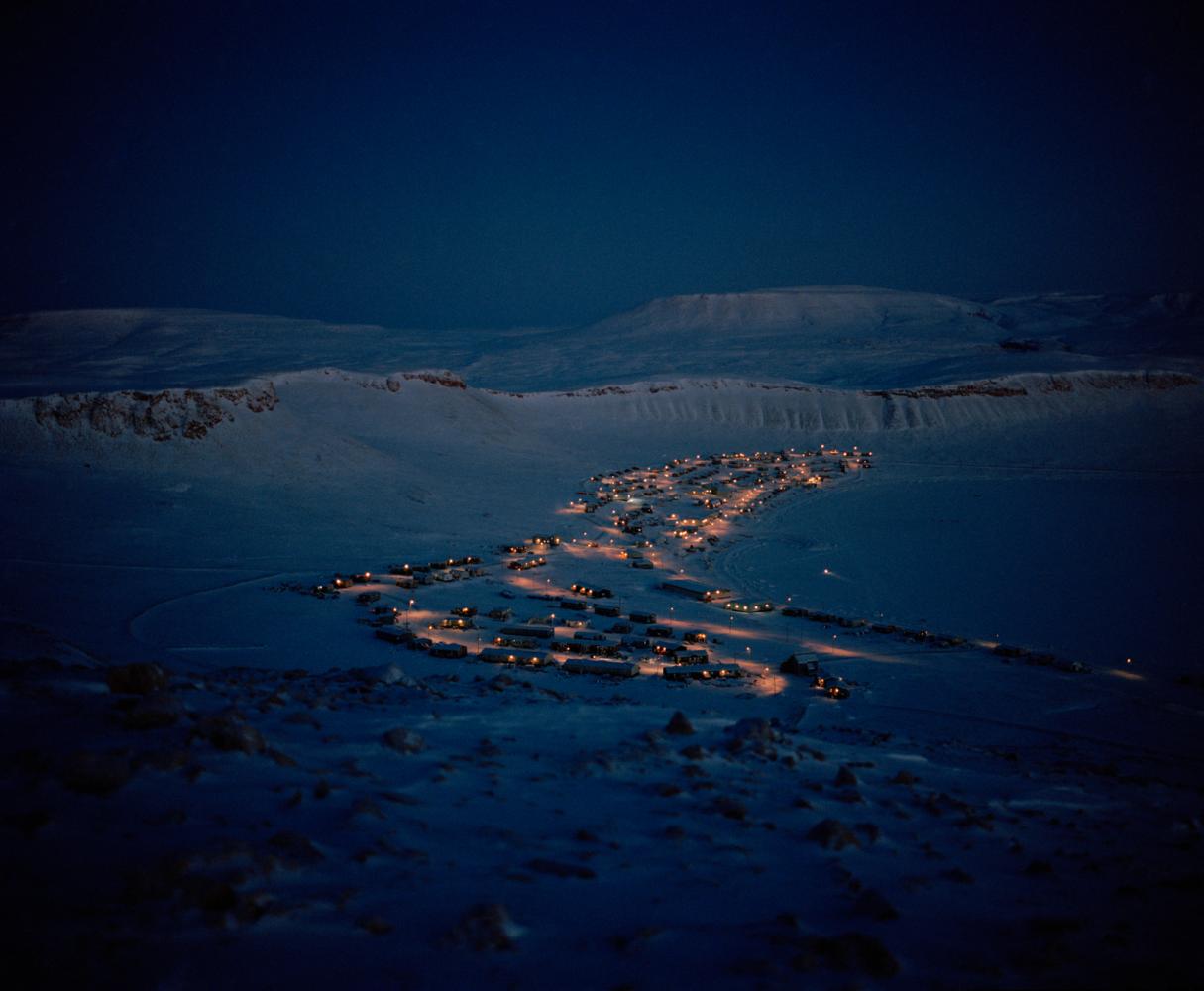 2 of 16 © 2022 Acacia Johnson
The community of Arctic Bay, Nunavut, around midday in December. 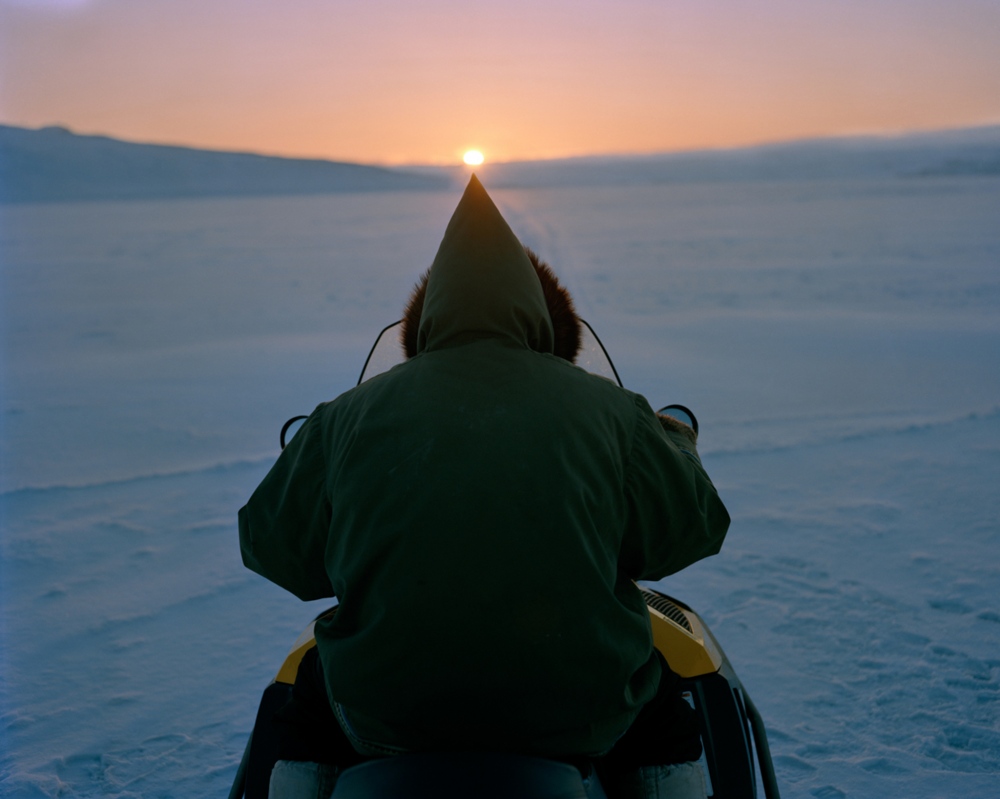 3 of 16 © 2022 Acacia Johnson
As the sun sets over the horizon for the last time for the next three months, Joe Kigutaq drives his skidoo home from his job as a polar bear monitor at a mine facility. 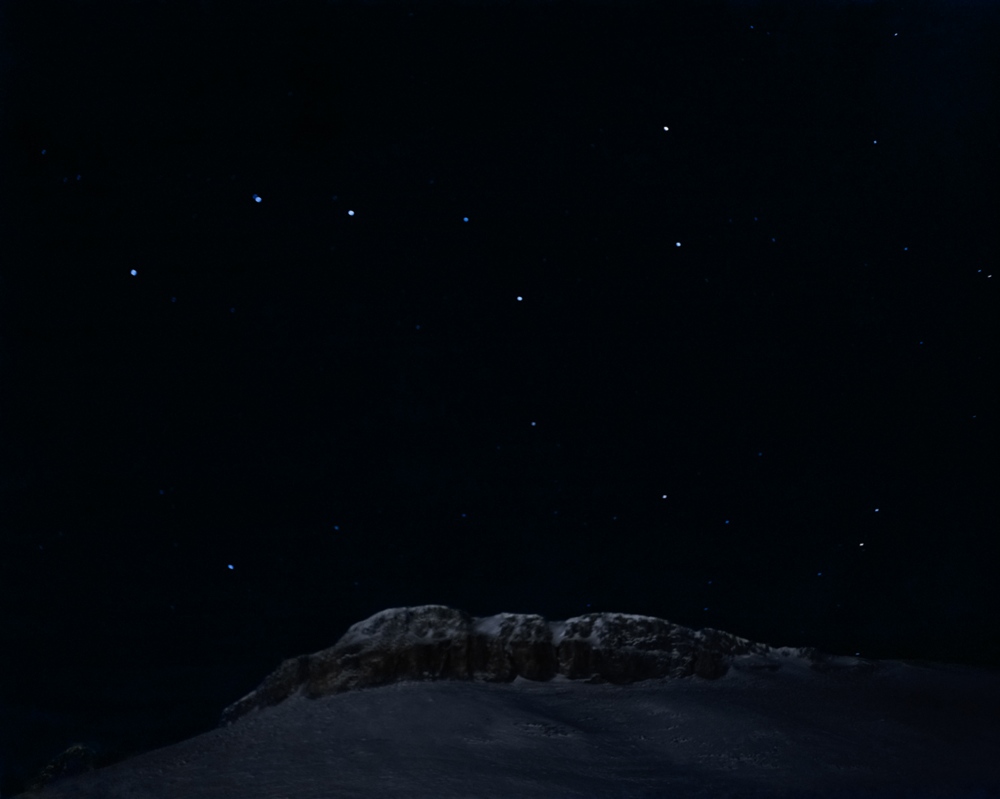 4 of 16 © 2022 Acacia Johnson
The stars of the dipper hangs over the mountains in Arctic Bay. In the darkest part of the winter, stars can be seen at noon. 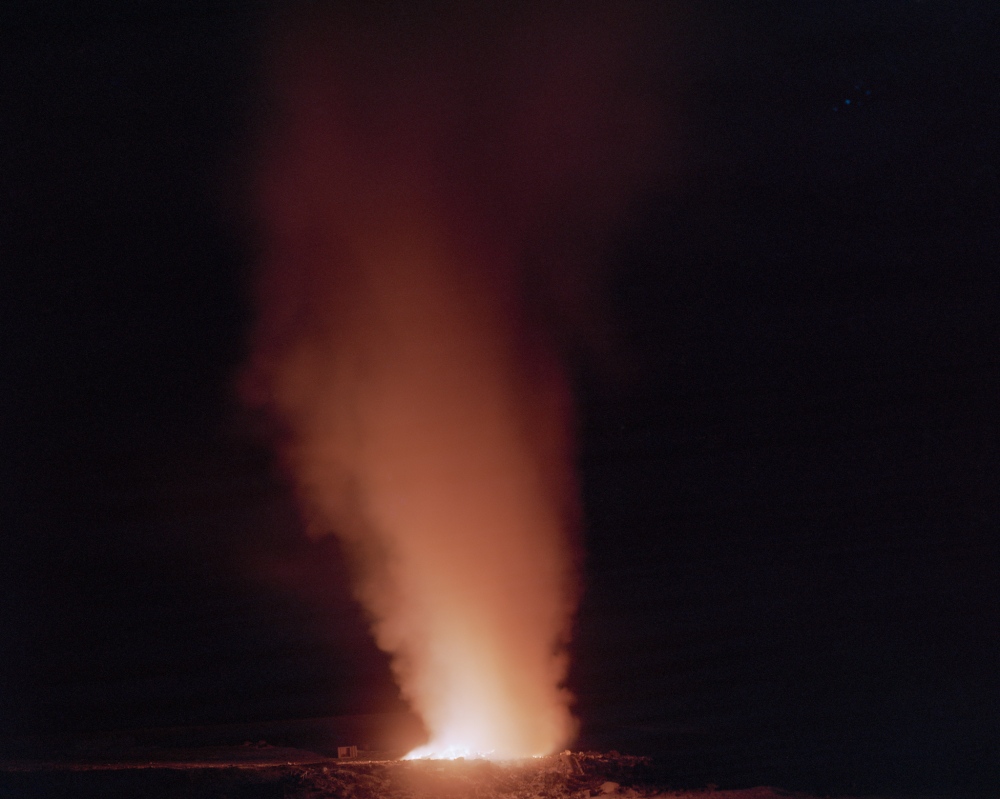 5 of 16 © 2022 Acacia Johnson
Trash is burned at the dump outside of Arctic Bay, Nunavut. Since the community has few other waste disposal alternatives, years' worth of discarded items make the dump a useful place to scavenge for things that might be costly to have shipped up from the South. Several couples in Arctic Bay have built cabins exclusively with materials found at the dump – down to interior paint, windows, and matching curtain rods. 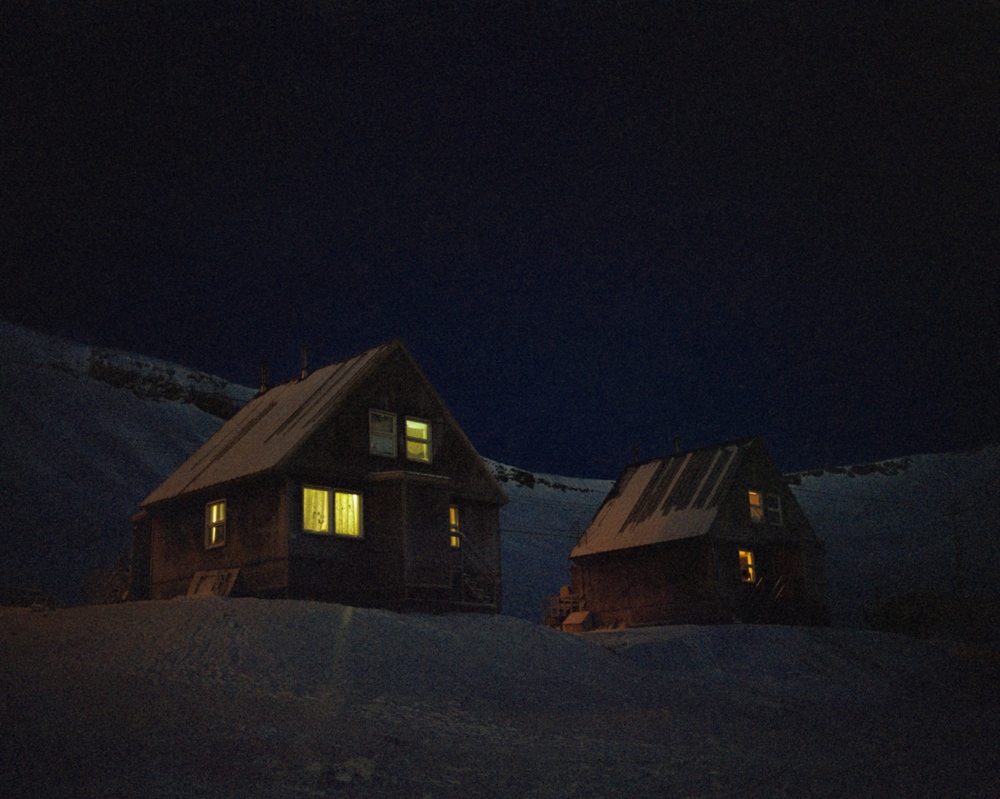 6 of 16 © 2022 Acacia Johnson
Houses in Arctic Bay glow in the darkness of a December afternoon. 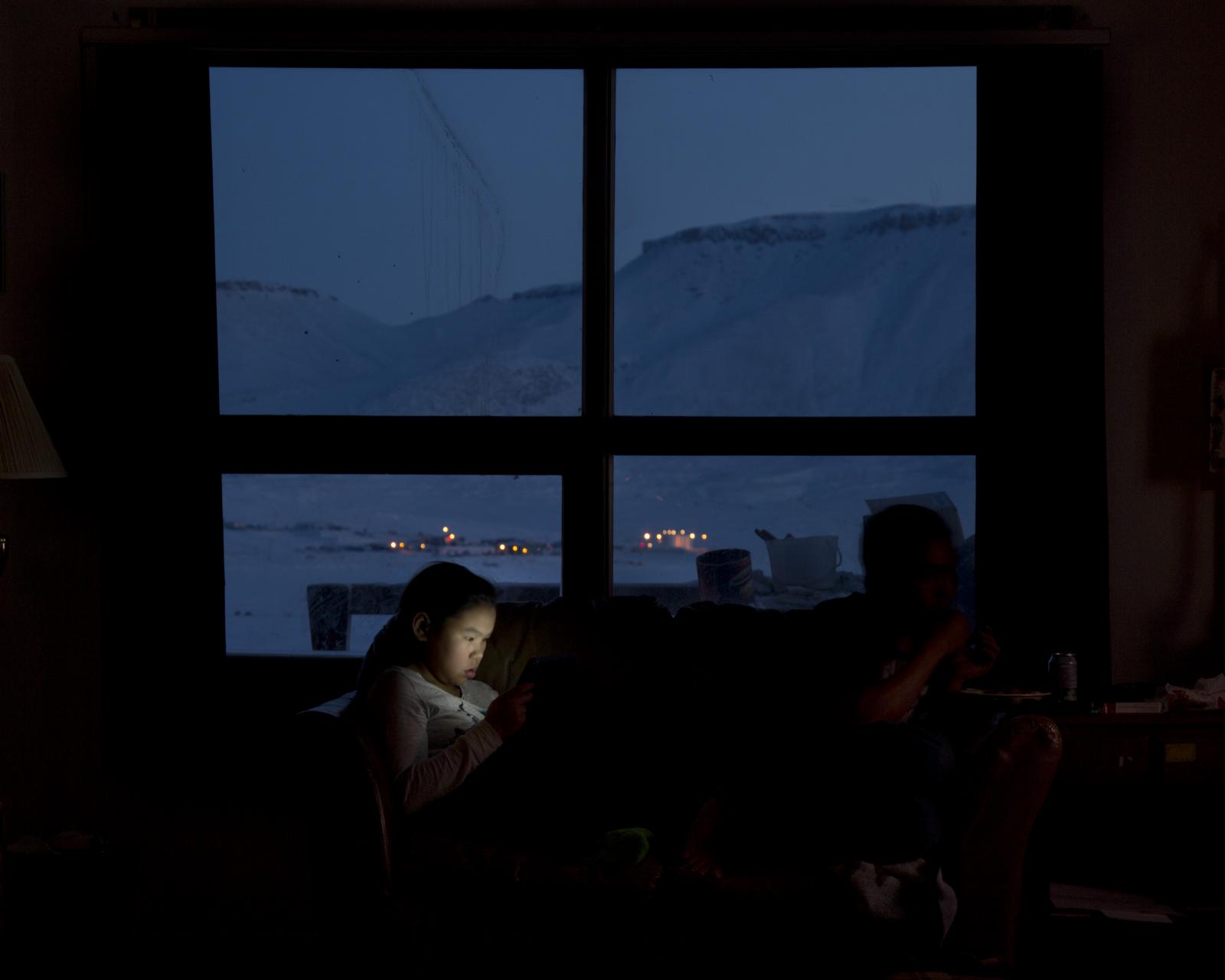 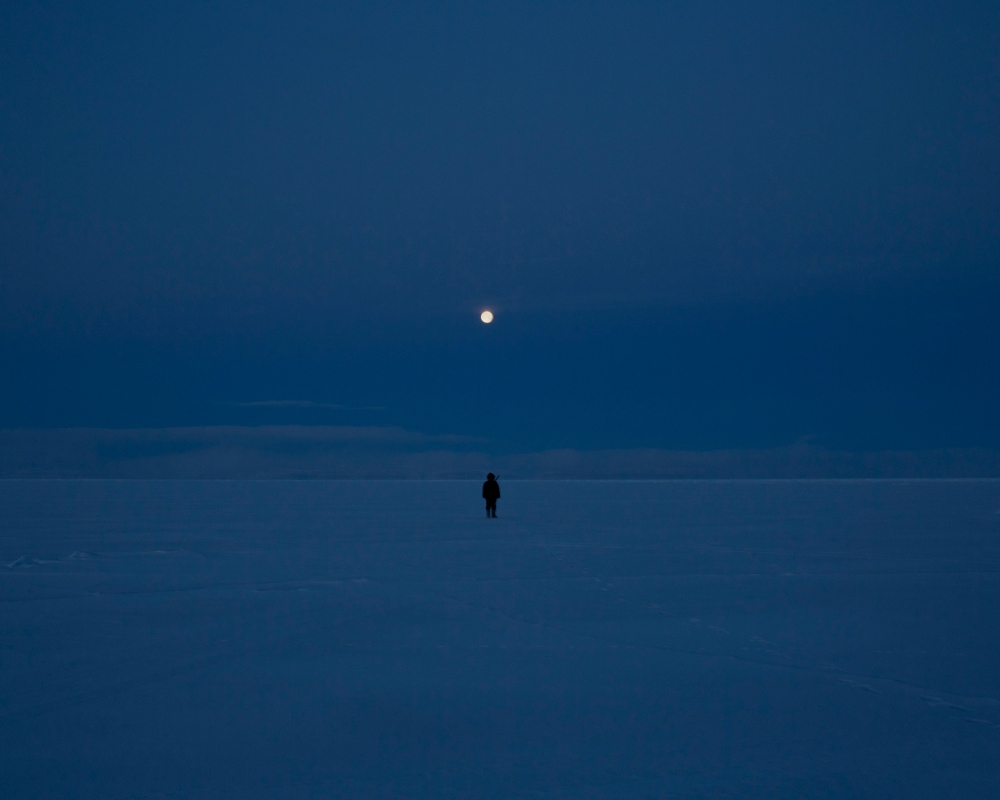 8 of 16 © 2022 Acacia Johnson
Joe Kigutaq looks for polar bear tracks under a full moon. Twice a week, he drives his skidoo 30 km to Nanisivik, a former mine facility, to check that polar bears have not tampered with it while it is not in use. 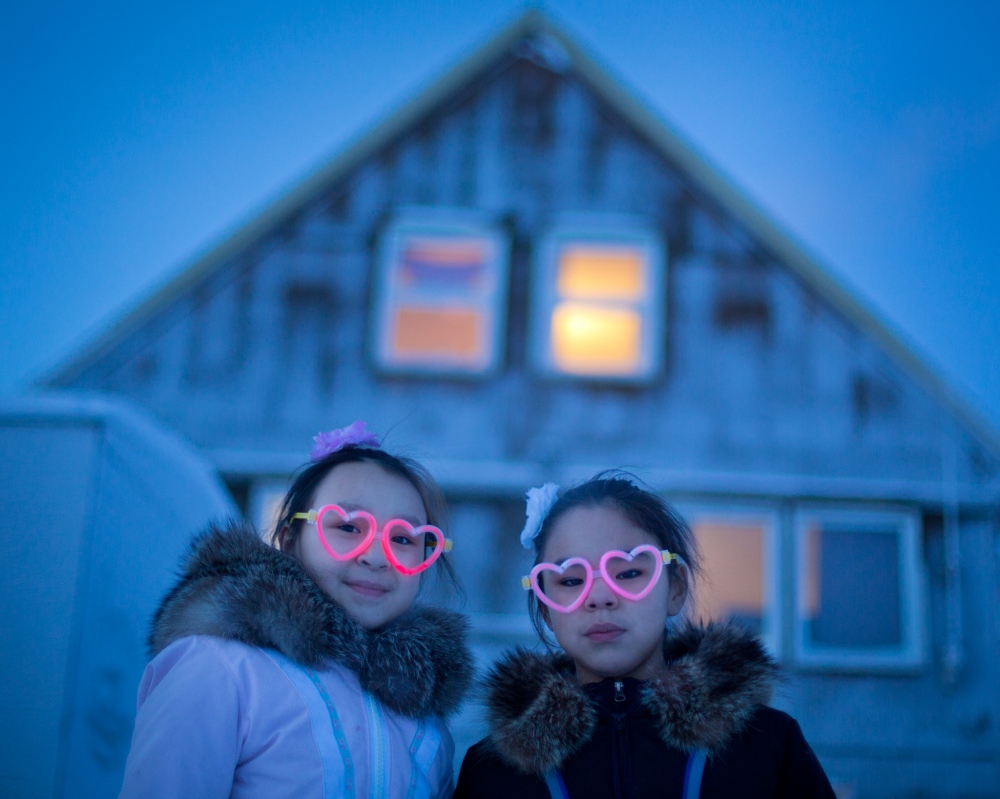 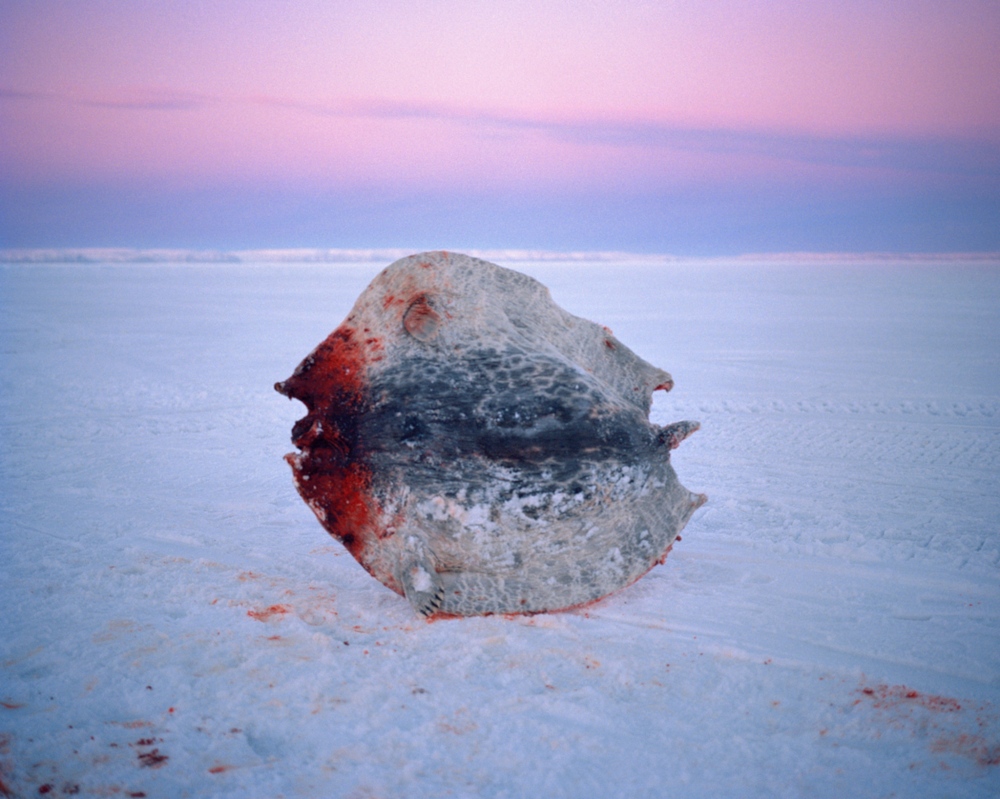 10 of 16 © 2022 Acacia Johnson
A frozen ringed seal skin found on the sea ice near Victor Bay. It was suspected to be an alpha male, which can exude such a powerful scent that its skin is not usable for outerwear. Otherwise, the entire seal would be used. 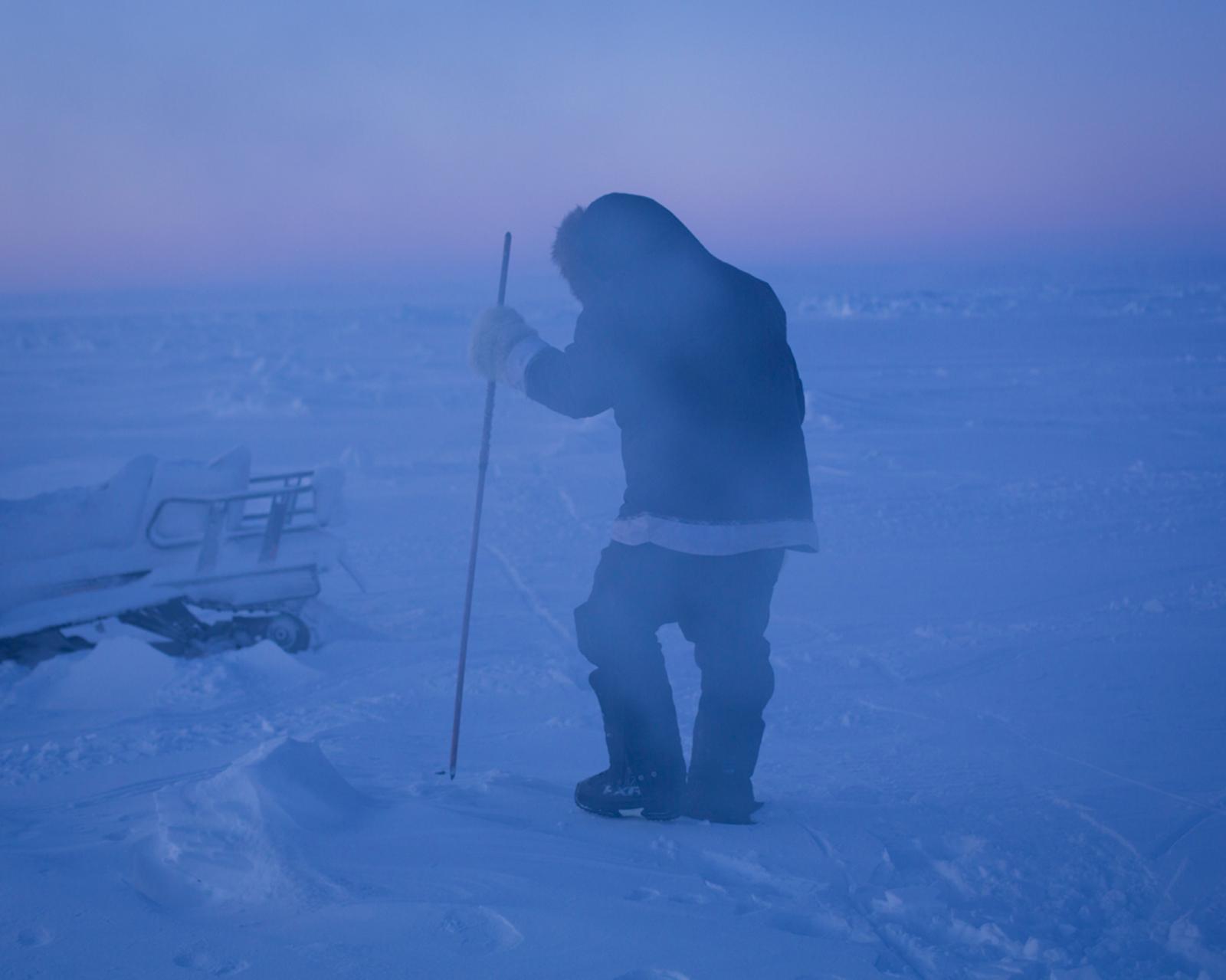 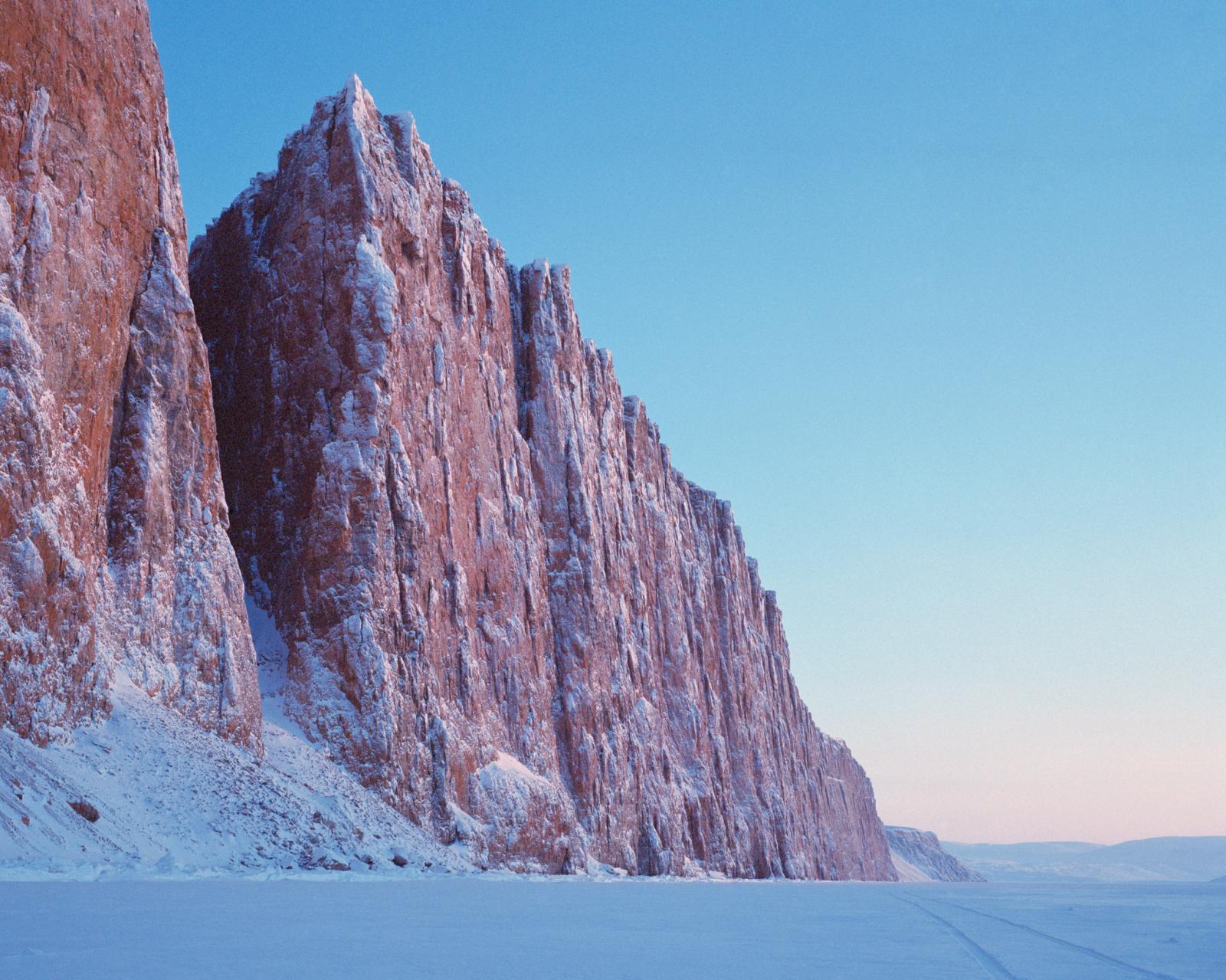 12 of 16 © 2022 Acacia Johnson
Dramatic cliffs rise from the sea ice just outside of Arctic Bay. 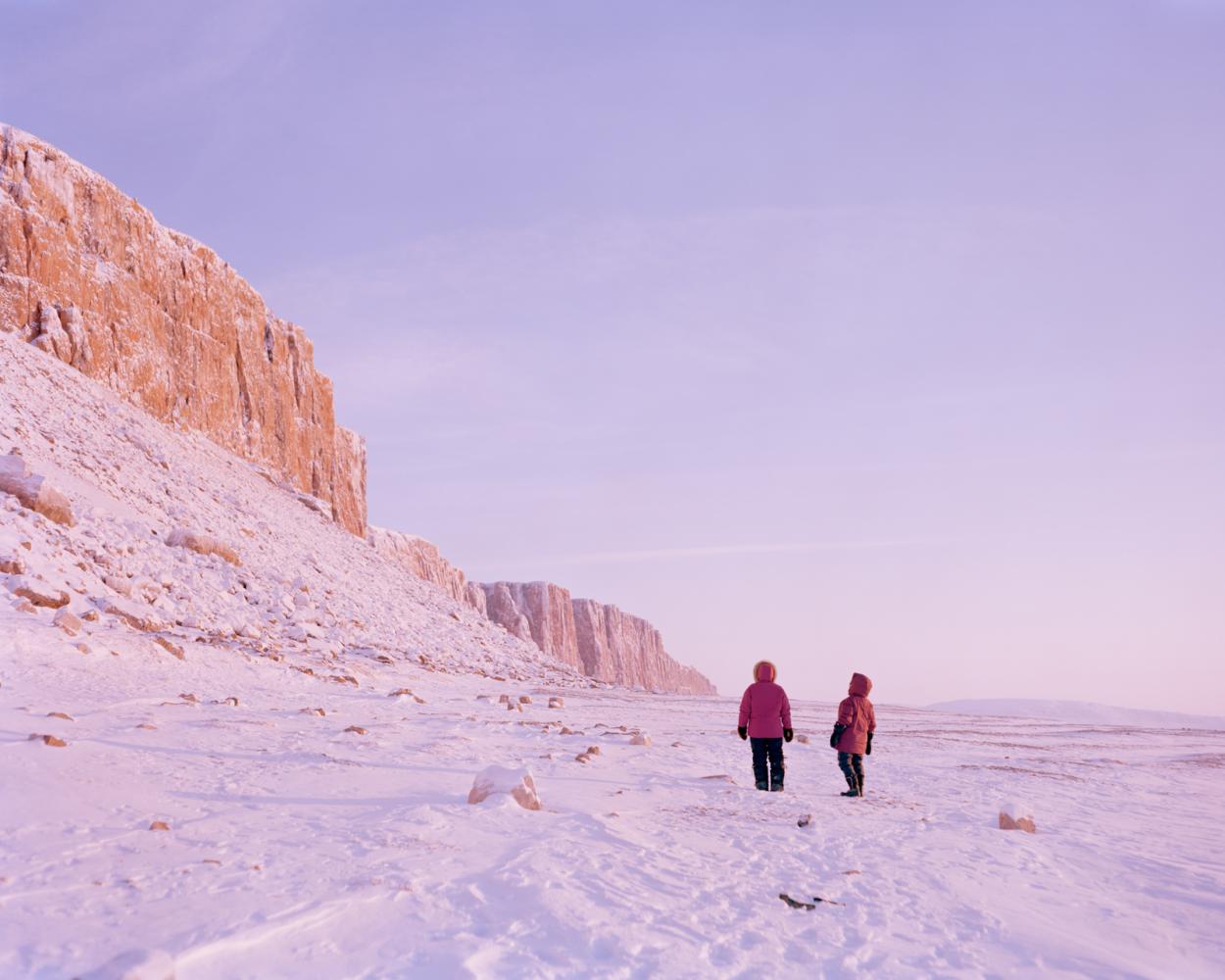 13 of 16 © 2022 Acacia Johnson
On the edge of the sea ice, Tagaaq Tatatoapik accompanies an Inuit elder to the coastal site near Arctic Bay where she was raised in an outpost camp as a child. 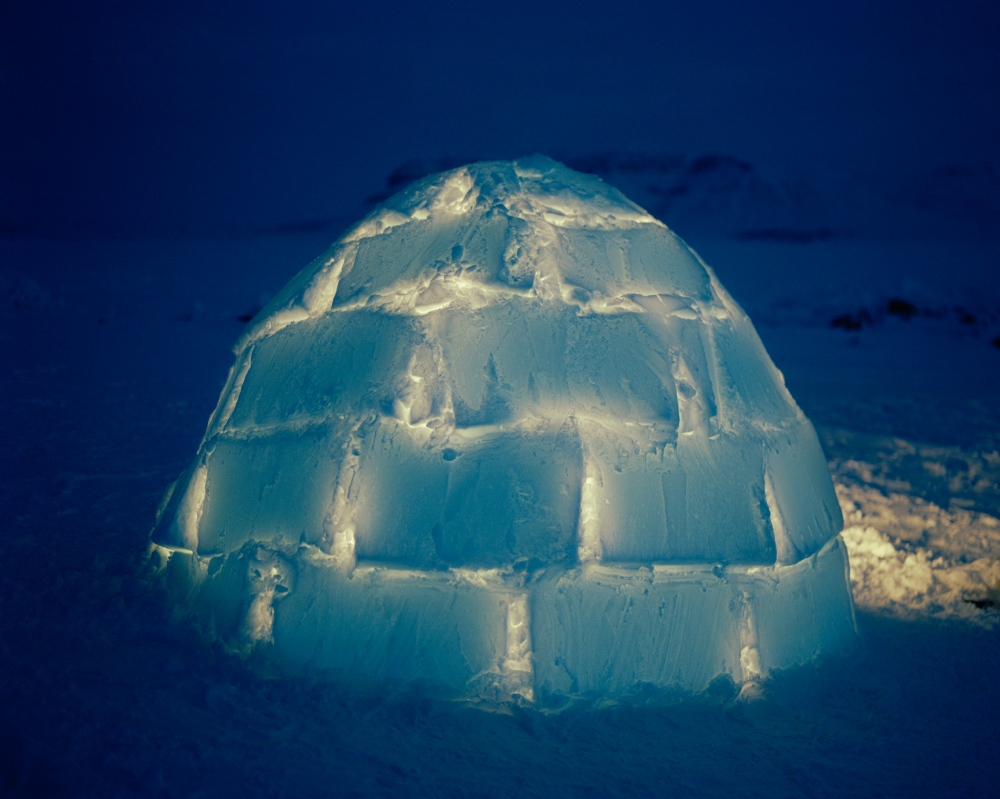 14 of 16 © 2022 Acacia Johnson
An iglu glows through the afternoon on the darkest day of the year. Jack Willie, a photographer in Arctic Bay, asked his uncle to help him build one, using blocks of wind-packed snow cut with a snow knife. While no longer frequently used, many Inuit know how to build iglus for survival shelters, should bad weather conditions arise when hunting out on the land. 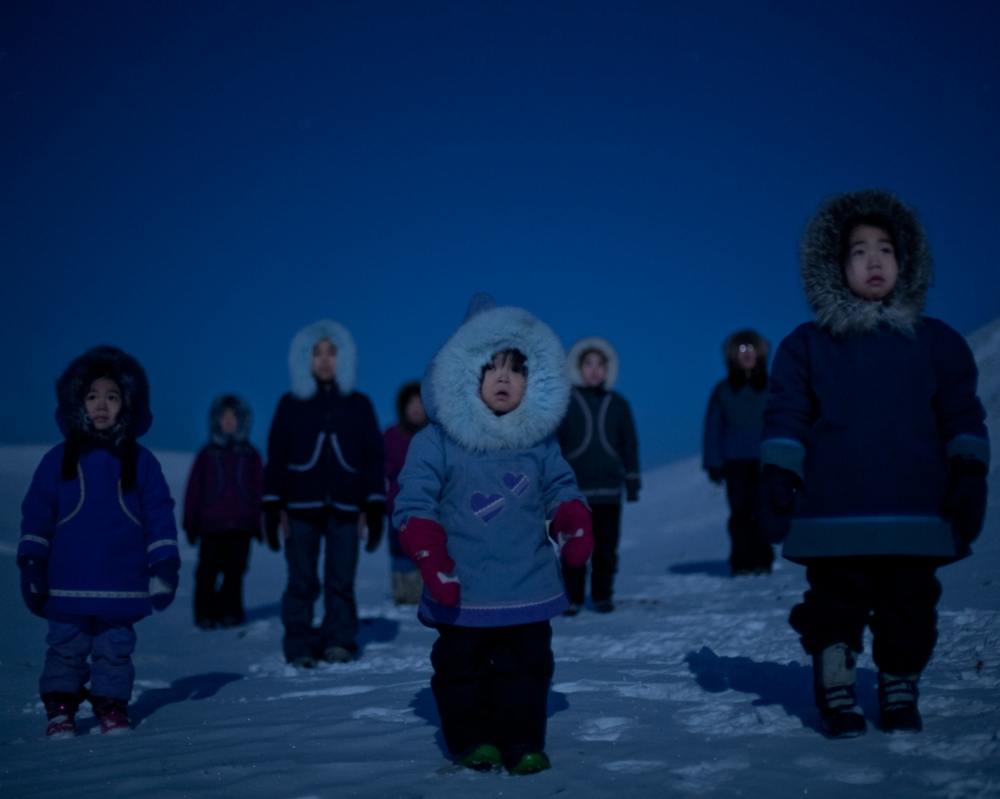 15 of 16 © 2022 Acacia Johnson
The Tatatoapik family takes in the light of a particularly bright full moon in February. In the depths of winter, it is safe to drive a truck or SUV out onto the sea ice and into the mountains, as the family had done for this occasion. 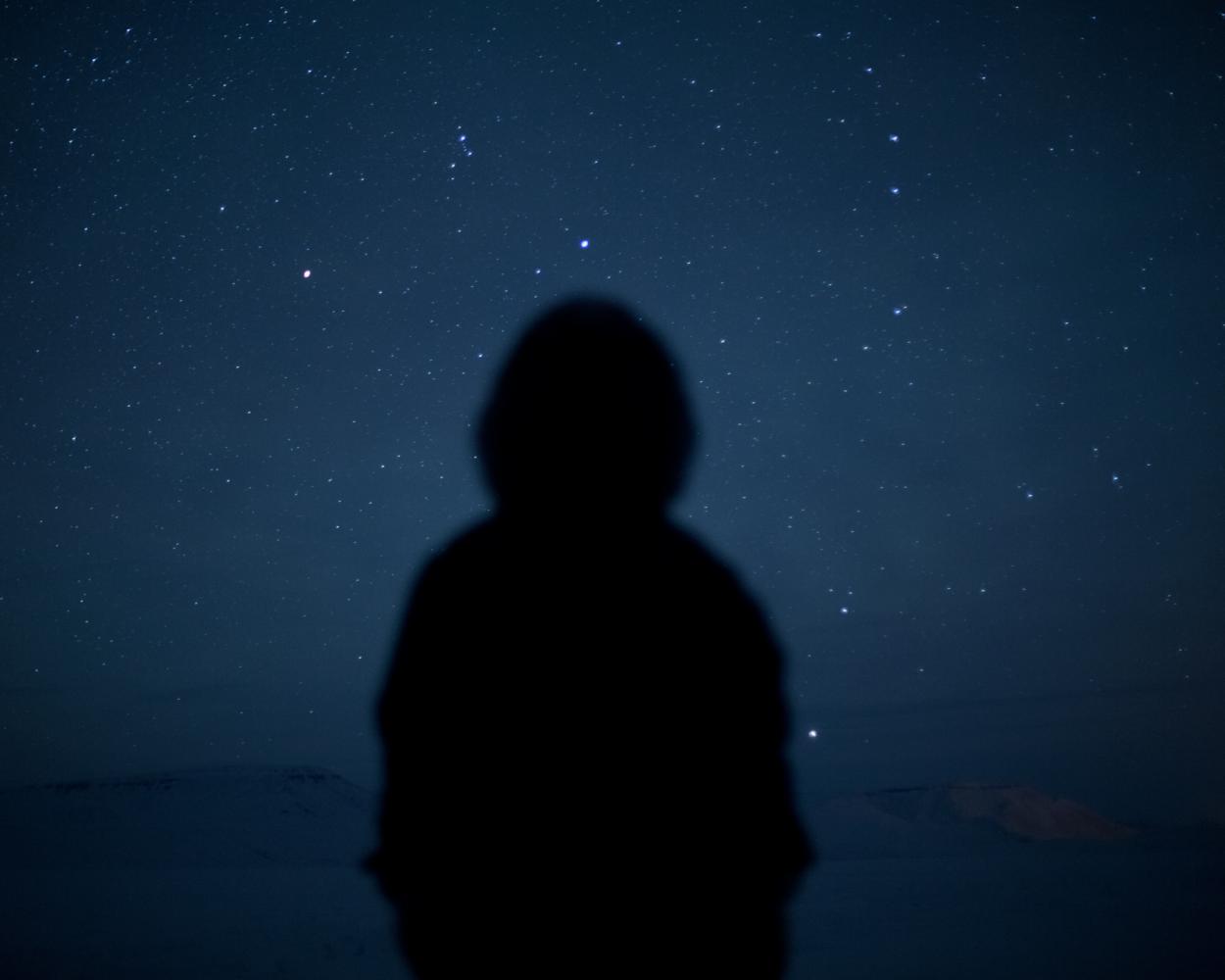 Winter in the Arctic: vibrant, pulsing. The throb of club music pours from the community hall, streets alive with the roar of skidoos and the cries of dog teams. Faces illuminated by the eerie glow of iPad screens in this polar night, the ding of text messages, the glow of the moon, the buzz of televisions and sewing machines and the silent stillness of hunters waiting, waiting. Feasts of walrus, seal and Coca-Cola; everyone talking about the land, returning to the land. Dancing, praying, hunting, sewing, playing games, telling stories, passing time. Waiting for spring, for the return of life - yet everything continues, even in darkness.

The north of Baffin Island, in the Canadian territory of Nunavut, is one of the coldest inhabited regions on earth. For nearly 5,000 years, the Inuit have lived a nomadic lifestyle in this landscape, subsisting off of the land and the sea until the 1950s. Communities today navigate shifts between the lifestyles and values of elders raised in a traditional hunting society, and the young generations growing up in the wake of colonization, with social media and access to the Internet.

Photographed over four months in the community of Ikpiarjuk (Arctic Bay), Nunavut in 2014-15, Under the Same Stars celebrates the vibrancy of community life and the Arctic winter landscape during the darkest time of the year.

This project was funded in part by a grant from Fulbright Canada, the Fulbright Canada-RBC Eco-Leadership Program, and the 83 backers of a Kickstarter campaign in summer 2014.

My deepest gratitude goes out to the people of Arctic Bay for welcoming me with such warmth and openness into their lives, and for making this project possible. Special thanks to Sheba Ejangiaq, Joseph Kigutaq, Clare Kines, the Tatatoapik family, Darcy & Susan Enoogoo, and countless others. In fond memory of Peugatuk Ettuk.

By Acacia Johnson / Alaska — For decades, the wilderness of Southwest Alaska has been the subject of a heated controversy over a..
Feb 25, 2020

By Acacia Johnson / Walrus Islands State Game Sanctuary — The first rays of sun are breaking over the tundra cliffs, the air is alive with the cries of wheeling..
Oct 18, 2021

By Acacia Johnson / Anchorage, Alaska — These images are a meditation on the boreal landscape of Alaska, my childhood home. In the Far North, a..
Jun 20, 2014

By Acacia Johnson / Iceland —   Polaris  is an exploration of otherworldly occurrences in the wilderness of Alaska and Iceland...
Jan 8, 2014