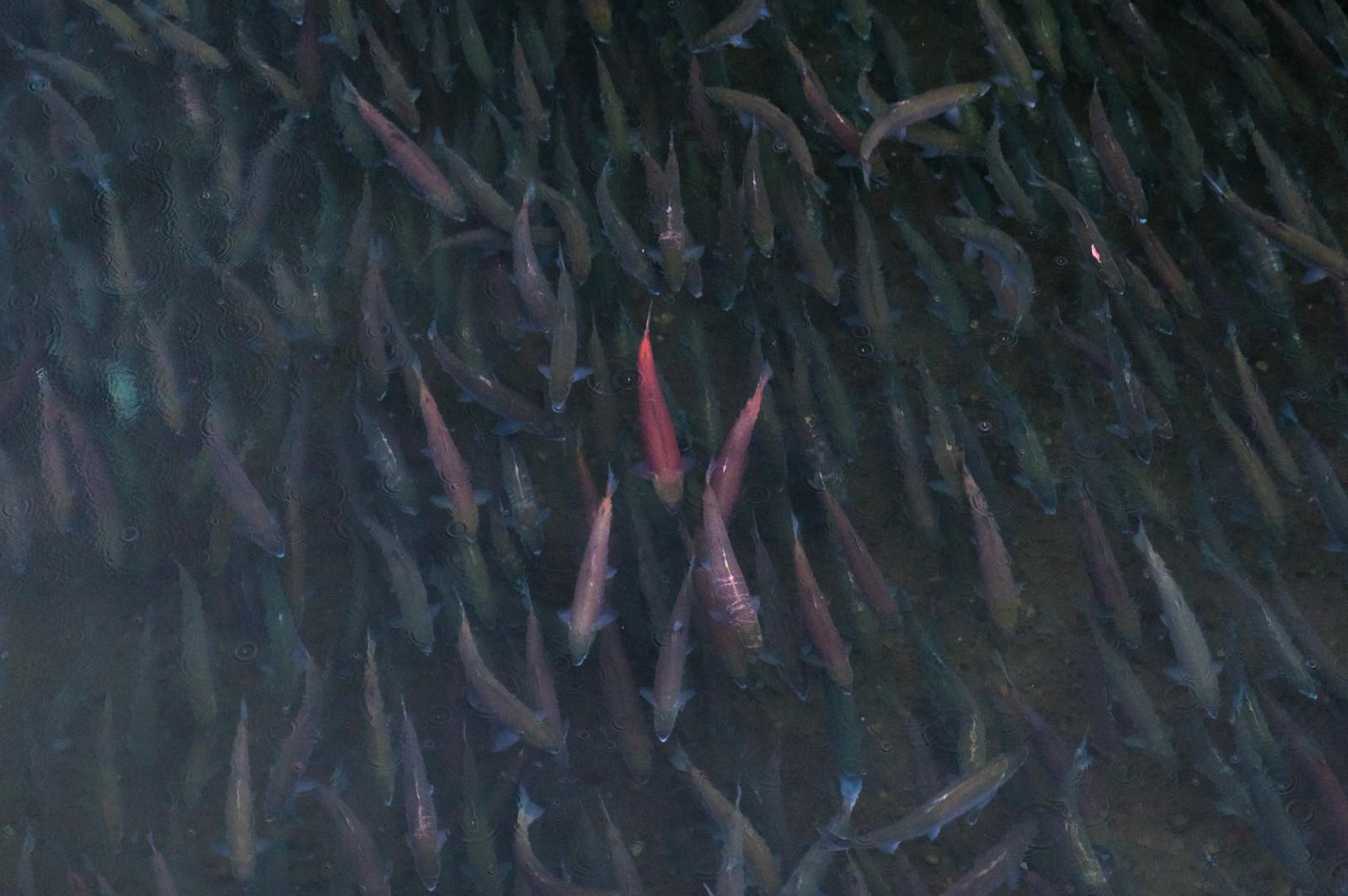 1 of 16 © 2021 Acacia Johnson
Sockeye salmon school near a bridge at Brooks Camp, Alaska. The Bristol Bay watershed is the world's most productive wild salmon habitat. 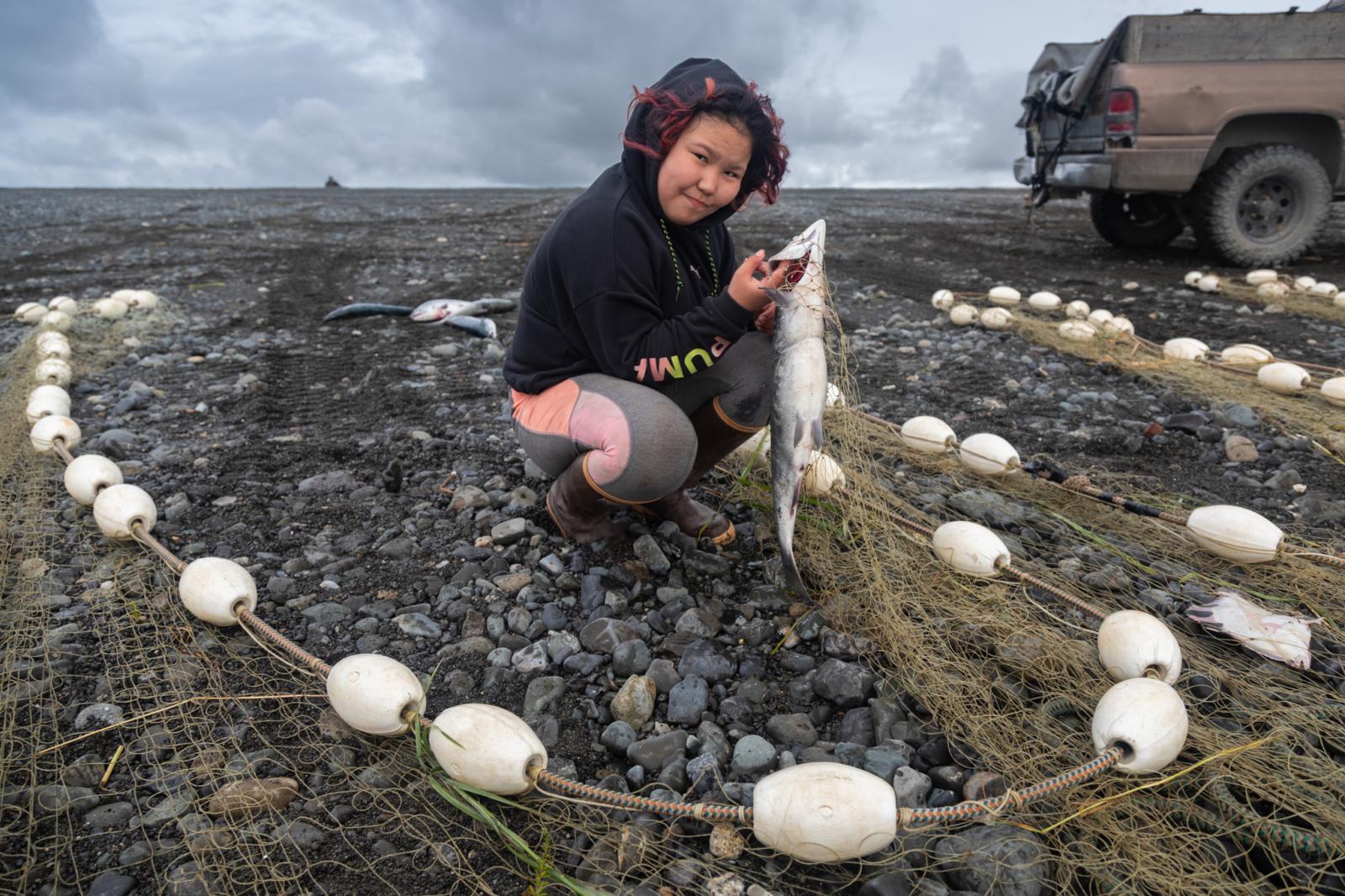 2 of 16 © 2021 Acacia Johnson
Sharlee Sifsof untangles a salmon from her family's set net in Ekuk, a community of seasonal fish camps near Dillingham, Alaska. During the high season in Bristol Bay, subsistence nets such as these can yield thousands of pounds of salmon at a time. 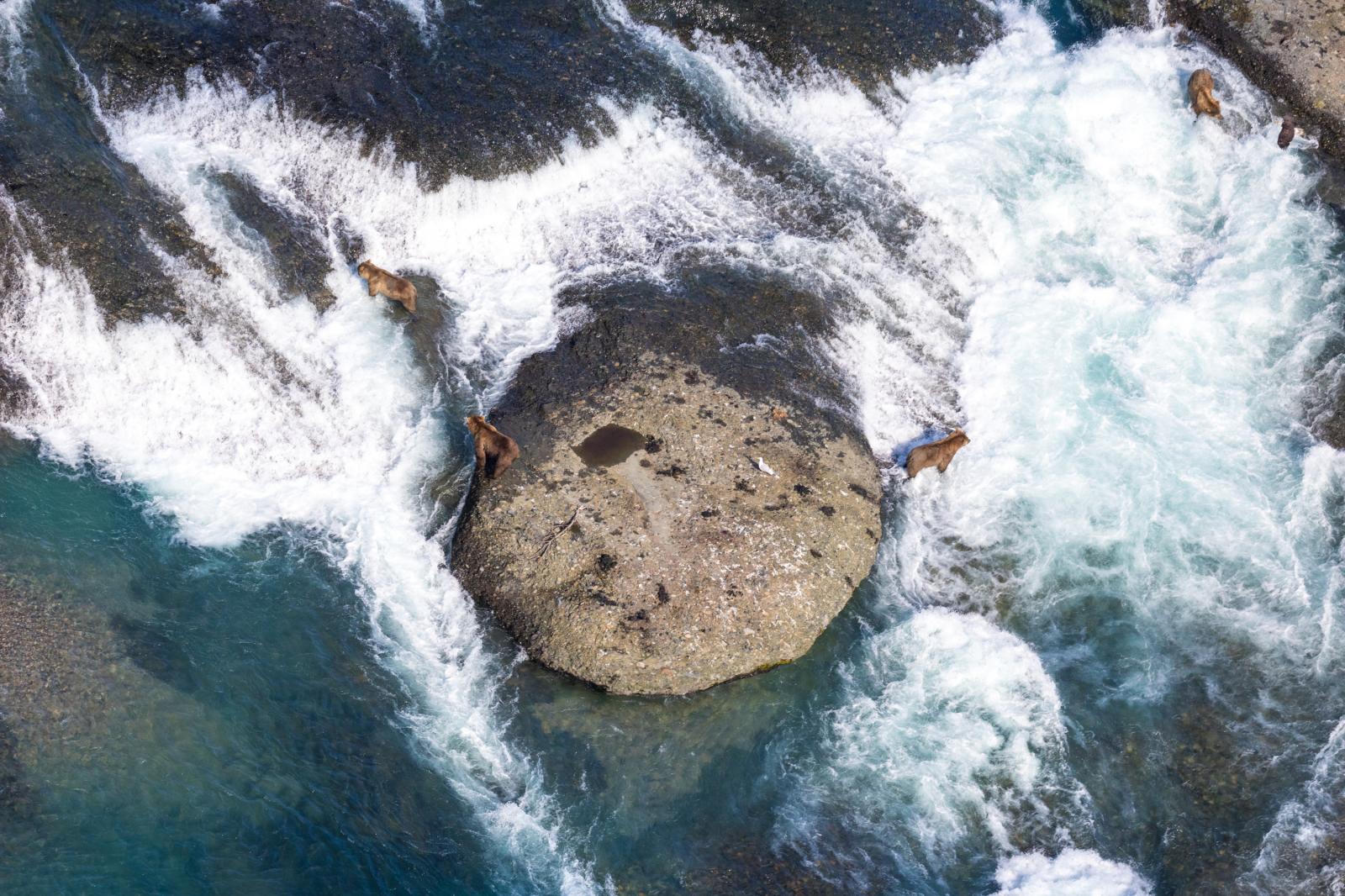 3 of 16 © 2021 Acacia Johnson
Brown bears fish for salmon in McNeil River State Game Sanctuary, where more brown bears gather in one place to fish than anywhere else on earth. One of Pebble Mine's proposed ore transport roads would cut within a mile of their refuge. 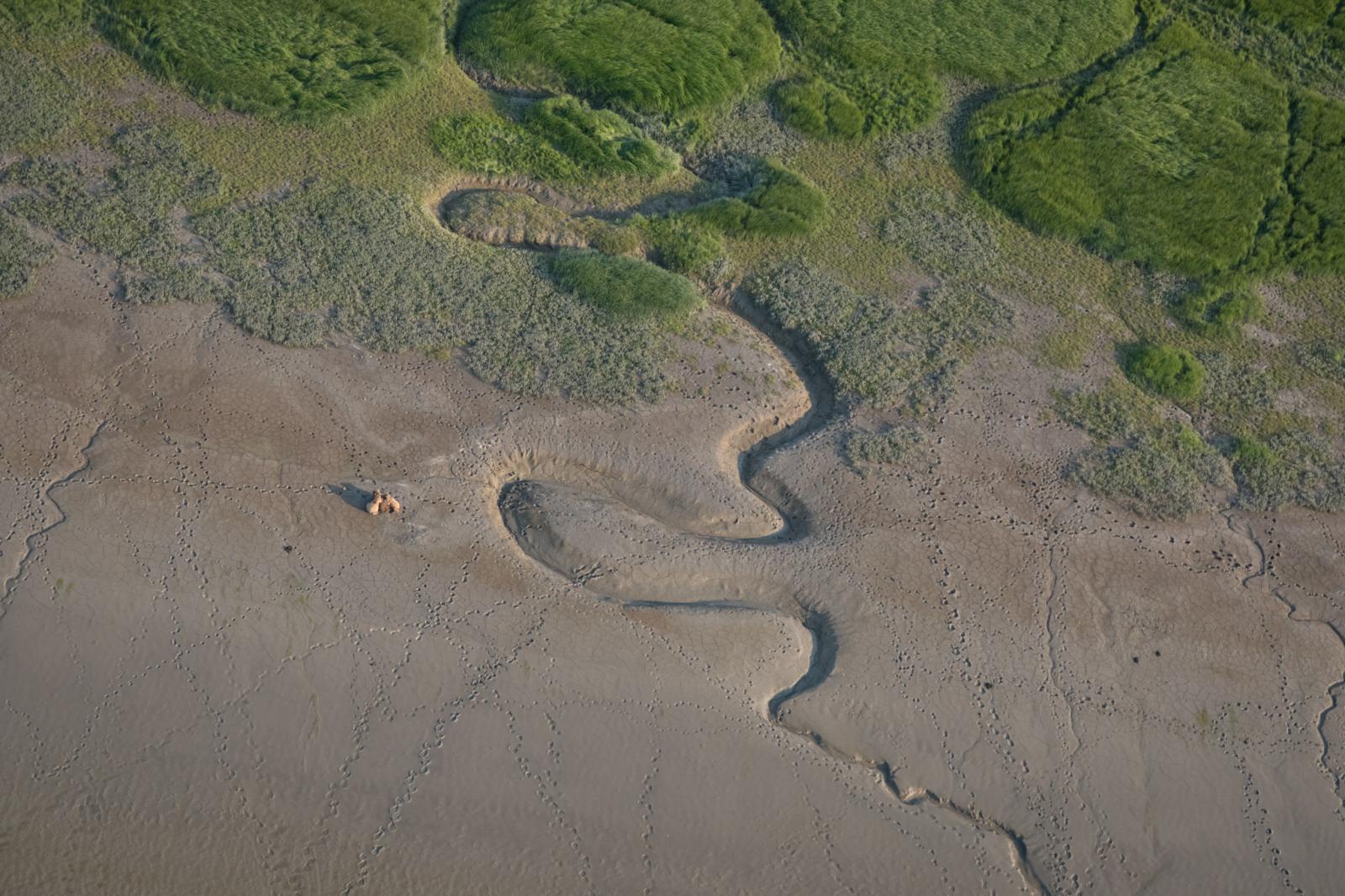 4 of 16 © 2021 Acacia Johnson
Bear tracks pattern the silty shores of Chinitna Bay, a renowned brown bear viewing area in Lake Clark National Park and Preserve. The animals gather here to eat sedge grasses and clams in the mudflats in spring and early summer. One of Pebble Mine's proposed transport corridors would involve a road and industrial port within their wandering range. 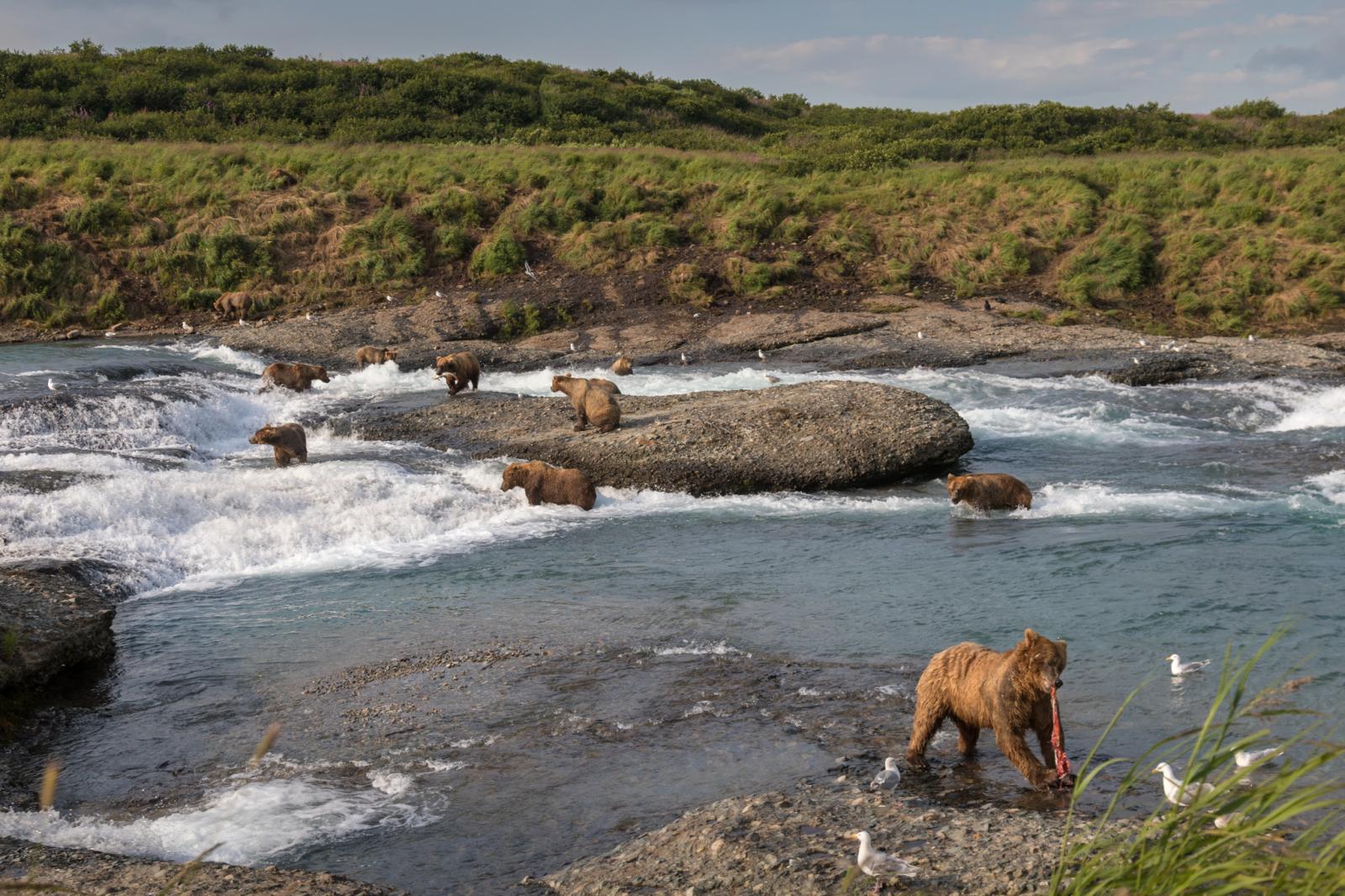 5 of 16 © 2021 Acacia Johnson
The bears at McNeil Falls are uniquely habituated to small groups of bear viewers. Over 80 bears have been viewed at once from this single vantage point, where summer permits are distributed via a lottery system to allow only 10 visitors per day. Bear advocates worry that the proposed mine could negatively affect the animals. 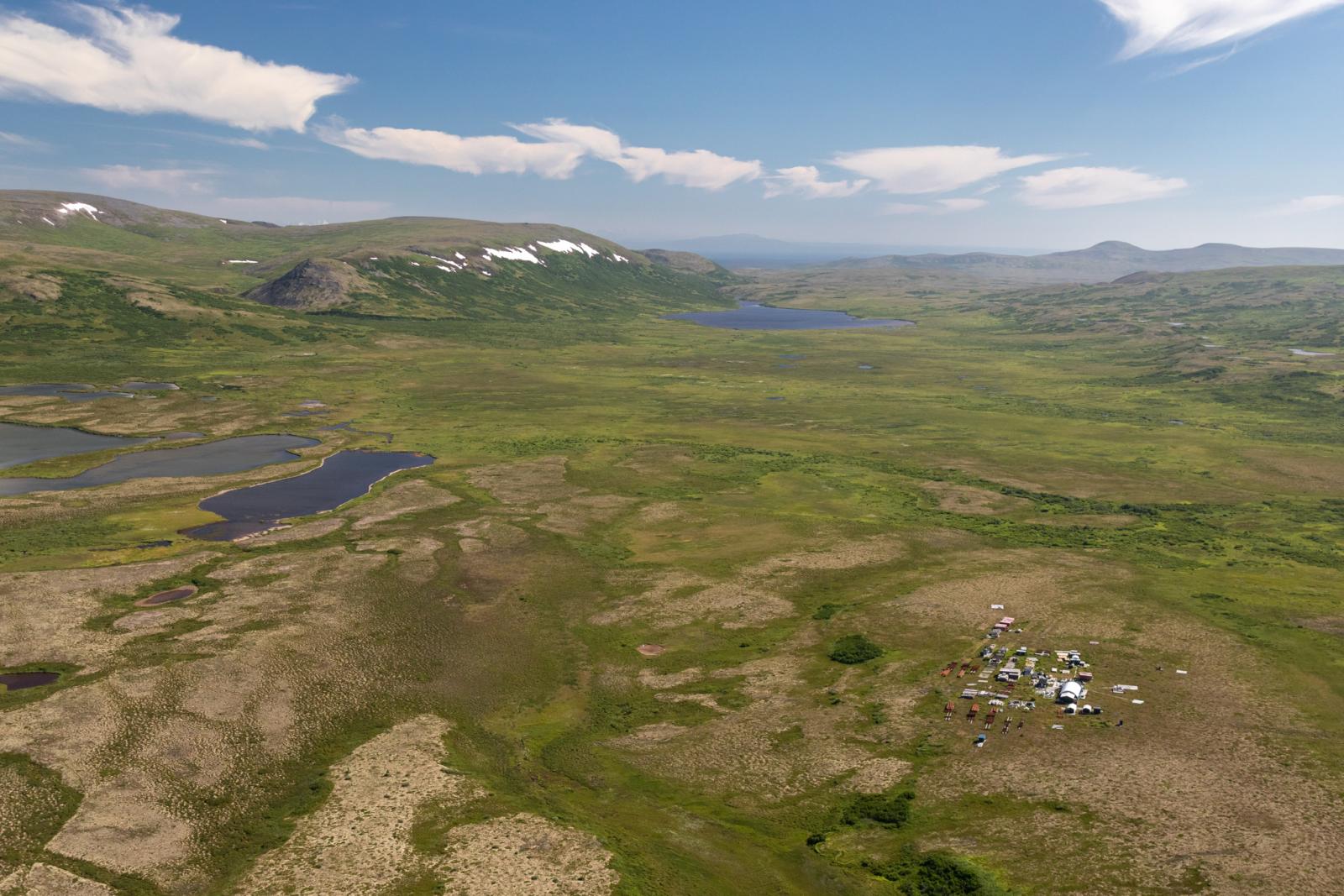 6 of 16 © 2021 Acacia Johnson
A work camp on the tundra at the site of the proposed Pebble Mine, thought to be one of the world's largest deposits of copper and gold.

If built, the mine—an open pit over a mile wide and a third of a mile deep—would employ around 1,000 people and generate an estimated $300 billion. While a few nearby communities, including the village of Iliamna, support the project for the economic boost it could bring to the region, the majority of Bristol Bay residents are opposed to it. 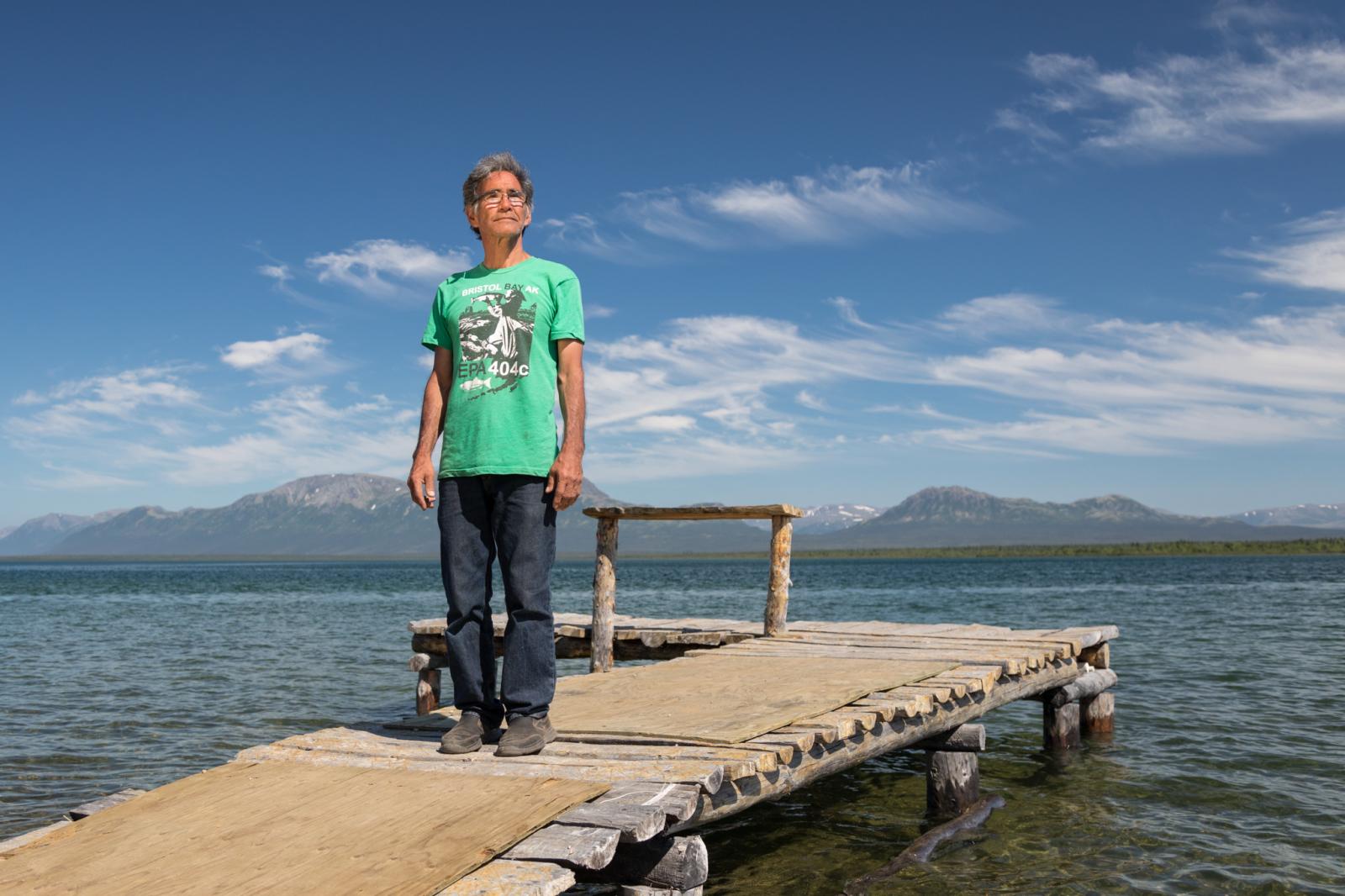 7 of 16 © 2021 Acacia Johnson
Rick Delkittie Sr. at his fish camp near Nondalton, a community of about 110 people that is the closest one to the mine site. Delkittie, a member of the Dena'ina tribe, is a passionate opponent of the mine and has traveled to Washington, DC to lobby on four separate occasions.

He explained that the controversy over the mine has deeply divided the people of the region. "When I was on the tribal council, we invited all the elders to the meeting," he told me. "And they told us, you have to do whatever you can to stop this." 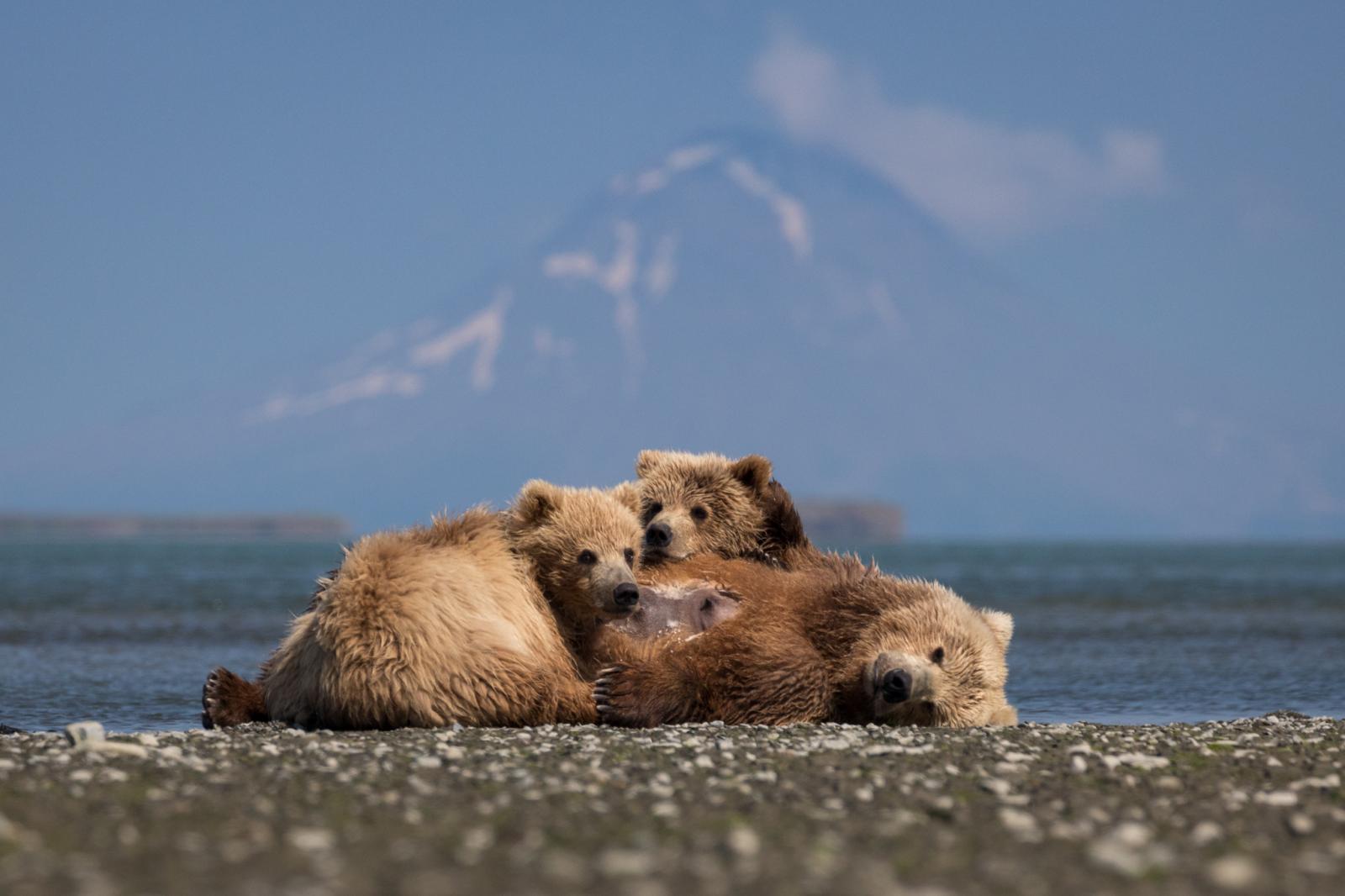 8 of 16 © 2021 Acacia Johnson
A female brown bear known as T Bear nurses her year-old cubs in the tidal flats of McNeil River State Game Sanctuary. In the background is Augustine Volcano, an active stratovolcano that last erupted in 2006. Alaska's frequent seismic activity is one reason why opponents of the proposed Pebble Mine fear that its earthen tailings dams could fail in an earthquake, releasing the waste into the water table and making the rivers toxic to fish. 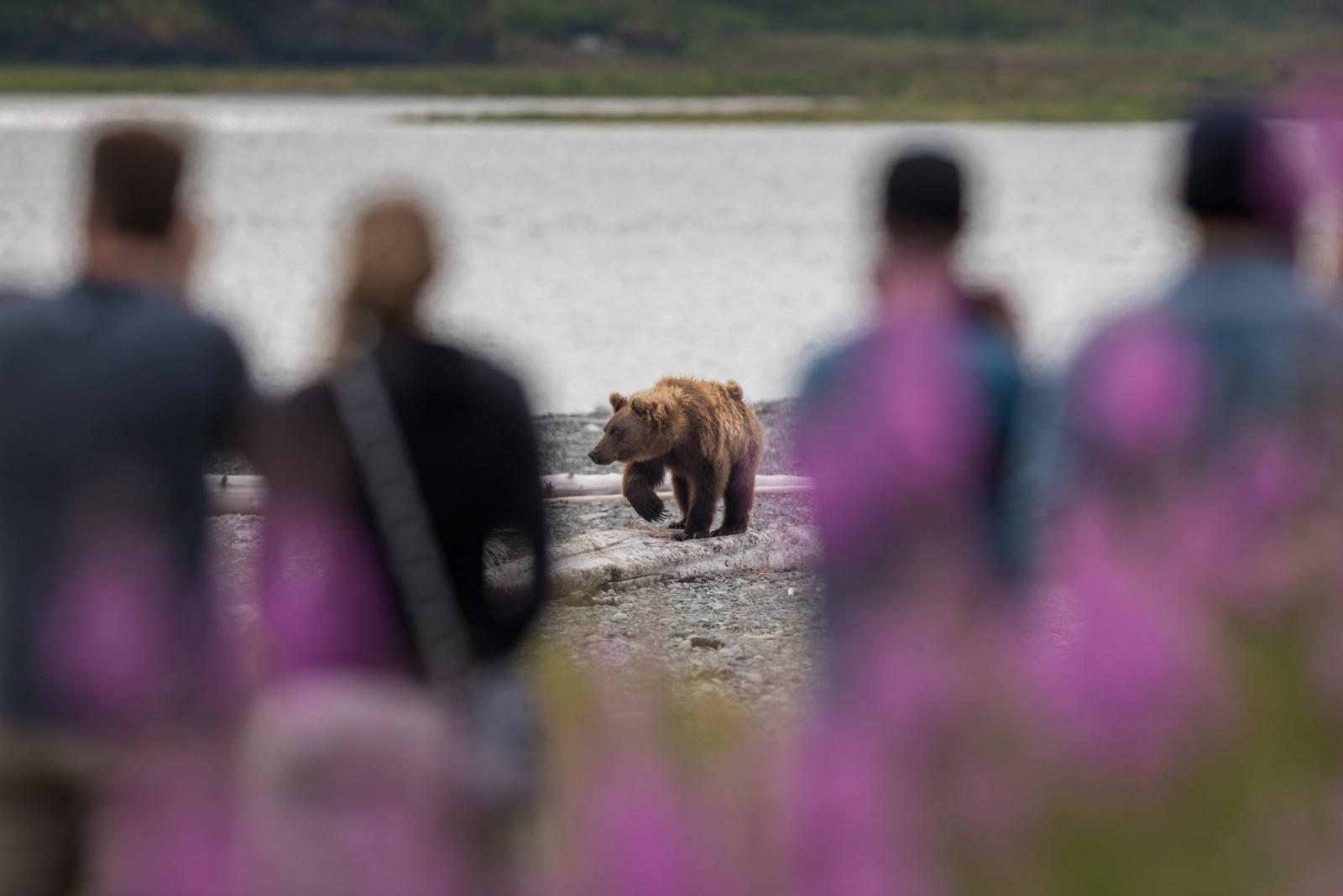 Over the past fifty years, the bear biologists at McNeil have worked to establish relationships of mutual tolerance with the bears, changing widespread beliefs that brown bears are inherently dangerous to humans. If Pebble Mine's proposed ore transportation corridor were built nearby, exposing the bears to mining infrastructure and traffic, these delicate relationships may change. 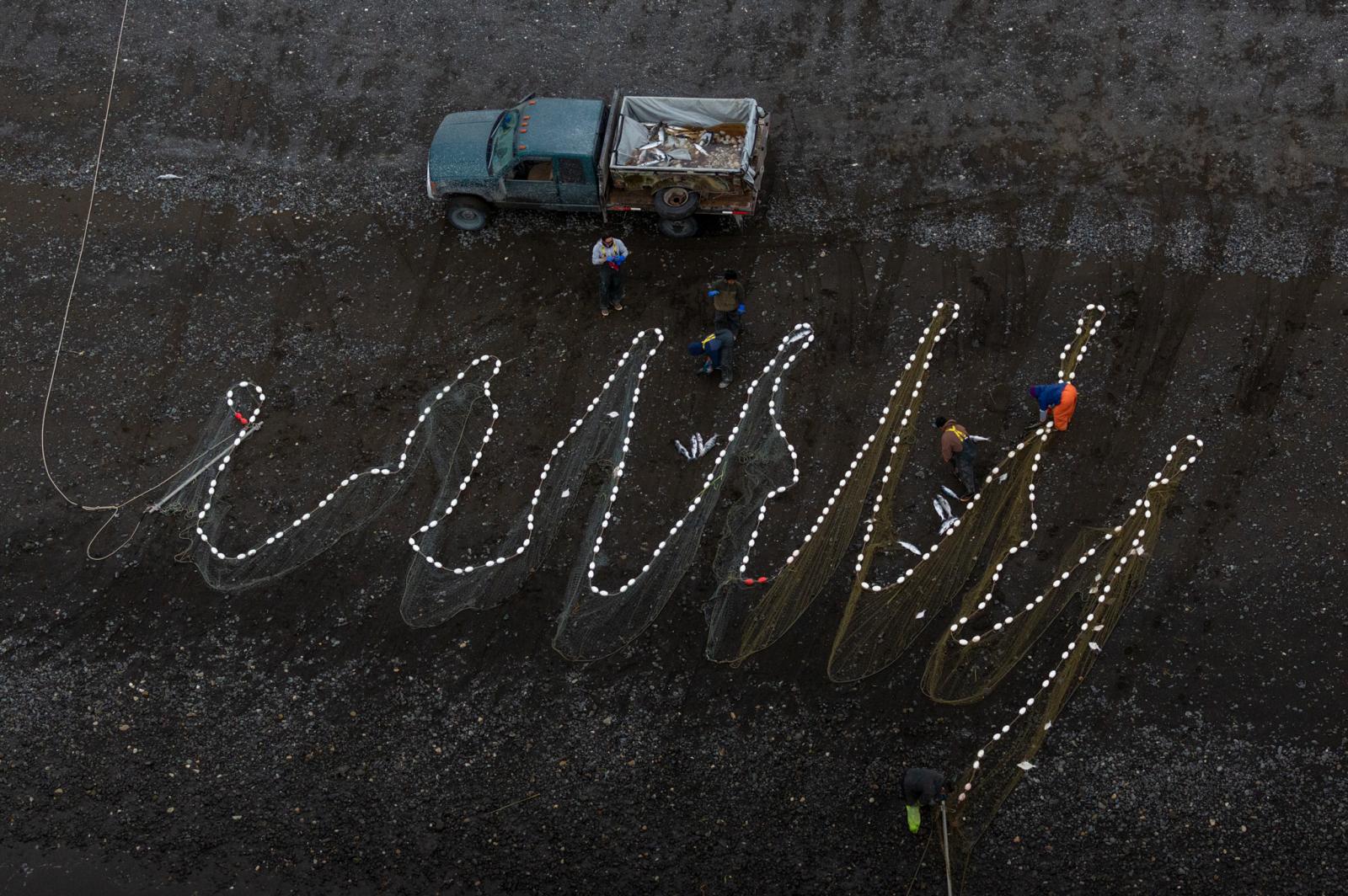 10 of 16 © 2021 Acacia Johnson
Subsistence fishermen pull in sockeye salmon from set nets near Ekuk, a small community near Dillingham, Alaska. Salmon are a critical food source for many Alaskan communities that operate on a subsistence economy. 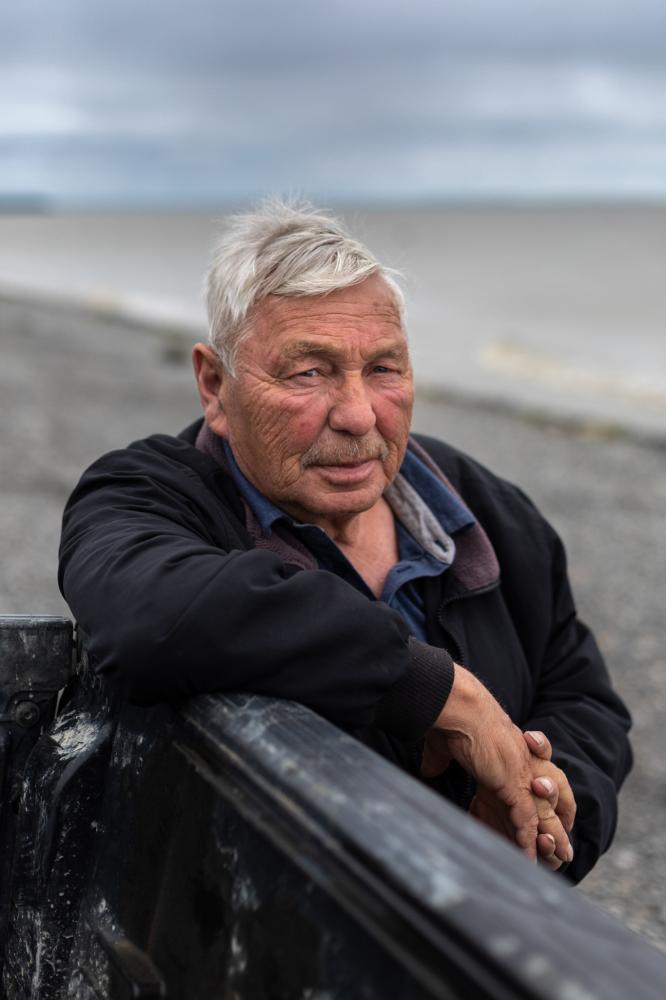 11 of 16 © 2021 Acacia Johnson
Robin Samuelsen, a lifelong fisherman and Curyung tribal chief whose family has commercial fished in Dillingham, Alaska for five generations.

“You can't eat gold," he says. "We have the richest salmon waters in the world here. This commercial fishery is 135 years old, and 50 million sockeye came back this year. The people of Bristol Bay, whether I'm here or not, are going to continue to fight Pebble Mine." 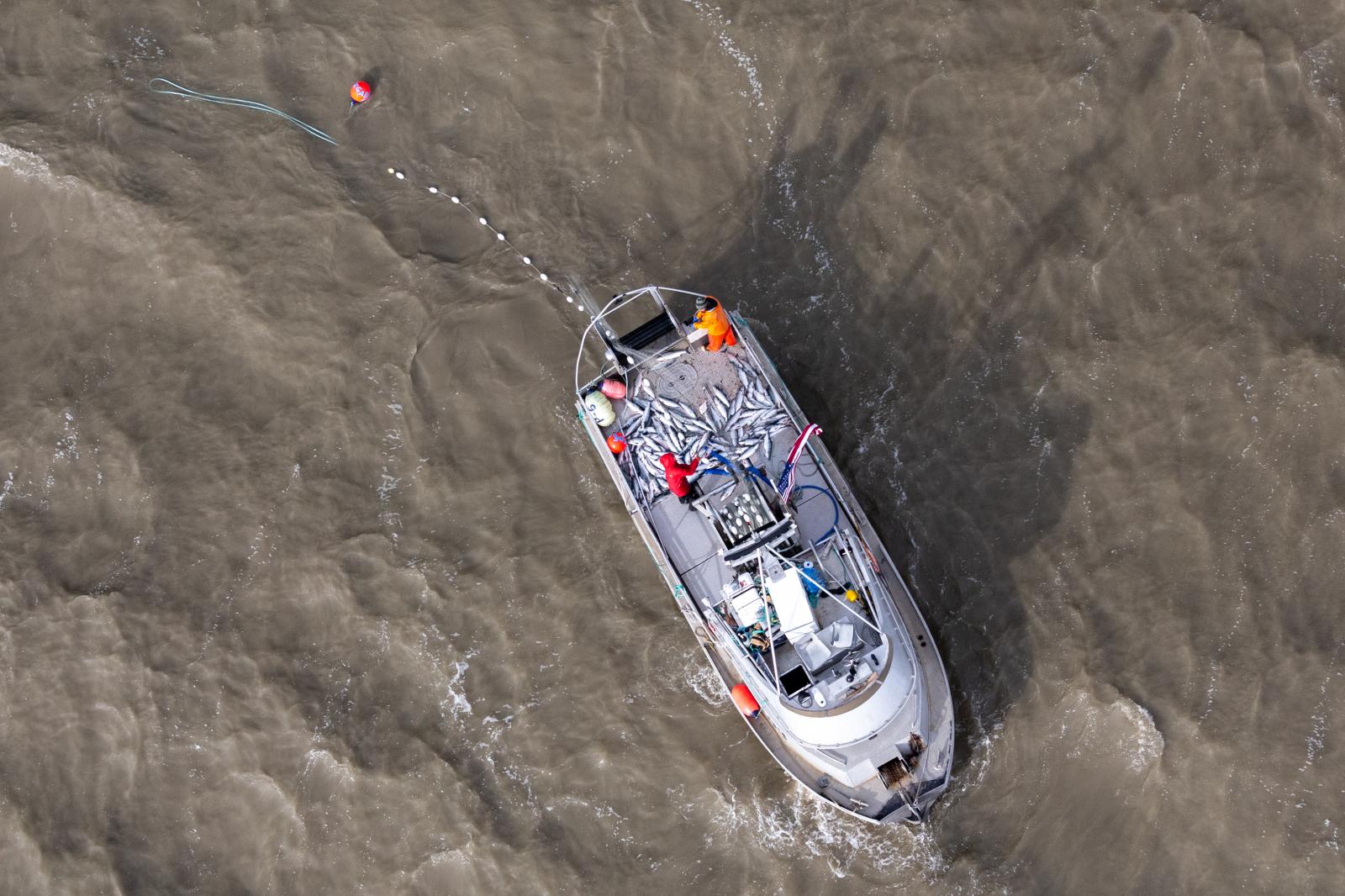 12 of 16 © 2021 Acacia Johnson
Commercial fishermen harvest sockeye salmon near Dillingham, Alaska. This small community forms a major hub for the Bristol Bay commercial salmon fishery, a $1.5 billion industry that supplies more than half the world's wild salmon and supports over 14,000 sustainable jobs. 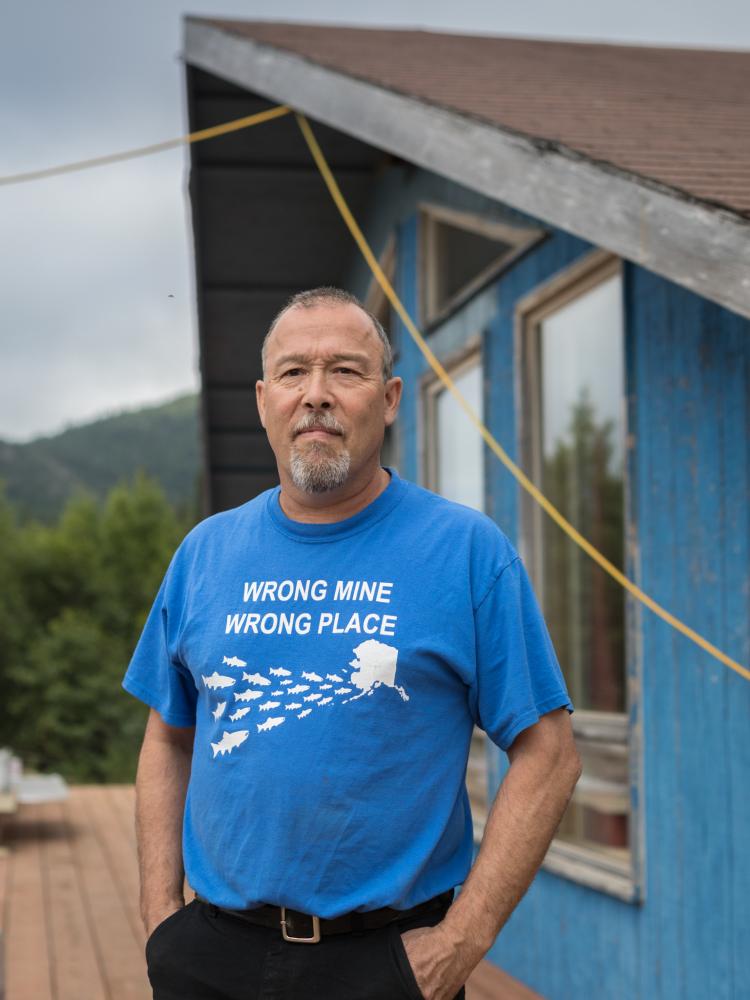 13 of 16 © 2021 Acacia Johnson
Keith Jensen, president of the Village Council of Pedro Bay, Alaska. This small settlement on the coast of Lake Iliamna has stood together against the proposed Pebble Mine, using the Village Council's land holdings to block a northern transportation route the mine had proposed. 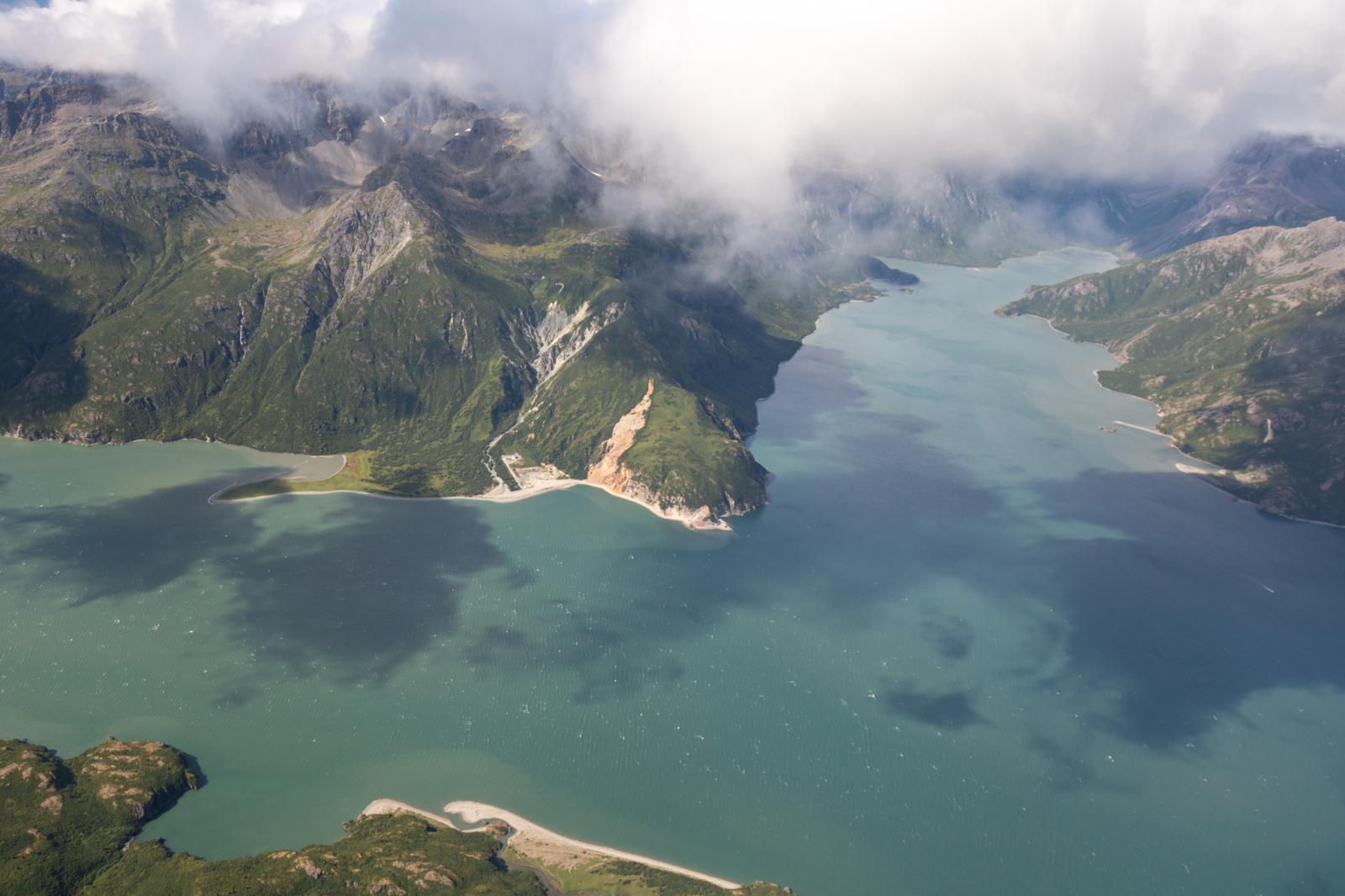 14 of 16 © 2021 Acacia Johnson
Diamond Point, one proposed site of Pebble Mine's industrial port complex. This port would be the end of an 86-mile transport corridor using an existing road over the mountains from Lake Iliamna to Williamsport. Although Native landowners denied the mine access to their lands, it nevertheless included them in its final proposal. 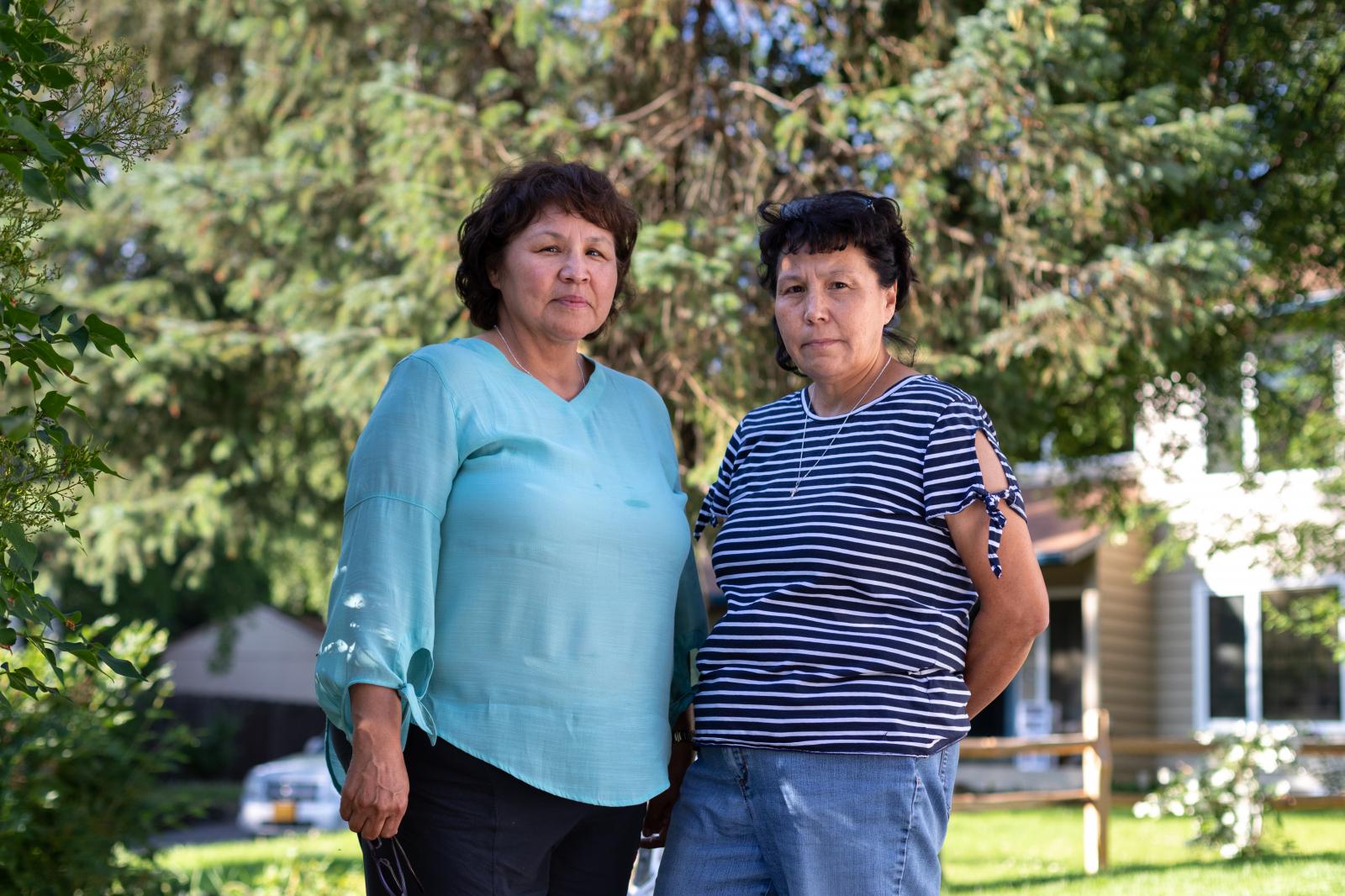 15 of 16 © 2021 Acacia Johnson
Sue Anelon, left, and Lisa Reimers in Anchorage, Alaska. The two sisters are involved with the Native corporation of the village of Iliamna, one of five village corporations that support the Pebble Mine project and that has negotiated to allow the mine access to 68,000 acres of its land. The Canadian mining company, Northern Dynasty Minerals, would pay to improve local infrastructure in several villages and pay out at least $3 million in dividends to locals.

Reimers told the New York Times that her parents "didn't see Iliamna surviving without a project like Pebble." 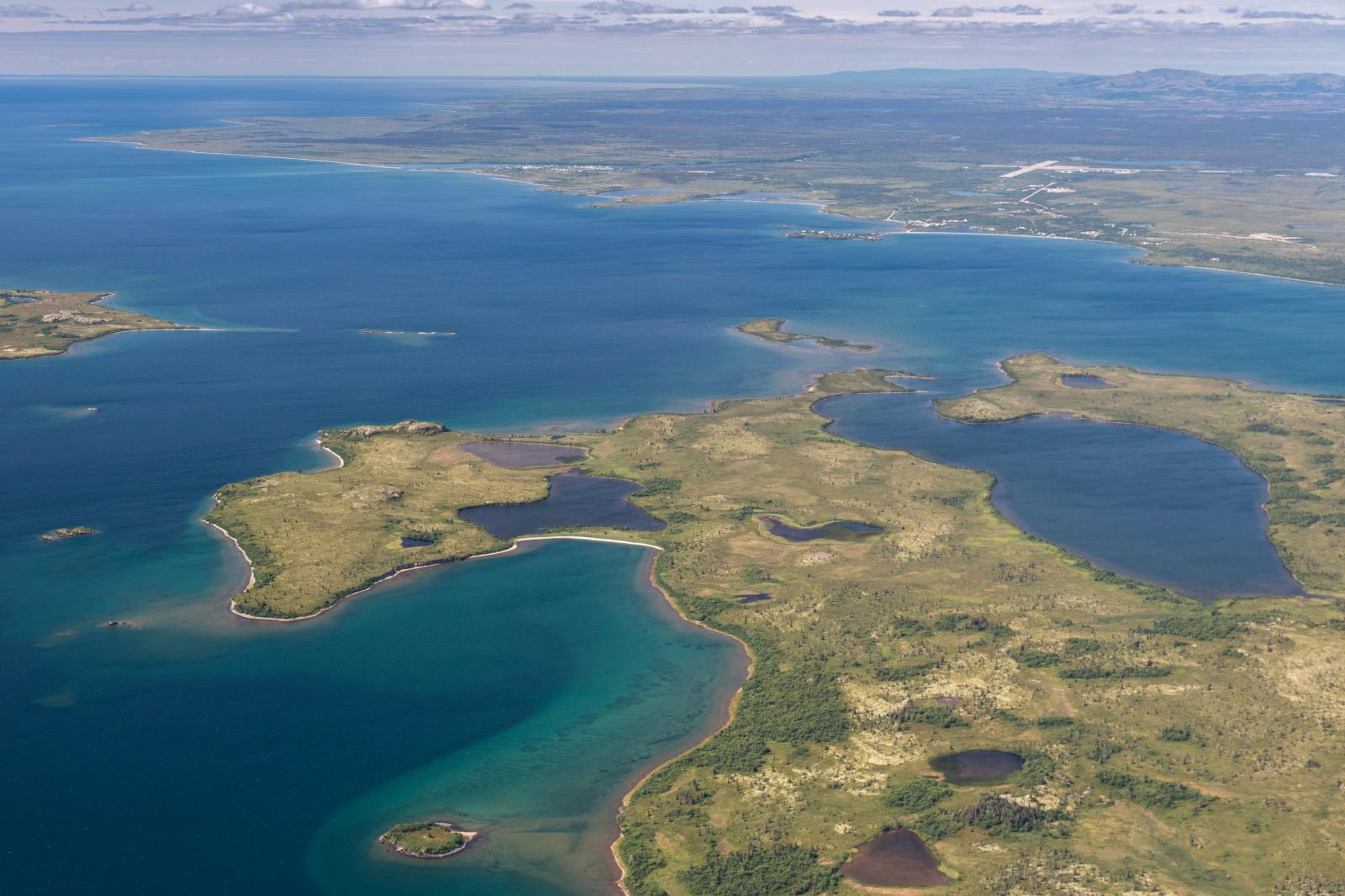 16 of 16 © 2021 Acacia Johnson
The coastline of Lake Iliamna, Alaska, with the town of Iliamna in the background. The community of Iliamna is in favor of the proposed Pebble Mine and the economic opportunities it could bring to the people of the region.
Public Story
Salmon vs. Gold
Credits: acacia johnson
Date of Work: 06/25/19 - 07/24/20
Updated: 01/22/21
Location: Alaska
Archived as:  Alaska, Brown Bears, Controversy, Documentary, Editorial, Environment, Essays, Pebble Mine, Photography, Photojournalism, Spotlight, Wildlife
For the past twenty years, the wilderness of Southwest Alaska has been the subject of a heated controversy over a proposed copper and gold mine headed by a Canadian company. The project, known as Pebble Mine, would be the largest open-pit mine in North America, generating an estimated $300 billion over a 20-year lifespan. But the project has long been met with fierce opposition for the irreversible harm it could pose to the pristine natural environment, and in particular, Alaska's lucrative salmon fishing industry.

If built, Pebble Mine would use earthen dams to store hundreds of millions of tons of toxic mine tailings—including selenium, mercury, arsenic, and sulfuric acid—in the headwaters of the Bristol Bay watershed, the world's most productive wild salmon habitat. If the mine tailings were to leach into the water table, the rivers could be poisoned, destroying the homelands of over 25 Alaskan Native tribes and the jobs of 14,000 people who make a living from Bristol Bay's $1.5 billion salmon fishery. The construction of mining infrastructure would also result in permanent habitat loss for the world's most celebrated populations of wild brown bears, which depend upon the region’s salmon-bearing rivers and draw tens of thousands of visitors to Alaska every year.

Although the Pebble project was blocked in 2014 under the Clean Water Act, its permitting process has been fast-tracked under the Trump Administration. For now, the fate of the region remains uncertain: while supporters of Pebble Mine wish to bolster the local economy, opponents of the mine feel that the consequences of an environmental disaster—to the salmon, the people of the region, and the bears—are simply too great to risk.


These images are a selection from assignments from National Geographic and the New York Times.

Under The Same Stars

By Acacia Johnson / Anchorage, Alaska — These images are a meditation on the boreal landscape of Alaska, my childhood home. In the Far North, a..
Jun 21, 2016

By Acacia Johnson / Iceland —   Polaris  is an exploration of otherworldly occurrences in the wilderness of Alaska and Iceland...
Jun 21, 2016