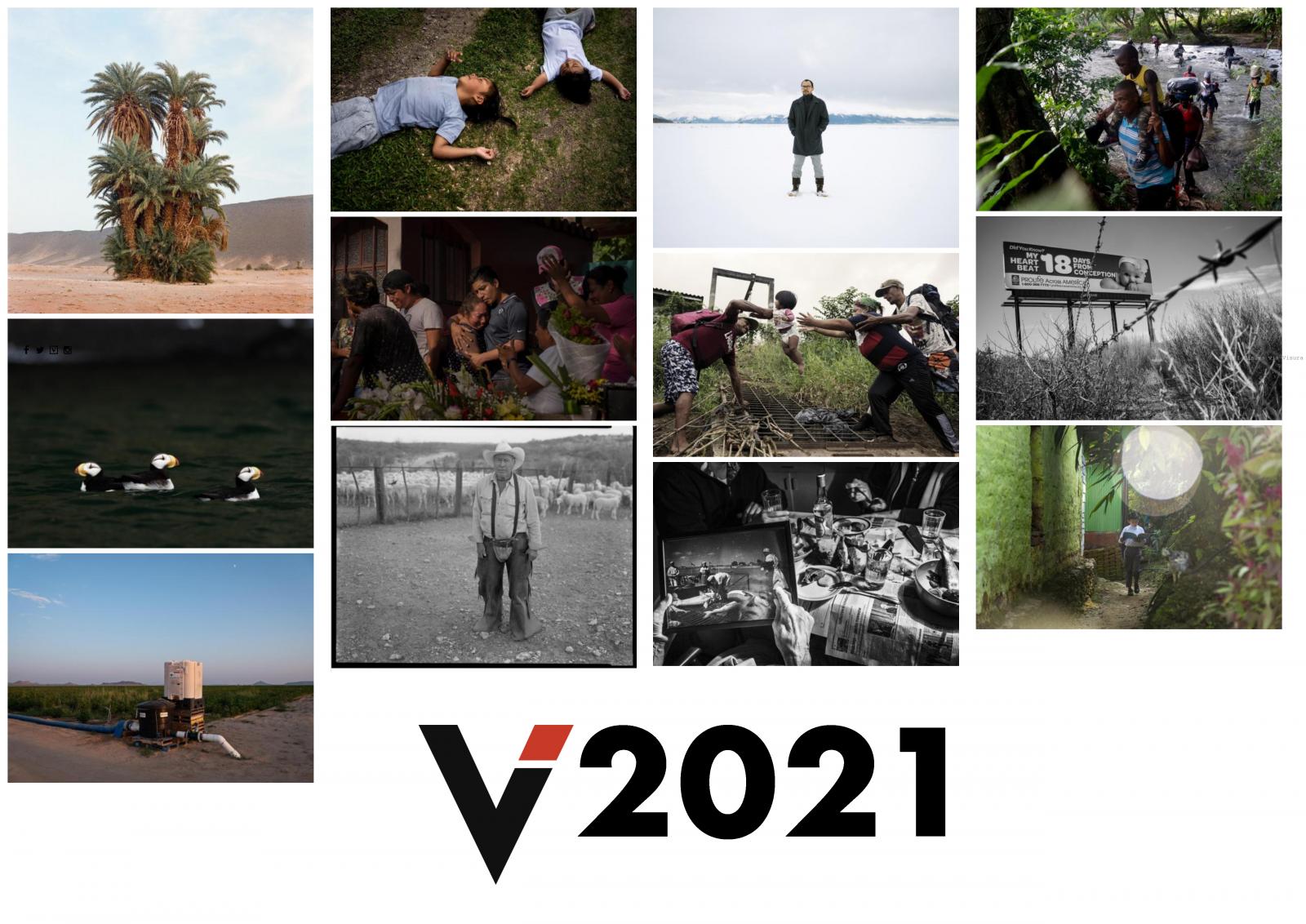 Visura is delighted to present this year's Editors' Picks, a multi-part series curated by leading photo editors in the industry highlighting powerful visual images by Visura members. Each image is accompanied by a short reflection from the guest editor.

A special thanks to the Visura community, its participants and contributors. No one person acts alone!

"When I look at this photograph, I can feel the tenacity of the Haitian refugees as they seek to cross the Darién Gap.  Spanning the border of Colombia and Panama, this roadless jungle is one of the most dangerous crossings in the world.

The photograph illustrates their sheer grit, determination, and hope to get to the United States, even if it means taking the hardest route to get there. Here, you can see they are traveling with the little belongings they have and carrying their children while they cross the river." 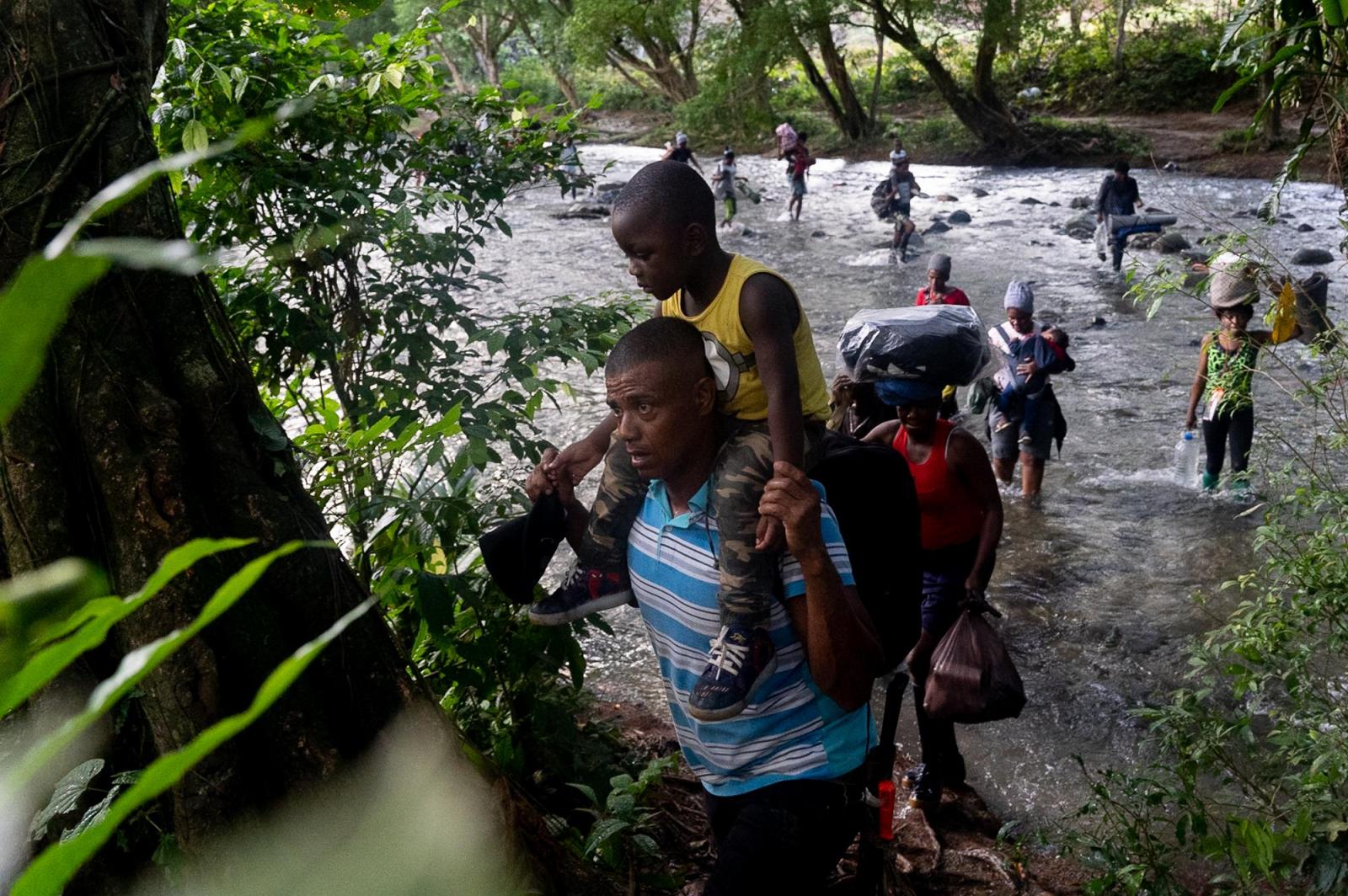 A migrant carries a child over a river where a previous traveller has left the sole of a shoe behind. (Photo by Yader Guzman for The Globe and Mail / 2021)

Photographer
Based in Bogota Colombia
www.yaderguzman.com
Follow Yader on Visura

Yader is an award-winning photojournalist and documentary photographer based between Toronto, Canada and Bogotá, Colombia. His personal work focuses on issues of human rights, migration, displacement, and culture in Latin America and Canada. His has worked for publications such as The Globe and Mail, Macleans, The Local, The San Francisco Chronicle, Global Citizen, and True North Photo Journal.

"For the last five years, I have worked with Nicolo Filippo Rosso across Latin America on migration issues for Bloomberg. Rosso's compassionate and immersive style of photography has produced numerous memorable photographs both while on assignment and through his own personal work, making it hard to choose just one of his images from this year.

I choose this photograph of migrants arriving in Puerto Limon, Panama, after crossing the treacherous Darien Gap in November, because for me it represents the true story of the migrants  -- the strength, struggle and determination of migrants risking their lives to find a better and safer life for their children." 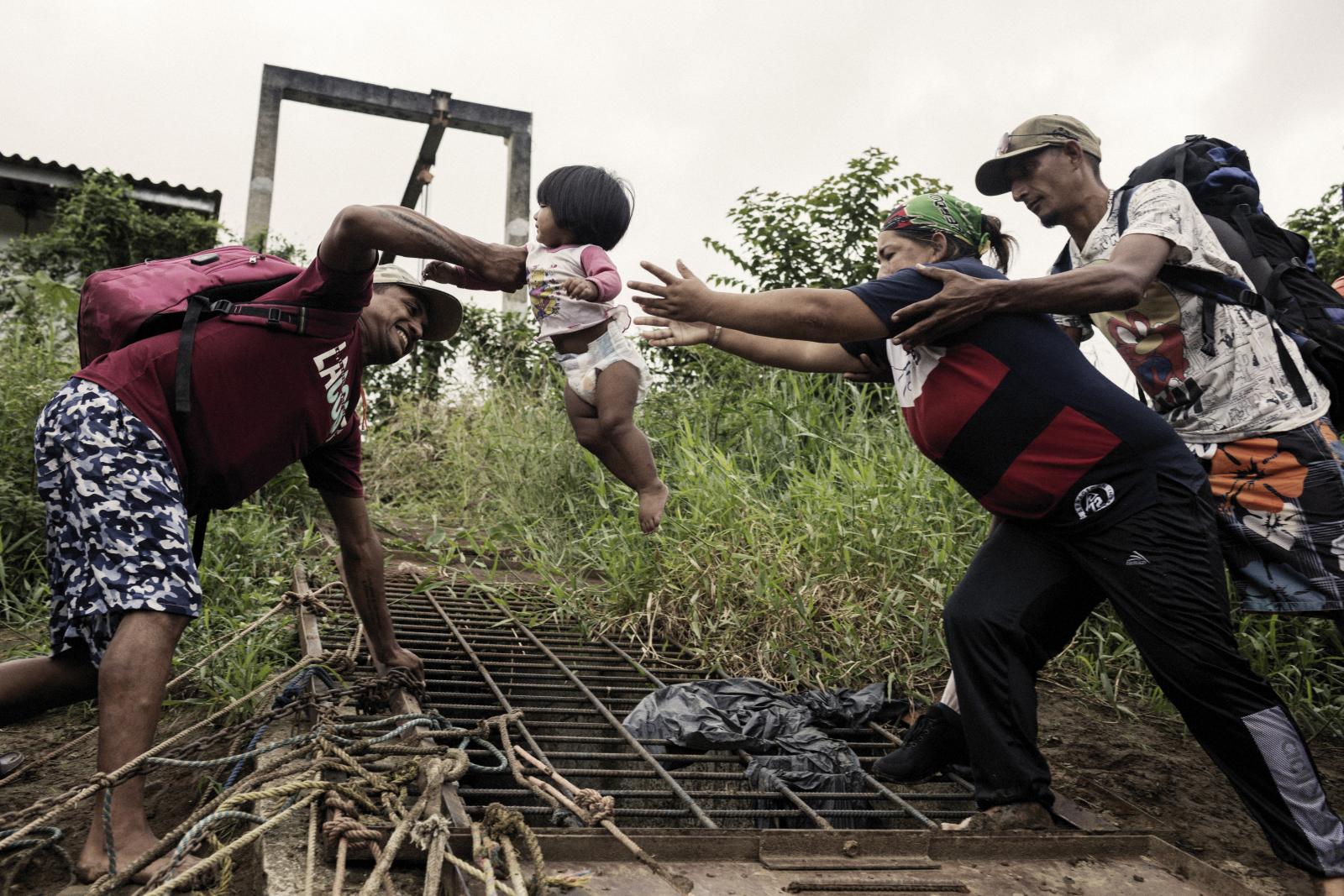 A Haitian migrant carries his son through the Darian Gap in Colombia towards the border with Panama. Colombia, October 2021. (Photo by Nicolo Filippo Rosso/Bloomberg via Getty Images)

Nicolo Filippo Rosso is an independent documentary photographer living in Bogotá, Colombia. After graduating with a degree in literature at the University of Turin, in Italy, he immersed himself in the study of photography, subsequently working as a teacher of documentary photography, and putting together reports and documentaries from South America, the Middle East, and the United States. His photographic background includes seminaries, workshop and masterclass with some great photographer such as Moises Saman, Stanley Greene, Franco Pagetti and Pep Bonet, among others.

In 2012 he began a project to document the medicinal practices of indigenous villagers in the Colombian Amazon, with the objective of recording how these people have been adapting to the demands of a new globalized world. Medicine of the Spirit forms part of a long-term project to document the ancient healing practices in those countries where the shamanism forms an integral part of the spiritual road to healing. His hope is that by recording these ancient practices and traditions of indigenous people he will contribute to preserving what is sacred and help to give voice to the communities most affected by the economic and cultural transformations of our age.

From 2014, he has collaborated with NGOs, including Colombia Diversa and ONIC, both based in Colombia. His work has been published in Bloomberg News, National Geographic, Witness Journal,Cañamo Magazine, and El Tiempo.

Robert Miller, Deputy Director of Photography at The Washington Post

"Ranita Roy has a gifted eye. She transports the viewer to the essence of a scene in ways that allow us to hover in that space and feel the humanity of her visual storytelling." 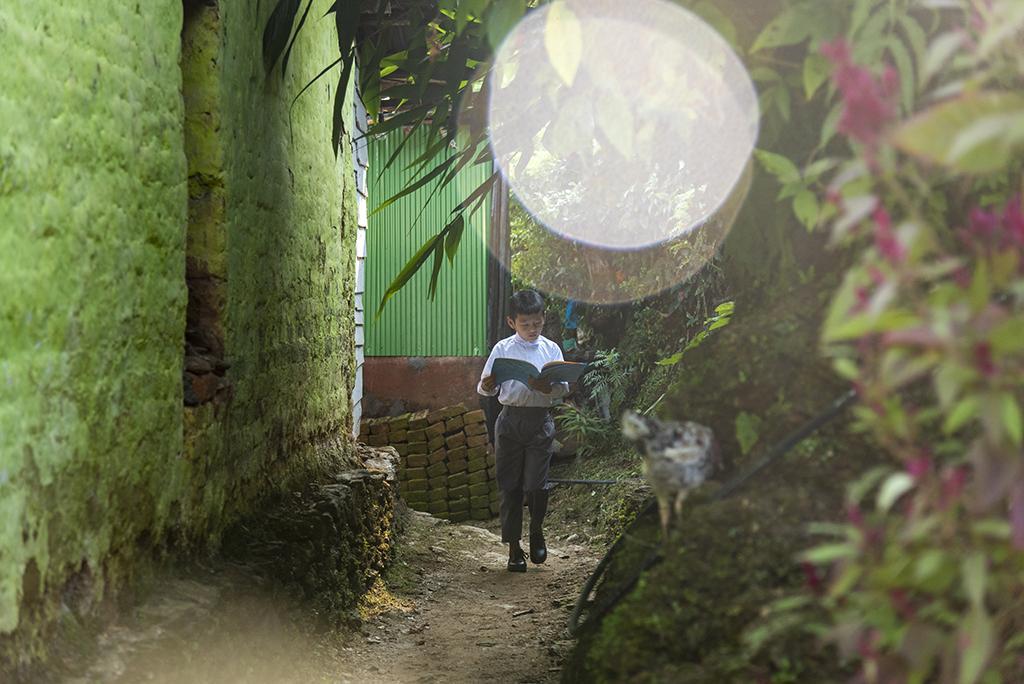 Ranita Roy is a freelance Visual Storyteller currently based in Kolkata, India. Her work combines personal narrative with themes related to environment, social justice, and mental health with a personal narrative.

Ranita completed a Master’s degree in Environmental Science, also having knowledge in Anthropology, Zoology, Botany, all of which helped her to understand the land and its people, in a very intimate way. She attended the 7th annual  New York Portfolio Review organized by The New York Times in New York. In 2020, after being nominated by Reuters, she also completed the Hostile Environment Awareness Training (HEAT) at Jakarta. In 2021, she became a  Magnum Foundation Photography and Social Justice Fellow and She has been shortlisted for Leica Oskar Barnack Award (Newcomer) 2021.

"While the significance of the historical references in Elmaleh’s work are undeniable, I am most drawn to the humanity in her images. The direct eye contact and determination of this lone subject are particularly powerful. He has an earnestness that is accessible to any viewer, with or without a sense of larger body of work or its context in the canon at large. " 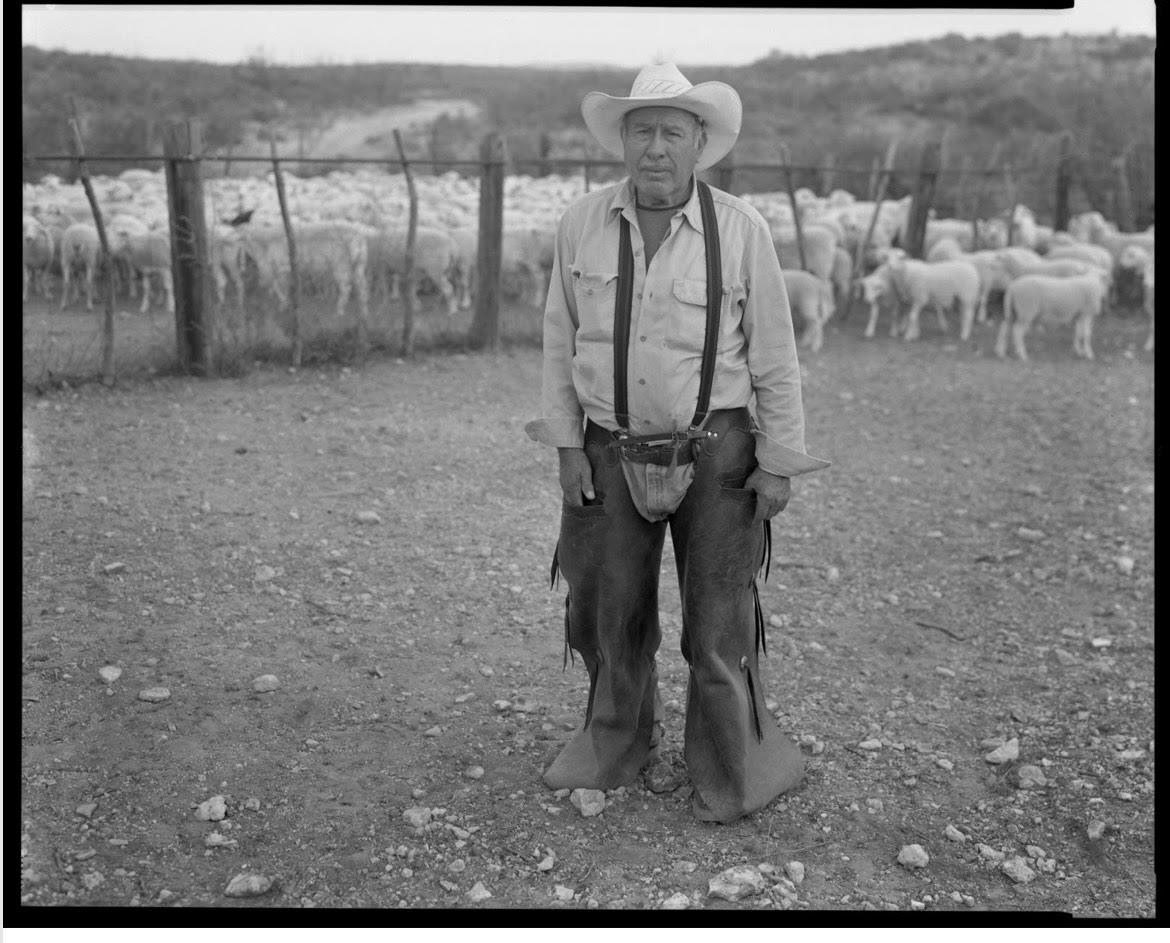 Vaquero, 2017.  Comstock, Texas. From the series 'Between the Divides', a body of work documenting middle America during the years of the Trump presidency. (Photo by Lisa Elmaleh)

Lisa Elmaleh is an American visual artist, educator, and documentarian based in Hampshire County, West Virginia. She specializes in large-format work in tintype, glass negative, and celluloid film. Since 2007, she has been traveling across the US documenting American landscapes, life, and culture.

Born in Miami, Florida (1984), Lisa completed a BFA at the School of Visual Arts in New York in 2007, during which time she was awarded the Silas Rhodes Scholarship. Upon graduating, she received the prestigious Tierney Fellowship to work on a project that evolved into an in-depth visual documentation of the impact of climate change on the Everglades. The culmination of this project resulted in a book titled Everglades published in 2016 by Zatara Press.

"This image is why I do what I do. It reveals the power of visual storytelling, and how one image can inform while fostering empathy, perspective and respect. Victoria's eye and sensitivity elevate the depth of her visual narrative, and I cannot wait to see more of her work throughout the years." 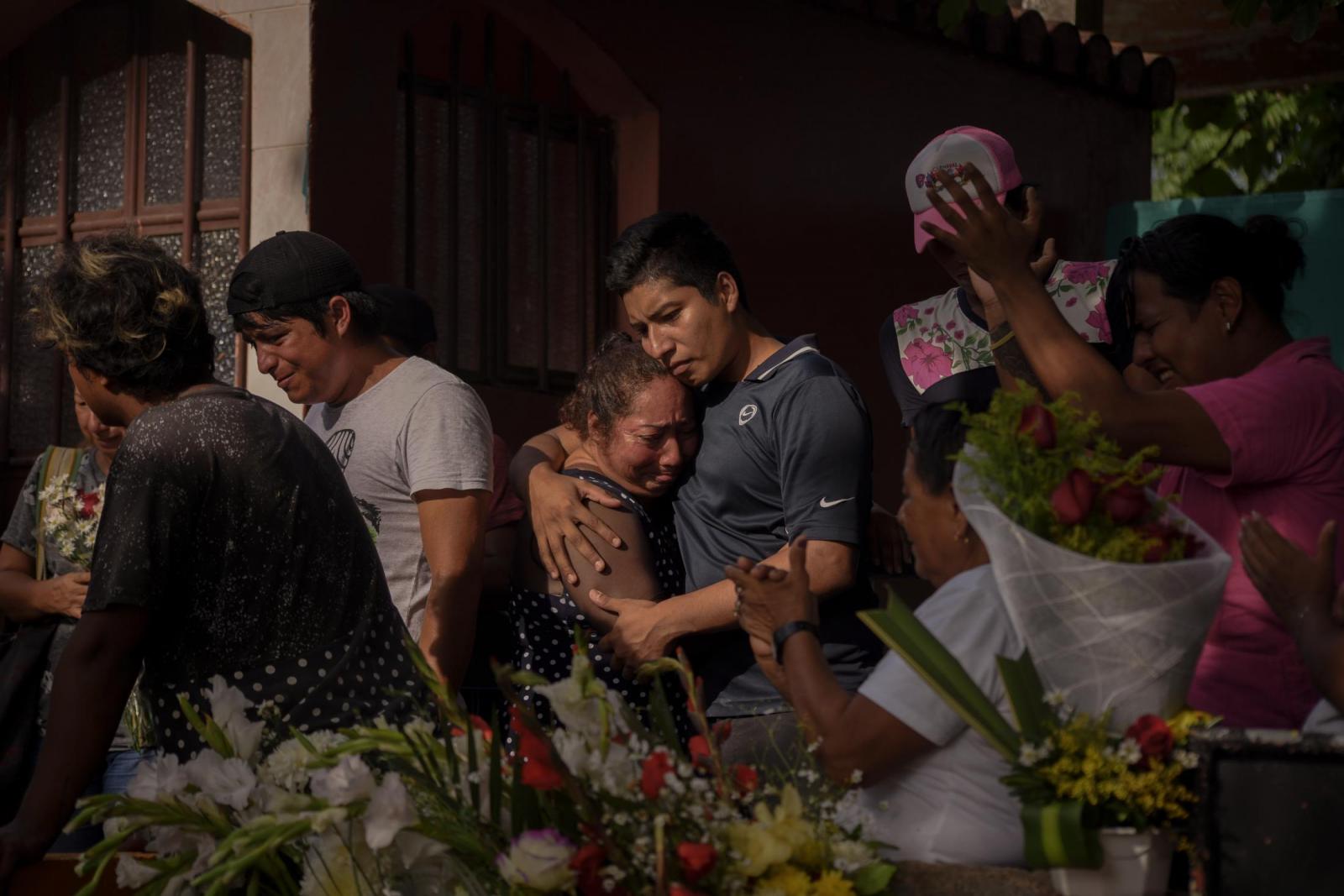 From the ongoing personal project titled 'Resilience', a series portraying episodes from my personal life and documenting stories of women who have crossed my path.  (Photo by Victoria Razo)

Victoria Razo is a freelance photographer based in the city of Veracruz, Mexico. Her work and vision focuses on issues of Human Rights, gender, migration, and environmental crises. Currently, she works as a photojournalist collaborating with Agence France-Presse and Cuartoscuro Agency.
Her photographs have been published in international media such as The Washington Post, NPR, TIME, The Guardian, The New York Times, El Pais, Vice News and others.