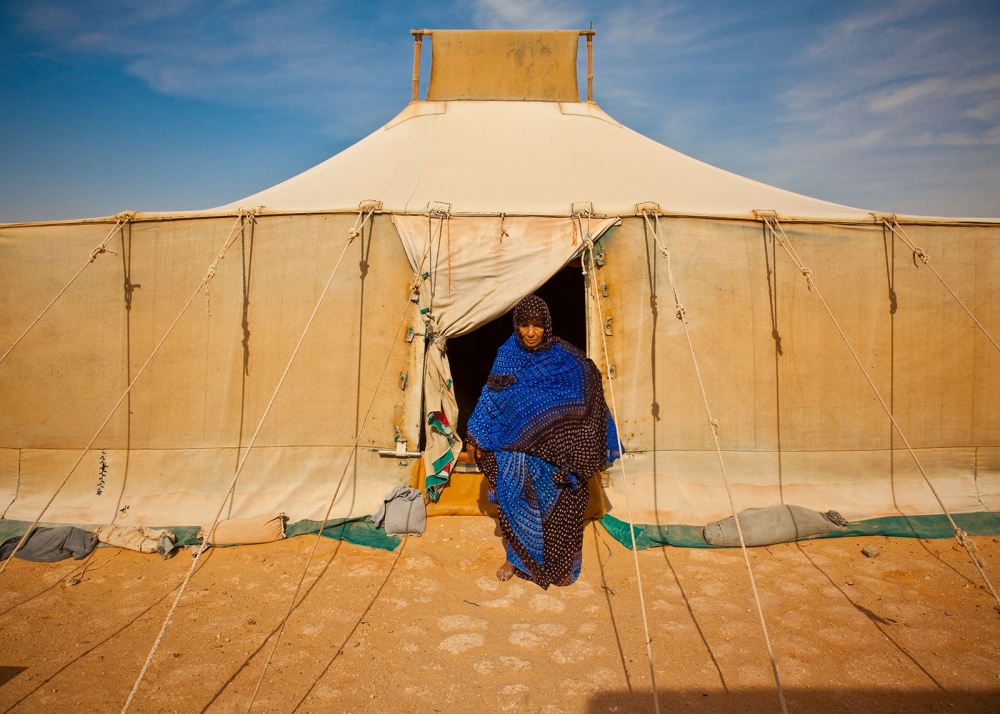 A woman who fled during the Moroccan occupation and crossed into Algeria after the morrocan napalm bombings of Saharawi refugee camps in Western Sahara. She has now lived in the Tindouf Refugee camp for 35 years. The fact that she is living in a tent is a symbolic act. The tent symbolizes that the settlement is not permanent, and that they will one day pack it down and return home. 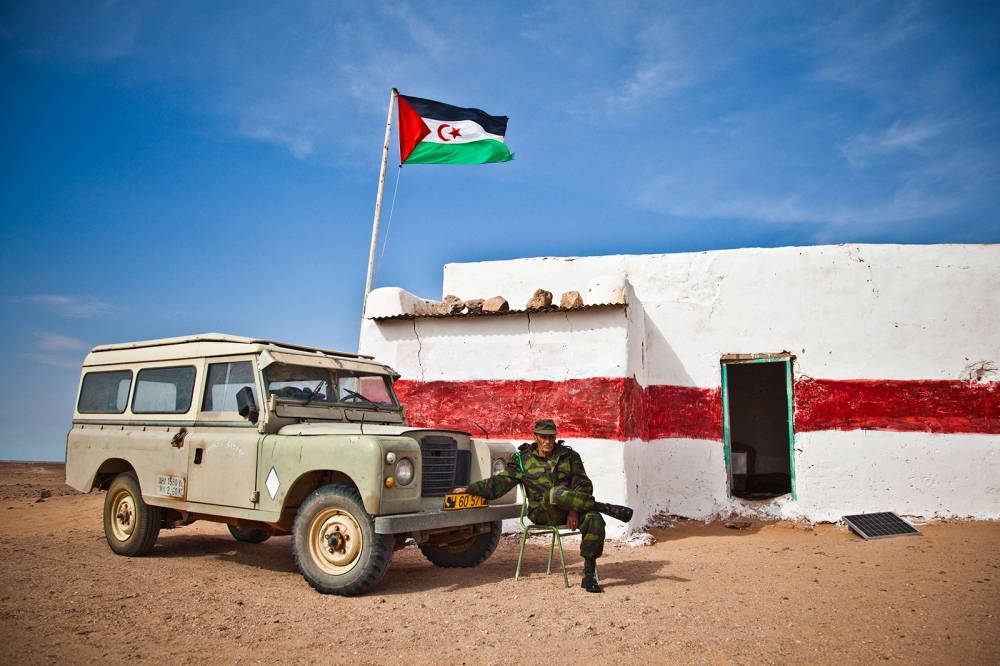 A Polisario officer is seen at a military outpost in the desert.

The Polisario Front serves as the liberation movement, the army and the only political party of The Western Sahara Arab Republic (SADR). 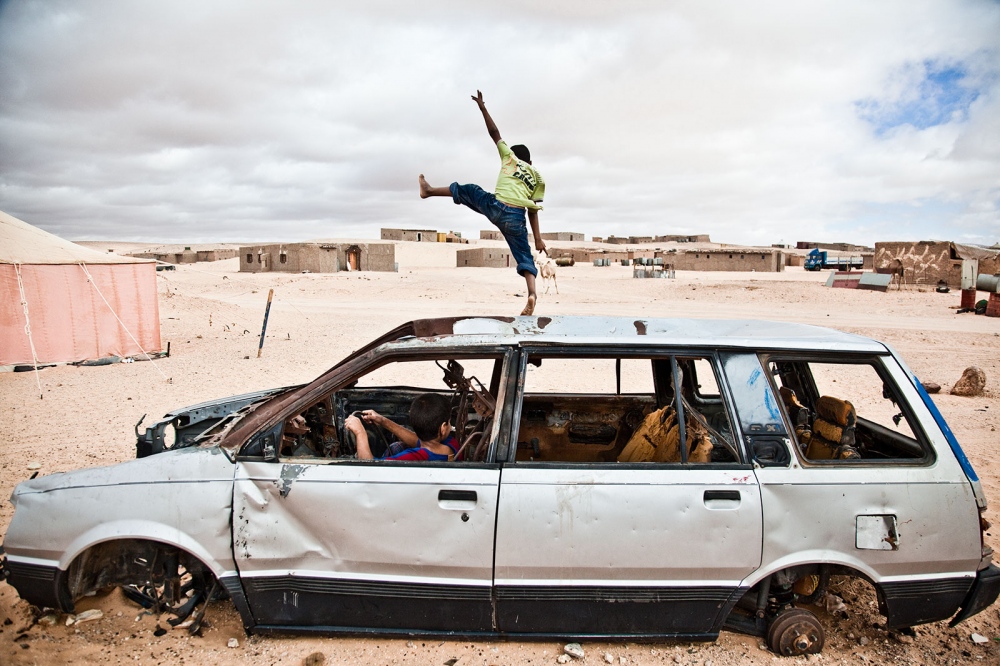 As no playground facilities are to be found in the refugee camps, the occasional scattered car-carcass serves this purpose. 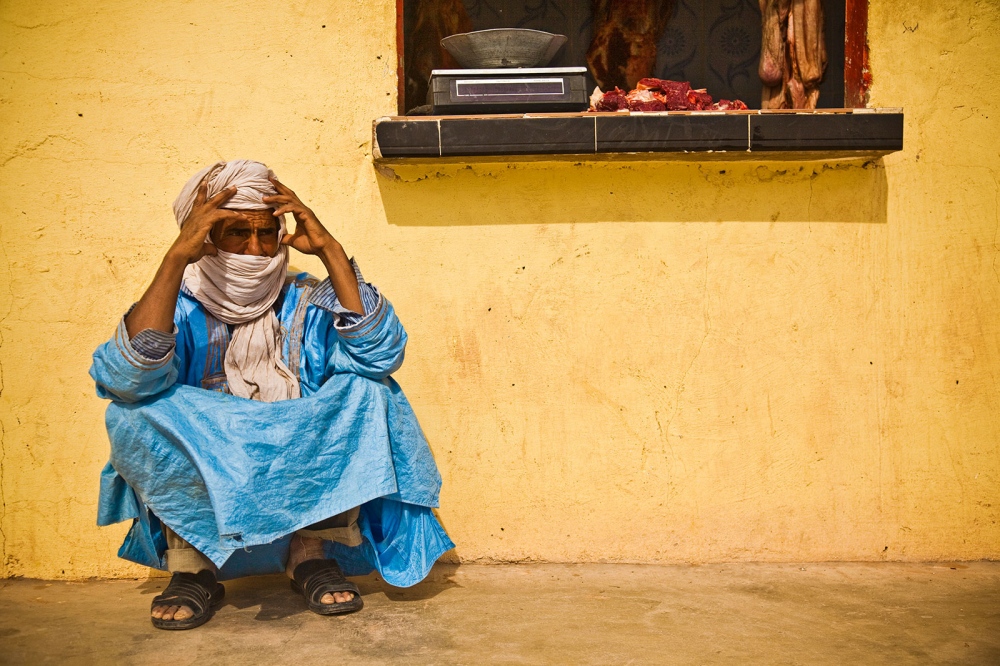 A Saharawi man is seen outside his camel-meat shop in "27th of February" camp. Camel-meat is the only food the refugees are able to produce themselves, as nothing grows in this part of the desert. They still rely heavily on imported food-aid.

As the refugee camps has been here for 40 years, the camps have slowly evolved into becoming reminiscent of small towns. People want to work and with the small capital refugees are able to generate, some have started small businesses, like this man. 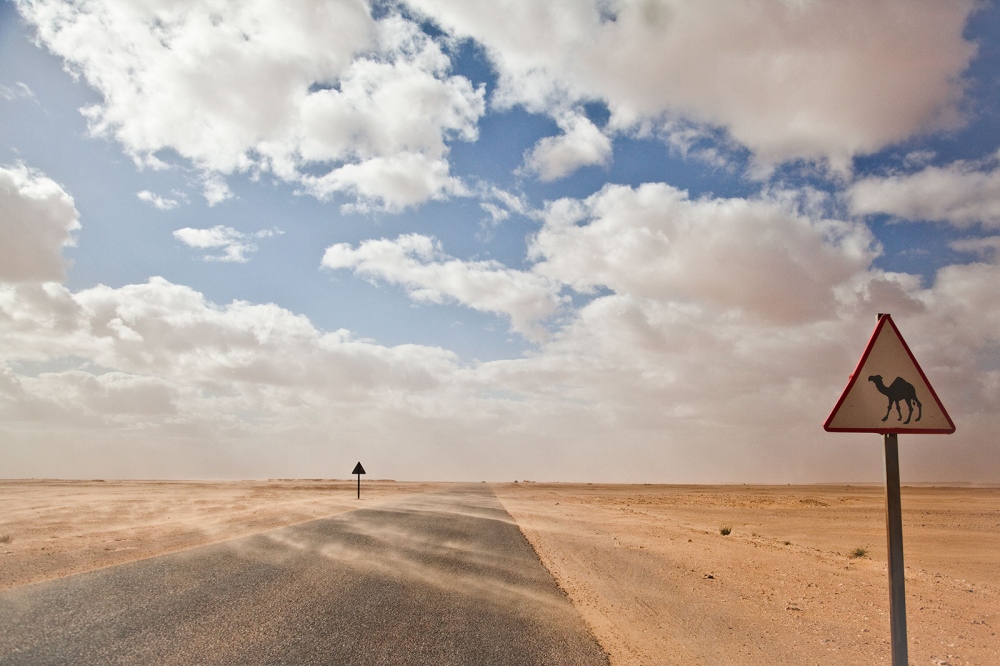 The five refugee camps are separated by hundreds of kilometers desert roads. 300 miles west of the camps lies the liberated territories of Western Sahara. 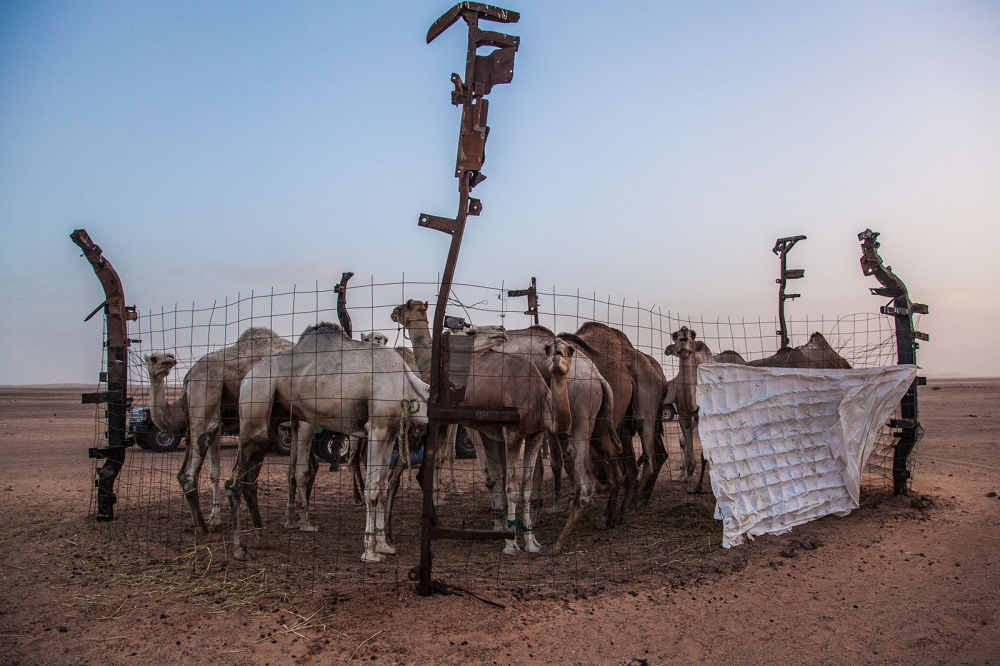 The Saharawis were once free-roaming nomads in the Sahara. But, like their camels, they are today confined to their encampments, unable to leave as they are stateless citizens. 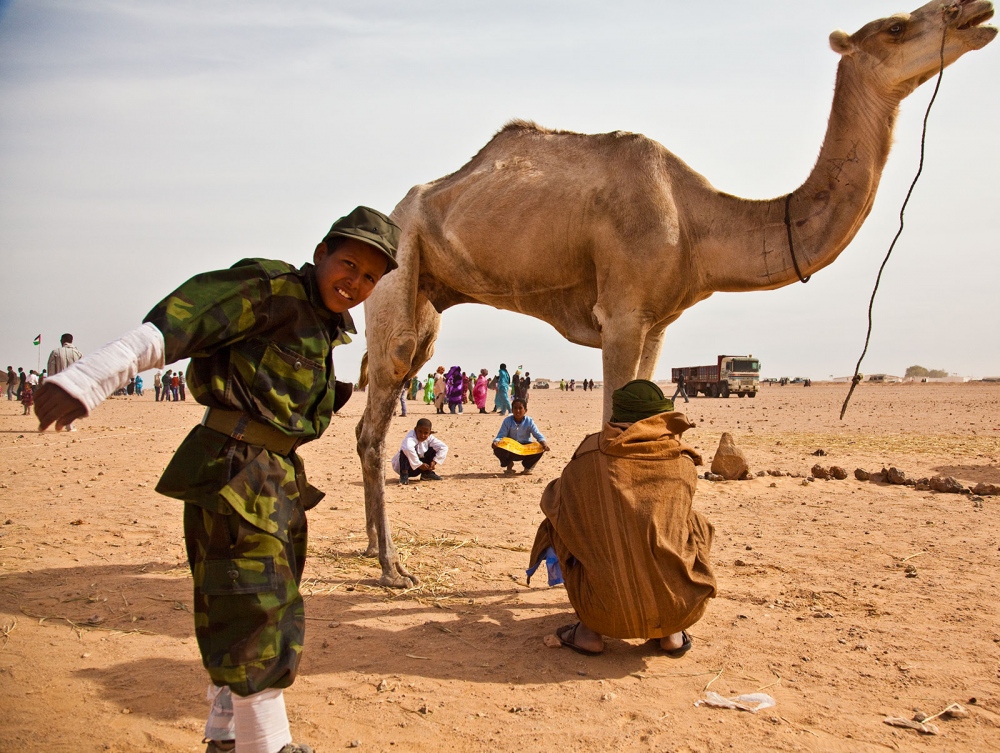 A young boy in a Polisario outfit at a cultural festival at Rabouni camp. He says he wish to join the Polisario resistance army when he finishes his education and is old enough. 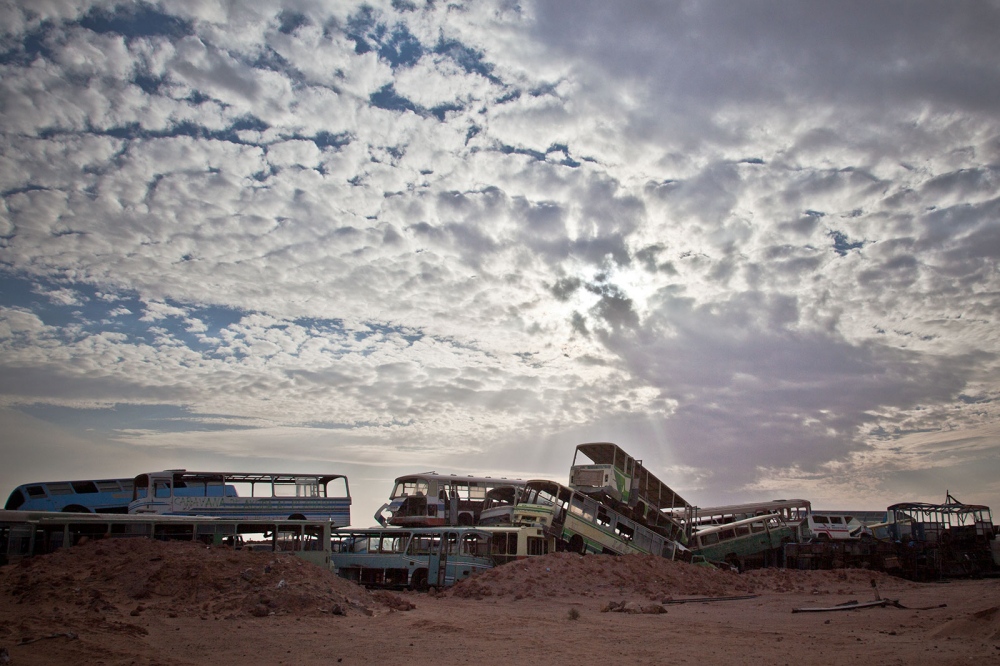 Buses that onced transported refugees through the desert crossing between Morocco and Algeria. 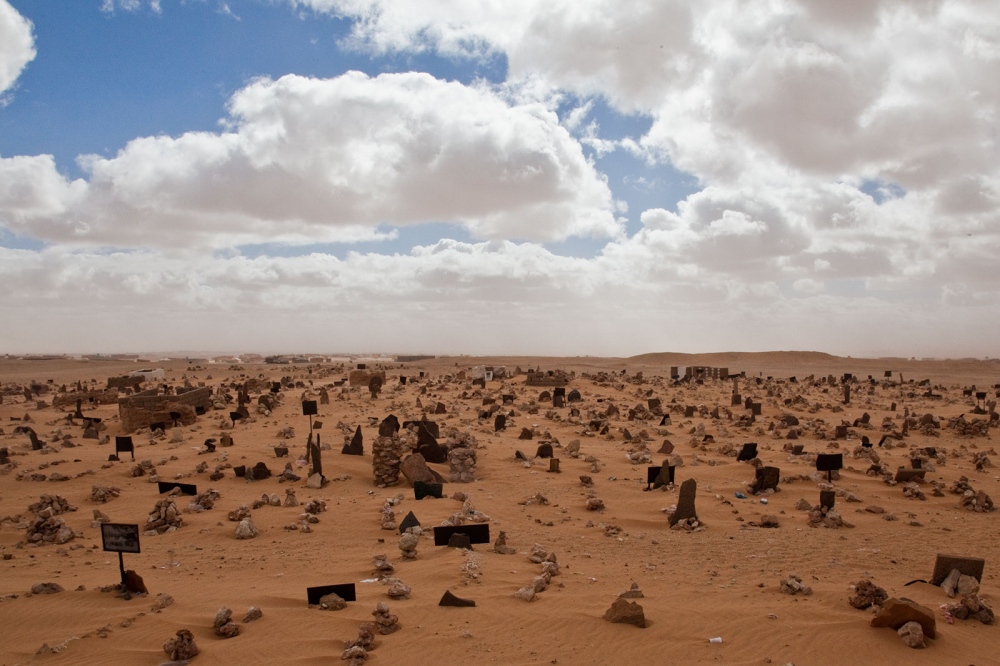 Graveyard for refugees who died outside their home country. 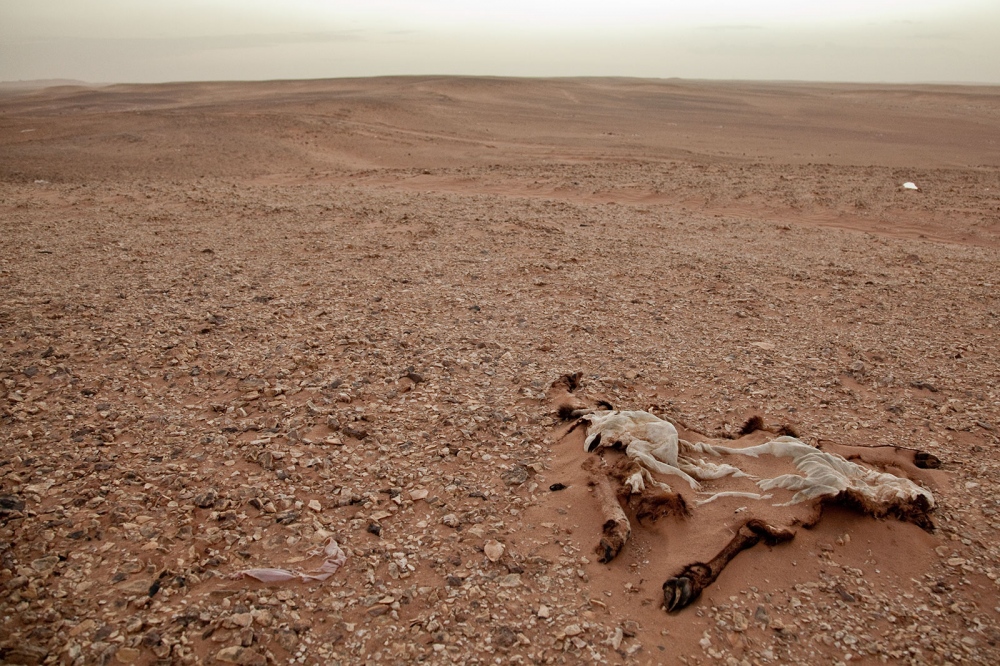 The skin of a dead goat testaments to the inhospitable nature of the hammada desert. 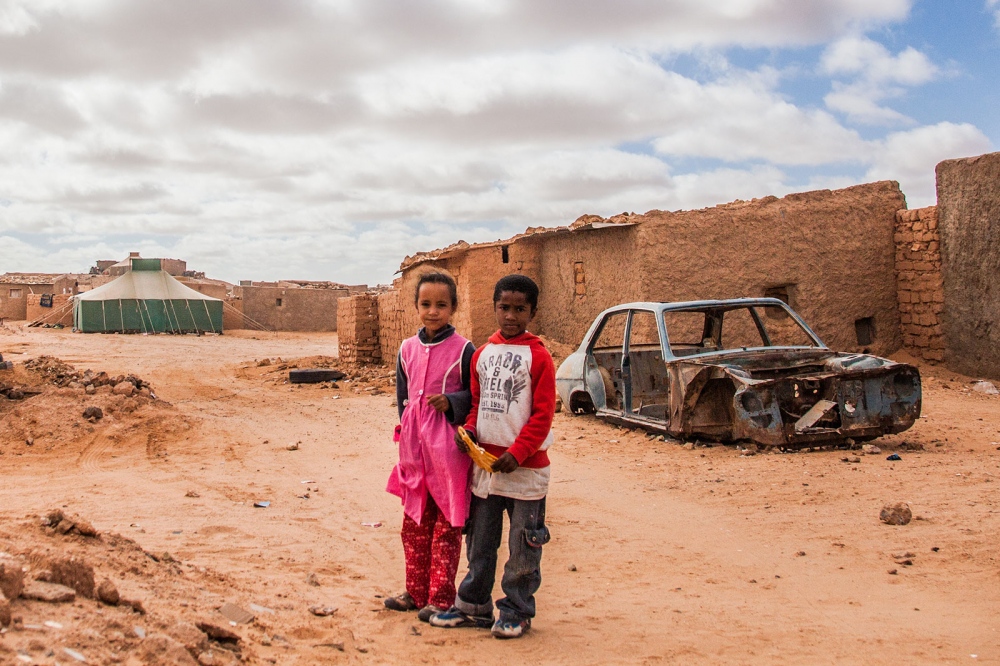 Two kids are seen outside their home (green tent in the background). Bakita (left) says she wants to become a nurse when she grows up, while Hassan would prefer to become a soccer player and play for Los Dromedarios (Western Sahara´s national team) in the world cup.

(Today, the team is not part of FIFA, but rather the New Federations board,which is made up of teams that representnations, dependencies, unrecognized states, minorities, statelesspeoples, regions and micronations.) 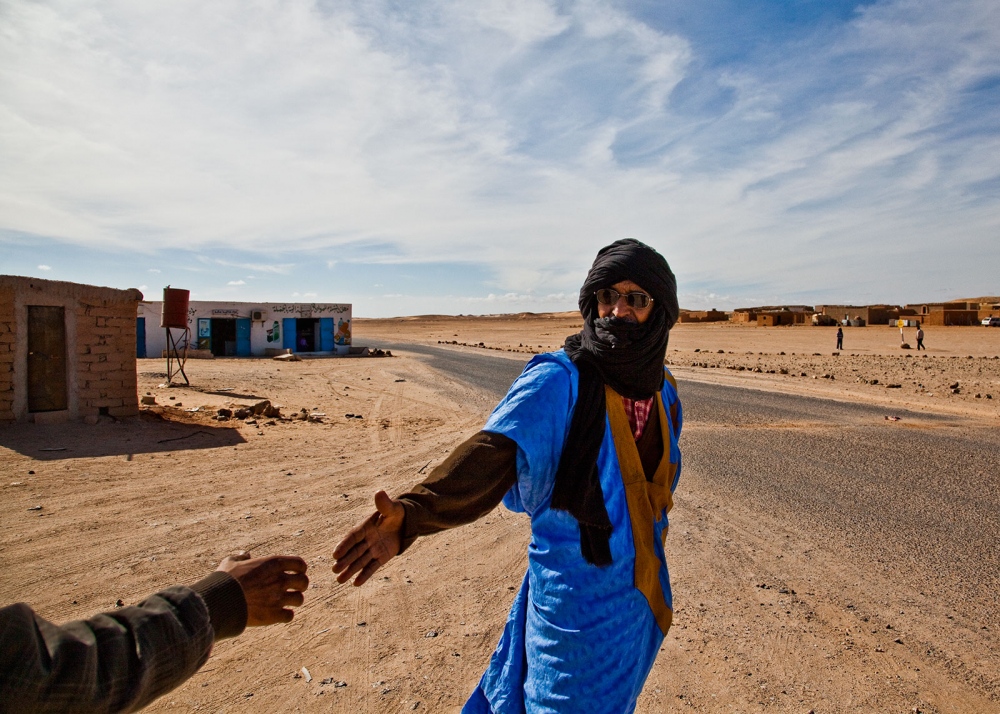 Tariq extends a traditional Saharawi greeting, which lasts up to a minute and includes a series of polite questions regarding family, health, general wellbeing and news. 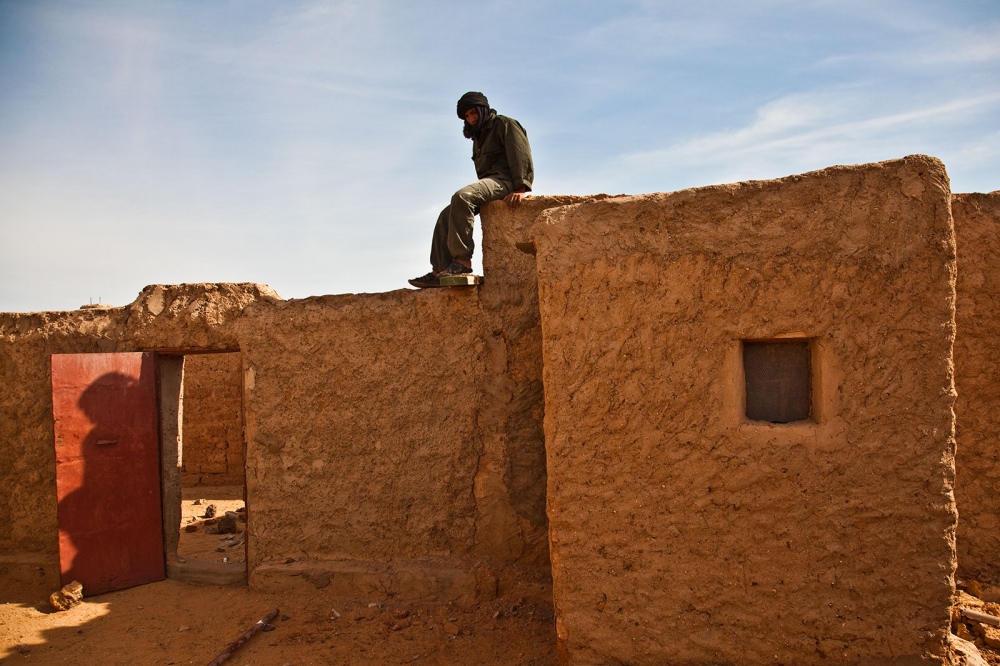 Hakim is "sitting on the fence", unsure whether to remain in the camps or return to the Polisario resistance army.

Most of the male youth raised in the camps, have left for the liberated areas to join the Polisario resistance army. The few ones left in the camps feel a deep frustration over their lack of oppurtunities. 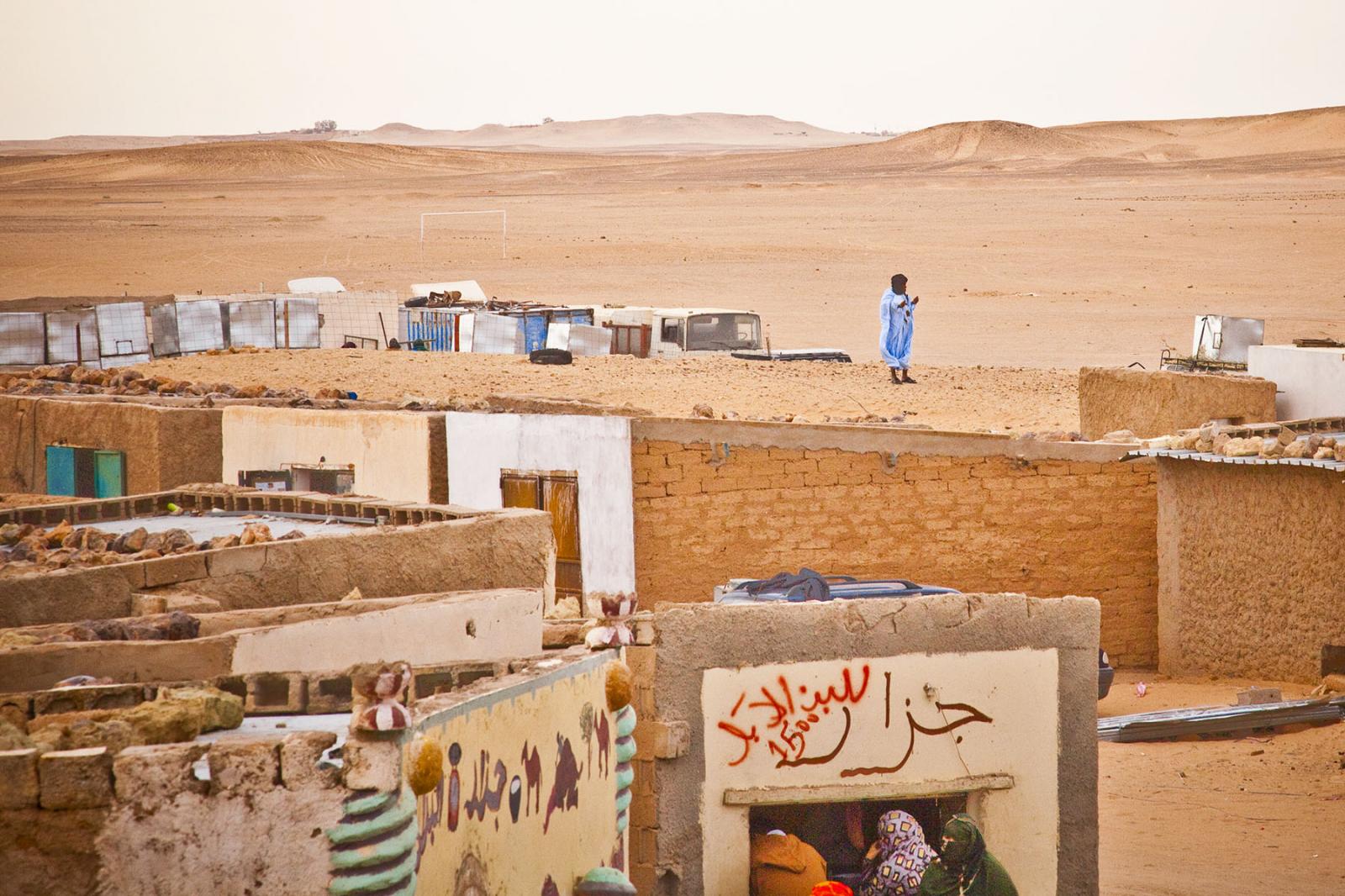 Containers that have carried food-aid to the camps are piling up after 40 years of supplying food for the refugees. Still, large parts of the refugees are malnourished. 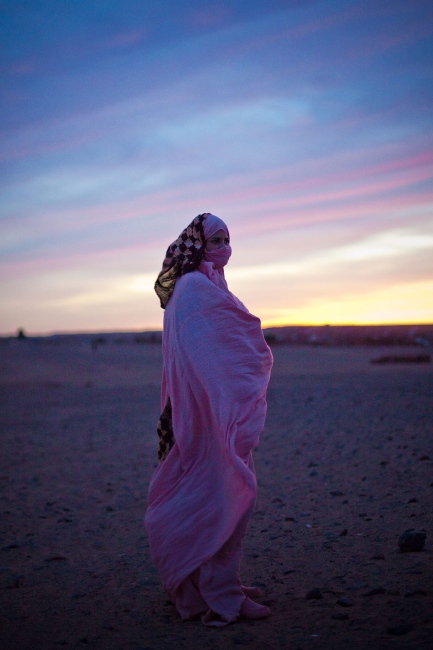 Gazing over Dajla reugee camp, the largest of the reugee camps. The number of refugees in this area is approximately 165.000. 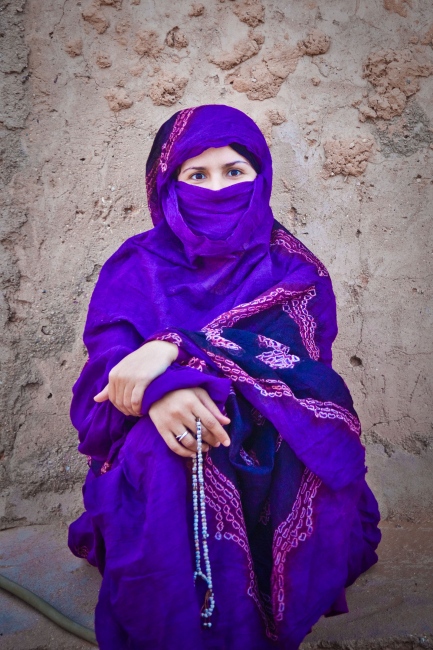 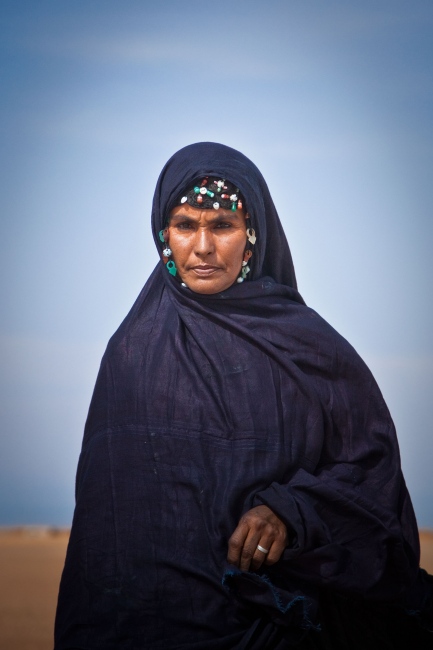 Woman in a traditional dress in Rabouni refugee camp, Tindouf. 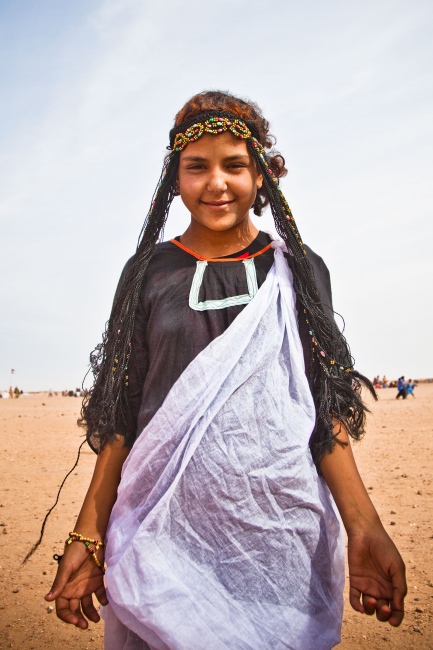 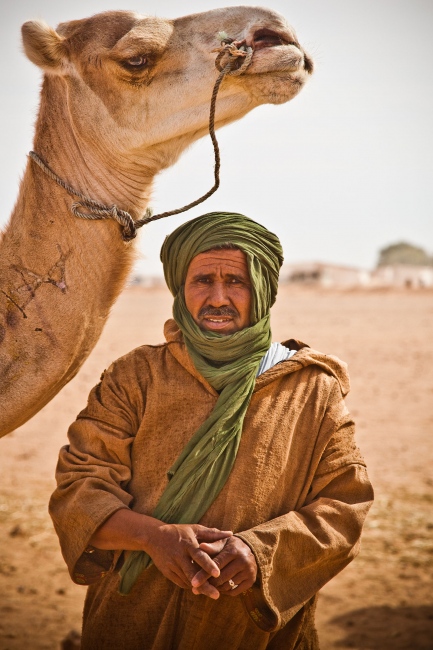 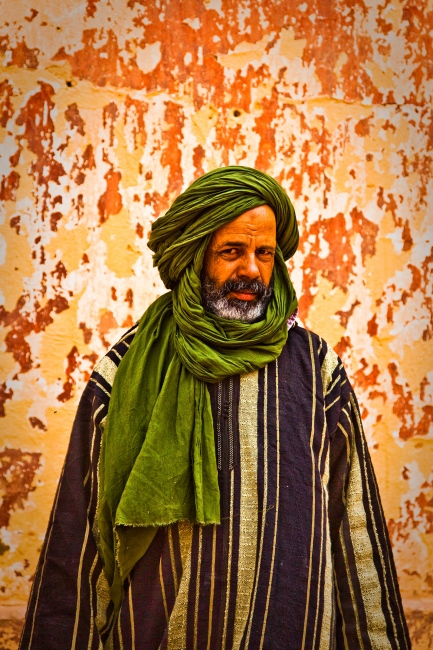 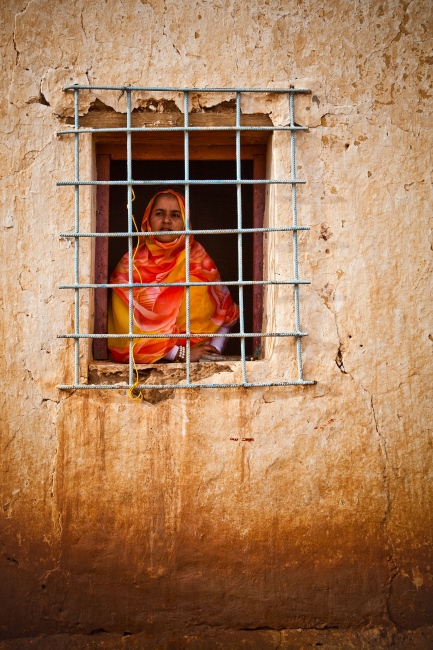 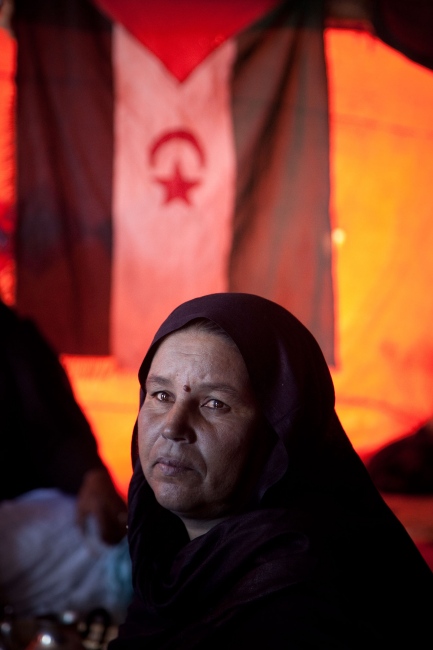 A Saharawi woman in her tent. 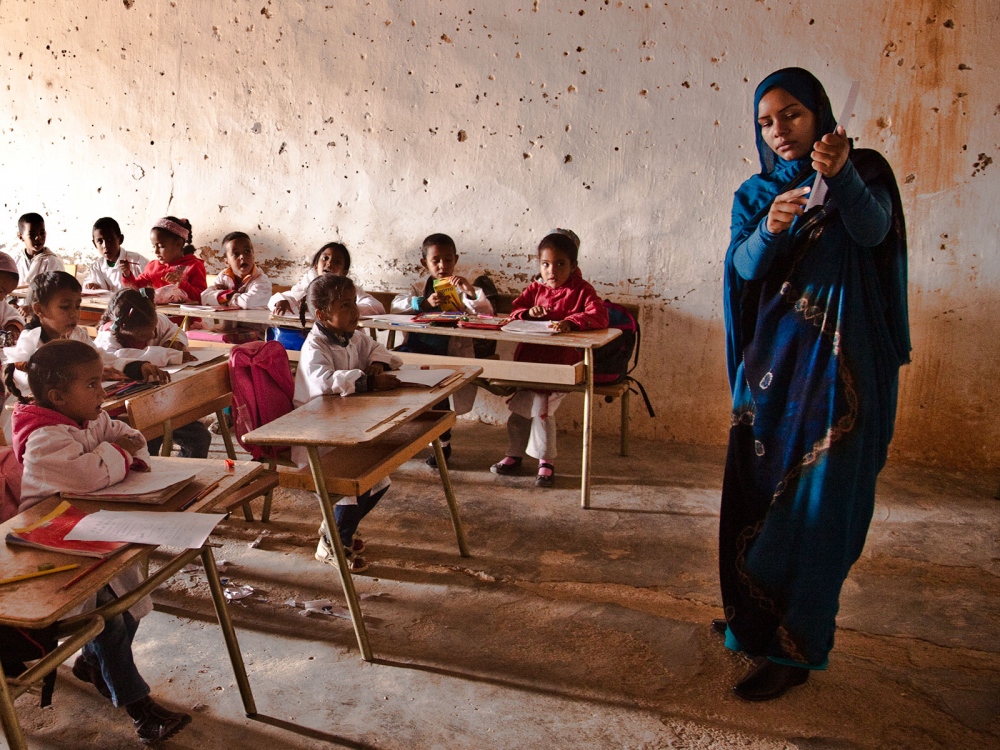 Saharawi schoolchildren undertaking a test. Most of the children here have never set foot outside their camp. The Sahrawi see education as an instrumental mean in fighting for their land, and some get to leave the camps to continue their education in Algeria. 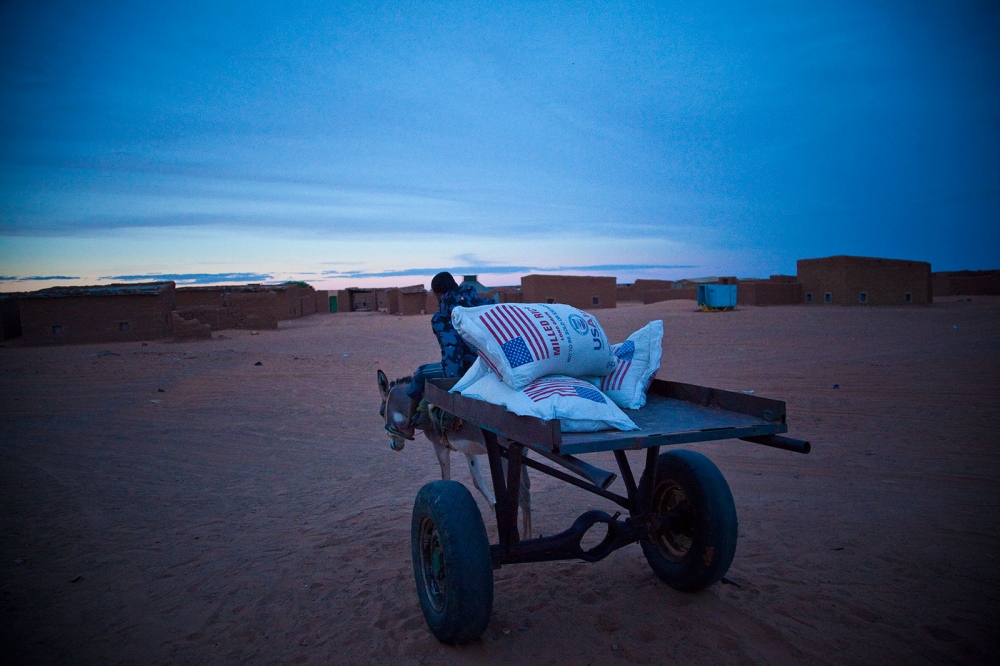 As basic life can not be sustained in this environment, the camps are completely dependent on foreign aid. There is little or no vegetation around the camps and there is little acess to water. 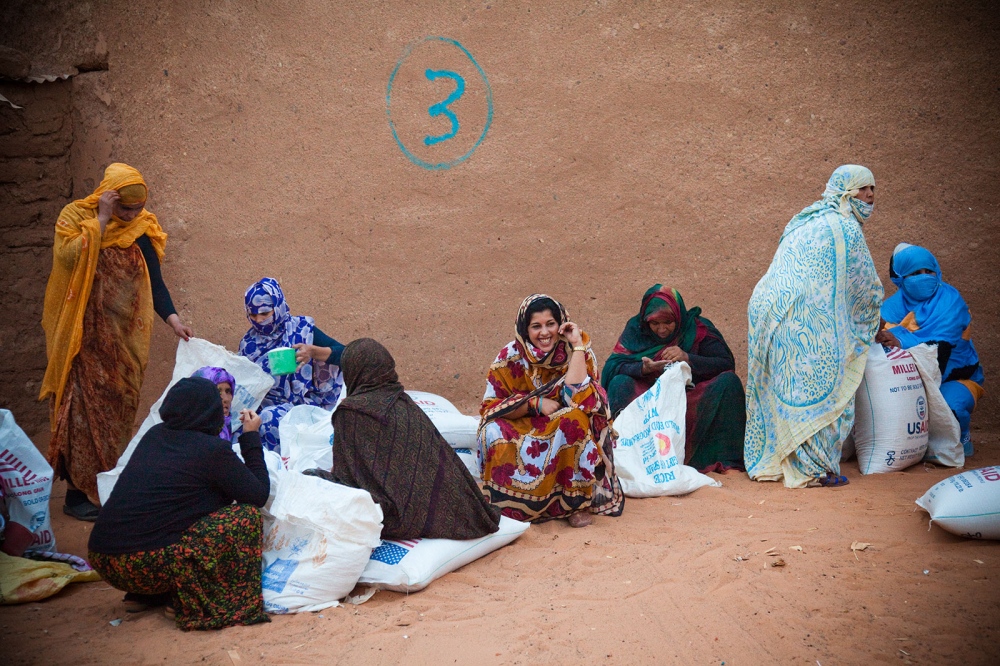 The Saharawi insists on being independent as possible  largely manage the camps themselves. They have taken over most of the tasks from aid-workers, such as food-dispension as seen here. 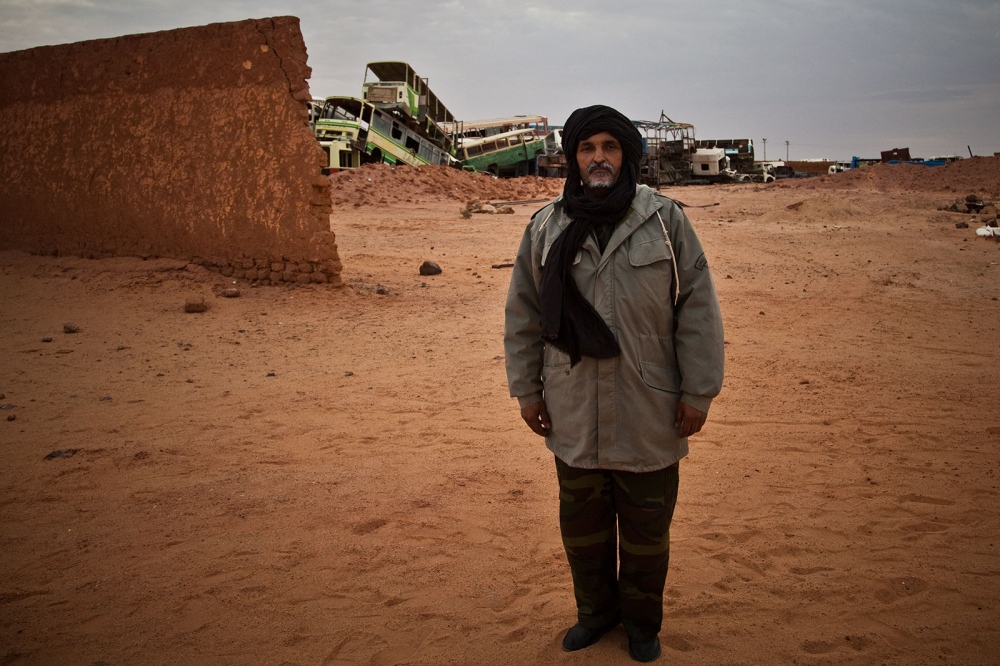 A Polisario army veteran who now runs a small museum of Sharawi history in the refugee camp. 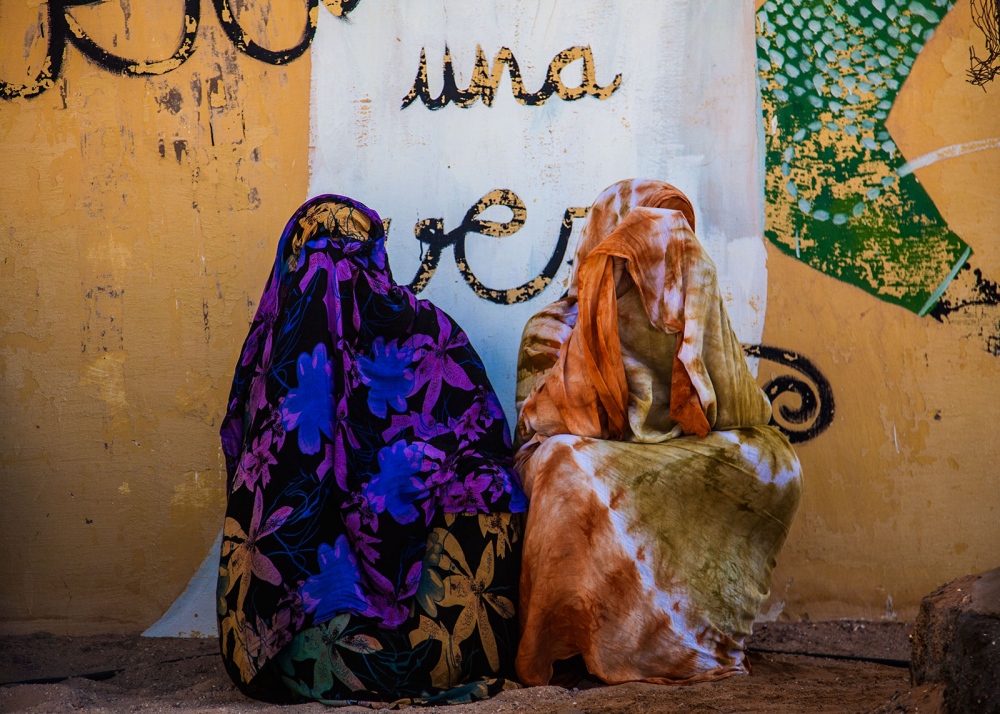 There is often sandstorms and whenever there is a gust of wind, one needs to cover one´s eyes, as two Saharawi women are seen doing here.

Saharawi girl making the peace gesture - which is also the symbol of Western Saharan liberation. 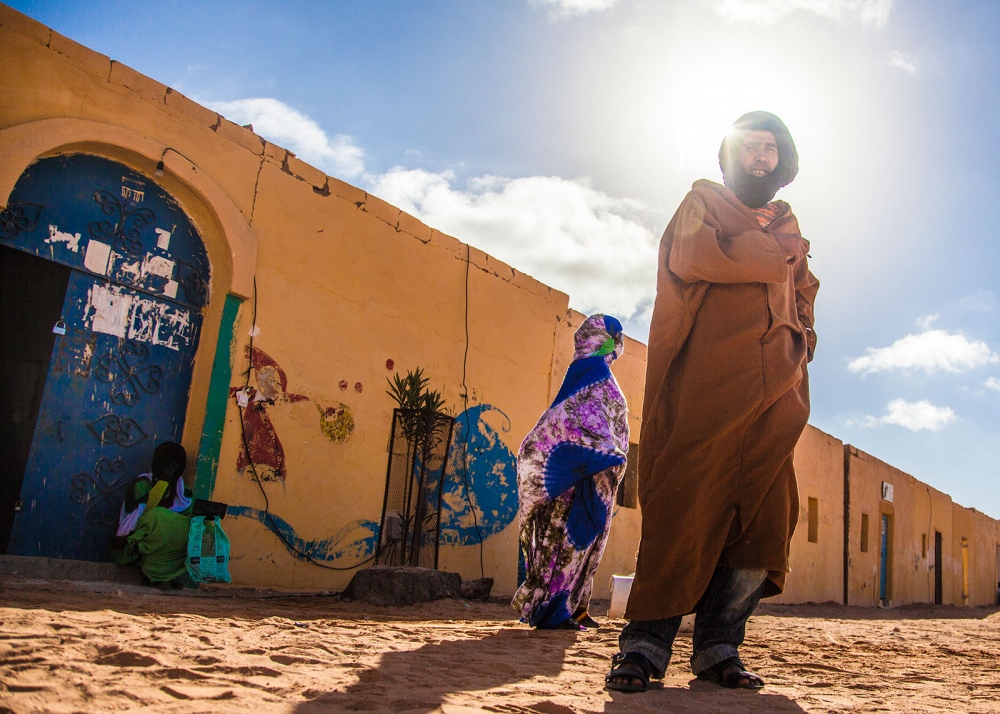 The four main refugee camps are estimated to each house between 40,000 and 45,000 refugees, and are each headed by a governor, with administrative and managerial functions completed by camp residents employed by the Polisario/SADR. Each of the camps is divided into a number of districts, and each district is sub-divided into neighbourhoods. 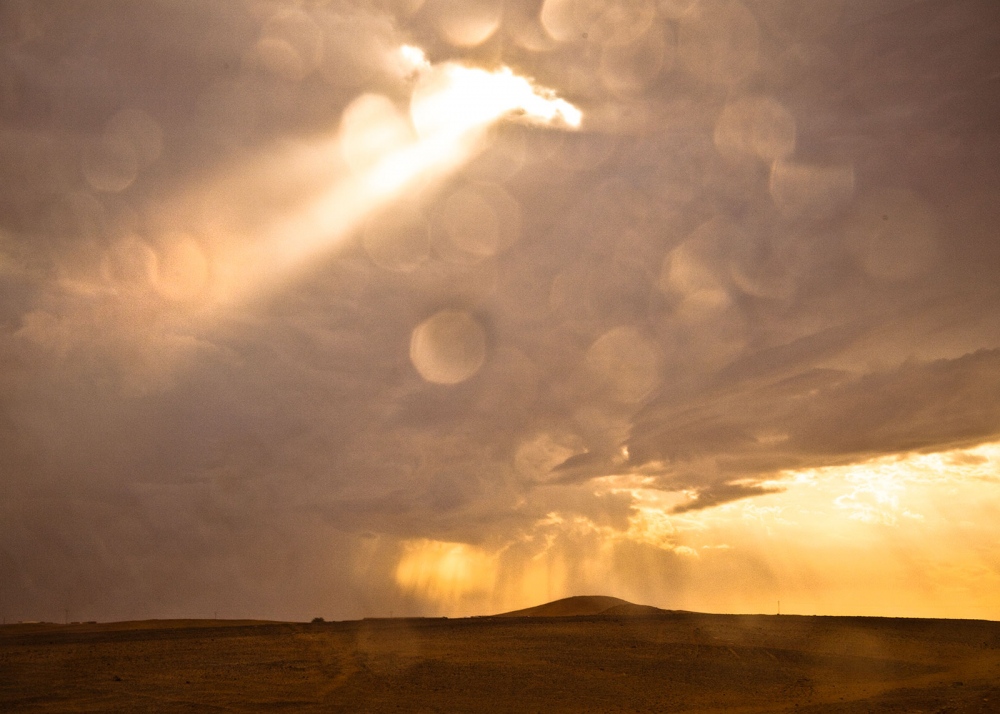 While most of the evening light is in Morocco, a small beam of light breaks though the clouds and light up Tindouf refugee camp. Although rainshowers are extremely rare, it is not welcomed by the people. In 2008 several camps were flooded by a two-day rainshower. 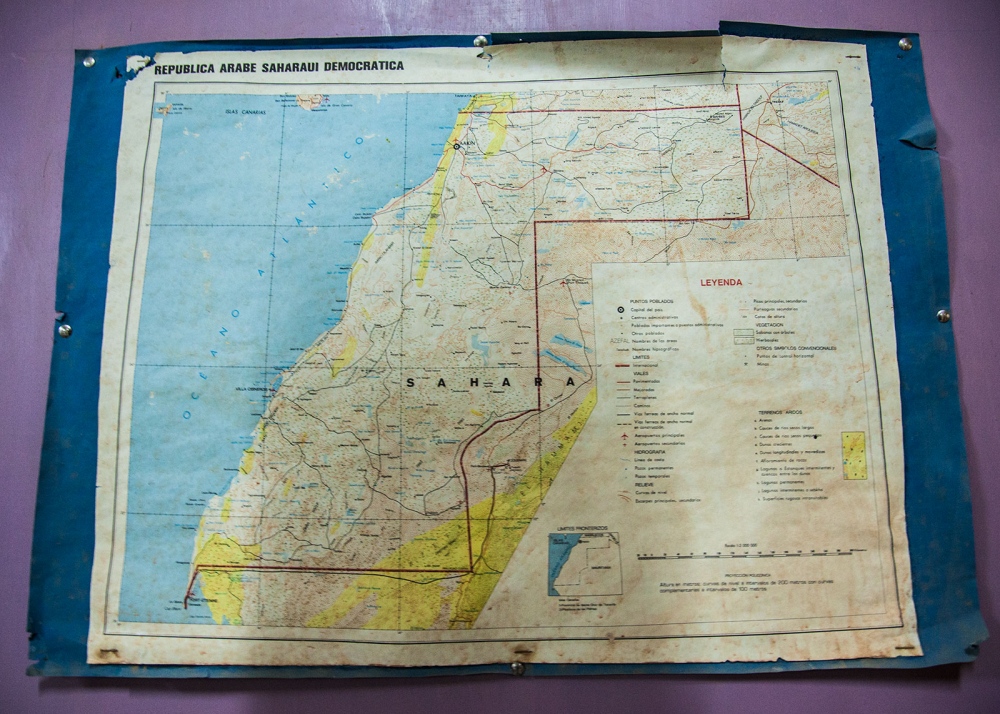 In the barren desert landscape of Algerias southwesternmost corner - an area known as “The Devil´s Backyard” due to its harsh climate - there lies an enclave of refugee camps inhabited by apeople called the Saharawi, meaning “the people of Sahara”. While the Saharawi people is originally a nomadic people and are found in various parts of the Sahara, they are also the original people of the state of Western Sahara. Today, however, most of Western Sahara is occupied by Morocco.

Following Moroccos “Green March”into Western Sahara in 1975, the majority of the Saharawi people were forced to flee, particularly due to Moroccan aerial bombardment, which included napalm and cluster bombs. Morocco then installed the world´s largest minefield and built a 2500-kilometre-long Berlinwall of the desert which cut through Western Sahara, making it the second longest wall in the world (after the Great Wall of China). This wall divided almost every Saharawi family. To this day, 40 years after the invasion, many families remain divided.

The UN resolution process has been at a stalemate for decades; in the Security Council France prevents investigations into human rights violations to be undertaken in Western Sahara; The EU exploits Western Saharan natural resources and undermines UN peace keeping efforts through fisheries-agreements with Morocco which are in violation with international law; the Moroccan government gives tax relief to anyone who will settle down in the occupied territories, while local Saharawis are being discriminated and violently abused; a wide range of multinational companies exploits Western Sahara´s resources, especially large oil companies such as KOSMOS Energy and Total, but also the phosphate resources and agricultural resources are being plundered. Western Sahara was never decolonised from Spain and remains today Africa´s last colony – both on paperand in practice.

From the Western world Western Sahara is experiencing a kind of realpolitik, in which Western governments prioritise geopolitical and economic interests over international law and human rights.

While this forgotten crisis continues to play out below the radar of international media, the hundreds of thousands refugees exiled in the Algerian desert have no other option than to wait and try their best to not lose all hope.