Photographer
Give me Liberty or give me Death
Follow Hire
Profile
Stories (4)
News (1)
Location: Kranj, Slovenia
Nationality: Slovenian
Biography:         Matic Zorman is Slovenian photographer, born in 1986. In 2008 he began his career by contributing news images to a variety of Slovenian newspapers and magazines on a daily basis. His work was published in The Washington... read on 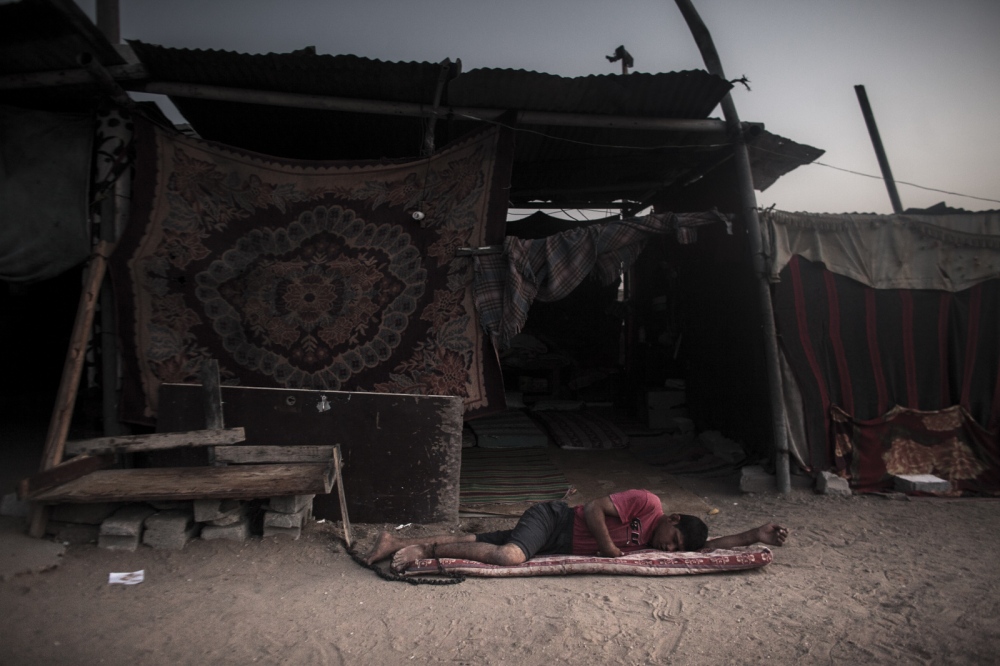 1 of 14 © 2020 Matic Zorman
Beit Hanoun, Gaza - September 27, 2014: A mentally disturbed Sa'd Za'neen lays chained in front of an improvised tent which serves as a temporary home for his family living near the Israeli military border.Having him chained is the only way ensuring Sa'd won't wander off as Za'neen family lost their house during the 2014 war in Gaza and they don't have a home to keep him under control anymore.

Silhouettes of improvised tents draw up in a distance as blankets are spread over few poles, fixed in unstable soil. In front of one tent lays a man, a chain leads from his ankle to a wooden bench.

“Don’t wake him up”, warns older woman coming from the tent. “Sa'd is my son, he’s asleep and let him sleep. When he is awake he is suffers.” She introduces herself as his mother. “Sa'd is mentally disturbed, but until the war, we didn’t have to chain him like he would be an animal! That ruins you see if you turn around, were our house once. Now we don’t have a home. Before the war, Sa'd was kept in his room, but what is left for us to do here? We live in this tent, about a kilometer from border with Israel. We cannot let Sa'd to roam freely, as he could get shot by snipers. He is chained here for his own safety! I don’t even want to tell you anything more, even if you will publish our story, nothing will change for us”.

As she would lose thousands of battles each day, she stooped and angrily moved back into the tent. 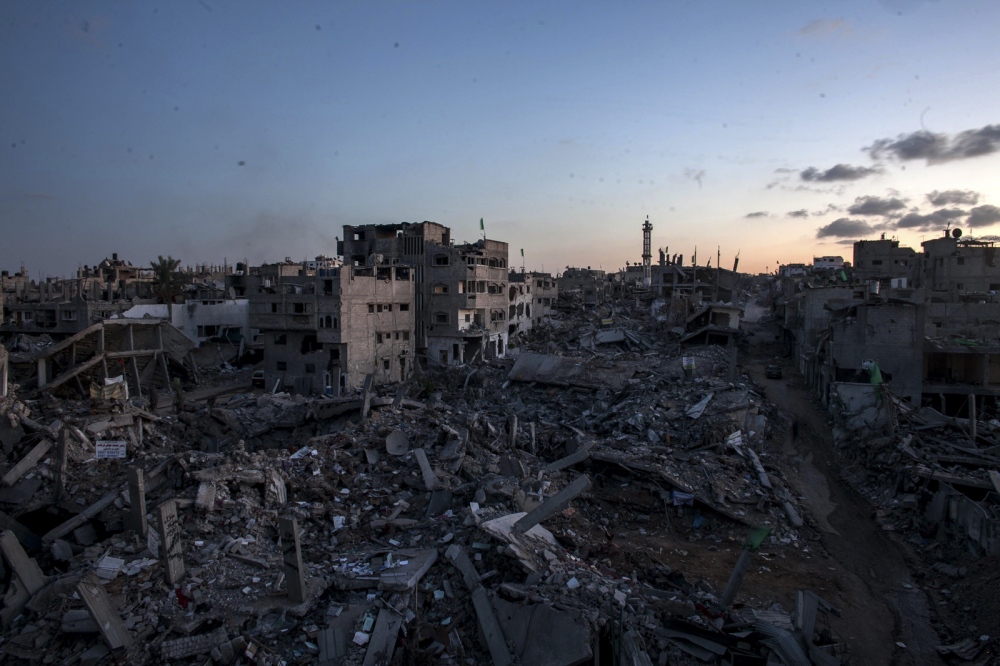 3 of 14 © 2020 Matic Zorman
Gaza, Shujai'iya - September 18, 2014: Remains of what was Shujai'iya neighbourhood east of Gaza city, after it was targeted by Israeli military forces during the war in 2014. Air strikes on Sujaia have killed 60 people, injured hundreds leaving the area devastated rendering thousands displaced. 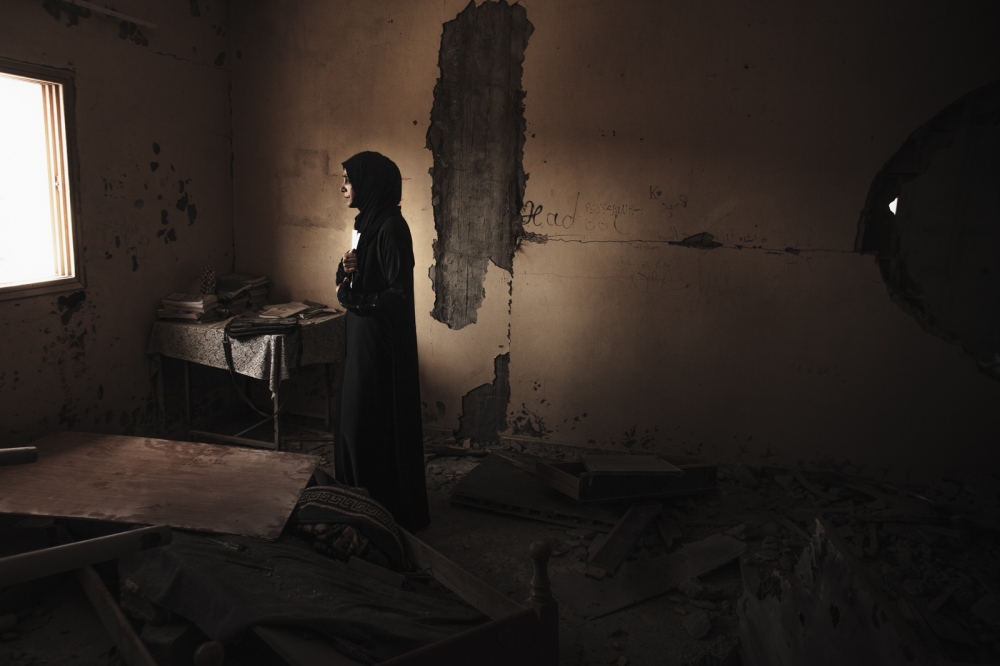 4 of 14 © 2020 Matic Zorman
Khan Younis, Gaza - September 27, 2014: Fatima Asfour amidst the ruins of her apartment in Khan Younis, Gaza, holds photographs of her two sons, Ramez (26) and Ahmed (25), both feared dead after the sinking of a ship of the coast off Malta. To date she still didn't receive any official news regarding their fate as they fled Gaza in September with intention to reach Europe.

"They both had Europe on their minds.”

Last time she spoke with them was on 6th of September.

“They call my sons and others illegal immigrants but they never ask what pushed them into fleeing. We in Gaza live under illegal occupation, this entire situation is a crime against humanity!”, she was angered.

A soft and warm sunlight shines through a window of once beautiful house, revealing the reasons for their escape. In a middle of the damaged room, next to a broken table lies a canvas with unfinished painting on it. Ramez’ auto portrait. Like his life out of Gaza, it is left unfinished. 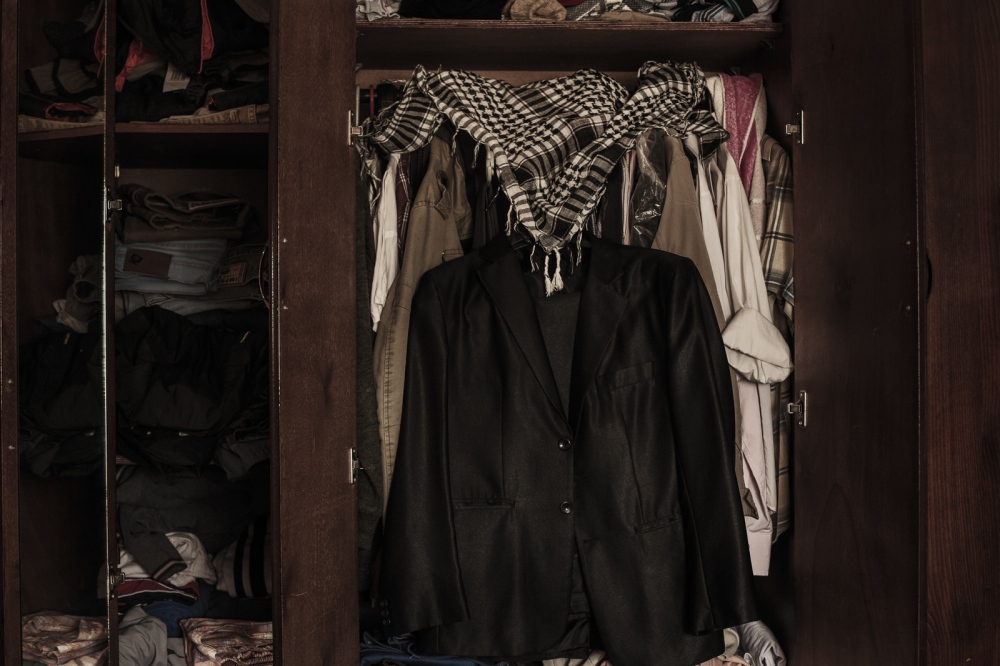 6 of 14 © 2020 Matic Zorman
Khan Younis, Gaza - September 27, 2014:  Clothes of Yahya Abu Sabha (31), an immigrant who fled Gaza and was later shot by unknown attackers in Northern Sinai in the mid-September while returning from Egypt to Gaza. As Yahya reached Egypt his family convinced him to return to Gaza after they received dreadful news of mass drownings in the Mediterranian sea.On his way back to assure his family of his safety he was shot in a crossfire in Northern Sinai. 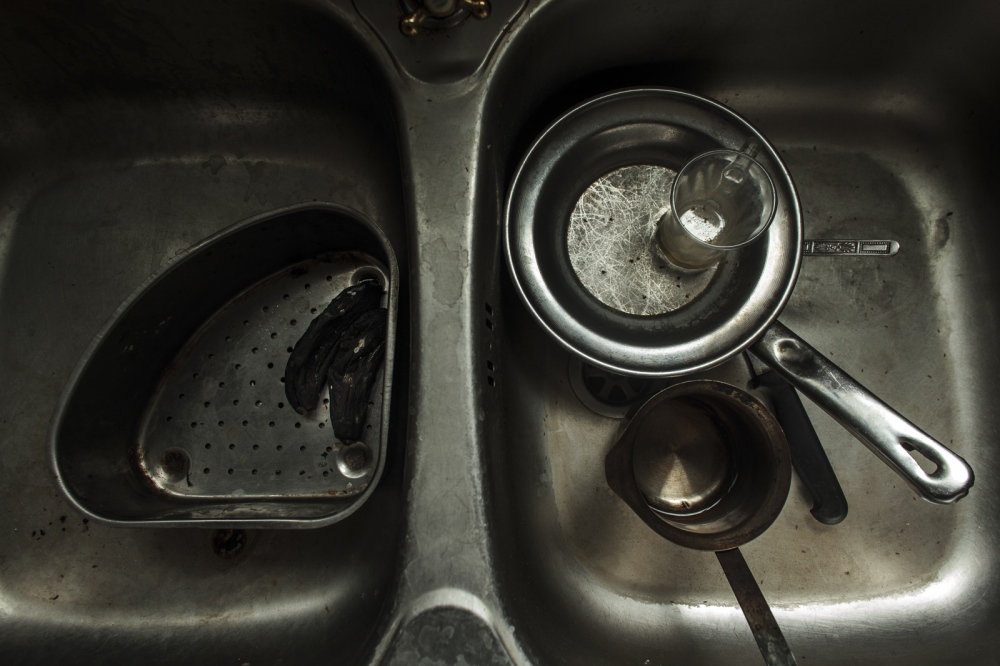 7 of 14 © 2020 Matic Zorman
Khan Younis, Gaza - September 27, 2014: Cookware lays abandoned in the sink in the house of Yahya Abu Sabha since the moment his wife received news about his death. As Yahya immigrated to Egypt, his family convinced him to return to Gaza after they received dreadful news of mass drownings in the Mediterranian sea. On his way back to assure his family of his safety he was shot by unknown attackers in a crossfire in Northern Sinai. 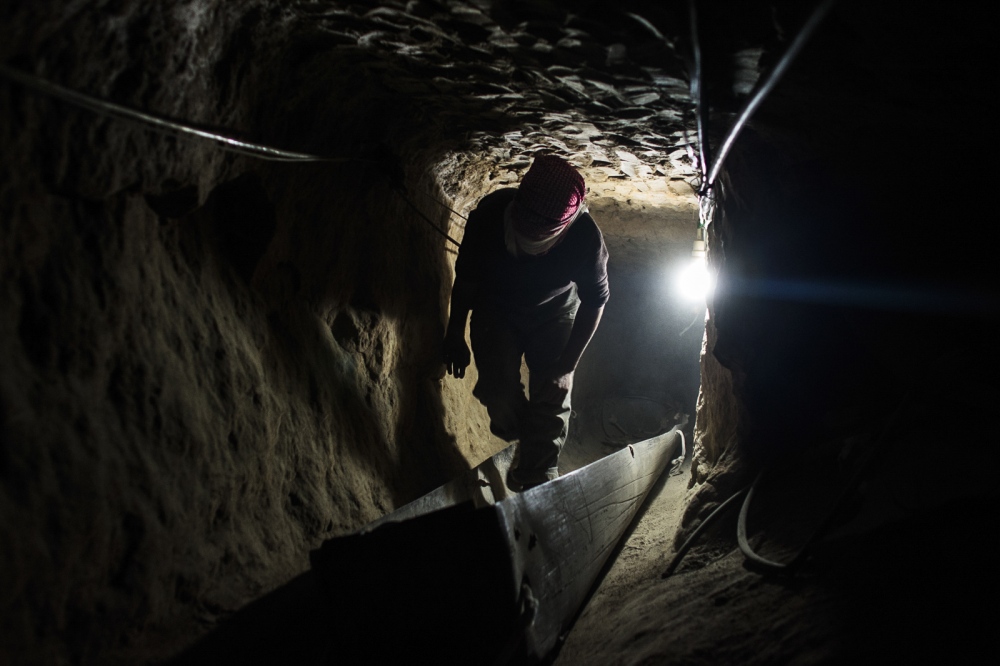 8 of 14 © 2020 Matic Zorman
Rafah, Gaza - January 2, 2011:  An unidentified smuggler walks through an underground tunnel below border of Egypt and Gaza. Tunnels serve as an illegal passage to Egypt for numerous Palestinians which try to flee Gaza. 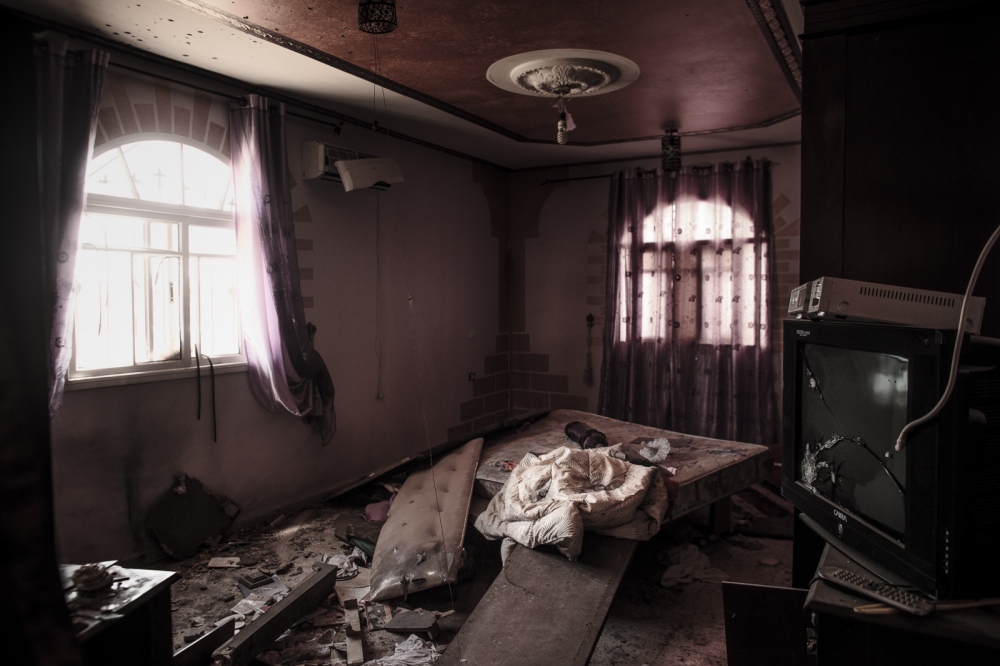 9 of 14 © 2020 Matic Zorman
Khan Younis, Gaza - September 22, 2014:  Partially damaged house of Najjar family is left abandoned after a presumable slaughter of civilians took place, as reported by locals of a town of Khan Younis in Gaza, from where most of Palestinians flee from. During the operation dubbed Protective edge in Gaza in 2014, about 100,000 homes were destroyed or damaged, rendering nearly one in three of Gaza population displaced and in urgent need of a humanitarian help according to UN. 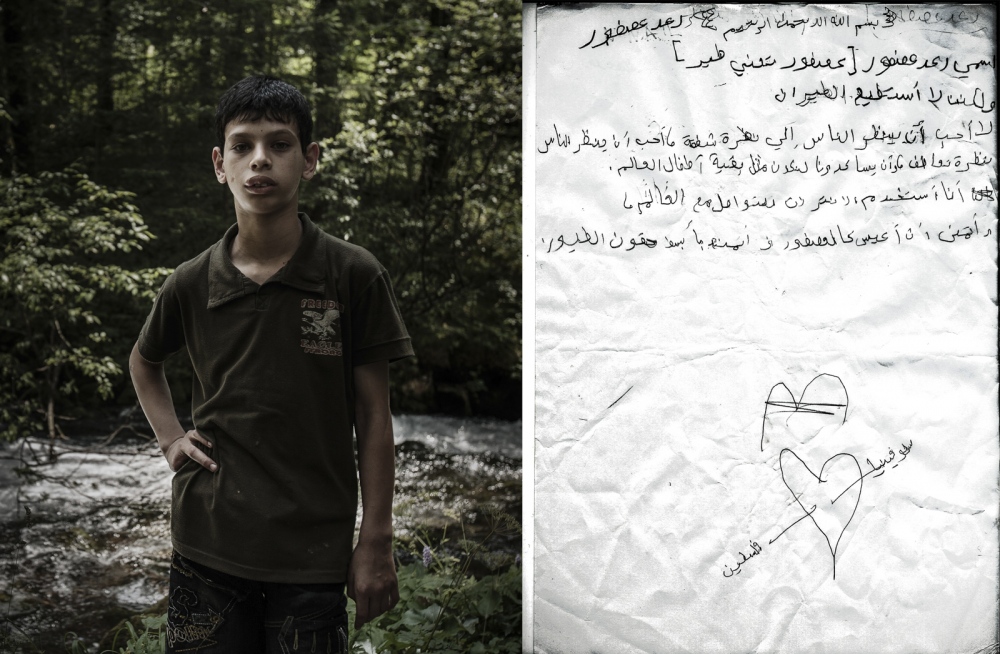 10 of 14 © 2020 Matic Zorman
Kamniška Bistrica, Slovenia - July 3, 2010:  RIGHT: Portrait of Rae'ed Asfour, who drowned in Mediterranean sea on September 6, 2014 while attempting to flee from Gaza. LEFT: A scanned letter Rae'ed wrote in 2010 during his rehabilitation stay in Slovenia. Letter reads: ”My surname (Asfour) translates a bird from Arabic. But I cannot fly or even move freely. I don’t want people to look at me with pity. I just want them to sympathize with me, and help me to feel I am normal like other children around the world. I use internet to communicate with the outside world and I wish to live like a bird and enjoy our basic rights. Palestine-Slovenia." 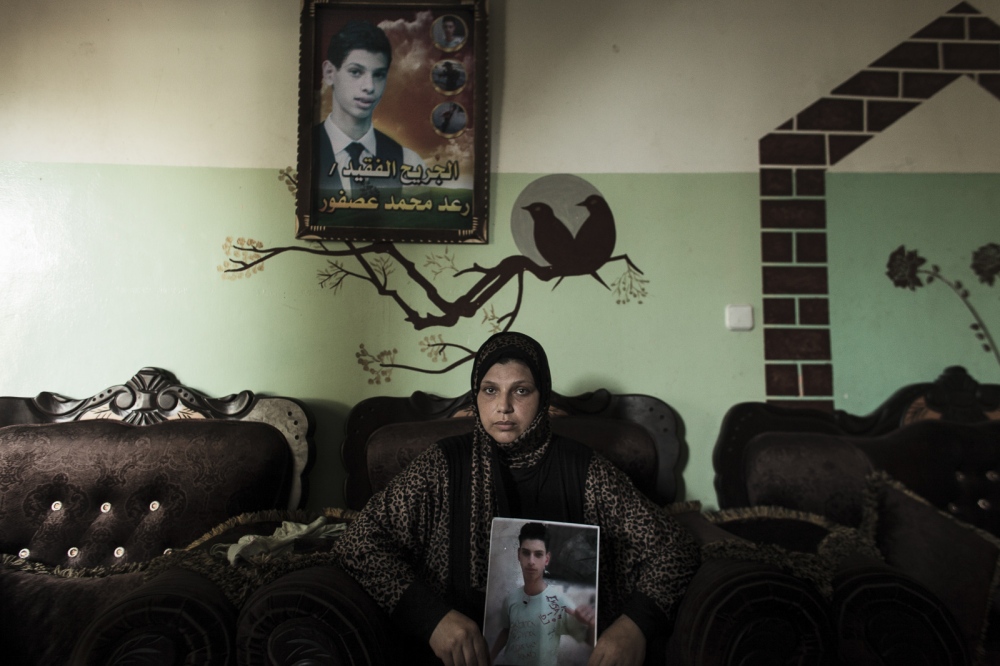 11 of 14 © 2020 Matic Zorman
Khan Younis, Gaza - September 27, 2014:  Portrait of mother of Rae'ed Asfour. She is one of the numerous mothers awaiting for any official information of her child's death. Rae'ed was on a ship that sank in the Mediterranean on September 6. He was included in the rehabilitation program after sustaining injuries in Israeli military operation on Gaza in 2009. At age of 16 he fled Gaza with intention to live with his father in Norway. Rae'ed's commemoration photo is seen hanging on the wall. 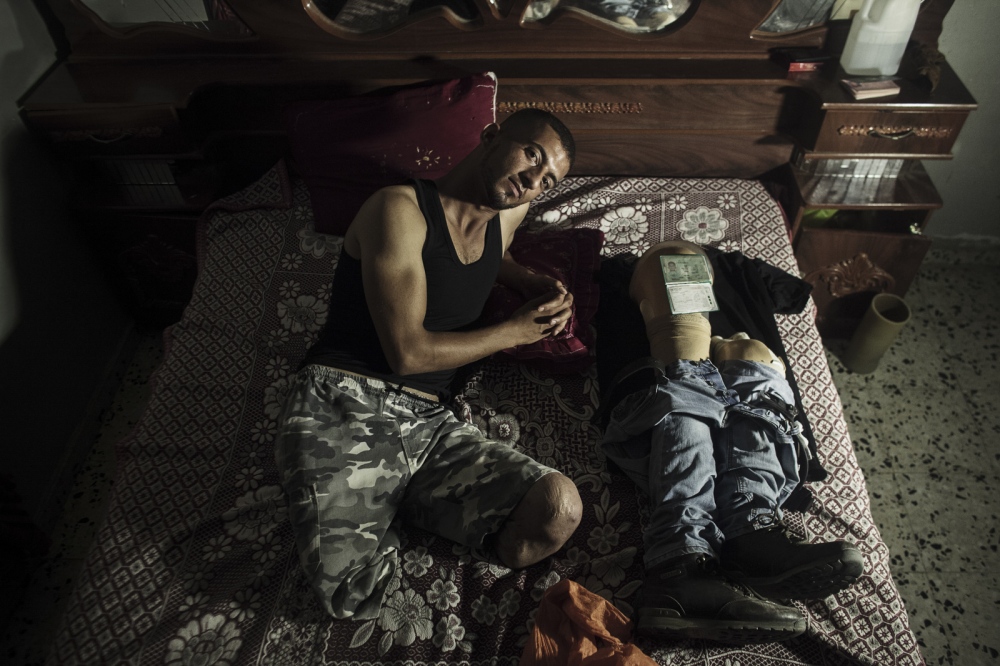 12 of 14 © 2020 Matic Zorman
Khan Younis, Gaza - September 25, 2014: Amar Abu Assi (22) in his temporary home in Khan Younis. He fled Gaza on a wheelchair taking with him only his prostheses, fake passport and clothes he was wearing at the time. Amar was arrested in Libya and returned back to Gaza. He was intended to reach a ship carrying illegal immigrants which was later deliberately rammed by human traffickers and has capsized in the Mediterranean. Amar is contemplating another escape.

“I left Gaza at night through a tunnel with a group of 20-30 people. On the other side cars took us to Alexandria, where we met more immigrants. We were split. Some people stayed in Egypt and the rest of us were taken to a town Sallum, from where we crossed into Libya. We had to pay another 500 dollars to a new gang of traffickers. They also charged me for my legs. All the way we were treated very badly. Some people were robbed and left behind. We heard stories about people disappearing in the desert and were terrified.”

Amar took a deep breath and shrugged his shoulders.

“But you know, all in all it was worth to try. I still want to go to Europe. There I can find work and get new legs.” 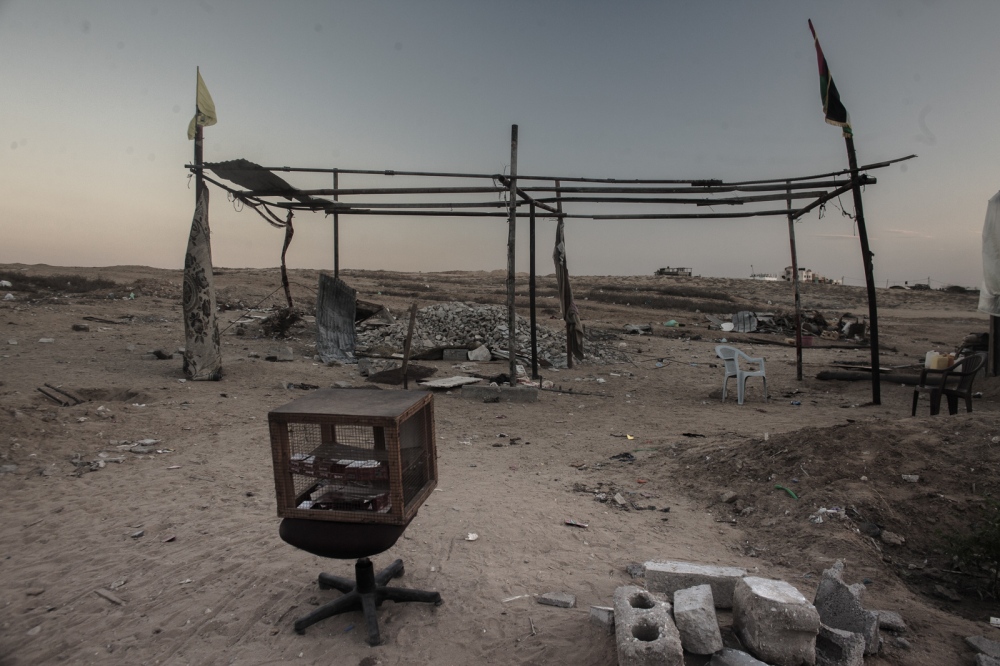 14 of 14 © 2020 Matic Zorman
Beit Hanoun, Gaza - September 30, 2014: Metal poles remain as an improvised tent was abandoned by a family residing in it.
Public Story
Give me Liberty or give me Death
Credits: matic zorman
Updated: 01/17/16
Location: Gaza
Archived as:  post war, aftermath, gaza

Give me Liberty or give me Death is the testament of those people, uprooted by war - refugees - who were forced, in ultimate stages, to equal death with liberty.

Over the Mediterranean Sea, a mixture of matters such as impotent politicians, human traffickers' greed, fear and apathy, has formed a deadly vortex which has already swallowed - in 2015 - the lives of more than 3100 refugees. All of them risked death only to reach life in Europe.

Some of the first refugees who began this deadly journey were the ones who fled Gaza's post-war in September 2014.

“Give me liberty or give me death” project documents deadly immigration from post war Gaza with close up and personal accounts of migrants and their family members left in behind in Gaza still awaiting official information or any news regarding the faith of their loved ones, who disappeared either in the desert in Egypt or Libya or in the Mediterranean while trying to flee to Europe.

By Matic Zorman / Gaza — Faces of war project documents juvenile and teenage rehabilitates during their stay in Slovenia and follows..
Jan 22, 2016

By Matic Zorman — Reportage bears title "The Balkan Nights", as it covers the plight of refugees on their route from..
Jan 17, 2016