Photographer
Faces of War
Follow Hire
Profile
Stories (4)
News (1)
Location: Kranj, Slovenia
Nationality: Slovenian
Biography:         Matic Zorman is Slovenian photographer, born in 1986. In 2008 he began his career by contributing news images to a variety of Slovenian newspapers and magazines on a daily basis. His work was published in The Washington... read on 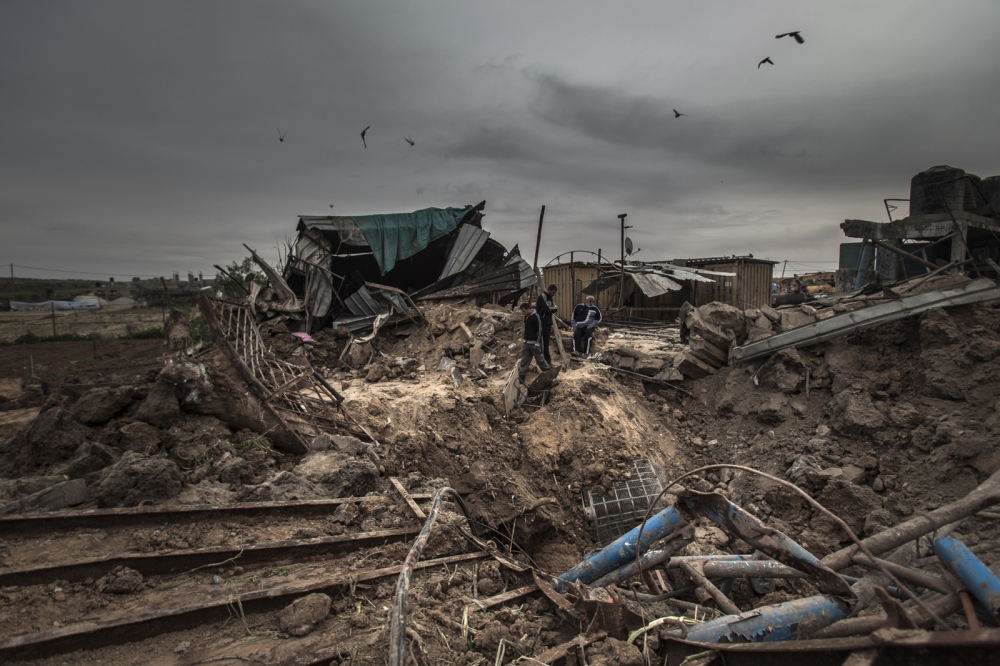 1 of 16 © 2020 Matic Zorman
Gaza City, Gaza - February 12, 2012:  Relative of a Palestinian farmer killed during Israeli Air Force bombing inspect ruins of his farm after it was hit on Feburary 2012. As tensions between Israel and the Hamas government escalated in Gaza on February 2012, some of the farms were targeted as Israeli military forces suspect them of being potential weapons depots. 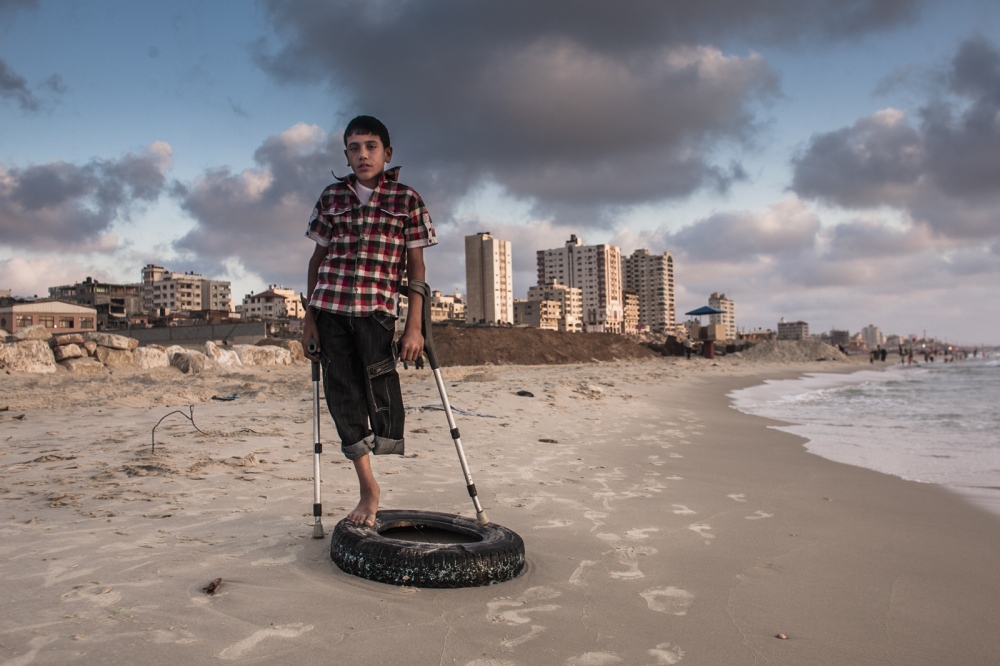 2 of 16 © 2020 Matic Zorman
Gaza City, Gaza - June 7, 2011:  Fadi Al-Arir poses for a portrait on a beach in Gaza City, Gaza Strip. Fadi injured his leg playing football in his home in December 2008. Due to inadequate medical treatment and rehabilitation, Fadi’s broken leg had to be amputated due to gangrene infection. During the Israeli military operation dubbed Cast Lead in December 2008 and January 2009, hospitals in Gaza were overcrowded causing insufficient availability of medical care. In 2010 Fadi was part of the Slovenian University Rehabilitation Center Soča program for juvenile victims of war where he was taught to use prosthetic legs, which he outgrew after a year, rendering it useless. 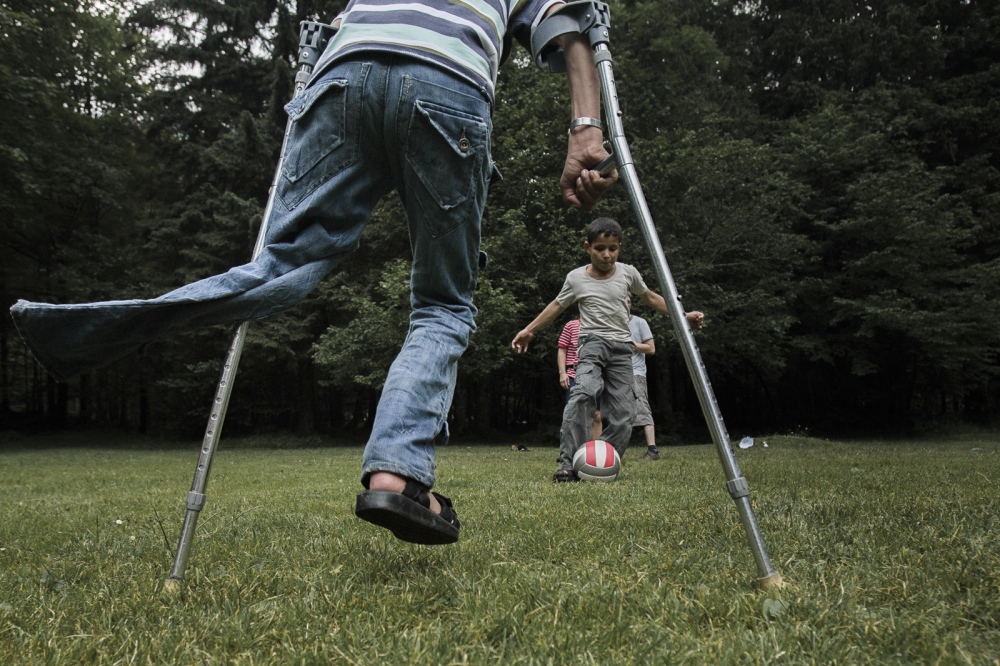 3 of 16 © 2020 Matic Zorman
Kamniška Bistrica, Slovenia - June 3, 2010: Fadi Al-Arir plays football with Abdalah Al-Samuni, both juvenile victims of war in Gaza, as they try to overcome their disabilities during their rehabilitation period at the University Rehabilitation Center Soča in Slovenia. Fadi's leg had to be amputated due to gangrene infection. During the Cast Lead military operation in Gaza strip, 21 Al-Samuni family members were killed 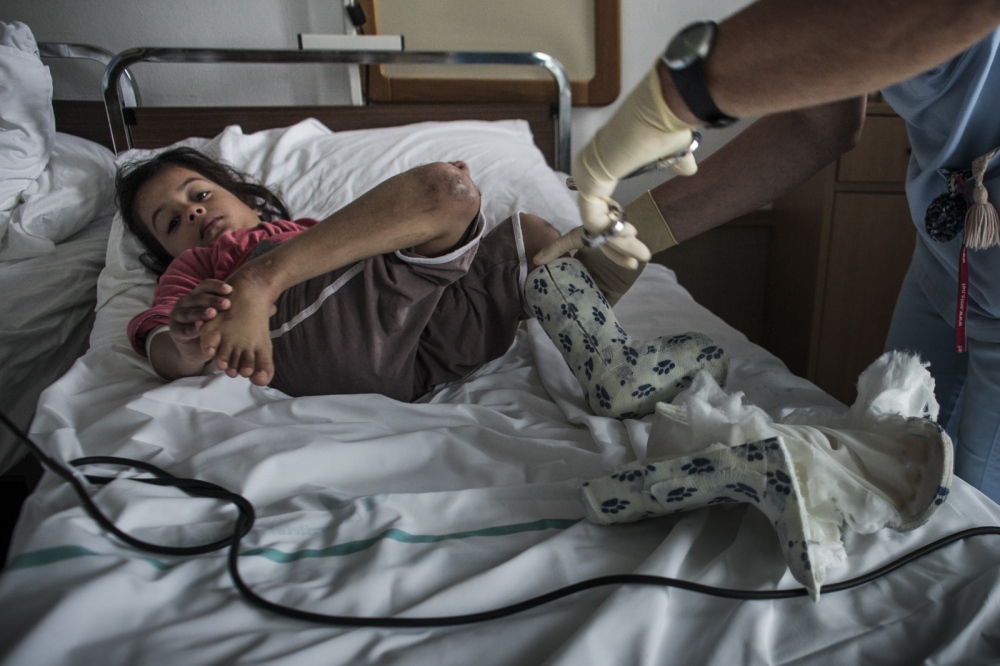 4 of 16 © 2020 Matic Zorman
Ljubljana, Slovenia - October 15, 2012 : Noor touches her feet moments after doctors removed the plaster off her legs at University Rehabilitation Center Soča in Slovenia. Her legs were severely injured and her nerve system seriously damaged.
She took part in Slovenia’s rehabilitation program for juvenile victims of war in Gaza. 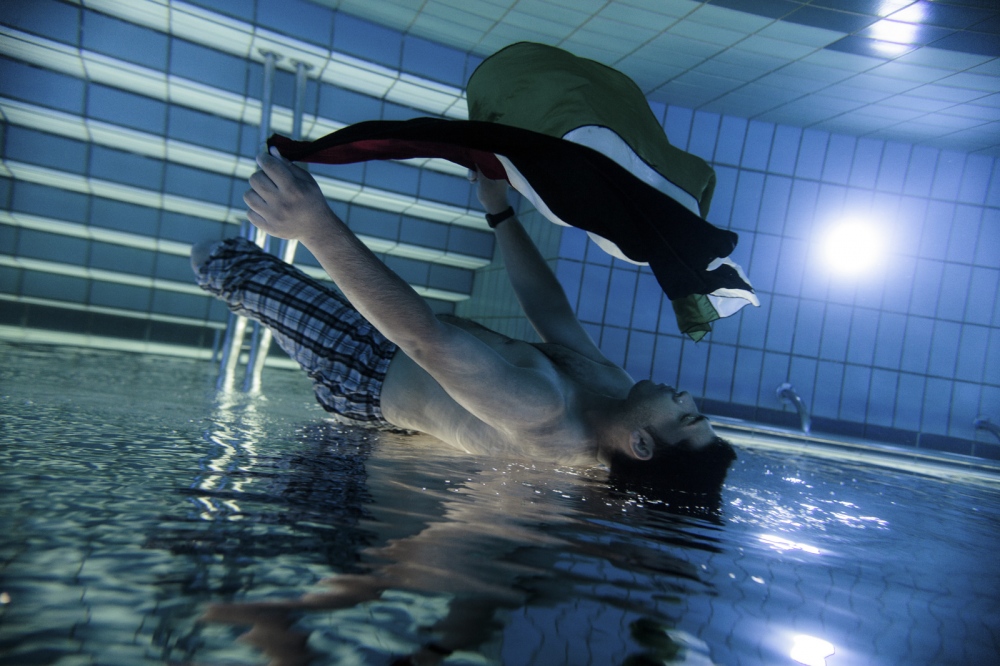 5 of 16 © 2020 Matic Zorman
Ljubljana, Slovenia - October 12, 2012: Khalil Al-Jedili uses a Palestinian flag to practice his rehabilitation course in a water pool of University Rehabilitation Center Soča in Slovenia. Khalil's legs had to be amputated after he was severely injured in the Israeli military drone attack during the last days of military operation Cast Lead in Gaza strip. In the same attack, he lost his brother. Khalil is an economics student in Gaza strip and an excellent diver despite his disability. 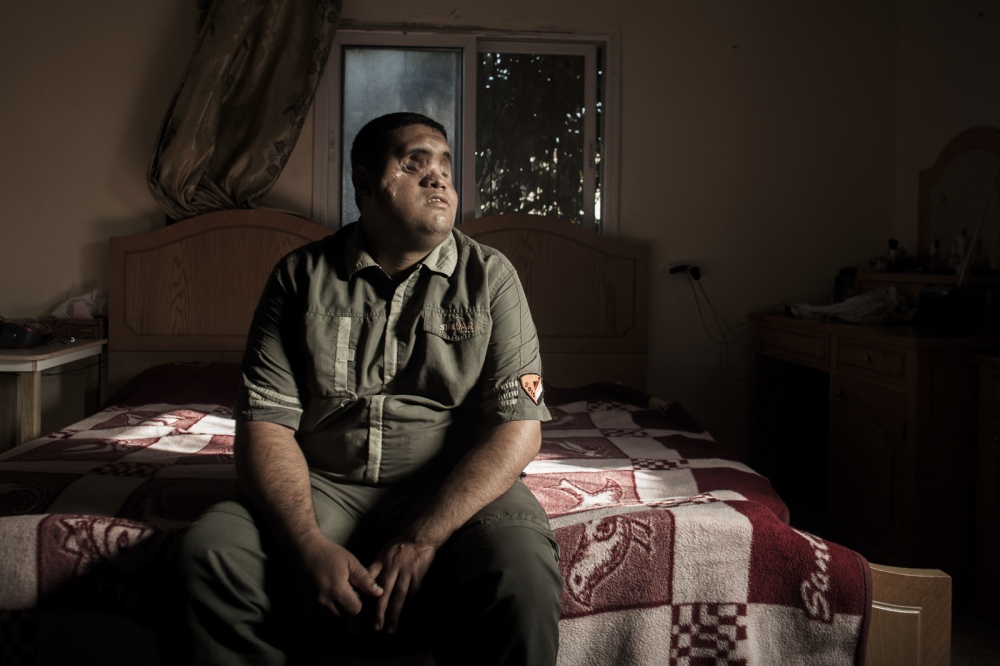 6 of 16 © 2020 Matic Zorman
Beit Lahiya, Gaza - October 5, 2012: Yahya from Beit Lahiya poses for a portrait in his bedroom. He aspires to become a mathematics teacher and to overcome the challenges posed by his blindness. His handicap was caused by severe injuries resulting from Israeli military force air strikes during the operation Cast Lead in 2009. Yahya, an orphan since age 10, he tried to reach his caretakers who took shelter at the UNRWA school as the area was targeted by an F-16 bomber. After the air strikes, Yahya woke up from a coma in an Egyptian hospital, unaware that his caretakers were killed in the bombings. 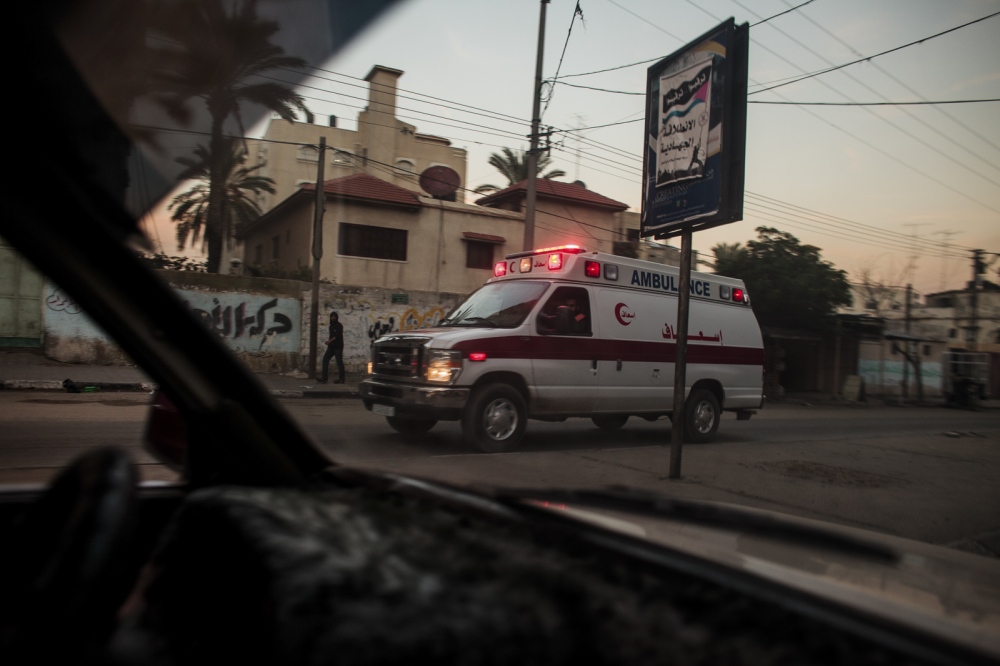 7 of 16 © 2020 Matic Zorman
Gaza City, Gaza - November 14, 2012: Palestinian ambulance rushes to the area bombed on the first day of the Israeli military operation dubbed Pillars of Cloud. The 30 air strikes by Israeli air force throughout Gaza strip resulted in the death of 8 people and injured more than 50 only on the first day of the 8-day war. 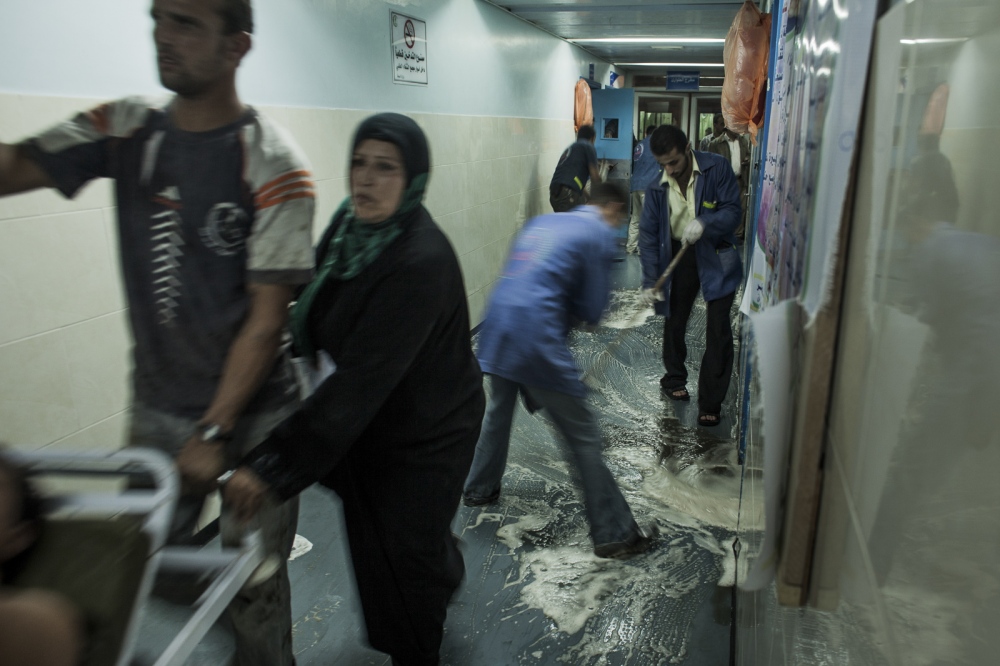 8 of 16 © 2020 Matic Zorman
Gaza City, Gaza - November 10, 2012: Janitors clean blood off the floor in the hallway of Shifa hospital in Gaza, while numerous patients are transferred from the emergency unit to the surgery rooms while air strikes in Gaza strip continue, increasing the tensions even before the Israeli military operation Pillars of Cloud officially began. 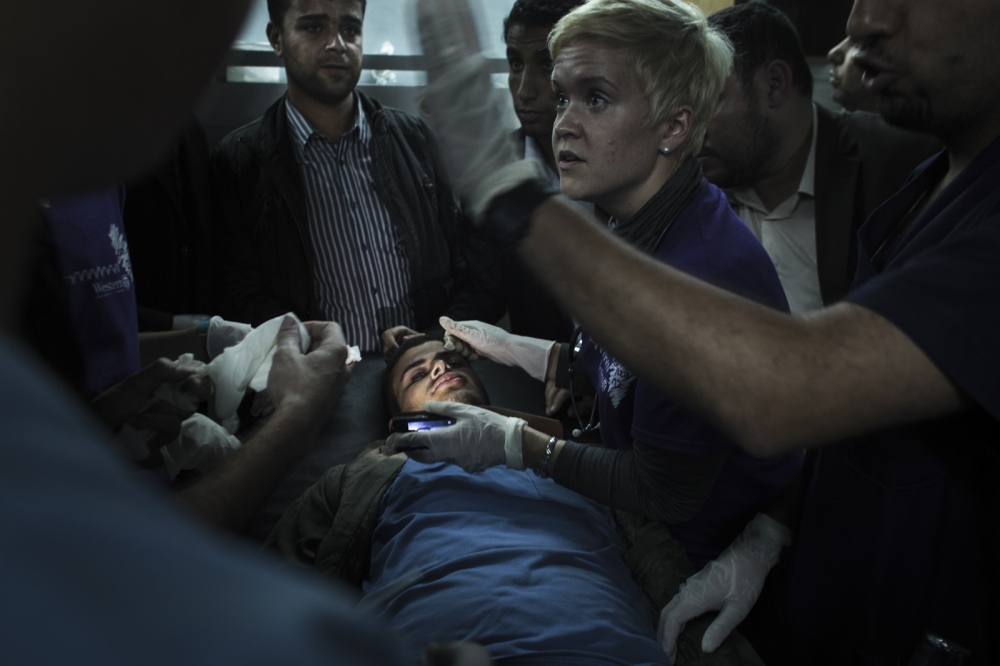 9 of 16 © 2020 Matic Zorman
Gaza City, Gaza - November 10, 2012: International medical reservists give orders to medical personnel in the emergency unit of Shifa hospital in Gaza, after examining the pupils of the injured with the aid of a cell phone light. 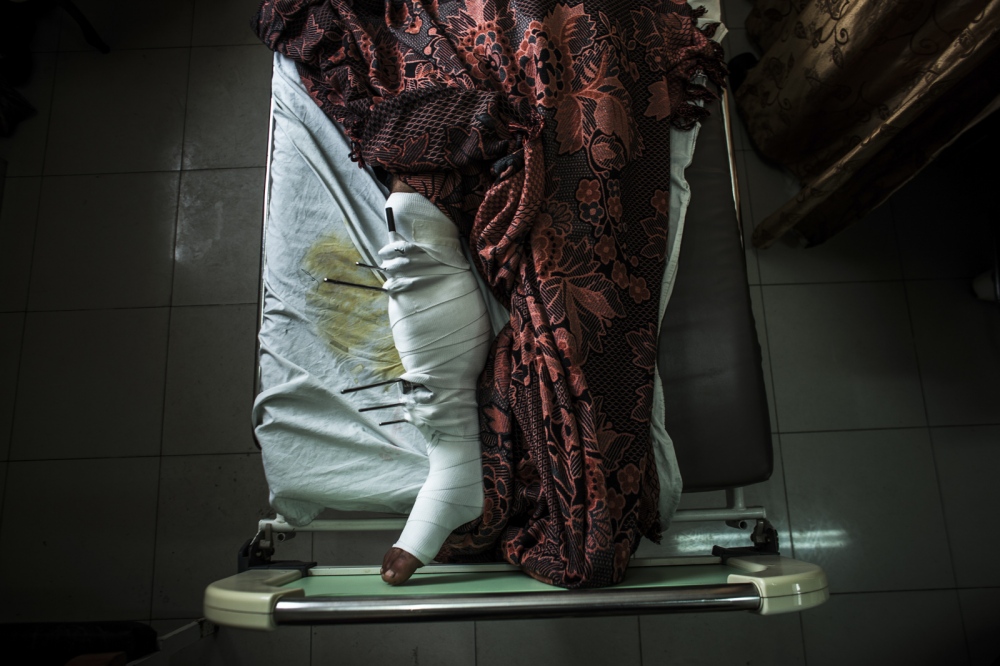 10 of 16 © 2020 Matic Zorman
Gaza City, Gaza - December 4, 2012: Leg of an injured Palestinian hospitalized in Shifa hospital in Gaza City. Between 20 and 25 percent of non-lethal injuries related to bombings and air strikes result in limb amputation. 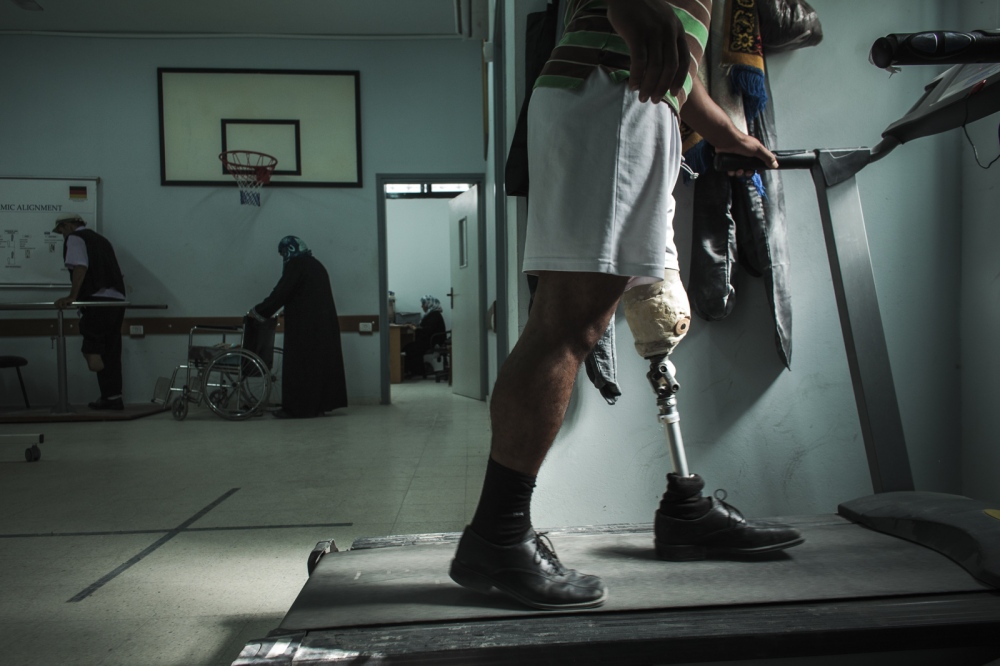 11 of 16 © 2020 Matic Zorman
Gaza City, Gaza - November 6, 2012: A patient practices walking with a prosthesis in Gaza Artificial Limbs and Polio Centre. Program of dynamic rehabilitation includes lessons of proper walk and teaches patients how to adjust prosthesis for patient's needs. 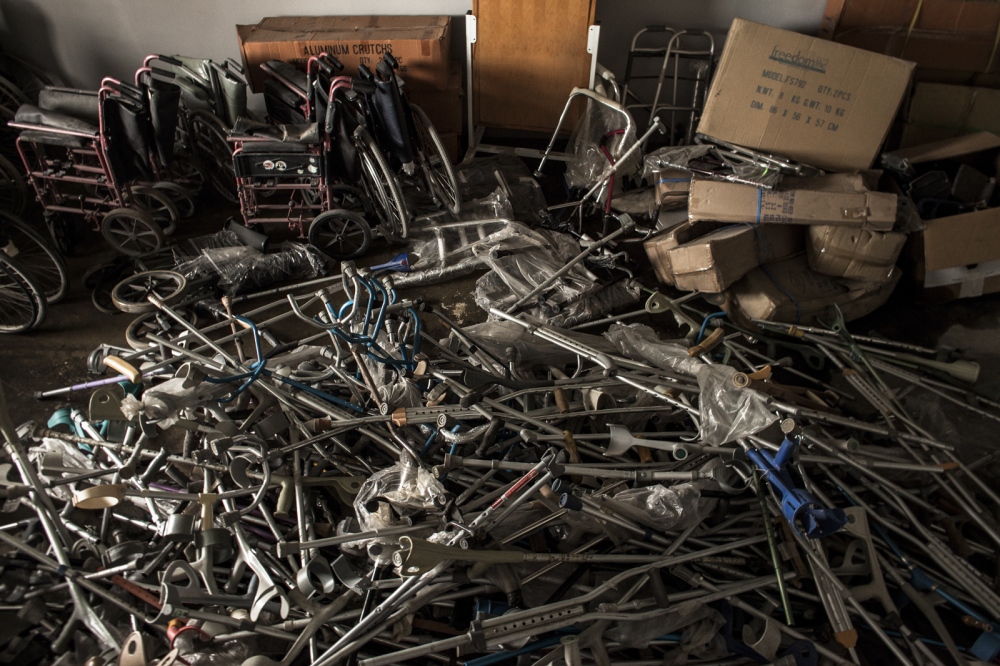 12 of 16 © 2020 Matic Zorman
Beit Lahiya, Gaza - December 4, 2012: Damaged or otherwise unsuitable crutches and wheelchairs are stored for spare parts in a warehouse of a humanitarian organization As-Salama in Gaza. As crutches used in Gaza are mostly made of materials of lesser quality, they tend to break and become inappropriate to be used for successful rehabilitation. 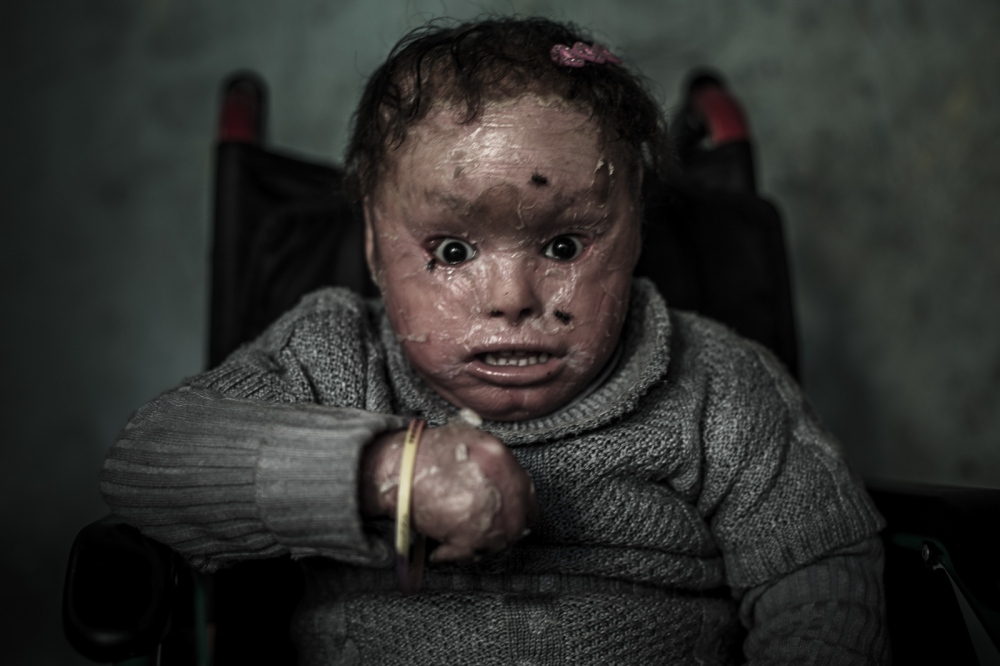 13 of 16 © 2020 Matic Zorman
Beit Hanoun, Gaza - December 12, 2012: Shahed is sitting in her wheelchair in Beit Hanoun, Gaza Strip. She suffers a genetic skin disease known as a Harlequin Ichthyosis, along with irregular growth of her leg. While pregnant, Shahed's mother was heavily exposed to the white phosphorus chemicals used by the Israeli Air Force attacks on Gaza Strip. After her birth, mother has abandoned her due to Shahed's medical condition and her father was killed during the Cast Lead military operation in Gaza. Her grandmother is only one taking care of Shahed. She runs an electrical fan next to Shahed's bed to prevent flies from feeding on her dead skin, especially during the summer season. 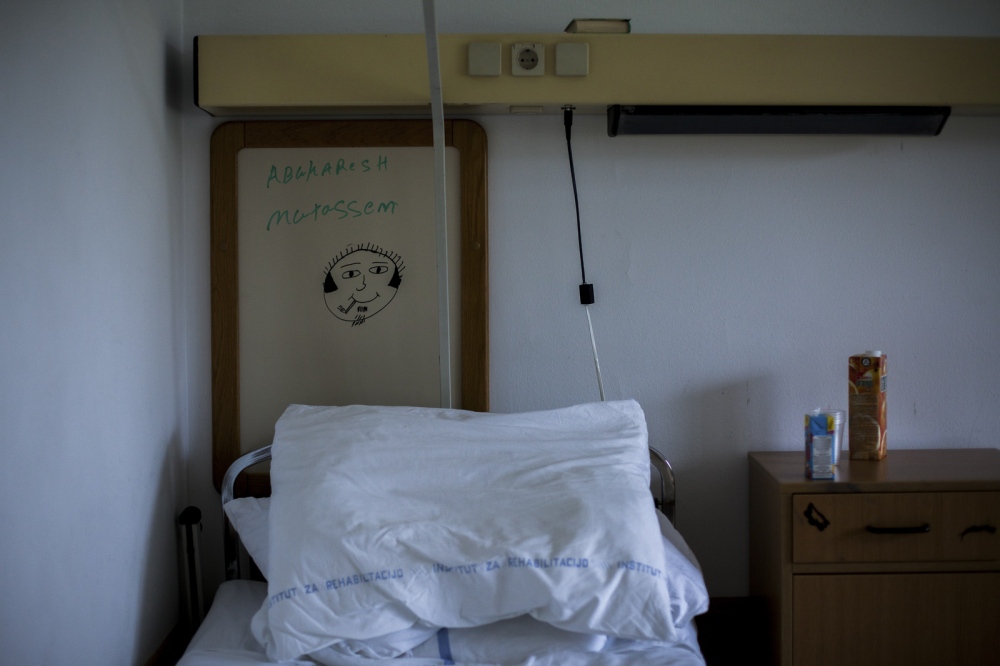 14 of 16 © 2020 Matic Zorman
Ljubljana, Slovenia - October 15, 2012: Bed in a room of Mutassem Abukaresh in University Rehabilitation Center Soča in Slovenia remains empty, as he was transferred to an infection clinic due to breathing difficulties during his last days of rehabilitation process. 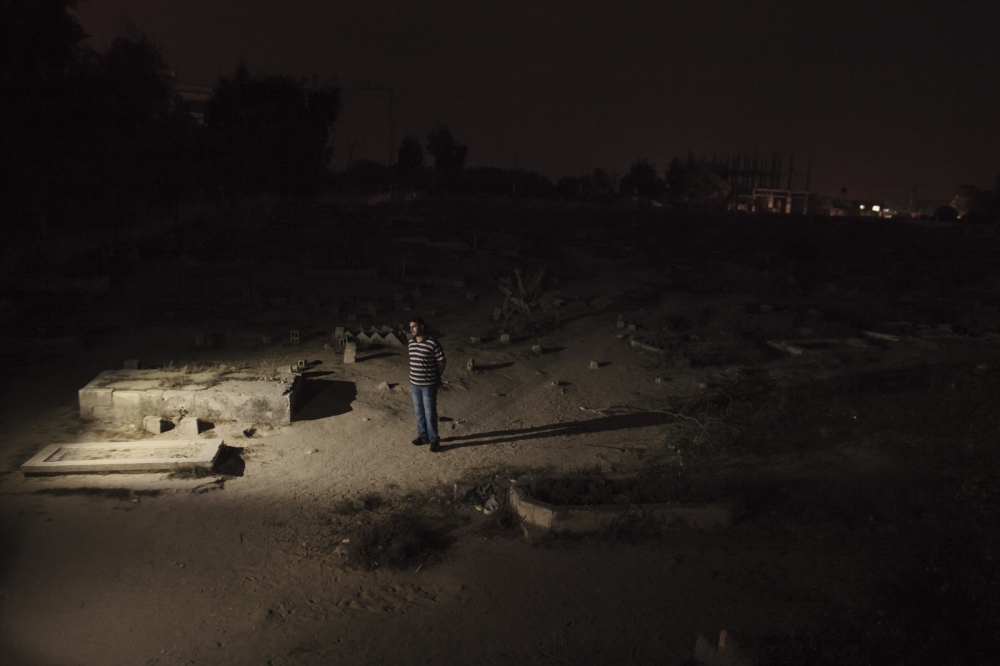 15 of 16 © 2020 Matic Zorman
Al-Burej, Gaza - November 4, 2012: Khalil Al-Jedili is standing next to a grave of his brother in Al-Burej, Gaza. As Khalil returned home from rehabilitation program in Slovenia for disabled victims of war, he visited his younger brothers grave who was killed in the same drone attack in which Khalil has lost both legs. 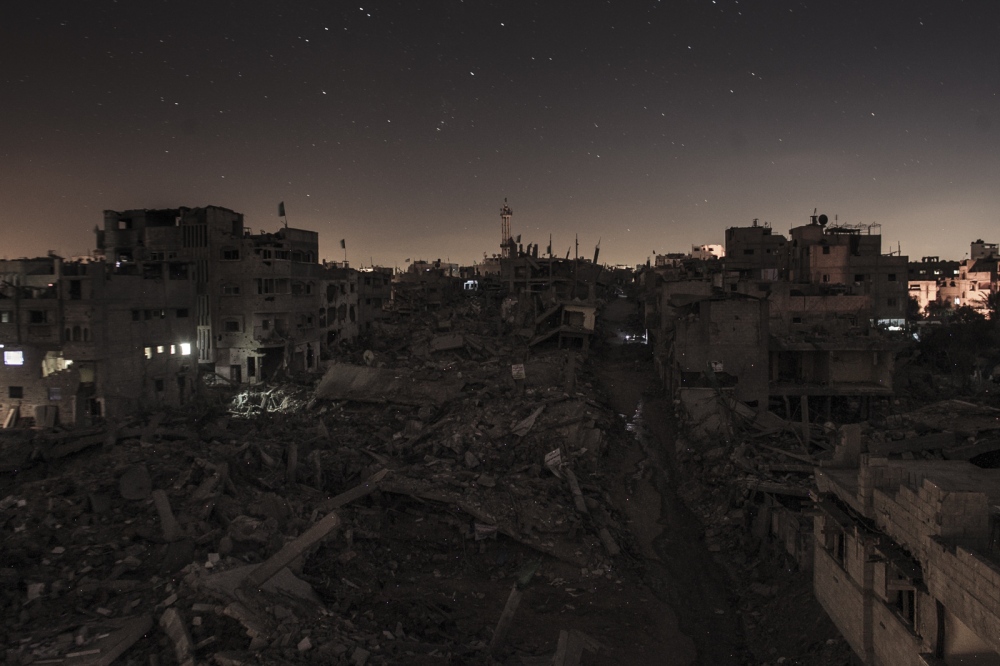 16 of 16 © 2020 Matic Zorman
Gaza, Shujai'iya - September 18, 2014: Remains of what was Shujai'iya neighbourhood east of Gaza city, after it was targeted by Israeli military forces during the war in 2014. Air strikes on Sujaia have killed 60 people, injured hundreds leaving the area devastated rendering thousands displaced.

Public Story
Faces of War
Credits: matic zorman
Updated: 01/22/16
Location: Gaza
Archived as:  rehablititation
Faces of war project documents juvenile and teenage rehabilitates during their stay in Slovenia and follows the process of their rehabilitation in their homes throughout Gaza Strip.

"This was the first time I could personally see an airplane without bombs under it's wings", explains thirteen years old Fadi Al-Arir from Gaza , when asked about his most memorable moments of the rehabilitation course he took part in at University Rehabilitation Center Soča in Slovenia.

Fadi injured his leg while playing football in his home in December 2008. Due to inadequate medical treatment and rehabilitation, Fadi’s broken leg had to be amputated due to gangrene infection. During the Israeli military operation dubbed Cast Lead in December 2008 and January 2009, hospitals in Gaza were overcrowded causing insufficient availability of medical care. Fadi's story is just one example of the hundreds of stories of juvenile victims of war from Gaza, who were included in rehabilitation program in Slovenia since 2009.

Some of them already outgrew their prosthesis, failed to maintain discipline of practice or abandoned their prosthesis. Though all of them symbolize an ode to mental strength while trying to overcome obstacles while being disabled. As participants of rehabilitation course say: " Even with our handicaps, we don't want to be pitied, but we want to be seen as producers for our community and respected".

Give me Liberty or give me Death

By Matic Zorman / Gaza — Give me Liberty or give me Death is the testament of those people, uprooted by war - refugees - who were..
Jan 17, 2016

By Matic Zorman — Reportage bears title "The Balkan Nights", as it covers the plight of refugees on their route from..
Jan 17, 2016