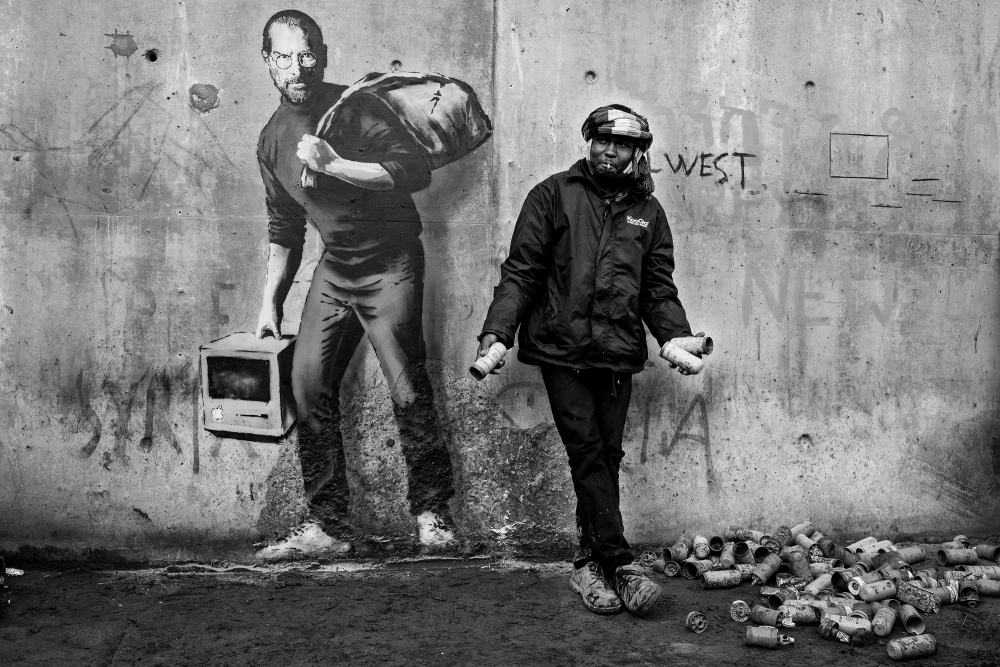 1 of 19 © 2020 Maurizio Martorana
A sudanese refugee holds exploded tear gas canisters beside Banksy's mural of Steve Jobs at the entrance to The Jungle. 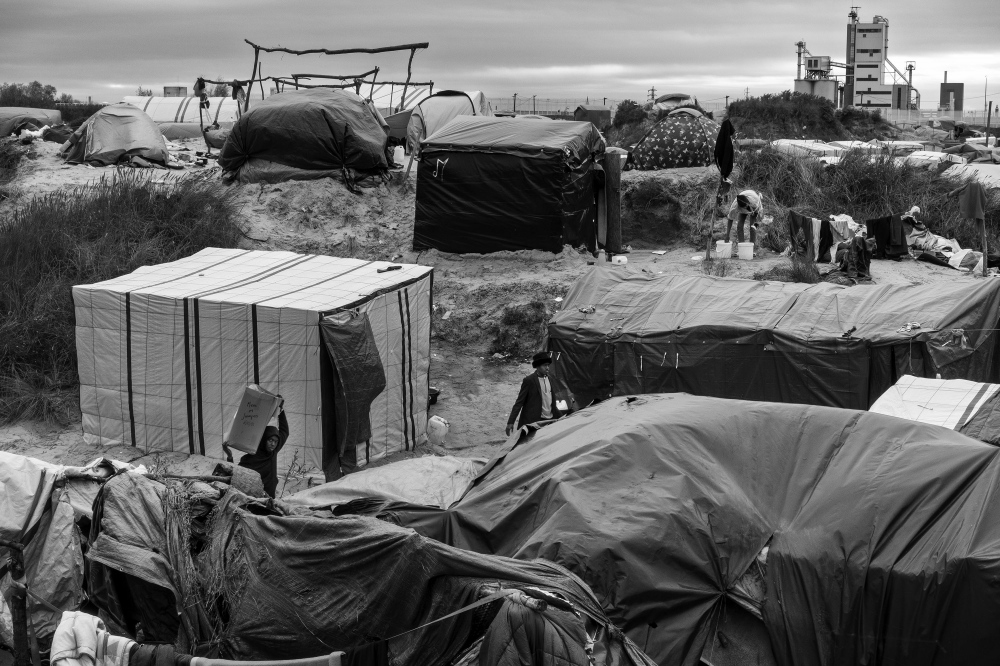 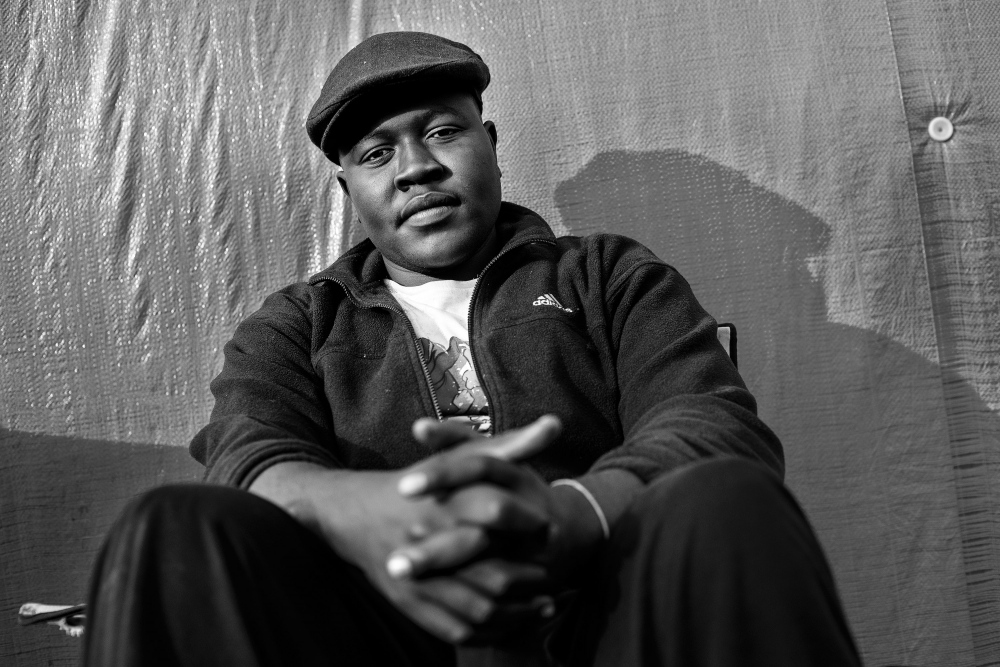 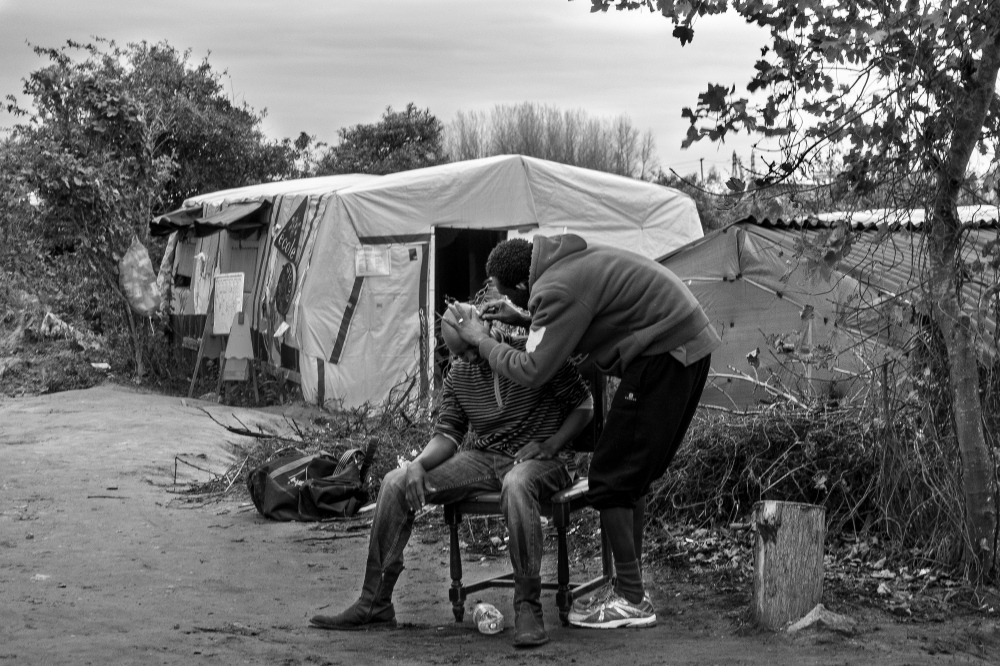 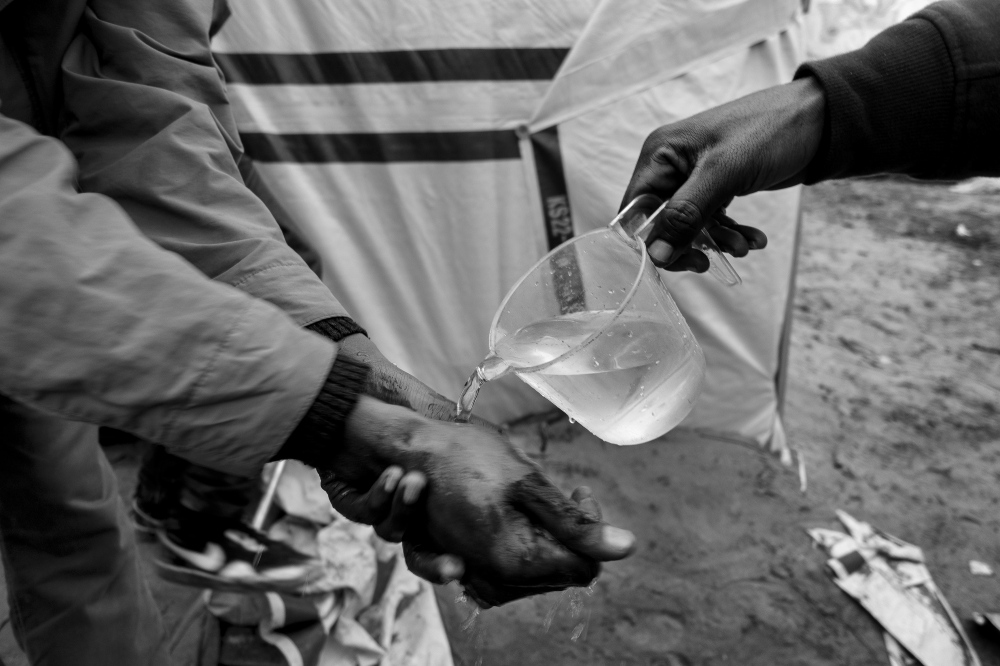 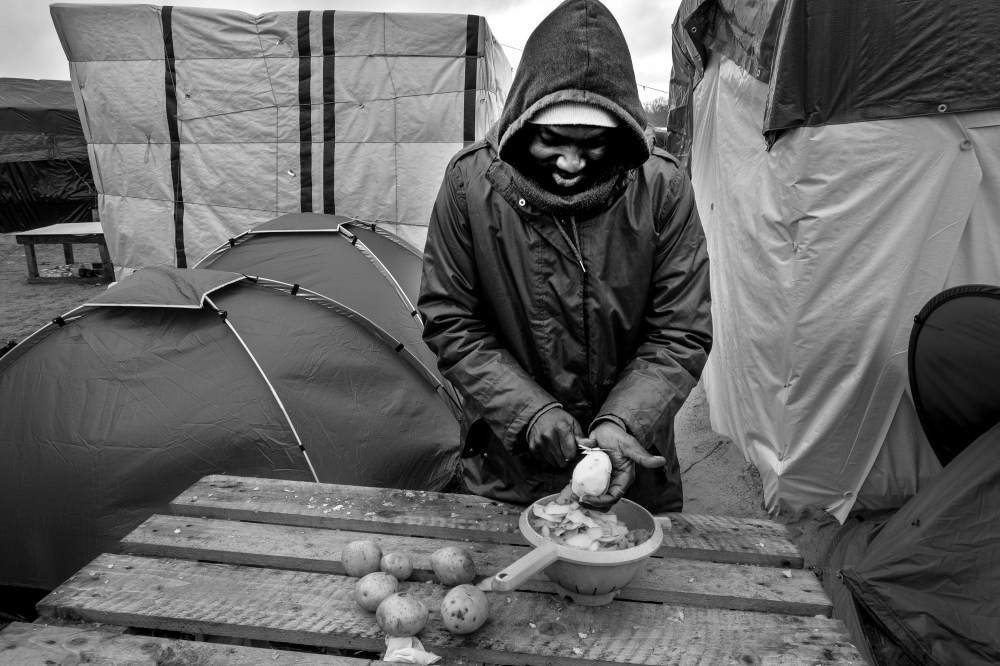 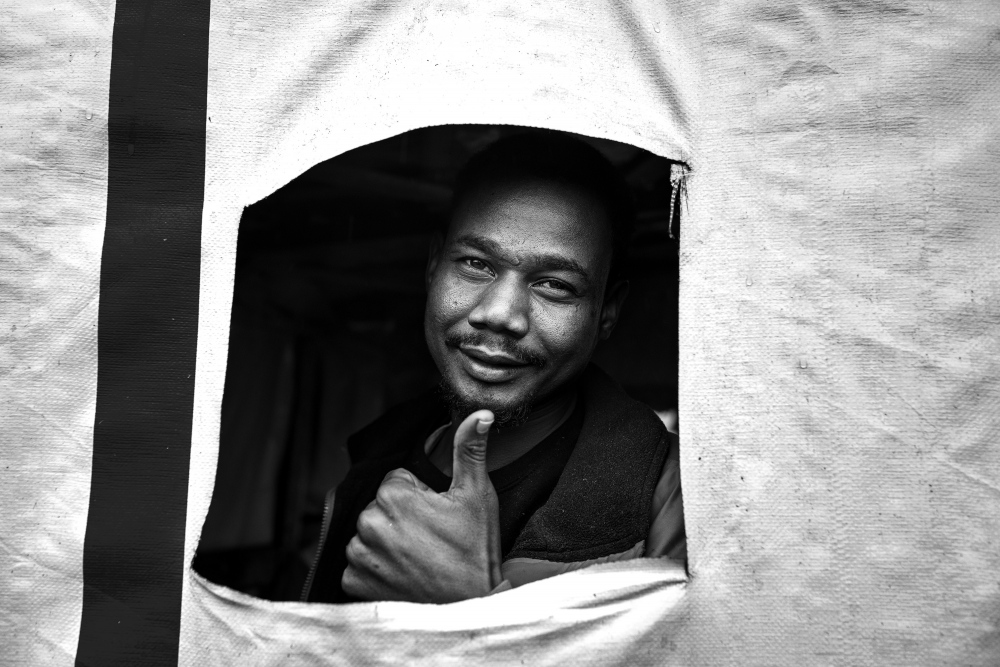 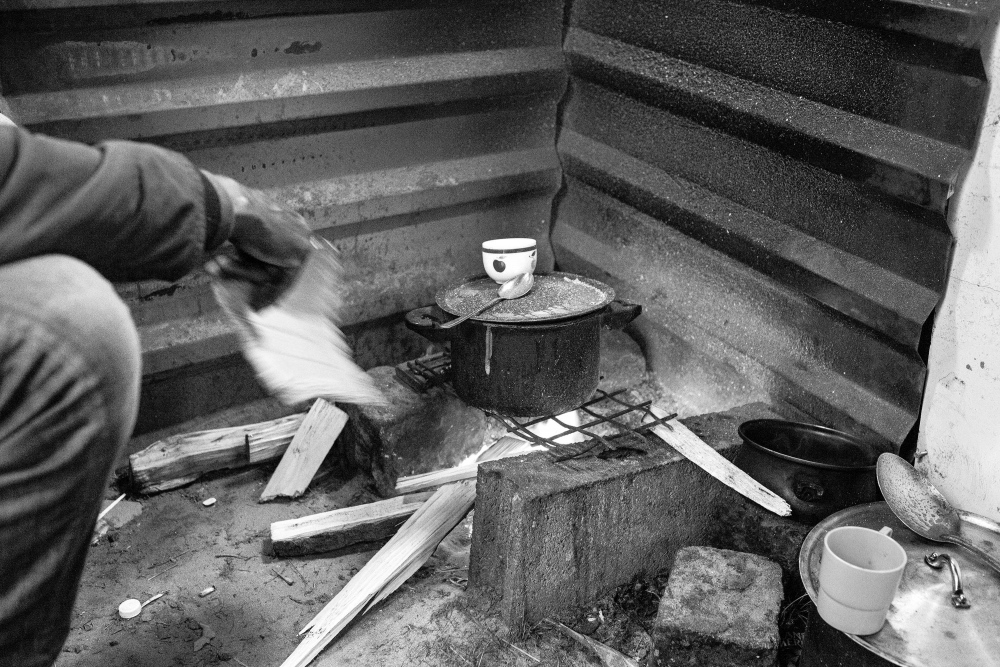 A Sudanese refugee fans the flames inside a kitchen shared by 10-15 refugees. 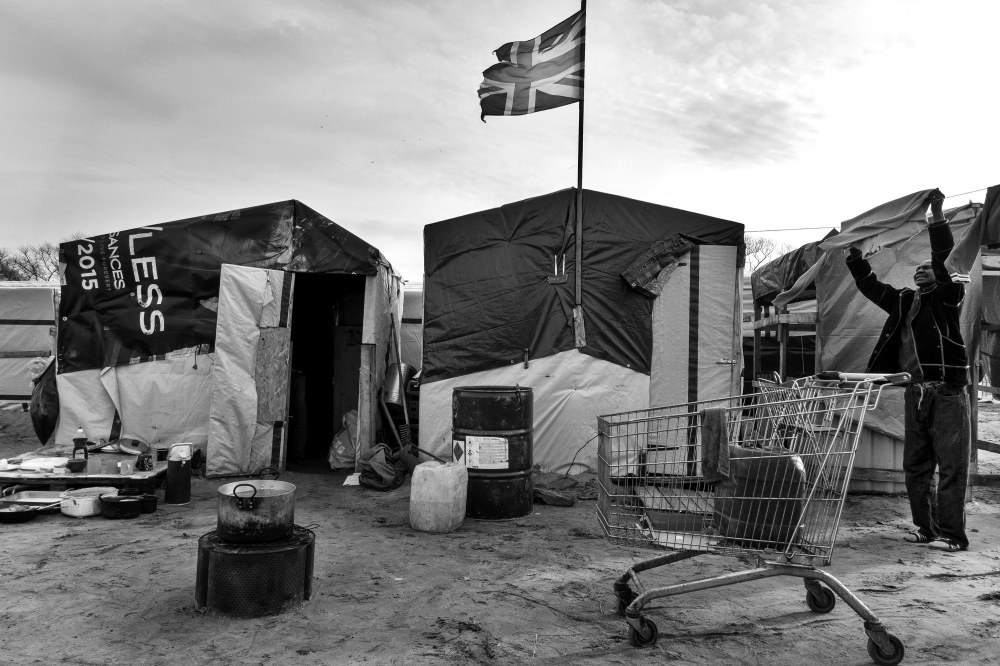 Abdul hangs out the clothes beside a UK flag. 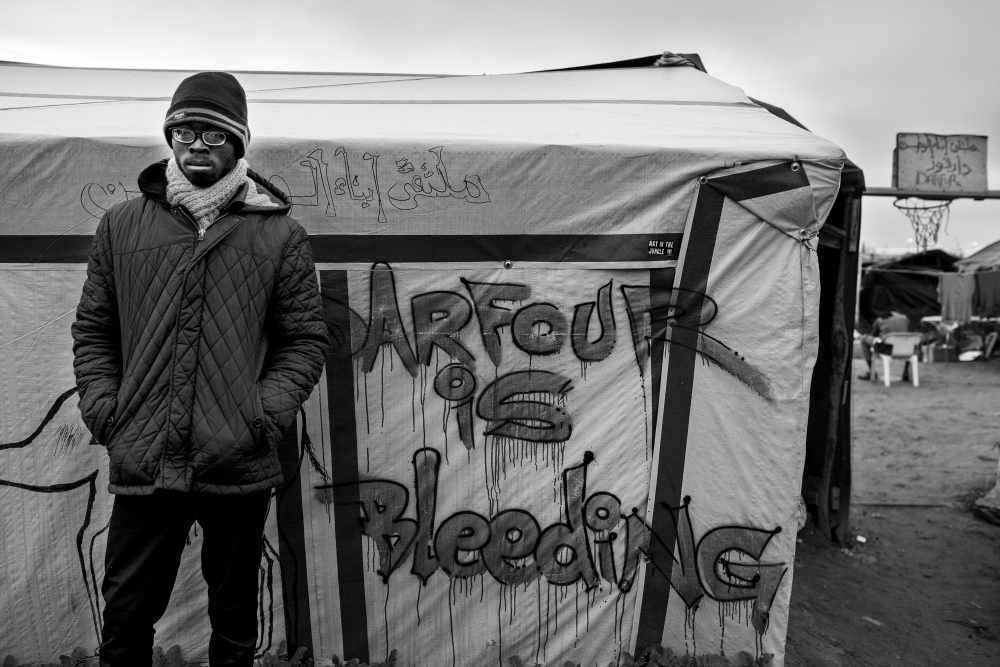 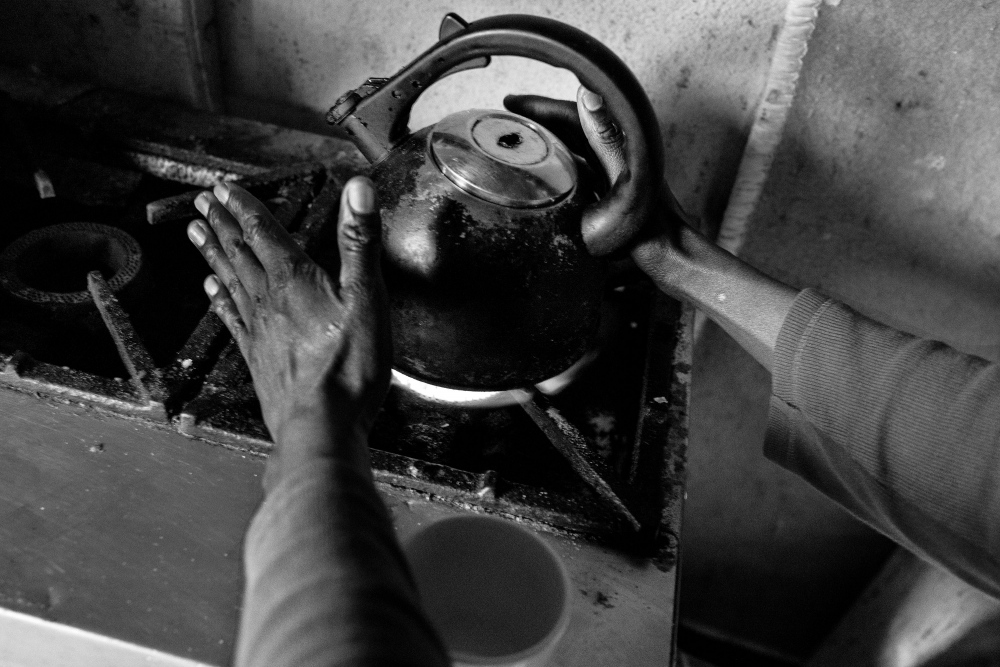 A Sudanese refugee warms his hands by the fire while he makes a coffee. 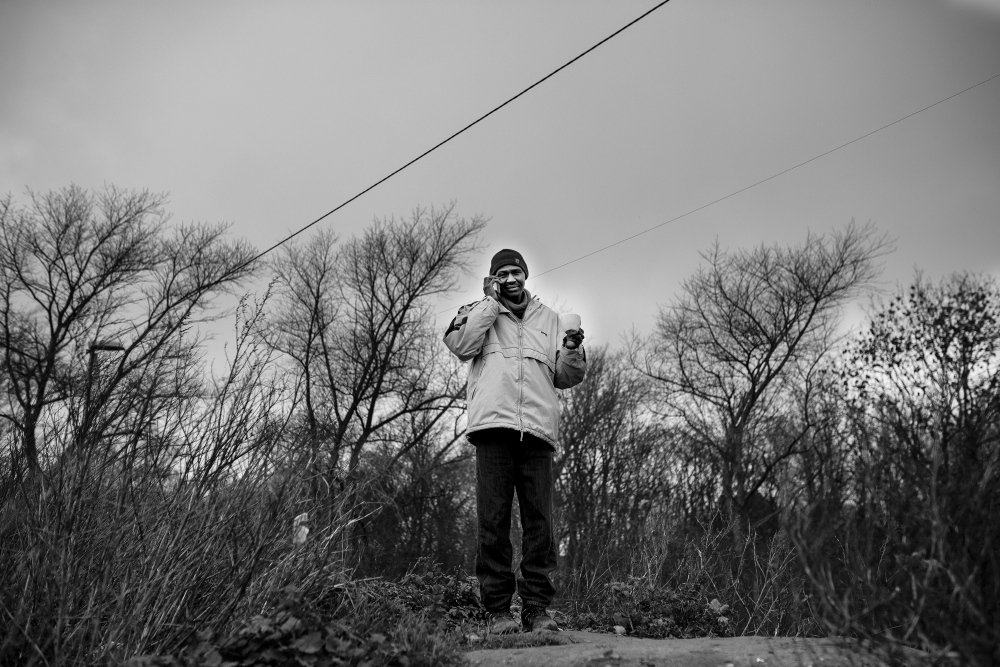 Mohamed takes a call while he drinks his coffee. 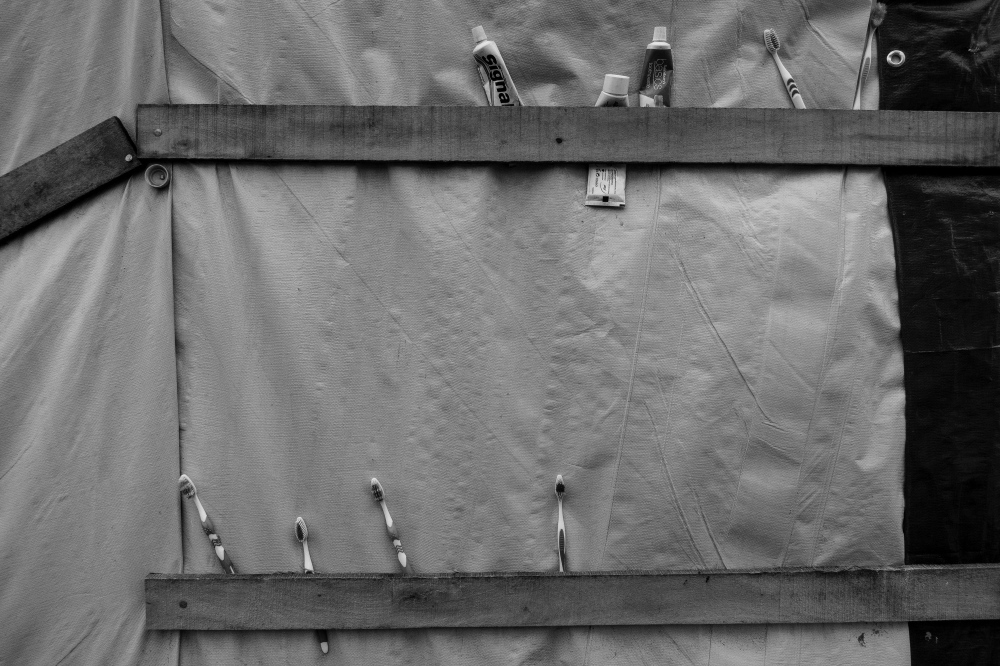 Toothbrushes and toothpastes are stored outside a shelter 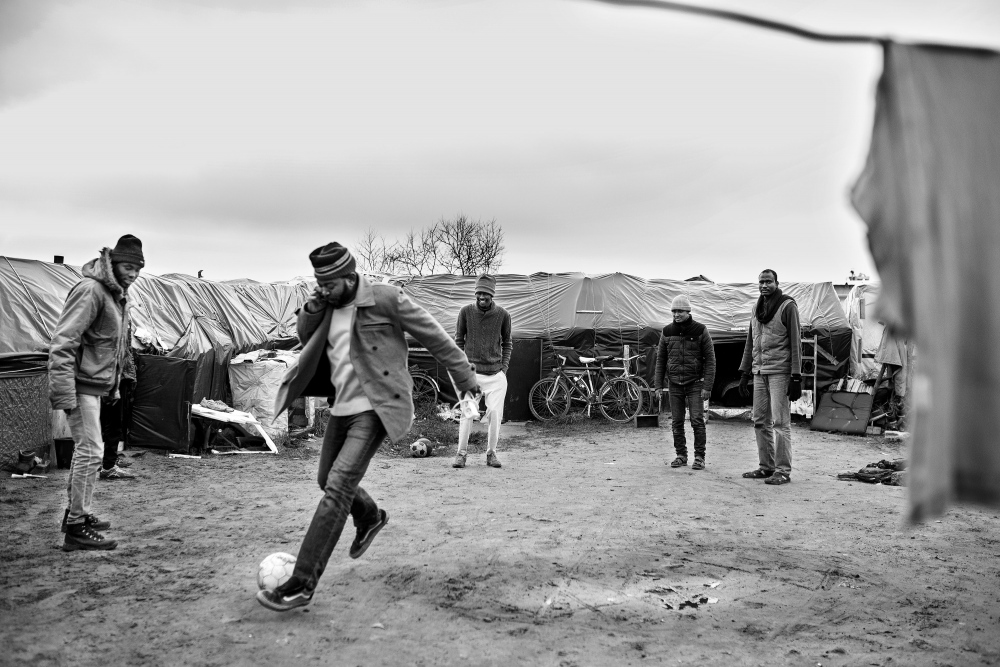 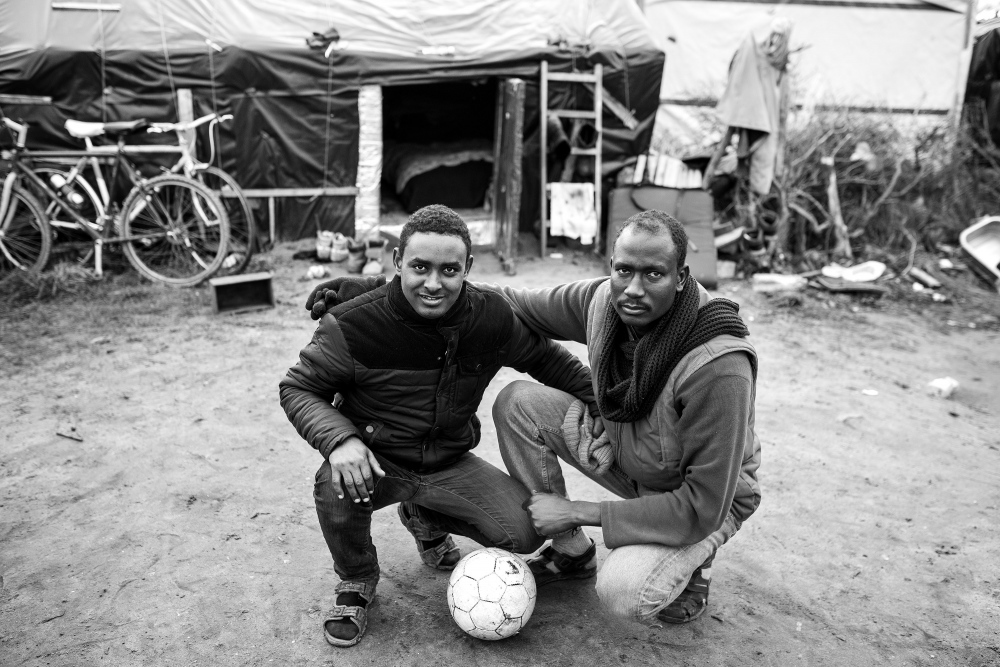 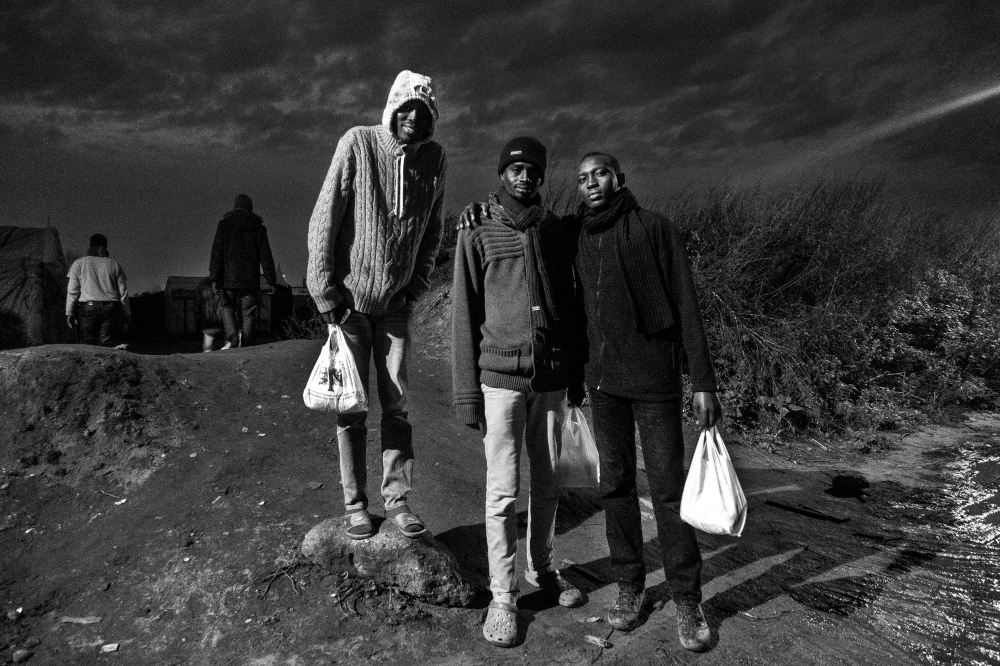 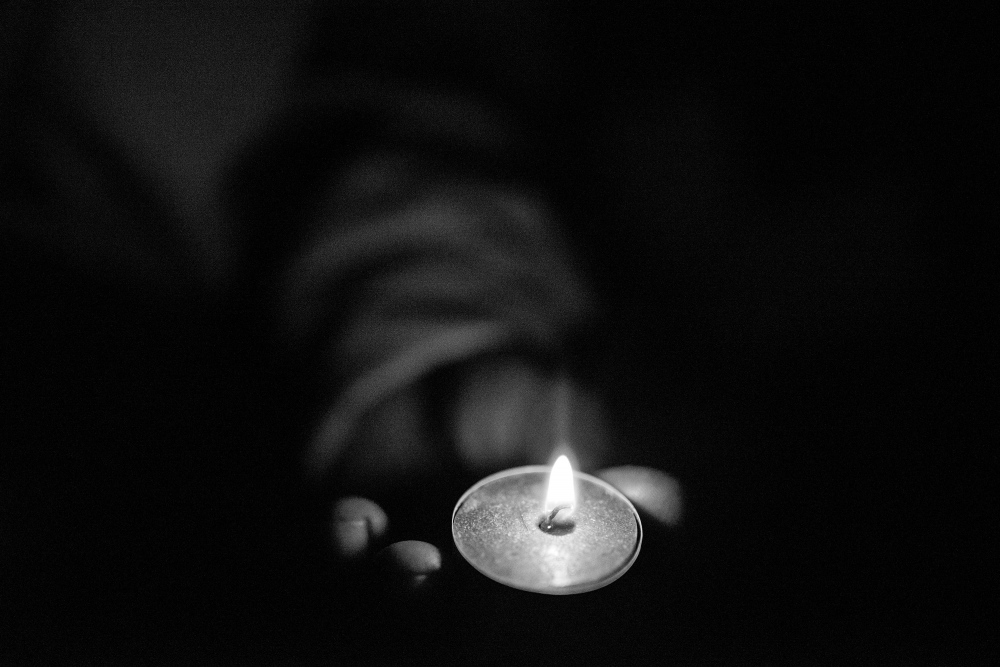 Sudanese refugee uses candles for light at night. In the past many shelters set on fire as a result of this. 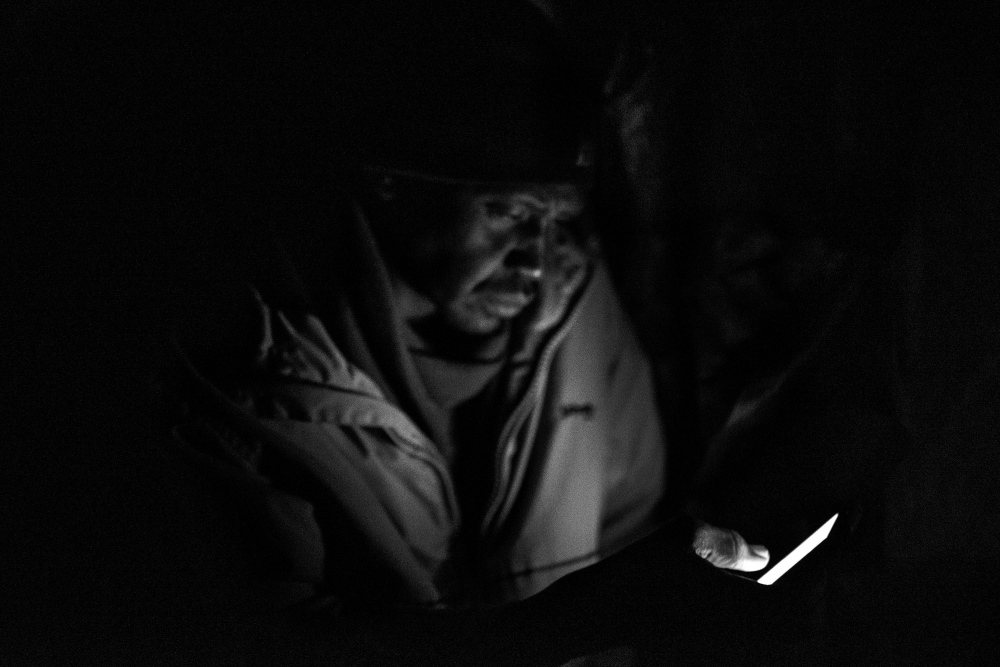 In the night Ahmad stays in his shelter and uses his smartphone to speak with relatives and friends. 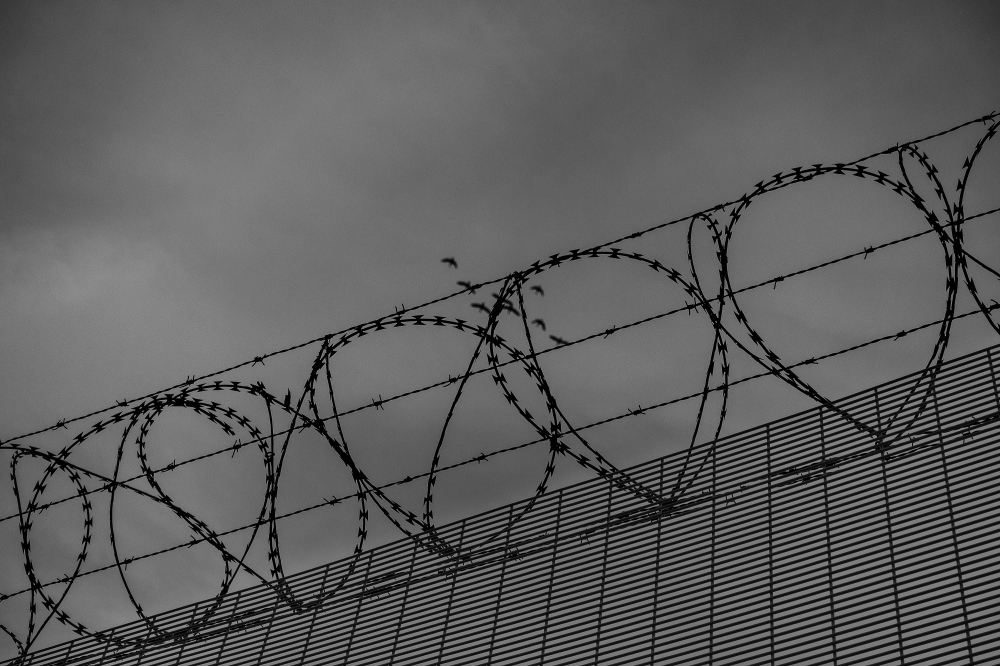 Birds fly over barbed wire at the top of fences.

With this photo project, I have attempted to show a glimpse into the life of the Zaghawa of Sudan that live in Calais’ infamous Jungle refugee camp. The Zaghawa are a transnational ethnic group, composed of various different subgroups who live mostly astride the border of Chad and Sudan, with some as even as far as Libya.

Back in the 12th Century, their belief system was originally Animist but they later converted to Islam, whilst still retaining strong links to their African heritage and identity.

In Sudan they can be found in Darfur and they represent one of the main tribes most engaged in the on-going conflict that began in February 2003. One of the main reasons for the confilct’s outbreak was the repression of Darfur’s non-Arabs population, whom the Zaghawa belong to.

Under a ruling Arab elite, the Zaghawa have been heavily persecuted by Sudanese government– using violence and torture perpetrated by the Sudanese Army and via local Janjaweed militias.

This conflict has forced hundreds thousands Zaghawa to flee to refugee camps located in Chad, Central African Republic also direction to Europe. The main way they used to reach the UE is from Libya to Italy by crossing the Mediterranean Sea. It is due to Sudan’s history as a former British colony, most them of them can speak English, have relatives in Britain and retain strong emotional ties to the country.

Unlike other nationalities present in the camp, such as Afghan, Eritrean and Syrian refugees, the Sudanese and especially the Zaghawa tend to be more sedentary. They live in shelters next to each other (most of the time from the same tribe and family), they don’t run any of the camp’s restaurants or shops, and they generally prefer to stay in their area.

The first time I decided to go to Calais to witness the situation first-hand, was after a chance meeting at The Frontline Club with a reporter and a photojournalist who were both from the UK. The chat quickly turned into the organization of a trip to Calais for the opening of the “Jules Ferry Welcome Centre”.

Since I am fluent in French, and most of refugees I met in Ventimiglia were trying to reach Calais, I offered to accompany them. We arrived on April 10th 2015, the day before the inauguration of the centre.

At that time, there were around 1500 refugees camping there as a result of the planned evictions of squats inside the city. The Jungle of Calais was at the beginning of its new phase of development. As soon  as we started walking towards it, we realised the burgeoning humanitarian catastrophe that was beginning to unfold. Rarely in my lifetime I have seen human beings living in worse conditions than around the so-called welcome centre. I spent only 4 days in Calais but it was a chance for me to build some relationships with volunteers and refugees along the way.

On June 2015, The European refugee crisis swelled through the rising number of migrant arrivals – mostly refugees – who arrived in Europe through the Mediterranean Sea and the Balkans, the majority from Africa and Middle East. France then decided to tighten border checks in a desperate attempt to contain the numbers arrived in Calais in the hope of making their way to the UK.

It was the beginning of the European refugee crisis within the mass media. During that summer I’d undertaken a photo-project on refugees stuck at the French-Italian border that can be seen here.

Few months later I enrolled in a MA in Photojournalism and Documentary Photography at the London College of Communication. It was the opportunity I was waiting for to visit Calais again. I went there at the beginning of November with a friend of mine, determined to witness what was happening in The Jungle.

Calais was making headlines everywhere and the camp looked more to a city than a refugee camp. It had changed so vastly from my first visit in April that it was now unrecognisable. Refugees were around six to eight thousand, via huge numbers of activists and volunteers present – many of them involved in building shelters and other critical facilities.

One day, as we were walking inside the Sudanese area, we crossed paths with some refugees we’d met on the previous trip who were getting a haircut.

One of them, called Mohamed, greeted us and politely invited us to stay for a coffee. We had a very interesting and long conversation about Sudan, Europe and the living conditions in The Jungle. At the end of it, we agreed to meet again the day after.

At that time my knowledge of Sudan history and Darfur conflict was very limited. I took this opportunity to expand my knowledge on a subject that had interested me since I became friends with some Sudanese refugees in Ventimiglia. It’s not all about Photography. It’s about human interactions and sharing experiences and knowledge.

The following days we spent more time together. It was then that I heard the word “Zaghawa” - the ethnic group he belonged to – for the first time.

Once I left Calais, I kept in touch with him and I said to myself that I had to come back soon. I wanted to see the changes in the camp but – above all – to meet him again and try to do something to help him. I returned to Calais at the end of November, this time with one of the two journalists who first visited it with me in April. Since then, I bonded with Mohamed even more and got increasingly worried about the horrific conditions him and all other refugees were forced to experience in The Jungle. Conditions that if it had not been for activists, volunteers and aid donations, would have been far worse.

After the second time I met Mohamed I started reading about his ethnic group and the atrocities he was fleeing from in his country. Therefore, I decided to focus on that issue and to go back alone as soon as possible in order to spend time with him and his community in The Jungle.

In the meantime, the peak of the immigration crisis attracted many journalists and photographers in Calais, turning it into a media circus like a safari park to capture misery and human tragedy. Yet again, and this time because of the attitude of many photographers present, it re-affirmed my search for a different kind of photojournalism, a sort of slow journalism focused on human interactions. Beside that, my main objective and primary concern was to help people and preserve their dignity, safety as well as my own personal integrity.

As we speak, following the decision of the French authorities, their shelters and homes are being bulldozed and their community again faces dissolution.

The Zaghawa are some of the most well-educated individuals I have ever met in The Jungle. They have always treated me with respect - as and equal and as a friend. Some are electronic engineers, teachers and historians. Many held jobs as aid workers and strategists for the UNHCR and many own Masters degrees from the University of Khartoum.

These photographs are a tiny window into the world the Zaghawa community have built for themselves in a refugee camp and a world that continues to turn its back on them.