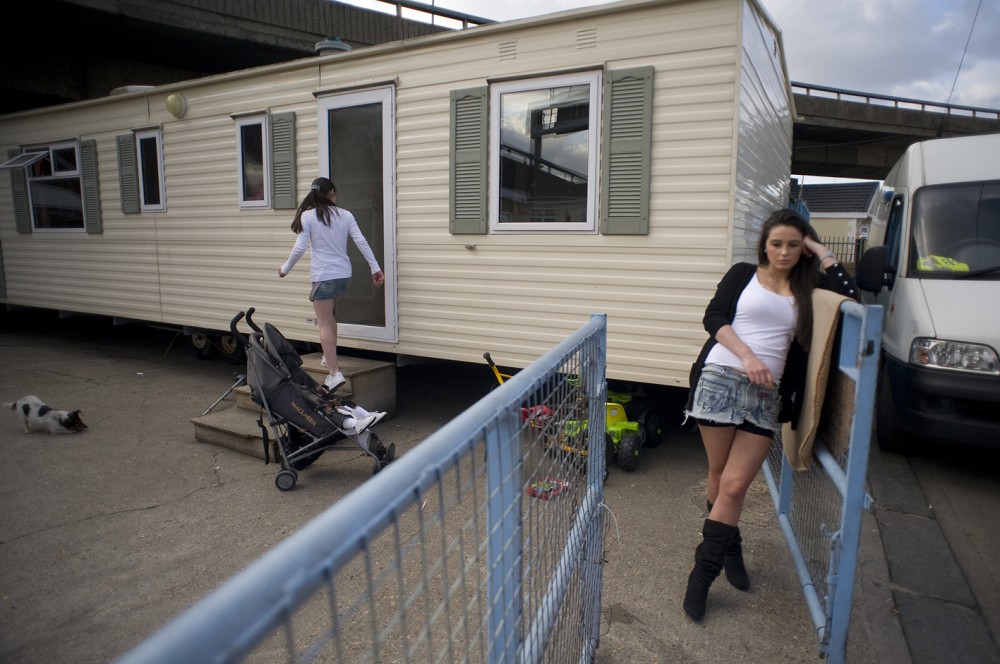 1 of 25 © 2020 Helen Twomey
Teresa Mongan, 15, outside the family trailer. The third child of seven, she plans to be married next year to start her own family. 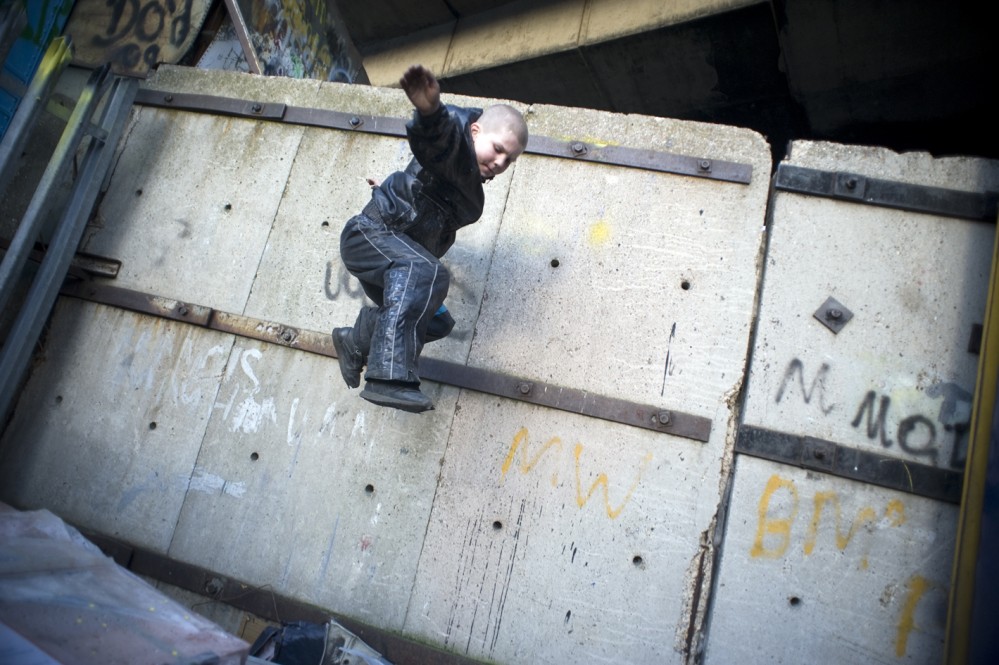 2 of 25 © 2020 Helen Twomey
Tidy O'Donnell, 8, playing along the street where he lives under the Westway in central London. 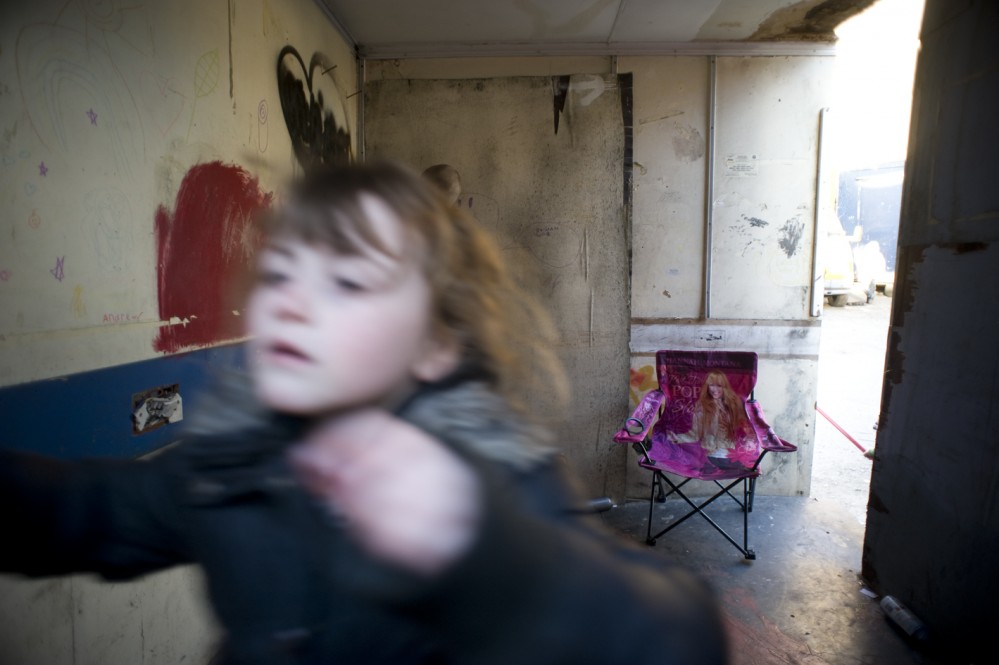 3 of 25 © 2020 Helen Twomey
Cindy O'Donnell, 8, who together with her twin sister Shirley is the youngest of seven. The two girls often look after their younger cousins who live on the site. 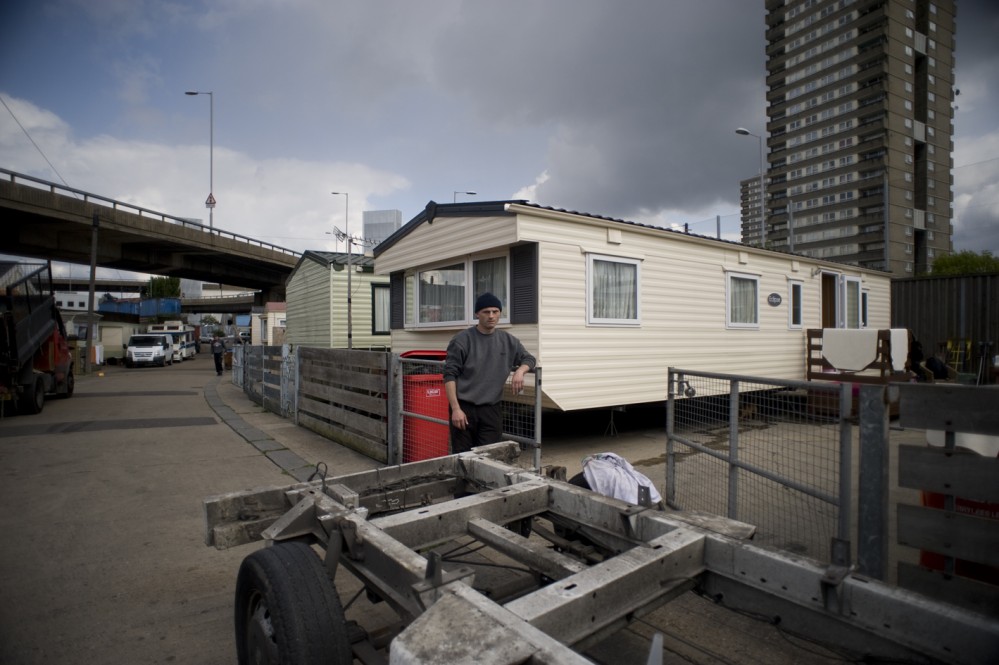 4 of 25 © 2020 Helen Twomey
Martin McDonagh outside his trailer on the Traveller site under the Westway in central London. There is little interaction between the Travellers and their neighbours beyond the street. 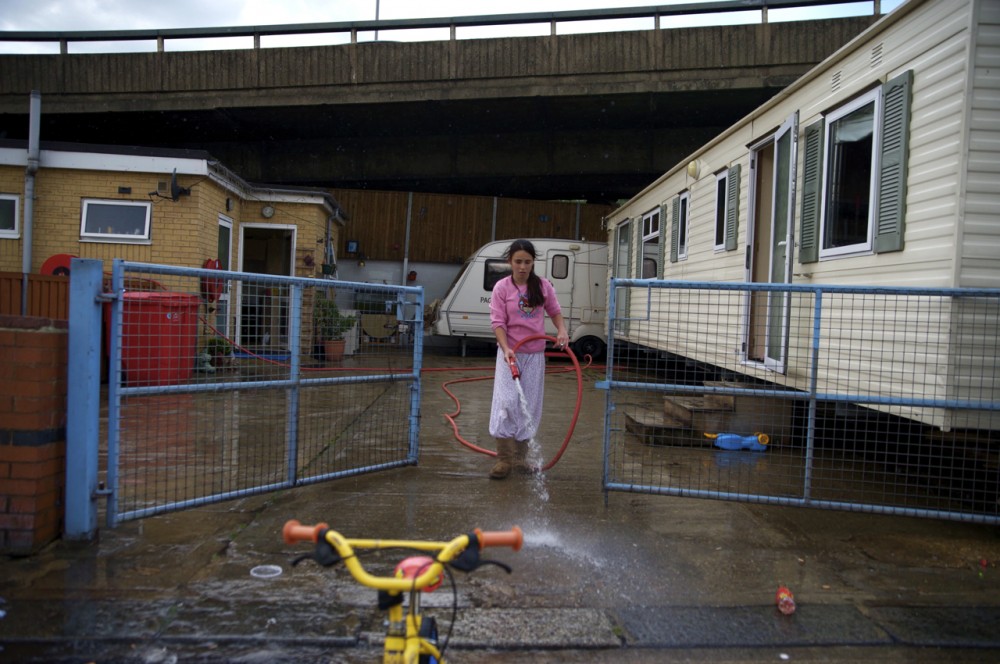 5 of 25 © 2020 Helen Twomey
Jacinta Mongan, 13. The girls have traditional roles within the community. Like many of the children, Jacinta stopped attending school after primary level. She now takes care of her younger cousins on the site, as well as other domestic duties. 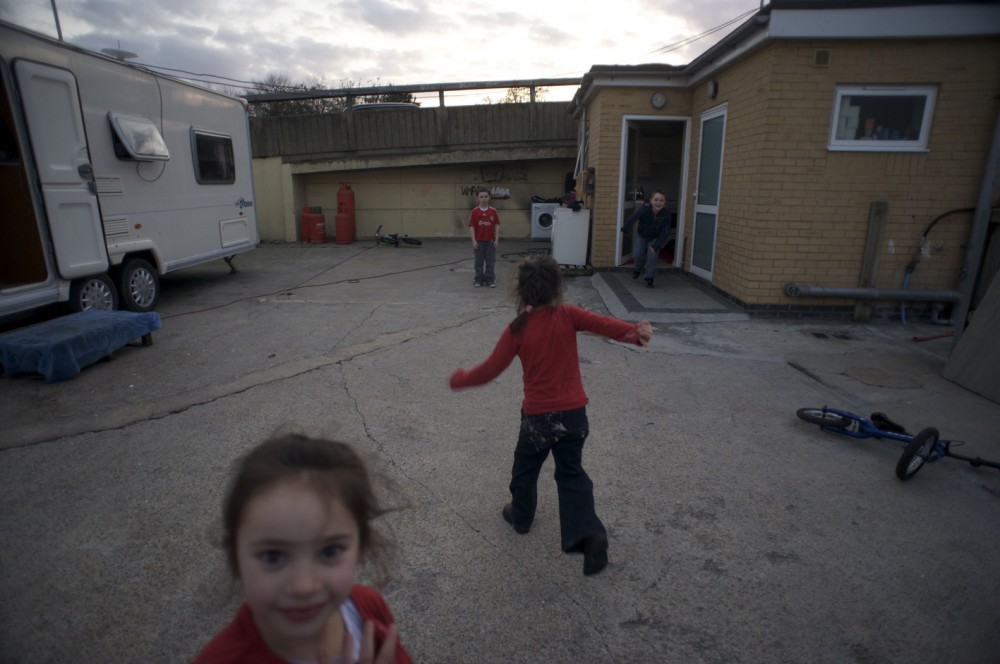 6 of 25 © 2020 Helen Twomey
Twins Megan and Caitlin, 6, playing with cousins outside their trailer. 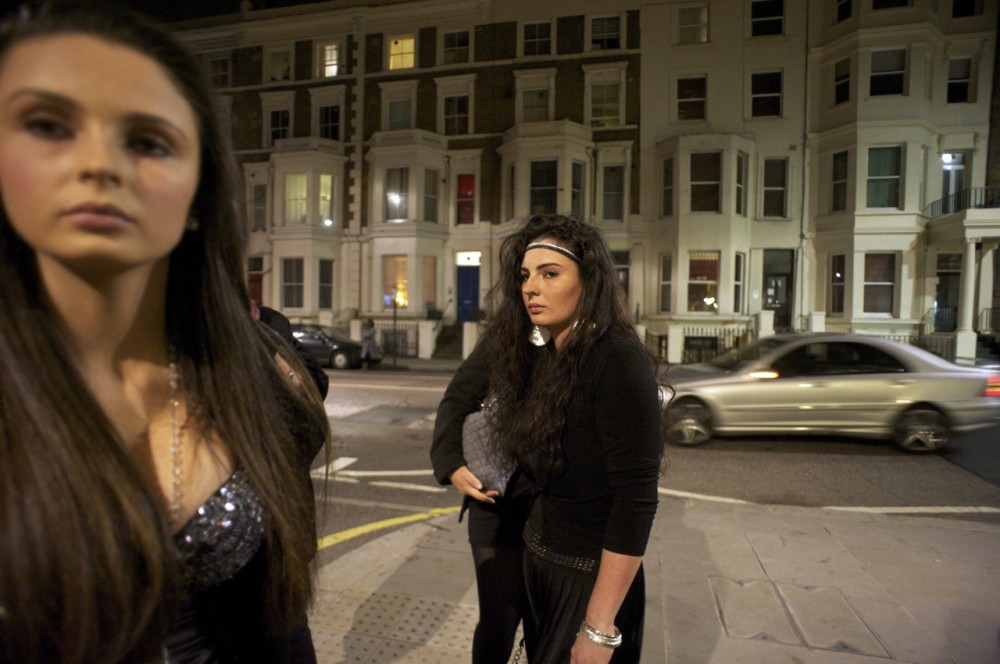 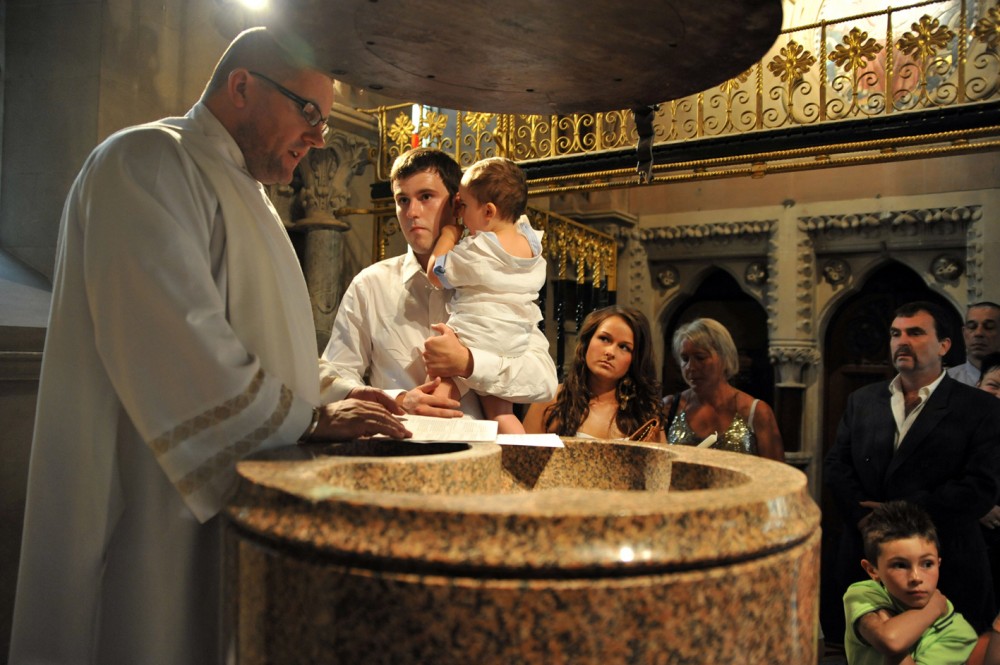 8 of 25 © 2020 Helen Twomey
Father Joe Brown conducts the christening for Jack O’Donnell. Jack’s mother Vicky is a settled girl, an unusual union as Travellers rarely marry outside their own community. Vicky's family doesn’t mix socially with the O'Donnell's beyond the church ceremony. 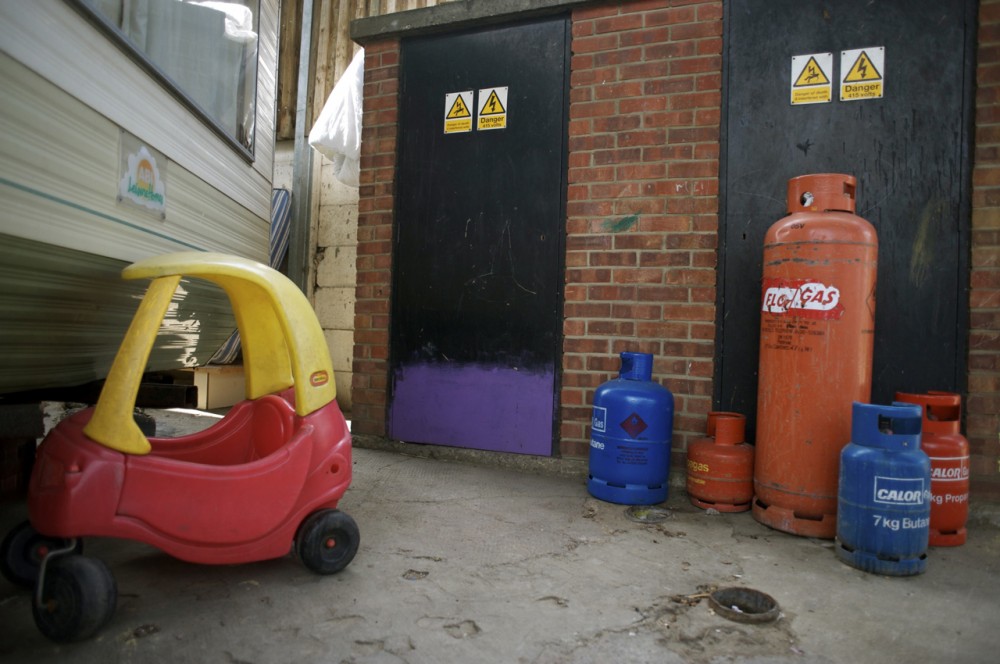 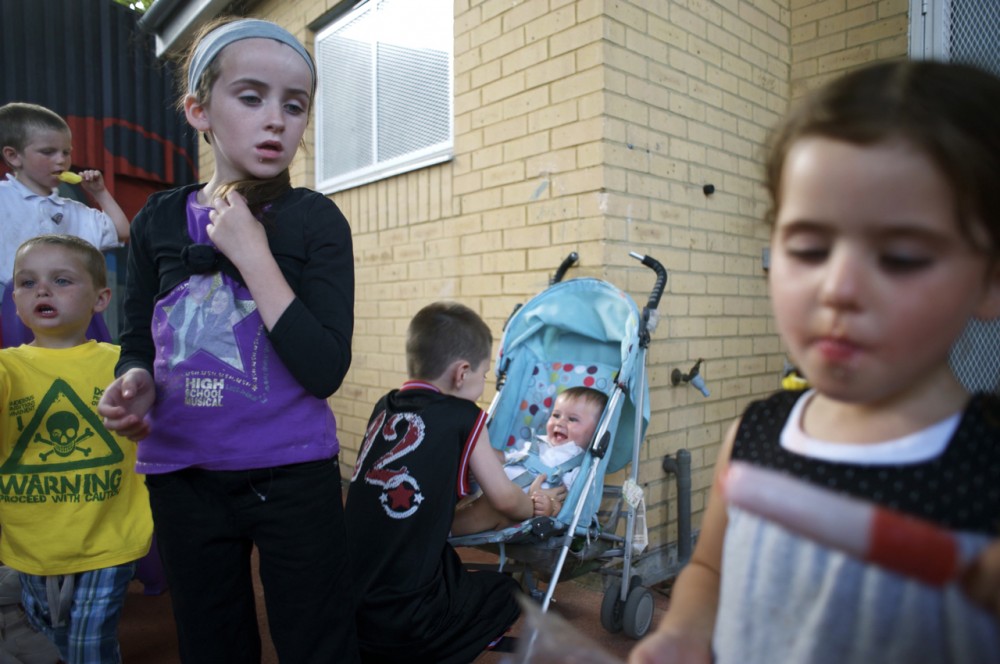 10 of 25 © 2020 Helen Twomey
Shirley O'Donnell, 8, watching over her younger cousins. Here are six children from five related families, all O'Donnell's. 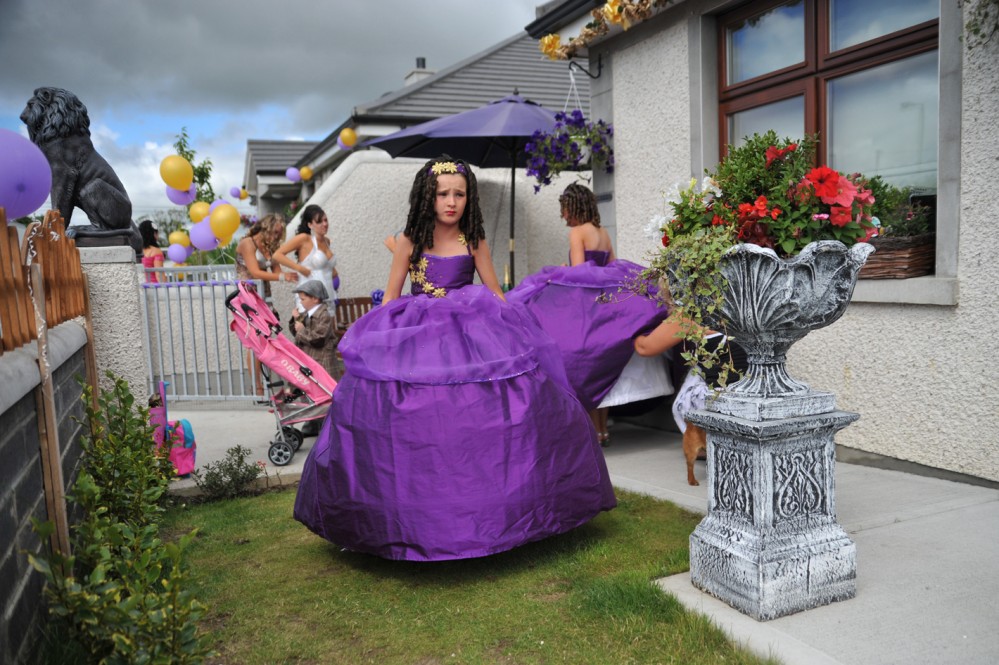 11 of 25 © 2020 Helen Twomey
Chloe Maugham, neice of the bride Margaret Maugham who married her cousin Christopher Maugham in Dublin. The Maugham family is related by marriage to the McDonagh family in London, and the tie between the two families is very strong. 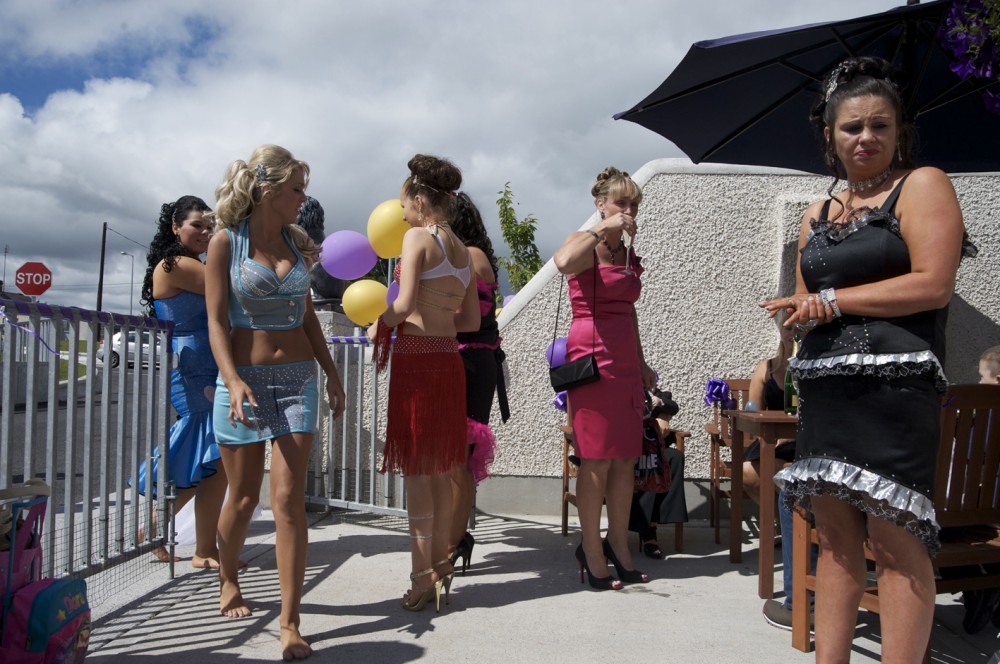 12 of 25 © 2020 Helen Twomey
Wedding guests arrive in Dublin for the Maugham family wedding. 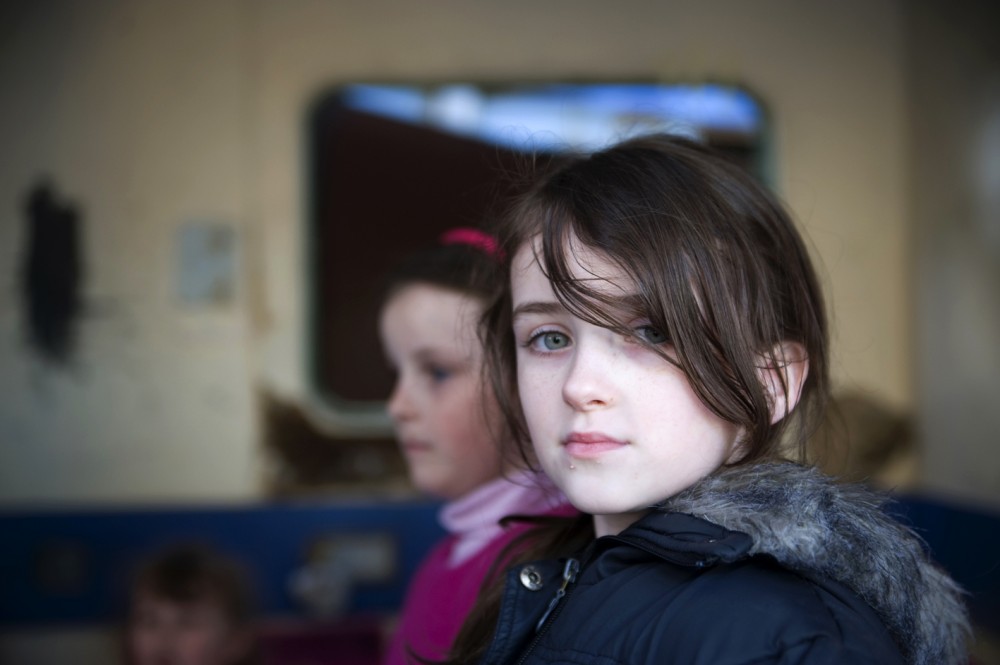 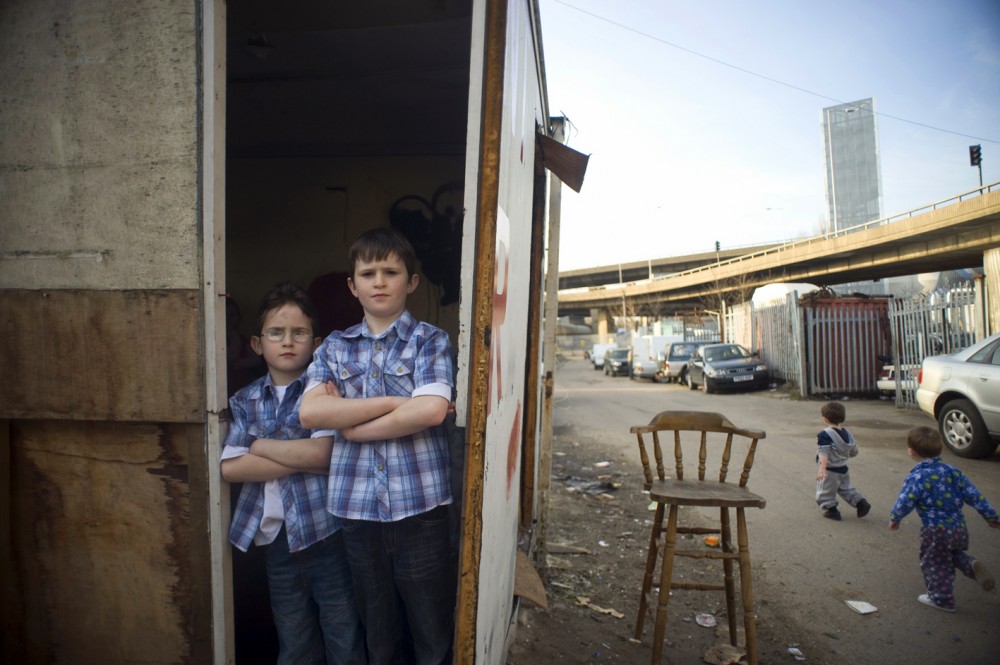 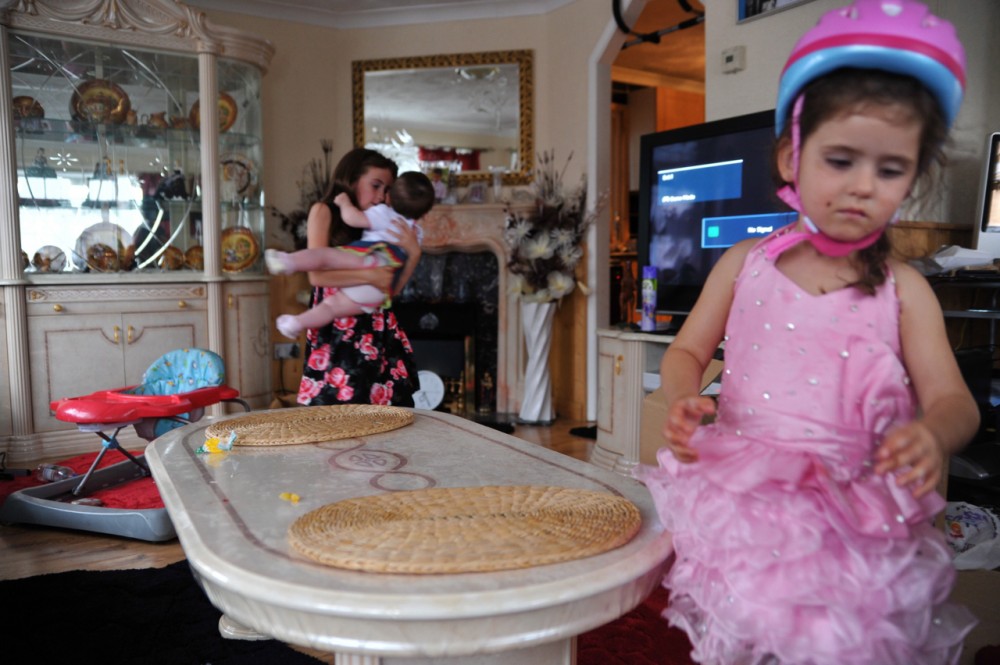 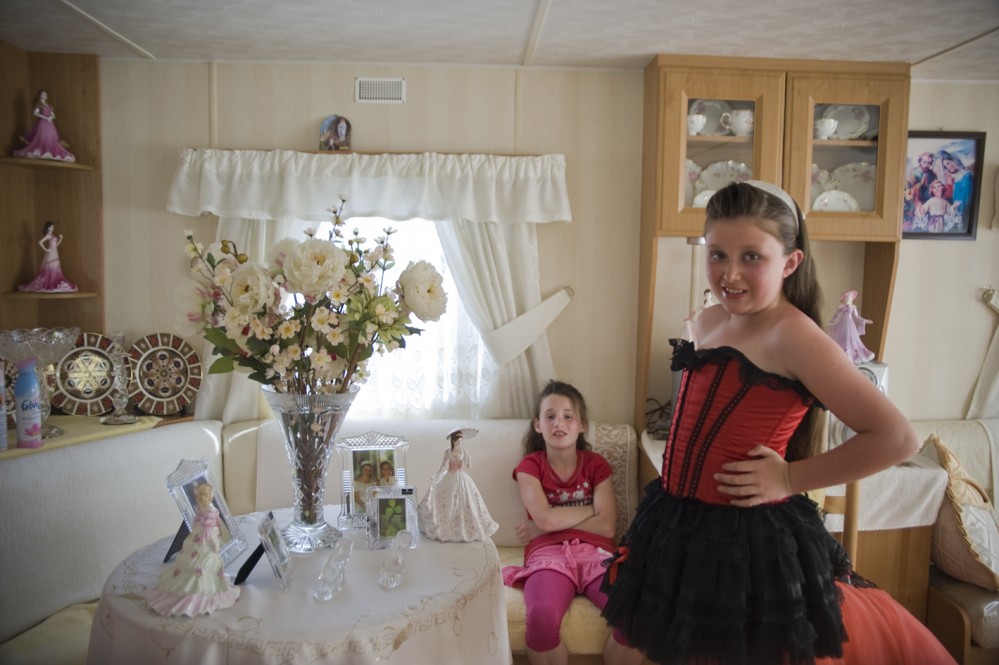 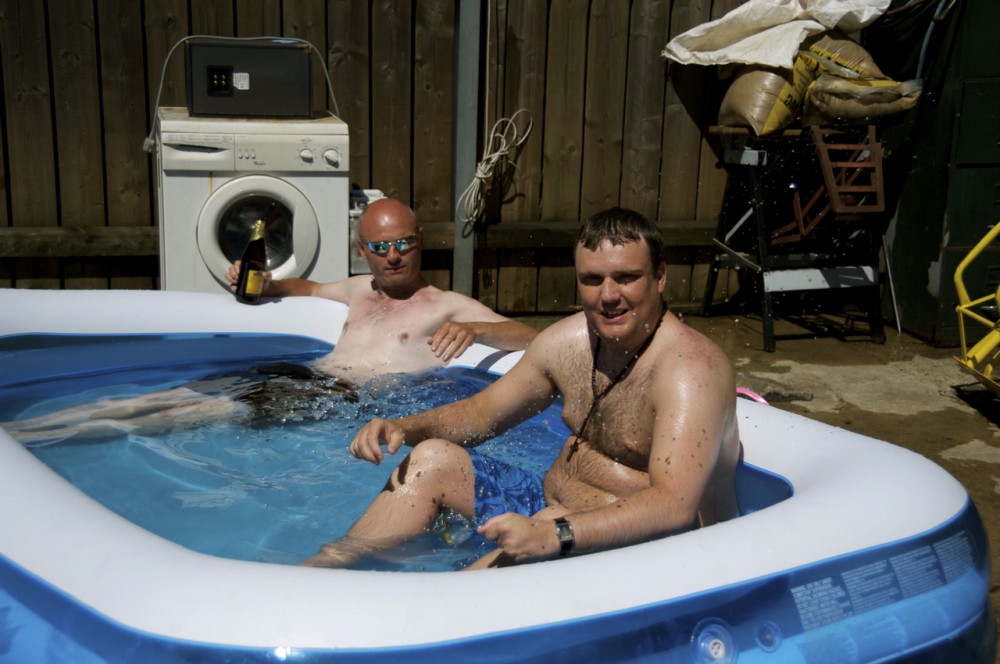 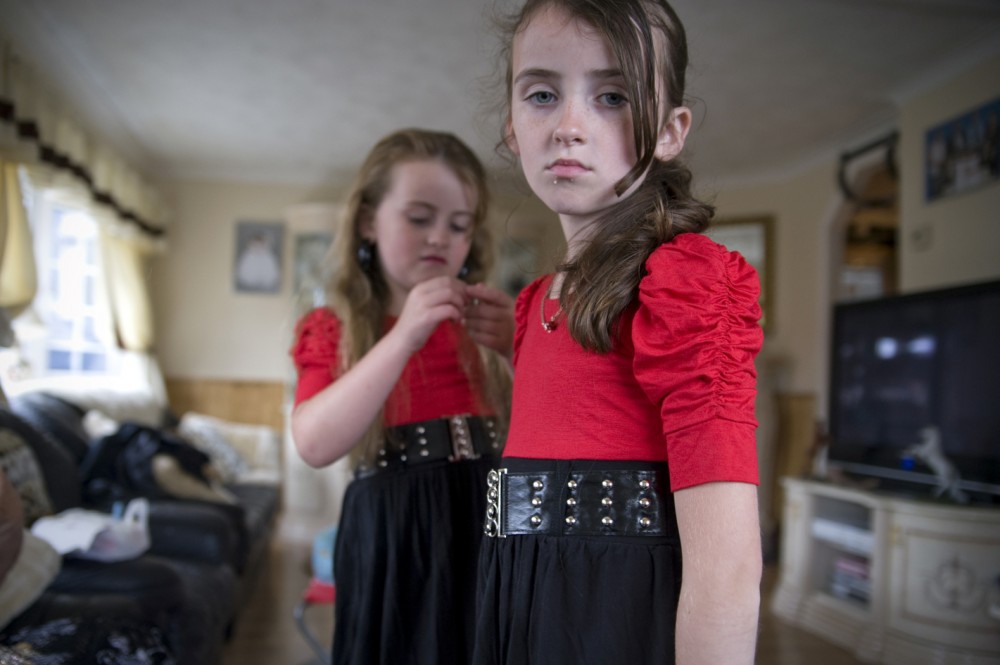 18 of 25 © 2020 Helen Twomey
Twins, Shirley and Cindy O'Donnell prepare for their sister's confirmation. 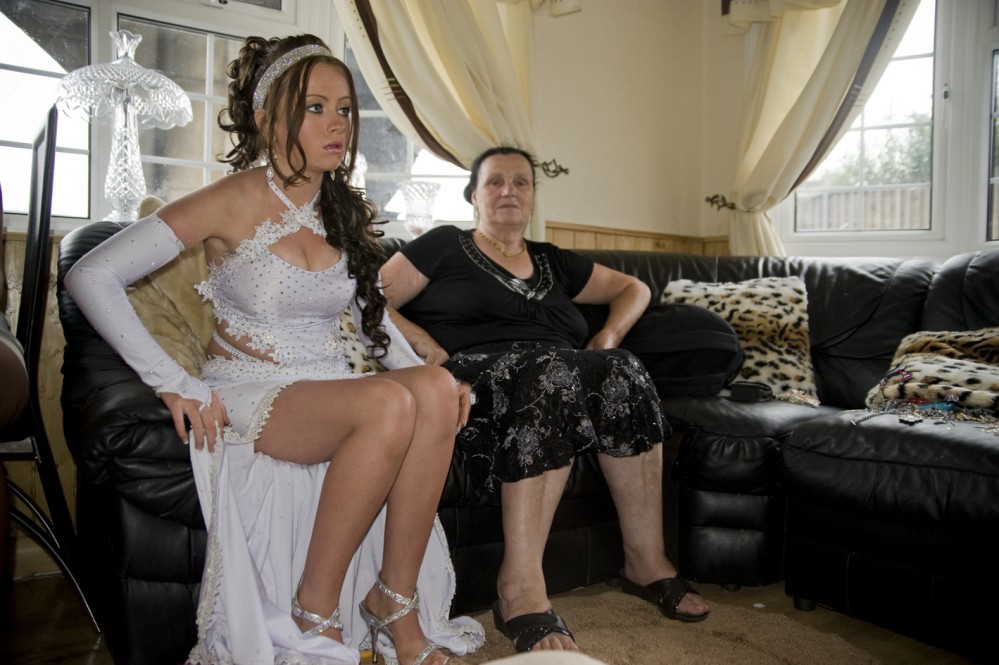 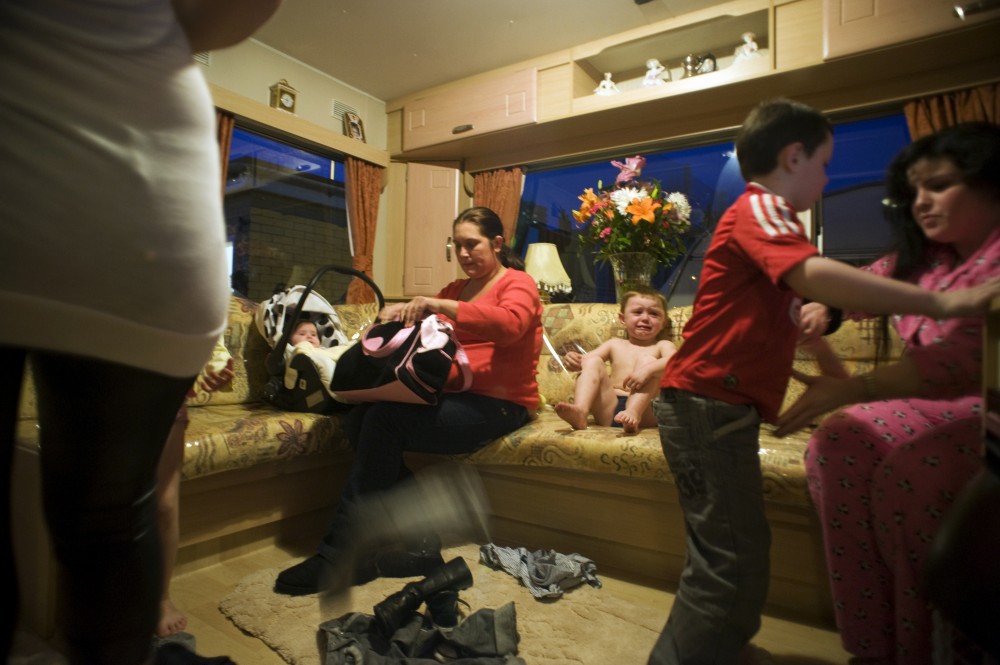 20 of 25 © 2020 Helen Twomey
Inside the trailer. Often cramped and crowded, the children play outdoors until it's too dark or too cold. 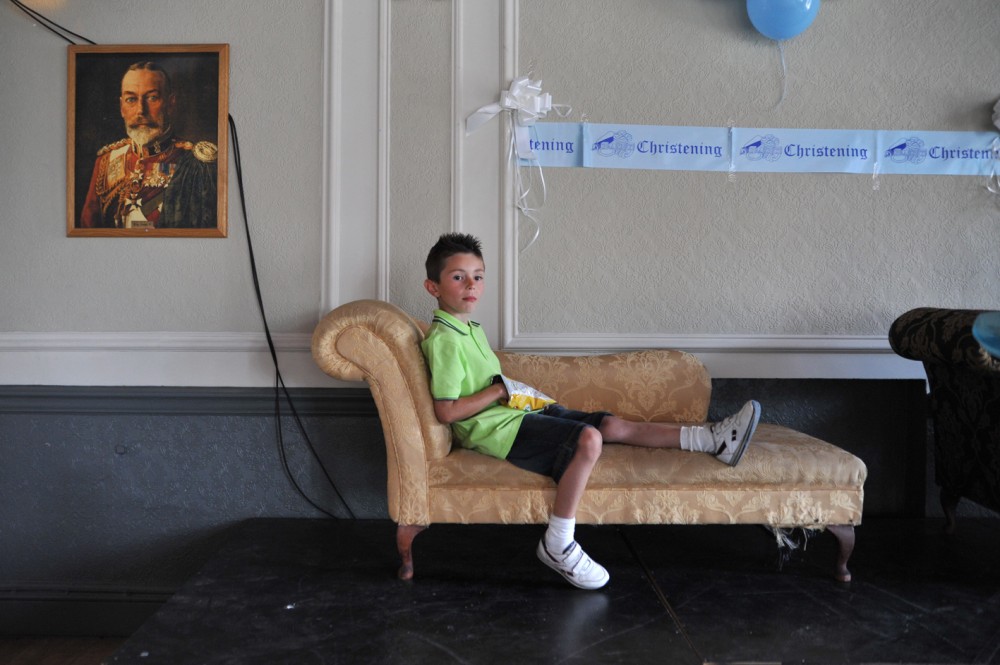 21 of 25 © 2020 Helen Twomey
John Mongan, 7, at the party for Jack’s christening. The party was held above a pub in west London. Travellers are often refused entry to venues for parties, there is a quiet discrimination against them. They must pay a large deposit to secure the venue. 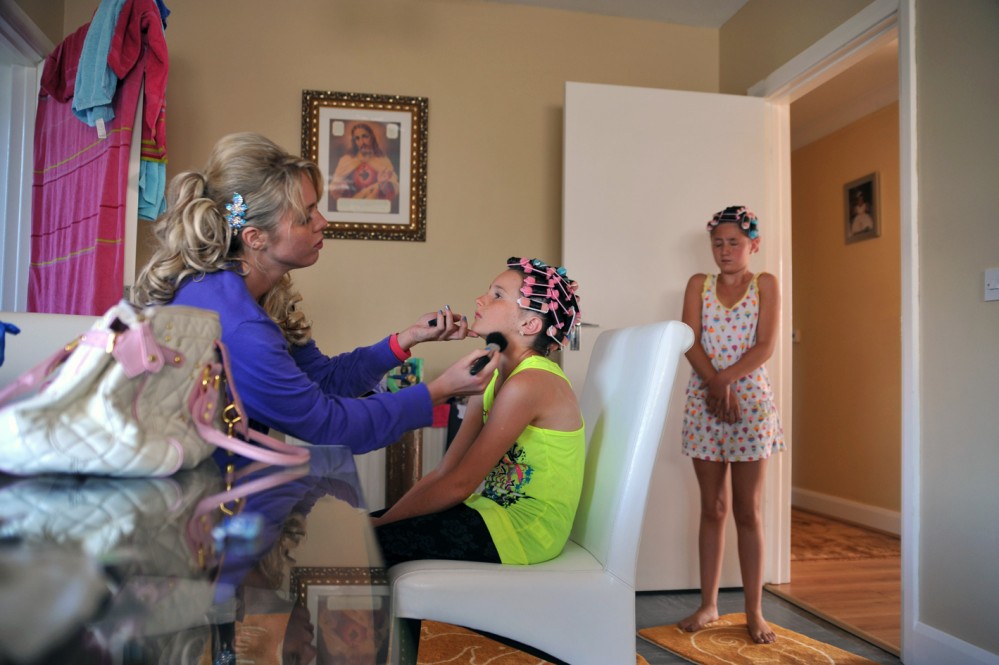 22 of 25 © 2020 Helen Twomey
Rebecca Maugham helps her younger cousins with makeup. Rebecca is 18 and planning her own wedding in a few months. 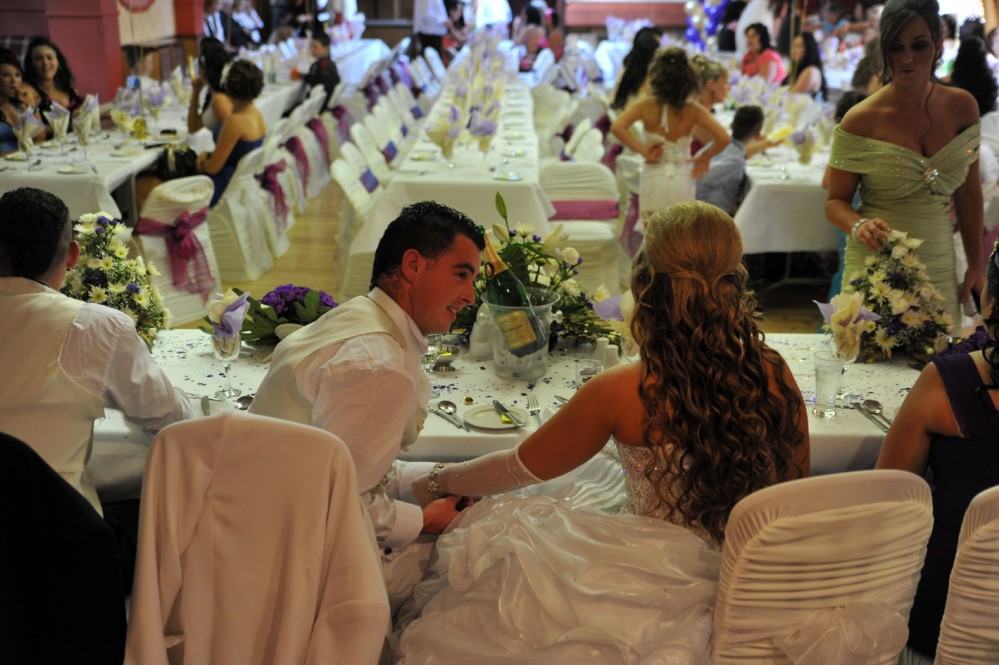 23 of 25 © 2020 Helen Twomey
Christopher Maugham with his new bride Margaret. Traveller weddings are large and expensive and represent an important bond connecting two families, as much as they are about the individual couple. 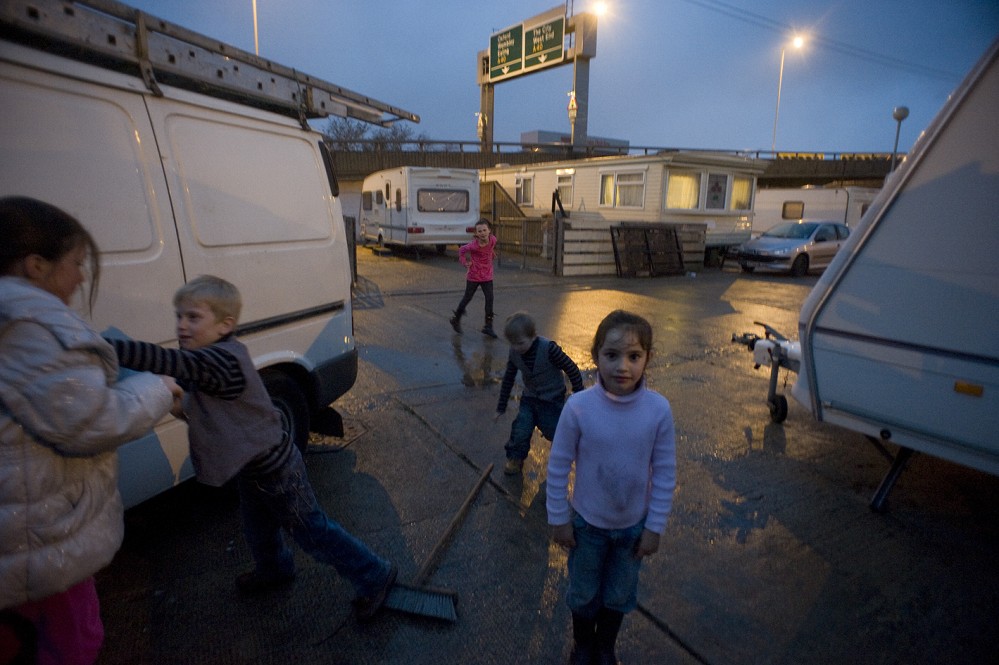 24 of 25 © 2020 Helen Twomey
Traveller children play outside on a drizzly evening in London. It is cramped and crowded inside the trailers, and they stay out as long as possible. 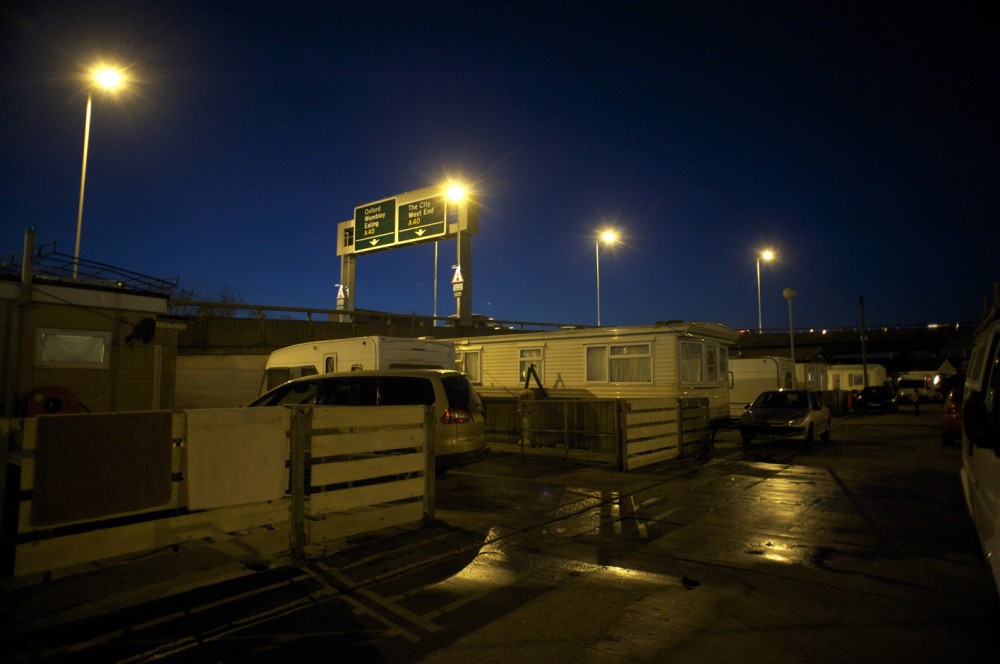 Cream-coloured camper caravans fill the tight space along both sides of the dead-end street. 20 allocated bays in 200 metres of hard grey gravel, devoid of grass, trees, flowers, lamp posts, footpaths; it begins by the gates of the scrap yard, and ends abruptly with a high fence, no room to turn cars.

This street is hidden under the Westway motorway in central London, and is home to the multi-generational families of an Irish Traveller community. Bridget’s Brood is a documentary project that portrays the lives and traditional milestones of these close-knit families who live side by side, interdependently, with little interaction beyond their street—by desire as much as by design.

Historically nomadic, Travellers moved from town to town following the festivals. Over the centuries, the mobile way of life created a tight community, made stronger by exclusion and marginalisation from mainstream society. Today, the practicalities of the itinerant lifestyle have largely given way to the reality of the modern world; however, the desire to live together with the extended family remains, and the longing to wander, if not exercised, is deeply rooted.

Among the challenges facing Travellers are poverty and racism and poor living conditions. They are undereducated and underemployed, with a life expectancy lower than the national average in UK and Ireland. Traveller families are often large, with fewer older members. Many couples marry and start their own familes when they are teenagers.

This project came about because I am interested in the strength of the family ties within this community, and how their traditional way of life has survived over the centuries despite modernisation and the potential impact of integration with surrounding communities. There’s a sense of ancestral clannishness for Irish Travellers, and a strong sisterhood feel, where gender roles are defined by traditional values. And, as with any community, there are hierarchies, both within the community, and in relation to other communities. The cultural identity is deeply rooted. A Traveller will recognise another.

Long established traditions and strong catholic beliefs weave their way into daily life. Weddings, christenings and funerals bring the more distant family members together like old friends, often taking them back and forth to Ireland. The importance of these customs and celebrations unite families in a 21st century world, where there is a tendency towards a smaller, more fractured family life.