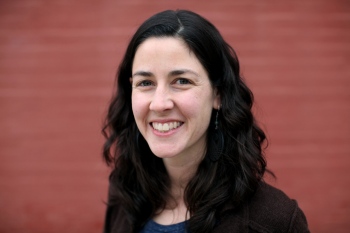 Coburn Dukehart has spent more than 18 years pursuing the craft of photojournalism and multimedia storytelling. Sheâ€™s originally from Washington, DC (yes, in the city!), and has recently resettled with her family in Madison, Wisconsin. Sheâ€™s lived in Madison, Door County, Wis., London, Boston, Columbia, Mo., New York, and DC, not necessarily in that order.
She is currently the Digital and Multimedia Director for the Wisconsin Center for Investigative Journalism.
Prior to that, she was a Senior Photo Editor at National Geographic. She also worked at NPR for six years as the Picture and Multimedia Editor. There, a regular day at work could have her shooting pictures, doing photo research, editing multimedia, planning for long-term projects, making assignments, writing for blogs, training reporters, or working with the legal, design, and news departments.
She has also worked as a photo editor and multimedia producer at usatoday.com, a photo editor at washingtonpost.com, and interned in the White House photo office. She has a masterâ€™s degree in photojournalism from the University of Missouri, and is the recipient of editing awards from the Webbys, WHNPA, NPPA, and POYi, and has been nominated for a national Emmy.
Coburn loves any software with a timeline. She loves good portraiture. And she loves well written captions and organized spreadsheets. In her spare time, she does yoga, brews kombucha, uses sidewalk chalk and hangs out with her husband, Brad Horn, and two little girls. Sheâ€™s a pretty happy camper most of the time.
Coburn has coached at various multimedia workshops, including Eddie Adams, the NPPA Flying Short Course, the NPPA Immersion workshop, and the Syracuse Fall Workshop.
Most importantly, she loves looking for new adventures, so feel free to send any her way!